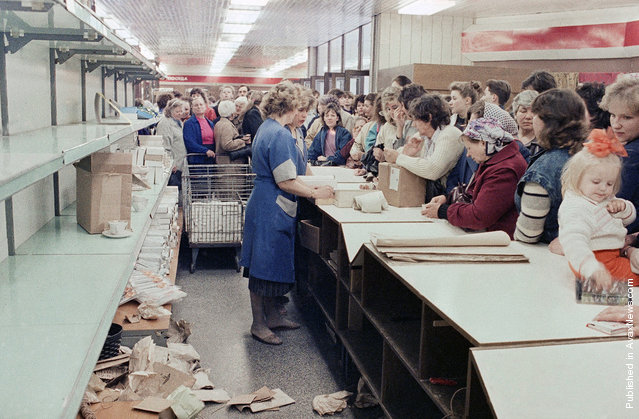 People buy teacups in the Vilnius downtown shop on Friday, April 27, 1990. Despite an economic blockade of Lithuania by Soviet forces, shops in Vilnius are well supplied with food and other goods as Lithuania entered the 10th day of a blockade. (AP Photo/Dusan Vranic) 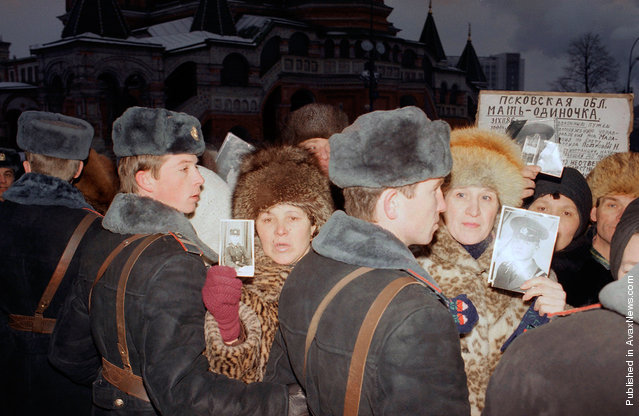 Soviet mothers who lost their sons in the Red Army are held back by State militia as they hold photographs of their loved ones in Red Square, on Monday, December 24, 1990. A group of about 200 Soviet parents who have all lost sons through ethnic violence and accidents within the Soviet armed services demonstrated outside the Kremlin. 6,000 Soviet service men were killed during 1990. (AP Photo/Martin Cleaver) 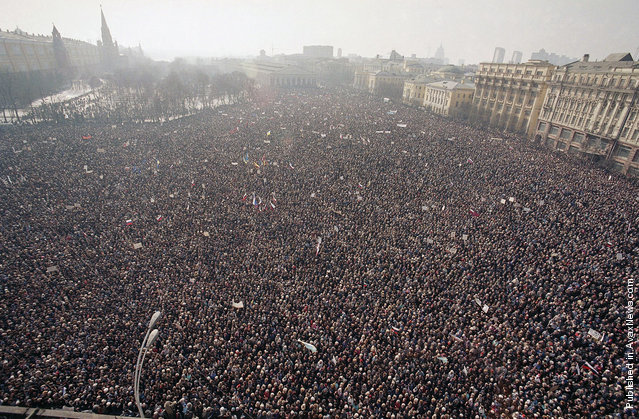 Hundreds of thousands of protesters pack Moscow's Manezh Square next to the Kremlin, on March 10, 1991, demanding that Soviet President Mikhail Gorbachev and his fellow Communists give up power. The crowd, estimated at 500,000, was the biggest anti-government demonstration in the 73 years of since the Communists took power, and came a week before the nationwide referendum on Gorbachev's union treaty. (AP Photo/Dominique Mollard) 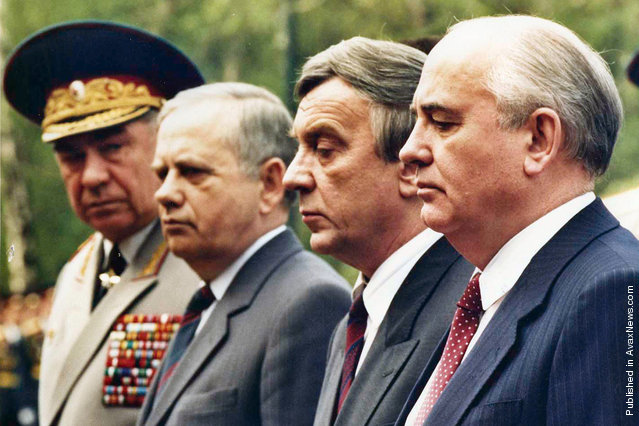 A few weeks before the Coup, Mikhail Gorbachev stands surrounded by his so-called friends, all of them soon to be leaders of the August Coup against him. Vice President Gennady Yanayev, second from right, became the most visible of the Coup leaders. Here, they are lighting the flame at the tomb of the unknown soldier outside the Kremlin wall in May of 1991. (AFP/EPA/Alain-Pierre Hovasse) 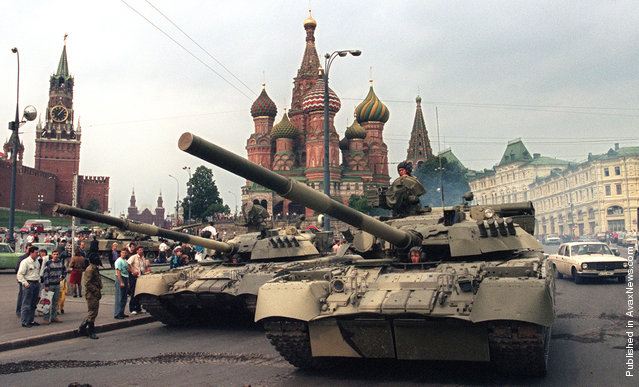 Soviet Army tanks parked near Spassky Gate, an entrance to the Kremlin and Basil's Cathedral in Moscow's Red Square after a coup toppled Soviet President Mikhail Gorbachev on August 19, 1991. Tanks rolled through Moscow towards the Russian White House, where Boris Yeltsin, leader of the Soviet-era Russian republic at the time, gathered his supporters after denouncing the coup. (Dima Tanin/AFP/Getty Images) 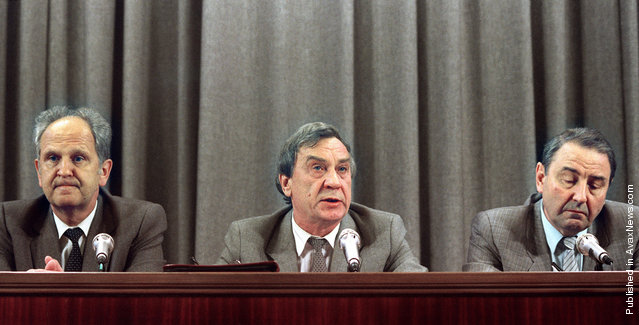 The leaders of the August Coup: from left, Soviet Interior Minister Boris Pugo, Soviet Vice President Gennady Yanayev, and Oleg Baklanov, the first Vice-President of the Soviet Defence Council. These men were members of the self-styled “committee for the state of emergency” which headed the coup against Soviet President Mikhail Gorbachev. Here, they gave a press conference on August 19, 1991 in Moscow. (Vitaly Armand/AFP/Getty Images) 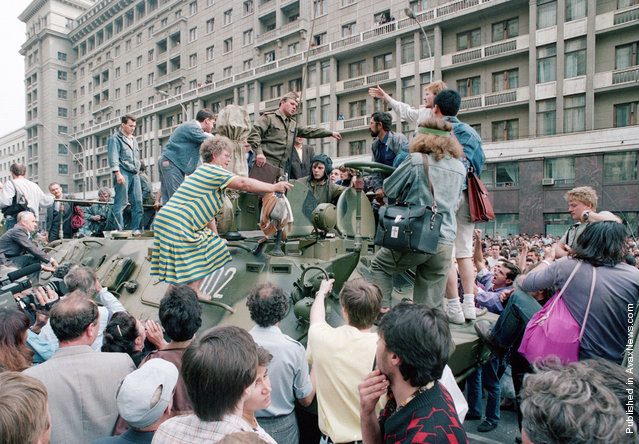 A crowd gathers around a personnel carrier as some people climb aboard the vehicle and try to block its advance near Red Square in downtown Moscow, on August 19, 1991. Military vehicles were on the streets of Moscow following the announcement that Soviet President Mikhail Gorbachev was replaced by Gennady I. Yanayev in a coup attempt by hard-line Communists. (AP Photo/Boris Yurchenko) 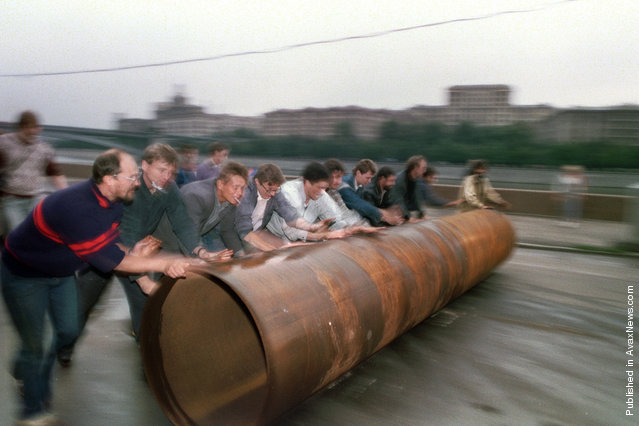 Supporters of Russian president Yeltsin roll a large metal pipe to use as a barricade near the Russian federation building in Moscow, on August 19, 1991, following a military coup attempt by Soviet hardliners. (Anatoly Sapronyenkov/AFP/Getty Images) 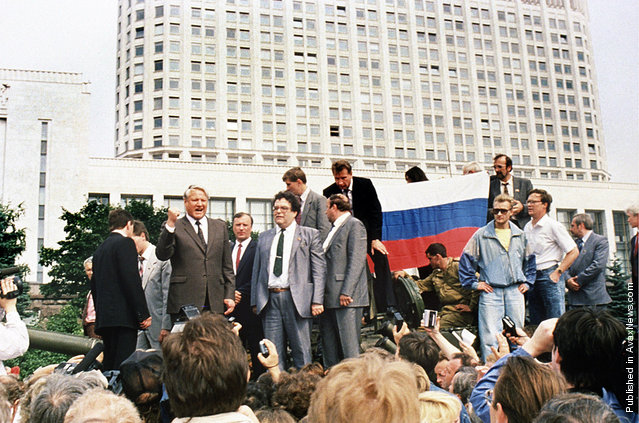 Russian President Boris Yeltsin (left) stands on top of an armored vehicle parked in front of the Russian Federation building as supporters hold a Russian federation flag on August 19, 1991, during a coup attempt. Yeltsin addressed a crowd of supporters calling for a general strike. (Diane-Lu Hovasse/AFP/Getty Images) A picture shows Soviet President Mikhail Gorbachev speaking in a video message taped on August 19, 1991, the second day of his captivity. Gorbachev said there had been an unconstitutional coup and that he was completely well. Photo taken on August 25, 1991. (NBC TV/AFP/Getty Images) 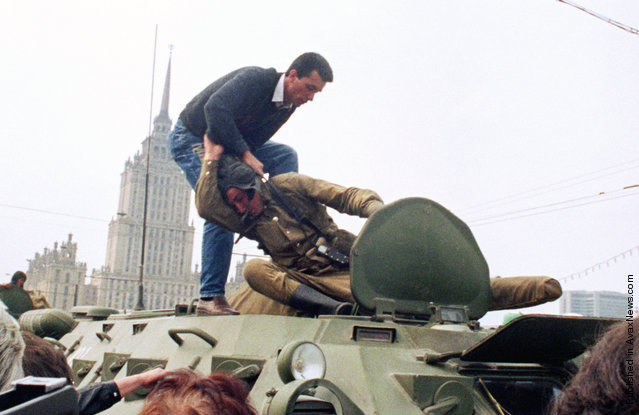 A pro-democracy demonstrator fights with a Soviet soldier on top of a tank parked in front of the Russian Federation building on August 19, 1991, after a coup toppled Soviet President Mikhail Gorbachev. The same day, thousands in Moscow, Leningrad, and other cities answered Russian Republic President Boris Yeltsin's call to raise barricades against tanks and troops. (Dima Tanin/AFP/Getty Images) 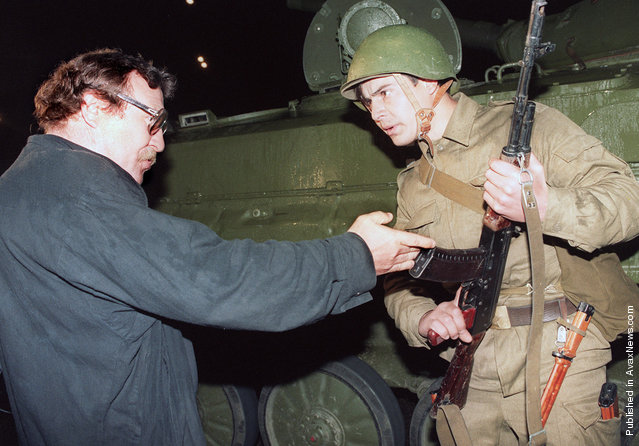 A pro-democracy demonstrator argues with a Soviet soldier late on August 20, 1991, as a tank blocked access to the center of Moscow. (Andre Durand/AFP/Getty Images) 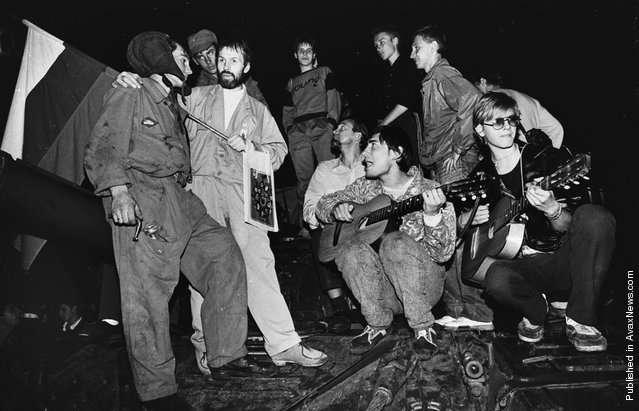 Residents play music and talk to soldiers in front of the Russian White House in central Moscow early on August 20, 1991. (Alexander Nemenov/AFP/Getty Images) 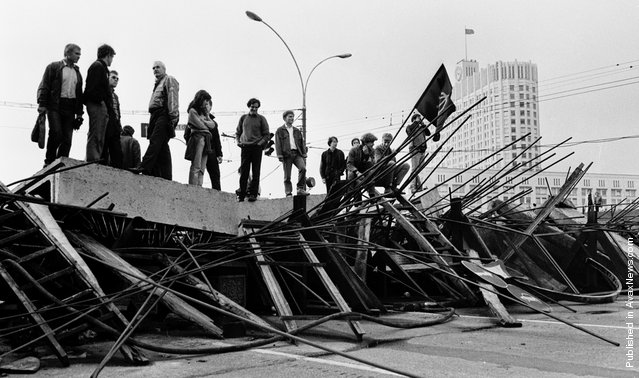 People stand on a barricade in front the Russian White House in Moscow on August 21, 1991. (Alexander Nemenov/AFP/Getty Images) 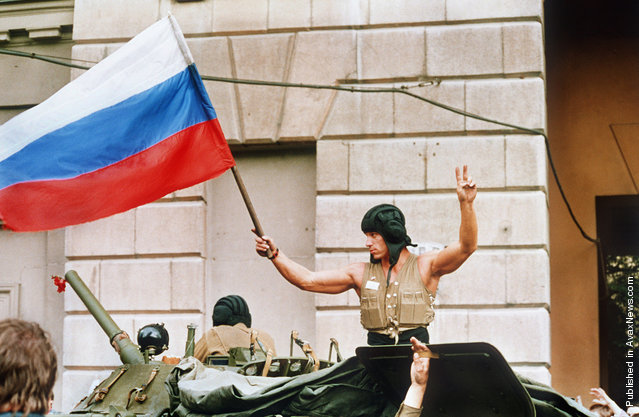 A soldier waves a Russian flag from the top of his tank as armored units leave their positions in Moscow following the collapse of the military coup against president Gorbachev on August 21, 1991. Coup leaders fled the capital and president Gorbachev was rumored to be returning soon. (Willy Slingerland/AFP/Getty Images) 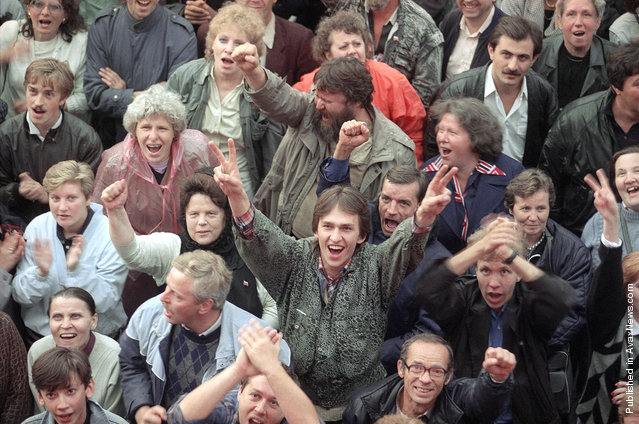 Part of a large crowd, outside the Russian Parliament building in Moscow, celebrates the news that the hardline Communist coup has failed, on August 22, 1991. (AP Photo) 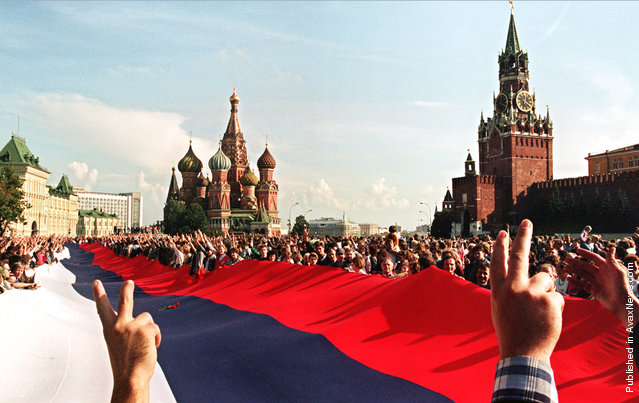 Celebrations in Moscow after the failure of the coup attempt, and remembrances of those killed in the violence, in August of 1991. (AFP/EPA/Alain-Pierre Hovasse) 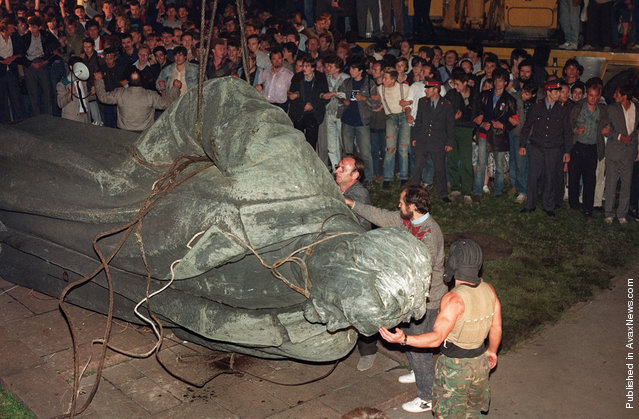 A crowd watches the statue of KGB founder Dzerzhinsky being toppled in Lubyanskaya Square in Moscow, on August 22, 1991. (Anatoly Sapronenkov/AFP/Getty Images) 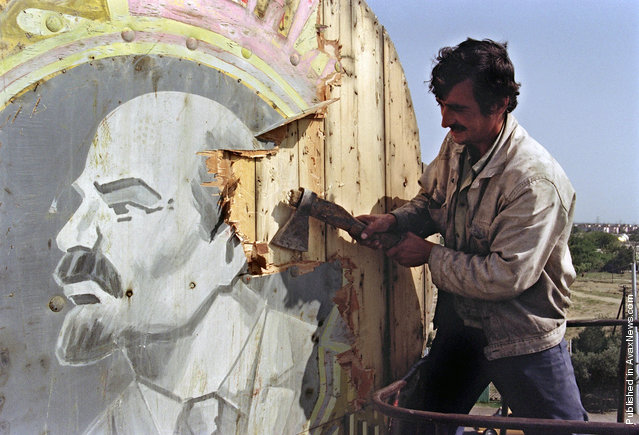 A Baku resident uses an axe to hack apart a placard showing a portrait of Russian Bolshevik revolutionary leader Vladimir Lenin, on September 21, 1991. Azerbaijan was proclaimed a Soviet Socialist Republic by Soviet Union in 1920. The Azeri National Council voted for its declaration of independence in 1991. (Anatoly Sapronenkov/AFP/Getty Images) 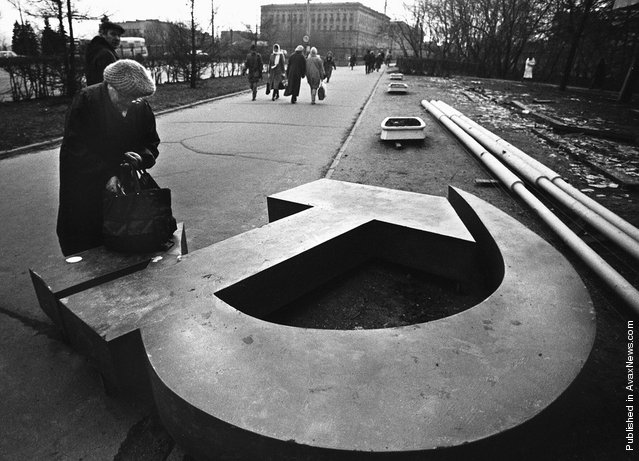 A woman reaches into her bag, which rests on a fallen Soviet hammer-and-sickle on a Moscow street in 1991. December 25, 2011 will mark the 20th anniversary of the fall of the Soviet Union. (Alexander Nemenov/AFP/Getty Images) 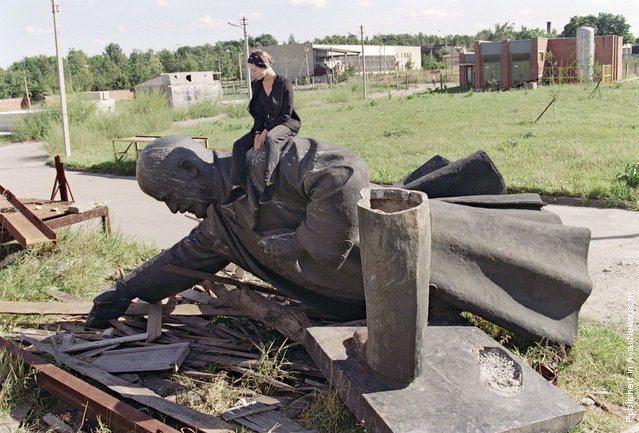 A young Lithuanian girl sits on the toppled statue of Russian Bolshevik revolutionary leader Vladimir Lenin in Vilnius after the monument was removed from the center of the Lithuanian capital, on September 1, 1991. (Gerard Fouet/AFP/Getty Images) 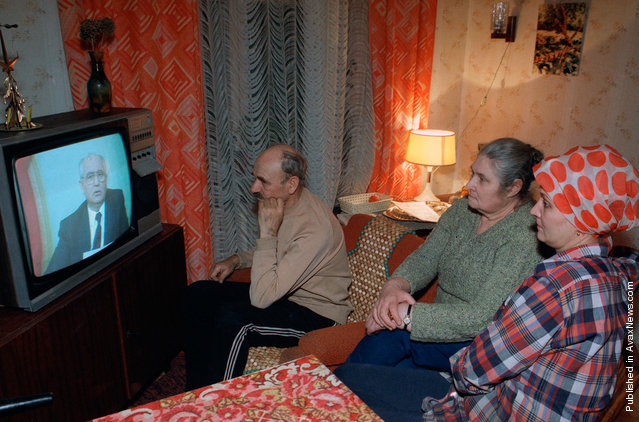 The Musichick family watches Soviet President Mikhail Gorbachev's resignation speech on Soviet television in their downtown Moscow apartment, on December 25, 1991. Gorbachev, whose reforms gave Soviet citizens freedom but ultimately led to the destruction of his nation resigned on as President of a Communist empire that no longer exists. (AP Photo/Sergei Kharpukhin) 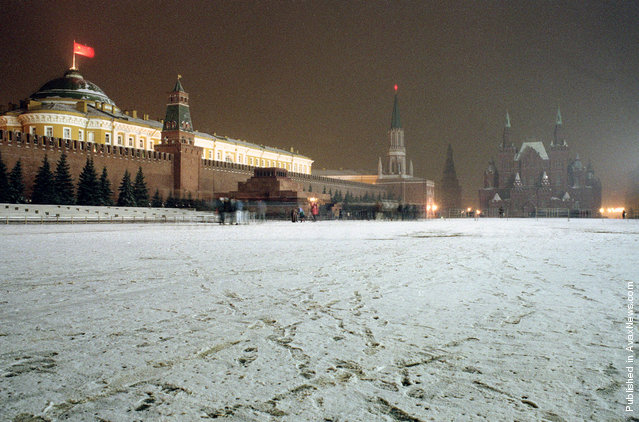 For one of the last times, the Soviet flag flies over the Kremlin at Red Square in Moscow, on Saturday night, December 21, 1991. The flag was replaced by the Russian flag on New Year's. (AP Photo/Gene Berman)
Edit Del
06 Apr 2012 20:07:00, post received 0 comments
Publication archive:
←   →
Popular tags:
All tags
Last searches: