Educative “Vintage Photoshop” or The Spirit Photographs Of William Hope
“William Hope (1863 – 8 March 1933) was a pioneer of so-called “spirit photography” (spirit photography is a type of photography whose primary attempt is to capture images of ghosts and other spiritual entities, especially in ghost hunting). Based in Crewe, England, he was a member of the well known spiritualists group, the Crewe Circle.

On 4 February 1922, the Society for Psychical Research and the paranormal investigator Harry Price attempted to prove that Hope was a fraud during tests at the British College of Psychic Science.

Price secretly marked Hope's photographic plates, and provided him with a packet of additional plates that had been covertly etched with the brand image of the Imperial Dry Plate Co. Ltd. in the knowledge that the logo would be transferred to any images created with them. Unaware that Price had tampered with his supplies, Hope then attempted to produce a number of Spirit photographs. Although Hope produced several images of spirits, none of his materials contained the Imperial Dry Plate Co. Ltd logo, or the marks that Price had put on Hope's original equipment, showing that he had exchanged prepared materials containing fake spirit images for the provided materials.

Price later re-published the Society's experiment in a pamphlet of his own called Cold Light on Spiritualistic “Phenomena” – An Experiment with the Crewe Circle.

In 1932, Fred Barlow, a former friend and supporter of Hope's work and also the former Secretary of the Society for the Study of Supernormal Pictures, along with Major W. Rampling-Rose, gave a joint lecture to the Society for Psychical Research to present findings gleaned from an extensive series of tests on the methods Hope used to produce his spirit photographs.

Barlow and Rampling-Rose concluded that the “spirit extras” that appeared in Hope's photographs were produced fraudulently. The pair would later present their case in depth in the Proceedings of the Society for Psychical Research.

Despite Price's findings, Hope still retained a noted following, including author and spiritualist Sir Arthur Conan Doyle who refused to accept any evidence that Hope was a fraud and went to great lengths to clear his name, going so far as to write a book supporting spirit photography, The Case for Spirit Photography, in response to Price's claims of fraud and trying to convince Price to withdraw his story”. – Wikipedia 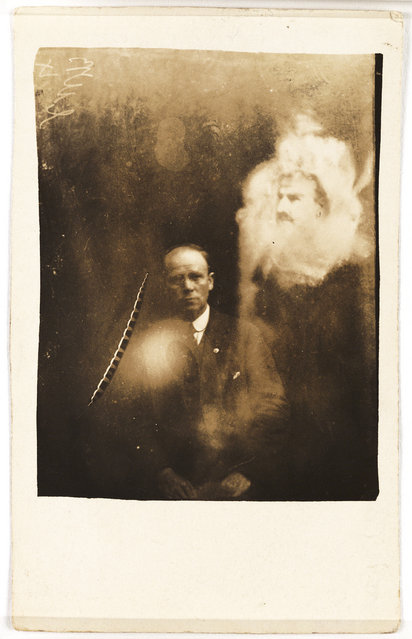 A clergyman and two spirits. The clergyman and his wife had attended a seance at which a voice was heard, claiming to be their stillborn daughter – whom the “spirit people” had named Rose. The voice asked them to sit for a psychic photograph, telling them she would try to appear in it. 'Rose' is not clearly apparent in the image. The image of the man was identified as the long-deceased father of the clergyman. 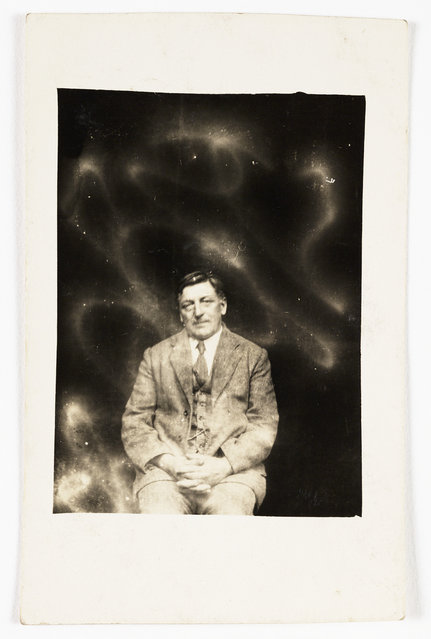 A Man surrounded by signs of spirit presence. 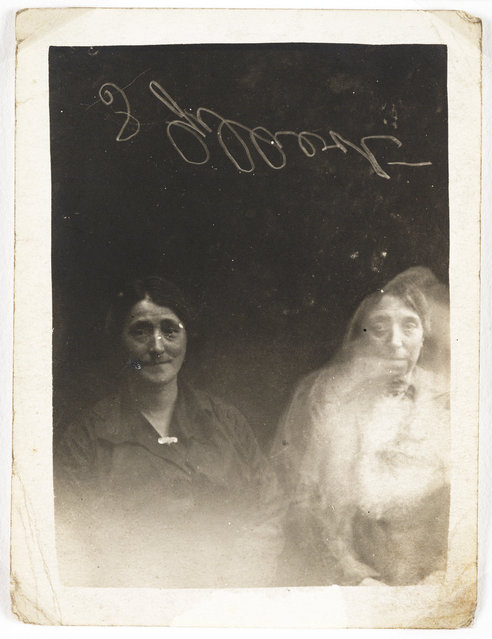 Two women with a spirit. The face of a young woman appears over the woman on the right of the photograph. The reverse of the photograph reads: “Why is the child always pushing to the front?” and “Do we get messages from the higher spirits?”; perhaps questions the women wanted answering. One of the sitters, at Hope's request, has signed the plate for authentication. 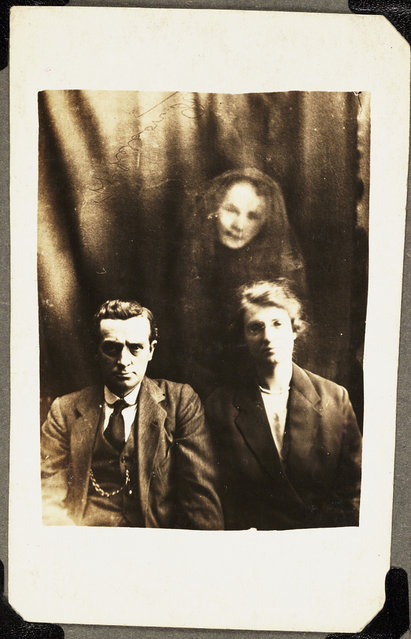 Couple with a female spirit. A woman's face appears above the couple – identified at the time as the sister of a man prominent in the Spiritualist Church. Her cloak adds to the ethereal effect. The signature in the upper left hand corner is by one of the sitters, to authenticate the plate. The couple are the parents of the person who compiled the spirit album. 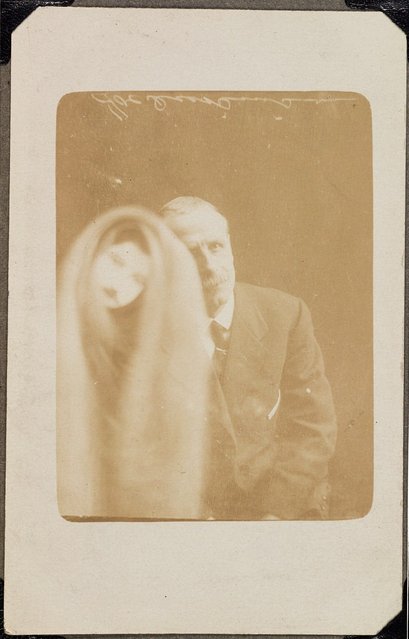 A Man with a female spirit. 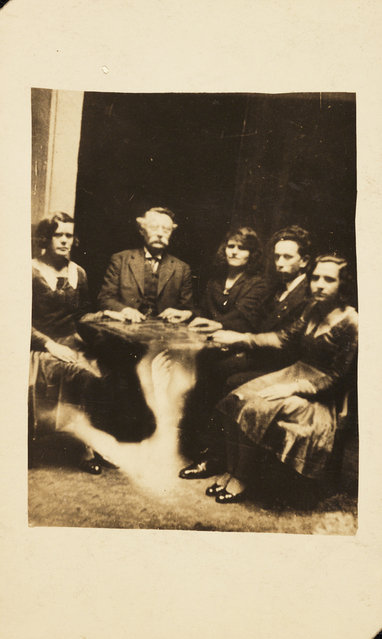 A seance. A photograph of a group gathered at a seance, taken by William Hope in about 1920. The information accompanying the spirit album states that the table is levitating. In reality, the image of a ghostly arm has been superimposed over the table using a double exposure. 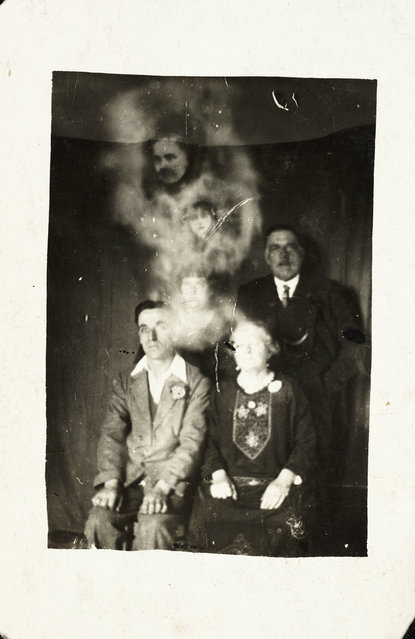 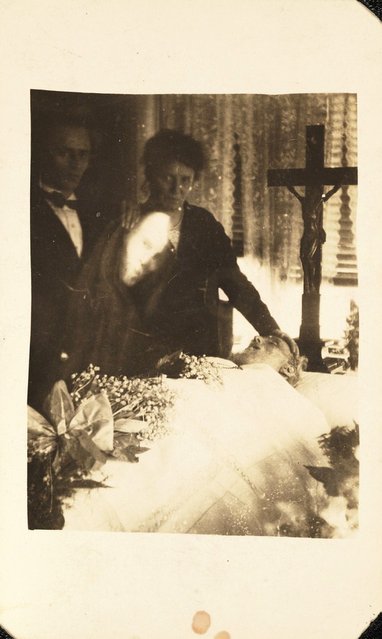 Mourning scene. A photograph of a mourning scene, probably taken by William Hope in about 1920. A woman mourns for her husband in a Chapel of Rest, standing by his body which is wrapped in sheets and laden with flowers. The woman's son stands beside her. The image of a man's face has been superimposed over the original photograph. The spirit album notes that the family were Roman Catholics and believed in life after death. 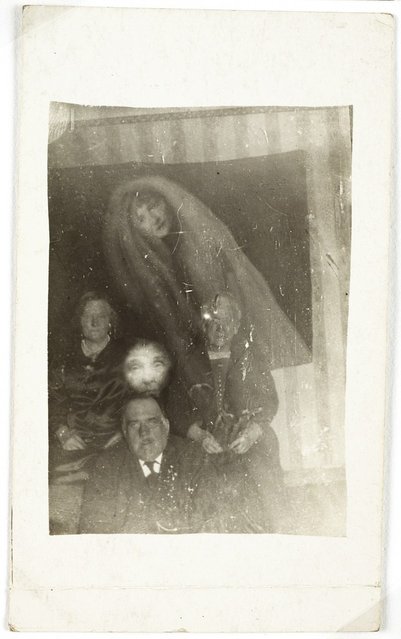 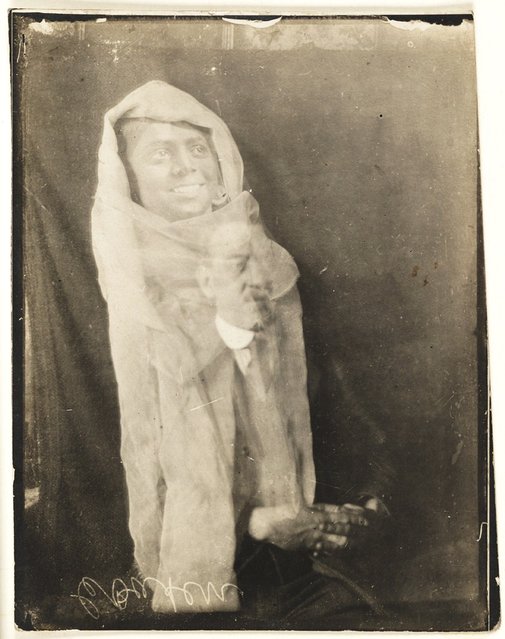 A man with the spirit of his helper. The image of a young man's face appears prominently over the man, draped in a cloak. The signature at the base of the image belongs to the sitter. The man had links with the person who compiled the spirit album, and he gave the photograph to her as a keepsake. He apparently recognised the young man's face. 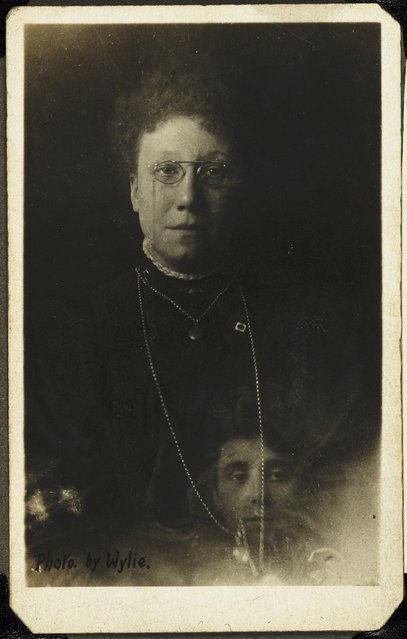 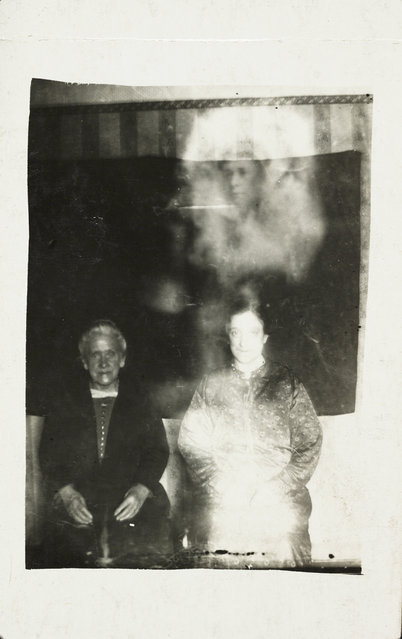 Two women with a female spirit. 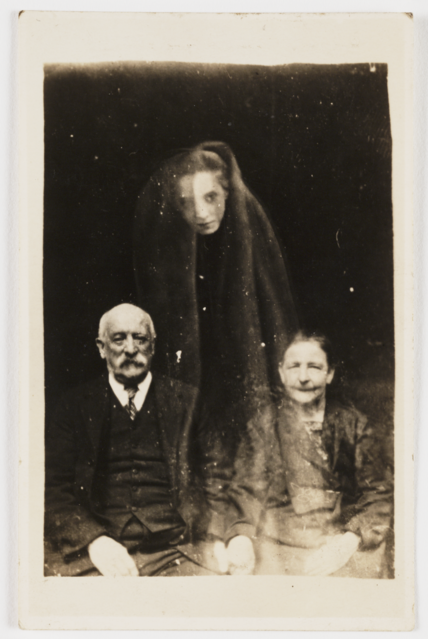