Fact A Look Back at U.S. Combat Missions in Iraq 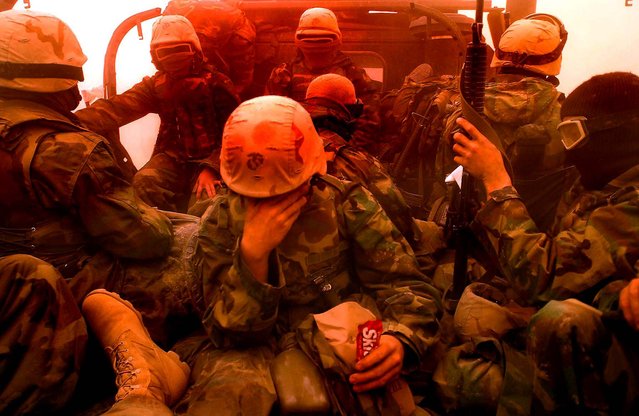 Members of the Ist U.S. Marine Division struggle with a sandstorm, Tuesday, March 25, 2003 on a highway leading to Baghdad. (Photo by James Hill/The New York Times) 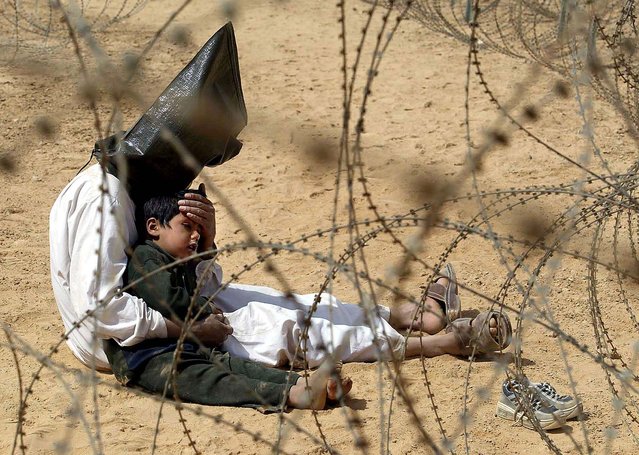 An Iraqi man comforts his 4-year-old son at a regroupment center for POWs of the 101st Airborne Division near An Najaf, Iraq, March 31, 2003. The man was seized in An Najaf with his son and the U.S. military did not want to separate them. (Photo by Jean-Marc Bouju/Associated Press) 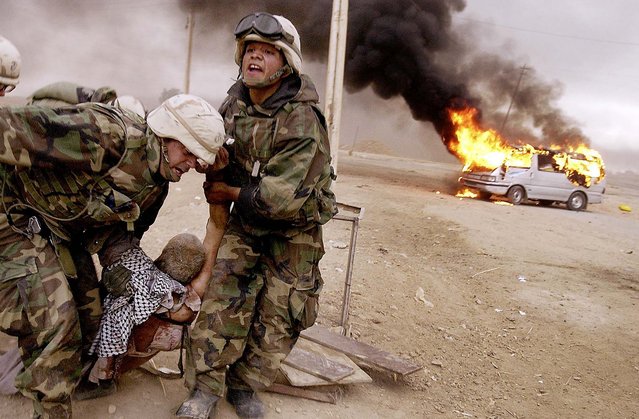 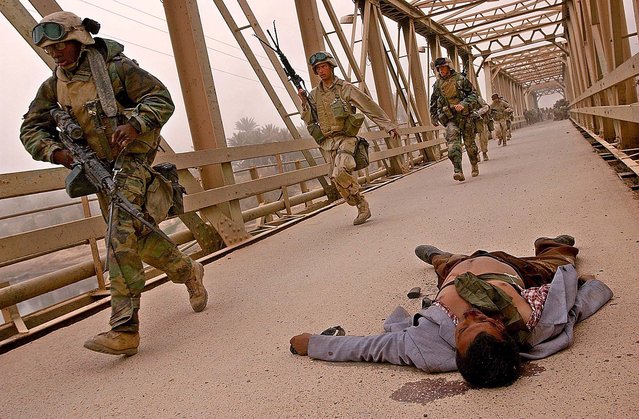 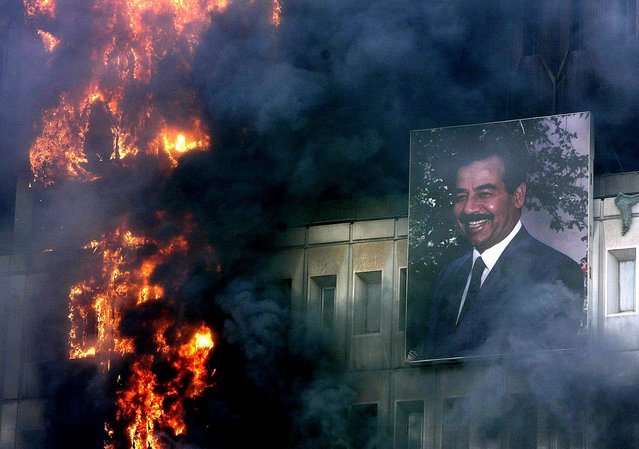 A portrait of Saddam Hussein hangs on the burning Ministry of Transport and Communication building in Baghdad Wednesday, April 9, 2003. (Photo by Jerome Delay/Associated Press) 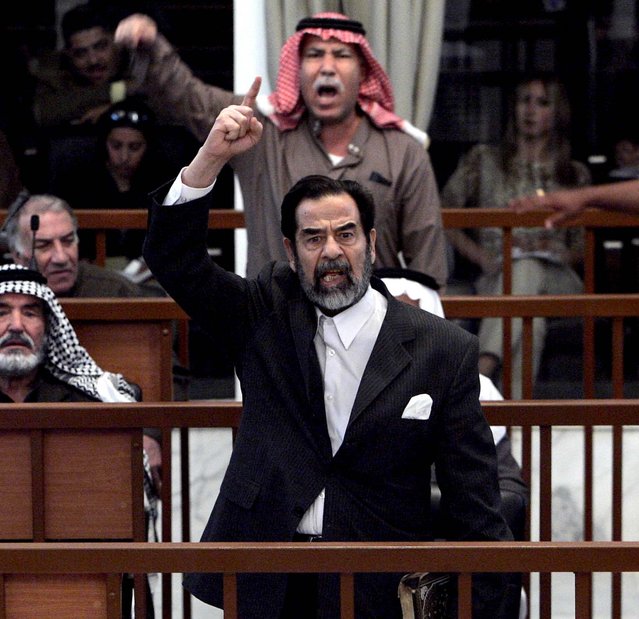 Former Iraqi President Saddam Hussein and Barzan Ibrahim al-Tikriti berate the court during their trial in Baghdad, Monday Dec. 5, 2005. On Nov. 5, 2006, Hussein was sentenced to hang for crimes against humanity. (Photo by David Furst/Pool/Associated Press) 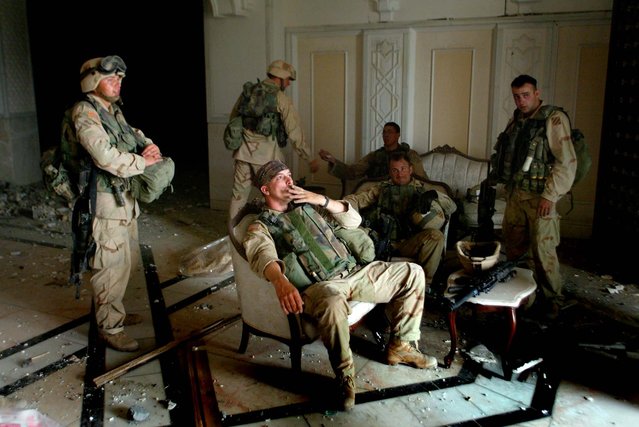 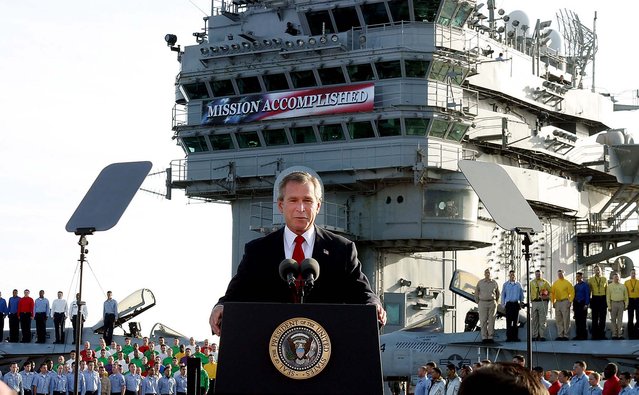 President George W. Bush declares the end of major combat in Iraq as he speaks aboard the aircraft carrier USS Abraham Lincoln off the California coast, May 1, 2003 file photo. (Photo by J. Scott Applewhite/Associated Press) 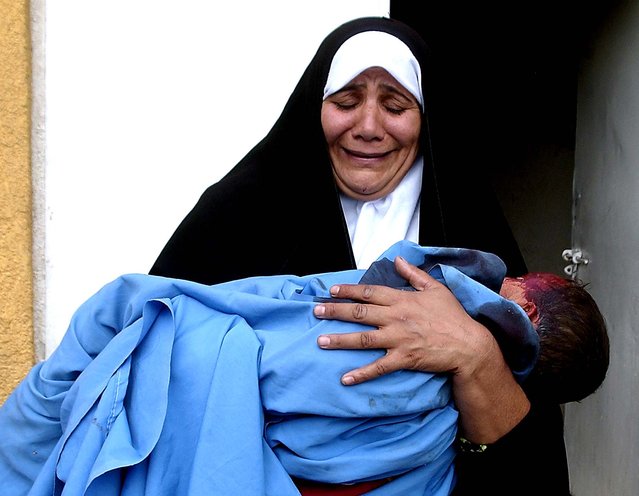 A woman holds the lifeless body of her two-year-old grandson outside Baqouba's hospital, 35 miles northeast of Baghdad, Oct. 31 2006. The United Nations said that 3,709 Iraqi civilians were killed in October, the highest monthly toll since the March 2003 U.S. invasion and another sign of the severity of Iraq's sectarian bloodbath. (Photo by Mohammed Adnan/Associated Press) 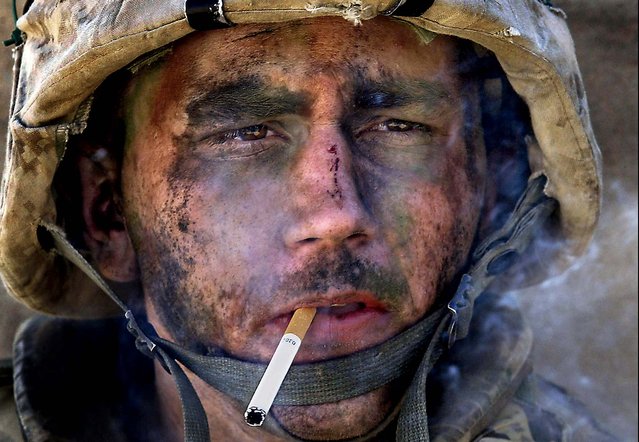 Marine Lance Cpl. James Blake Miller, 20, of Kentucky, a member of Charlie Company of the U.S. Marines First Division, Eighth regiment, smokes a cigarette in Fallujah, Iraq, Nov. 9, 2004. Miller came to be known as the “Marlboro Man” for this iconic photograph from the Iraq War. (Photo by Luis Sinco/Los Angeles Times) 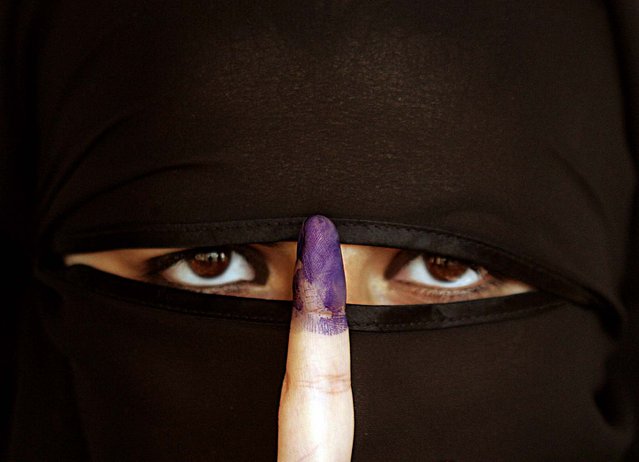 An Iraqi Sunni woman shows her ink-stained finger after casting her vote in Amman December 15, 2005. Only scattered insurgent attacks marred Iraqs election on Thursday as disgruntled Sunni Arabs joined the vote, determined to have more say in government. (Photo by Ali Jarekji/Reuters) 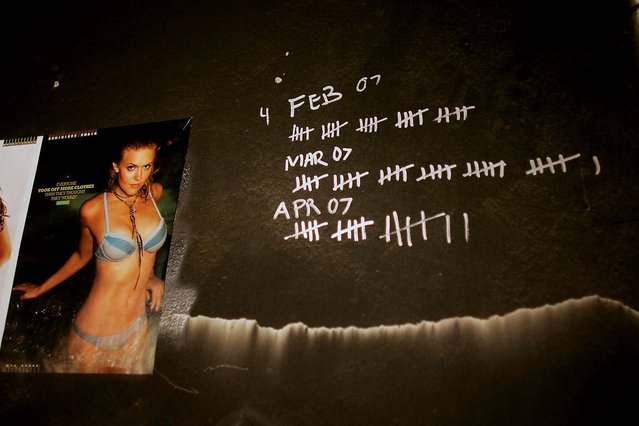 A U.S. Army soldier from B-CO 2/325 AIR 82nd Airborne Division marks on the wall the days he has spent at Command Outpost Callahan in Baghdad, April 17, 2007. The soldiers was part of the U.S. military surge, which was sent to help control the violence plagued city and country. Five U.S. combat brigades plus supporting troops, or some 30,000 soldiers, were sent to Iraq between February and mid-June 2007. Besides reducing violence, Washington wanted to create “breathing space” for Iraqi leaders to make progress on laws seen as critical to fostering national reconciliation. (Photo by Joe Raedle) 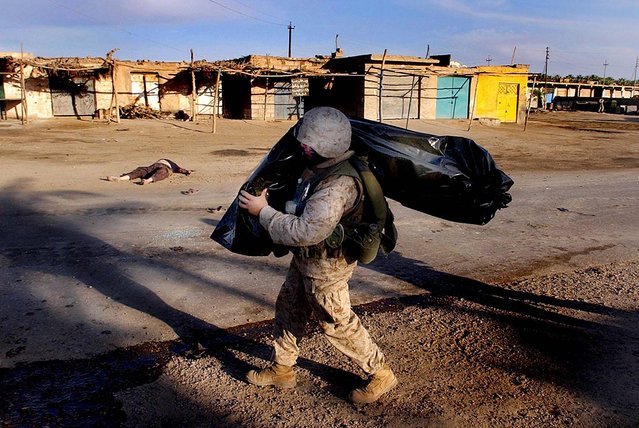 A U.S. Marine carries the body of a fellow Marine killed in action after a coordinated ambush against American troops in Ramadi, April 6, 2004. At least six Marines from Echo Company, 2nd Batallion, 4th Division, and perhaps as many as nine, died in five hours of fierce fighting at Ramadi when a multi-pronged assault caught foot patrols by surprise in broad-daylight at about 9 a.m. (Photo by David Swanson/The Phladelphia Inquirer) 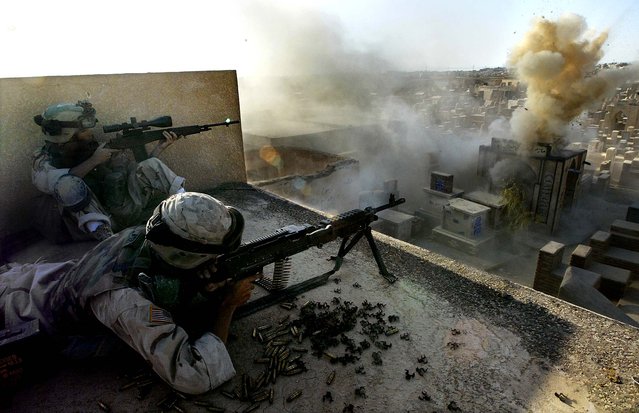 U.S. soldiers from Company C, First Battalion of the Fifth Cavalry Regiment on a rooftop in a cemetery as a round from a Bradley Fighting Vehicle hits a tomb where a sniper was suspected to be hiding, during the battle for Najaf on August 11, 2004. Najaf's Old City was devastated in the three-week standoff between U.S. forces and militiamen loyal to rebel Shiite cleric Muqtada al-Sadr. (Photo by Tyler Hicks/The New York Times) 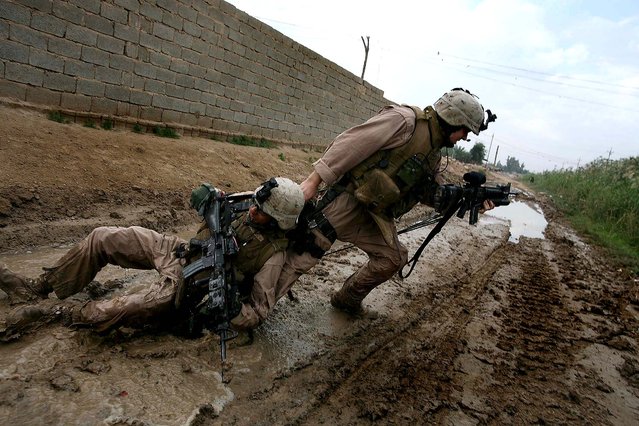 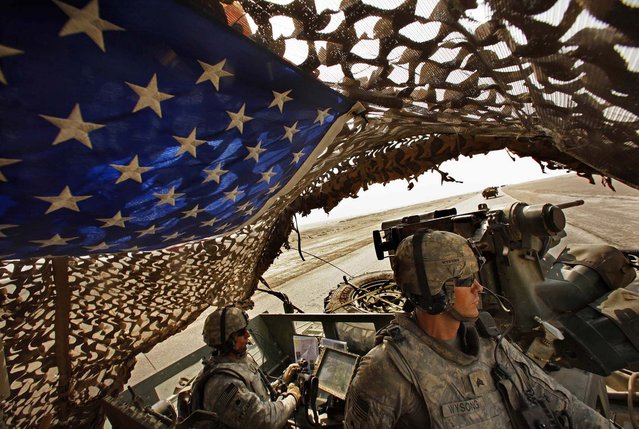