Fact A Look Back at Ukrainian Conflict 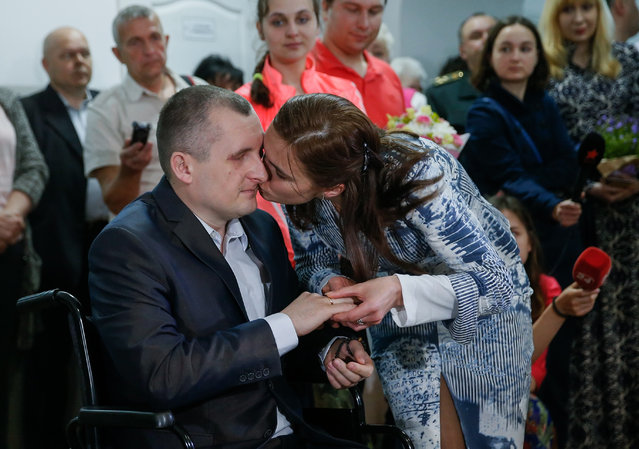 Wounded Ukrainian officer Alexander Darmoros (L) kisses his bride Elena (R), during their wedding in the central military hospital in Kiev, Ukraine, 05 May 2015. Alexander was wounded during fighting with pro-Russian militants on the East Ukraine. He lost his vision and foot in result of a trip-wire mine accident. (Photo by Sergey Dolzhenko/EPA) 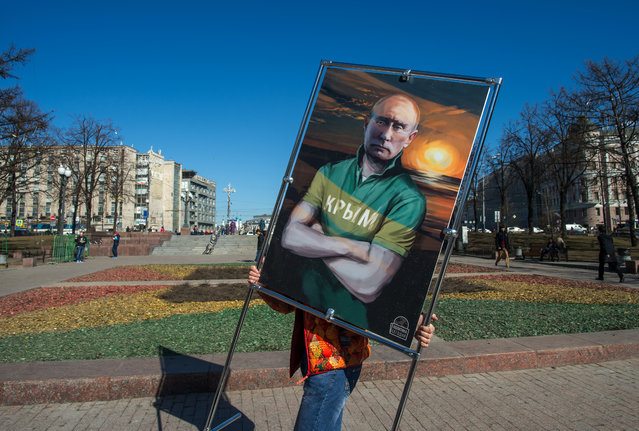 A man carries a picture depicting Russia's President Vladimir Putin in a T-shirt with an inscription reading: “Crimea” at an open-air political cartoons exhibition dedicated to the one-year anniversary of Crimea voting to leave Ukraine and join the Russian state in central Moscow on March 16, 2015. (Photo by Dmitry Serebryakov/AFP Photo) 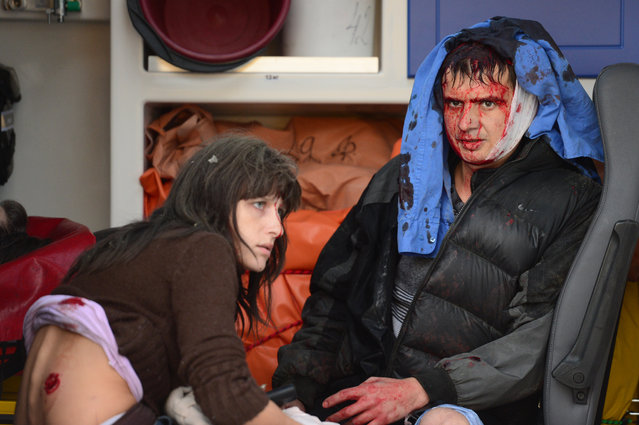 Two people sit in an ambulance waiting to be treated after a Grad rocket slammed into a shopping mall in Donetsk's Kubishevski district, in the eastern Ukraine, on October 8, 2014. At least two people were killed, and five were injured after some six Grad rockets hit the area. (Photo by John Macdougall/AFP Photo) 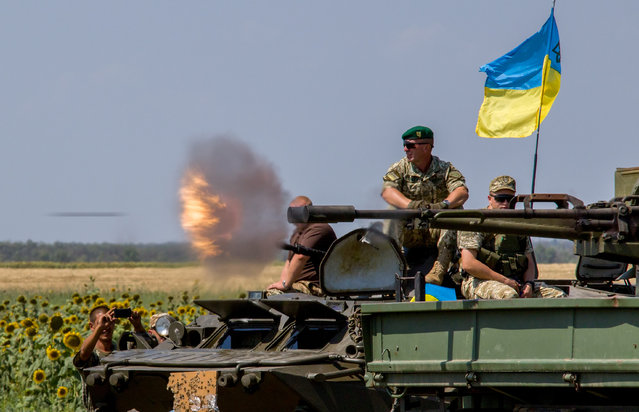 Ukrainian frontiers take part in their military exercise on a shooting range near of the Urzuf village, not far of Mariupol, Donetsk area, Ukraine, 09 August 2016. One Ukrainian soldier was killed and five were wounded in fighting in eastern Ukraine in the past 24 hours, according to Oleksandr Motuzianyk, presidential spokesman for ATO issues UNIAN agency report. (Photo by Irina Gorbasyova/EPA) 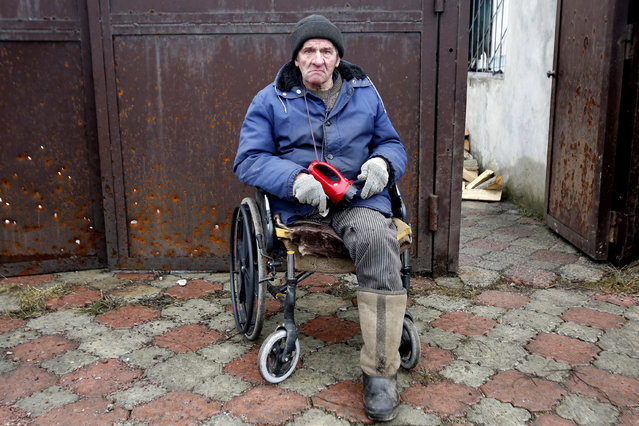 Resident Viktor Gudelya, who lost a leg during a 2014 shelling, watches firemen extinguishing a fire in his house in Avdiivka, destroyed as a result of heavy shelling by pro-Russian rebels on February 25, 2017. (Photo by Anatolii Stepanov/AFP Photo) 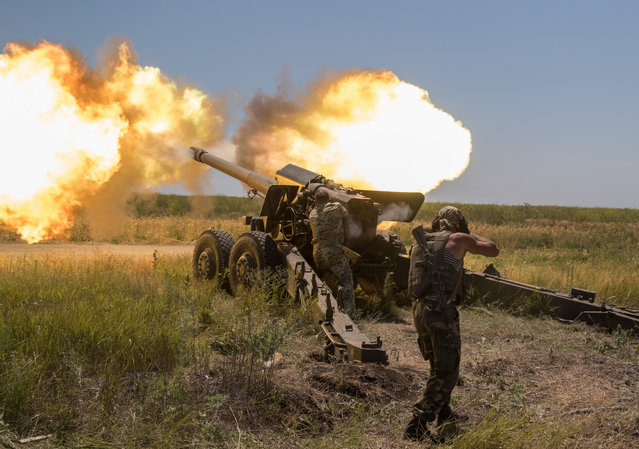 Ukrainian servicemen fire a 152 mm 2A36 Giatsint-B (M1976) 152-mm towed gun during a military exercise on a shooting range near Mariupol, Ukraine, 30 June 2017. The OSCE Special Monitoring Mission (SMM) to Ukraine evacuated its office from the town of Popasna in Luhansk region on 30 June, due to the militant shelling according to the Ukrainian side of the Joint Centre for Control and Coordination report. (Photo by Sergey Vaganov/EPA) 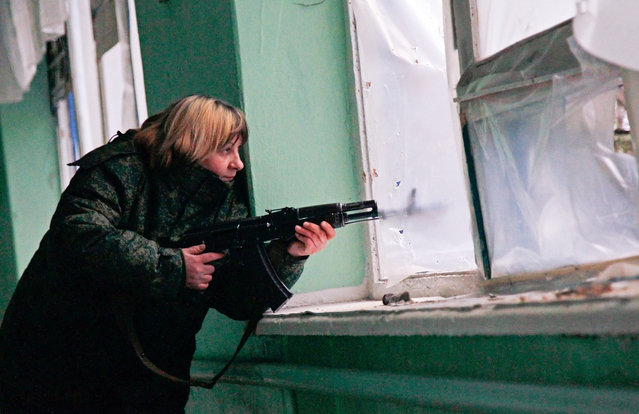 An armed pro-Russian militant holds her position inside of a damaged school in Zaytseve village of Donetsk area, Ukraine, 14 March 2016. Pro-Russian rebels attacked Ukrainian army positions at least 44 times in the past 24 hours, including 38 times in the Donetsk sector, five times in the Mariupol sector and once in the Luhansk sector, the press center of the Anti-Terrorist Operation (ATO) reported. (Photo by Alexander Ermochenko/EPA) 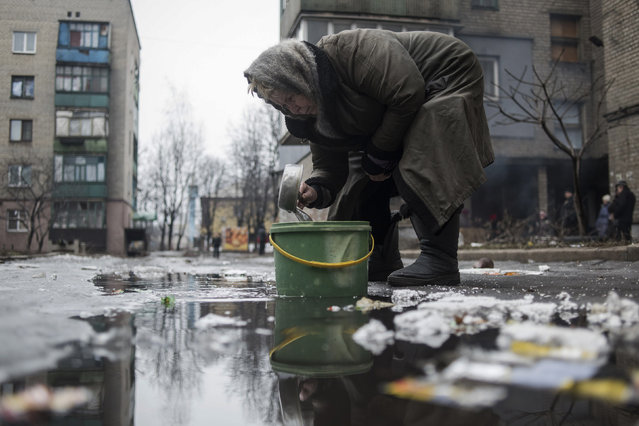 An elderly woman collects water from a puddle in Debaltseve, February 3, 2015. Five Ukrainian soldiers have been killed and 27 wounded in fighting with pro-Russian separatists in Ukraine's eastern regions in the past 24 hours, Kiev military spokesman Andriy Lysenko said on Tuesday. Ukrainian military say fighting has been particularly intense around the town of Debaltseve, a major rail and road junction northeast of the city of Donetsk, which government troops are still holding. (Photo by Sergey Polezhaka/Reuters) 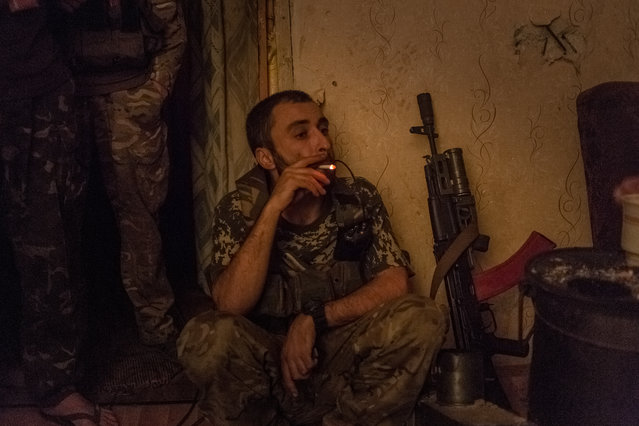 “Aram”, the commander of Jewish Squad is having his smoke during night shift guard in Mariinka, Ukraine on October 4, 2016. (Photo by Anton Skyba) 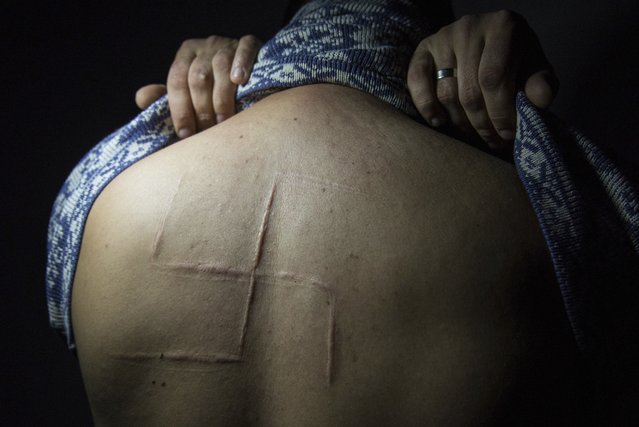 In this photo taken on Wednesday, October 9, 2019, Bogdan Sergiets, former resident of Donetsk, shows a swastika scar on his back in a photographer's studio in Kyiv, Ukraine. Sergiets was captured by Russia-backed rebels in his workplace in Donetsk, he spent 10 hours in captivity, tortured and beaten, and his captors engraved the swastika on his back. (Photo by Zoya Shu/AP Photo) 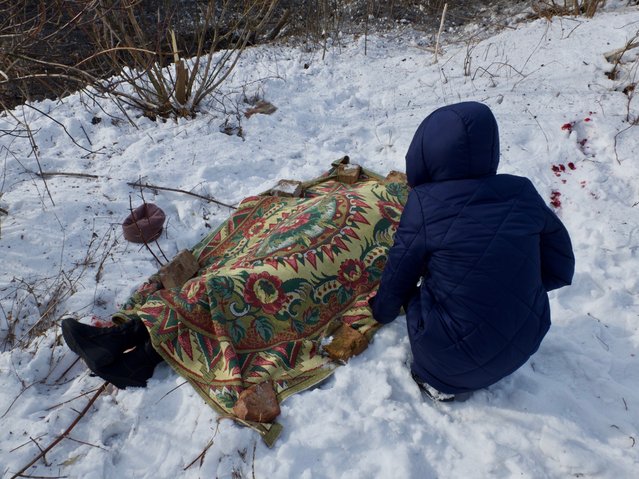 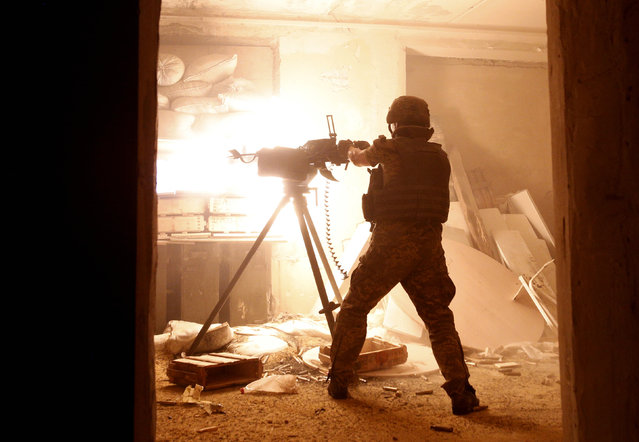 A Ukrainian Forces soldier fires a heavy machine gun during a battle with pro-Russian separatists at Avdeyevka, in Ukraine's Donetsk region on June 25, 2016. (Photo by Anatolii Stepanov/AFP Photo) 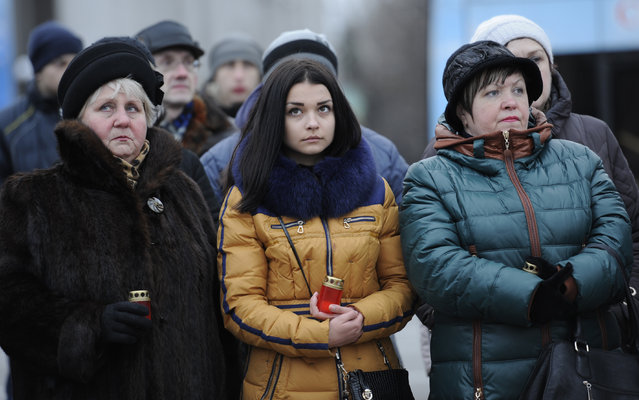 Residents of the self-proclaimd Donetsk People's Republic take part in a vigil for children killed in the conflict opposing seperatist rebels to Ukrainian troops, in Donetsk on March 17, 2015. The vigil takes place after a young girl was accidentally killed by a Ukrainian armoured vehicle in the Ukrainian-held town of Konstantinovka March 16, 2015, sparking riots there. (Photo by Alexander Gayuk/AFP Photo) 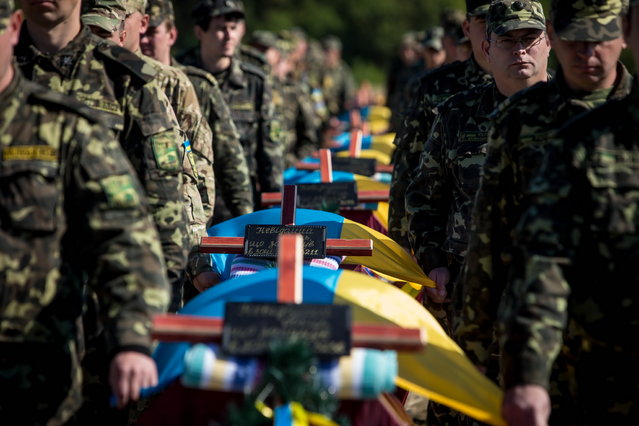 Funeral ceremony for unidentified soldiers at the Kushugum cemetery in Zaporozhye, Ukraine on October 2, 2014. Presumably, these are the bodies of servicemen from the 93rd, 51st, 24th brigades and the Donbass battalion who died at the entrance of the military conflict in the southeast of the country near Ilovaisk. (Photo by Konstantin Sazonchik/TASS) 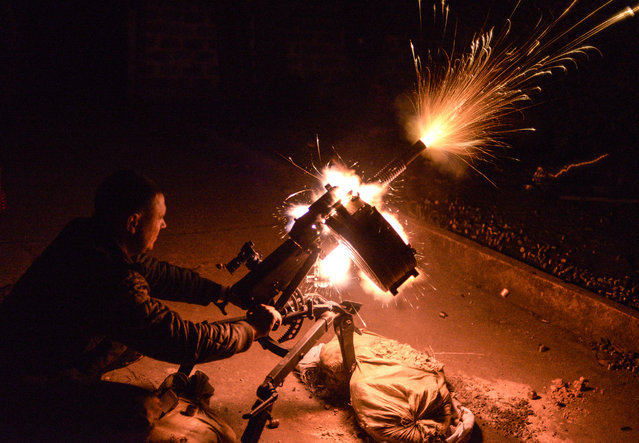 A Ukrainian serviceman shoots from automatic grenade launcher on position near the village of Peski, next to the city of Donetsk on October 20, 2014. Ukraine's armed forces on October 21, 2014, rejected allegations that they indiscriminately used banned “cluster bombs” in the six-month war against pro-Russian insurgents in the separatist east. (Photo by Chernyshev Aleksey/AFP Photo) 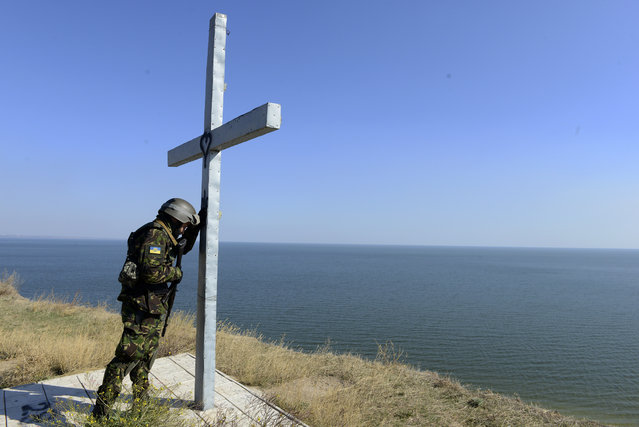 A serviceman of the pro-Ukrainian Saint-Maria battalion prays near the cross, installed on a seashore near the eastern Ukrainian city of Mariupol, on October 2, 2014. (Photo by Alexander Khudoteply/AFP Photo) 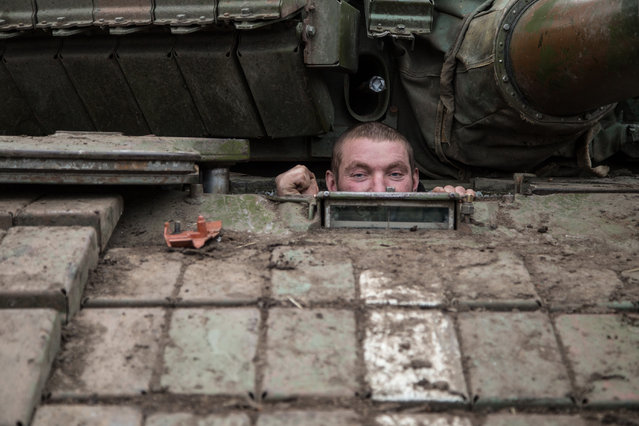 A Ukrainian serviceman looks out from a tank at a base near the village of Peski, Donetsk region, on February 16, 2015. Ukraine's army is not planning to pull its heavy weapons back from the frontline late Monday, as it is meant to do under a nascent truce, because of continued attacks by pro-Russian rebels, a military spokesman told AFP. (Photo by Oleksandr Ratushniak/AFP Photo) 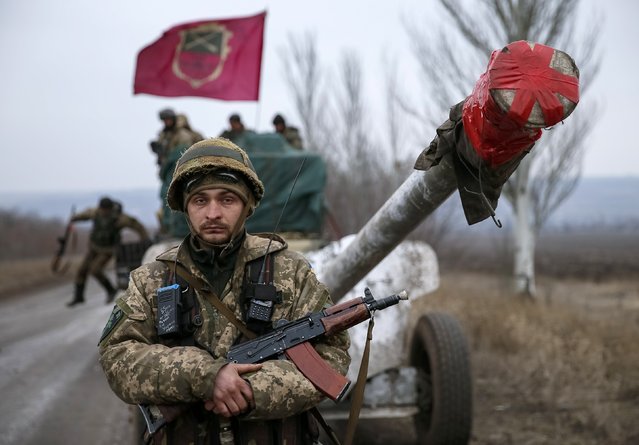 A member of the Ukrainian armed forces stands guard as a convoy of the Ukrainian armed forces including armoured personnel carriers, military vehicles and cannons prepare to move as they pull back from the Debaltseve region, in Paraskoviyvka, eastern Ukraine, February 26, 2015. Ukrainian troops towed artillery away from the front line in the east on Thursday, a move that amounted to recognising that a ceasefire meant to take effect on Feb. 15 was holding at last. (Photo by Gleb Garanich/Reuters) 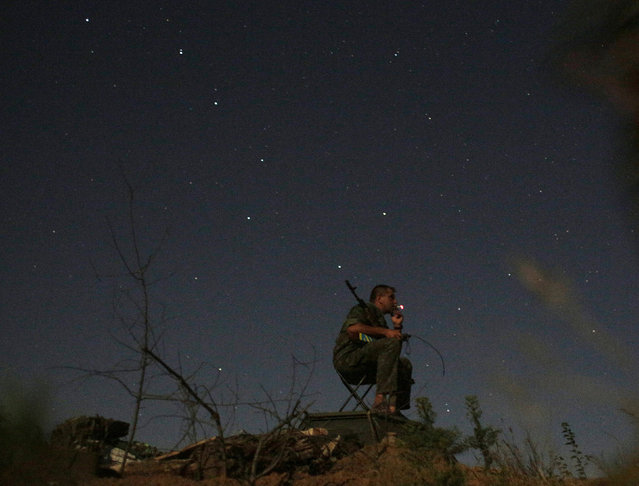 A serviceman smokes on the position of Ukrainian forces in the Lugansk region late on August 26, 2015. Ties between the EU and Russia remain at their lowest ebb over the conflict in Ukraine, ahead of a series of key talks including a visit by President Petro Poroshenko to Brussels on August 27. Renewed fighting in eastern Ukraine between pro-Moscow rebels and Kiev's government forces has made a mockery of a February ceasefire, while the European Union has renewed tough sanctions against Russia. (Photo by Anatolii Stepanov/AFP Photo) 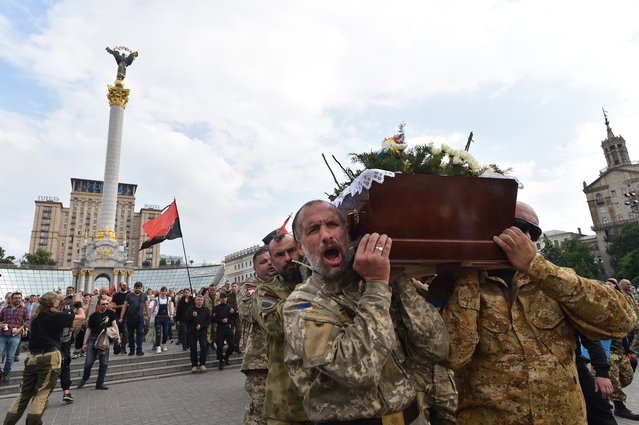 Fighters of Ukrainian volonteers battalion of Right Sector carry coffins with the bodies of their friends Yuriy Gnatyuk and Robert Masley, died as a result of pro-Russian separatists shelling in Donetsk region,during the funeral ceremony on Independence Square in Kiev on June 14, 2016. (Photo by Sergei Supinsky/AFP Photo) 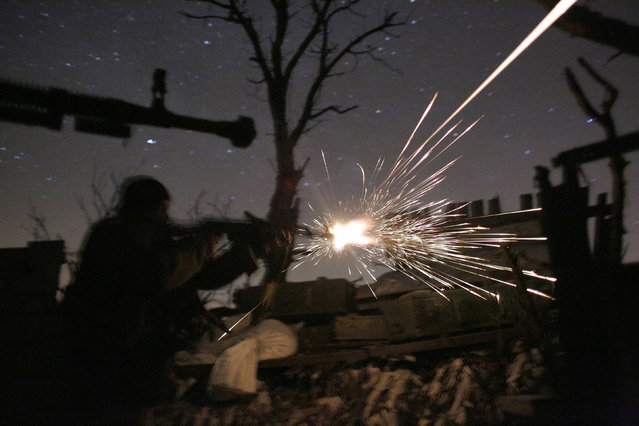 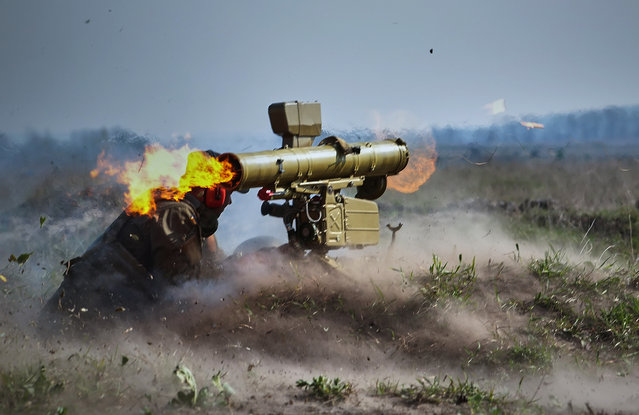 Ukrainian National Guard Academy students in participate in an exercise on a shooting range near of Chuguev city of Kharkiv area, Ukraine, 11 April 2017. (Photo by Sergeiy Kozlov/EPA) 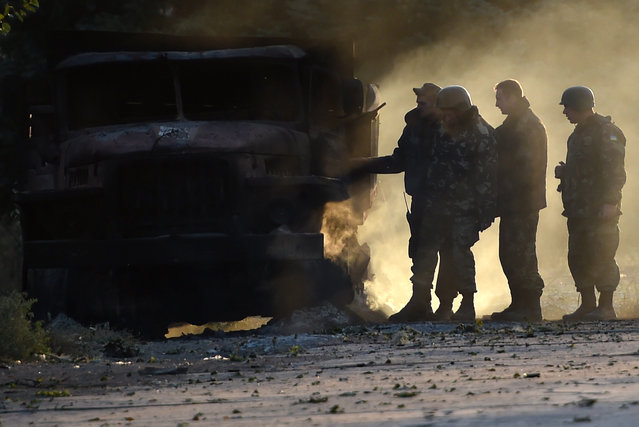 Ukrainian army soldiers check a burnt army truck on September 7, 2014 after an overnight bombing attack, at an Ukrainian army checkpoint in the outskirts of the key southeastern port city of Mariupol. Gunfire and heavy shelling rocked a key frontline city in eastern Ukraine overnight, raising fears on September 7 that a tenuous truce between government and rebel forces had already collapsed. Numerous explosions rattled the night sky and thick smoke was visible on the horizon of Mariupol, a strategic government-held port city on the Azov Sea in the southeast of the country. (Photo by Philippe Desmazes/AFP Photo) 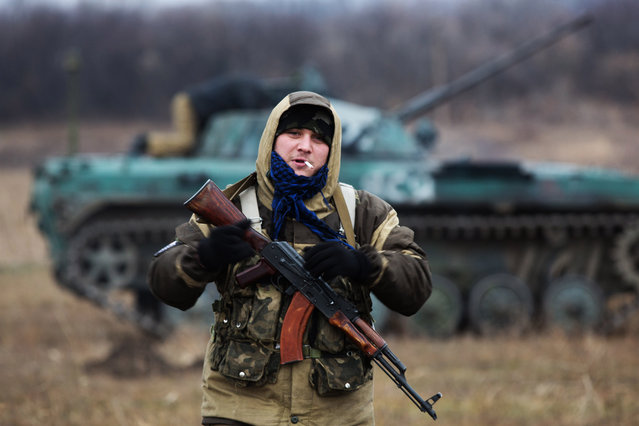 A Pro-Russian militant holds a Kalachnikov asssault rifle and smokes a cigarette in front of a tank taken from Ukrainian forces during fighting in August, as he and other fire their weapons in an open field, in the eastern Ukrainian town of Ilovaisk, some 40 kms east of Donetsk, on November 18 2014. NATO warned on on Novemeber 18 of a “very serious” build-up of Russian soldiers and weapons inside Ukraine and on its border as Germany's foreign minister urged Kiev and Moscow to respect a tattered peace plan. (Photo by Menahem Kahana/AFP Photo) 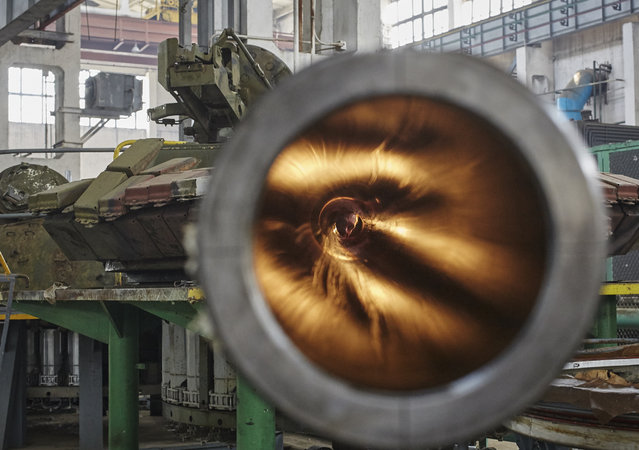 A Ukrainian worker looks through the barrel from inside a tank turret at the Kharkiv's Armored Plant where Ukrainian T-80 tanks are modified, in Kharkiv, Ukraine, 13 July 2015 before they reportedly will be send to the conflict zone at the eastern Ukraine. While the military equipment was prepared, the special representative of the Organization for Security and Cooperation in Europe (OCSE) on 07 July expressed hopes that a new accord on withdrawing weapons from Ukraine's conflict zone can be agreed soon. (Photo by Sergei Kozlov/EPA) 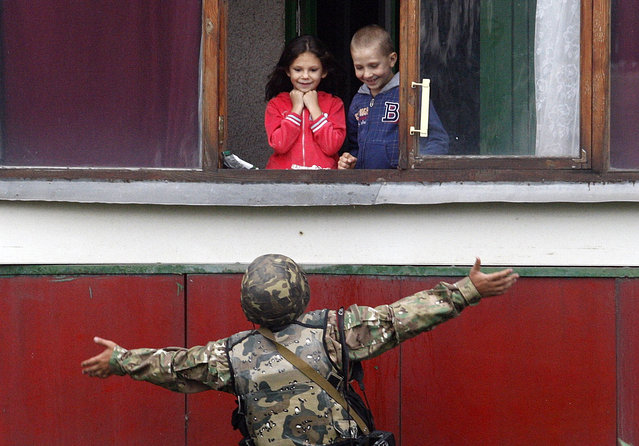 A Ukrainian soldier gestures as he talks with children on August 18, 2014 in the small easter city of Popasna, Lugansk region, recently freed by Ukrainian forces from pro-Russia militants. Kiev accused pro-Russian rebels in eastern Ukraine of killing “many” civilians trying to leave a conflict-torn area by shelling them with equipment provided by Moscow. “Militants shot at a convoy of civilians trying to flee the conflict area not far from Lugansk... using Grad rocket launchers and mortar guns given by Russia”, said security spokesman Andriy Lysenko. “Many people died, including women and children”. (Photo by Anatolii Stepanov/AFP Photo)
Edit Del
09 Dec 2019 00:03:00, post received 0 comments
Publication archive:
←   →
Popular tags:
All tags
Last searches: