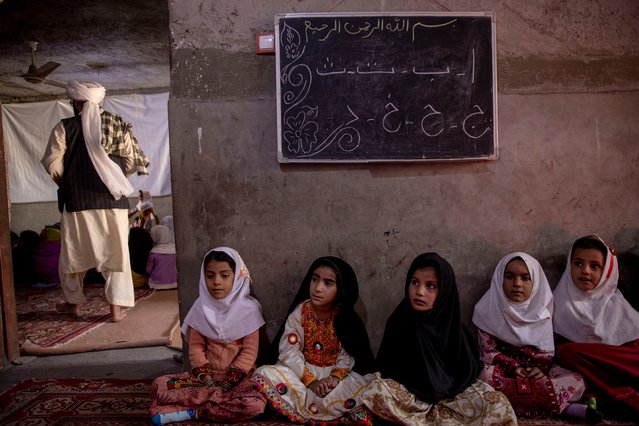 Afghan children attend kindergarten on October 15, 2021 in Nimroz, Afghanistan. Women have not been allowed to work in some cities since the Taliban came to power. The Taliban regained control of Afghanistan and its capital Kabul in mid-August of this year, almost 20 years after they were ousted from power by a US-led coalition in 2001. (Photo by Majid Saeedi/Getty Images) 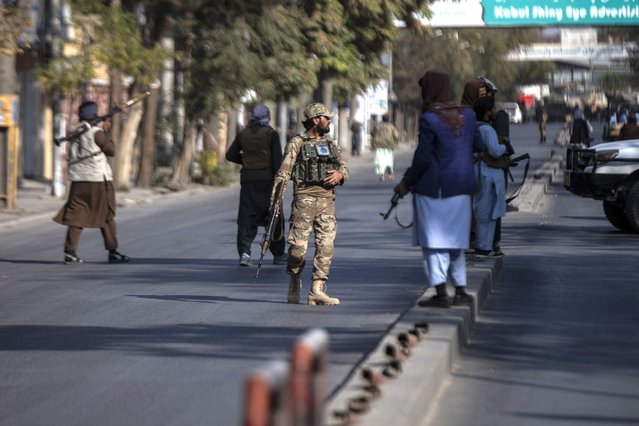 Taliban fighters block roads after an explosion Tuesday, November 2, 2021. An explosion went off Tuesday at the entrance of a military hospital in Kabul, killing severa; people and wounding over a dozen, health officials said. (Photo by Ahmad Halabisaz/AP Photo) 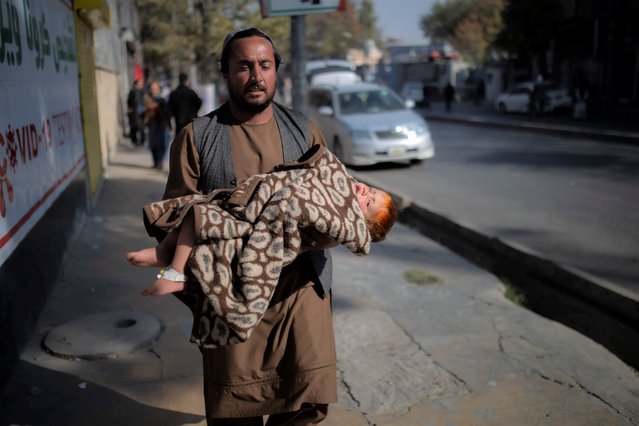 A man hurries away after an explosion Tuesday, November 2, 2021. (Photo by Ahmad Halabisaz/AP Photo) 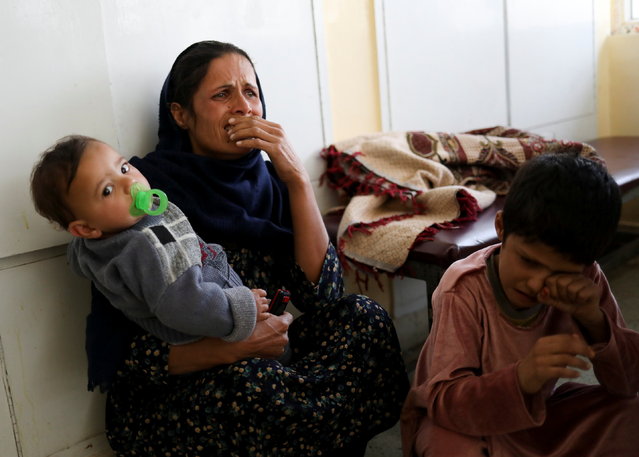 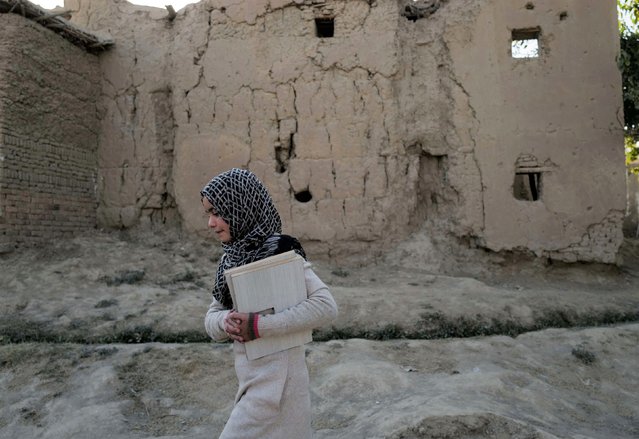 An afghan girl walks after attending a koranic class on the outskirts of Kabul, Afghanistan on November 1, 2021. (Photo by Zohra Bensemra/Reuters) 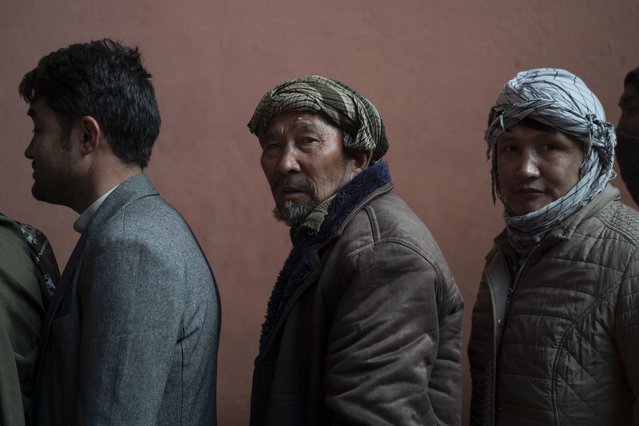 People wait in a line to receive cash at a money distribution organized by the World Food Program (WFP) in Kabul, Afghanistan, Wednesday, November 3, 2021. Afghanistan's economy is fast approaching the brink and is faced with harrowing predictions of growing poverty and hunger. (Photo by Bram Janssen/AP Photo) 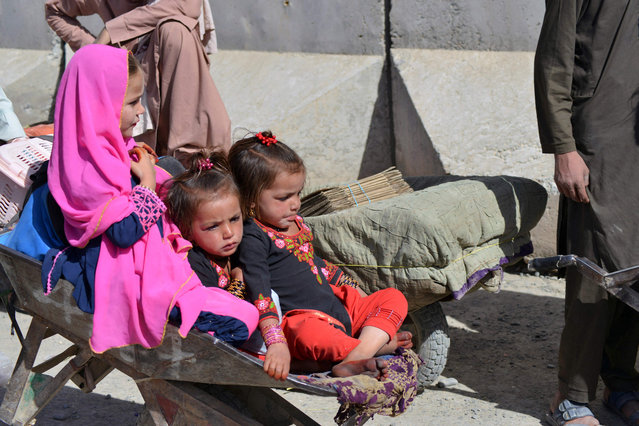 Children sit on a wheelbarrow while waiting with relatives to cross into Pakistan at the Afghanistan-Pakistan border crossing point in Spin Boldak on November 3, 2021, after authorities reopened the border following nearly a month-long closure. (Photo by Javed Tanveer/AFP Photo) 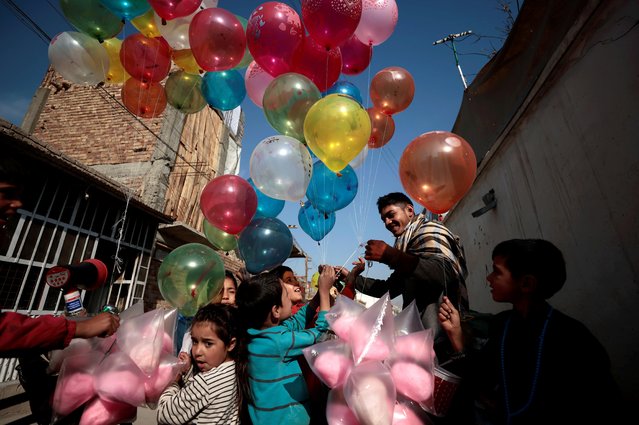 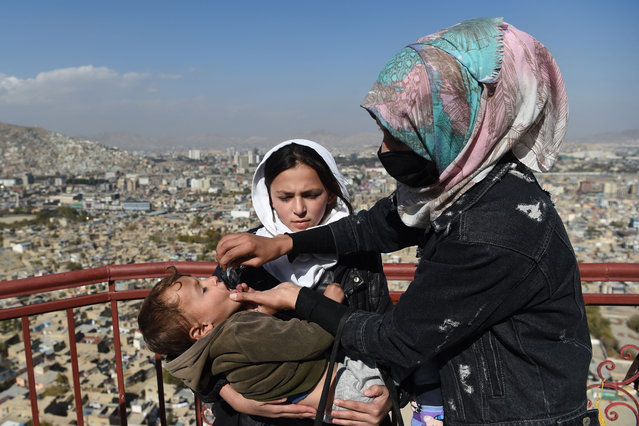 A health worker administers polio vaccine drops to a child during a vaccination campaign in the old quarters of Kabul on November 8, 2021. (Photo by Wakil Kohsar/AFP Photo) 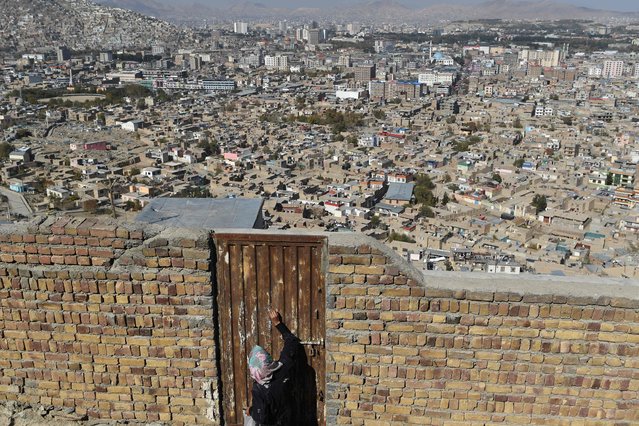 A health worker (C) marks a door of a house after administering polio vaccine drops during a vaccination campaign in the old quarters of Kabul on November 8, 2021. (Photo by Wakil Kohsar/AFP Photo) 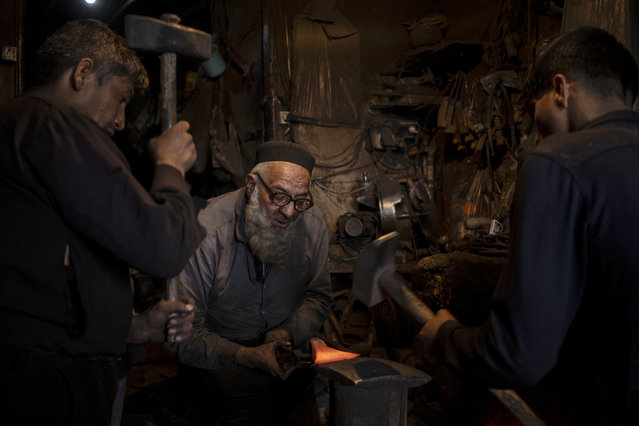 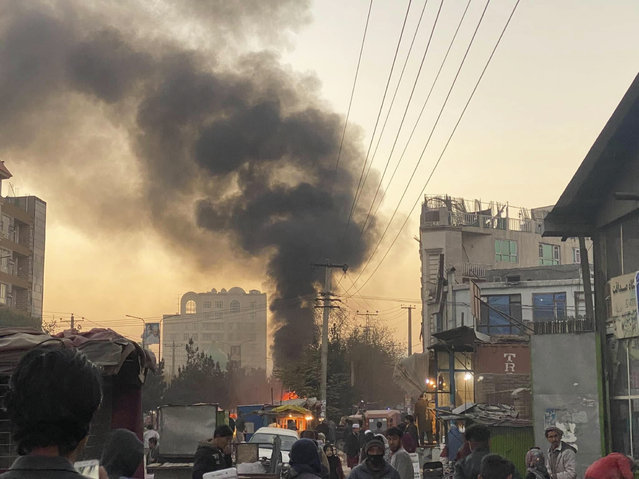 Smoke rise on the sky following a bomb explosion in Kabul, Afghanistan, on Saturday, November 13, 2021. Emergency workers say a bomb has exploded on a mini-bus on a busy commercial street in a Kabul neighborhood mainly populated by members of Afghanistan’s minority Hazara community. (Photo by AP Photo/Stringer) 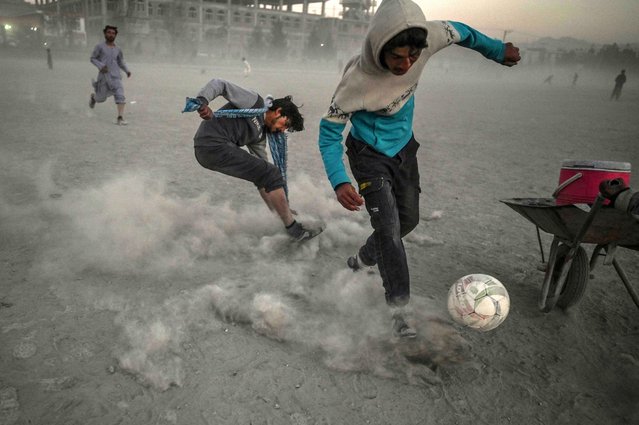 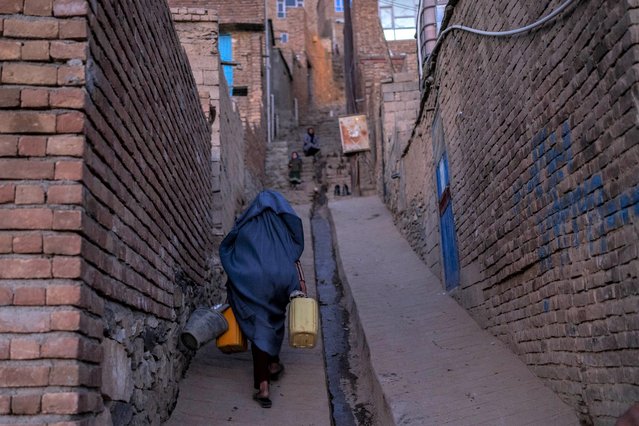 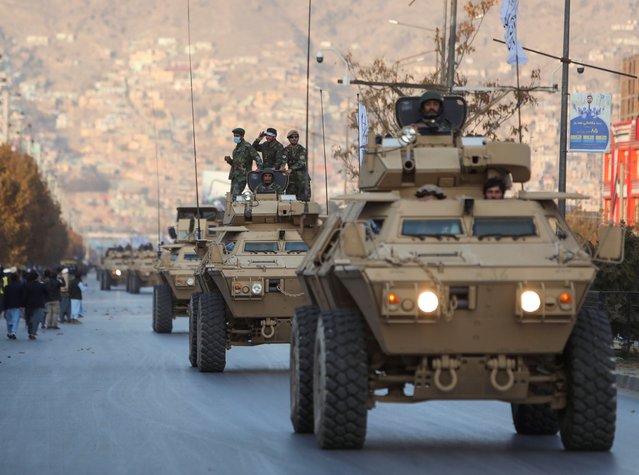 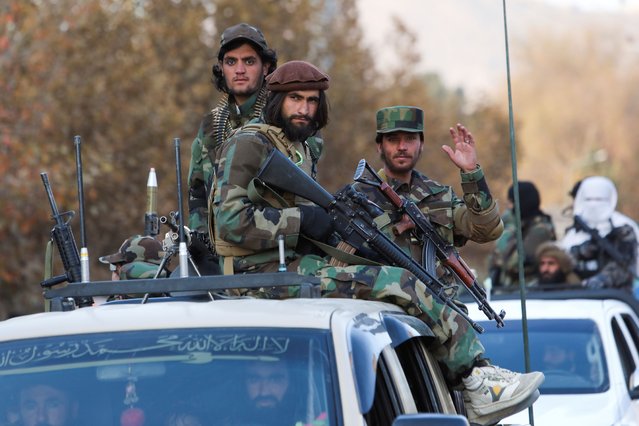 Members of Taliban sit on a military vehicle during Taliban military parade in Kabul, Afghanistan on November 14, 2021. (Photo by Ali Khara/Reuters) 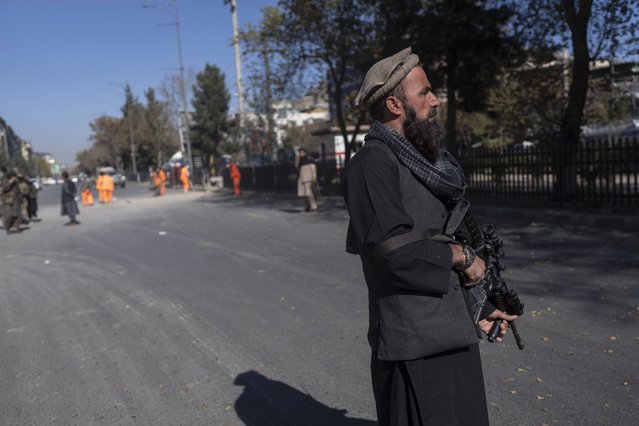 A Taliban fighter secures the area after a roadside bomb went off in Kabul Afghanistan, Monday November 15, 2021. The bomb exploded on a busy avenue in the Afghan capital on Monday, wounding two people, police said. (Photo by Petros Giannakouris/AP Photo) 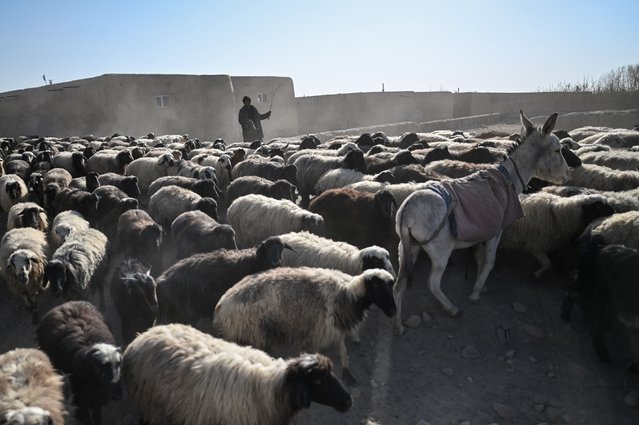 An Afghan shepherd leads his flock of sheep in Qarabagh district distant 56 km to the south-west of Ghazni, in Ghazni province, on November 14, 2021. (Photo by Hector Retamal/AFP Photo) 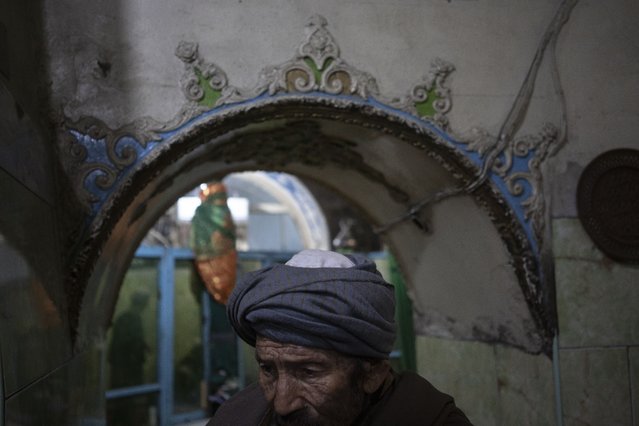 A Hazara man enters a Shiite shrine in Kabul, Afghanistan, Friday, November 5, 2021. A strange, new relationship is developing in Afghanistan following the takeover by the Taliban three months ago. The Taliban, Sunni hard-liners who for decades targeted the Hazaras as heretics, are now their only protection against a more brutal enemy: the Islamic State group. (Photo by Bram Janssen/AP Photo)
Edit Del
25 Nov 2021 07:38:00, post received 0 comments
Publication archive:
←   →
Popular tags:
All tags
Last searches: