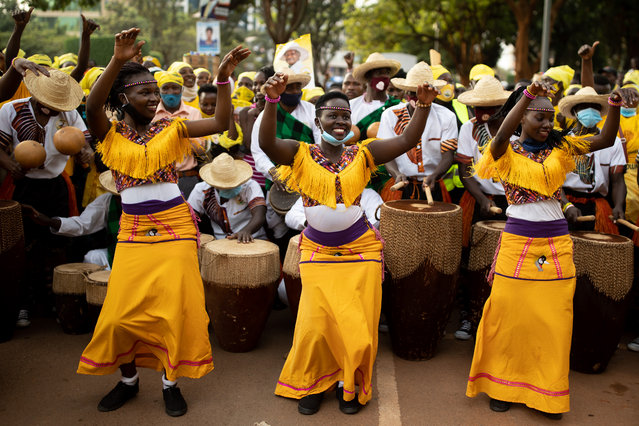 Supporters of President Yoweri Museveni celebrate prior to him speaking to them on January 21, 2021 in Kampala, Uganda. The electoral commission in Uganda declared incumbent Museveni the winner in last week's presidential election. Former Popstar and opposition candidate Bobi Wine of the NUP has accused him of winning by fraud. Wine is currently under house arrest after preparing to lodge a legal challenge to the election result. (Photo by Luke Dray/Getty Images) 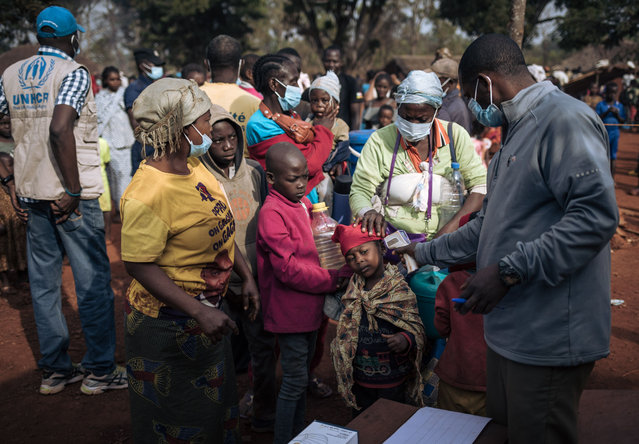 Agents of the United Nations High Commissioner for Refugees (UNHCR) perform a temperature check part of the Covid-19 measures at the entrance of a refugee registration site in Ndu, Bas-Uele Province, Democratic Republic of Congo on January 21, 2021. In mid-January, the United Nations High Commissioner for Refugees (UNHCR) deployed in the northern DRC to assess and respond to the Central African refugee crisis. Since early January, more than 90,000 Central Africans have fled to neighboring Congo from fighting between the coalition of armed groups (CPC). (Photo by Alexis Huguet/AFP Photo) 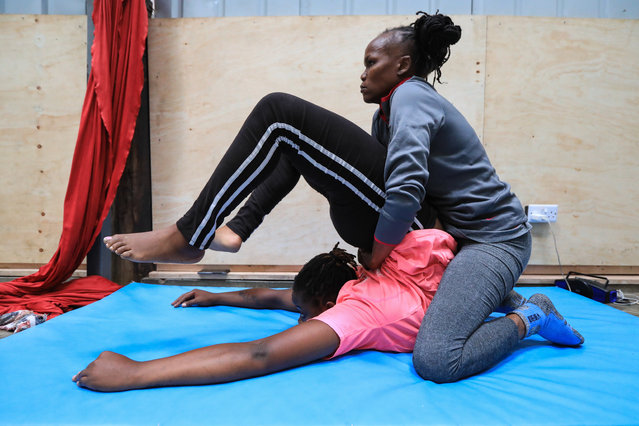 Kenyan acrobatic members of the Mighty Jambo Circus Academy take part in their training routine at the academy in Nairobi, Kenya, 13 January 2021. The Kenyan circus academy resumed back to their daily exercise routine after months of closure since the coronavirus pandemic started. The academy that depends on performances in Europe, especially Spain, has been forced to turn to local performances. With the launch of COVID-19 vaccinations across Europe during the second wave of the pandemic they hope to be able to go back to normal. (Photo by Daniel Irungu/EPA/EFE) 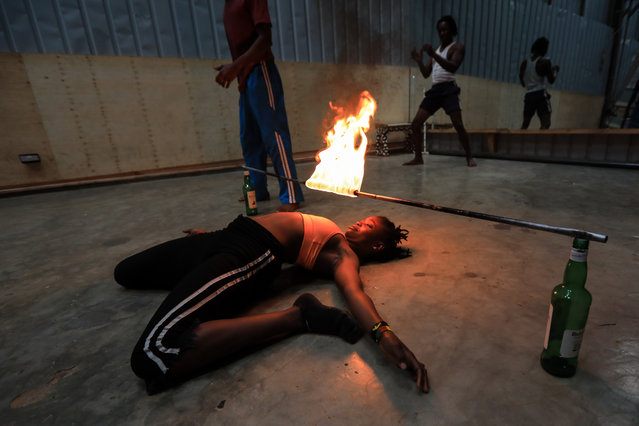 A Kenyan acrobatic member of the Mighty Jambo Circus Academy performs a stunt during their training routine at the academy in Nairobi, Kenya, 13 January 2021. (Photo by Daniel Irungu/EPA/EFE) 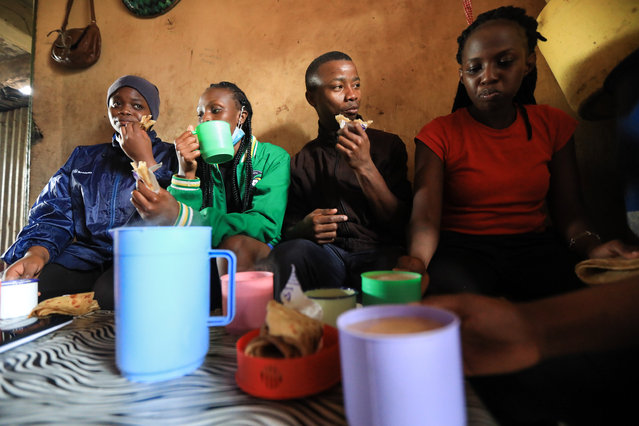 Kenyan acrobatic members of the Mighty Jambo Circus Academy eat breakfast at a local restuarant during their training routine at the academy in Nairobi, Kenya, 13 January 2021. (Photo by Daniel Irungu/EPA/EFE) 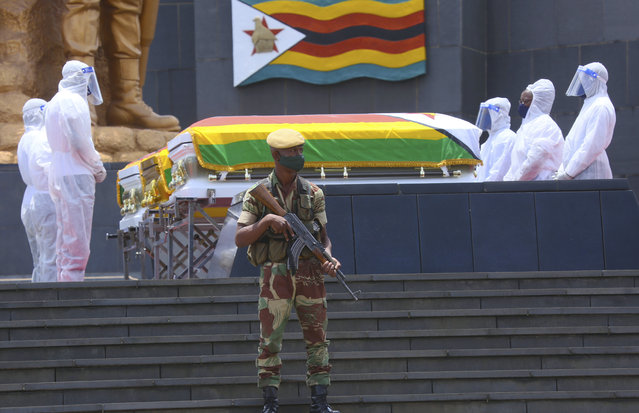 Pallbearers stand next to the coffins of three top government officials prior to their burial, at the National Heroes Acre in Harare, Wednesday, January 27, 2021. Zimbabwe on Wednesday buried three top officials who succumbed to COVID-19, in a single ceremony at a shrine reserved almost exclusively for the ruling elite as a virulent second wave of the coronavirus takes a devastating toll on the country. (Photo by Tsvangirayi Mukwazhi/AP Photo) 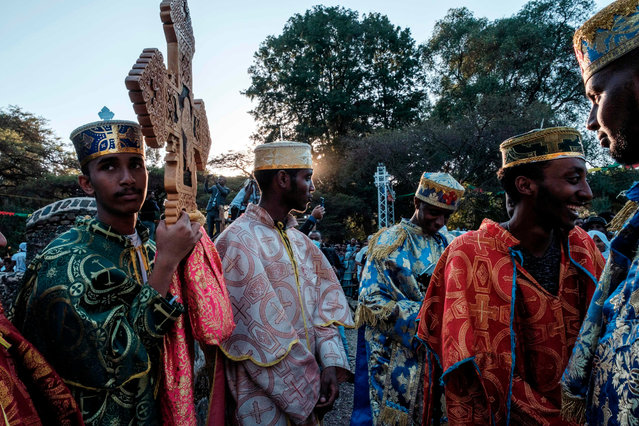 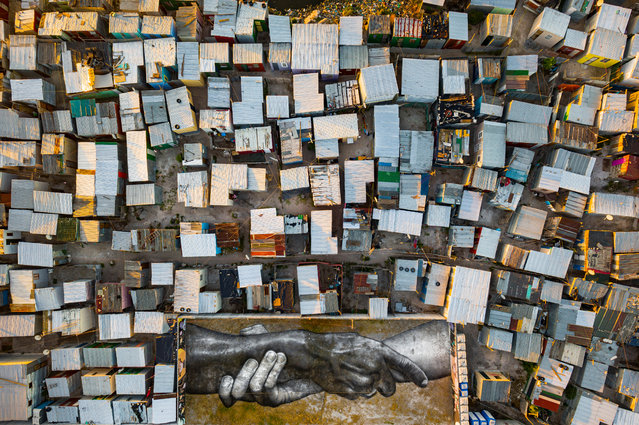 An aerial view shows a giant land-art fresco by French artist Saype, painted for the 9th step of his worldwide “Beyond Walls” project in Philippi township, Cape Town, South Africa on January 21, 2021. (Photo by Valentin Flauraud for Saype via Reuters) 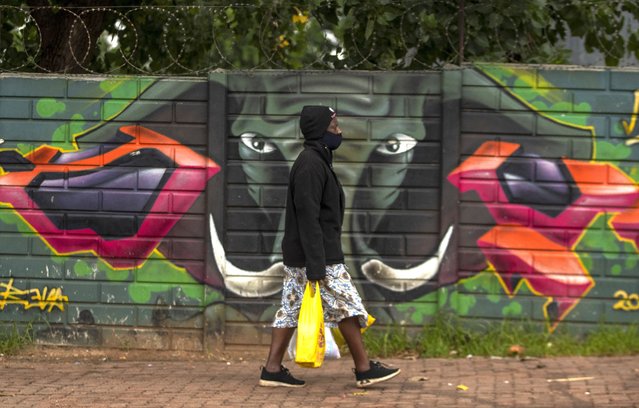 A woman wearing a face mask as a precaution against coronavirus outbreak, walks on the street in downtown Johannesburg, South Africa, Tuesday, January 26, 2021. (Photo by Themba Hadebe/AP Photo) 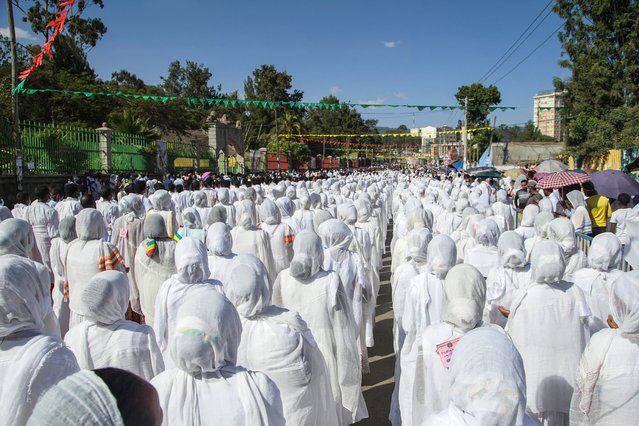 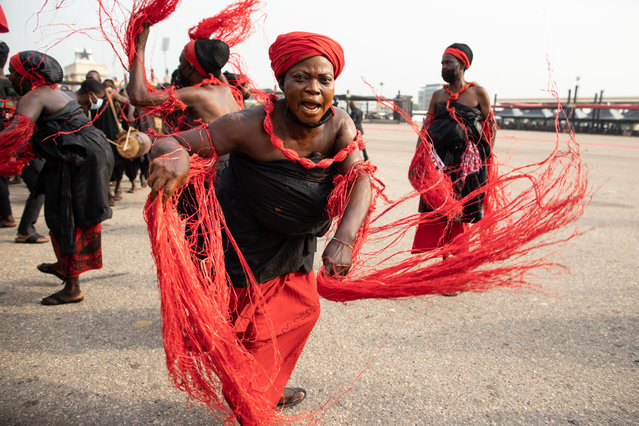 A traditional group performs the final funeral rites of former Ghana President Jerry John Rawlings in Accra, Ghana, on January 27, 2021. Former Ghana President Jerry John Rawlings died in November 2020 at the age of 73 and his funeral was initially scheduled for December 23, 2020 but was postponed, due to what the foreign ministry called “unforeseen circumstances”. (Photo by Nipah Dennis/AFP Photo) 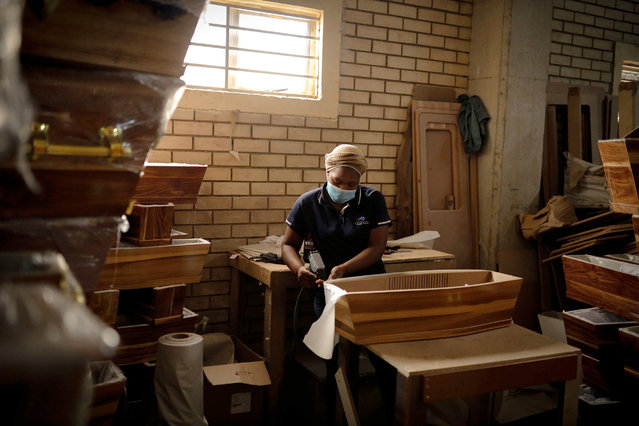 A worker builds a wood coffin at the Enzo Wood Designs manufacturing facility in Johannesburg, South Africa, on January 20, 2021. Casket and coffin manufacturers in South Africa are experiencing an increase in demand due to the high number of registered deaths caused by COVID-19. (Photo by Guillem Sartorio/AFP Photo) 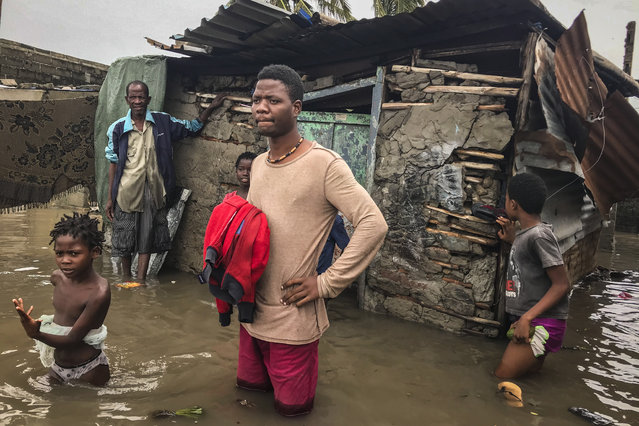 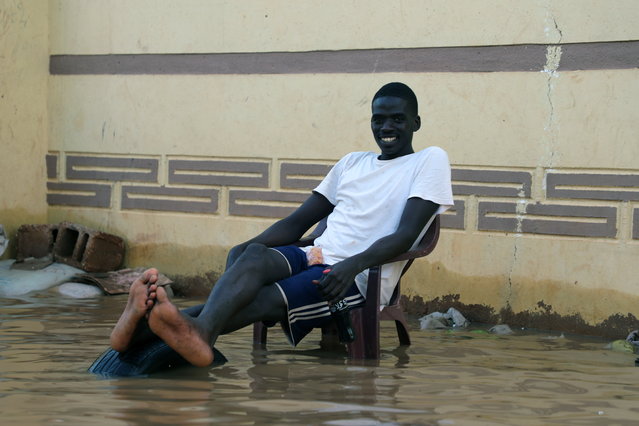 A person sits on a chair next to his flood-affected house from severe flooding in the Umm Dum area, east of Khartoum, Sudan, 08 September 2020. The Nile's flooding usually helps farmers in boosting the fertility of their lands, but this year the flooding is so severe that it has caused a dire situation in Sudan, the flood killed at least 100 people, injured dozens and left thousands homeless. Reports add that the floods threaten Sudan's ancient archeological sites. (Photo by Mohammed Abu Obaid/EPA/EFE) An Ugandan police APC (Armoured Personnel Carrier) is parked on a soccer field in Kampala, Uganda on January 18, 2021. (Photo by Baz Ratner/Reuters) 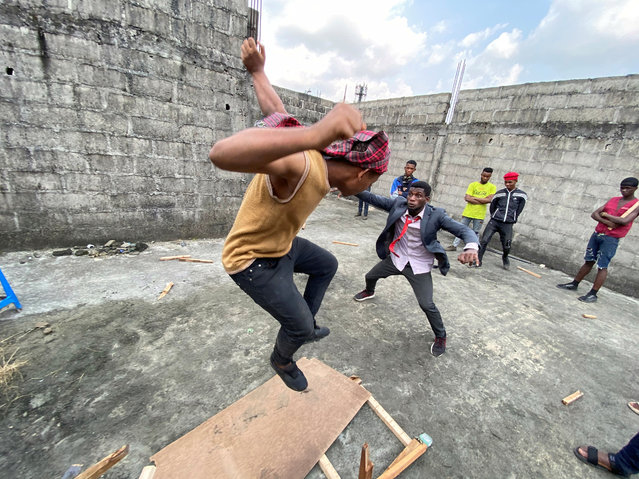 Members of the group “Xcel Theatre”, which hopes to boost interest for action films in Nollywood, imitate scenes from a Chinese action film in Port Harcourt, Nigeria on January 8, 2021. (Photo by Seun Sanni/Reuters) 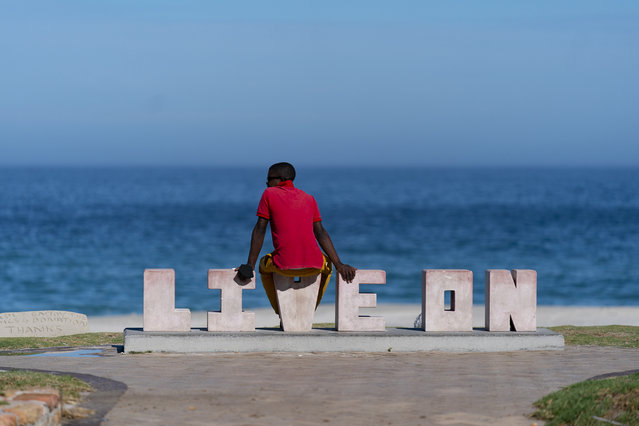 A man sits on a sculpture overlooking the closed international Blue Flagged Camps Bay beach in Cape Town, South Africa, 21 January 2021. The Tourism Business Council of South Africa has said the closure of beaches has had a devastating impact on the tourism industry. South Africa's world renown and pristine beaches, many of them on the international Blue Flag list meeting high environmental and quality standards, are closed in most parts of the country due to governments lockdown laws. South Africa's Covid-19 surge due to the spread of the new more contagious variant of the coronavirus 501.V2 has resulted in more severe lockdown measures including the closure of beaches. South Africa is in the midst of its peak tourism season with the beaches a major international attraction. Travel bans and closed beaches are crippling the already struggling industry according to experts. (Photo by Nic Bothma/EPA/EFE) 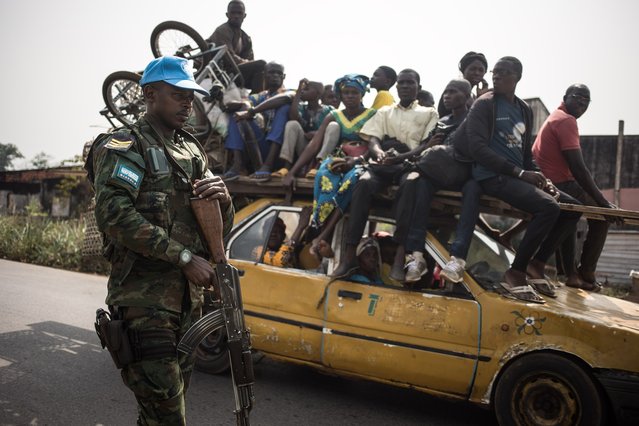 A Rwandan peace-keeper from the United Nations Multidimensional Integrated Stabilization Mission in the Central African Republic (MINUSCA) patrols the road leading to Damara, where skirmishes took place during the week on January 23, 2021. The Coalition for Change (CPC), an amalgamation of several rebel groups, attacked Bangui with the aim of overthrowing outgoing president Faustin-Archange Touadera on January 13. Since then, loyalist forces have been mobilised on the outskirts of the capital, fearing a new offensive. (Photo by Florent Vergnes/Profimedia/AFP Photo)
Edit Del
03 Feb 2021 09:01:00, post received 0 comments
Publication archive:
←   →
Popular tags:
All tags
Last searches: