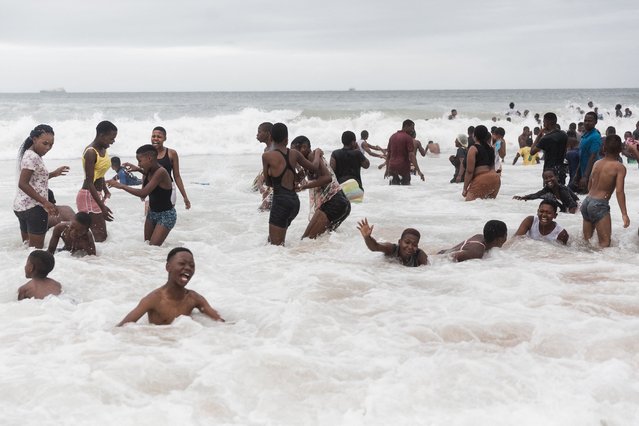 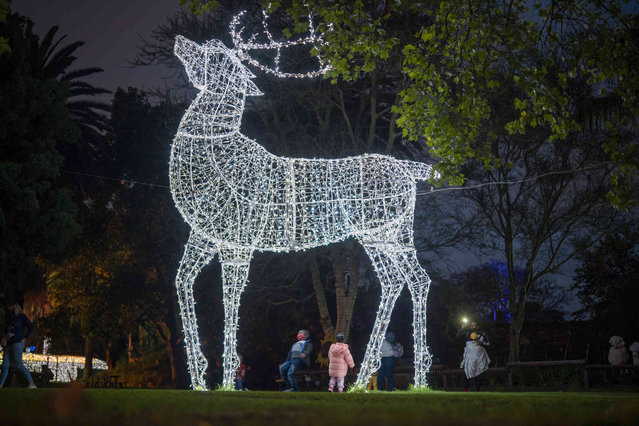 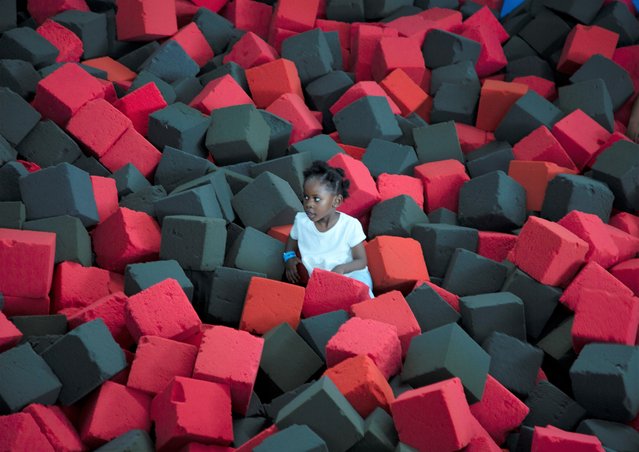 A child is surrounded by sponge cushions as she plays at a Johannesburg shopping mall Friday, December 17, 2021. (Photo by Denis Farrell/AP Photo) 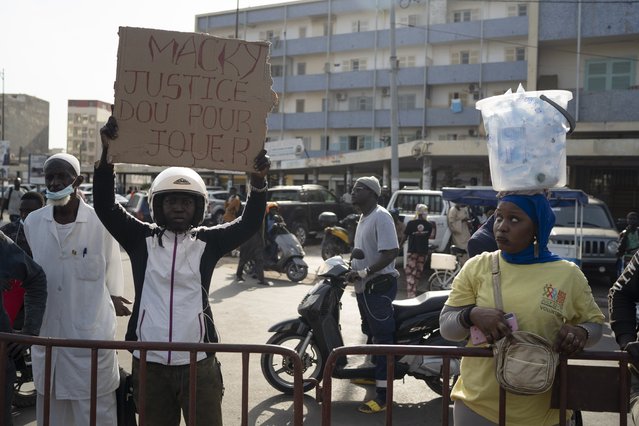 A demonstrator holds up a sign that reads in French “Macky, justice is not a game” referring to the Senegal's president Macky Sall during a protest demanding independence of the justice system in Dakar, Senegal, Friday, December 17, 2021. (Photo by Leo Correa/AP Photo) 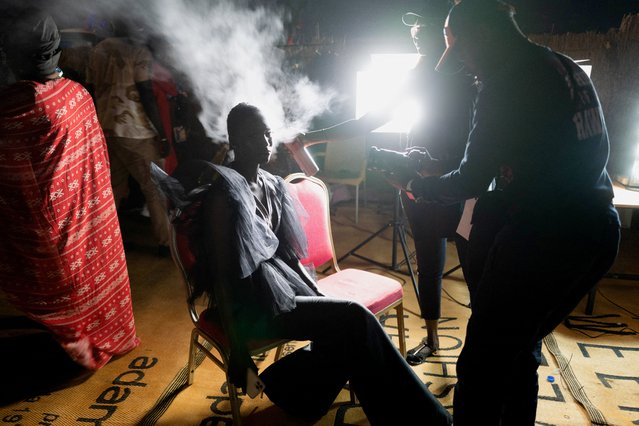 A model prepares backstage before a show of the 19th annual Dakar Fashion Week, at the Baobad forest, in Mbour, Senegal, December 18, 2021. (Photo by Zohra Bensemra/Reuters) 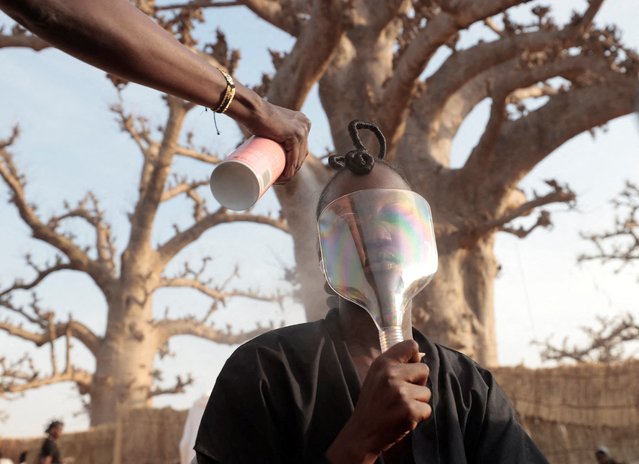 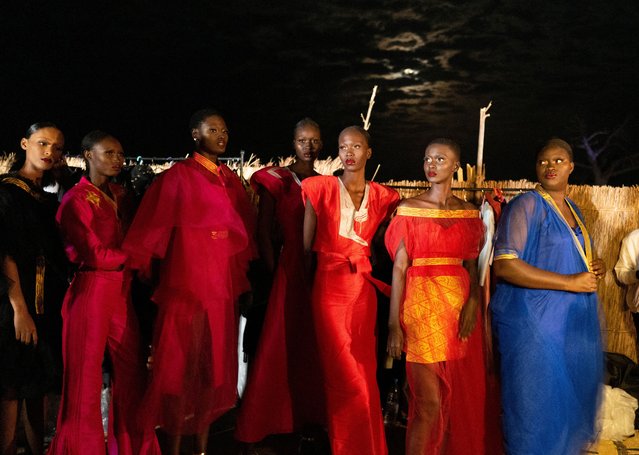 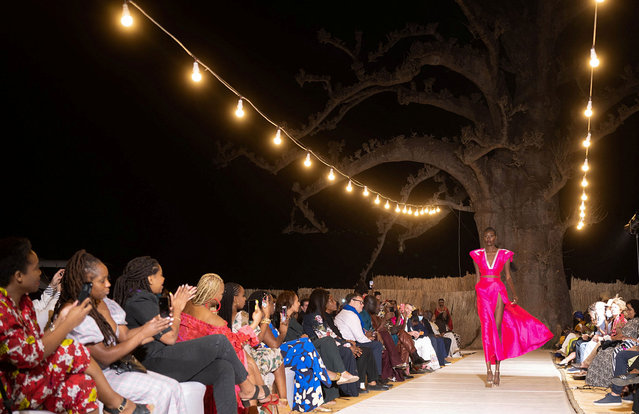 A model presents a creation by Adama Paris during the 19th annual Dakar Fashion Week at the Baobad forest, Mbour, Senegal, December 18 2021. (Photo by Zohra Bensemra/Reuters) 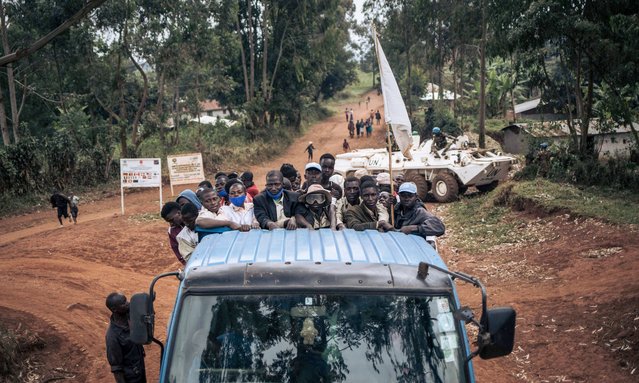 Red Cross volunteers leave Rhoo IDP camp to bury bodies in the village of Dhedja, escorted by soldiers from MONUSCO (the United Nations mission in DR Congo) on December 19, 2021, 60 kilometers from Bunia, the provincial capital of Ituri in northeastern Democratic Republic of Congo. Since late November, at least 100 people have been killed by militiamen in this area. Because of the insecurity and the presence of the militiamen, no one has been able to go and bury the bodies in Dhedja. For the past two years, thousands of armed men in the Ituri hills have been attacking villages, IDP camps and military positions in the name of the Cooperative for the Development of Congo, Codeco. (Photo by Alexis Huguet/AFP Photo) 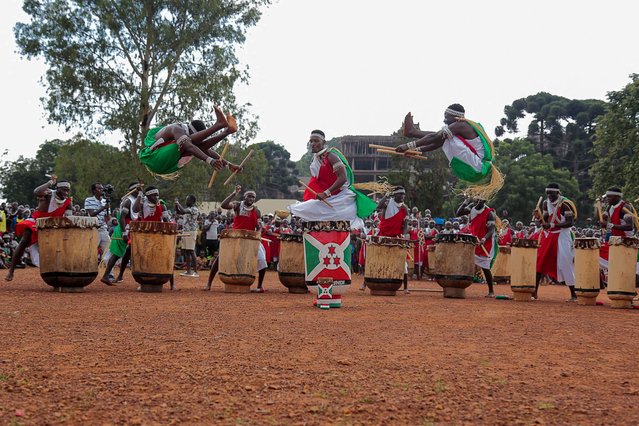 Traditional Burundian drummers perform the royal drum dance during the national drummer contest in Gitega, Burundi, on December 20, 2021. The drums of Burundi was inscribed in 2014 on the intangible cultural heritage list of the United Nations' cultural agency UNESCO. (Photo by Tchandrou Nitanga/AFP Photo) 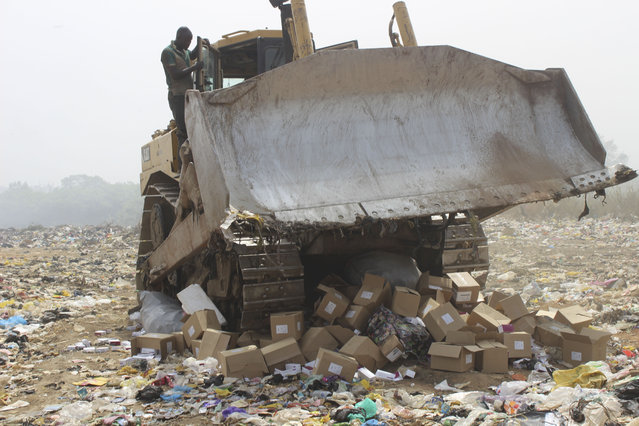 Expired COVID-19 vaccines are being destroyed by government officials in Abuja, Nigeria. Wednesday, December 22, 2021. Nigeria destroyed more than 1 million expired doses of AstraZeneca's COVID-19 vaccine on Wednesday after authorities said they could not be used before their expiration date. (Photo by Olamikan Gbemiga/AP Photo) 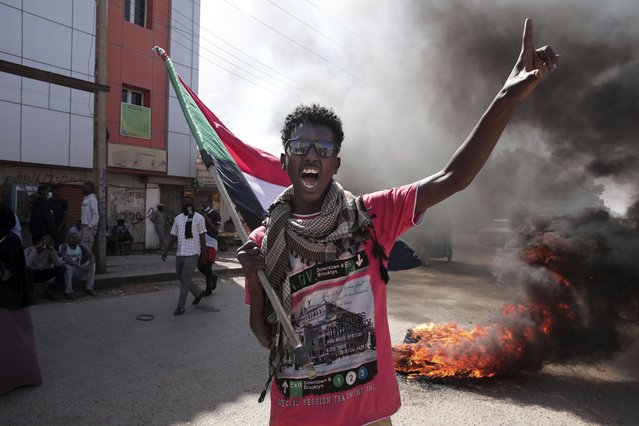 A man chants slogans during a protest to denounce the October military coup, in Khartoum, Sudan, Saturday, December 25, 2021. Sudanese security forces fired tear gas to disperse protesters as thousands rallied since earlier in the day, even as authorities tightened security across Khartoum, deploying troops and closing all bridges over the Nile River linking the capital with its twin city of Omdurman and the district of Bahri, the state-run SUNA news agency reported. (Photo by Marwan Ali/AP Photo) 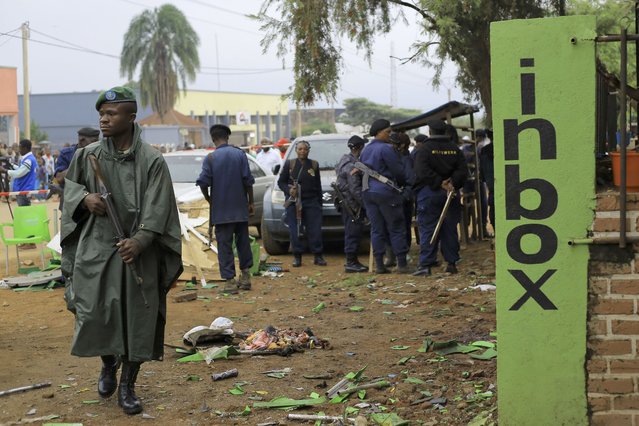 Police officers inspect the scene of a bombed explosion in Beni, eastern Congo Sunday December 26, 2021. A bomb exploded at a restaurant Saturday as patrons gathered on Christmas Day in an eastern Congolese town where Islamic extremists are known to be active. (Photo by Al-hadji Kudra Maliro/AP Photo) 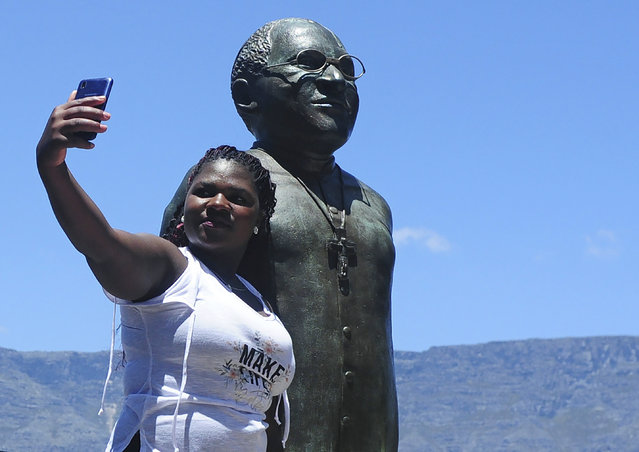 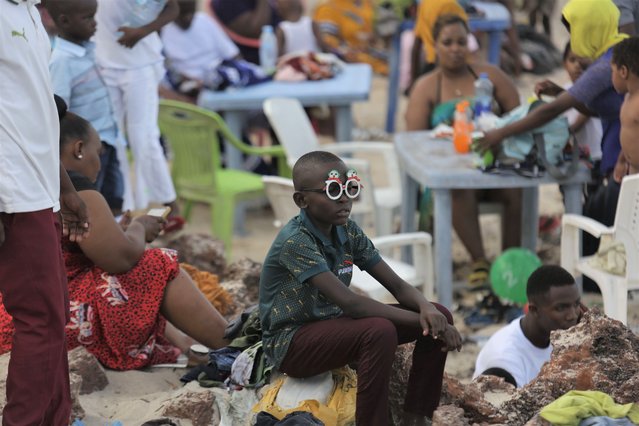 People enjoy their time on a beach during the Christmas holiday in Dar es Salaam, Tanzania, on December 25, 2021. (Photo by Xinhua News Agency/Rex Features/Shutterstock) 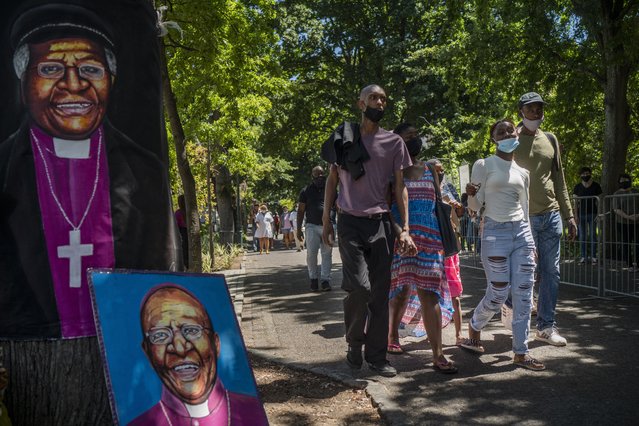 People line up to pay their respect for Anglican Archbishop Emeritus Desmond Tutu at the St. George's Cathedral Friday, December 31, 2021, where he will lie in state for a second day in Cape Town, South Africa. Tutu, the Nobel Peace Prize-winning activist for racial equality and LGBT rights died Sunday at the age of 90. (Photo by Jerome Delay/AP Photo) 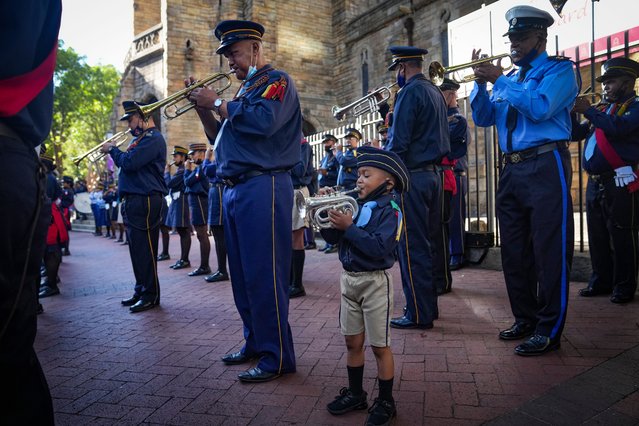 A young trumpeter joins the Anglican Church band as the coffin of late Archbishop Emeritus Desmond Tutu arrives outside the St. George's Cathedral in Cape Town, South Africa, 31 December 2021. The anti-apartheid leader and Nobel Peace Prize laureate, who was a key figure in the dismantling of apartheid, died on 26 December 2021 at the age of 90. A full state funeral will be held on 01 January 2022. (Photo by Nic Bothma/EPA/EFE) 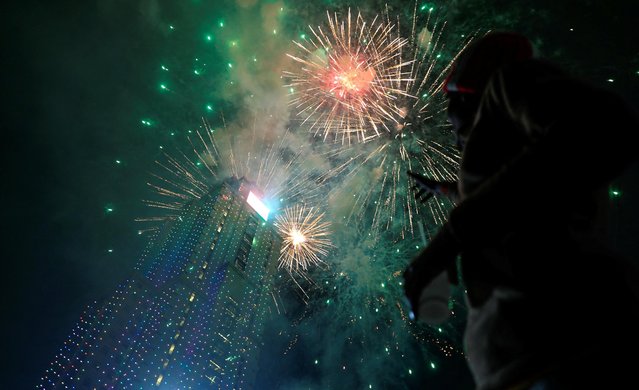 A reveller looks at fireworks explode over the UAP Old Mutual Tower during the New Year's Eve celebrations in Nairobi, Kenya on January 1, 2022. (Photo by Thomas Mukoya/Reuters) 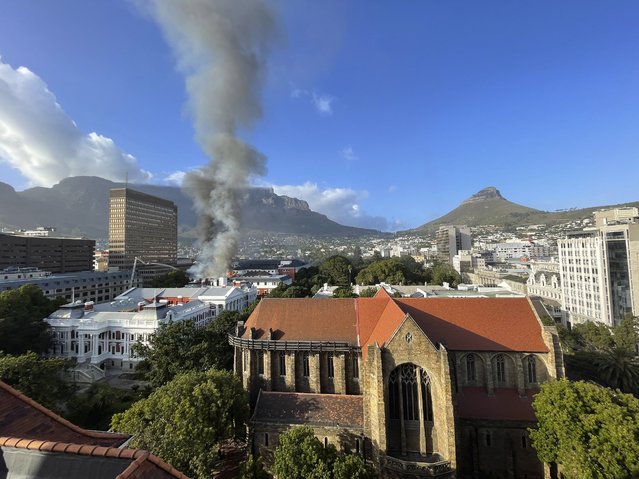 A plume of smoke arises above the Houses of Parliament, behind the St. George's Cathedral, in Cape Town, South Africa, Sunday, January 2, 2022. Firefighters have been deployed and the cause is unknown. (Photo by Jerome Delay/AP Photo) 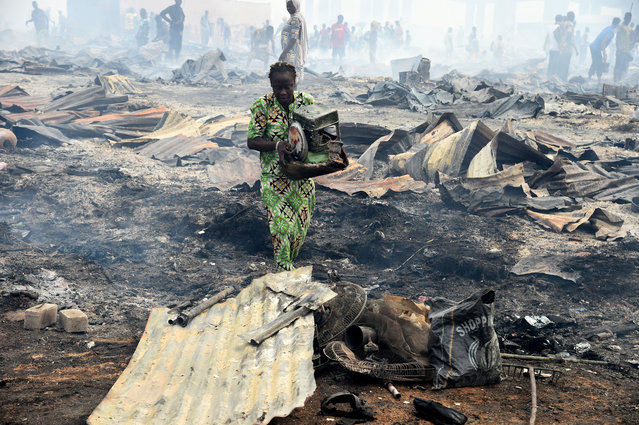