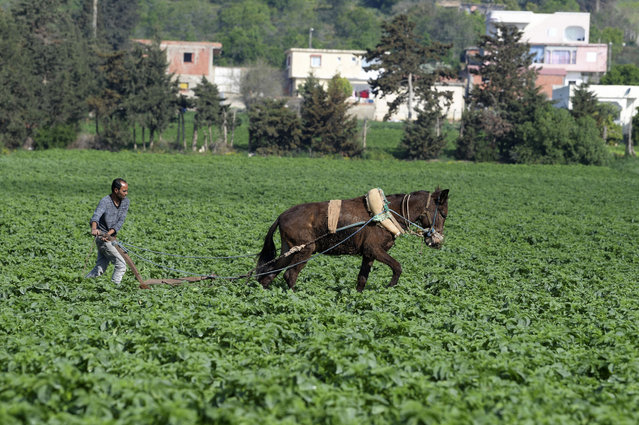 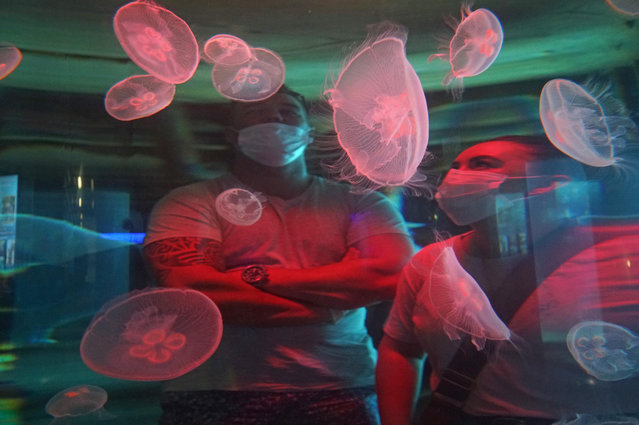 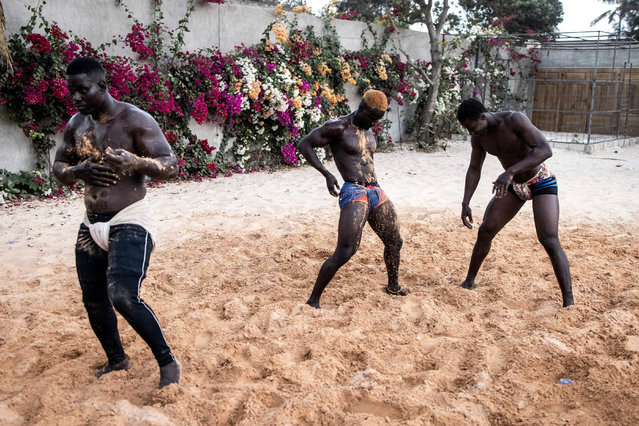 Senegalese wrestlers cover themselves in sand as they prepare to start their training program in Petit Mbao on March 29, 2021. As Covid-19 restrictions have been lifted, wrestlers now start prepare themselves for the start of wrestling tournaments. Senegalese wrestling, which has its roots in the ceremonies celebrating the end of harvests in Serer and Diola ethnic groups and remains surrounded by a thick cloud of mystical practice, is still extremely popular in this West African country. (Photo by John Wessels/AFP Photo) 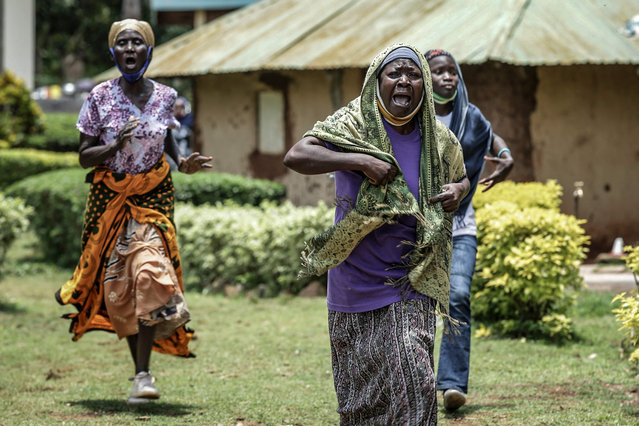 Mourners react to the death of Mama Sarah Obama, the Kenyan grandmother of former US President Barack Obama, at the mortuary of Jaramogi Oginga Odinga Teaching and Referral Hospital in Kisumu, Kenya, on March 29, 2021. Sarah Obama, popularly known as Mama Sarah, had been admitted to the Jaramogi Oginga Odinga Teaching and Referral Hospital in Kisumu. Once a simple country woman, Sarah Obama was for a long time best known for the hot porridge and doughnuts she served at a local school. But she rose to world fame with the 2008 election of her step-grandson Barack as the first black US president. (Photo by Brian Ongoro/AFP Photo) 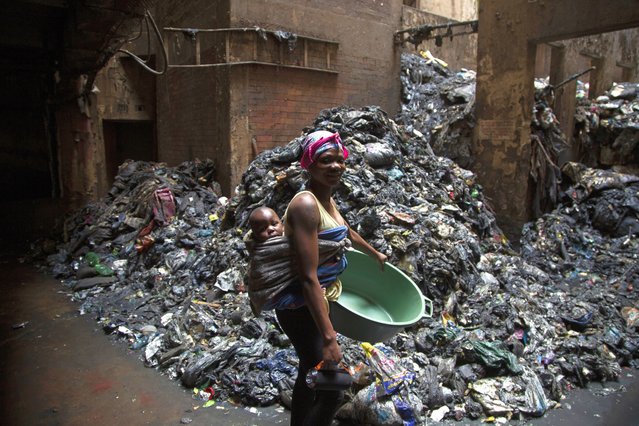 A woman with her child on her back goes about her daily chores as she passes piles of rubbish in a derelict building where she lives in Hillbrow, Johannesburg, South Africa, Monday, March 29, 2021. The building, which houses an orphanage, is being renovated to create accommodation in the inner city. (Photo by Denis Farrell/AP Photo) 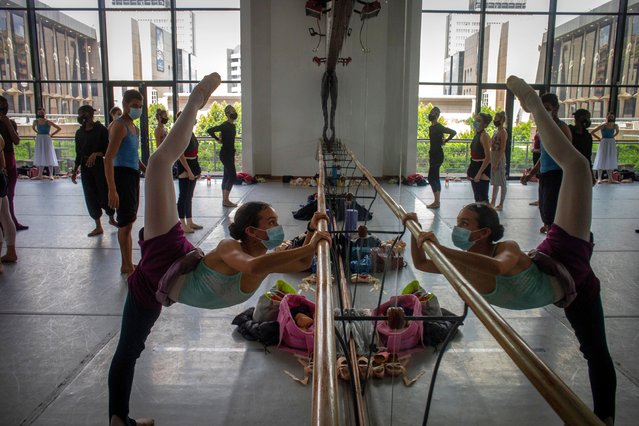 Ballert dancers prepare to perform during a rehearsal for “Ballet and Beyond” by Joburg Ballet at the Joburg Theater, in Johannesburg, South Africa, 01 April 2021. One year and one month after Joburg Ballet's season was cut short by the start of the national Covid-19 coronavirus lockdown, the company returns to the stage of the Joburg Theatre from 09 to 11 April with “Ballet and Beyond”, a showcase of three world premieres and one SA premiere. (Photo by Kim Ludbrook/EPA/EFE) 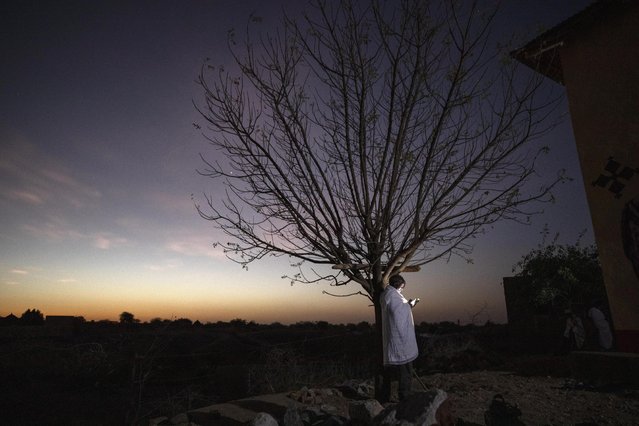 A Tigrayan refugee man looks at his mobile phone in front of a church near Hamdeyat Transition Center near the Sudan-Ethiopia border, eastern Sudan, March 21, 2021. (Photo by Nariman El-Mofty/AP Photo) 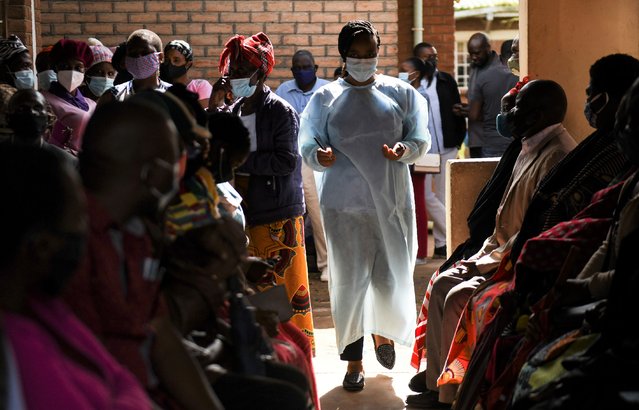 Numbers are handed out to people who wait to receive the AstraZeneca COVID-19 vaccine at Ndirande Health Centre in Blantyre Malawi, Monday, March 29, 2021. Malawi is vaccinating health care workers, elderly and those with health conditions that put them at higher risk of severe COVID-19, using the AstraZeneca doses that arrived early in March. (Photo by Thoko Chikondi/AP Photo) 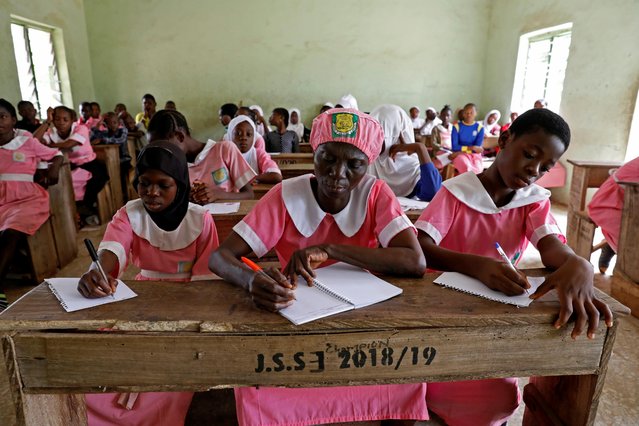 Shade Ajayi, 50, takes notes during class at Ilorin Grammar School in Ilorin, Kwara state, March 25, 2021. Ajayi had never set foot in a classroom until middle age. Now 50, she is happily learning to read and write alongside students nearly four decades younger than her. (Photo by Temilade Adelaja/Reuters) 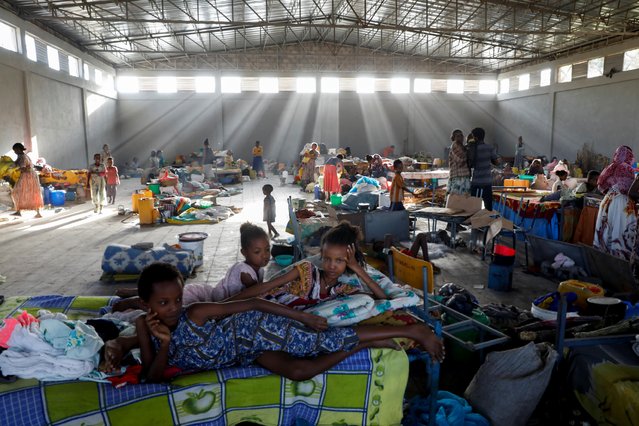 Displaced people are seen at the Shire campus of Aksum University, which was turned into a temporary shelter for people displaced by conflict, in the town of Shire, Tigray region, Ethiopia, March 14, 2021. Families described fleeing from ethnic Amhara militia in the Tigray region, four months after the Ethiopian government declared victory over the rebellious Tigray People's Liberation Front (TPLF). (Photo by Baz Ratner/Reuters) 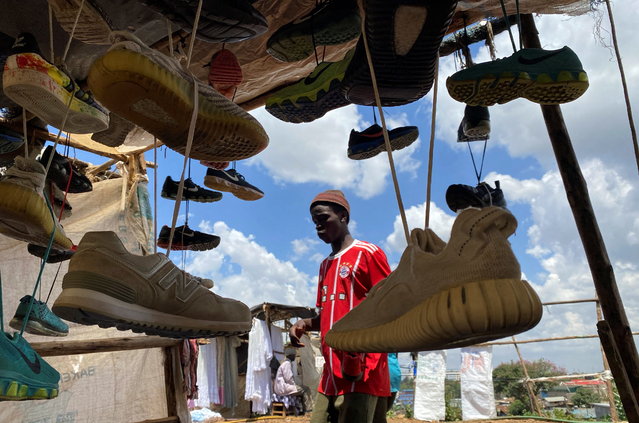 A vendor arranges second-hand shoes for sale at an open stall during Good Friday, after the government banned gatherings amid concerns about the spread of coronavirus disease (COVID-19) at the Kibera slums in Nairobi, Kenya on April 2, 2021. (Photo by Thomas Mukoya/Reuters) 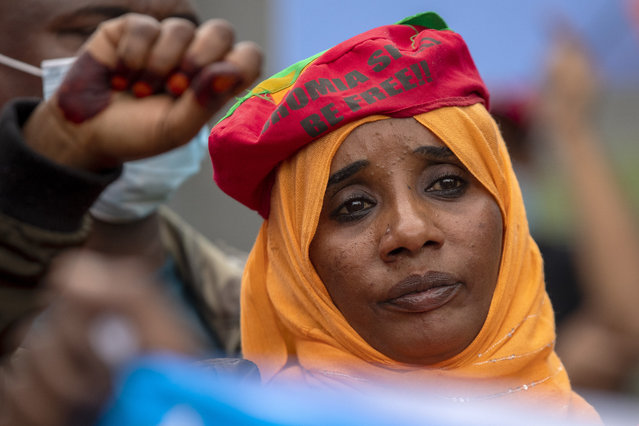 A member of Oromia community raises her fist during a protest against the conflict in the Ethiopia's Tigray region, outside the European Union offices in Pretoria, South Africa, Thursday, March 25, 2021. (Photo by Themba Hadebe/AP Photo) 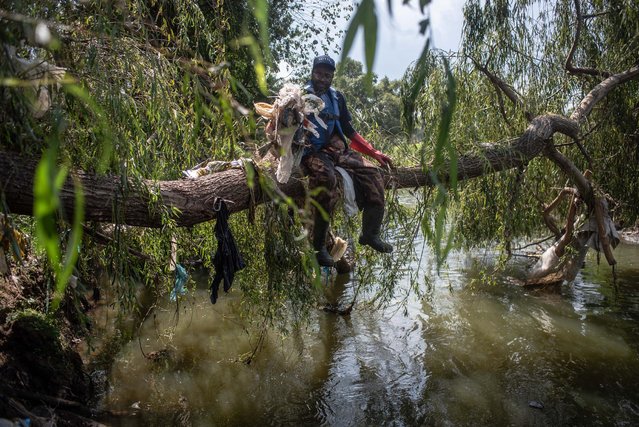 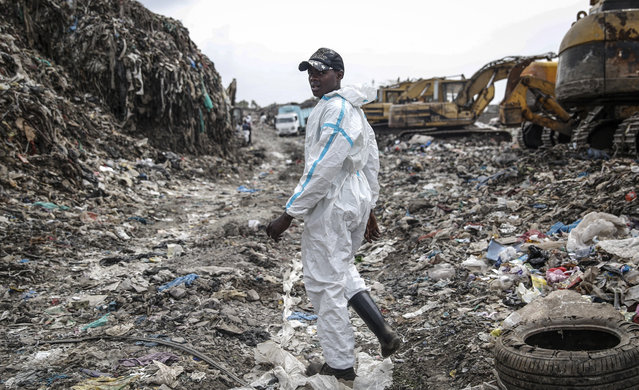 Isaac Kivai scavenges recyclable materials for a living at Dandora, the largest garbage dump in the Kenyan capital of Nairobi, Sunday, March 28, 2021. He wears a protective medical suit he and his friends had found in the trash. The waste pickers say the gear protects them from the weather during the rainy season. (Photo by Brian Inganga/AP Photo) 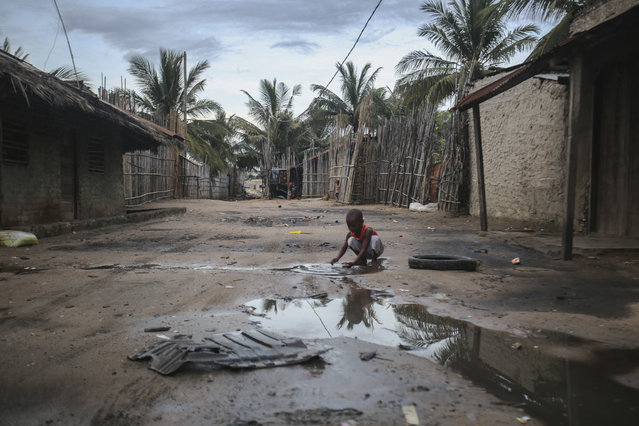 A child plays in one of the alleys of the port of Paquitequete near Pemba on March 29, 2021. Sailing boats are expected to arrive with people displaced from the coasts of Palma and Afungi after suffering attacks by armed groups since last March 24. Dozens of people were killed in coordinated jihadist attacks in northern Mozambique's Palma town, the government said on Sunday, four days after the raid was launched and forced the evacuation of thousands of survivors to safety in the provincial capital Pemba. (Photo by Alfredo Zuniga/AFP Photo) 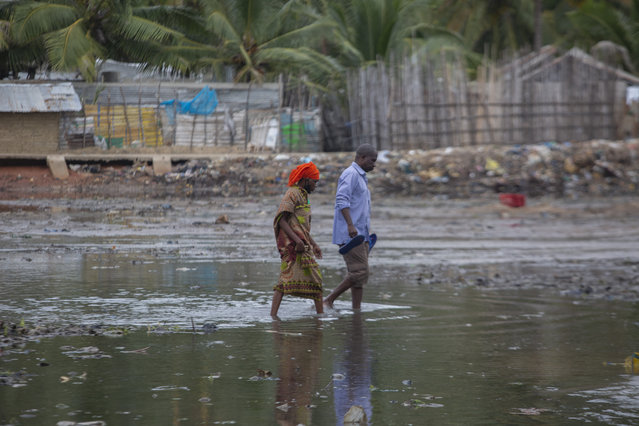 Residents walk through a pool of water at the coast of Paquitequete where sailing boats are expected to arrive with people displaced from the coasts of Palma and Afungi after suffering attacks by armed groups on March 30, 2021. (Photo by Alfredo Zuniga/AFP Photo) 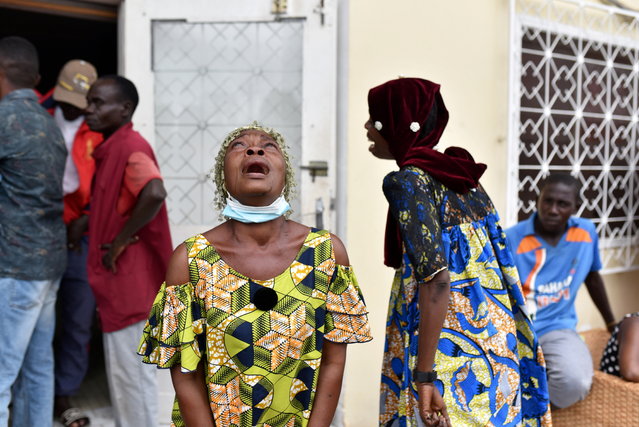 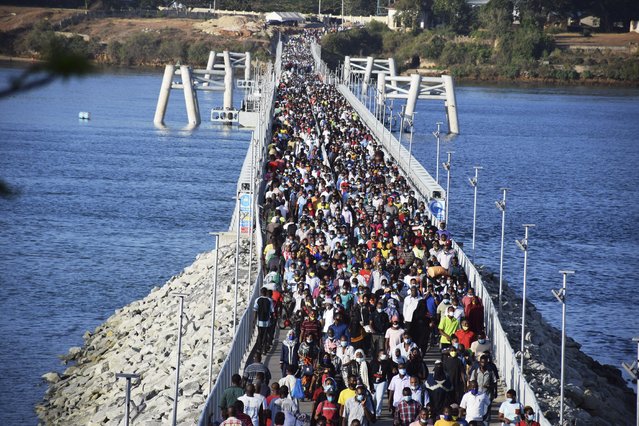 Some hundreds of Mombasa residents cross the recently constructed floating foot bridge from Mombasa's Likoni mainland to the Mombasa Island on Wednesday March 31, 2021. More than three hundred thousand people who normally cross the waterway via Likoni Ferry channel everyday, are now forced to use the floating foot bridge after the Mombasa County Covid-19 committee ordered all people to cross via the bridge. It is not exactly known how many people the floating bridge can sustain and some fear a disaster due to the high number of people crossing through the bridge. (Photo by Gideon Maundu/AP Photo) 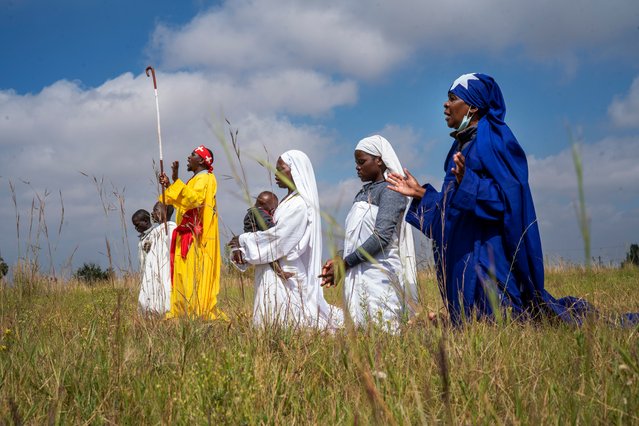