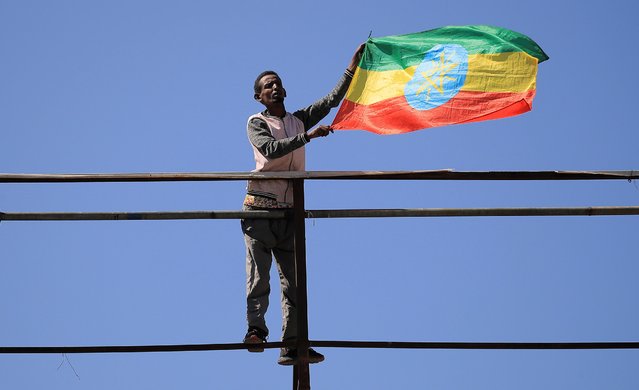 A pro-government demonstrator holds their national flag as people attend a rally to protest against the U.S. action over alleged human rights abuses during the conflict in the Tigray region, in Addis Ababa, Ethiopia on May 30, 2021. (Photo by Tiksa Negeri/Reuters) 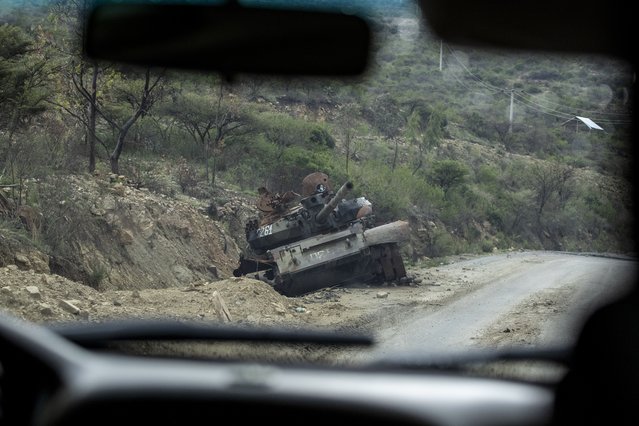 A destroyed tank sits by the side of a road leading to Abi Adi, in the Tigray region of northern Ethiopia, on Tuesday, May 11, 2021. The Tigray People’s Liberation Front was on top of a coalition that ruled Ethiopia for nearly three decades. That changed in 2018, when Prime Minister Abiy Ahmed rose to power as a reformist. Abiy alienated the TPLF with efforts to make peace with its archenemy, Eritrea, and rid the federal government of corruption. (Photo by Ben Curtis/AP Photo) 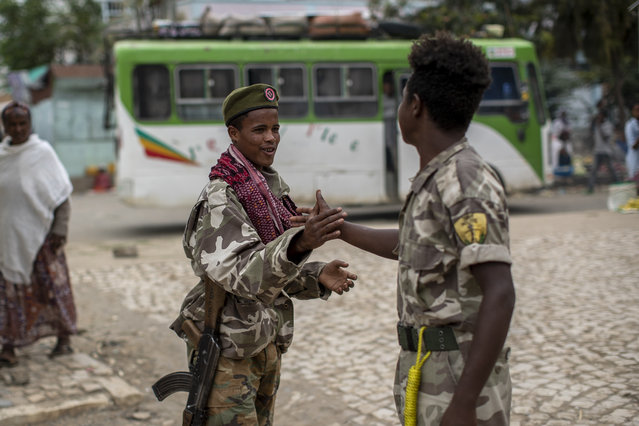 Fighters loyal to the Tigray People's Liberation Front (TPLF) greet each other on the street in the town of Hawzen, then-controlled by the group, in the Tigray region of northern Ethiopia, on Friday, May 7, 2021. The rural town is a microcosm of the challenge facing Prime Minister Abiy Ahmed – and a warning that the war here is unlikely to end anytime soon. (Photo by Ben Curtis/AP Photo) 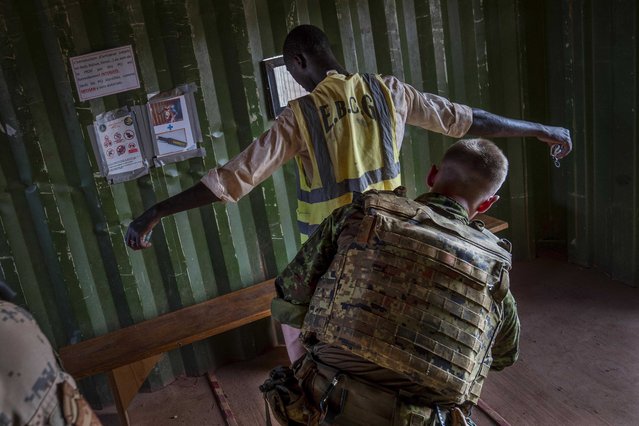 An Estonian Barkhane force soldier checks a Malian worker leaving the base after a day's work in Gao, eastern Mali, Sunday June 6, 2021. Col. Assimi Goita who retook control of Mali's transitional government May 24 2021 by forcing the resignations of the civilian transitional president and prime minister is to be inaugurated in the capital Bamako Monday June 7, 2021. Meanwhile, France has suspended joint military operations with Malian forces until the junta complies with international demands to restore civilian rule. (Photo by Jerome Delay/AP Photo) 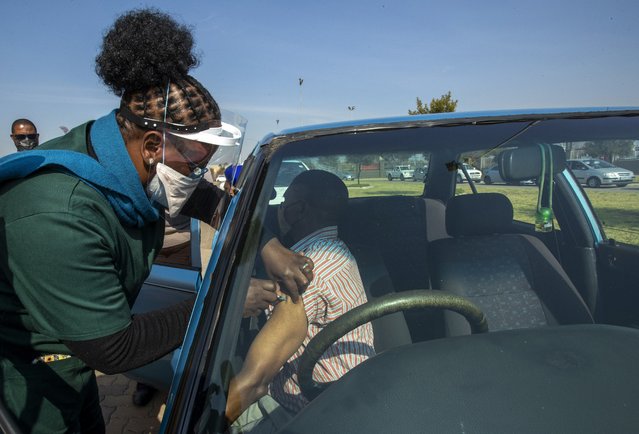 Health workers vaccinates a pensioner with a first dose of the Pfizer coronavirus vaccine at the newly-opened mass vaccination program for the elderly at a drive-thru vaccination center in Johannesburg, South Africa, Tuesday, May 25, 2021. (Photo by Themba Hadebe/AP Photo) 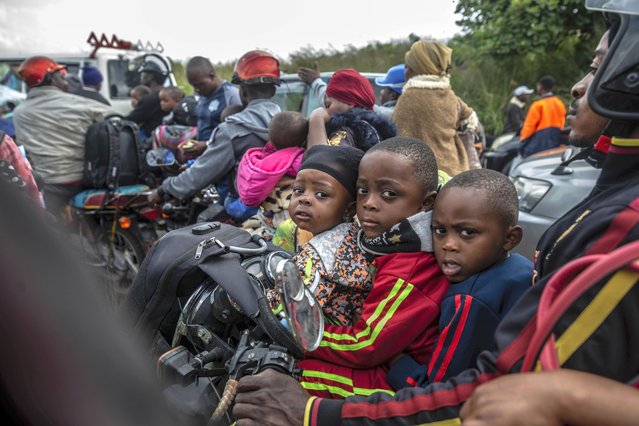 Residents flee Goma, Congo Thursday, May 27, 2021 , five days after Mount Nyiragongo erupted . A new eruption could occur at any moment, the military governor of Congo's North Kivu province, Lt. Gen. Constat Ndima Kongba, announced early Thursday. He ordered the evacuation of 10 of the 18 neighborhoods in the city of 2 million people. The center of Goma, which was spared when the volcano erupted last week, is now under threat, with activity being reported near the urban area and Lake Kivu, Kongba said. (Photo by Moses Sawasawa/AP Photo) 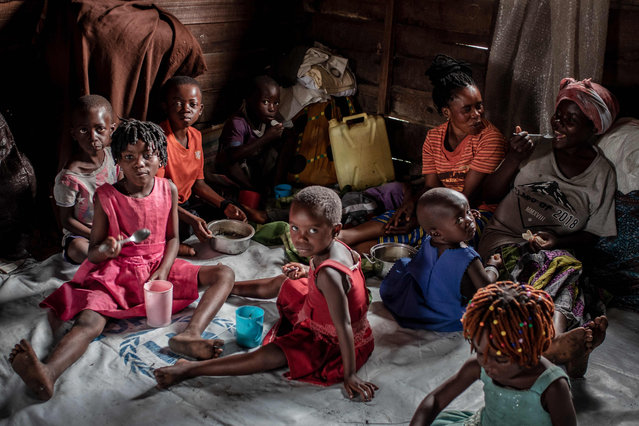 Displaced residents of Sake, 25 km northwest of Goma, eat food distributed by the citizen movement Lutte pour le changement (LUCHA) in a classroom where they have taken refuge, May 30, 2021. Hundreds of thousands of displaced people who fled Goma in the Democratic Republic of Congo after a volcanic eruption are at risk of infection by cholera, Doctors Without Borders (MSF) warned Sunday After the Nyiragongo volcano rumbled to life a week ago, fear of a second eruption spurred the government to issue an evacuation order Thursday that sent 400,000 residents fleeing. (Photo by Guerchom Ndebo/AFP Photo) 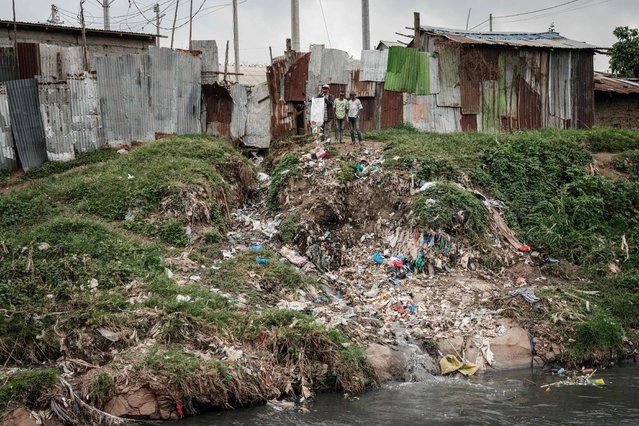 A man throws rubbish on the banks of the Nairobi River in Dandora slum in Nairobi on June 5, 2021, on World Environment Day. (Photo by Yasuyoshi Chiba/AFP Photo) 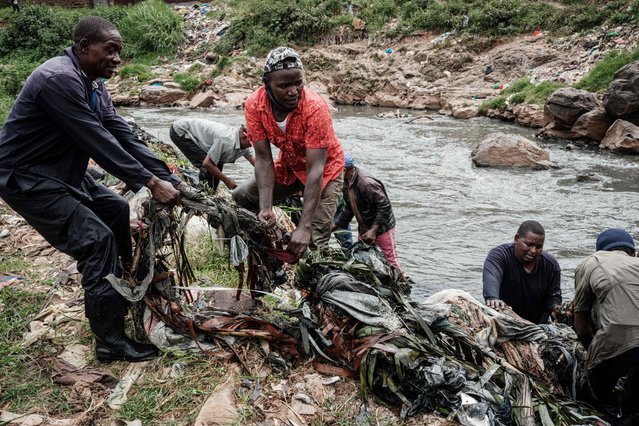 Members of the local voluntary group, the Canaan Riverside Green Peace, remove debris from the Nairobi River after rains at Dandora slum in Nairobi on June 5, 2021, on World Environment Day. Every weekend for the past two years, the group has cleaned the filthy river and planted about five hundred trees to create a forest which filters the smoke from a dumping site nearby. (Photo by Yasuyoshi Chiba/AFP Photo) 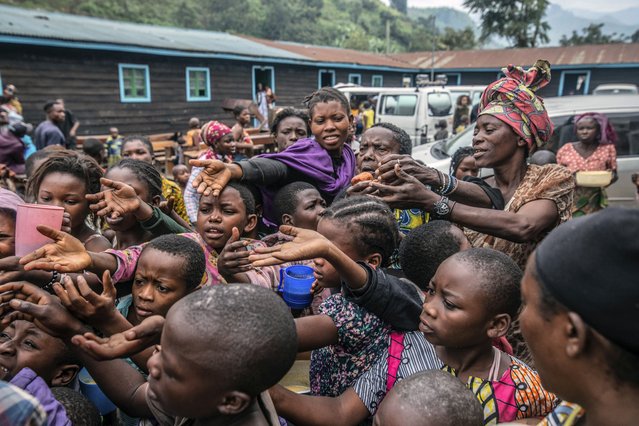 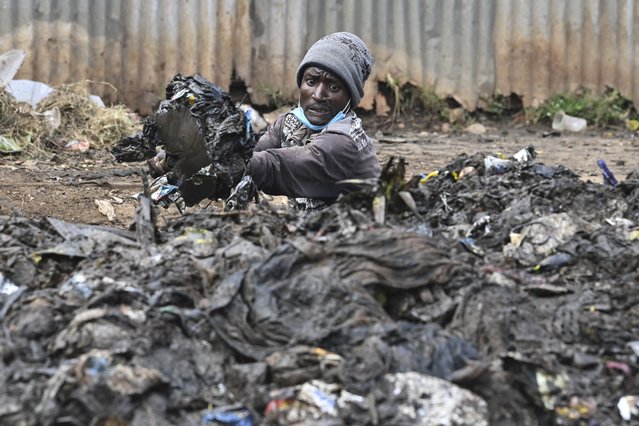 A Kenyan environment activist unclogs drainage ahead of World Environmental Day celebrations in Riruta, Nairobi, on June 4, 2021. World Environment Day is the United Nations day for encouraging worldwide awareness and action to protect our environment. (Photo by Simon Maina/AFP Photo) 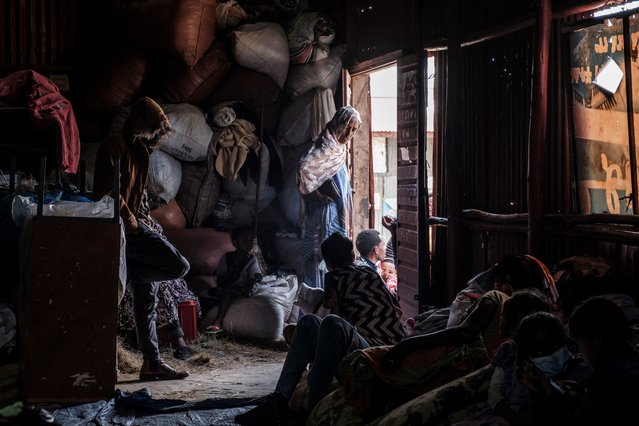 Internally displaced people socialise at the temporary shelter where they live, in Debre Berhan, Ethiopia, on May 14, 2021. More than 100 civilians died in a recent flare-up of violence in the town of Ataye that also saw the assailants torch more than 1,500 buildings.
Some of the people fleeing from the violence in Ataye have taken refuge in Debre Berhan. (Photo by Eduardo Soteras/AFP Photo) 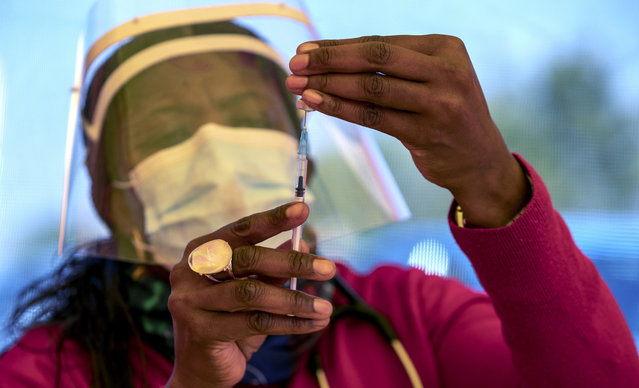 A health worker prepares a dose of the Pfizer coronavirus vaccine at the newly-opened mass vaccination program for the elderly at a drive-thru vaccination center outside Johannesburg, South Africa, Tuesday, May 25, 2021. South Africa aims to vaccinate 5 million of its older citizens by the end of June. (Photo by Themba Hadebe/AP Photo) Ethiopians protest against international pressure on the government over the conflict in Tigray, at a demonstration organised by the city mayor's office held at a stadium in the capital Addis Ababa, Ethiopia Sunday, May 30, 2021. Thousands of Ethiopians gathered Sunday to protest outside pressure on the government over its brutal war in Tigray, after the U.S. said last week it has started restricting visas for government and military officials of Ethiopia and Eritrea who are seen as undermining efforts to resolve the fighting. (Photo by Mulugeta Ayene/AP Photo) 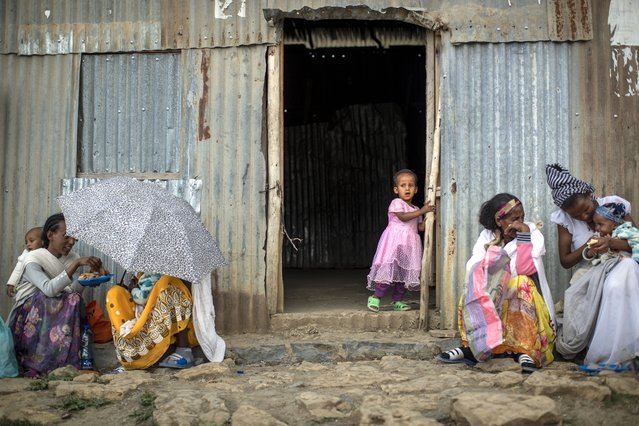 A Tigrayan girl looks out of a doorway as others sit next to a metal shack at a reception center for the internally-displaced in Mekele, in the Tigray region of northern Ethiopia, on Sunday, May 9, 2021. Despite claims by both Ethiopia and Eritrea that they were leaving, Eritrean soldiers are in fact more firmly entrenched than ever in Tigray, The Associated Press has found. (Photo by Ben Curtis/AP Photo) 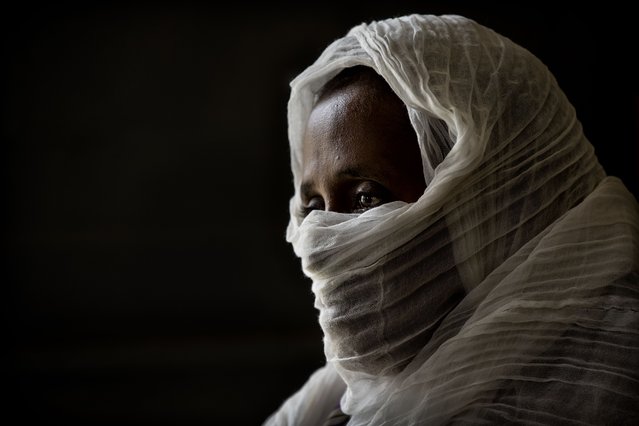 A 40-year-old woman who was says she was held captive and repeatedly raped by 15 Eritrean soldiers over a period of a week in a remote village near the Eritrea border, speaks during an interview at a hospital in Mekele, in the Tigray region of northern Ethiopia, on Friday, May 14, 2021. “They talked to each other. Some of them: 'We kill her.' Some of them: 'No, no. Rape is enough for her'”, she recalls. She said one of the soldiers told her: “This season is our season, not your season. This is the time for us”. (Photo by Ben Curtis/AP Photo) 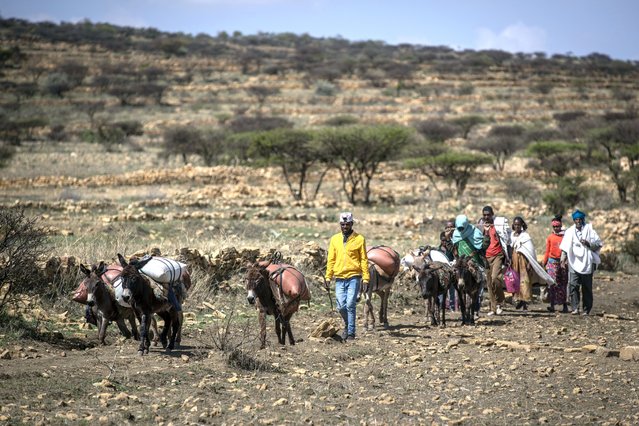 People walk from a rural area down a path across stony farmland towards a nearby town where a food distribution operated by the Relief Society of Tigray was taking place, near the town of Agula, in the Tigray region of northern Ethiopia Saturday, May 8, 2021. (Photo by Ben Curtis/AP Photo) 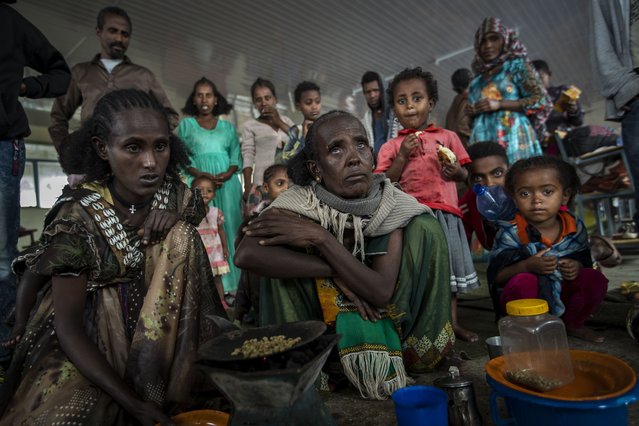 Tigrayan women Tarik, 60, center, and Meresaeta, left, who fled from the town of Samre, roast coffee beans over a wood stove in a classroom where they now live at the Hadnet General Secondary School which has become a makeshift home to thousands displaced by the conflict, in Mekele, in the Tigray region of northern Ethiopia Wednesday, May 5, 2021. For months, both Ethiopia and Eritrea denied the presence of Eritrean soldiers in Tigray but Ethiopia’s Prime Minister Abiy Ahmed later acknowledged in March that Eritrean troops were “causing damages to our people”. (Photo by Ben Curtis/AP Photo) 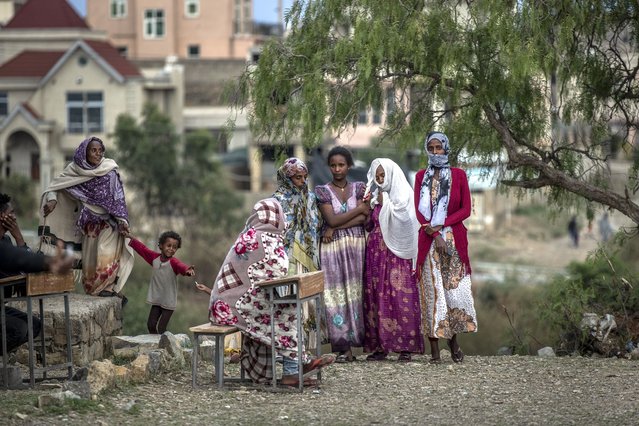 Tigrayan women gather to talk at a camp for the internally-displaced in an elementary school in Mekele, in the Tigray region of northern Ethiopia Monday, May 10, 2021. Despite claims by both Ethiopia and Eritrea that they were leaving, Eritrean soldiers are in fact more firmly entrenched than ever in Tigray, The Associated Press has found. (Photo by Ben Curtis/AP Photo) 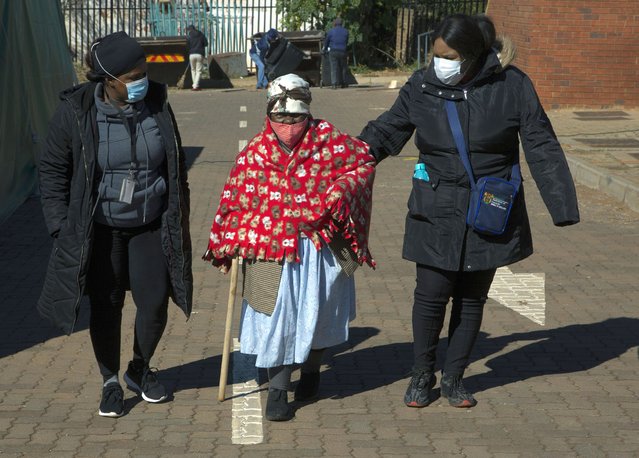