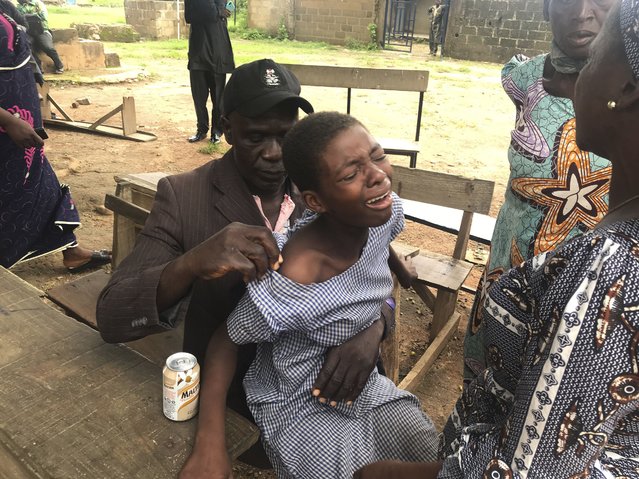 Parents are reunited with released students of the Bethel Baptist High School in Damishi, Nigeria, on Sunday, July 25, 2021. Armed kidnappers in Nigeria have released 28 of the more than 120 students who were abducted at the beginning of July from the Bethel Baptist High School in the northern town of Damishi. Church officials handed those children over to their parents at the school on Sunday. (Photo by AP Photo/Stringer) 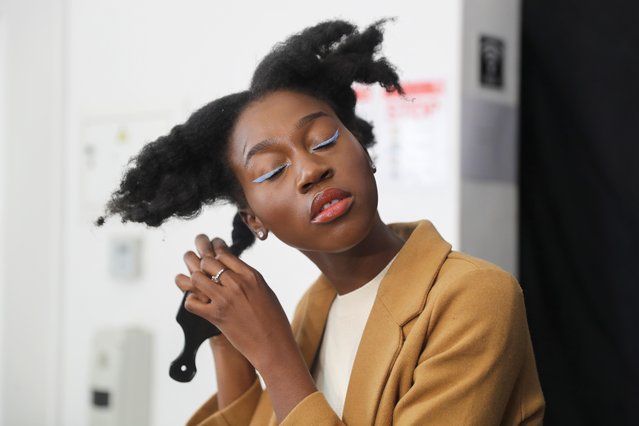 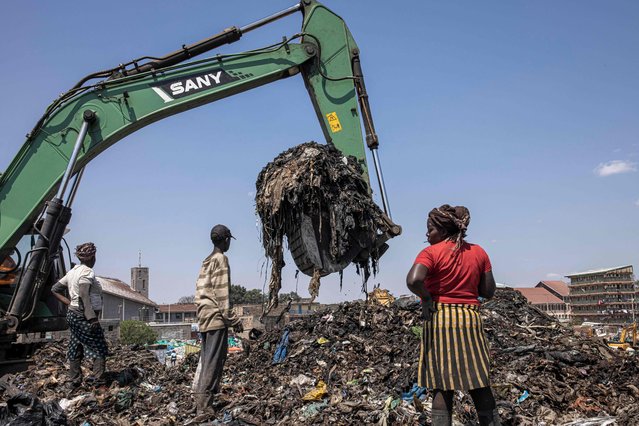 An excavator moves garbage at a dumping site near Dandora informal settlement in Nairobi, Kenya, on July 24, 2021. The Environment and Land Court ordered the closing of the Dandora dumpsite within six months and directed Nairobi Metropolitan Services (NMS) to establish a new dumping site that will follow environmental guidelines. (Photo by Patrick Meinhardt/AFP Photo) 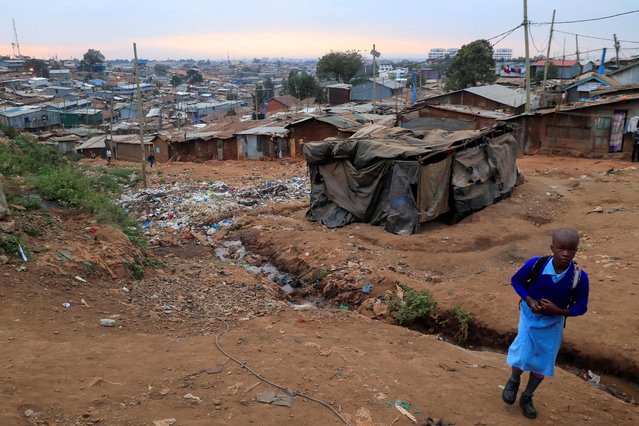 A girl walks to school during the reopening of schools, for the delayed academic year 2021, amid the novel coronavirus disease (COVID-19) pandemic, in Kibera slums of Nairobi, Kenya on July 26, 2021. (Photo by Thomas Mukoya/Reuters) 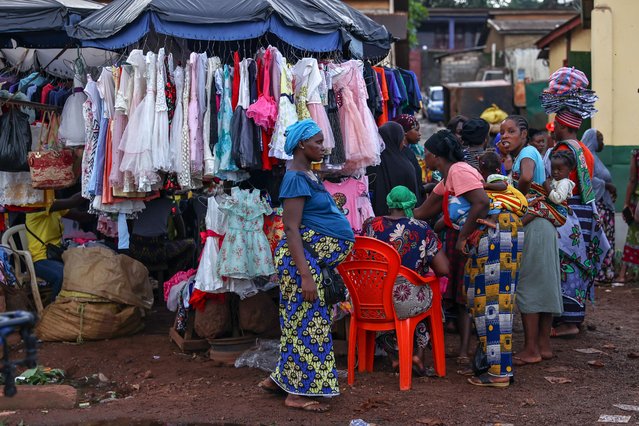 Guinean women are seen as women in Guinea, one of the poorest countries in the world despite its fertile lands with gold, diamond and boron mines, work hard to support their families and raise their children in Conakry, Guinea on July 27, 2021. The name Guinea means “woman” in the local language in the country, women are the biggest part of daily life. (Photo by Ozkan Bilgin/Anadolu Agency via Getty Images) 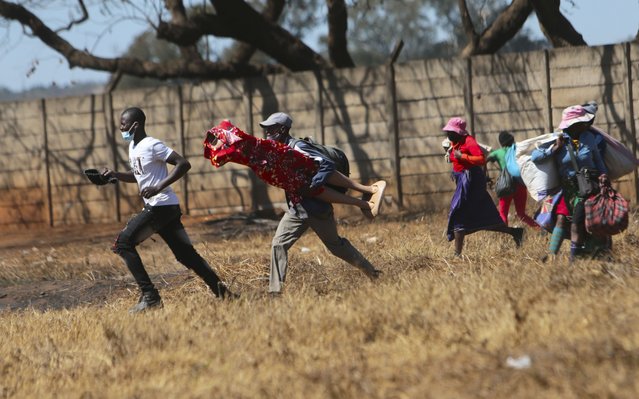 Zimbabwean vendors flee from the police after they were chased away from selling their wares from undesignated areas due to COVID-19 restrictions in Harare, Thursday July 29, 2021. (Photo by Tsvangirayi Mukwazhi/AP Photo) 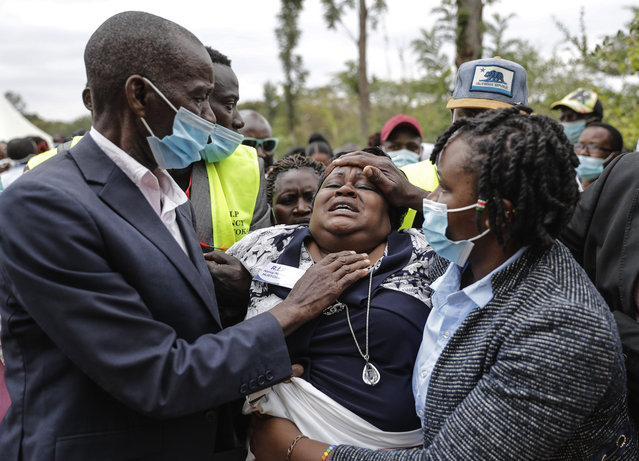 A relative cries as mourners prepare to bury coronavirus victim Nancy Ndanu Musyoka 27 years old with her daughter Jaylla Musyoka in Kakungu village, Kitui county, Kenya, Wednesday, July 28, 2021. Nancy, a high school teacher started feeling unwell and was taken to Kitui referral Hospital with breathing complications where she succumbed to covid 19 due to lack of oxygen in the hospital. According to WHO Kenya has been experiencing dengue fever outbreaks every year for the last five years. (Photo by Brian Inganga/AP Photo) 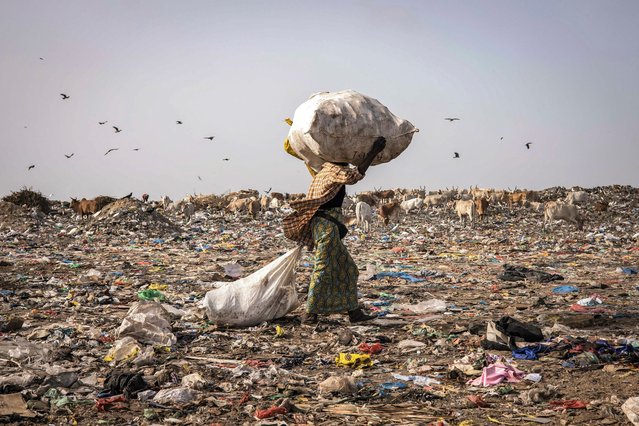 A waste picker walks with a load of recyclable waste on her head in the Mbeubeuss rubbish dump in Dakar on July 14, 2021. Almost all of it ends up in Mbeubeuss, a landfill about 30 kilometres (18 miles) from the centre which has a notorious reputation as an environmental hazard. Pickers set fire to the rubbish to find valuable metals, for example, spewing noxious fumes onto neighbouring residential areas. (Photo by John Wessels/AFP Photo) 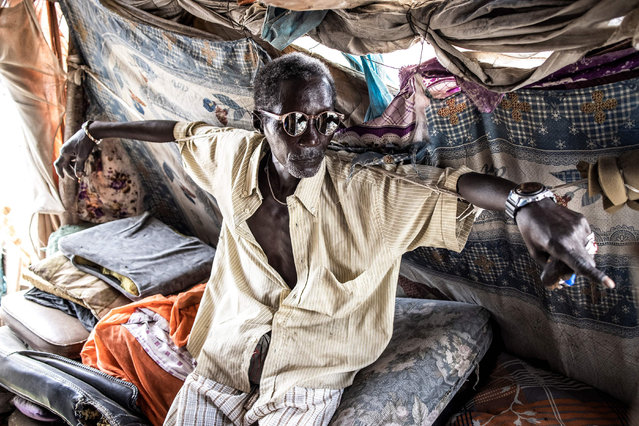 Pape Ndiaye (66), an old waste picker and spokesman for the waste pickers association, rests in his makeshift office in the Mbeubeuss rubbish dump in Dakar on July 14, 2021. (Photo by John Wessels/AFP Photo) 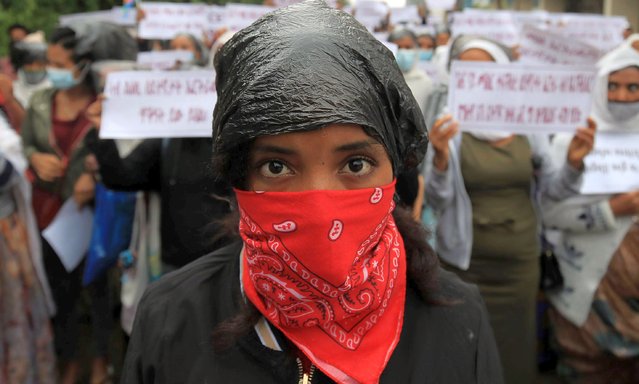 Eritrean Refugees protest in-front of the United Nations High Commissioner for Refugees (UNHCR) offices to condemn the attacks on the refugees in Hitsats and Shimelba camps during the fight between Ethiopia's National Defence Force and Tigray People Liberation Front (TPLF) in Addis Ababa, Ethiopia on July 29, 2021. (Photo by Tiksa Negeri/Reuters) 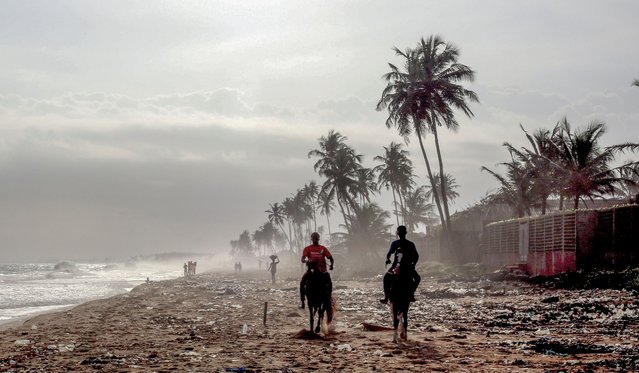 People ride horses on a beach in Abidjan, Ivory Coast on July 28, 2021. (Photo by Mehmet Kaman/Anadolu Agency via Getty Images) 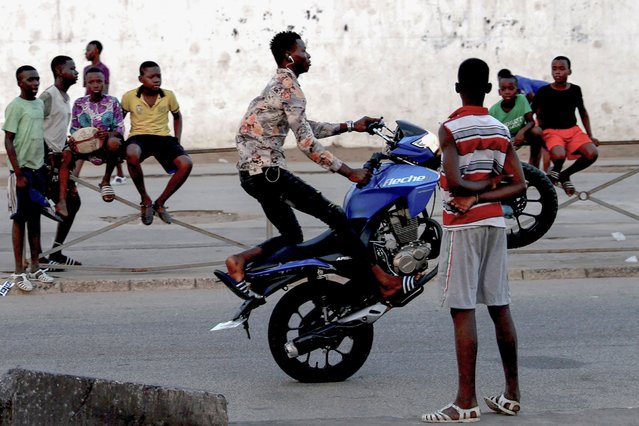 A youth performs on a motorcycle on a street in Abidjan, Ivory Coast on July 28, 2021. (Photo by Mehmet Kaman/Anadolu Agency via Getty Images) 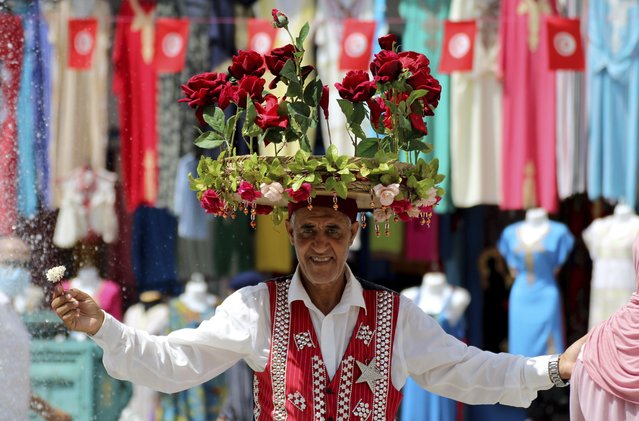 A flower seller is pictured at the old market in Tunis, Tunisia, Friday, July 30, 2021. Days of political turmoil in Tunisia over the economy and the coronavirus have left its allies in the Middle East, Europe and the United States watching to see if the fragile democracy will survive. (Photo by Hassene Dridi/AP Photo) 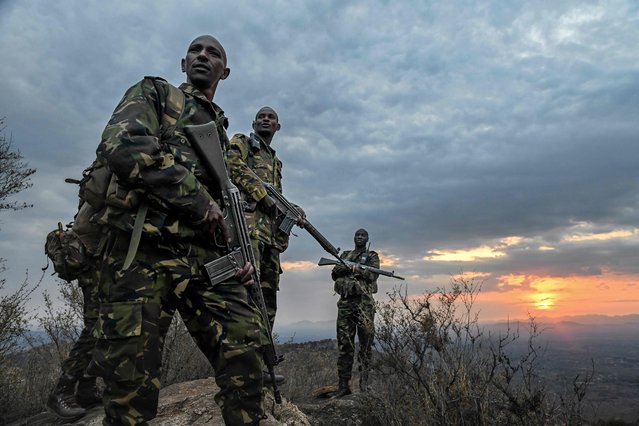 Armed officers of Lewa Wildlife Conservancy's (LWC) anti-poaching unit look out from a ridge at dawn in Meru, on July 31, 2021, as they wind up their nightly security patrol against poaching and illegal incursions into the conservancy. Despite the global condemnation of poaching and the resources that have been mobilised to safeguard endangered wildlife, well-funded and well-equipped poaching groups continue to pose a real threat to Africa’s wildlife. (Photo by Tony Karumba/AFP Photo) 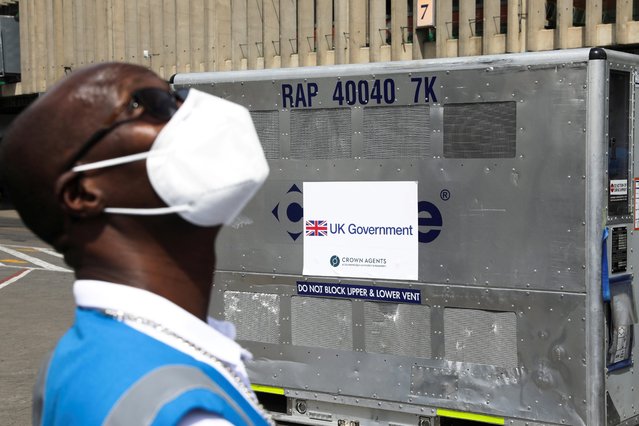 A health official stands next to a refrigerated container holding a shipment of more than 400,000 doses of the AstraZeneca/Oxford coronavirus disease (COVID-19) vaccine, donated to Kenya by the the British government, at the Jomo Kenyatta International Airport in Nairobi, Kenya, July 31, 2021. (Photo by Baz Ratner/Reuters) 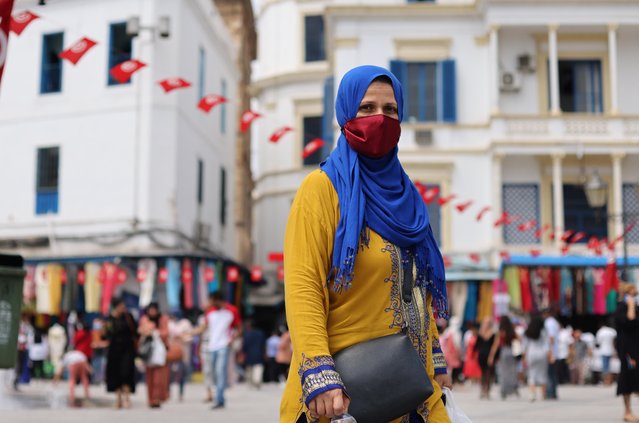 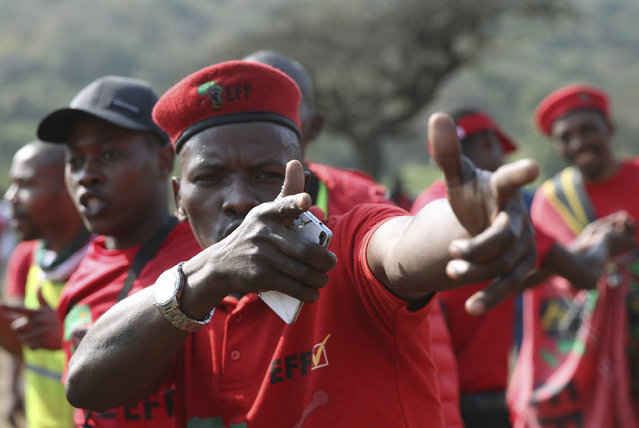 A protester gestures, as supporters of South Africa's leftist opposition party, the Economic Freedom Fighters, gather in Phoenix, South Africa, Thursday, August 5, 2021, during a demonstration against the killings of 36 people in Phoenix, a suburb of Durban, during the recent violent riots in KwaZulu-Natal province. More than 1,000 people marched through Phoenix to hand police a statement demanding justice for the families of those who were killed in that town during the violence. (Photo by AP Photo/Stringer) 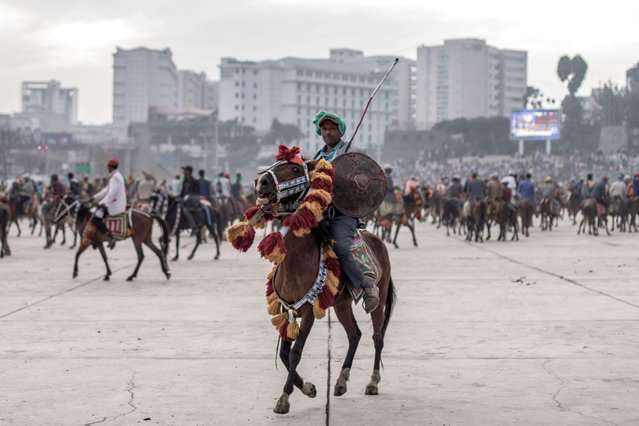 A horse rider attend a rally against pro-TPLF forces (Tigray People's Liberation Front) and to support for Ethiopia's armed forces in Addis Ababa on August 08, 2021. (Photo by Amanuel Sileshi/AFP Photo) 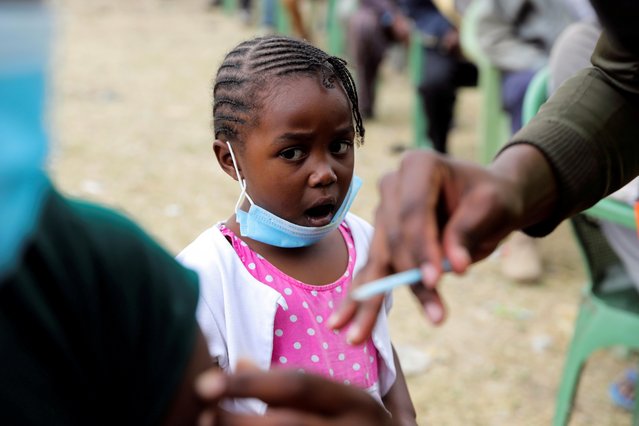 A girl reacts as her father receives an AstraZeneca/Oxford coronavirus disease (COVID-19) vaccine, donated to Kenya by the UK government, in Nairobi, Kenya, August 8, 2021. (Photo by Baz Ratner/Reuters) 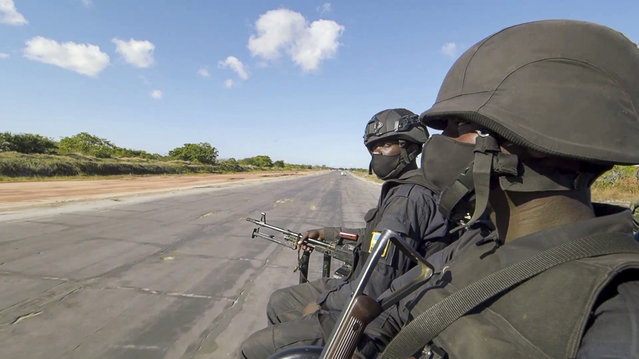 In this image made from video, Rwandan troops travel by road near the airstrip in Afungi, Cabo Delgado province, Mozambique Saturday, August 7, 2021. A joint force of Mozambican and Rwandan troops has regained control of the strategic port of Mocimboa da Praia from Islamic extremists who held the town in northern Mozambique for a year, the countries' defense ministries have announced. (Photo by Marc Hoogsteyns/AP Photo)
Edit Del
19 Aug 2021 09:19:00, post received 0 comments
Publication archive:
←   →
Popular tags:
All tags
Last searches: