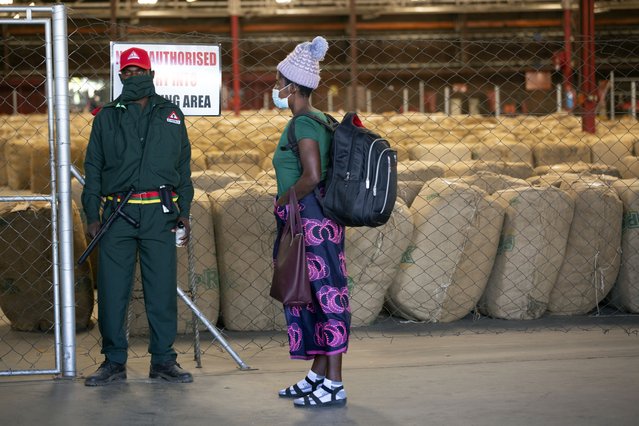 A security guard stands at the entrance of a tobacco auction floor in Harare, Thursday, April 8, 2021. Zimbabwe’s tobacco is flourishing again. And so are the auctions where merchants are fetching premium prices for the “golden leaf” that is exported around the world. Many of the small-scale farmers complain they are being impoverished by middlemen merchants who are luring them into a debt trap. (Photo by Tsvangirayi Mukwazhi/AP Photo) 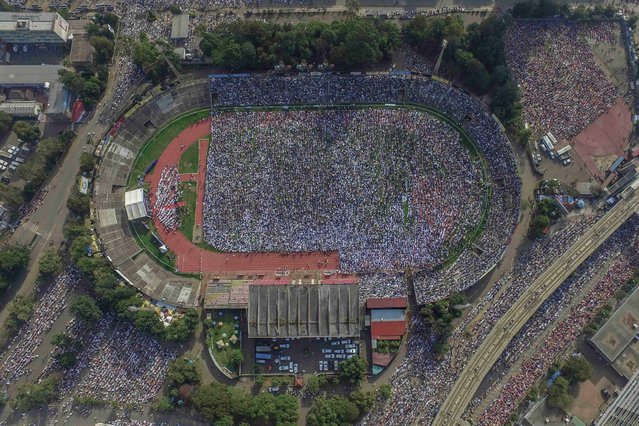 This aeriel view shows Muslim worshippers listening to the Eid al-Fitr morning prayer sermon at a soccer stadium in Addis Ababa, Ethiopia, on May 13, 2021 as Muslims across the globe mark the end of the Holy month of Ramadan. (Photo by Amanuel Sileshi/AFP Photo) 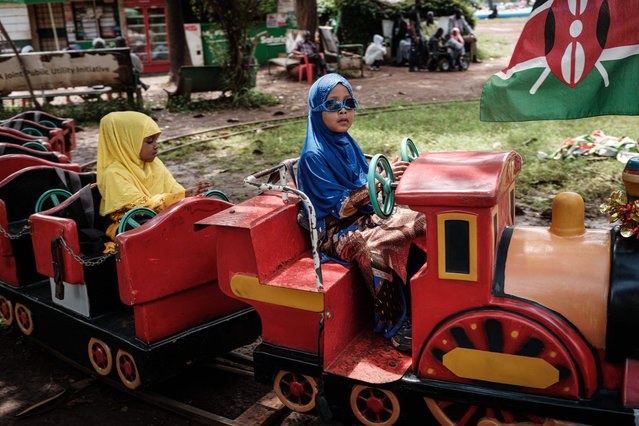 Muslim girls ride on a mini train after attending the Eid Al-Fitr prayer that marks the end of the Holy month of Ramadan at Uhuru Park in Nairobi, Kenya, on May 13, 2021. (Photo by Yasuyoshi Chiba/AFP Photo) 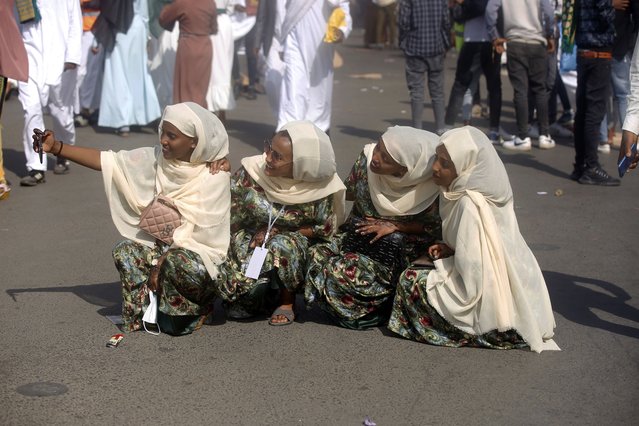 Muslims arrive to perform Eid al-Fitr prayer within precautions against the novel coronavirus (COVID-19) pandemic, in Ethiopia, Addis Ababa on May 13, 2021. (Photo by Minasse Wondimu Hailu/Anadolu Agency via Getty Images) 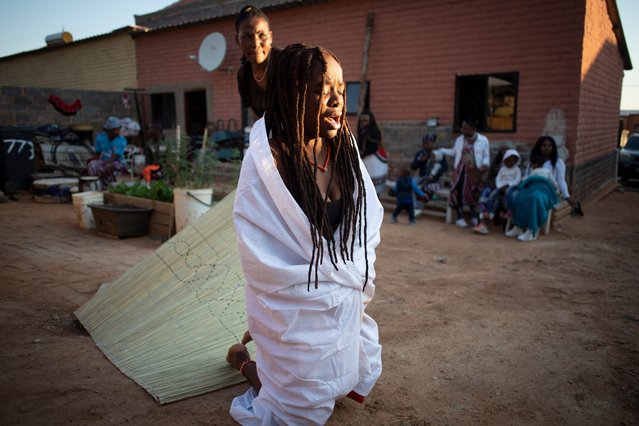 “Sangoma” initiate Dipuo Banda (C) is led out of her teachers shack while she remains in a trance like state prior to dancing during her 3 day initiation ceremony with her teacher, family, friends and students in the Alexandra Township in Johannesburg, South Africa, 14 May 2021. Sangomas, the Zulu term for Medicine Women or traditional healers, fulfill different social and political roles in the community, including divination, physical healing, emotional and spiritual illnesses, directing birth or death rituals and finding lost cattle. (Photo by Kim Ludbrook/EPA/EFE) 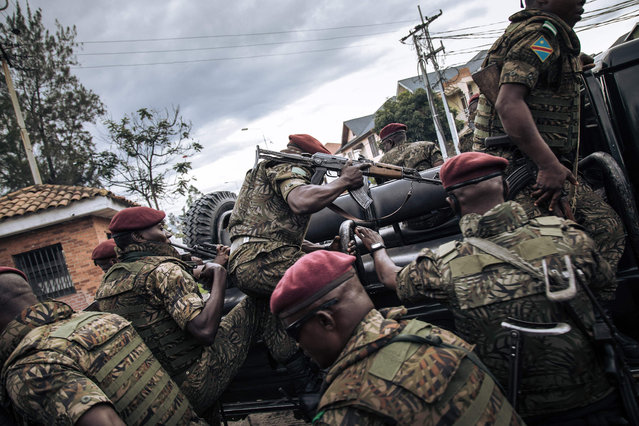 Congolese soldiers jump into a moving vehicle to escort General Constant Ndima after he took office as military governor of North Kivu province, northeastern Democratic Republic of Congo on May 10, 2021. The Democratic Republic of Congo's presidency on May 3 ordered military and police officers to take over civil authorities in two regions that have been declared under a “state of siege”. In North-Kivu and Ituri, dozens of armed groups operate and civilians have been subject to horrifying massacres. (Photo by Alexis Huguet/AFP Photo) 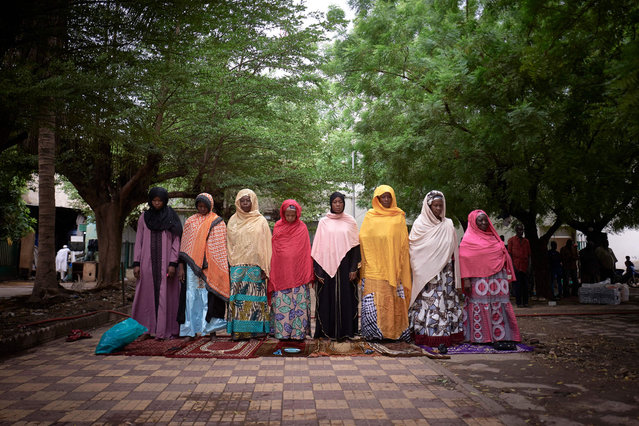 A group of women is seen praying in the courtyard of the Roi Faycal Bin Abdoulaziz Mosque during Eid al-Fitr, the holiday that marks the end of the Holy Month of Ramadan, in Bamako on May 12, 2021. (Photo by Michele Cattani/AFP Photo) 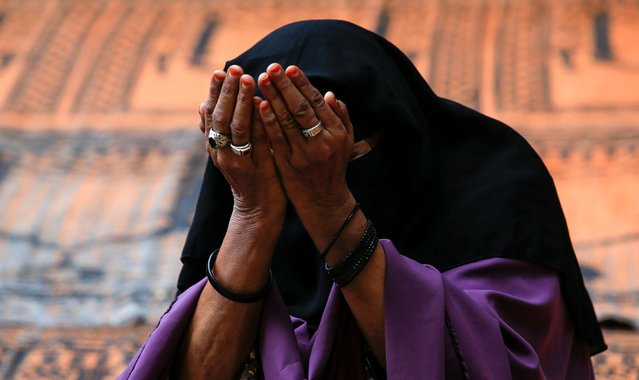 A Muslim faithful performs Eid prayers, amid the coronavirus disease (COVID-19) pandemic, on the first day of Eid al-Fitr, at the Masjid Noor Mosque in Nairobi, Kenya on May 13, 2021. (Photo by Monicah Mwangi/Reuters) 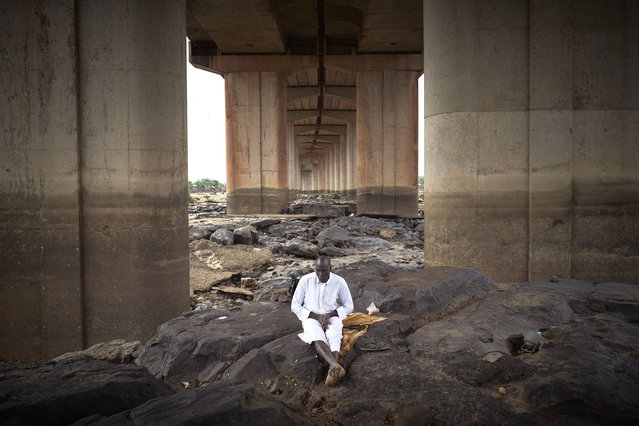 The Imam of the Mosque in Soutadounou is seen meditating under the third bridge of Bamako, during the Eid al-Fitr, the holiday that marks the end of the Holy Month of Ramadan, on May 12, 2021. (Photo by Michele Cattani/AFP Photo) 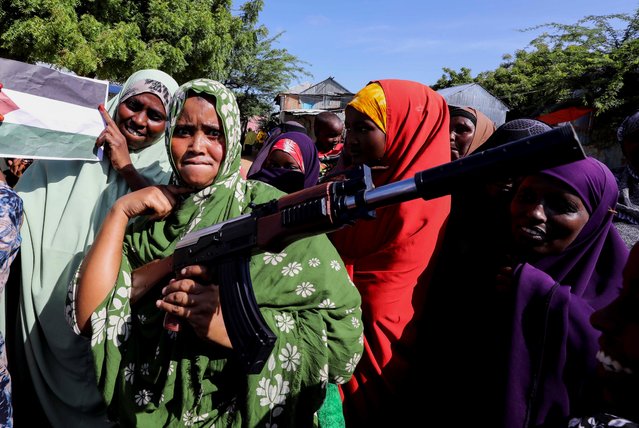 Pro-Palestinian supporters react as they protest following a flare-up of Israeli-Palestinian violence, in Hodan district of Mogadishu, Somalia on May 14, 2021. (Photo by Feisal Omar/Reuters) 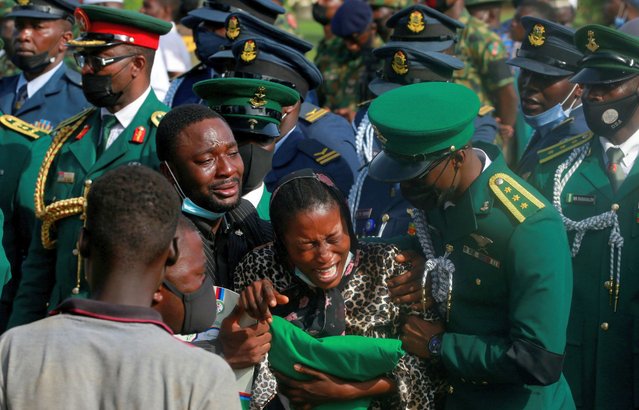 A woman reacts during the burial of victims of a military airplane crash carrying Nigeria's army chief, Lieutenant General Ibrahim Attahiru, and ten other officers, in Abuja, Nigeria on May 22, 2021. (Photo by Afolabi Sotunde/Reuters) 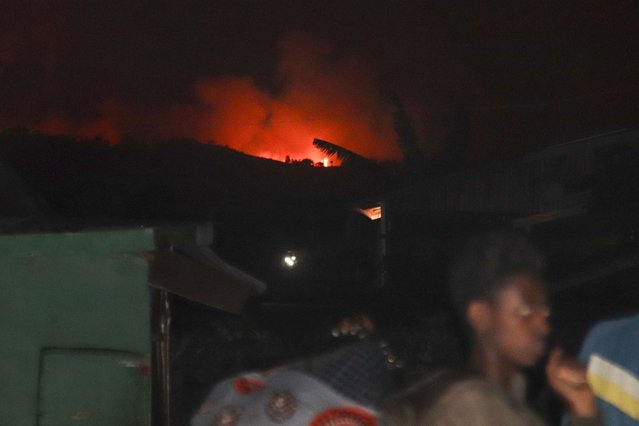 People flee as the night sky is turned red by the eruption of Mount Nyiragongo, in Goma, Congo, Saturday, May 22, 2021. Congo's Mount Nyiragongo erupted for the first time in nearly two decades Saturday, turning the night sky a fiery red and sending lava onto a major highway as panicked residents tried to flee Goma, a city of nearly 2 million. (Photo by Justin Kabumba/AP Photo) 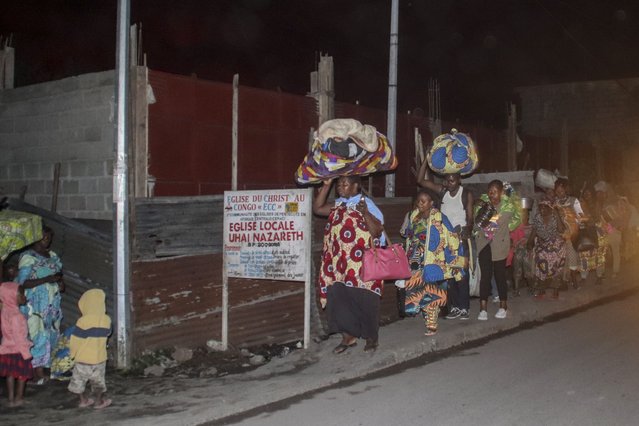 People flee with their belongings after the eruption of Mount Nyiragongo, in Goma, Congo, Saturday, May 22, 2021. (Photo by Justin Kabumba/AP Photo) 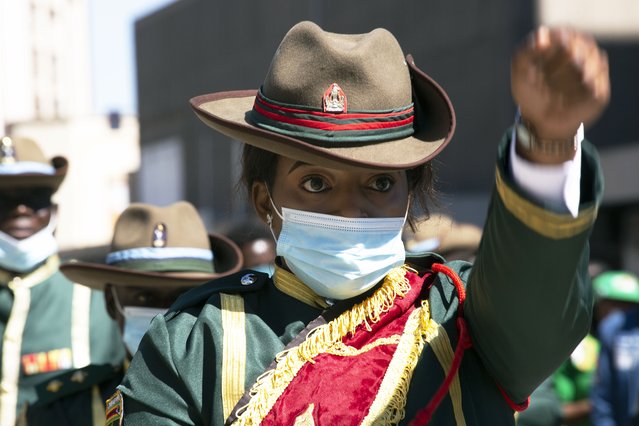 A member of the presidential guard marches during the unveiling of the statue of Charwe Nyakasikana in Harare, Tuesday, May, 25, 2021. Zimbabwe’s president vowed to ensure the repatriation of the skull of a 19th-century anti-colonialist heroine who was hanged for leading resistance to white occupation, as he unveiled her bronze statue. Nehanda Charwe Nyakasikana, more widely known as Mbuya (grandmother in Shona) Nehanda, was hanged in 1898 for leading an anti–colonial rebellion. (Photo by Tsvangirayi Mukwazhi/AP Photo) 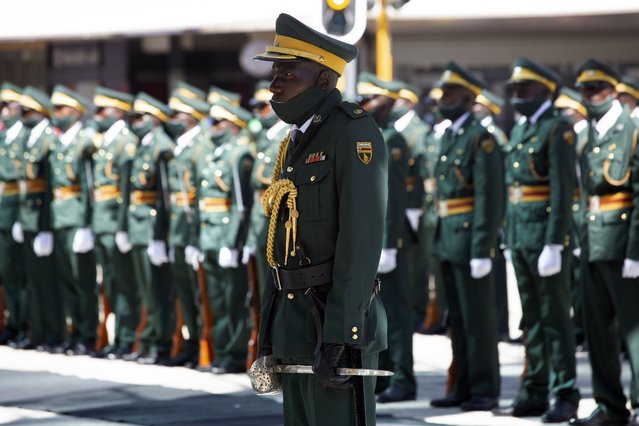 A member of the presidential guard stands guard during the unveiling of the statue of Charwe Nyakasikana in Harare, Tuesday, May, 25, 2021. (Photo by Tsvangirayi Mukwazhi/AP Photo) 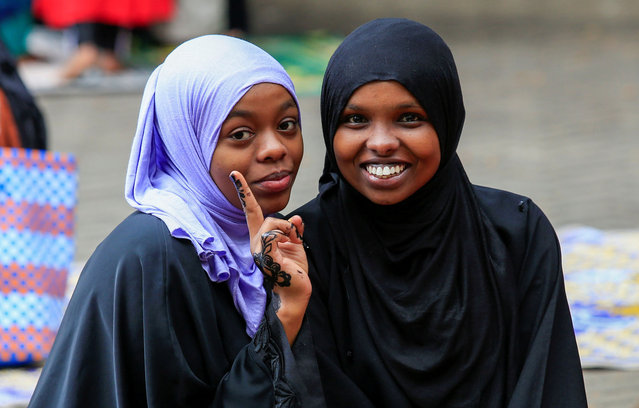 Muslims pose for a photograph after performing the Eid prayers, amid the coronavirus disease (COVID-19) pandemic, on the first day of Eid al-Fitr, at the Masjid Noor Mosque in Nairobi, Kenya on May 13, 2021. (Photo by Monicah Mwangi/Reuters) 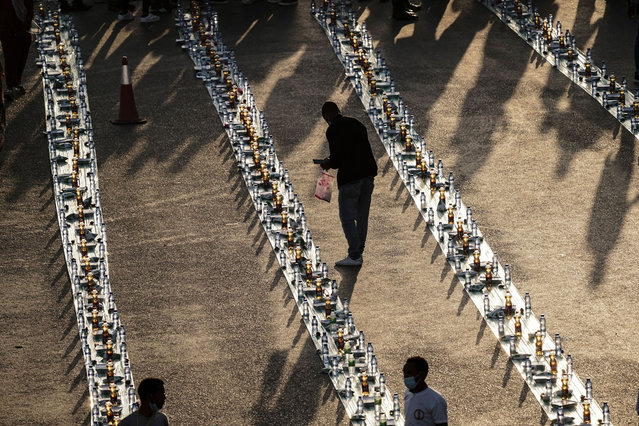 A Muslim volunteer distributes soft drinks in Addis Ababa, Ethiopia, on May 11, 2021 at Meskel square to break fast at sunset during the holy Muslim month of Ramadan. Tens of thousands of Ethiopian Muslims gathered at a central square in the capital for a massive evening iftar meal, praying for peace at a time of national upheaval. Muslims make up about one third of the country's population of 110 million, outnumbered by Orthodox Christians. Tuesday's event, the Grand Ethiopian Street Iftar, was originally supposed to happen on Sunday night, but security forces wielding batons and tear gas broke it up. The government said the altercations were a result of a miscommunication between officials and organizers, but some Muslims leaders said they took offense at the slight. (Photo by Amanuel Sileshi/AFP Photo) 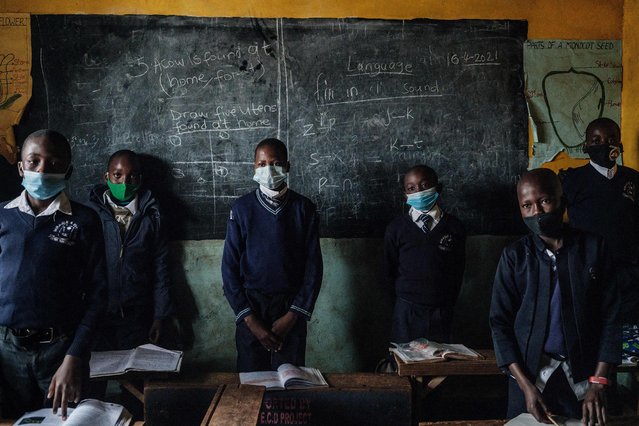 Students of Miracle and Victory Children Centre, a private primary school for orphans, stand up to greet their teacher as schools reopen after a 6 weeks break following the directive by Kenyan President Uhuru Kenyatta's to curb the spread of the Covid-19 coronavirus, in Kibera slum, Nairobi, on May 10, 2021. (Photo by Yasuyoshi Chiba/AFP Photo) 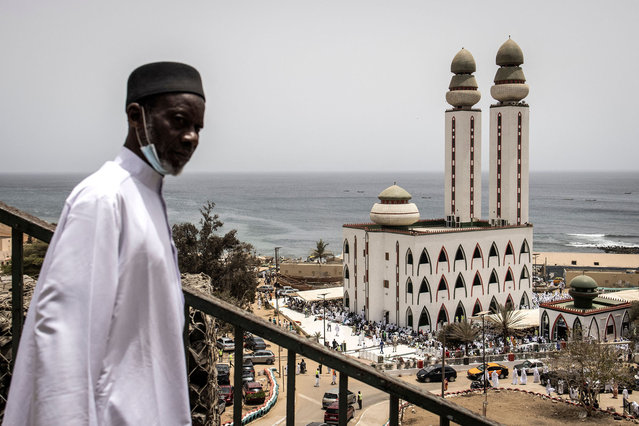 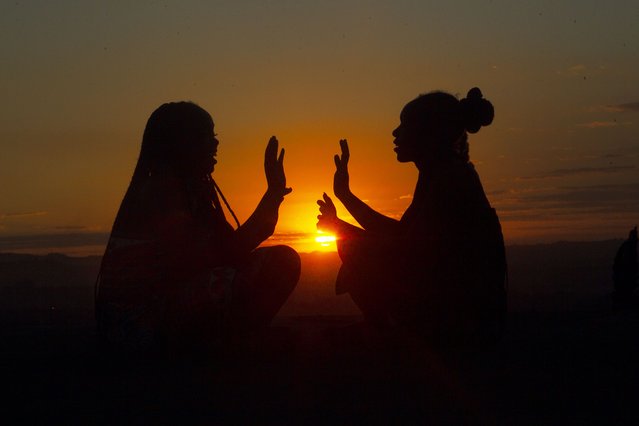 Two girls have fun while playing on top of a hill at sunset on Africa Day in Harare, Tuesday, May, 25, 2021. Zimbabwe marked Africa Day along with the rest of the continent, by celebrating the progress that Africa has made while reflecting upon the common challenges that the continent faces in a global environment. (Photo by Tsvangirayi Mukwazhi/AP Photo)
Edit Del
28 May 2021 08:13:00, post received 0 comments
Publication archive:
←   →
Popular tags:
All tags
Last searches: