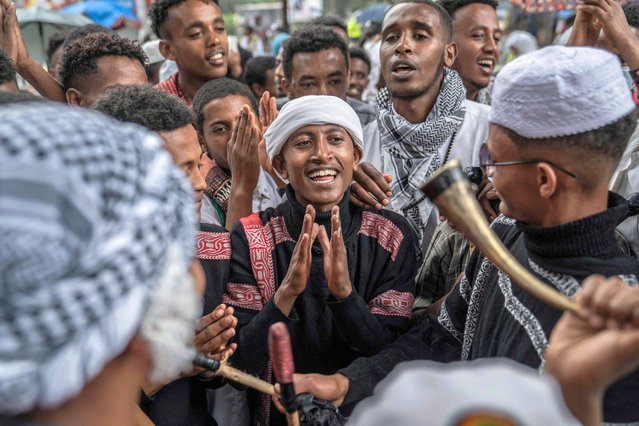 Muslim worshippers sing songs during the Eid al-Adha prayers on the first day of the feast celebrated by Muslims worldwide, at the outskirts of a soccer stadium in Addis Ababa, Ethiopia, on July 9, 2022. (Photo by Amanuel Sileshi/AFP Photo) 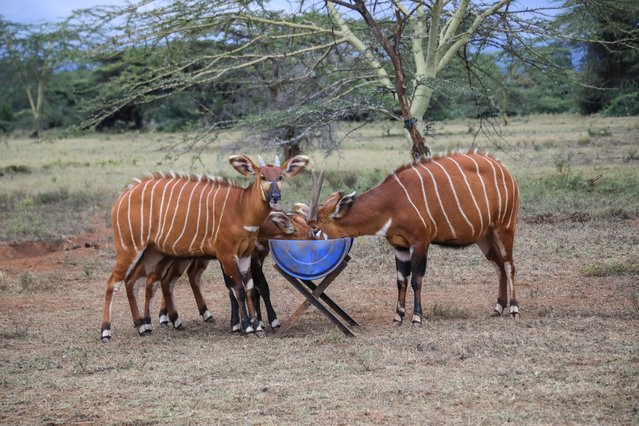 Critically endangered Mountain Bongos are seen eating pellets at the Mount Kenya Wildlife Conservancy in Nyanyuki, Kenya on July 9, 2022. The population of the mountain bongos is 66 in the conservancy and less than 100 worldwide according to a recent wildlife census report. (Photo by John Ochieng/SOPA Images/Rex Features/Shutterstock) 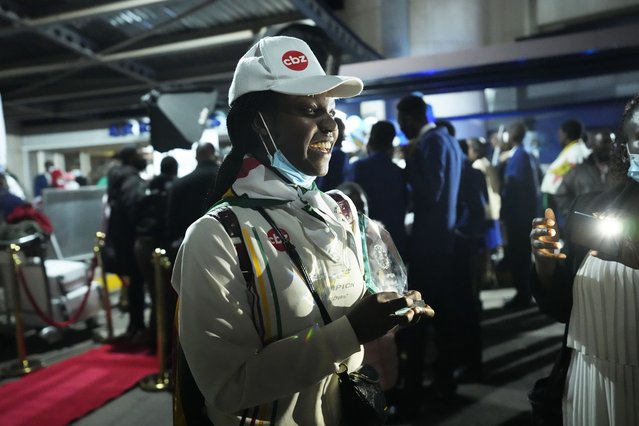 Ruvimbo Simbi, captain of the Zimbabwean high school World and European moot court competition champions smiles, as they arrive back at the Robert Mugabe International airport in Harare, Thursday, July, 7, 2022. A history-making team of Zimbabwean high school students that became world and European moot court competition champions has been widely praised in a country where the education system is beset by poor funding, lack of materials and teachers’ strikes. (Photo by Tsvangirayi Mukwazhi/AP Photo) 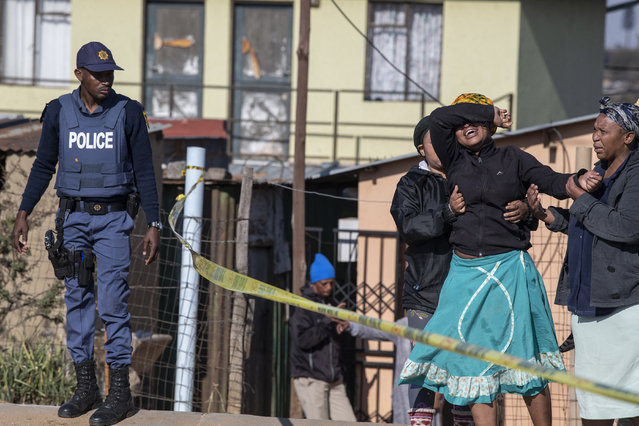 A relative of one of the victims cries as south African Police Service officers refuse to let her cross the police barrier and enter the crime scene in Soweto, South Africa, on July 10, 2022. Fourteen people were killed during a shootout in a bar in Soweto police said on July 10, 2022. Police lieutenant Elias Mawela said that they were called in the early hours in the morning, around 12:30am after the shooting overnight Saturday and Sunday. When police arrived at the scene, 12 people were confirmed dead. 11 others were taken to hospital with wounds but two later died, raising the death toll to 14. (Photo by Ihsaan Haffejee/AFP Photo) 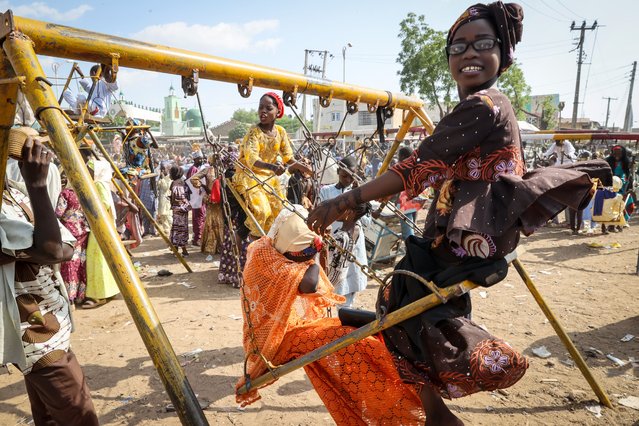 Children enjoy at a park in Kano, located in northern Nigeria and the capital of Kano State, Nigeria on July 11, 2022. (Photo by Mehmet Kaman/Anadolu Agency via Getty Images) 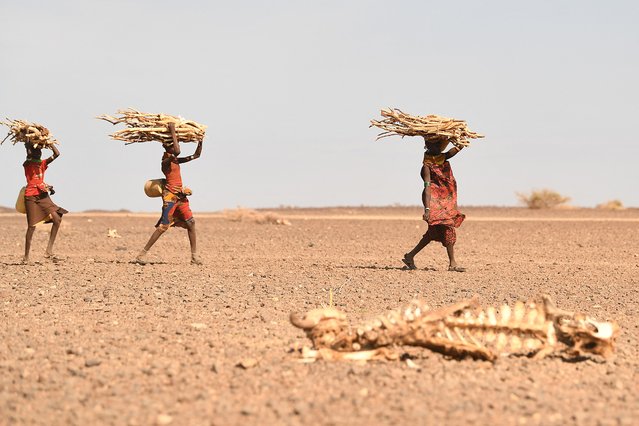 Turkana women carrying firewood walk past a carcass of a cow, in the area of Loiyangalani, which is the worst affected by the prolonged drought, in Marsabit, northern Kenya, on July 12, 2022. Four consecutive seasons of poor rains have left millions of drought-stricken people in Kenya, Somalia and Ethiopia facing starvation. (Photo by Simon Maina/AFP Photo) 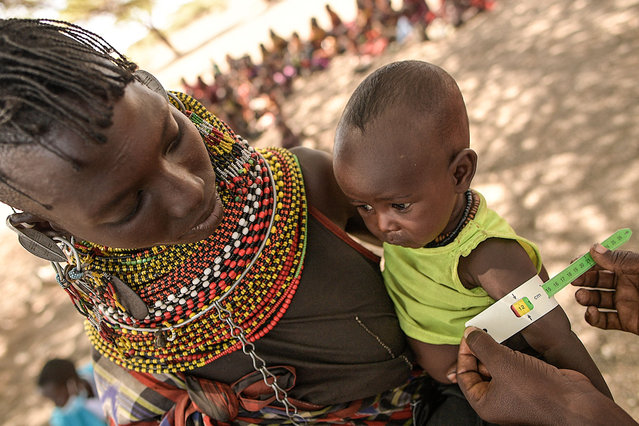 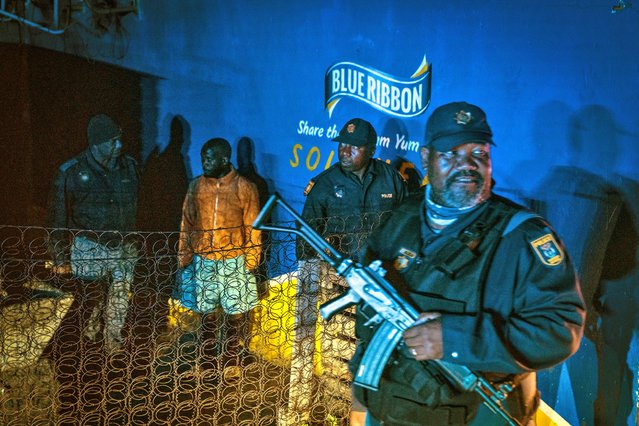 Police patrol an area in Soweto, South Africa Tuesday, July 12, 2022 in search of illegal firearms following the weekend shooting in a bar which claimed 16 people. South African police are searching for illegally-held guns in patrols of Johannesburg's Soweto township, following a spate of bar shootings that have rocked the nation. (Photo by Shiraaz Mohamed/AP Photo) 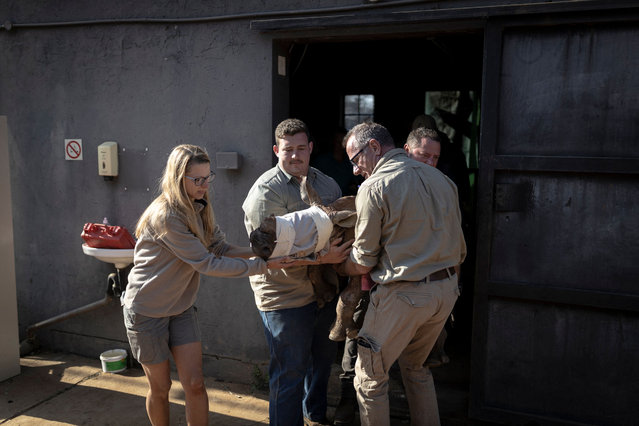 Members of the the The Rhino Orphanage move a young rhino calf for his relocation in an undisclosed location, Limpopo province, on July 14, 2022. It took Pierre Bester, a veterinarian at The Rhino Orphanage, and his team six weeks of painstaking work to move more than 30 young rhinos to a new home, where he hopes the animals will be safe from the poachers that killed their parents. (Photo by Guillem Sartorio/AFP Photo) 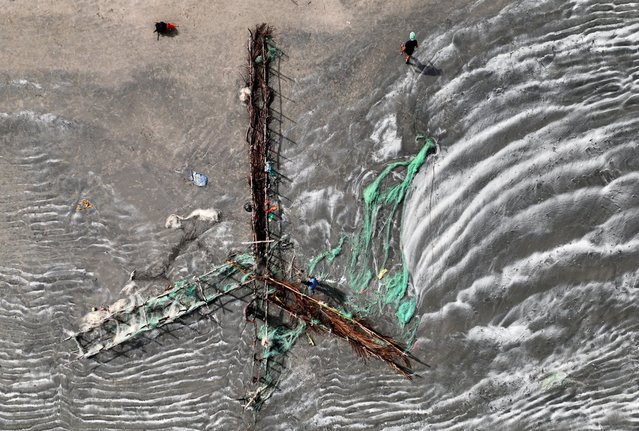 An aerial view shows volunteers, Gilbert Bassene, 37, a primary school teacher, and Patrick Chevalier, 69, a retired economist working on the wooden Gryones using the Maltais-Savard Ears System to hold back sediments and counter the erosion of the shoreline during low tide in Diogue island, Senegal on July 14, 2022. (Photo by Zohra Bensemra/Reuters) 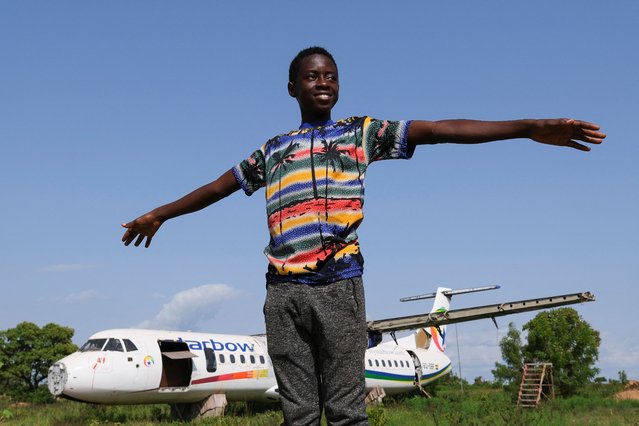 Abdul-Latif Zakaria, 16, a student and studio volunteer, poses for a photograph as he spends his day at the studio of Ghanaian artist Ibrahim Mahama, 35, in Tamale, Ghana on July 15, 2022. (Photo by Francis Kokoroko/Reuters) 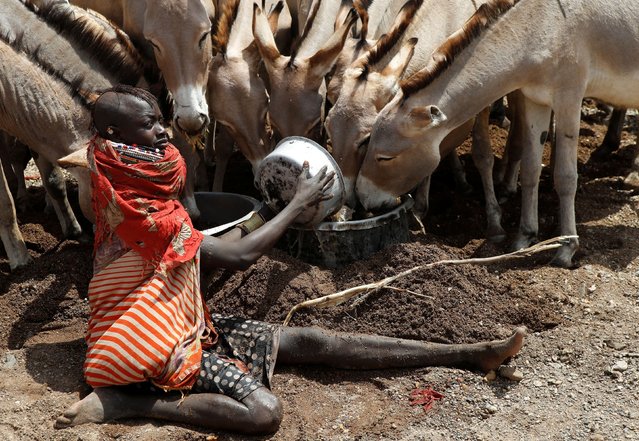 A Turkana tribe woman gives water to her donkeys at the Nasurukeny watering point near Lorengo village of Turkana North in Turkana county Kenya on July 19 2022. (Photo by Monicah Mwangi/Reuters) 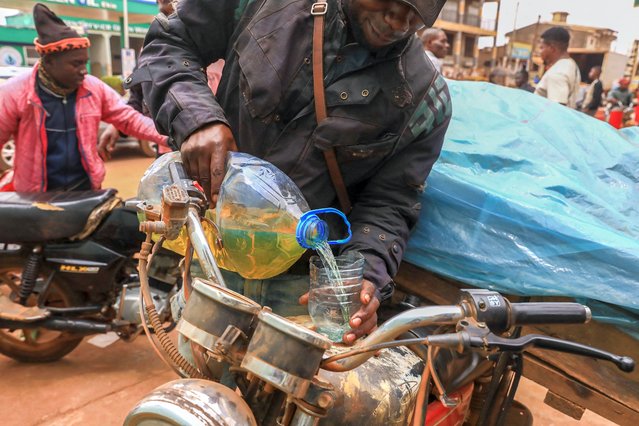 A man pours fuel into his motorcycle near a fuel station in Yaounde, on July 19, 2022. For almost two weeks now, gasoline and diesel have been in short supply in the main cities of Cameroon. (Photo by Daniel Beloumou Olomo/AFP Photo) 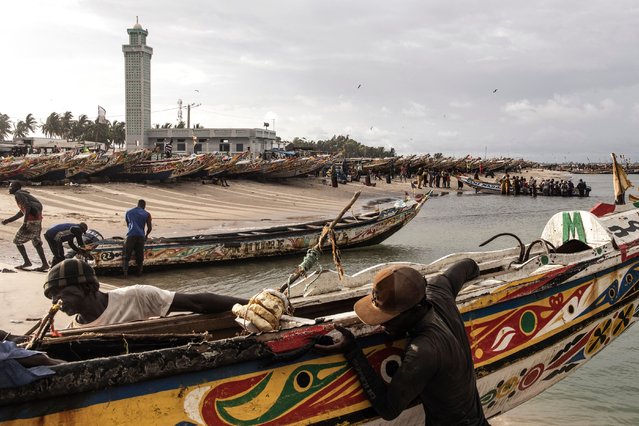 Fishermen land their pirogues after a days fishing in Djiffer, Senegal on July 19, 2022. (Photo by John Wessels/AFP Photo) 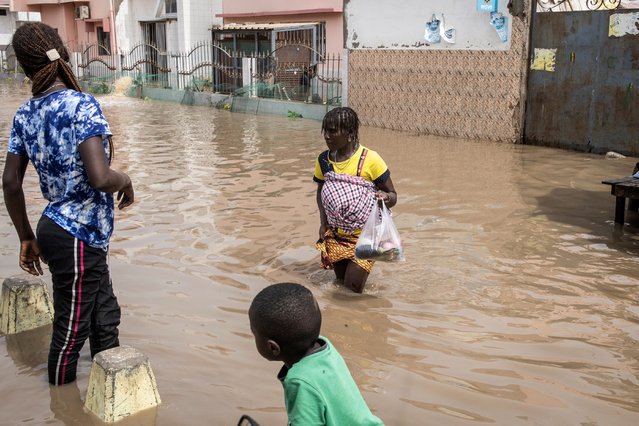 A woman walks with her shopping through a flooded street after Dakars first major rains of the season on July 20, 2022. (Photo by John Wessels/AFP Photo) 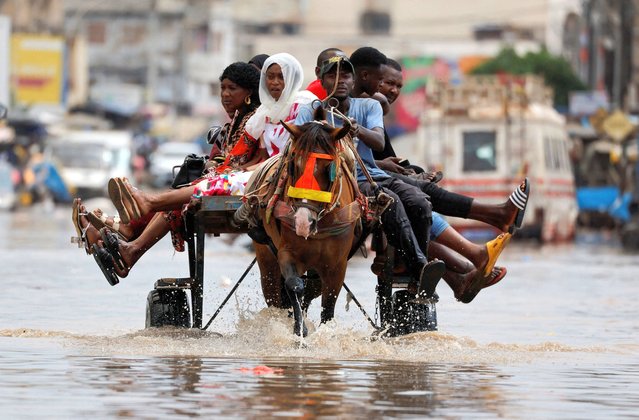 Residents make their way through a flooded street after heavy rains in Yoff, district of Dakar, Senegal on July 20, 2022. (Photo by Zohra Bensemra/Reuters) 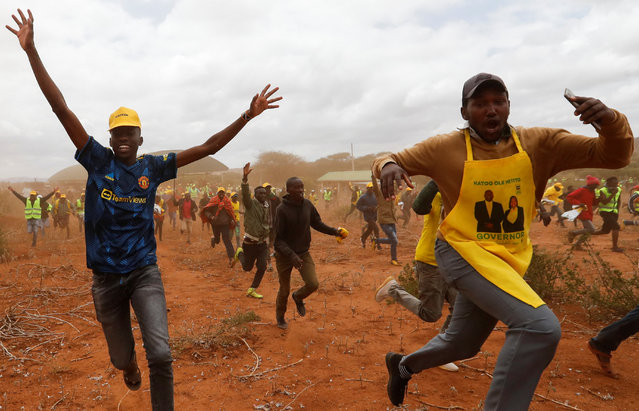 Supporters of Kenya's Deputy President William Ruto of United Democratic Alliance (UDA) and Kenya Kwanza political coalition run to receive him during a campaign tour ahead of the forthcoming presidential elections, near the border crossing point between Kenya and Tanzania in Namanga, Kenya on July 23, 2022. (Photo by Thomas Mukoya/Reuters) 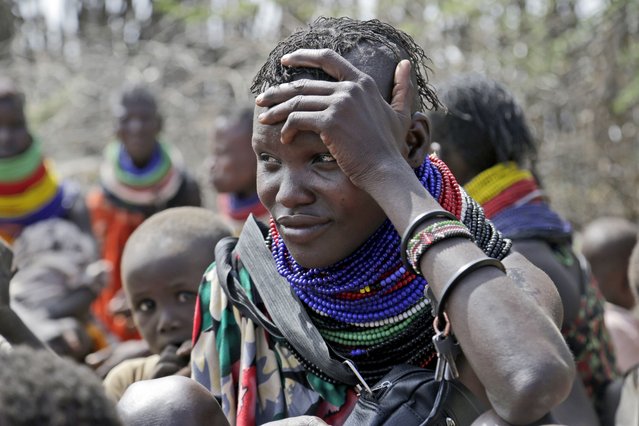 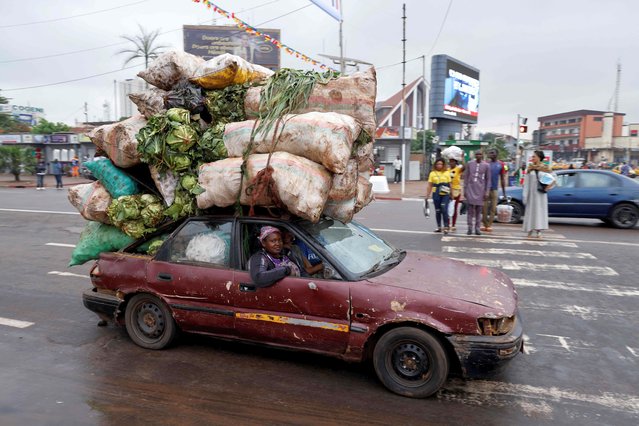 A motorist drives a car overloaded with vegetables and fruit on a street in Yaounde on July 25, 2022, prior to the French president's visit. (Photo by Ludovic Marin/AFP Photo) 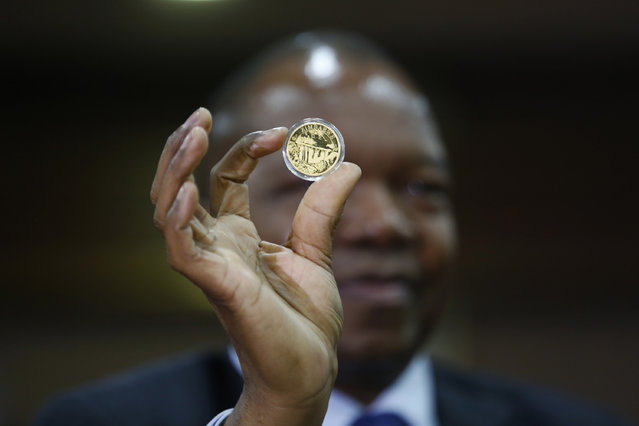