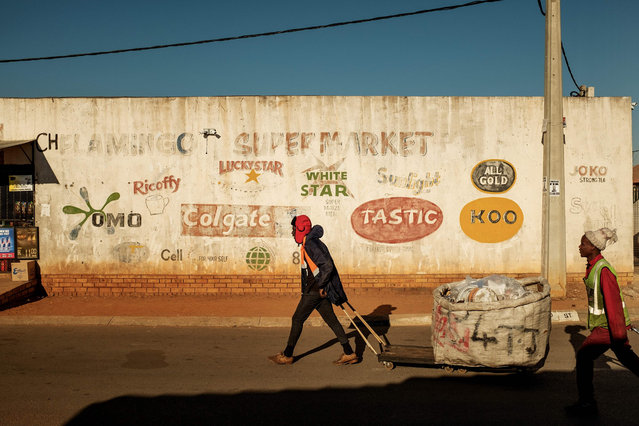 Scelo Sithole, 38, and Tumelo Ikaneng, 21, carry their trolleys filled with waste collected from trash bins in Johannesburg, South Africa, in the early morning of June 12, 2019. A report commissioned by the Department of Environmental Affairs estimated that there are 62,147 informal recyclers in South Africa, of whom about 25,467 operate at curb-side as trolley-pushers, with the remainder operating at landfill sites. Their contribute saves municipalities in the country up to R750-million in landfill airspace each year, according to research by the Council for Scientific and Industrial Research (CSIR). (Photo by Michele Spatari/AFP Photo) 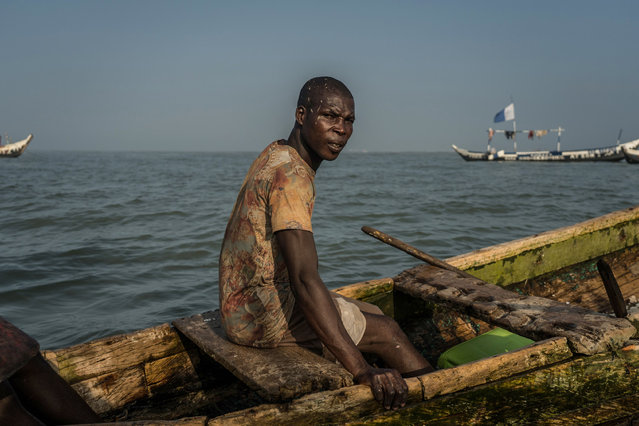 Eric Quaye Ade, a Ghanaian fisherman in the waters of the Gulf of Guinea where he has been working for almost twenty years, outside Jamestown, the oldest fishing community in Accra on July 21, 2019. Due to illegal fishing trawlers, unsustainable fishing practices like the use of dynamite, fish stock is depleting in the Gulf of Guinea, raising huge concerns for the local fishing communities whose livelihood depends on their work at sea. (Photo by Natalija Gormalova/AFP Photo) 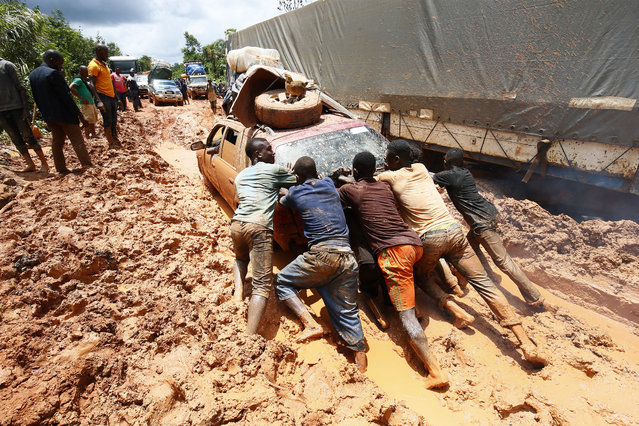 Men push a car stucking in the mud on a motorway in Nimba County, Liberia, 28 July 2019. Most highway roads in the rural parts of the country are unpaved. The government of President George Weah has promised to build roads to connect all big cites of Liberia. (Photo by Ahmed Jallanzo/EPA/EFE) 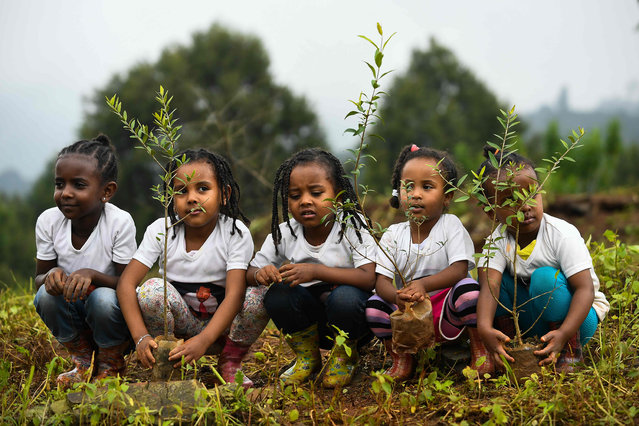 Young ethiopian girls take part in a national tree-planting drive in the capital Addis Ababa, on July 28, 2019. Ethiopia plans to plant a mind-boggling four billion trees by October 2019, as part of a global movement to restore forests to help fight climate change and protect resources. The country says it has planted nearly three billion trees already since May. (Photo by Michael Tewelde/AFP Photo) 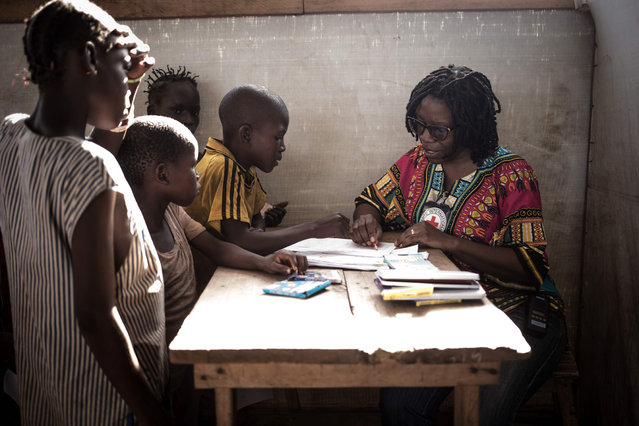 Children at the Lazare camp for internally displaced people (IDP) explain their drawings to the psychologist in Kaga Bandoro, Central African Republic on May 23, 2019. In the northern part of the country devastated by the crisis, the International Red Cross has set up a workshop to detect and treat Post Traumatic Stress Disorder through drawing. (Photo by Florent Vergnes/AFP Photo) 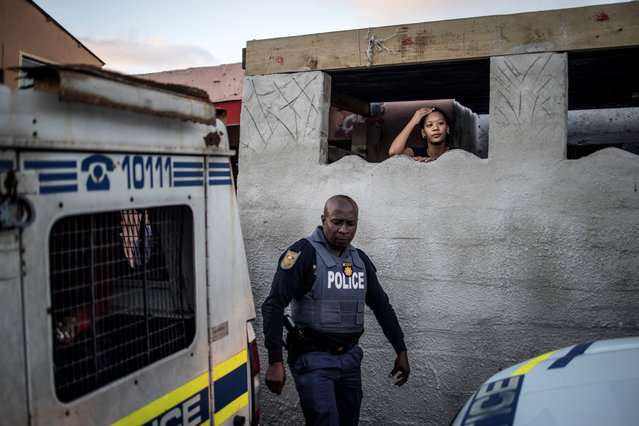 The relative of a man detained in a police van looks on as South African policeman leaves their residence during a joint police operation in the Mitchel's Plan district of the Cape Flat in Cape Town, on August 9, 2019. A total of 1320 South Africa National Defence Forces service members have been deployed to Cape Town's gang-ridden areas to support police operations to prevent and combat crime. (Photo by Marco Longari/AFP Photo) 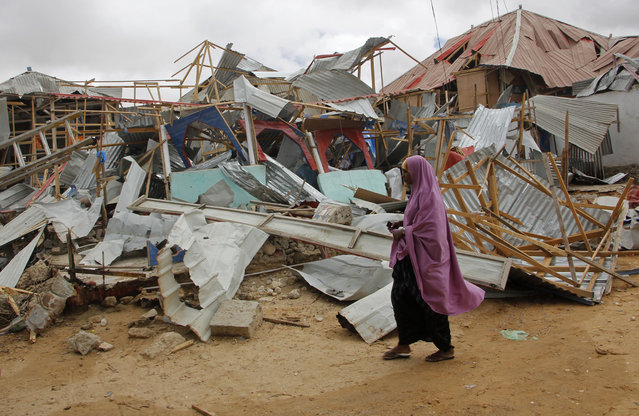 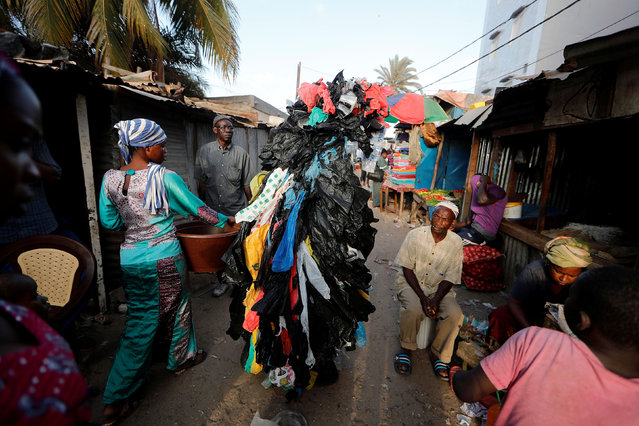 Modou Fall, 43, head of Senegal Propre (“Clean Senegal”) Association who is covered with plastic cups and bags to raise awareness of the damage on the environment caused by plastic waste talks to residents in a market on the outskirts of Dakar, Senegal on July 26, 2019. (Photo by Zohra Bensemra/Reuters) 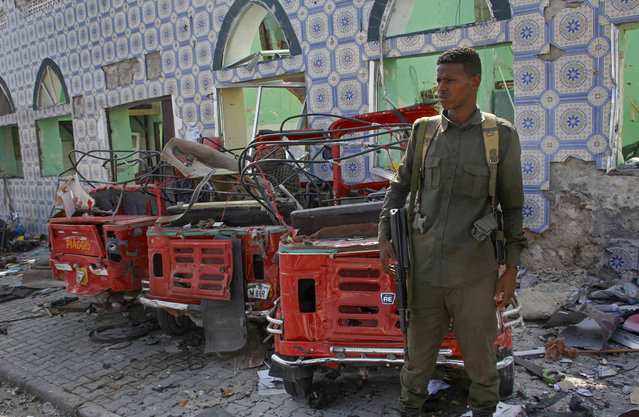 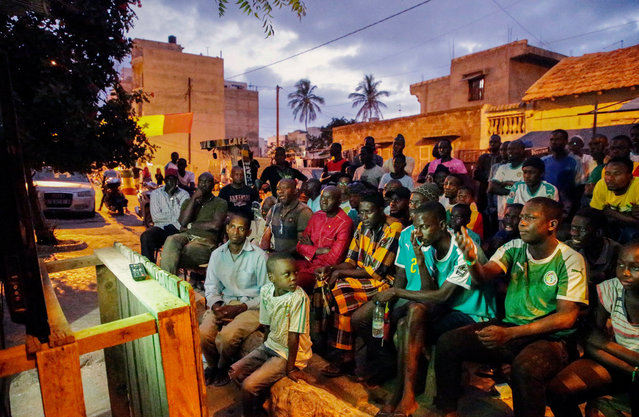 Senegalese supporters watch the 2019 Africa Cup of Nations (AFCON) final on a television in a street in Medina, Dakar, Senegal, 19 July 2019. (Photo by Aliou Mbaye/EPA/EFE) 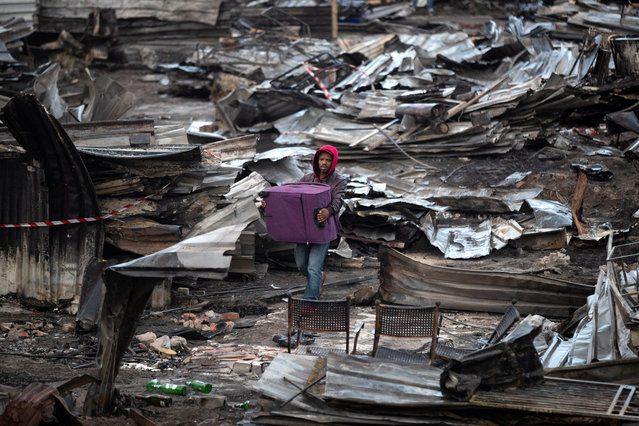 A resident of Masiphumelele informal settlement walks with his salvaged belongings through burned shacks after a fire destroyed over 250 structures in Masiphumelele, Cape Town, South Africa, 29 July 2019. One person died and over a thousand people were left homeless after a fire swept through Masiphumelele’s wetland informal settlement in E-Section in the early hours of 29 July 2019. According to residents the fire was caused by a candle in one of the shacks. The high density living conditions and strong winds caused the fire to spread rapidly. Disaster Risk Management is assisting survivors with food, shelter and help with arranging new documents destroyed in the fire. Many displaced residents have sought shelter in the community hall with freezing temperatures expected as another cold front sweeps over the cape. (Photo by Nic Bothma/EPA/EFE) 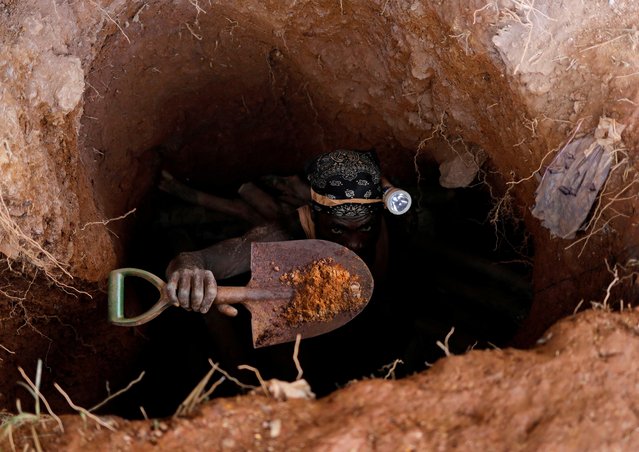 An informal gold miner carries a shovel as he climbs out from inside a gold mining pit at the site of Nsuaem-Top, Ghana on November 24, 2018. (Photo by Zohra Bensemra/Reuters) 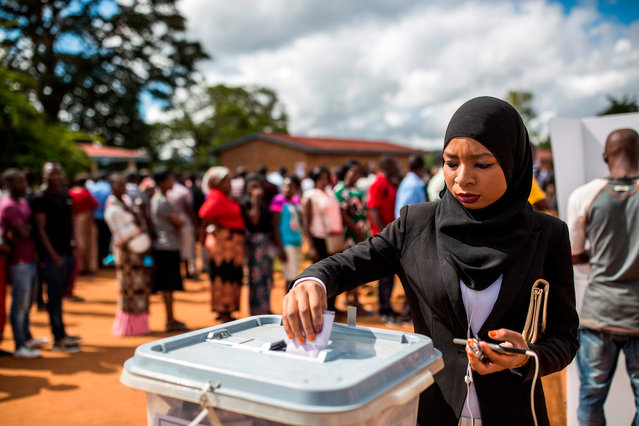 A woman casts her vote at CCAP Primary School polling station in Mzuzu, Malawi during general elections on May 21, 2019. Malawi polls opened on May 21 after a closely-fought election campaign, with President Peter Mutharika battling to hold off two serious rivals in a race that has focused on corruption allegations and economic development. (Photo by Patrick Meinhardt/AFP Photo) 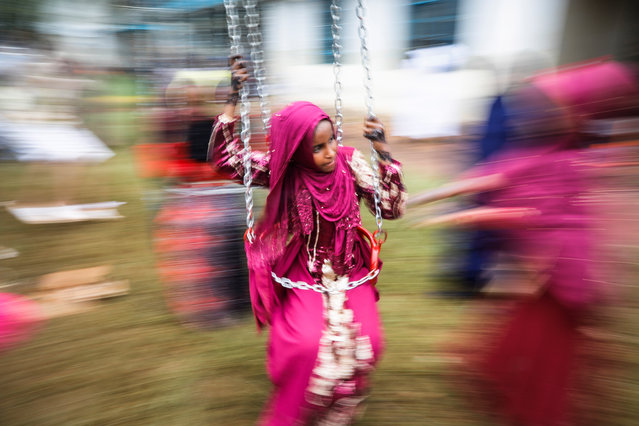 A young Muslim girl enjoys a swing ride at Eastleigh High School in Nairobi, Kenya, 04 June 2019. Muslims around the world are celebrating Eid al-Fitr, the three day festival marking the end of the Muslim holy fasting month of Ramadan. Eid al-Fitr is one of the two major holidays in Islam. (Photo by Dai Kurokawa/EPA/EFE) 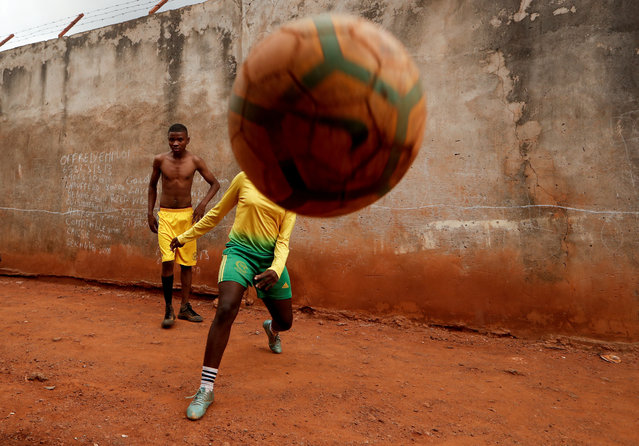 Gaelle Dule Asheri, 17, a soccer player, who is amongst the first wave of girls being trained by professional coaches at the Rails Foot Academy, plays football with her friends outside her house in Yaounde, Cameroon, May 3, 2019. Asheri never gave up her dream despite strong opposition from her mother who feared she would lose her daughter to a “men's game“. “I used to train with boys, so with boys there were some exercises I was not allowed to do because I am a girl”, she said. When she first started playing soccer in the dirt streets near her home, she was the only girl on the informal neighbourhood teams. “I picked up the ball, I kicked it and I never looked back”, Asheri said, recalling the childhood street soccer games with her male cousins and neighbours. (Photo by Zohra Bensemra/Reuters) 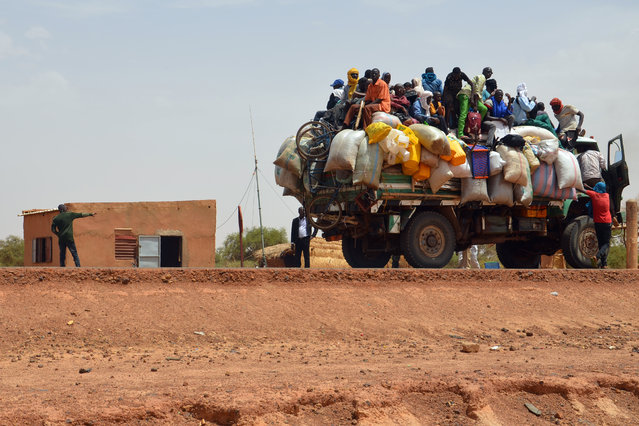 People ride in a loaded truck on June 19, 2019, by the police checkpoint where two policemen were killed and four injured by armed men during an overnight attack on June 18 at the police station at the northern entrance to Niamey, the first to happen at the gates of the capital of Niger, a country beset by recurring jihadist raids. Niger, a large, impoverished state in the heart of the fragile Sahel region, is grappling with attacks by jihadist groups in the west of the country, and raids by Boko Haram Islamists in the south, near the border with Nigeria. (Photo by Boureima Hama/AFP Photo)
Edit Del
13 Aug 2019 00:01:00, post received 0 comments
Publication archive:
←   →
Popular tags:
All tags
Last searches: