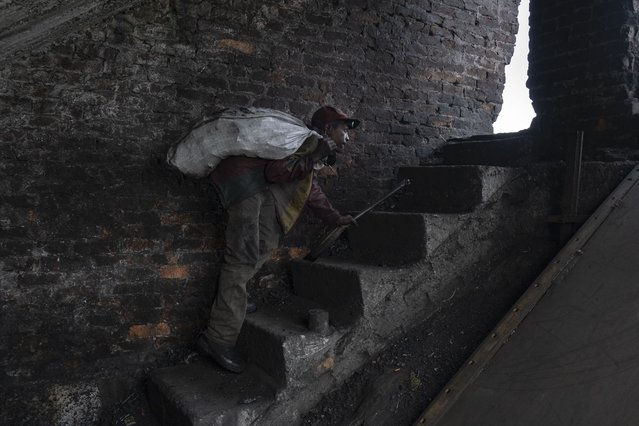 Bonginkosi Mhlanga walks up the stairs out of the abandoned Goldview coal mine lugging a large bag of coal in Ermelo, South Africa, on April 21, 2021. After spending a night underground, breaking off and bagging coal, Bonginkosi carries heavy bags of coal up the stairs and out of the mine. Bonginkosi amongst other men scrape a living by chipping away at abandoned mine shafts previously exploited by mining conglomerates. (Photo by Emmanuel Croset/AFP Photo) 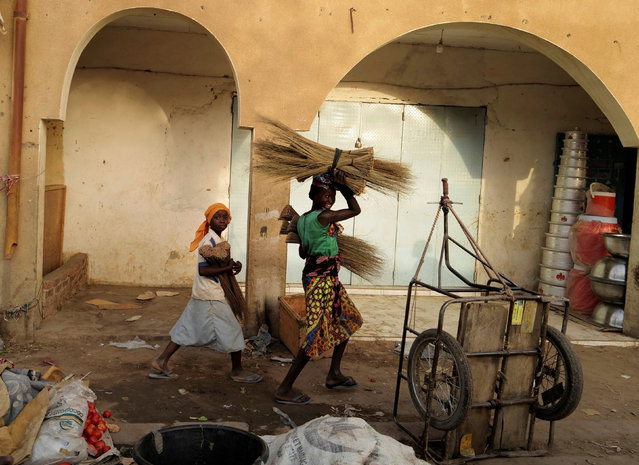 Street vendor girls carry brooms for sale at the market in N'djamena, Chad on April 26, 2021. (Photo by Zohra Bensemra/Reuters) 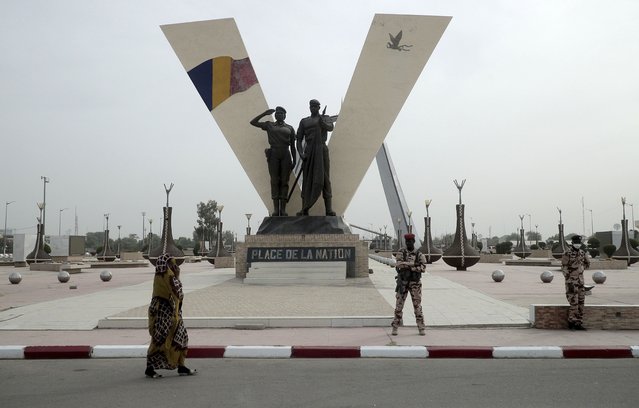 Chadian soldiers stand guard on Place de la Nation square ahead of the state funeral for the late Chadian president Idriss Deby in N'Djamena on April 23, 2021. Chad will bury veteran ruler Idriss Deby Itno on Aprul 23, 2021, as concerns mount over the loss of a lynchpin in the fight against jihadism in the Sahel and uncertainty over the country's democratic future. (Photo by Christophe Petit Tesson/Pool via AP Photo) 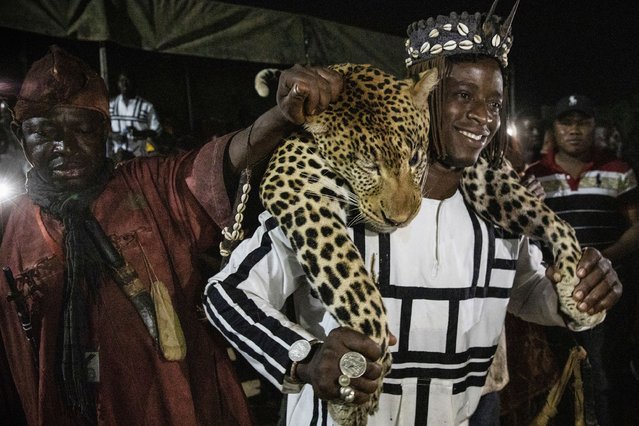 Members of the Association of Dozos of Dafra carry the body of a leopard during a celebration of their culture in Bobo-Dioulasso, Burkina Faso, 360 kilometers (220 miles) west of the capital, Ouagadougou, on Sunday, March 28, 2021. “Before someone faces a challenge, they know there are supernatural powers and spirits they can call upon in any situation”, said Jean Celestin Ky, professor of history at Joseph Ki-Zerbo University in Ouagadougou. (Photo by Sophie Garcia/AP Photo) 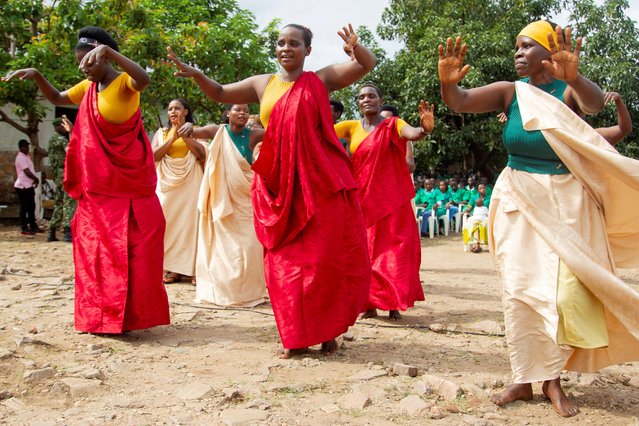 Prisoners dance during the launch of a mass presidential pardon of over 5000 inmates at the Mpimba Central Prison, as part of efforts to decongest prisons, in Bujumbura, Burundi on April 26, 2021. (Photo by Evrard Ngendakumana/Reuters) 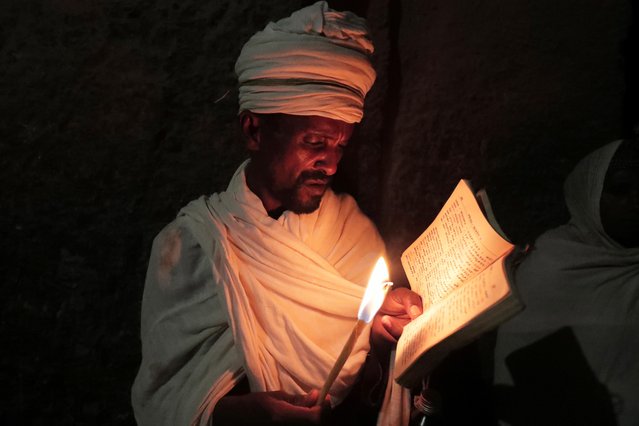 An Ethiopian Orthodox Priest reads a Bible during the Easter Eve celebration at the St. Mary Rock-Hewn church in Lalibela, Ethiopia, May 1, 2021. (Photo by Tiksa Negeri/Reuters) 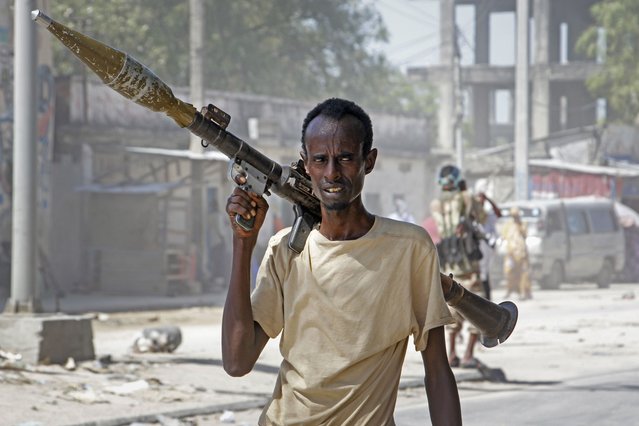 A soldier supporting anti-government opposition groups carries a rocket-propelled grenade launcher on a street in the Fagah area of Mogadishu, Somalia Sunday, April 25, 2021. Gunfire was exchanged Sunday between government forces loyal to President Mohamed Abdullahi Mohamed, who signed into law on April 14 a two year extension of his mandate and that of his government, and other sections of the military opposed to the move and sympathetic to former presidents Hassan Sheikh Mohamud and Sharif Sheikh Ahmed. (Photo by Farah Abdi Warsameh/AP Photo) 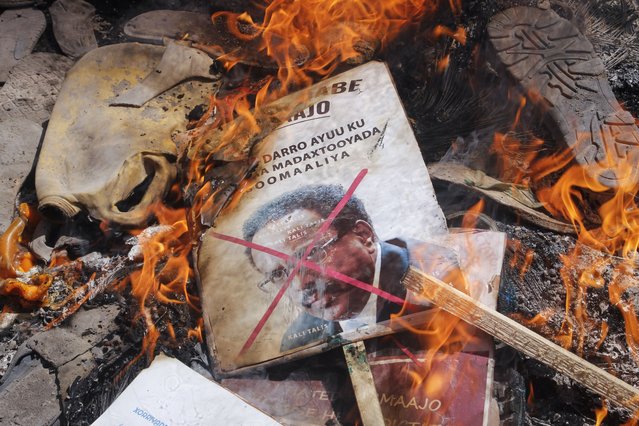 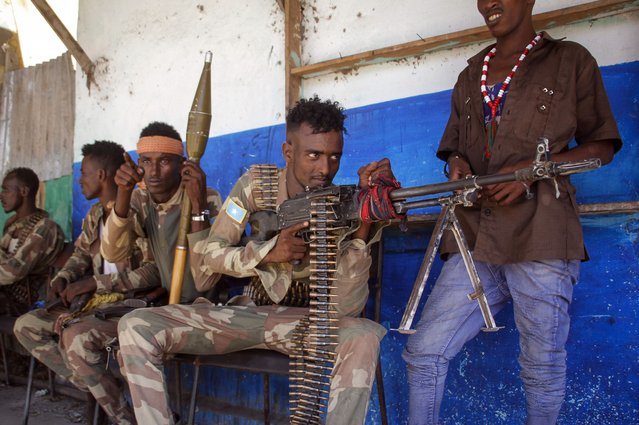 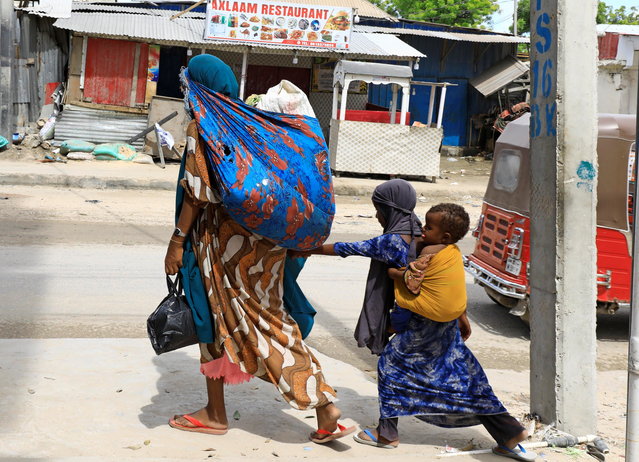 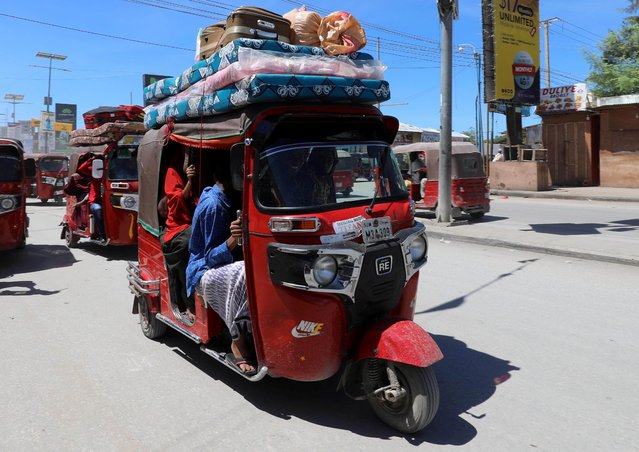 Residents ride in rickshaws as they flee following renewed clashes between rival factions in the security forces, who have split in a dispute over an extension to the president's term in Hodan district of Mogadishu, Somalia on April 27, 2021. (Photo by Feisal Omar/Reuters) 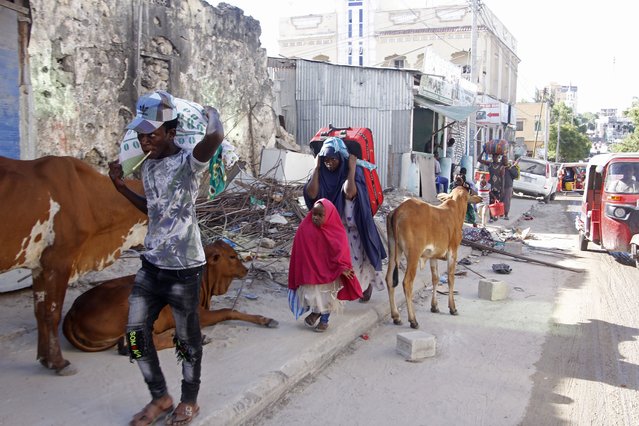 Civilians flee following gunfire between factions within Somalia's security forces near KM4 in Hodan district of Mogadishu, Somalia, Monday April 27, 2021. Soldiers angry over the president’s extended stay in power have taken up key positions across Somalia’s tense capital on Monday, but there is none of the gunfire that shattered the previous night in Mogadishu. (Photo by Farah Abdi Warsameh/AP Photo) 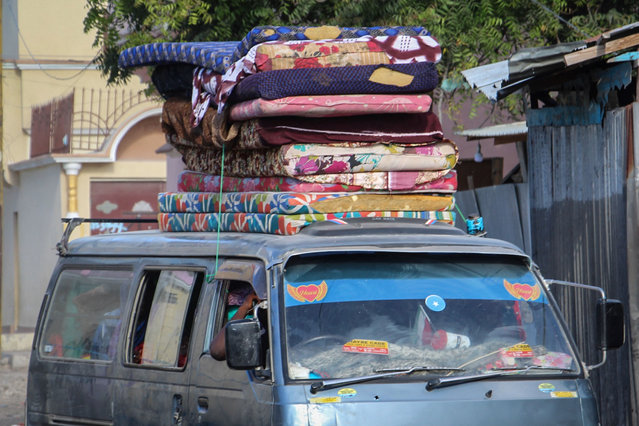 Residents start to flee from their home after recent crashes between the Somali security forces and the Somali military force supporting anti-government opposition leaders erupted over the president's bid to extend his mandate in Mogadishu, Somalia, on April 27, 2021. The political clashes in the streets of Mogadishu mark a dangerous new phase in a dispute triggered by the failure to hold February's planned elections. President Mohamed Abdullahi Mohamed, best known by his nickname Farmajo, earlier this month signed a law approved by parliament that extended his mandate by two years. (Photo by AFP Photo/Stringer) 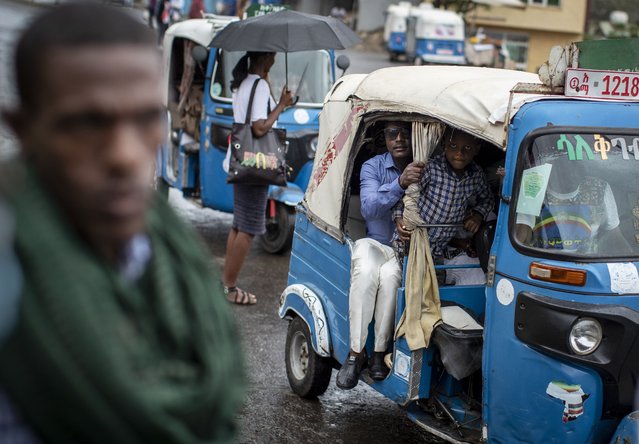 Passengers look out from an auto-rickshaw, known locally as a “bajaj”, in Gondar, in the Amhara region of Ethiopia Sunday, May 2, 2021. (Photo by Ben Curtis/AP Photo) 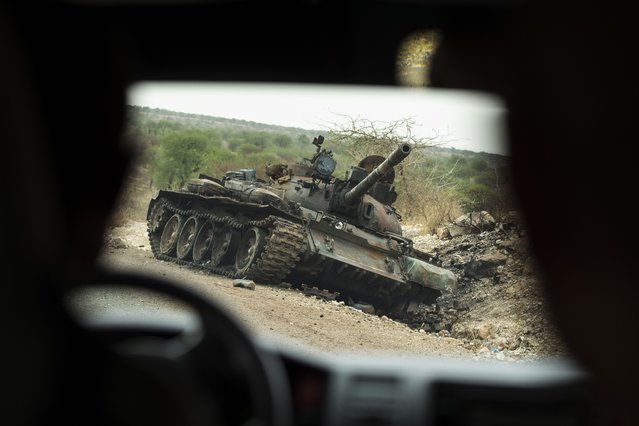 A destroyed tank is seen by the side of the road south of Humera, in an area of western Tigray annexed by the Amhara region during the ongoing conflict, in Ethiopia, Saturday, May 1, 2021. Ethiopia faces a growing crisis of ethnic nationalism that some fear could tear Africa's second most populous country apart, six months after the government launched a military operation in the Tigray region to capture its fugitive leaders. (Photo by Ben Curtis/AP Photo) 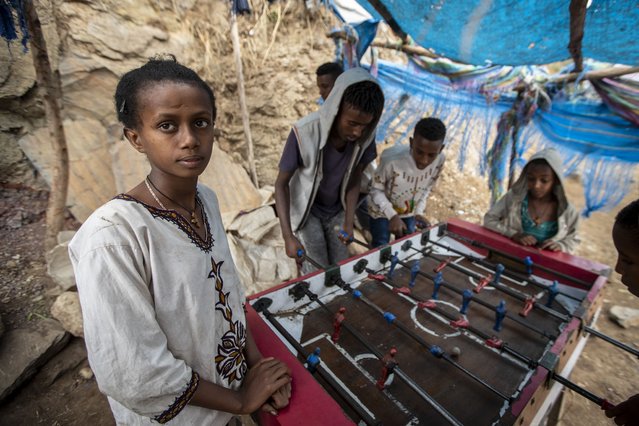 A girl watches while boys and young men play table football on the street, as Ethiopian Orthodox Christians celebrate Easter Sunday, in Gondar, in the Amhara region of Ethiopia Sunday, May 2, 2021. (Photo by Ben Curtis/AP Photo) 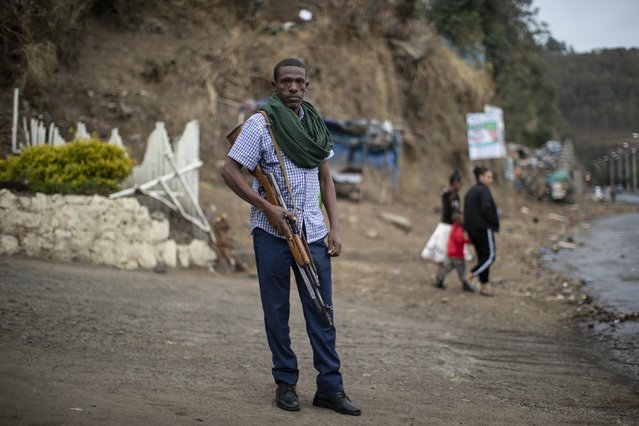 Amhara militia member Nega Wagaw poses for a photograph on a street in Gondar, in the Amhara region of Ethiopia Sunday, May 2, 2021. (Photo by Ben Curtis/AP Photo) 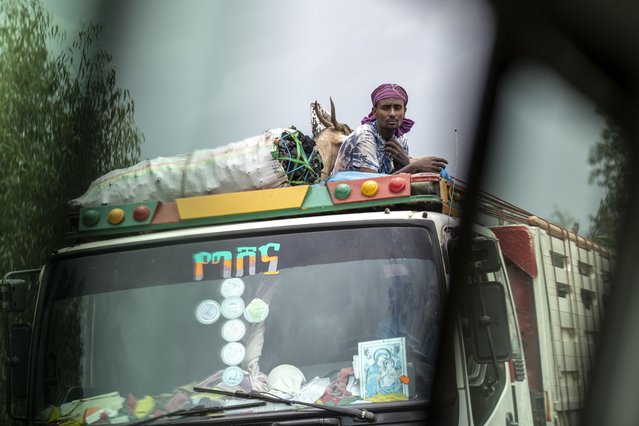 A man rides with goats and charcoal on the roof of a truck, seen through the window of a vehicle, near Danshe, a town in an area of western Tigray annexed by the Amhara region during the ongoing conflict, in Ethiopia Saturday, May 1, 2021. (Photo by Ben Curtis/AP Photo) 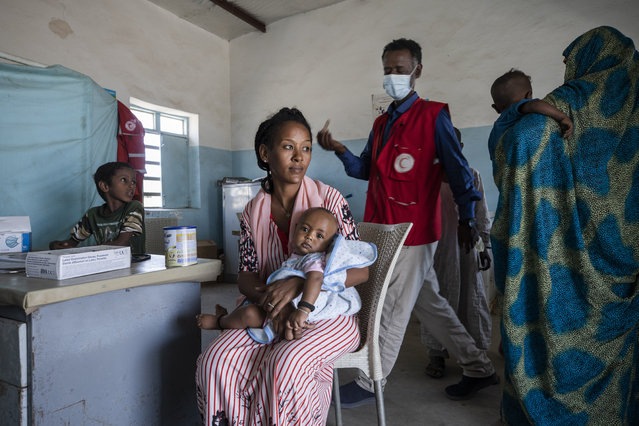 Surgeon and doctor-turned-refugee, Dr. Tewodros Tefera, prepares to preform a medical checkup on an infant, inside the Sudanese Red Crescent clinic in Hamdayet, eastern Sudan, near the border with Ethiopia, on March 22, 2021. (Photo by Nariman El-Mofty/AP Photo) 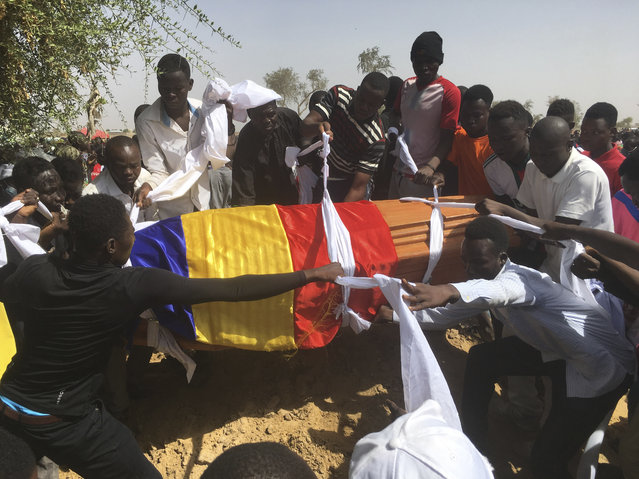 Mourners lower the coffin of one of the victims of protest who was killed this week during his funeral at a cemetery in N'Djamena, Chad, Saturday, May 1, 2021. Hundreds of chanting mourners carrying Chadian flags gathered Saturday to bury victims who were shot dead earlier this week amid demonstrations against the country's new military government. (Photo by Sunday Alamba/AP Photo)
Edit Del
14 May 2021 09:49:00, post received 0 comments
Publication archive:
←   →
Popular tags:
All tags
Last searches: