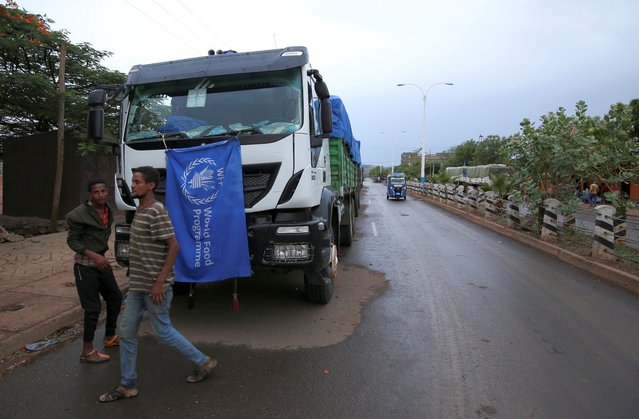 The World Food Program (WFP) convoy trucks carrying food items for the victims of Tigray war are seen parked after the checkpoints leading to Tigray Region were closed, in Mai Tsebri town, Ethiopia on June 26, 2021. (Photo by Reuters/Stringer) 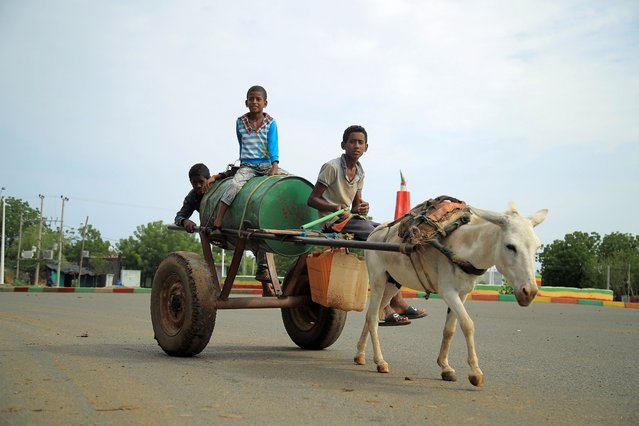 Civilians ride a cart along a street in Humera town, Ethiopia on July 1, 2021. (Photo by Reuters/Stringer) 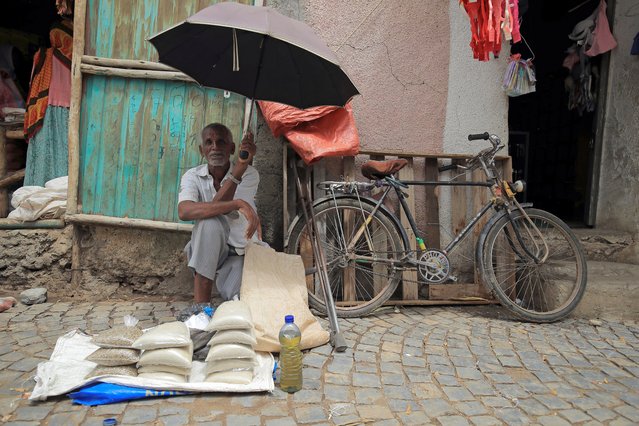 A vendor waits for his customers in a local market of Humera town in Ethiopia on July 1, 2021. (Photo by Reuters/Stringer) 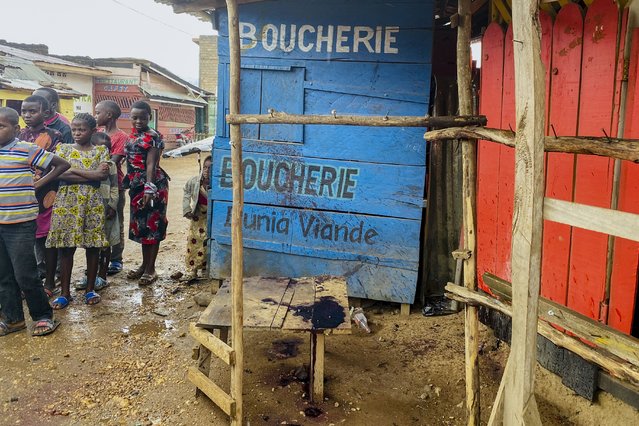 Residents observe blood at the scene where a suicide bomber on Sunday night detonated his explosives at a busy intersection, in Beni, Congo Monday, June 28, 2021. The blast occurred the same day another explosion rocked a Catholic church, authorities said, and while neither bomb killed any civilians the government closed major gathering spaces for two days and restricted public meetings as a precaution against further explosions. (Photo by Al-hadji Kudra Maliro/AP Photo) 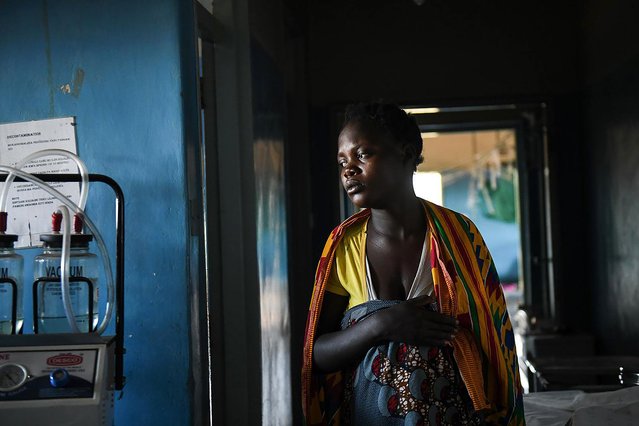 A woman in labour, walks to her delivery bed at Malawi Government's Mauwa Health Centre labour ward in Chiradzulu, southern Malawi, Sunday, May 23, 2021. Health officials in Malawi say fewer women are getting prenatal care amid the COVID-19 pandemic. At risk are the developing country's gains on its poor rate of maternal deaths. (Photo by Thoko Chikondi/AP Photo) 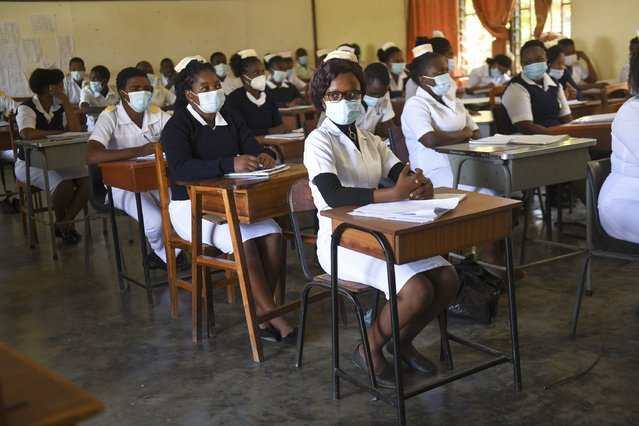 Nursing and midwifery students sit in class at St Joseph College of Nursing and Midwifery in Chiradzulu southern Malawi on Friday May 28, 2021. (Photo by Thoko Chikondi/AP Photo) 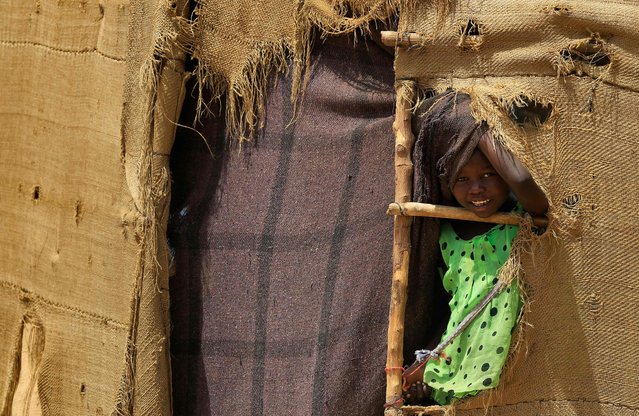 A South Sudanese refugee living at Sudan's al-Takamol camp, on the outskirts of the capital Khartoum, smiles and she peeps from inside her tent, on July 5, 2021. South Sudan split from the north on the back of a 2005 peace deal under now-ousted Sudanese president Omar al-Bashir, whose rule was marred by multiple internal conflicts and civil war. His government sought to repatriate tens of thousands of South Sudanese after the separation. But repatriations were put on hold after South Sudan descended into political crisis in December 2013. (Photo by Ashraf Shazly/AFP Photo) 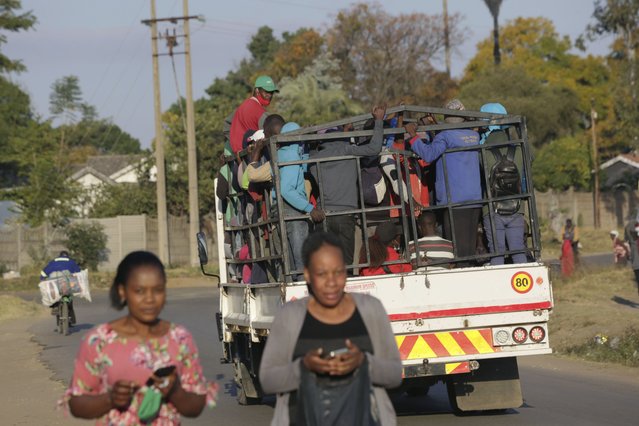 A truck loaded with people travels on a street, in Harare, Tuesday, July, 6, 2021. Zimbabwe has reactivated strict lockdown measures it once imposed when COVID-19 first hit the country last year, as the country battles a resurgence of the virus amid vaccine shortages. (Photo by Tsvangirayi Mukwazhi/AP Photo) 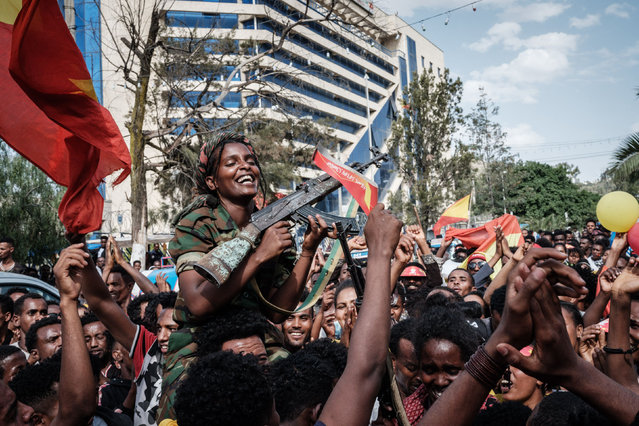 Female soldiers of Tigray Defence Force (TDF) celebrate while they sit on men's shoulders as people celebrate their return on a street in Mekele, the capital of Tigray region, Ethiopia, on June 29, 2021. Rebel fighters in Ethiopia's war-hit Tigray seized control of more territory on June 29, 2021, one day after retaking the local capital and vowing to drive all “enemies” out of the region. (Photo by Yasuyoshi Chiba/AFP Photo) 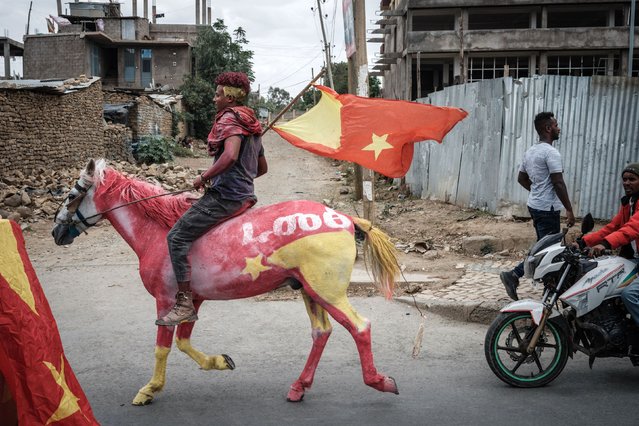 A man rides on a horse painted in the colour of the Tigray flag to celebrate the return of soldiers of Tigray Defence Force (TDF) in Mekele, the capital of Tigray region, Ethiopia, on June 29, 2021. (Photo by Yasuyoshi Chiba/AFP Photo) 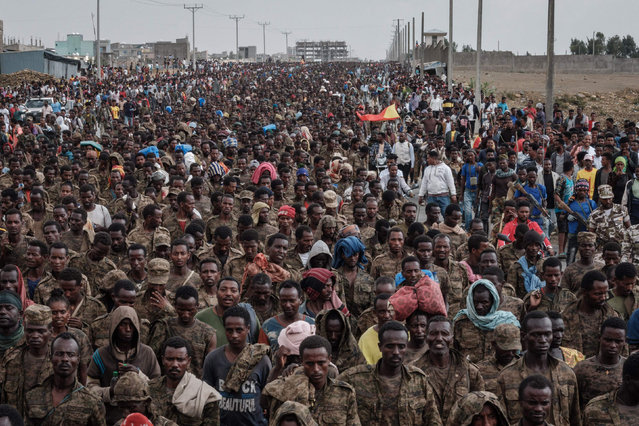 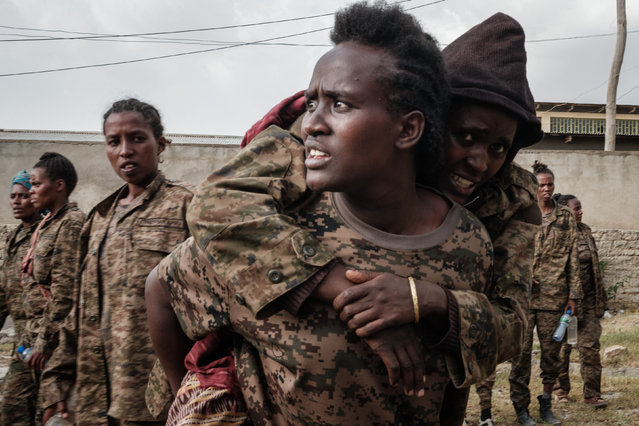 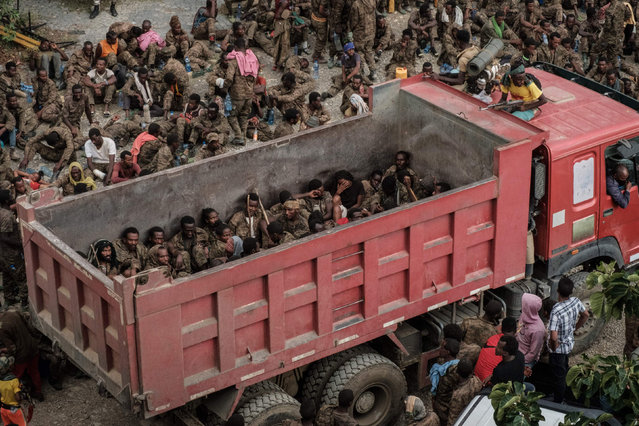 Wounded captive Ethiopian soldiers arrive on a truck at the Mekele Rehabilitation Center in Mekele, the capital of Tigray region, Ethiopia, on July 2, 2021. (Photo by Yasuyoshi Chiba/AFP Photo) 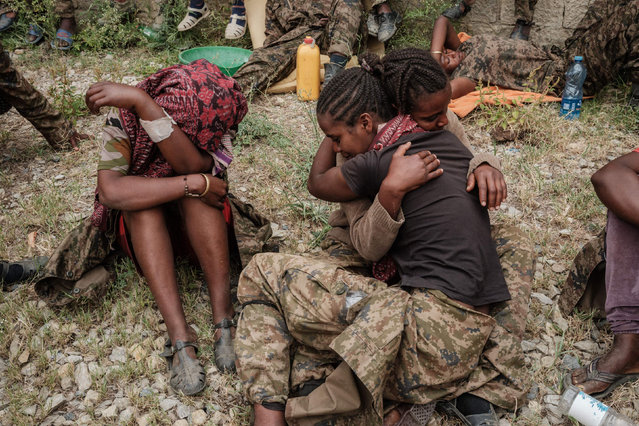 Captive Ethiopian female soldiers console each other upan their arrival to the Mekele Rehabilitation Center in Mekele, the capital of Tigray region, Ethiopia, on July 2, 2021. (Photo by Yasuyoshi Chiba/AFP Photo) 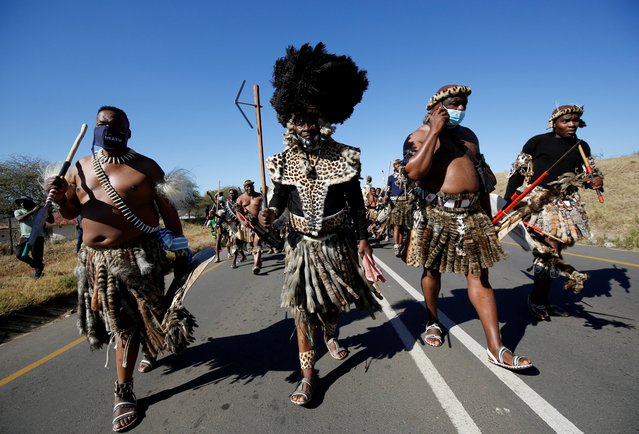 Supporters of former South African president Jacob Zuma, who was sentenced to a 15-month imprisonment by the Constitutional Court, walk to his home in Nkandla, South Africa, July 3, 2021. (Photo by Rogan Ward/Reuters) 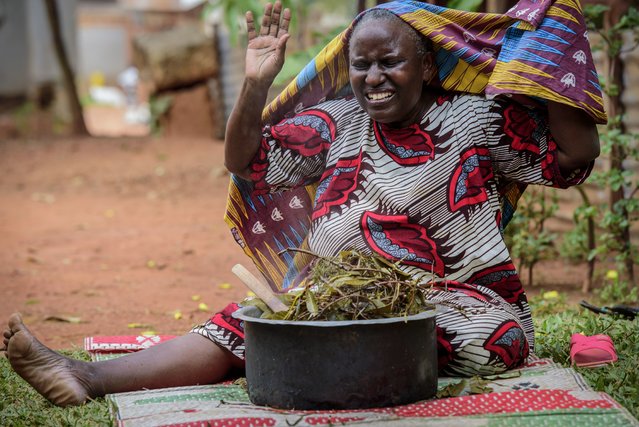 A woman reacts after covering herself to inhale steam from an infusion made from local herbs believed by her to prevent and treat the symptoms of COVID-19, in Kampala, Uganda on Tuesday, July 6, 2021. Some hospitals with COVID-19 wards are charging prohibitive sums for most Ugandans and many are now self-medicating within their homes, experimenting with everything from traditional medicine to a newly approved herbal remedy selling briskly as COVIDEX. (Photo by Nicholas Bamulanzeki/AP Photo) 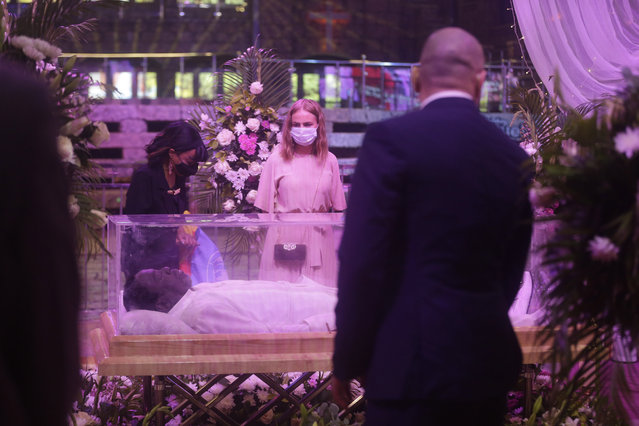 Mourners pay their last respects to Televangelist Temitope Balogun Joshua, during a Lying in state service at in Lagos, Nigeria, Thursday July 8, 2021. Thousands of Nigerians paid their last respects to Temitope Balogun Joshua, one of Africa’s most popular televangelists, known as T.B. Joshua. The controversial Nigerian-born pastor died about a month ago at the age of 57. A memorial service was held for him Thursday at the auditorium of the Lagos headquarters of the megachurch he founded, Synagogue Church Of All Nations. (Photo by Sunday Alamba/AP Photos) 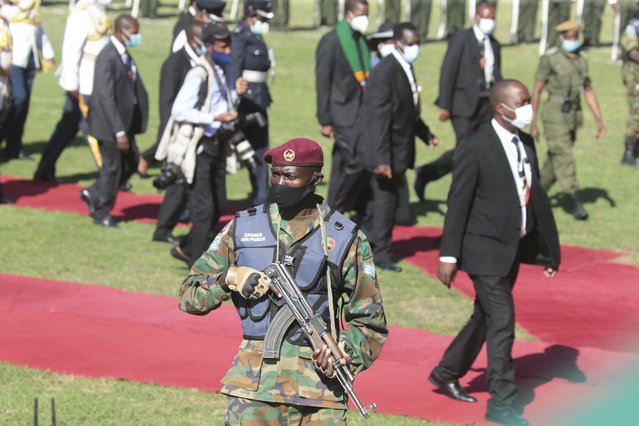 A member of the Zambian Army takes up his position at the State Funeral Service of Dr Kenneth Kaunda, Founding President of the Republic of Zambia at showgrounds in Lusaka, Zambia, Friday, July, 2, 2021. Kaunda who ruled the country for 27 years died on Thursday, 17 June 2021, at the age of 97. (Photo by Tsvangirayi Mukwazhi/AP Photo) 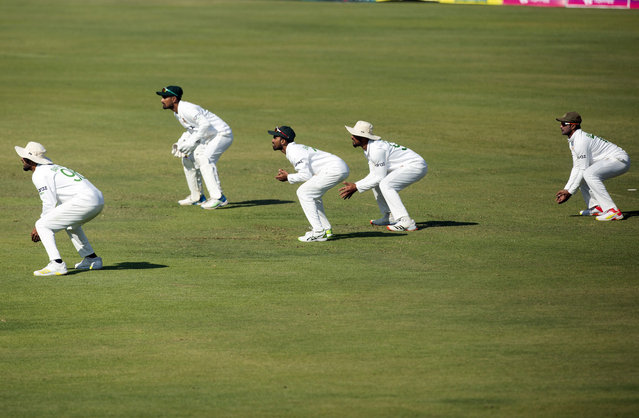