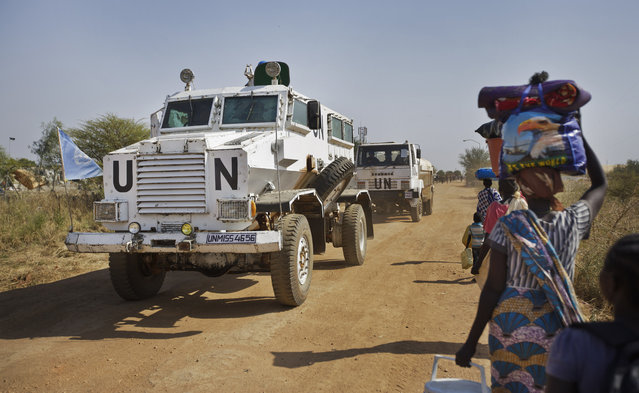 In this Monday, December 30, 2013 file photo, a United Nations armored vehicle passes displaced people walking towards the U.N. Protection of Civilians camp in Malakal, South Sudan. The United Nations peacekeeping mission in South Sudan said on Friday, Sept. 4, 2020 that it has begun withdrawing its troops and police from the protection of civilians camps that continue to shelter more than 180,000 people two years after the end of the country's civil war. (Photo by Ben Curtis/AP Photo/File) 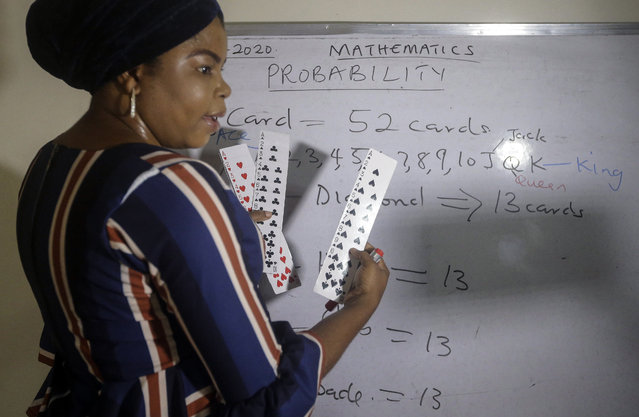 Mathematics teacher Basirat Olamide Ajayi, 36, teaches probability theory with the aid of playing cards, online via her mobile phone from her house in Lagos, Nigeria Saturday, August 15, 2020. The teacher from a Lagos public school is helping students across the country, and internationally, learn math virtually during coronavirus restrictions that have prevented most children from returning to class in Nigeria. (Photo by Sunday Alamba/AP Photo) 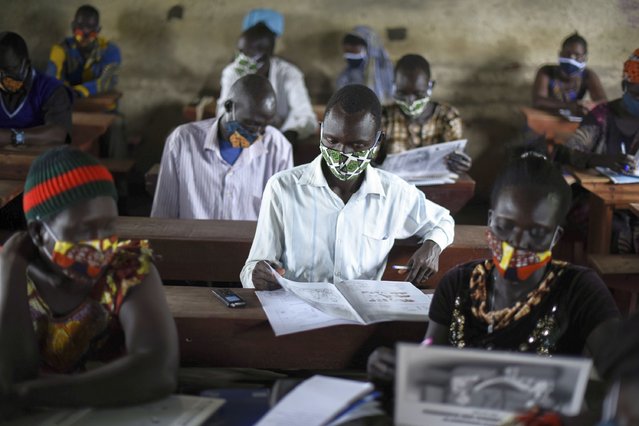 A trainee reads a handbook on coronavirus prevention, at a training session for community health workers conducted by the national NGO “Health Link” in Gumbo, on the outskirts of Juba, South Sudan, Tuesday, August 18, 2020. The coronavirus is exposing an uncomfortable inequality in the billion-dollar system that delivers life-saving aid to countries in crisis: Most money goes to international aid groups instead of local ones and now many local aid workers have been left exposed on the pandemic's front lines. (Photo by Charles Atiki Lomodong/AP Photo) 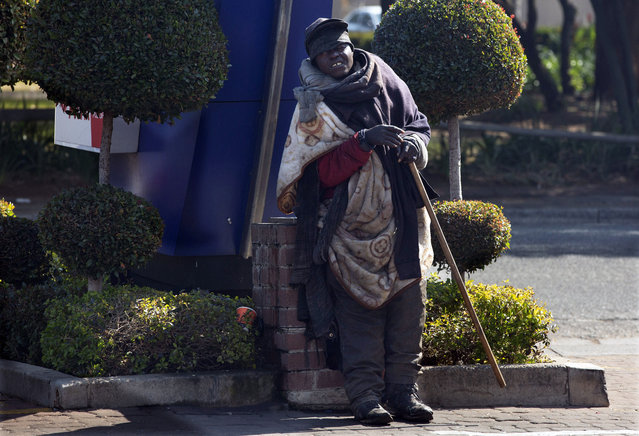 A homeless man stands at a street corner in Johannesburg, Wednesday July 22, 2020. Official statistics show that South Africa's economy has sunk deeper into recession, with its gross domestic product for the second quarter of 2020 plummeting by 51%, largely as a result of COVID-19 and the country's strict lockdown. (Photo by Denis Farrell/AP Photo) 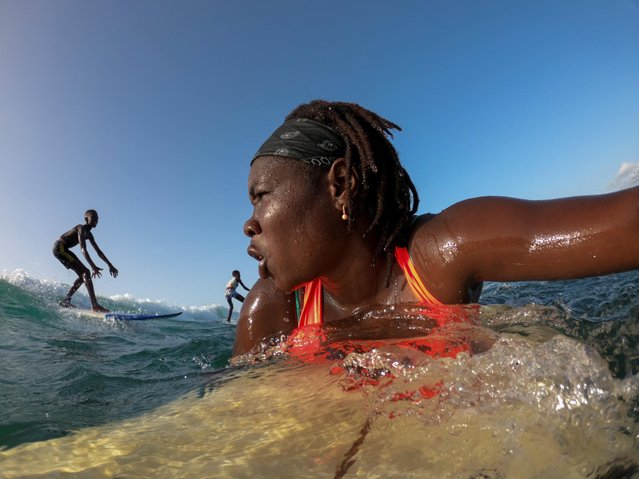 Khadjou Sambe, 25, surfs off the coast of Ngor, Dakar, Senegal, August 18, 2020. Growing up in the coastal capital of Dakar, Sambe never saw a Black woman surfing the Atlantic swells. As Senegal's first female professional surfer, Sambe is now inspiring the next generation to defy cultural norms and take to the waves as a surfing coach for local girls. “When I am in the water I feel something extraordinary, something special in my heart”, Sambe said. (Photo by Zohra Bensemra/Reuters) 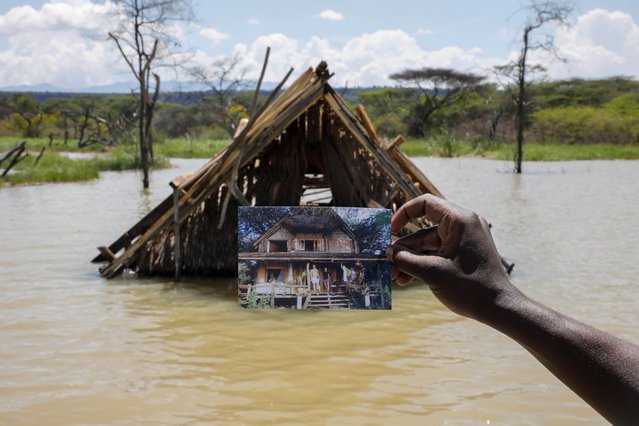 Camp manager James Owuor, holds a photo showing a structure before it was submerged under rising water due to months of unusually heavy rains, in lake Baringo, Kenya, August 25, 2020. (Photo by Baz Ratner/Reuters) 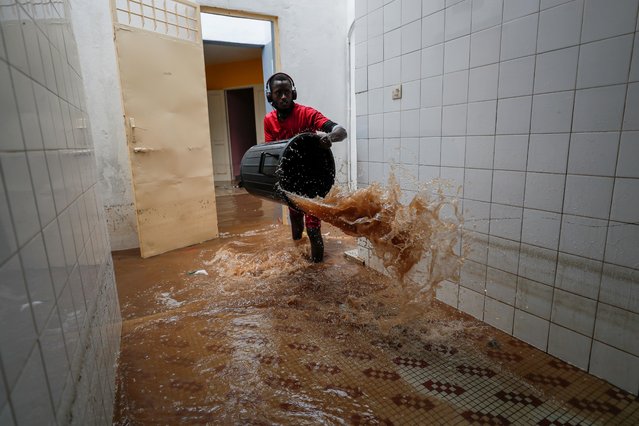 A volunteer removes water from a flooded health center after heavy rains in Guediawaye on the outskirts of Dakar, Senegal on September 6, 2020. (Photo by Zohra Bensemra/Reuters) 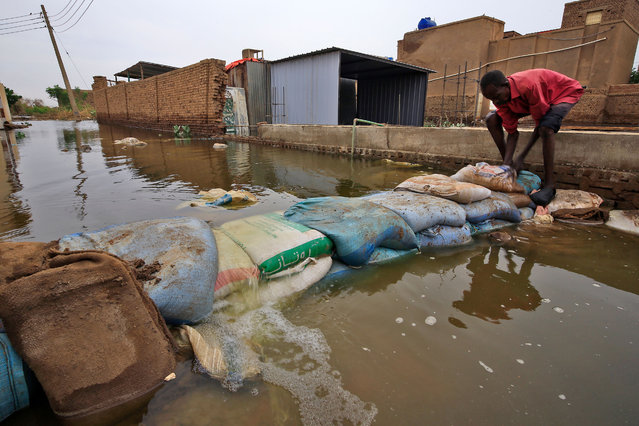 A Sudanese man build a barricade amidst flood waters in Tuti island, where the Blue and White Nile merge between the twin cities of the capital Khartoum and Omdurman, on September 3, 2020. On Tuti Island, the highest Nile waters since records began a century ago have left people struggling to build dams by filling bags with sand and small stones to stem the flood. Officials say that across Sudan seasonal floods have killed 94 people, injured 46 and destroyed or damaged over 60,000 homes, with the river level rising to 17.43 metres (57 feet feet). (Photo by Ashraf Shazly/AFP Photo) 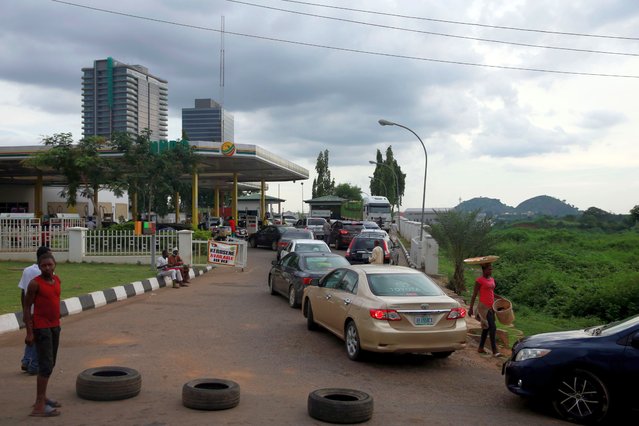 Vehicles queue for the pump after a new petrol price is introduced at the NNPC retail outlet in Abuja, Nigeria on September 3, 2020. (Photo by Afolabi Sotunde/Reuters) 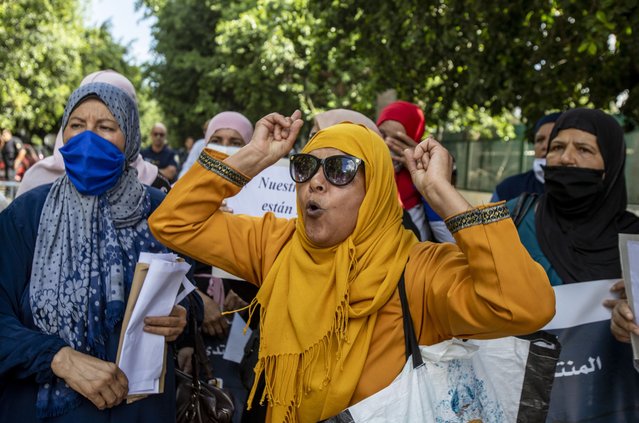 Tunisians stage a demonstration in front of Embassy of Spain demanding the release of Tunisian migrants who are held under bad living conditions at a migrant camp in Spain's Melilla city on September 04, 2020 in Tunis, Tunisia. (Photo by Nacer Talel/Anadolu Agency via Getty Images) 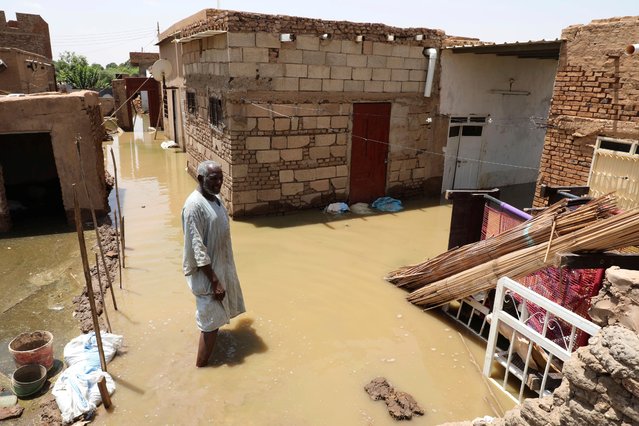 A man passes on the side of a flooded road in the town of Alkadro, about (20 km) north of the capital Khartoum, Sudan, Saturday, September 5, 2020. Sudanese authorities have declared their country a natural disaster area and imposed a three-month state of emergency across the country after rising floodwaters and heavy rainfall killed people and inundated over 100,000 houses since late July. (Photo by Marwan Ali/AP Photo) 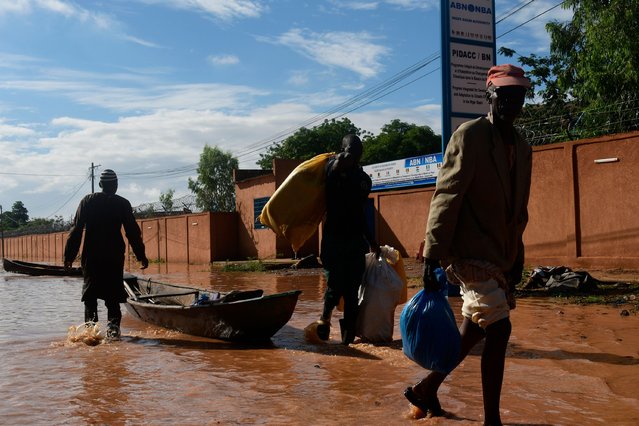 Residents carry their belongings after they left their flooded houses in Niamey on August 25, 2020, after heavy rains in Niger. (Photo by Boureima Hama/AFP Photo) 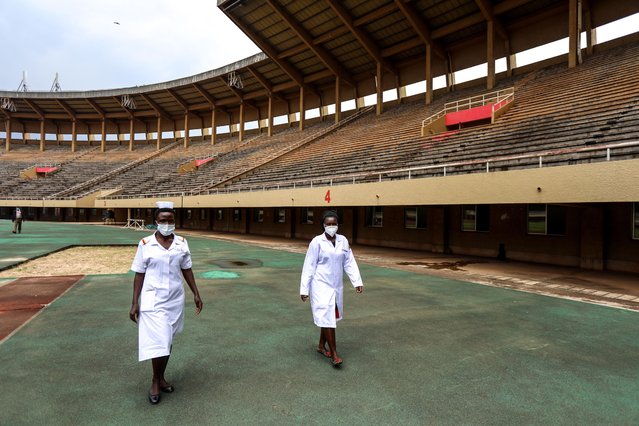 Medical workers are seen at Namboole National Stadium in the central Ugandan district of Wakiso, about 15 km east of the capital Kampala, on September 7, 2020. Uganda's ministry of health has converted parts of Namboole National Stadium into an auxiliary hospital to cater for the rapidly increasing number of COVID-19 cases in the east African country. (Photo by Hajarah Nalwadda/Xinhua News Agency) 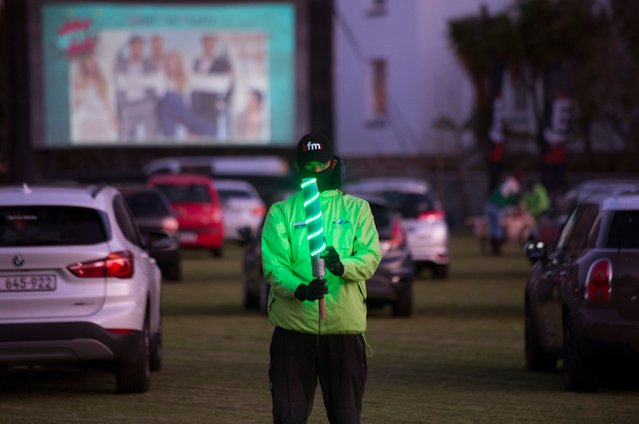 A park attendant helps people to park their cars in the right position at the Galileo drive-in, being held on a school sports field in Cape Town, on August 26, 2020. Drive-in cinemas have largely gone out of fashion, but with the Covid-19 pandemic affecting the country, this drive-in has been a way for people to safely go out and watch movies. (Photo by Rodger Bosch/AFP Photo) 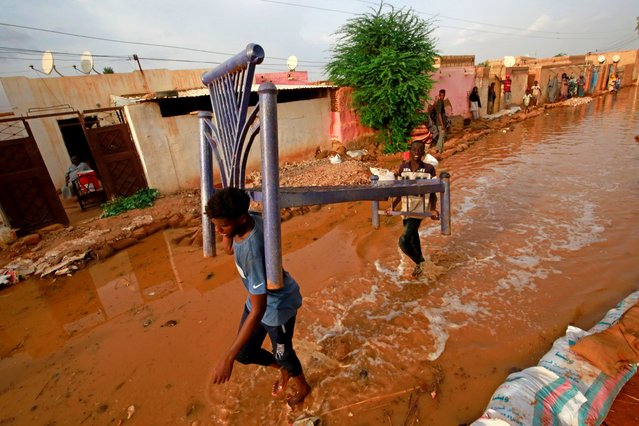 Sudanese youth carry a bed frame as they make their way through a flooded street in alqamayir area in the capital's twin city of Omdurman, on August 26, 2020. (Photo by Ashraf Shazly/AFP Photo) 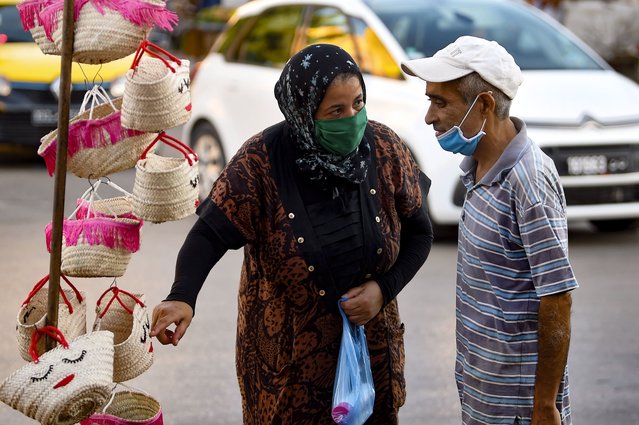 A Tunisian woman wearing a face mask for protection against the novel coronavirus speaks to a vendor at a market in the southwestern Tunisian town of Gabes on August 26, 2020, as cases of infection surge there. (Photo by Fethi Belaid/AFP Photo) 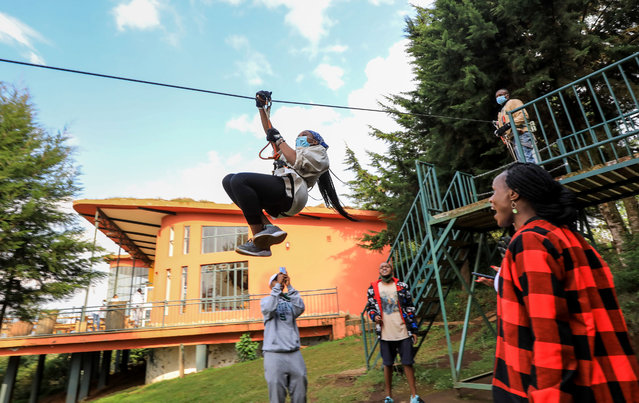 A Kenyan local tourist (C), descends on the longest zip line in East Africa with a length of 2.2kilometres which has 6 zip lines installed by Flying Fox company at “The Forest” inside Kereita forest during a subsidized tour trip organized by a local tour company in Kimende, Kiambu, Kenya, 29 August 2020. Due to the coronavirus pandemic the Kenyan tourism sector has been greatly affected with international tourist numbers still being on a decline despite lifting the ban on international flights, forcing the government to rely on local tourism by encouraging tour companies and hotels to adjust their rates in order to accommodatethe local tourists. (Photo by Daniel Irungu/EPA/EFE/Rex Features/Shutterstock) 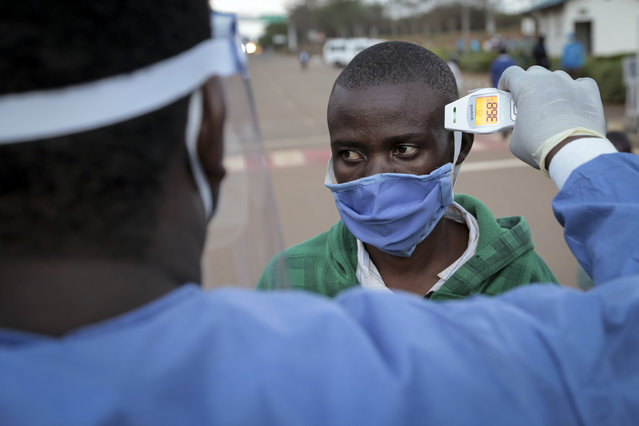 A Burundian refugee from Mahama camp in Rwanda is checked for fever as a precaution against the spread of the coronavirus after arriving back in Gasenyi, Burundi, Thursday, August 27, 2020. Nearly 500 Burundian refugees living in Rwanda began their journey back to their home country Thursday, the first group to return from Rwanda after five years in exile following deadly political violence that sent many fleeing. (Photo by Berthier Mugiraneza/AP Photo) 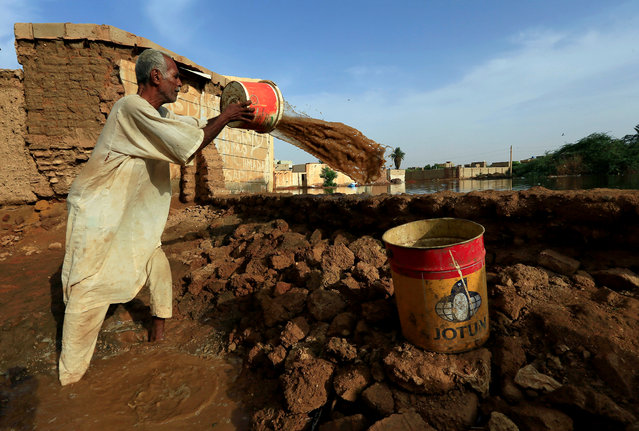 A resident pours out the waters of the Blue Nile floods within the Al-Ikmayr area of Omdurman in Khartoum, Sudan on August 27, 2020. (Photo by Mohamed Nureldin Abdallah/Reuters) 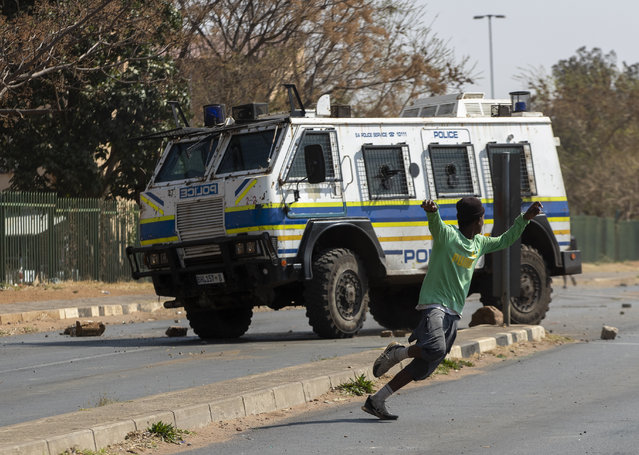