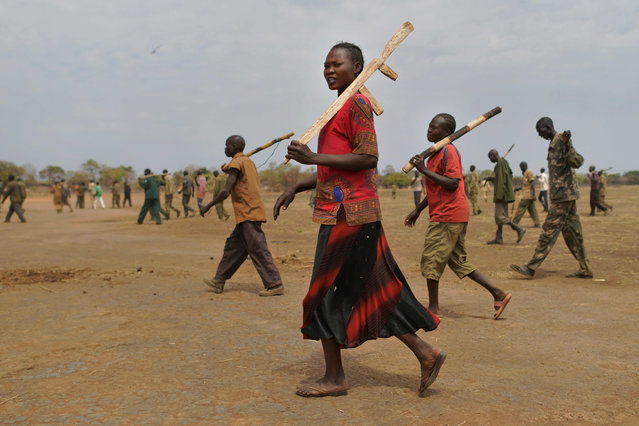 Trainee soldiers for a new unified army carry their wooden rifles while attending a reconciliation programme run by the United Nations Mission in South Sudan (UNMISS) at a makeshift barracks in Mapel on January 31, 2020. The programme aims at reunifying forces from government and in-opposition that had been previously warring since the breakdown of political relations between Pesident Salva Kiir and his former vice president, Riek Machar in 2013. Under an accord meant to end the bloodshed, these adversaries were brought together in military camps for retraining to graduate as comrades in a new, unified army, loyal only to the flag of South Sudan. (Photo by Tony Karumba/AFP Photo) 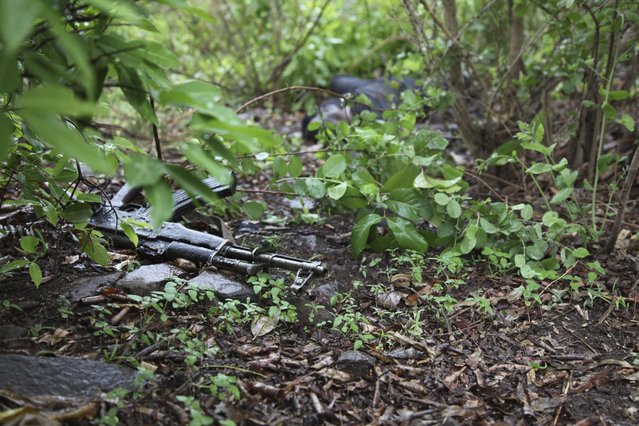 In this file photo taken Wednesday, June 21, 2017, a gun and a body are seen at the Campement Kangaba tourist resort following an attack near Bamako, Mali. As extremist violence grows across Africa, the United States is considering reducing its military presence on the continent, a move that worries its international partners who are working to strengthen the fight in the tumultuous Sahel region. (Photo by Baba Ahmed/AP Photo/File) 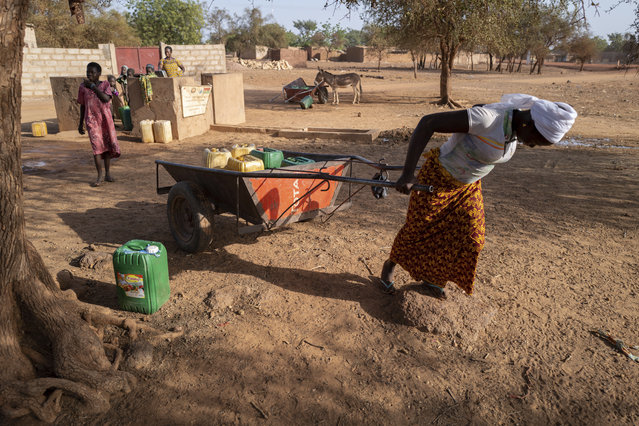 In this photo taken on Monday December 9, 2019 a displaced Burkinabe woman pulls a cart, in the Pissila town camp, near Kaya, Burkina Faso. Islamic extremists carried out a record number of attacks last year in Burkina Faso and the instability has now spread to the country's east. The violence in northern and now eastern Burkina Faso has displaced more than half a million people, according to the United Nations. And there are fears the unrest could throw elections planned for late 2020 into question. (Photo by Sylvain Cherkaoui/AP Photo) 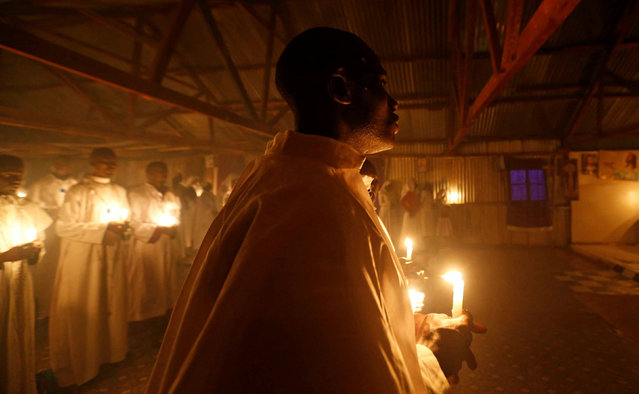 Christian faithful of the Legio Maria African Mission church hold candles as they attend the Christmas Eve mass in their church in the Fort Jesus area of Nairobi, Kenya, December 25, 2019. (Photo by Thomas Mukoya/Reuters) 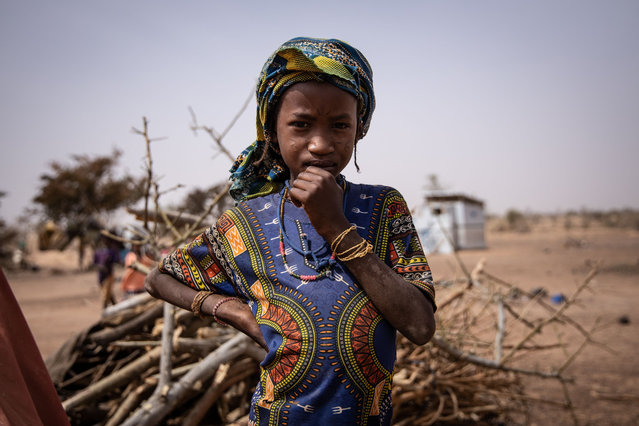 A young girl poses for a portrait in camp for internally displaced people in Barsalogho, on January 27, 2020. Barsalogho is a small town in northern Burkina Faso that hosts 10,000 displaced persons and refugees fleeing the resulting jihadist and inter-community violence. .Burkina Faso, which borders Mali and Niger, is facing jihadist attacks, which have killed more than 750 people since 2015. Under-equipped and poorly trained law enforcement agencies in Burkina Faso are unable to stop the spiral of violence. According to the United Nations, jihadist attacks in Mali, Niger and Burkina have resulted in 4,000 deaths in 2019. (Photo by Olympia De Maismont/AFP Photo) 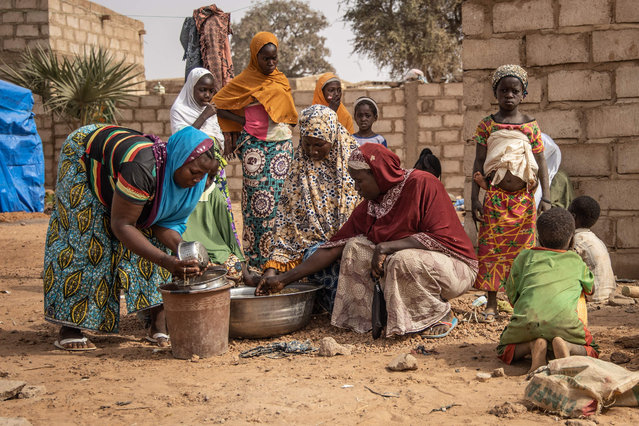 Women and children stand outside an accommodation made available by the community for Internally Displaced People (IDP) from northern Burkina Faso in Kaya, on January 22, 2020. Since the attack on the Nagraogo market and on the village of Alamou, hundreds of people have fled the area to Kaya where there is a camp for Internally Displaced People (IDP), about 100 kilometres north of the capital Ouagadougou. (Photo by Olympia de Maismont/AFP Photo) 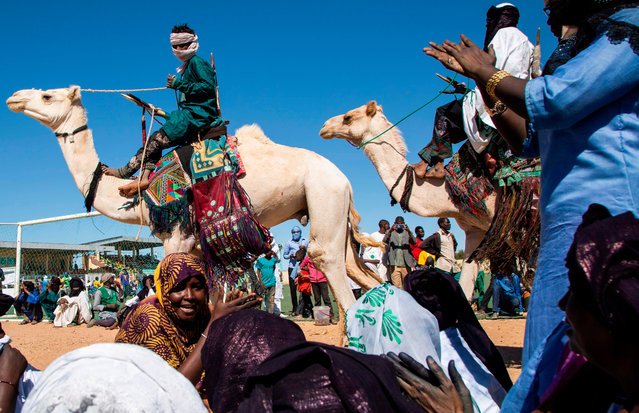 Nomads parade on camels in the Agadez stadium under the songs of Tuareg women, on the occasion of the Grand Marathon du Ténéré on 29 December 2019. In a Saharan setting of acacias and camels, runners participated on December 29, 2019, in the first marathon in the history of Niger, near the city of Agadez under the close surveillance of dozens of soldiers deployed to avoid any attack by jihadists. (Photo by Nora Schweitzer/AFP Photo) 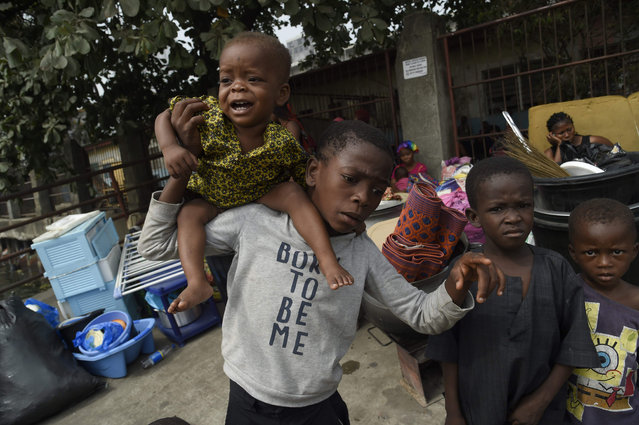 Children are seen among personal belongings following forceful eviction and demolition of homes by the military at Takwa Bay waterfront settlement in Lagos, on January 21, 2020. More than thousands residents have been displaced following military eviction for “security reasons and to forestall stealing and vandalisation of oil pipeline in the area” according to the residents. (Photo by Pius Utomi Ekpei/AFP Photo) 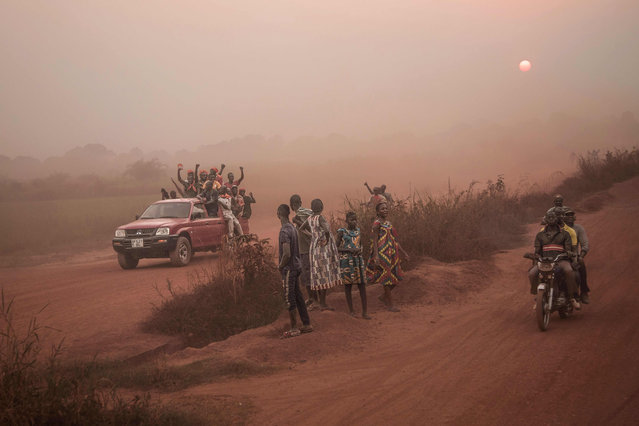 People celebrate as they drive cars and motorbikes for the arrival of former Central African Republic's President François Bozize in the Boeing district of Bangui, on December 21, 2019. The former president of the Central African Republic (CAR), Francois Bozize, has returned to the country, more than six years after he was forced from power and fled abroad, his party told AFP on December 16, 2019, in a claim rejected by the government. Bozize faces an international arrest warrant, initiated by the CAR in 2013, for crimes against humanity and incitement to genocide. (Photo by Florent Vergnes/AFP Photo) 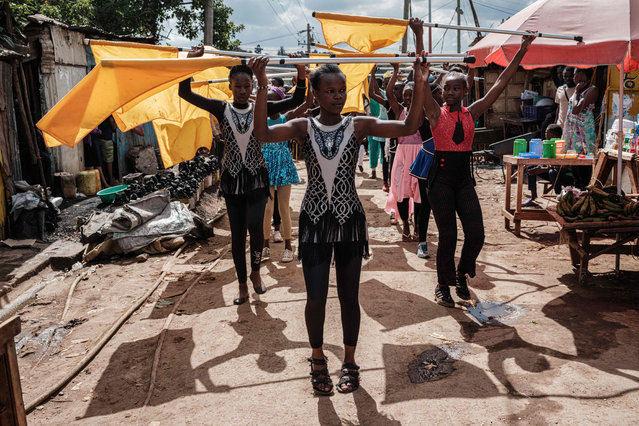 Members of “Project Elimu” perform as a part of their presentation in a street of Kibera slum in Nairobi, Kenya, on December 14, 2019. Project Elimu is Kenyan Non-Profit Organization founded by former professional Kenyan dancer Mike Wamaya to provide wide range of extracurricular activities to schools within informal settlements to empower children and teachers as over 400 children from 25 different schools participate. (Photo by Yasuyoshi Chiba/AFP Photo) 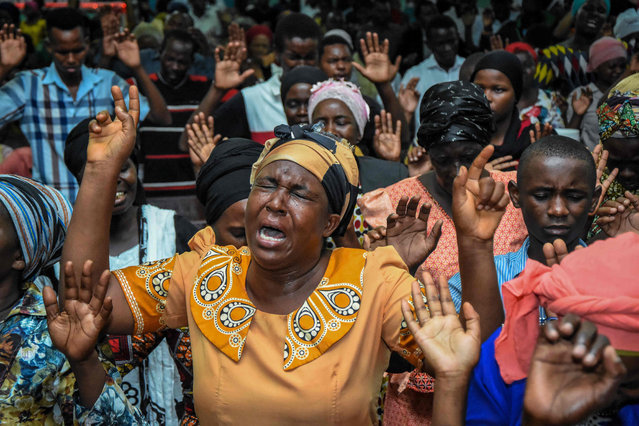 Believers immerse in prayer during a special mass held to usher in the New Year at Full Gospel Bible Fellowship church in Dar es Salaam, Tanzania, on January 1, 2020. (Photo by Ericky Boniphace/AFP Photo) 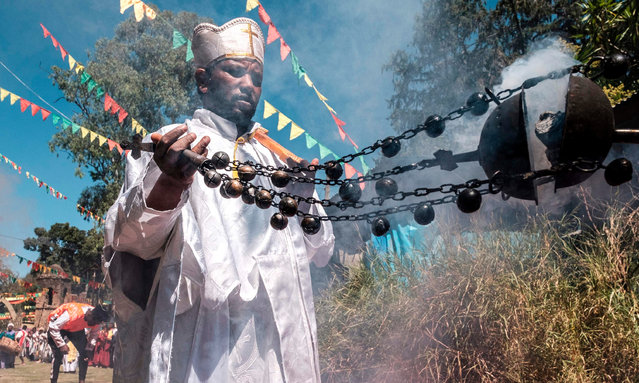 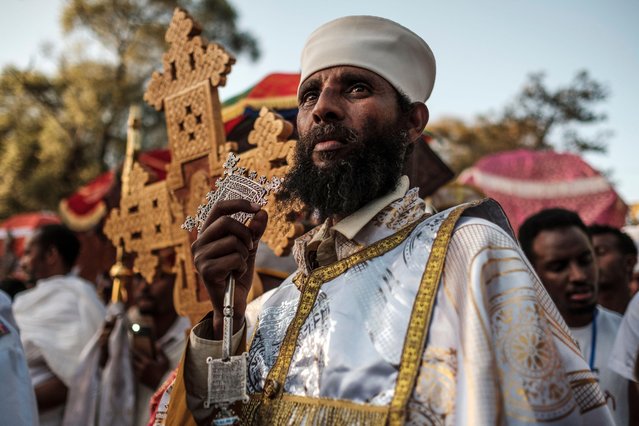 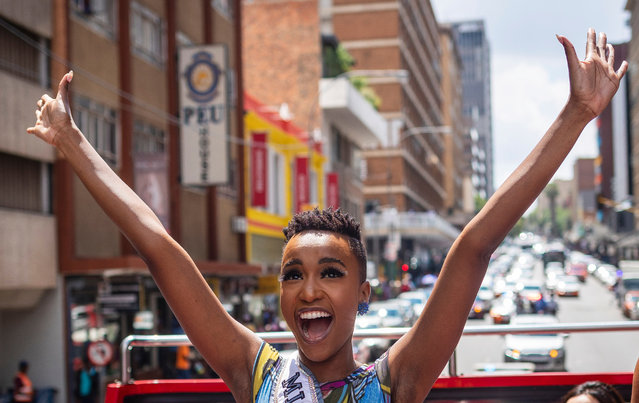 Miss Universe Zozibini Tunzi (C) waves at fans as she is driven through the streets of Johannesburg during her homecoming parade after being crowned in December 2019, Johannesburg, South Africa, 13 February 2020. Zozibini is the first black women to win the title. Miss Universe is an annual international beauty pageant that is run by the United States-based Miss Universe Organization. (Photo by Kim Ludbrook/EPA/EFE) 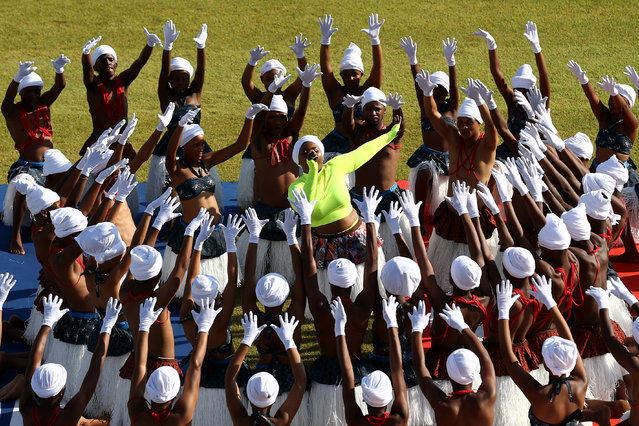 Local dancers perform during the opening ceremony ahead of the ICC U19 Cricket World Cup Group D match between South Africa and Afghanistan at De Beers Diamond Oval on January 17, 2020 in Kimberley, South Africa. (Photo by Jan Kruger-ICC/ICC via Getty Images) 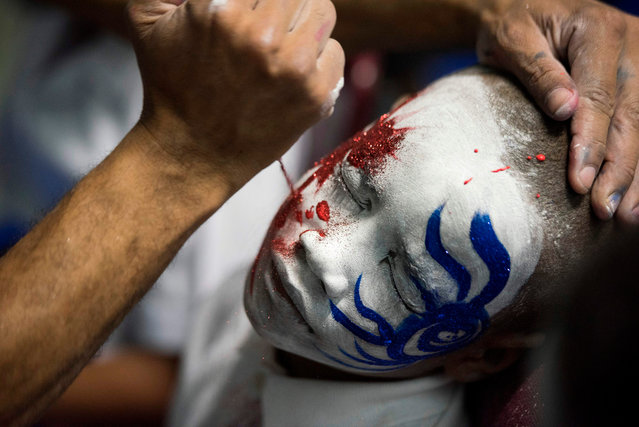 A child member of a minstrel troupe have make up applied before the start of the annual “Tweede Nuwe Jaar” (Second New Year) Cape Town Minstrels Parade on January 04, 2019, in Cape Town. The Cape Town Minstrels Parade sees more than 45 troupes, consisting of between 25000 and 30000 performers, dressed with bright coloured costumes, and marching while playing music and dancing, through the centre of Cape Town. The “Tweede Nuwe Jaar” celebration dates back to the time before slavery was abolished in the Cape colony, during which slaves were allowed to relax on the day following New Years Day. (Photo by Rodger Bosch/AFP Photo) 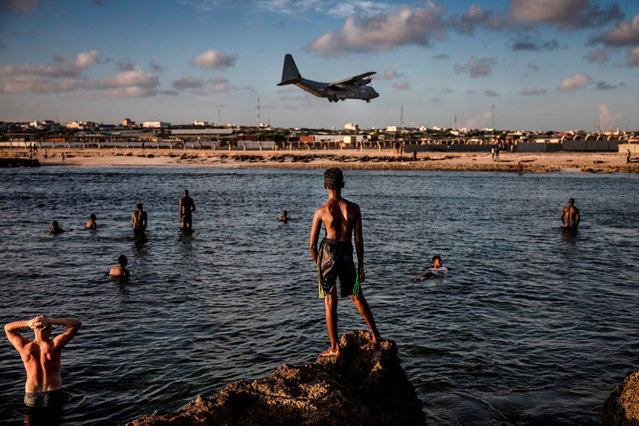 Soldiers enjoying a day off and Somali people look from the beach at a military plane landing within Mogadishu’s airport base in Mogadishu, Somalia, on December 13, 2019. (Photo by Luis Tato/AFP Photo) 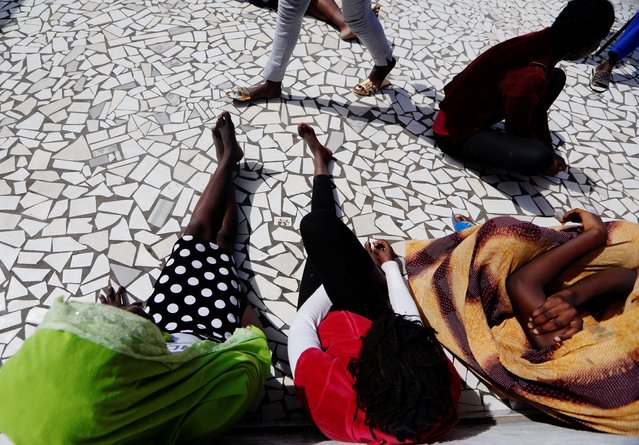 A 17-year-old girl, who said she was raped by her friend, sits with other women at La Maison Rose, a shelter for women and girls who have fled abuse, rape, forced marriage and other trauma in Dakar, Senegal, a country where rape was a misdemeanor and not a crime on January 7, 2020. Widely publicized cases of rape in Senegal paved the way for the change in the law. After a unanimous vote in parliament to criminalize rape, President Macky Sall signed the decree into law on Jan. 10. Previously, rape drew a maximum prison sentence of 10 years and campaigners say convictions were rare. The new law sets a minimum of 10 years and a maximum of life. (Photo by Zohra Bensemra/Reuters) 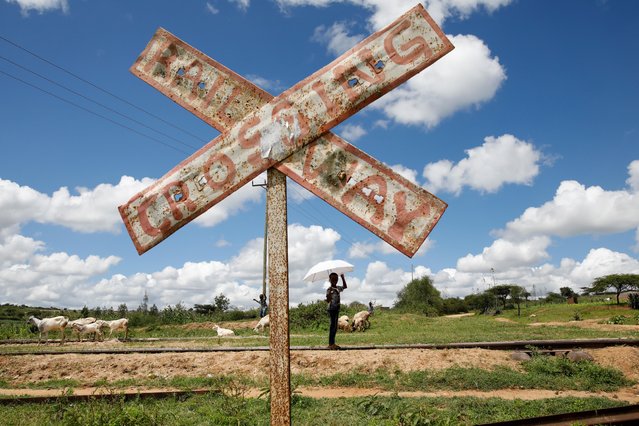 A child holds an umbrella as he stands on SGR railway tracks near the town of Kiu, south of Nairobi, Kenya, December 16, 2019. The new $3.3 billion high-speed railway, part of China's “One Belt, One Road” initiative, has left towns like Kiu without stations or adequate service, its residents say. (Photo by Baz Ratner/Reuters) 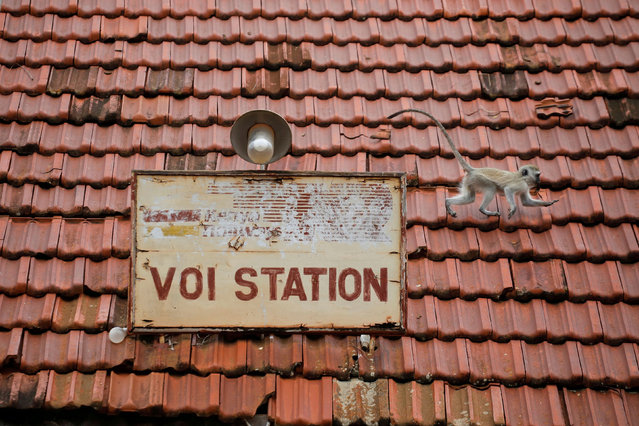