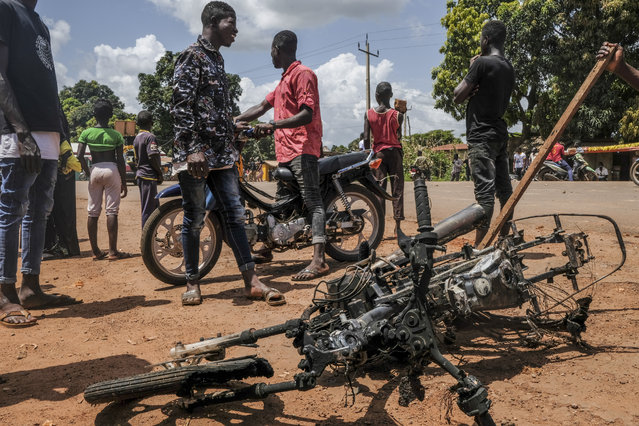 The burned motorcycle of an opposition activist, who was lightly injured and fled, lies on the ground as supporters of the ruling Rally of the Guinean People (RPG) party demonstrate against the opposition Union of Democratic Forces of Guinea (UFDG) party and to block the visit of their leader, in the streets of Kankan, Guinea Sunday, October 11, 2020. The stage is set for Oct. 18 presidential elections pitting incumbent President Alpha Conde, 82, who is bidding for a third term, against opposition leader Cellou Dalein Diallo, who was previously defeated by Conde in both the 2010 and 2015 elections. (Photo by Sadak Souici/AP Photo) 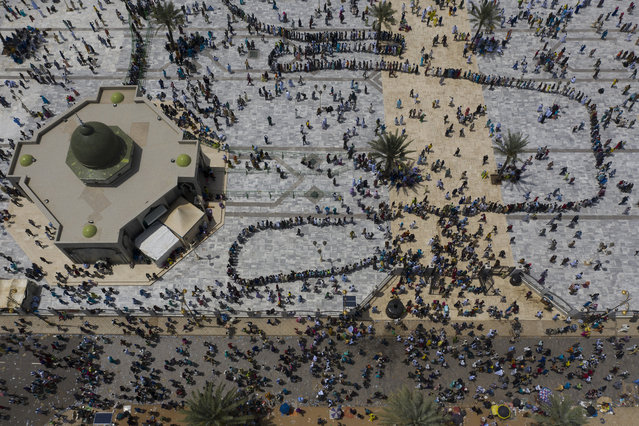 In this aerial photo taken with a drone, pilgrims from the Mouride Brotherhood arrive at the Grand Mosque of Touba during the celebrations of the Grand Magal of Touba, in Senegal, Tuesday, October 6, 2020. Despite the coronavirus pandemic, thousands of people from the Mouride Brotherhood, an order of Sufi Islam, gather for the annual religious pilgrimage to celebrate the life and teachings of Cheikh Amadou Bamba, the founder of the brotherhood. (Photo by Leo Correa/AP Photo) 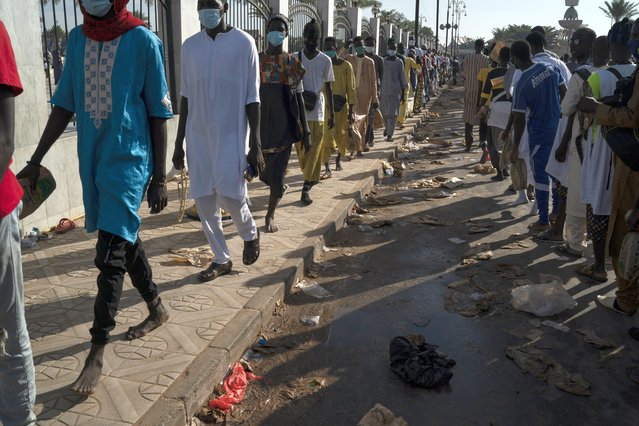 Wearing protective face masks, pilgrims from the Mouride Brotherhood queue to enter the Grand Mosque of Touba during the celebrations of the Grand Magal of Touba, in Senegal, Tuesday, October 6, 2020. (Photo by Leo Correa/AP Photo) 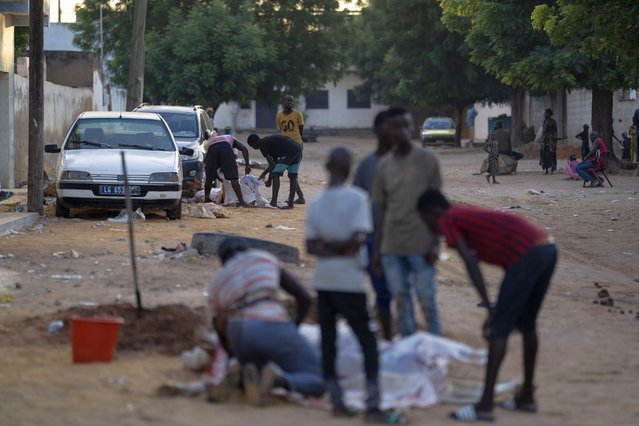 People cut oxen in pieces after slaughtering it on a street, in preparation for the feasts as part of the celebrations of the Grand Magal of Touba, Senegal, Tuesday, October 6, 2020. (Photo by Leo Correa/AP Photo) 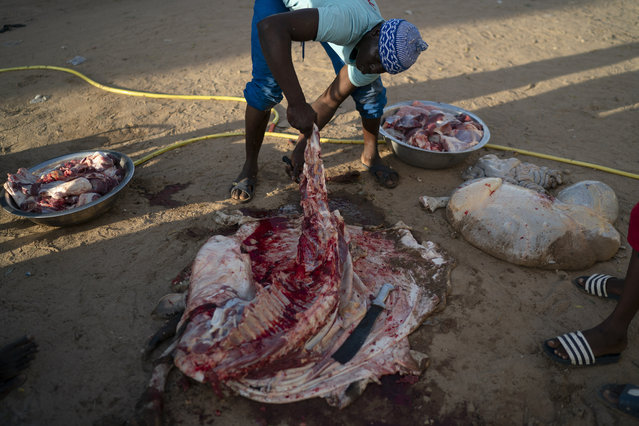 A man cuts an ox in pieces after slaughtering it on a street, in preparation for a feast as part of the celebrations of the Grand Magal of Touba, in Senegal, Tuesday, October 6, 2020. (Photo by Leo Correa/AP Photo) 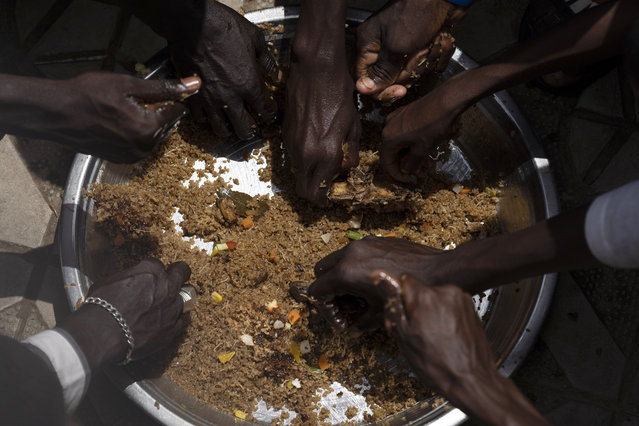 Pilgrims from the Mouride Brotherhood share a big dish of traditional Senegalese food, distributed by volunteers, outside the Grand Mosque of Touba, as part of the celebrations of the Grand Magal of Touba, in Senegal, Tuesday, October 6, 2020. (Photo by Leo Correa/AP Photo) 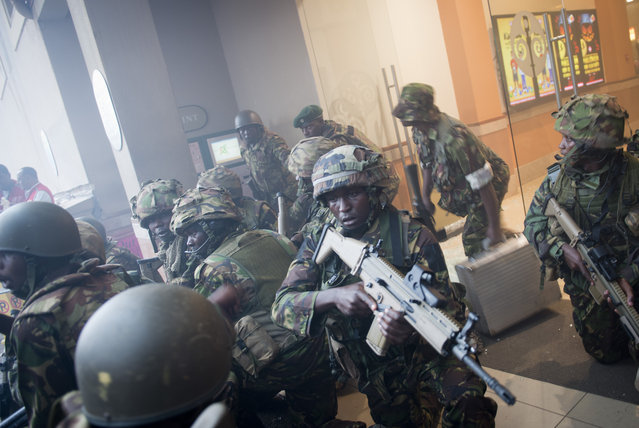 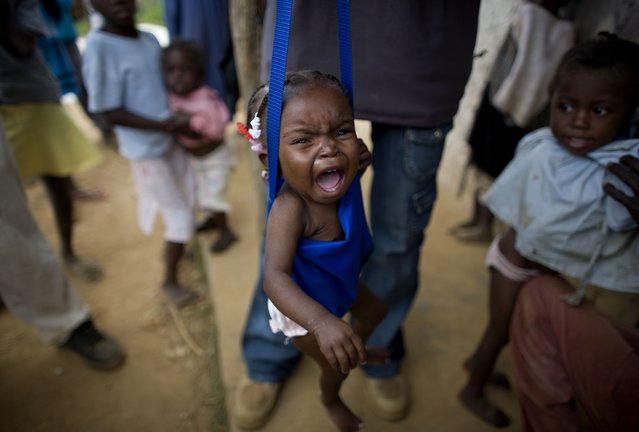 In this Thursday, January 15, 2009 file photo, Andre Mislene, 15-months, hangs from a scale at the World Food Program (WFP) and Save the Children Clinic for emergency food and medical care in Baie d'Orange, Haiti. The World Food Program on Friday, Oct. 9, 2020 won the 2020 Nobel Peace Prize for its efforts to combat hunger and food insecurity around the globe. (Photo by Ariana Cubillos/AP Photo/File) 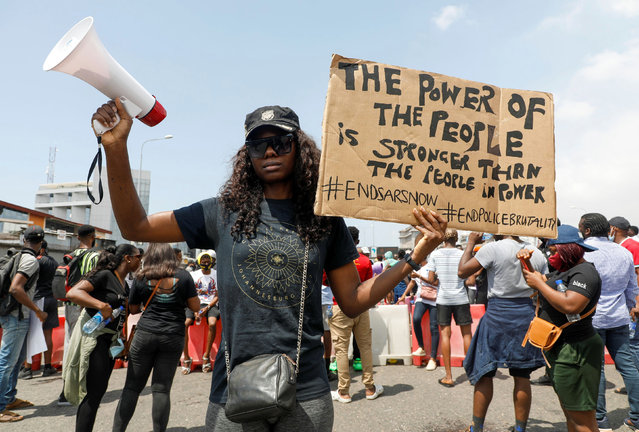 A demonstrator holds a banner during a protest against alleged police brutality, in Lagos, Nigeria on October 12, 2020. (Photo by Temilade Adelaja/Reuters) 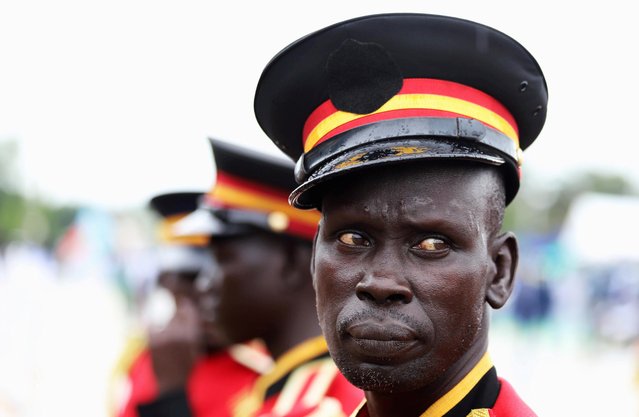 South Sudan's military officer attends a parade before the signing of peace agreement between the Sudan's transitional government and Sudanese revolutionary movements to end decades-old conflict, in Juba, South Sudan on October 3, 2020. (Photo by Samir Bol/Reuters) 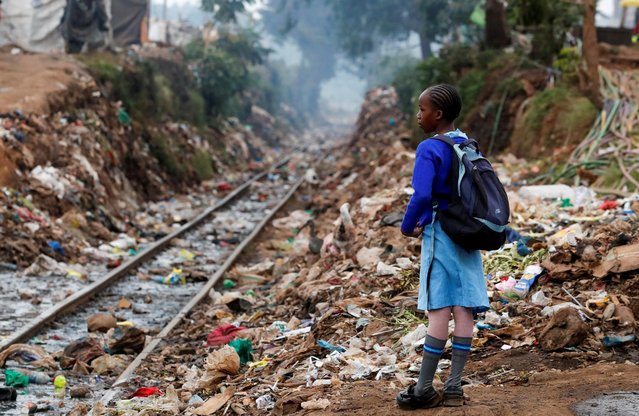 A schoolgirl stands next to the Kenya-Uganda railway line during the partial reopening of schools, after the government scrapped plans to cancel the academic year due to the coronavirus disease (COVID-19) pandemic, in Kibera slums of Nairobi, Kenya on October 12, 2020. (Photo by Thomas Mukoya/Reuters) 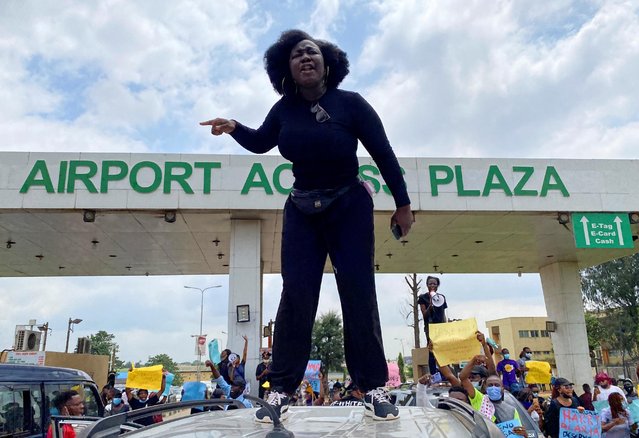 A demonstrator stands atop a vehicle and shouts slogans as others carry banners while blocking a road leading to the airport, during a protest over alleged police brutality, in Lagos, Nigeria on October 12, 2020. (Photo by Seun Sanni/Reuters) 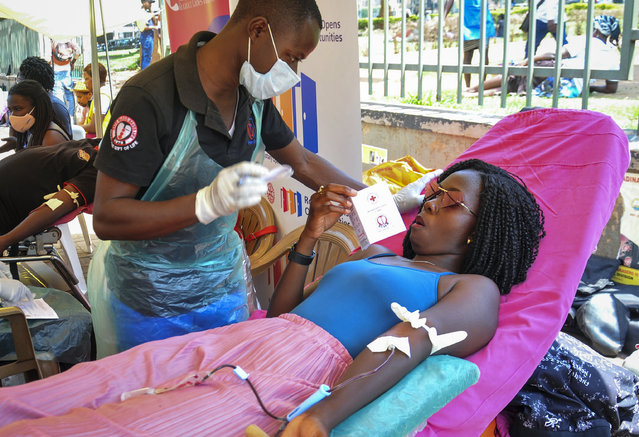 Aidah Kobusingye, right, gives blood at a blood-donation drive organized by the Rotary club and Uganda Blood Transfusion Services in City Square, Kampala, Uganda Saturday, September 19, 2020. Health authorities in Uganda say the supply of blood has sharply declined since the start of the coronavirus pandemic as fewer people donate and schools remain closed. Students, especially those in secondary school, are normally the largest group of blood donors in the East African country. (Photo by Ronald Kabuubi/AP Photo) 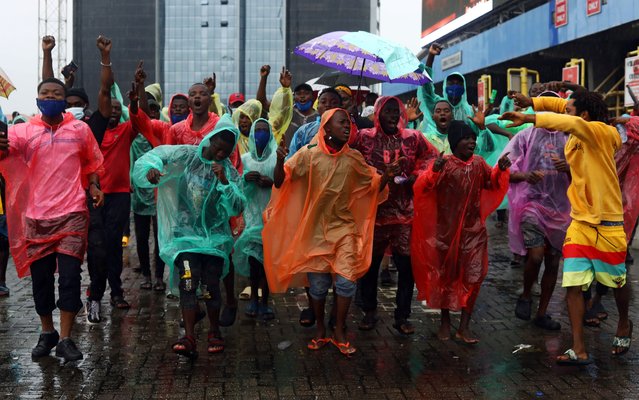 Demonstrators wearing raincoats shout slogans as they march in the rain during a protest over alleged police brutality, in Lagos, Nigeria on October 14, 2020. (Photo by Temilade Adelaja/Reuters) 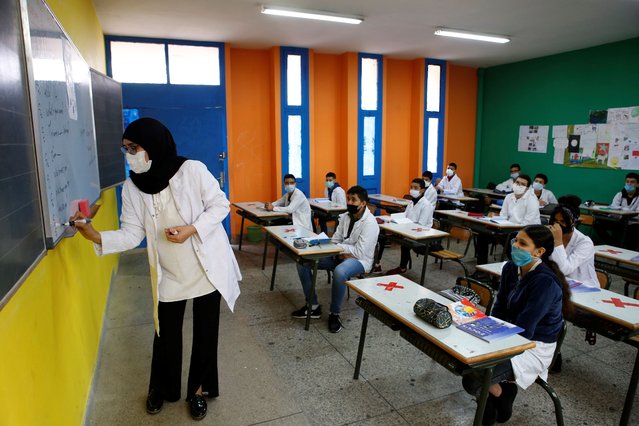 The teacher wears a face mask at Mansour Eddahbi College in the Derb El Kabir district of the AL Fida prefecture in Casablanca, Morocco, Monday, October 5, 2020. Today it is the start of the school year in Casablanca, with a delayed start due to the COVID-19 pandemic. (Photo by Abdeljalil Bounhar/AP Photo) 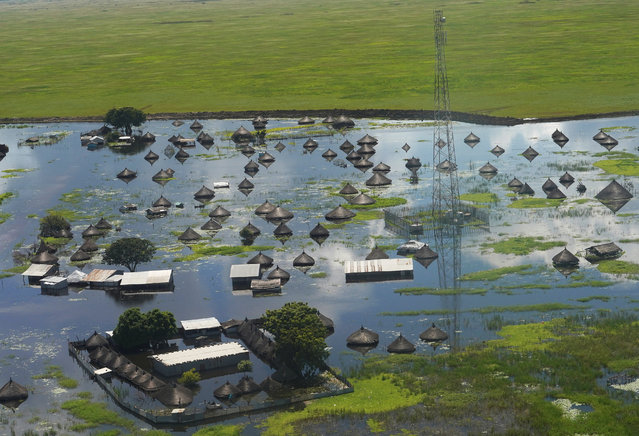 An aerial view shows flooded homes within a village after the River Nile broke the dykes in Jonglei State, South Sudan on October 5, 2020. (Photo by Andreea Campeanu/Reuters) 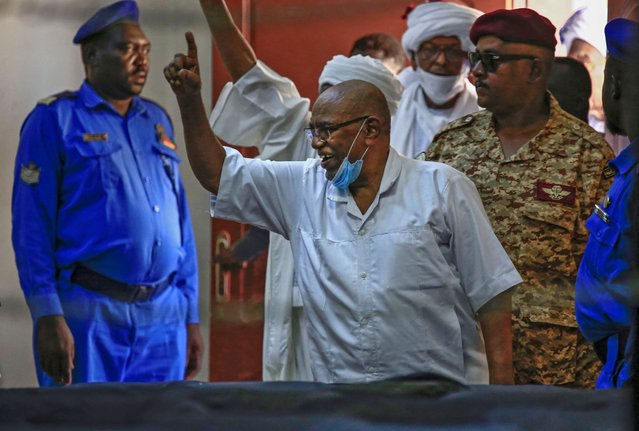 Sudan's ousted president Omar al-Bashir (C) gestures as he arrives for his trial in the capital Khartoum, on October 6, 2020, along with 27 co-accused over the 1989 military coup that brought him to power. (Photo by Ashraf Shazly/AFP Photo) 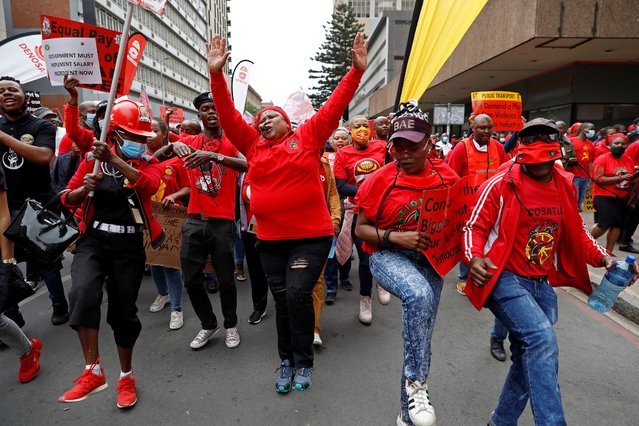 Members of Congress of South African Trade Unions (Cosatu) chant while marching to the National Treasury during their national strike against corruption and unemployment in Pretoria on 07 October, 2020. (Photo by Phill Magakoe/AFP Photo) 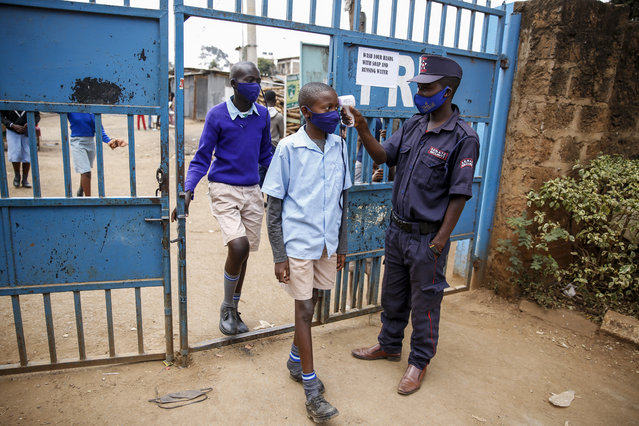 Schoolchildren have their temperature taken as they arrive at the Olympic Primary School in Kibera, one of the capital Nairobi's poorest areas, in Kenya Monday, October 12, 2020. Kenya partially re-opened schools on Monday to allow those students due for examinations which had been postponed to prepare, following a total closure of all educational institutions enacted since March to curb the spread of the coronavirus pandemic. (Photo by Brian Inganga/AP Photo) 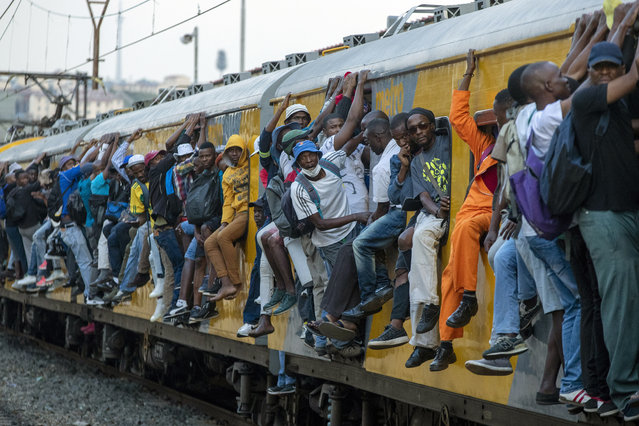 In this Monday, March 16, 2020 file photo, train commuters hold on to the side of an overcrowded passenger train in Soweto, South Africa. Up to 150 million people could slip into extreme poverty, living on less than $1.90 a day, by late next year depending on how badly economies shrink during the COVID-19 pandemic, the World Bank said Wednesday, Oct. 7, 2020 in an outlook grimmer than before. (Photo by Themba Hadebe/AP Photo/File)
Edit Del
23 Oct 2020 00:01:00, post received 0 comments
Publication archive:
←   →
Popular tags:
All tags
Last searches: