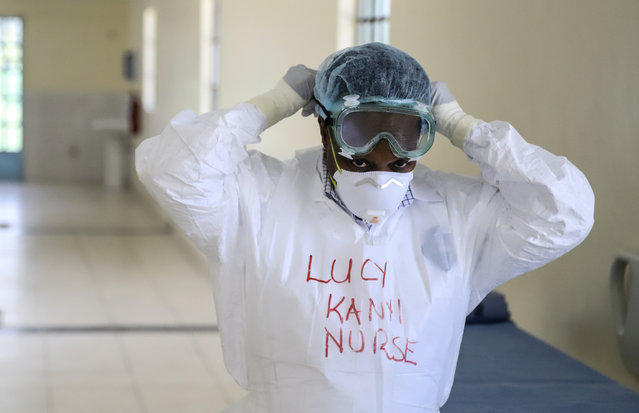 In this Friday, March 6, 2020 file photo, Kenyan nurse Lucy Kanyi, with her name written on her protective clothing so she can be recognized when wearing it, demonstrates to media the facilities and protective equipment to be used to isolate and treat coronavirus cases, at the infectious disease unit of Kenyatta National Hospital in the capital Nairobi, Kenya. Authorities in Kenya said Friday, March 13, 2020, that a Kenyan woman who recently traveled from the United States via London has tested positive for the new COVID-19 coronavirus, the first case in the East African country. For most people, the new coronavirus causes only mild or moderate symptoms, such as fever and cough. For some, especially older adults and people with existing health problems, it can cause more severe illness, including pneumonia. (Photo by Patrick Ngugi/AP Photo/File) 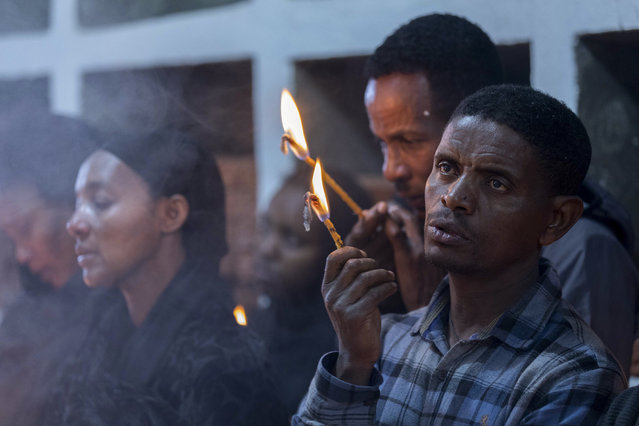 Ethiopian relatives of some of the crash victims light candles and gather at an anniversary memorial service to remember those who died when Ethiopian Airlines flight ET302, a Boeing 737 Max, crashed shortly after takeoff on March 10, 2019 killing all 157 on board, at the Holy Trinity Cathedral in Addis Ababa, Ethiopia Sunday, March 8, 2020. (Photo by Mulugeta Ayene/AP Photo) 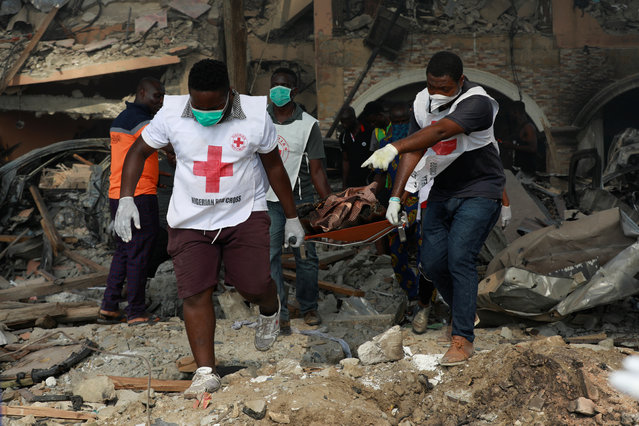 Paramedics carry a stretcher containing the body of a victim from one of the collapsed buildings at the scene of the pipeline explosion at Abule Ado in Lagos, Nigeria on March 15, 2020. (Photo by Temilade Adelaja/Reuters) 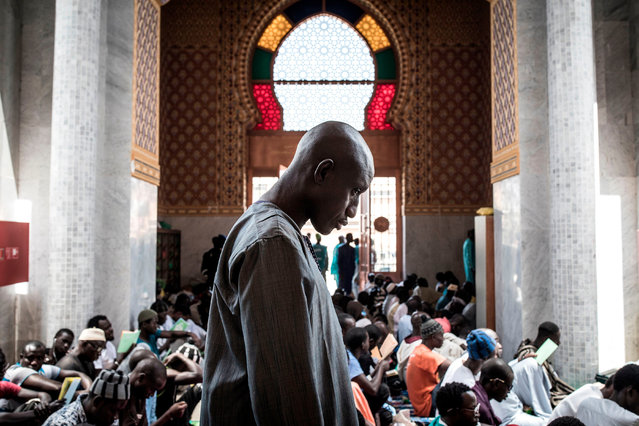 A Muslim worshipper attends a mass prayer against COVID-19, the new coronavirus, in Dakar on March 4, 2020, after two cases were confirmed in Senegal in the previous days. Across the world, 3,155 people have died from the virus. More than 92,723 have been infected in 78 countries and territories, according to AFP's latest toll based on official sources at 1700 GMT on March 3, 2020. (Photo by John Wessels/AFP Photo) 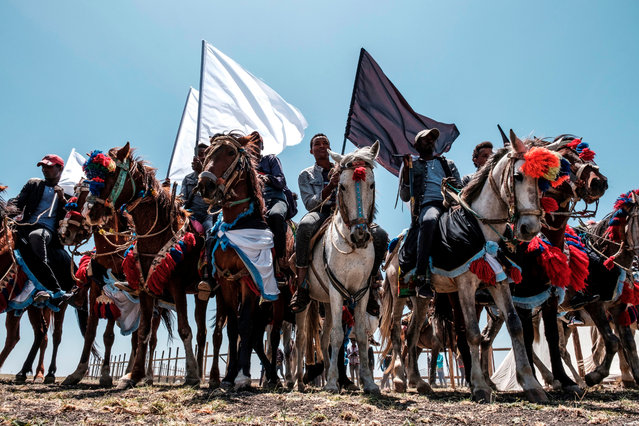 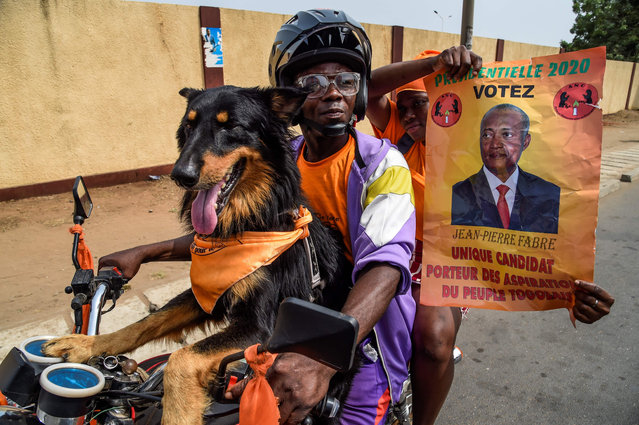 Supporters of Togo's major opposition candidate of the National Alliance for Change (ANC) party Jean-Pierre Fabre ride with a dog on a motorcycle during the last election rally of the campaign in Lome on February 20, 2020. Opposition leader Jean-Pierre Fabre has intensified campaign ahead of February 22 election to defeat incumbent President Faure Gnassingbe whose family has been ruling Togo since over five decades, yet is seeking re-election for the fourth term despite widespread protests by the opposition calling for the end of his family's decades-long grip on power. (Photo by Pius Utomi Ekpei/AFP Photo) 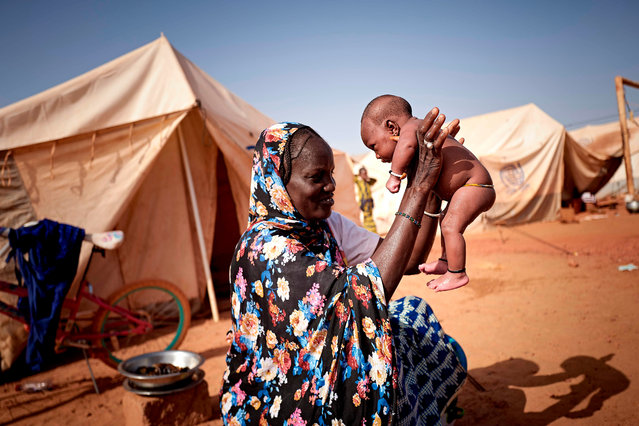 A woman plays with her baby in a camp for IDPs in Sevare on March 02, 2020. In total 151 households and 712 Internal Displaced People fled their villages in central Mali and found a shelter in the camp CAN 2002 of Sevare. (Photo by Michele Cattani/AFP Photo) 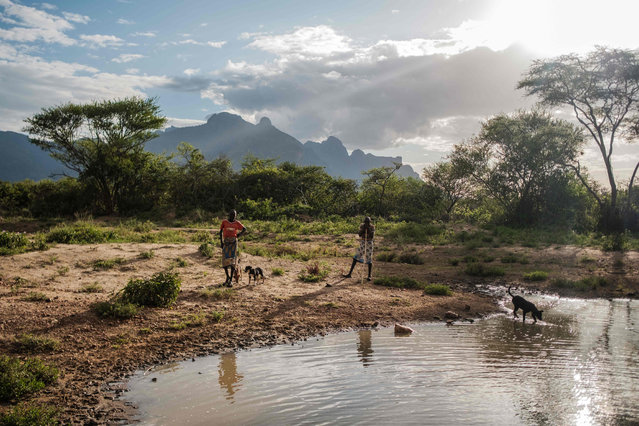 Residents and their dogs stand next to a water hole in Nakaprit on February 15, 2020. Nakaprit is home to traditional pastorialists who depend on their cattle for survival and with the threat of locust invasions, locals are worried the vegetation will be destroyed and their cows won’t be able to feed. (Photo by Sumy Sadurni/AFP Photo) 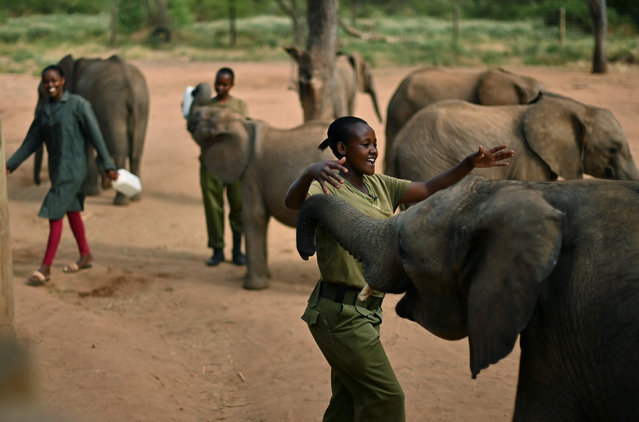 Naomi, a senior women elephant keeper, sings to one of the older orphan calves at Reteti Elephant Sanctuary in Namunyak Wildlife Conservancy, central Kenya, on February 26, 2020. The community-owned and run elephant sanctuary within the Namunyak conservancy in central Kenya, gives care to abandoned or orphaned elephant calves and conditions them for release back to the wild as they approach four-years-old. The sancturay also benefits the local Samburu people who live alongside the animals, and who are seen as an expanding community-driven grassroots conservation movement in northern Kenya. Each year, some five to ten elephants calves are rescued from a population of around 8,700. (Photo by Tony Karumba/AFP Photo) 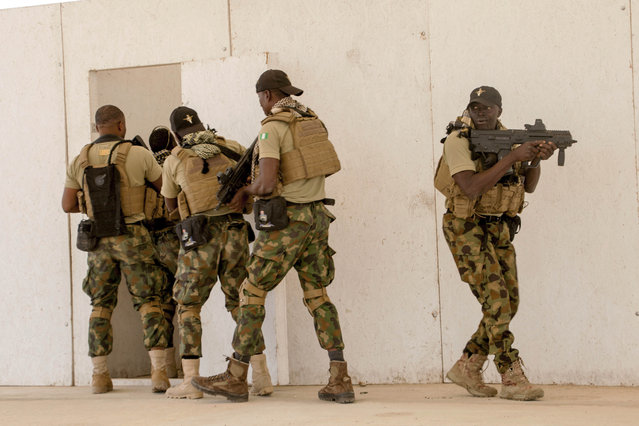 In this Tuesday February 18, 2020, photo, Nigerian Navy Special Boat Service troops exercise under the supervision of British special forces during U.S. military-led annual counterterrorism exercise in Thies, Senegal. More than 1,500 service members from the armies of 34 African and partner training nations have assembled for the Flintlock exercises in Senegal and Mauritania, the two countries in West Africa's sprawling Sahel region that so far have not been hit by violence from extremists linked to al-Qaida or the Islamic State group. (Photo by Cheikh A.T Sy/AP Photo) 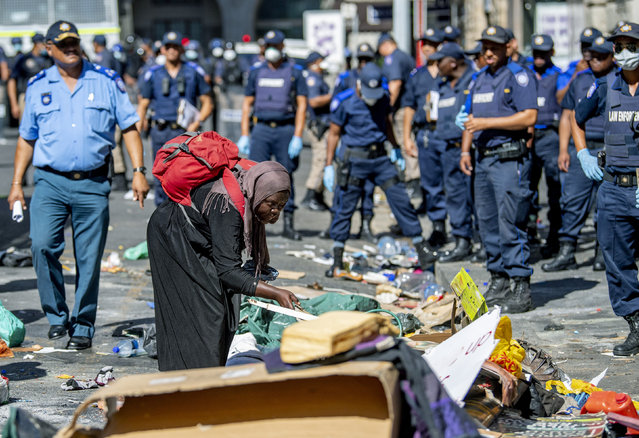 A woman sorts out her belongings, outside the Central Methodist Mission Church in Cape Town, South Africa, Sunday, March 1, 2020 as city officials and police move in to evict them. Hundreds of migrants have been removed from central Cape Town by South African authorities following a months-long stand-off. The migrants removed on Sunday had demanded to be relocated to other countries claiming they had been threatened by xenophobic violence last year. (Photo by AP Photo/Stringer) 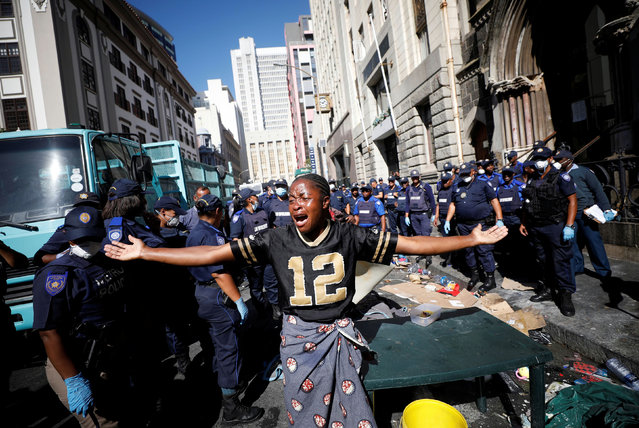 A woman wails as law enforcement officials move in to disperse a group of immigrants who had occupied a historic church and a square demanding to be moved to another country as they claimed to feel not safe because of xenophobic attacks, in central Cape Town South Africa, March 1, 2020. (Photo by Mike Hutchings/Reuters) 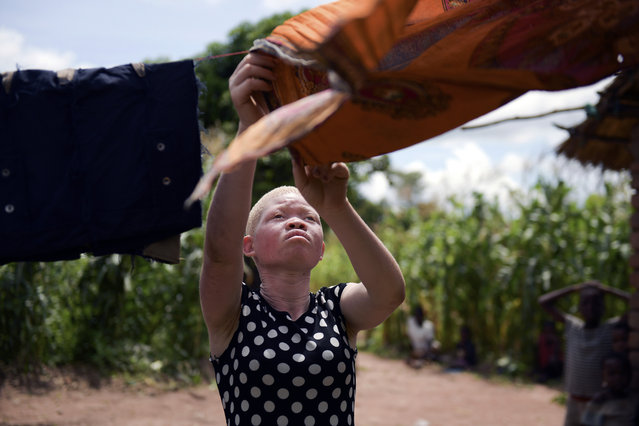 In this photo taken Sunday, February 9, 2020, Catherine Amidu hangs out washing to dry outside her home in Machinga, Malawi. People with albinism in several African countries live in fear of being abducted and killed in the mistaken belief that their body parts carry special powers and can be sold for thousands of dollars. 17-year-old Amidu survived an attempt on her life in 2017. (Photo by Thoko Chikondi/AP Photo) 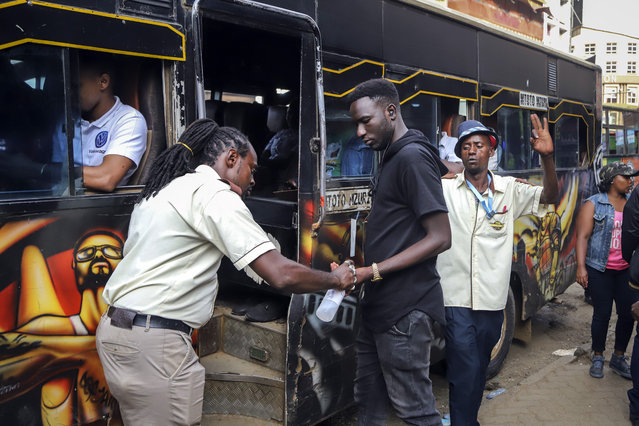 A bus conductor disinfects the hands of a passenger, after the government directed all operators of “matatus”, or public minibuses, to provide hand sanitizer to their clients, on a busy street in downtown Nairobi, Kenya Friday, March 13, 2020. Authorities in Kenya said Friday that a Kenyan woman who recently traveled from the United States via London has tested positive for the new coronavirus, the first case in the East African country. (Photo by Patrick Ngugi/AP Photo) 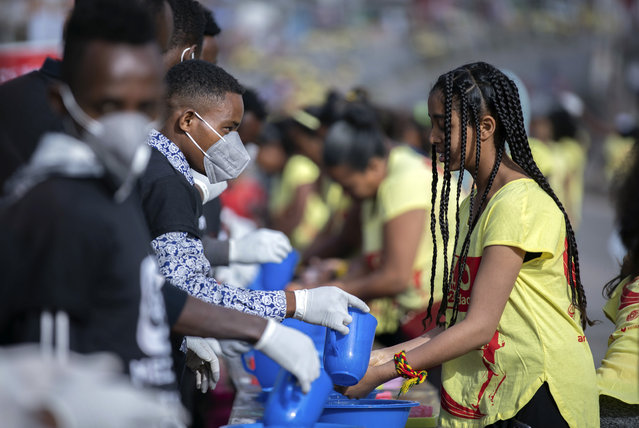 Volunteers, left, provide soap and water for participants to wash their hands against the new coronavirus at a women's 5km fun run in the capital Addis Ababa, Ethiopia Sunday, March 15, 2020. Ethiopia reported on Thursday its first case of the new coronavirus which causes COVID-19. For most people, the new coronavirus causes only mild or moderate symptoms, such as fever and cough but for some, especially older adults and people with existing health problems, it can cause more severe illness, including pneumonia. (Photo by Mulugeta Ayene/AP Photo) 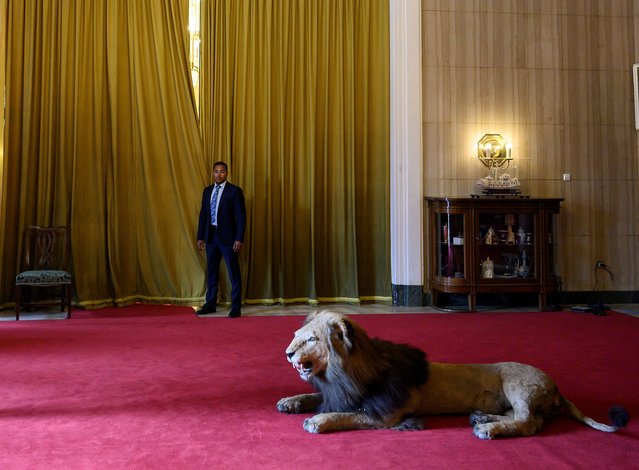 A security guard looks on as US Secretary of State Mike Pompeo meets with with Ethiopian President Sahle-Work Zewde at the Presidential Palace in Addis Ababa on February 18, 2020. (Photo by Andrew Caballero-Reynolds/Pool via AFP Photo) 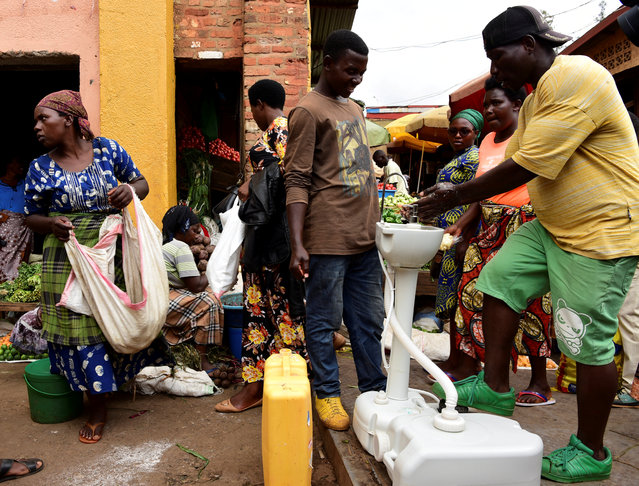 A man washes his hands at a public hand washing station before boarding a bus as a cautionary measure against the coronavirus at Nyabugogo Bus Park in Kigali, Rwanda on March 11, 2020. (Photo by Maggie Andresen/Reuters) 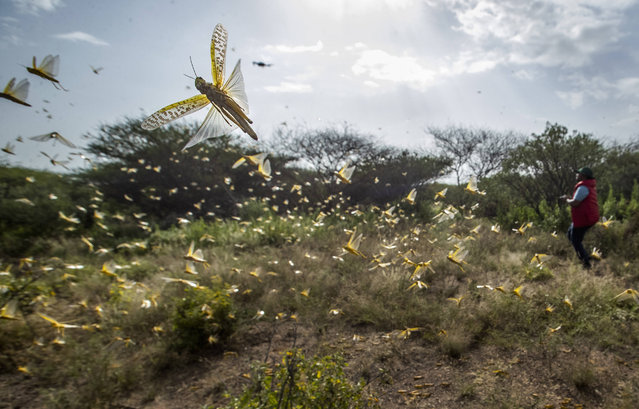 In this photo taken Saturday, February 1, 2020, desert locusts jump up from the ground and fly away as a cameraman walks past, in Nasuulu Conservancy, northern Kenya. As locusts by the billions descend on parts of Kenya in the worst outbreak in 70 years, small planes are flying low over affected areas to spray pesticides in what experts call the only effective control. (Photo by Ben Curtis/AP Photo) 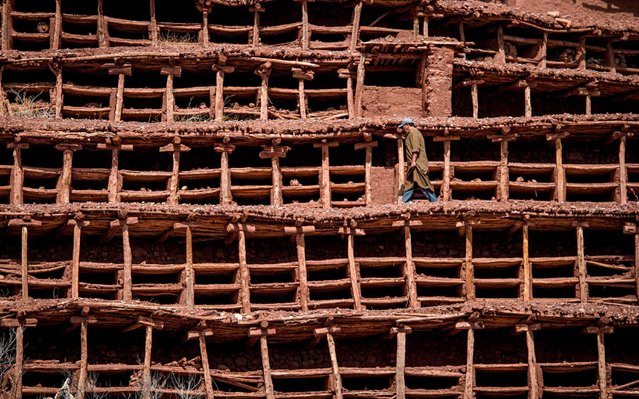 A beekeeper works at the Inzerki Apiary in the village of Inzerki, 82 km north of Agadir, in the Souss-Massa region of Morocco on February 26, 2020. (Photo by Fadel Senna/AFP Photo) 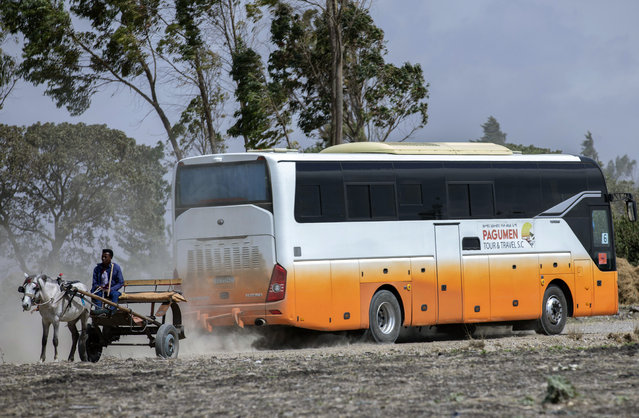 Relatives in buses arrive to attend the memorial service for the one-year anniversary of the crash of Ethiopian Airlines Flight ET302 in the rural Tulufera area near Bishoftu, south-east of the capital Addis Ababa, in Ethiopia Tuesday, March 10, 2020. Grim-faced, visibly grief-stricken, some crying, hundreds of family members gathered Tuesday for a memorial service at the site where one year ago the jet crashed into the rocky ground, killing all 157 on board. (Photo by Mulugeta Ayene/AP Photo)
Edit Del
26 Mar 2020 00:01:00, post received 0 comments
Publication archive:
←   →
Popular tags:
All tags
Last searches: