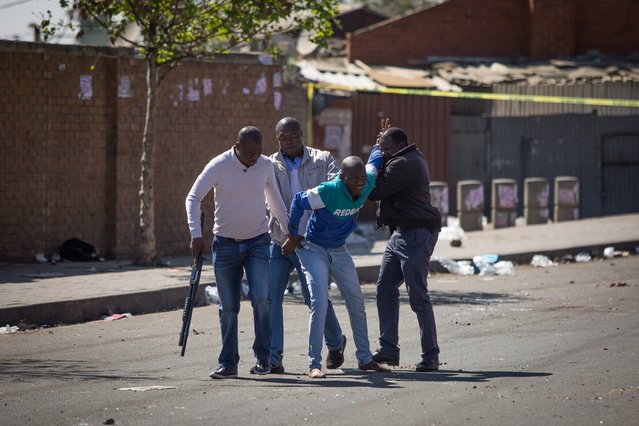 South African police officers detain a looter in the Johannesburg township of Alexandra on September 3, 2019 after South Africa's financial capital was hit by a new wave of anti-foreigner violence. The township was scene to a second night of urban rioting in Johannesburg, where hundreds of people marched through the streets on September 2 in an unusually large expression of anti-foreigner sentiment. Such violence breaks out sporadically in South Africa where many nationals blame immigrants for high unemployment, particularly in manual labour. (Photo by Guillem Sartorio/AFP Photo) 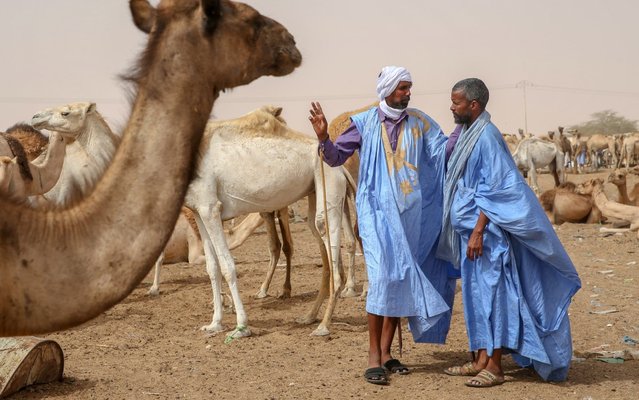 Stockbreeders are seen near sacrificial animals which were waited to be sold at Marbat Livestock Market after their value increased due to drought and exportation with Senegal and Mali during Eid al-Adha in Nouakchott, Mauritania on August 12, 2019. Muslims worldwide celebrate Eid Al-Adha, to commemorate the holy Prophet Ibrahim's (Prophet Abraham) readiness to sacrifice his son as a sign of his obedience to God, during which they sacrifice permissible animals, generally goats, sheep, and cows. Eid-al Adha is the one of two most important holidays in the Islamic calendar, with prayers and the ritual sacrifice of animals. (Photo by Ozkan Bilgin/Anadolu Agency via Getty Images) 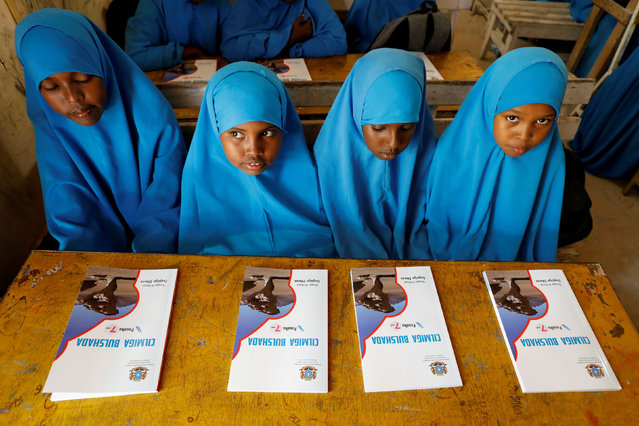 Primary school students use new textbooks during class at school that uses a new unified Somali curriculum, at Banadir zone school in Mogadishu, Somalia on September 22, 2019. (Photo by Feisal Omar/Reuters) 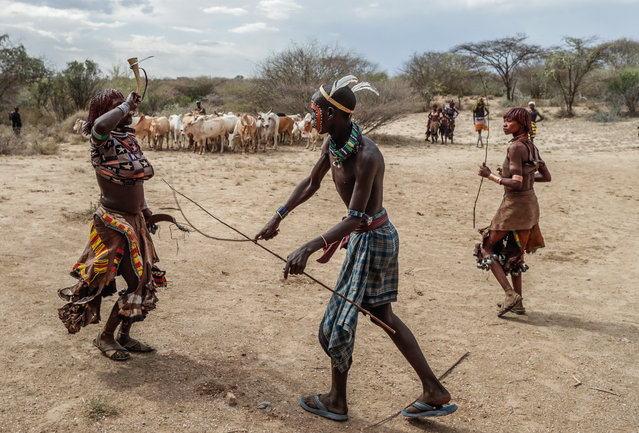 Female members of the Hammer tribe from the village of Turmi, situated in southern Ethiopia near the Kenyan border, accept a whipping by tribesmen as part of a ritual called the “bull jumping ceremony” that takes place during the passage of a young boy to adulthood, in Turmi, Ethiopia, 25 September 2019. The ceremony entails a young boy walking and jumping over seven bulls to become an adult while the tribe, who are mainly cattle ranchers, oversees the ceremony. The Hammer tradition wants women to have their hair coated with a mix of earth and butter that shall make them pretty while they dance during the ritual to give strenght to the young boy on his way to become an adult. In another part of the ceremony tribesmen with their faces painted whip women on demand to give courage to the adult initiate. (Photo by Stéphanie Lecocq/EPA/EFE) 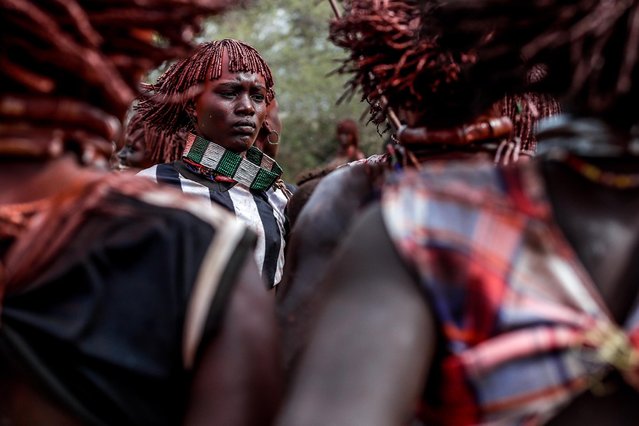 Female members of the Hammer tribe from the village of Turmi, situated in southern Ethiopia near the Kenyan border, dance as part of a ritual called the “bull jumping ceremony” that takes place during the passage of a young boy to adulthood, in Turmi, Ethiopia, 25 September 2019. (Photo by Stéphanie Lecocq/EPA/EFE) 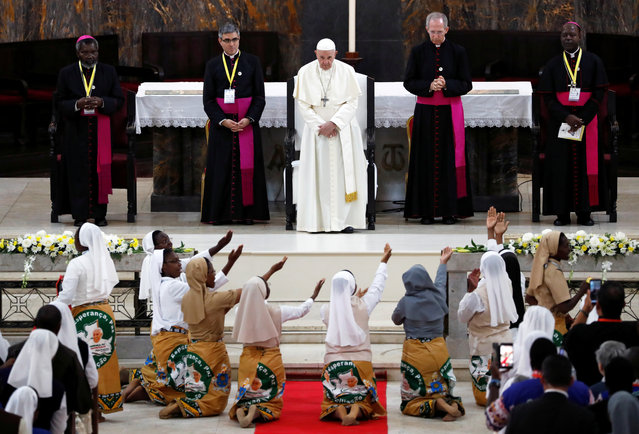 Pope Francis attends a meeting with clergy at the Cathedral of Our Lady of the Immaculate Conception in Maputo, Mozambique on September 5, 2019. (Photo by Yara Nardi/Reuters) 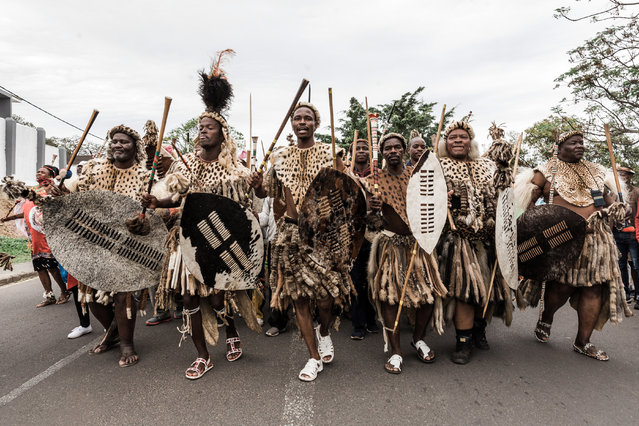 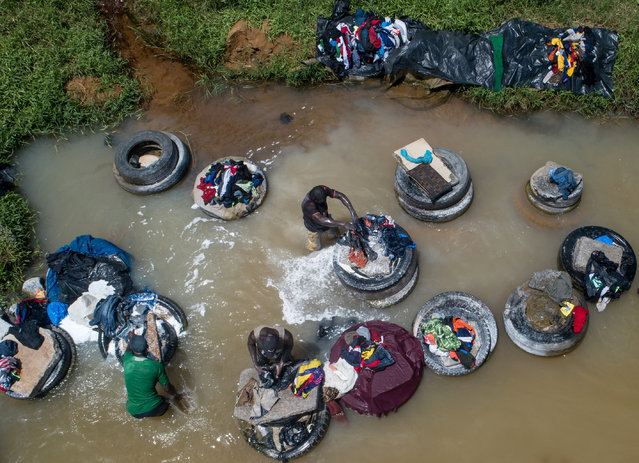 Laundrymen also called “Fanico” do other people's laundry at the stream in Banco National Park to earn their livings in Abidjan, Ivory Coast on August 20, 2019. (Photo by Mahmut Serdar Alaku/Anadolu Agency via Getty Images) 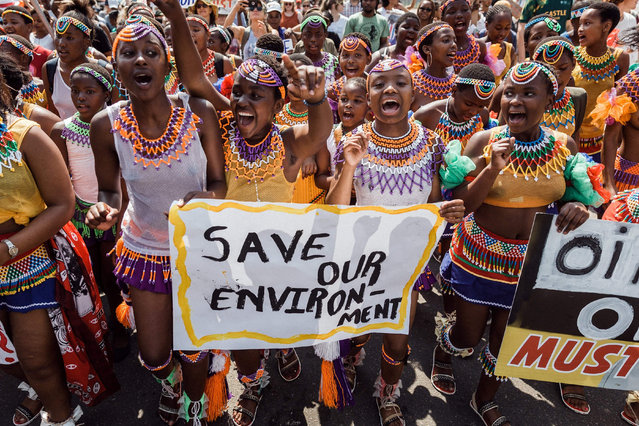 People take part in a protest for climate action on September 20, 2019 in Durban, South Africa, as part of a Global Climate action day. (Photo by Rajesh Jantilal/AFP Photo) 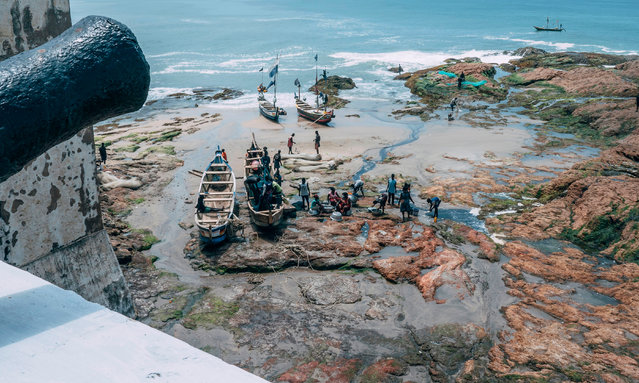 Fishermen tend to their boats on the shores of Cape Coast Castle, Ghana on August 18, 2019. African-American visitors are flocking to Ghana as it marks the “Year of Return” to remember the 400th anniversary of the first slave ship landing in Virginia. The West African nation is banking on the commemorations to give a major boost to the number of tourist arrivals as it encourages the descendants of slaves to “come home”. Cape Coast Castle, 150 kilometres (90 miles) from the capital Accra, is a major magnet for those visiting. The white-washed fort lined with cannons was one of dozens of prisons studding the Atlantic coast where slaves were held before their journey to the New World. (Photo by Natalija Gormalova/AFP Photo) 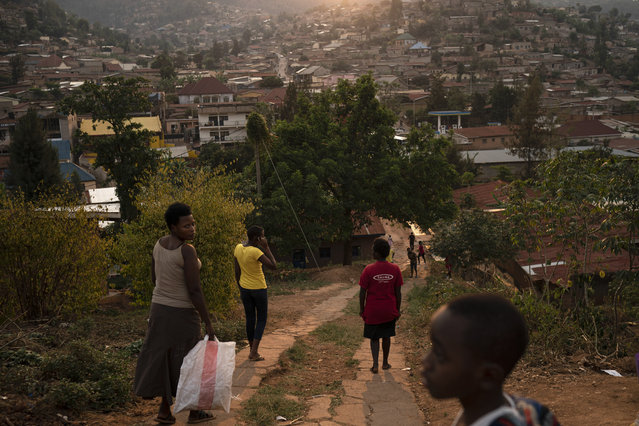 In this September 9, 2019 photo, people walk on a hilly street as the sun sets in Kigali, Rwanda. An estimated 60 million people in the world will die this year, and half will lack death certificates – and so have no recorded cause of death. Most will be in low- and middle-income countries, particularly in Africa and parts of Asia. (Photo by Felipe Dana/AP Photo) 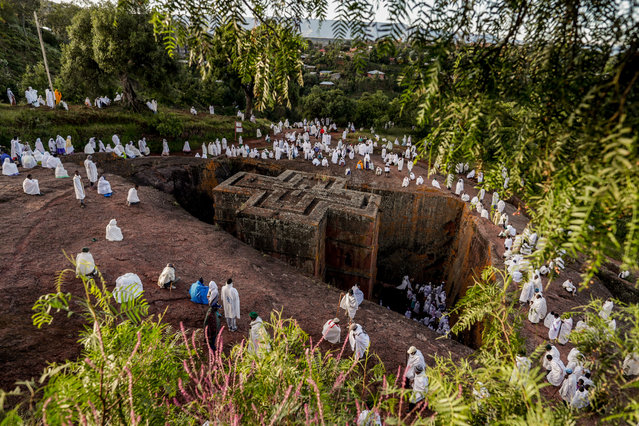 Ethiopian pilgrims gather at the Saint George (or Bet Giyorgis) Church during Saint George's festival in Lalibela, Ethiopia, 04 October 2019. The church of Saint George is one of eleven churches in Lalibela. The religious buildings were built at the height of medieval Ethiopian civilization from the ninth to the 12th century AD. The site of Lalibela is registered by UNESCO with the cultural inheritance of humanity since 1978. In order to protect the churches, roofs were installed above each of them except for the Church Saint Georges, which allows construction evacuation of water during heavy rains to minimize erosion. (Photo by Stéphanie Lecocq/EPA/EFE) 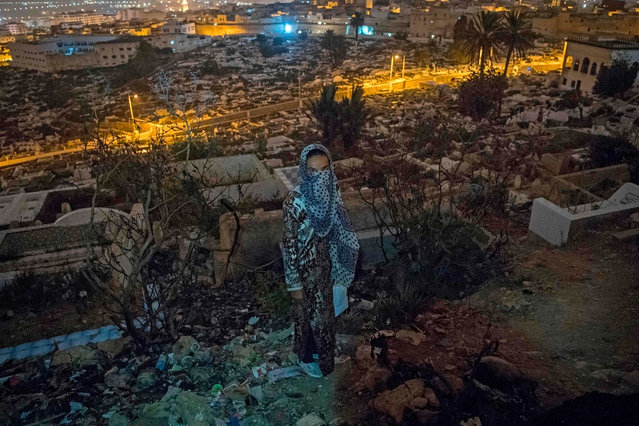 A Moroccan addict stands in a cemetery overlooking Tetouan, a common spot for addicts, in the Moroccan city of M'diq on September 14, 2019. In Morocco, known worldwide for its hashish produced in the Rif mountains, heroin use is a relatively recent development that is growing exponentially, according to experts. The sale and consumption of heroin are strictly prohibited in Morocco. (Photo by Fadel Senna/AFP Photo) 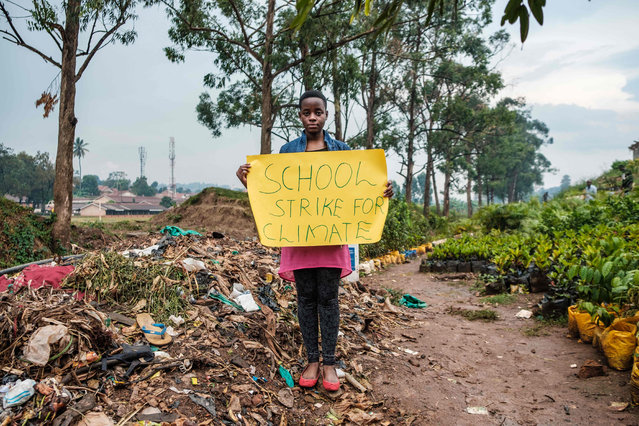 Leah Namugerwa, a 15 year-old climate activist, holds a placard in Kampala on September 4, 2019. Her activism includes striking around the city with a placard in order to raise awareness about climate change and the environment. She also misses out on school every Friday as a protest and has full support from her dad, Lukwago Cephas, who is also her manager. (Photo by Sumy Sadurni/AFP Photo) 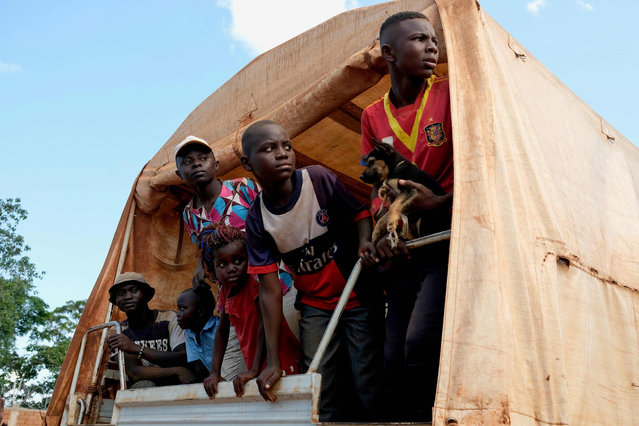 Central African refugees coming back after years in Congo-Brazzaville stand at the rear of a truck in Mongoumba, at the Congo-Brazzaville border, about 100 km south of Bangui on September 2, 2019. Since the overthrow of president Bozize's regime by the former Muslim rebel coalition, the Seleka, in 2013, nearly a quarter of the population has left the country. More than 600,000 Central African still leave in exile according to the UNHCR, AFP reports on September 3, 2019. (Photo by Camille Laffont/AFP Photo) 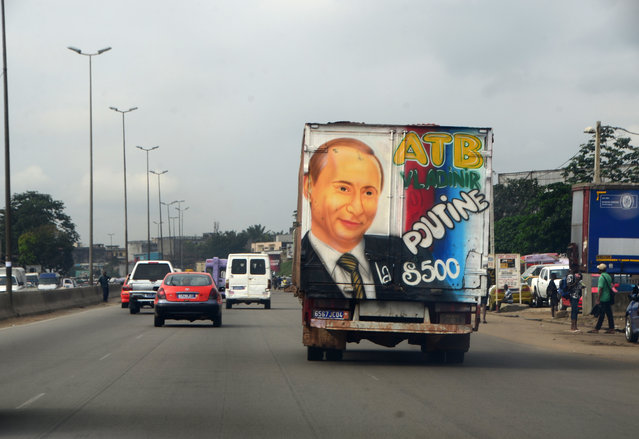 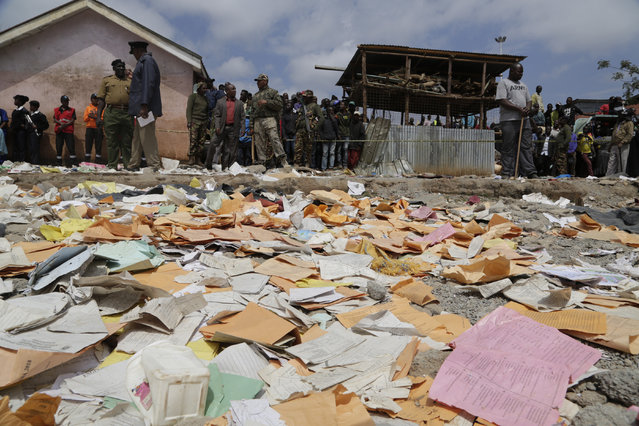 School papers lie on the ground as people gather at the site of the Precious Talent Top School building after it collapsed in Nairobi, Kenya, Monday, September 23, 2019. A school collapsed in Kenya's capital on Monday and killed at least seven children, officials said, while some outraged residents alleged shoddy construction.(Photo by Khalil Senosi/AP Photo) 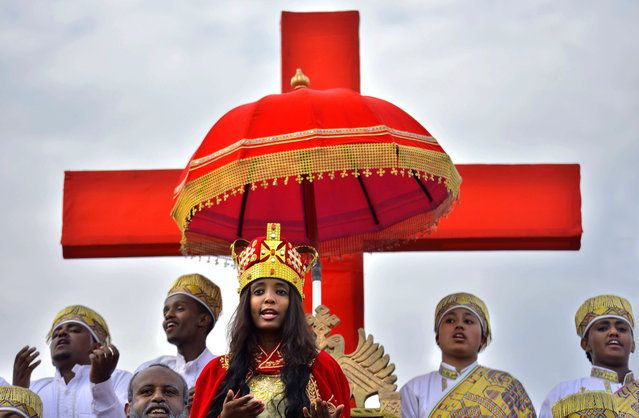 Believers chant during the Meskel celebrations, a religious holiday held by the Ethiopian Orthodox Church in Addis Ababa, Ethiopia on September 27, 2019. Meskel marks the finding by Saint Helena of the “true cross” on which Jesus was crucified. It began on September 27 afternoon with Demera, a ceremony that drew tens of thousands of people to central Addis Ababa, the capital, for hours of dancing, chanting, drumming and prayer. (Photo by Michael Tewelde/AFP Photo) 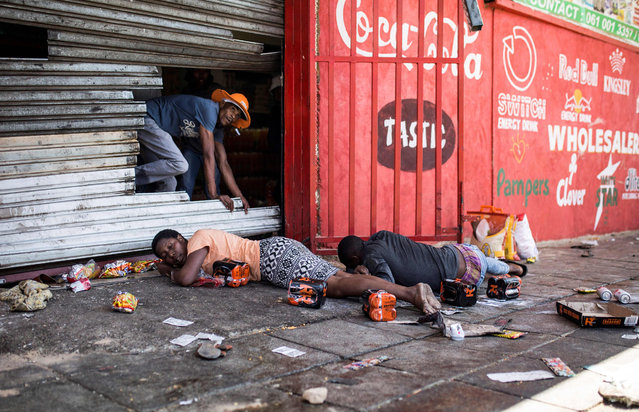