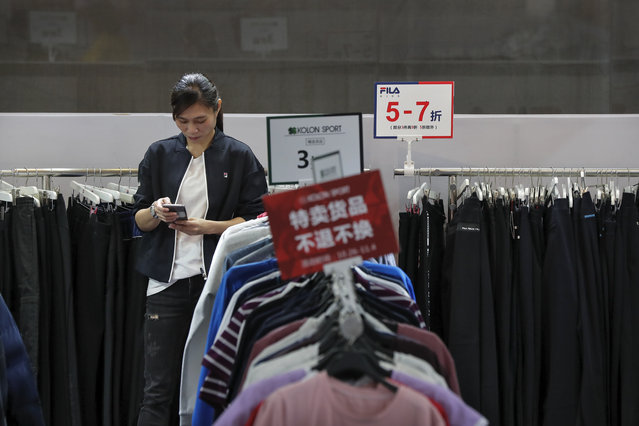 In this November 1, 2019, file photo, an employee browses her smartphone at a clothing store having a promotion sale at a shopping mall in Shenzhen, China's Guangdong province. China has raised its estimate of the size of its economy by 2.1% following a census, raising its gross domestic product for 2018 to 91.93 trillion yuan ($13.1 trillion), the National Bureau of Statistics said Frida, Nov. 22, 2019. (Photo by Andy Wong/AP Photo/File) 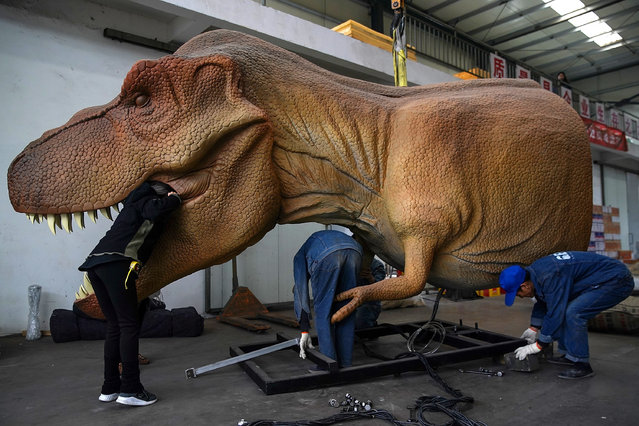 Chinese workers maintain an Animatronic Dinosaurs at Gengu Dinosaurs Science and Technology company on November 13, 2019 in Zigong, Sichuan Province, China. There are hundreds of simulated dinosaur manufacturers in Zigong City. It is the largest simulated dinosaur manufacturing in China. It accounts for 95% of mainland China's production and 85% of the world's total. Its products are exported to more than 100 countries. (Photo by Lintao Zhang/Getty Images) 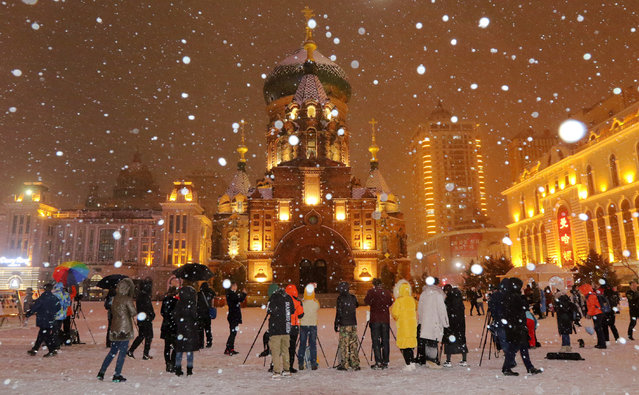 People take photos of Saint Sophia Cathedral in the first snow after the start of winter on November 12, 2019 in Harbin, Heilongjiang Province of China. (Photo by VCG/VCG via Getty Images) 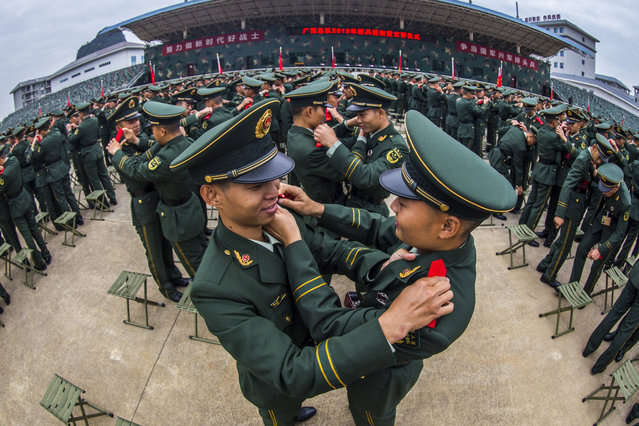 New recruits of the armed police at a swearing-in ceremony in Guangxi, China on November 20, 2019. (Photo by Costfoto/Barcroft Media) 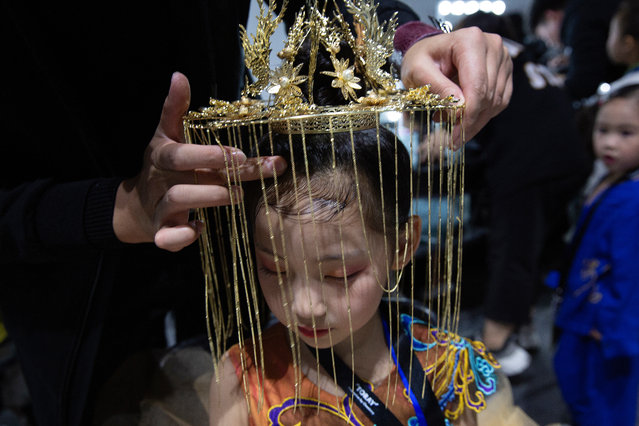 Chinese child model Chen Ruoxi has a head dress put on backstage before the brand Van Monfe show during the China Fashion Week Kids Fashion segment in Beijing, China, 01 November 2019. More than 60 children and their parents gathered at the 751 Tank venue for a rehearsal of the runway show for children fashion brand Van Monfe. It is just one of the 35 shows dedicated to kids fashion during the China Fashion Week running from 25 October to 02 November 2019. (Photo by How Hwee Young/EPA/EFE) 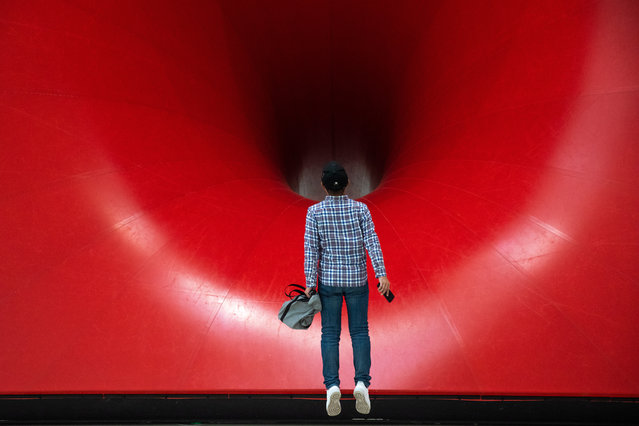 A visitor jumps to look at “Sectional Body preparing for Monadic Singularity” artwork during an exhibition of British-Indian artist Anish Kapoor, at the CAFA Art Museum, in Beijing, China, 19 November 2019. The first solo museum show in China for Anish Kapoor presents his most significant works and runs until 01 January 2020. (Photo by Roman Pilipey/EPA/EFE) 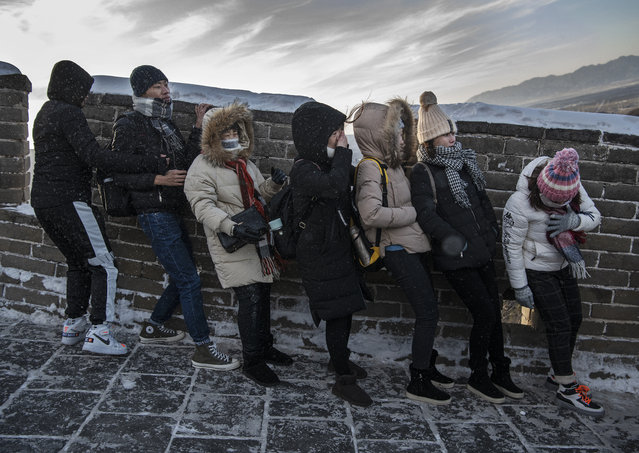 Chinese tourists struggle to walk down in heavy wind on an icy section of the Great Wall at Badaling, on a cold day after a snowfall on November 30, 2019 in Beijing, China. (Photo by Kevin Frayer/Getty Images) 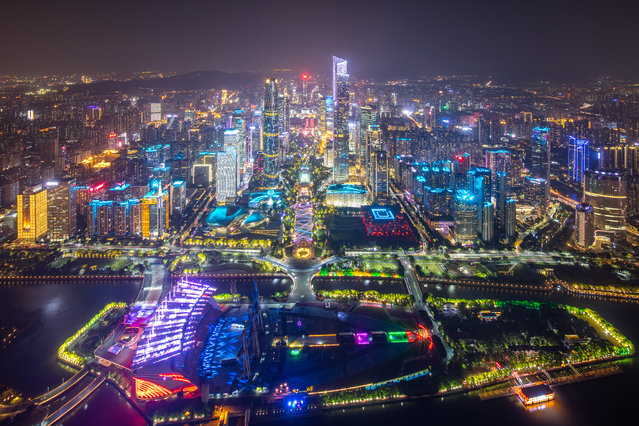 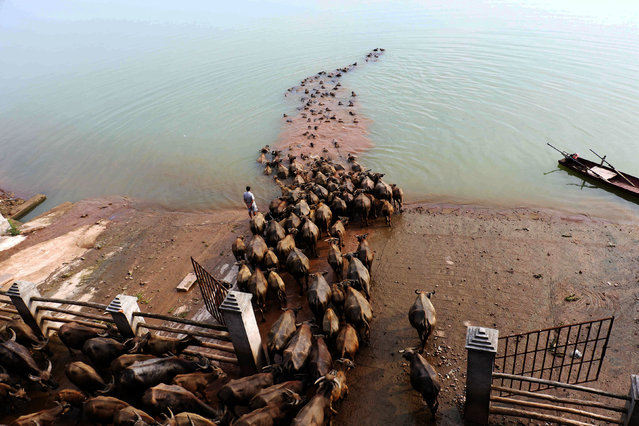 A man watches buffalos cross a river as they head to another grazing area, in Nanchong, Sichuan province, China, August 10, 2016. (Photo by Reuters/China Daily) 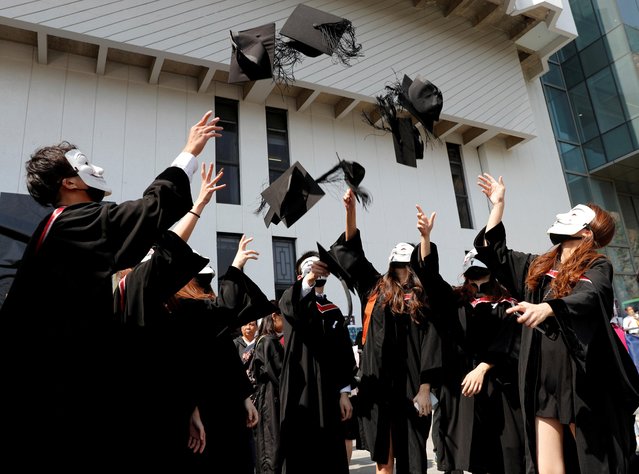 Graduates wearing Guy Fawkes masks throw their hats as they pose for their photo after a graduation ceremony at the Chinese University of Hong Kong in Hong Kong, China, November 7, 2019. (Photo by Kim Kyung-Hoon/Reuters) 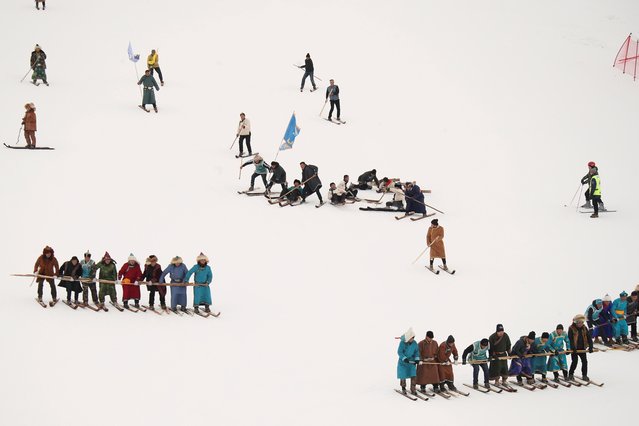 People perform on traditional horsehide skis during an event to celebrate the origins of skiing at the Jiangjunshan, or General's Mountain ski resort in Altay, Xinjiang Uighur Autonomous Region, China on November 27, 2019. (Photo by Reuters/China Stringer Network) 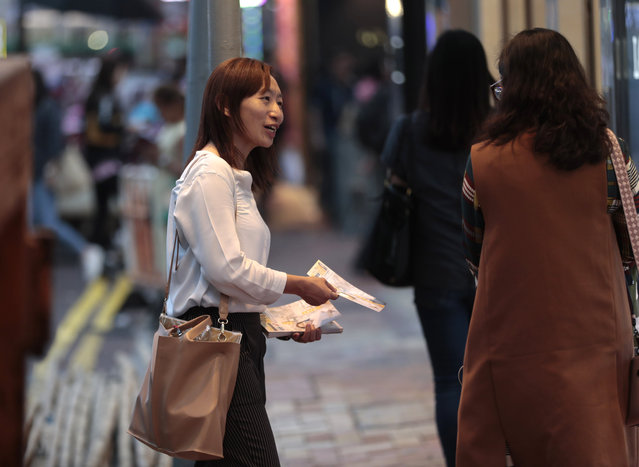 In this photo taken Thursday, November 7, 2019, district council candidate Cathy Yau distributes flyers to pedestrians during her campaign at Causeway Bay in Hong Kong. Yau, a former police officer, grew exasperated as police used more force to quell the unrest. She quit the force in July after 11 years and is running in Sunday's district polls that are widely expected to deliver a decisive victory for the six-month-old movement seeking democratic reforms in the semi-autonomous Chinese territory. (Photo by Dita Alangkara/AP Photo) 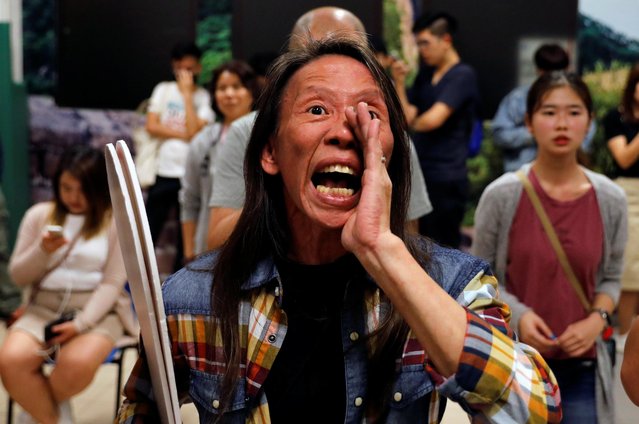 A woman reacts during the counting of the votes of the Hong Kong council elections, in a polling station in Hong Kong, China on November 25, 2019. (Photo by Adnan Abidi/Reuters) 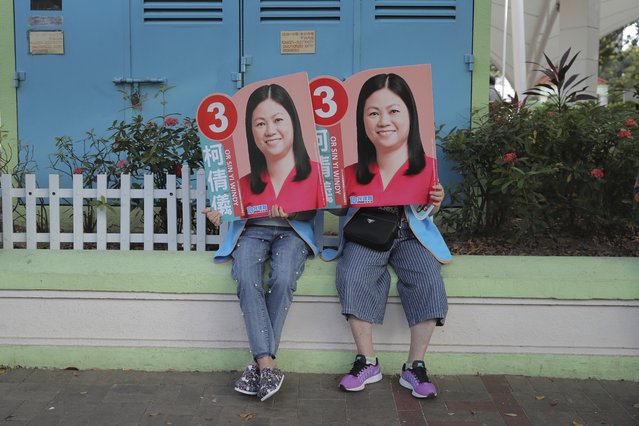 Supporters of pro China candidate Or Sin-yi Windy hold her promotional placards in Hong Kong, Sunday, November 24, 2019. Long lines snaked around plazas and extended for blocks as citizens of the semi-autonomous Chinese territory turned out in droves Sunday for an election seen as a test of public support for anti-government protests that have persisted for more than five months. (Photo by Kin Cheung/AP Photo) 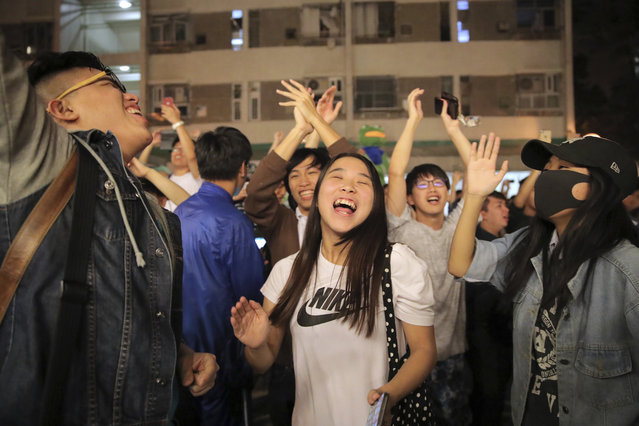 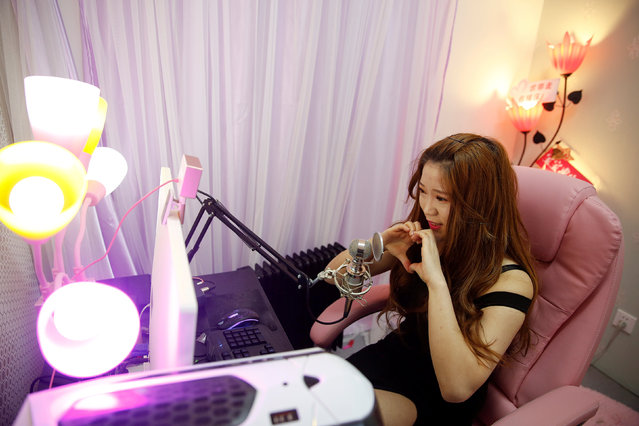 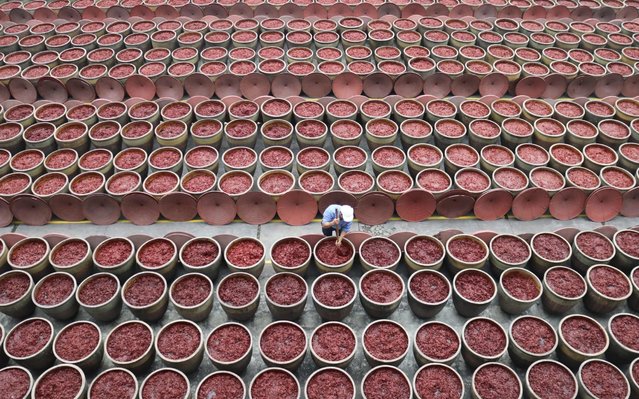 A worker dries bean sauce stored in vats at a factory on November 16, 2019 in Chengdu, Sichuan Province of China. (Photo by Zhang Lang/China News Service/VCG via Getty Images) 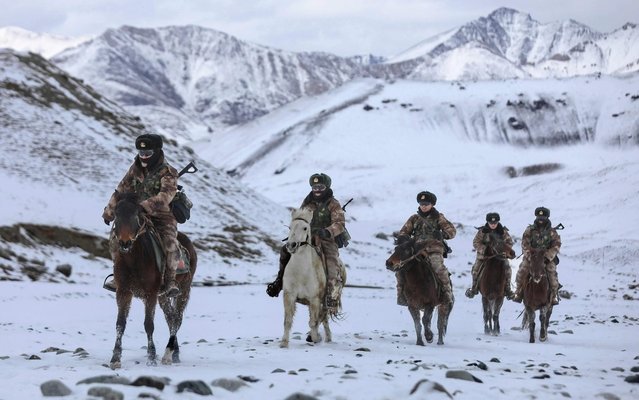 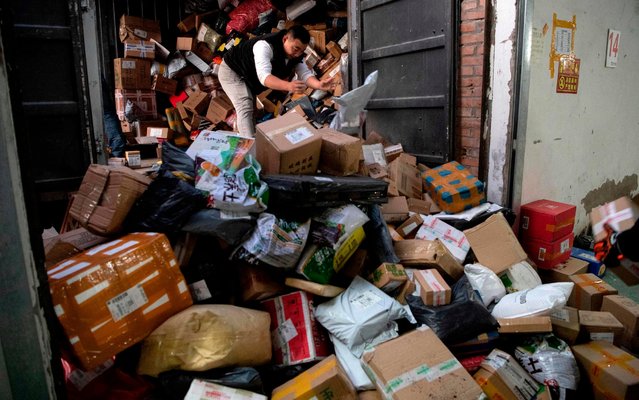 A worker sorts out packages at a delivery company warehouse to be delivered to customers during “Singles' Day” – the world's biggest 24-hour shopping event – in Beijing on November 11, 2019. Chinese consumers closed in on a new spending record November 11 during the annual “Singles' Day” frenzy, the world's biggest 24-hour shopping event, which kicked off this year with a glitzy show by US megastar Taylor Swift. (Photo by Noel Celis/AFP Photo) 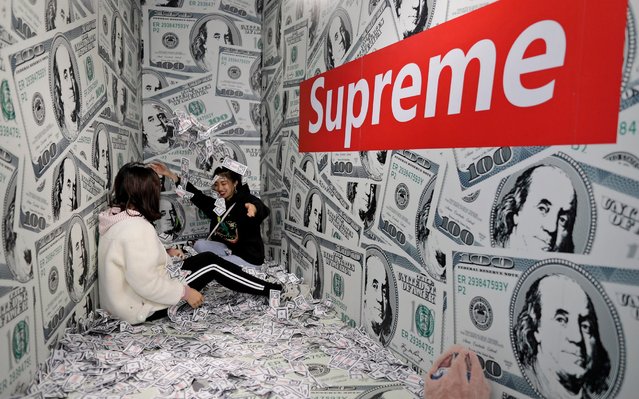 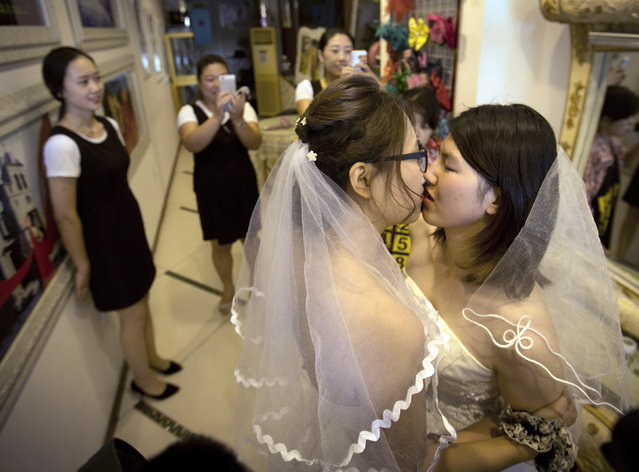 In this July 2, 2015, file photo, Teresa Xu, left, and Li Tingting, right, share a kiss as clerks take photographs in a beauty salon where the two were preparing for their wedding in Beijing. LGBT activists in China are seeking to legalize same-s*x marriage through a novel tactic: submitting opinions on a draft new civil code to the country’s legislature. (Photo by Mark Schiefelbein/AP Photo/File)
Edit Del
03 Dec 2019 00:01:00, post received 0 comments
Publication archive:
←   →
Popular tags:
All tags
Last searches: