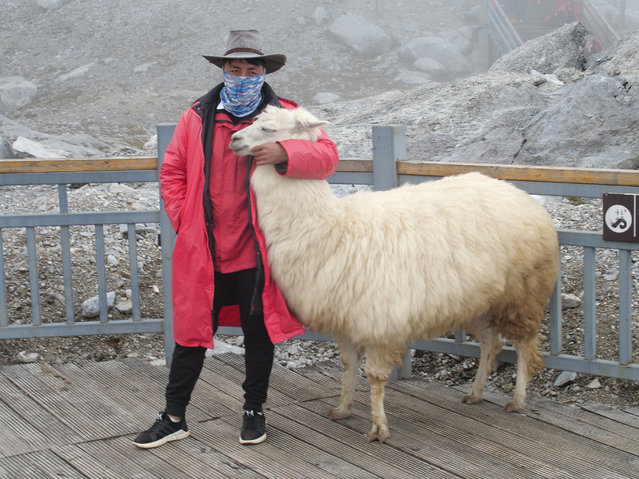 This September 21, 2018 photo shows a tourist posing with a yak atop the Baishui Glacier No.1 on the Jade Dragon Snow Mountain in the southern province of Yunnan in China. About 2.6 million visitors come every year to see the glacier which scientists say is one of the fastest melting glaciers in the world due to climate change and its relative proximity to the Equator. (Photo by Sam McNeil/AP Photo) 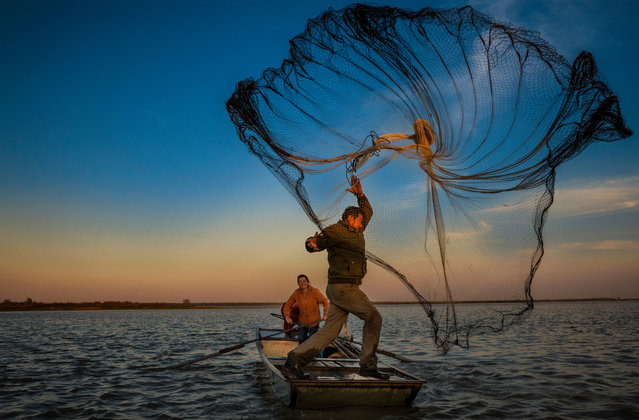 A fisherman throws a net for catching fish with his wife in Yanhu fisherman village near Yangzhou, Jiangsu province, China, 18 October 2018. (Photo by Aleksandar Plavevski/EPA/EFE) 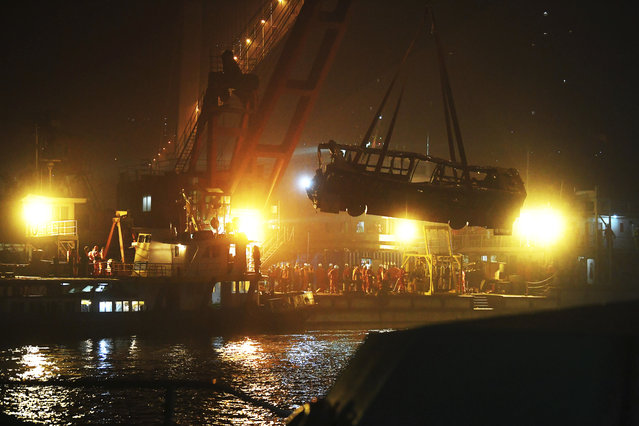 In this Oct. 31, 2018, file photo released by China's Xinhua News Agency, a bus is lifted out of the Yangtze River by a floating crane in Wanzhou in southwestern China's Chongqing Municipality. Police said on Friday, Nov. 2, 2018, a brawl between a passenger and a bus driver was the cause of the bus plunging off a bridge and killing more than a dozen people in southwestern China on Sunday. (Photo by Wang Quanchao/Xinhua via AP Photo) 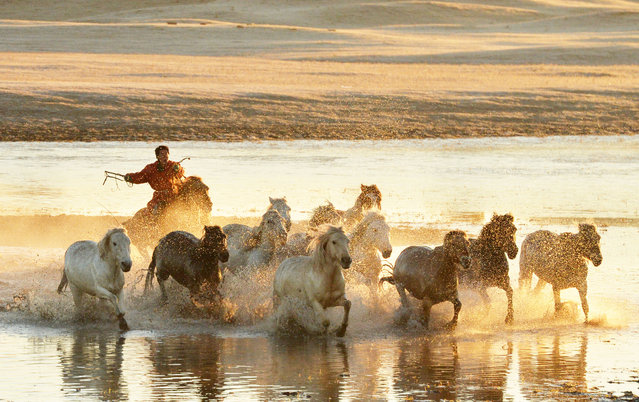 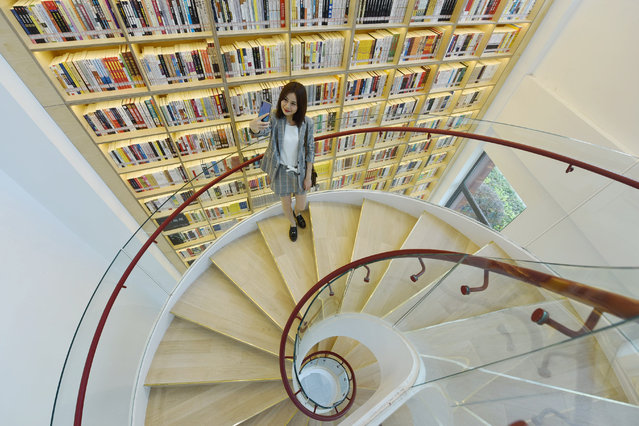 A reader takes a selfie on the opening of the Snail library in Hangzhou, Zhejiang, China on October 25, 2018. The library aims to offer readers online resources alongside traditional library and services. (Photo by Costfoto/Barcroft Images) 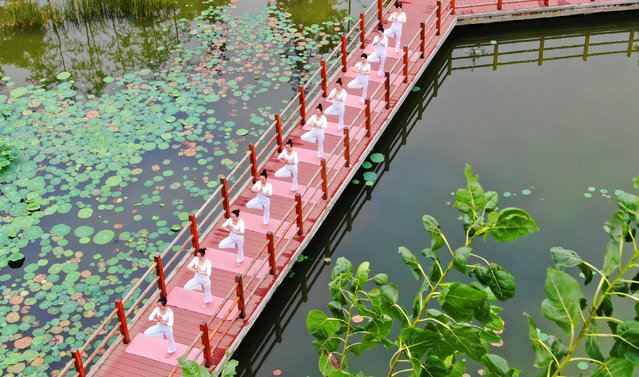 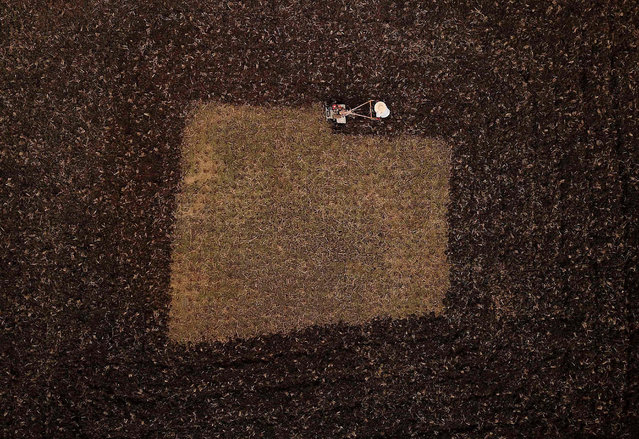 This aerial photo taken on October 8, 2018 shows a farmer ploughing along a field in Danzhai in China' s southwestern Guizhou province. (Photo by AFP Photo/Stringer) 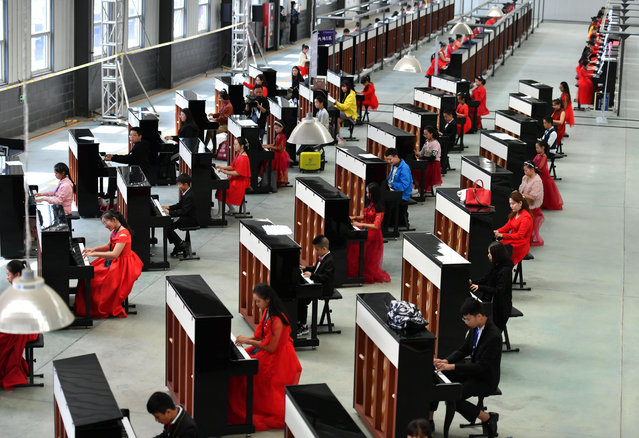 Participants play pianos together to set a Guinness World Record for the most pianos played at the same time at Wuqiang County on October 6, 2018 in Hengshui, Hebei Province of China. 666 pianos were played together in the challenge in Hengshui on Saturday. (Photo by Zhai Yujia/China News Service/VCG via Getty Images) 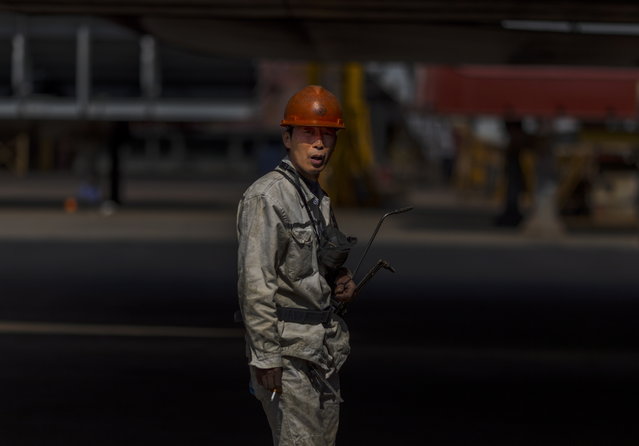 A workers walks in the Yangzijiang Shipbuilding Group shipyard, a privately owned large-scale enterprise integrating shipbuilding and marine engineering manufacturing in Jiangyin, Jiangsu province, China, 18 October 2018. The company is second biggest in the world for cargo ships after South Korea, by ship orders and numbers of ships made during one year. China's economy grew slower than expected at 6.5 percent year-over-year in the quarter that ended in September, according to data announced by the National Bureau of Statistics on 19 October 2018. The latest Gross Domestic Product (GDP) figures missed expectations, indicating the the world's second largest economy is feeling the impact of its trade war with the US. (Photo by Aleksandar Plavevski/EPA/EFE) 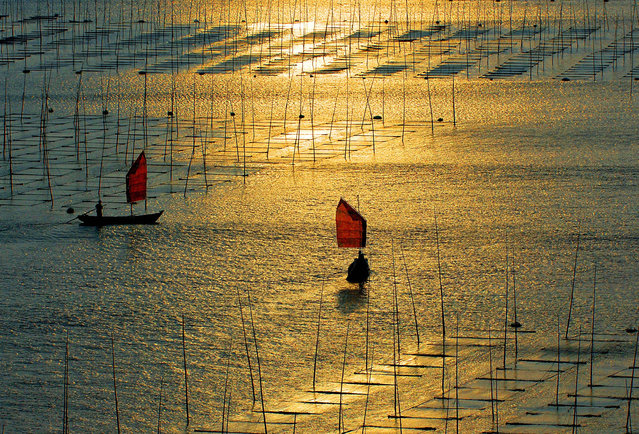 People work at a laver (seaweed) cultivation base in Xiapu county, Fujian province, China on October 25, 2018. (Photo by Xinhua/Barcroft Images) 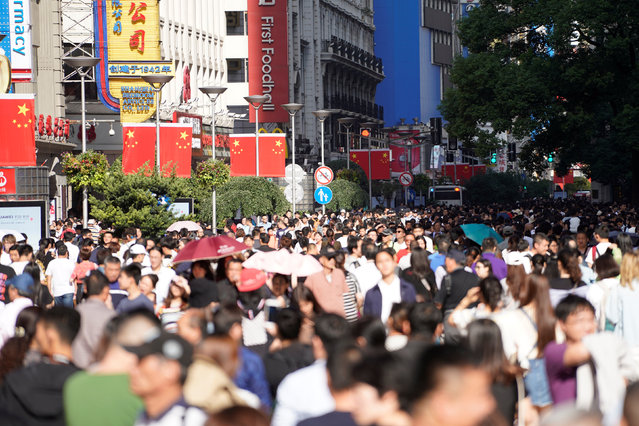 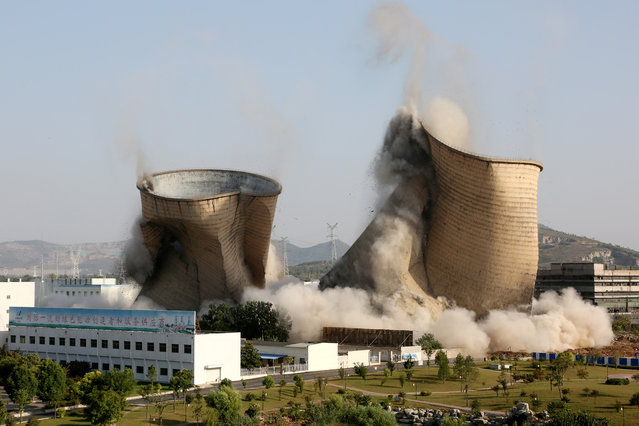 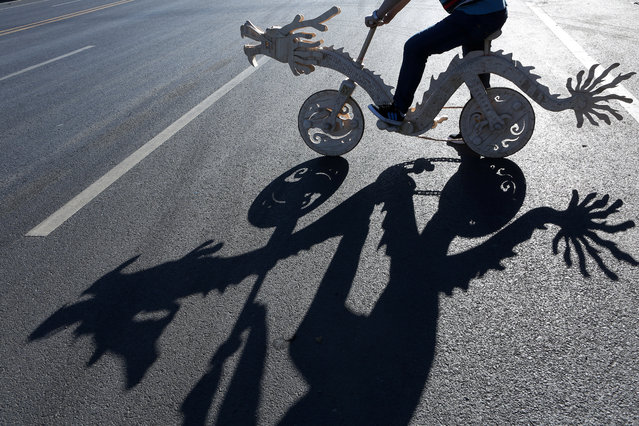 Sun Chao rides on a dragon-shaped bicycle he made with ice-cream sticks, in Tieling, Liaoning province, China on October 17, 2018. (Photo by Reuters/China Stringer Network) 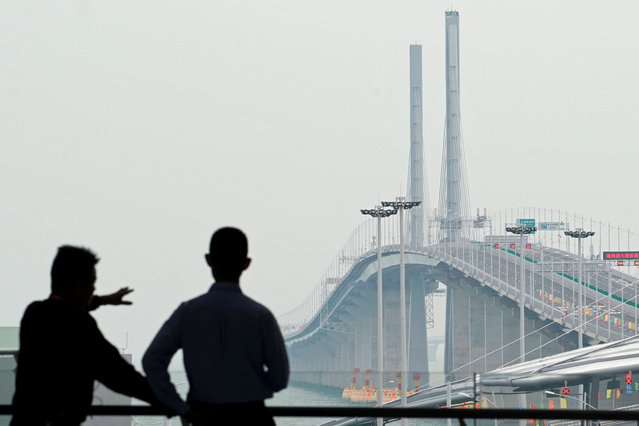 A general view of the Hong Kong-Zhuhai-Macau bridge after its opening ceremony in Zhuhai, China October 23, 2018. (Photo by Aly Song/Reuters) 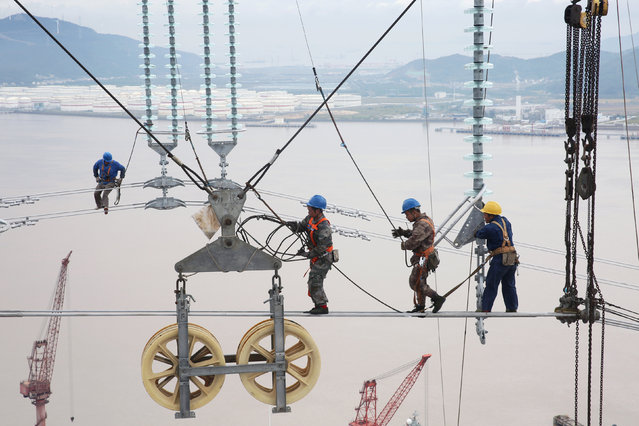 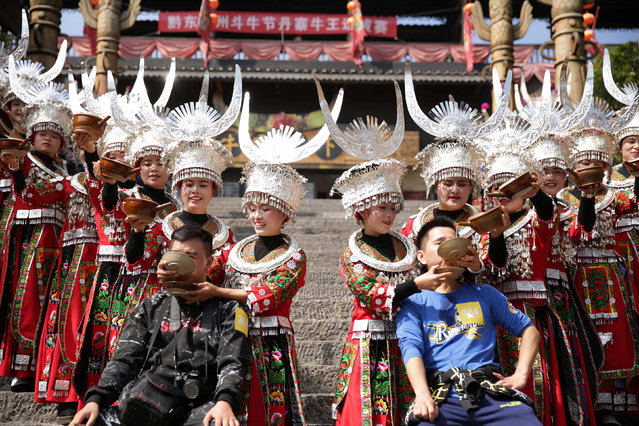 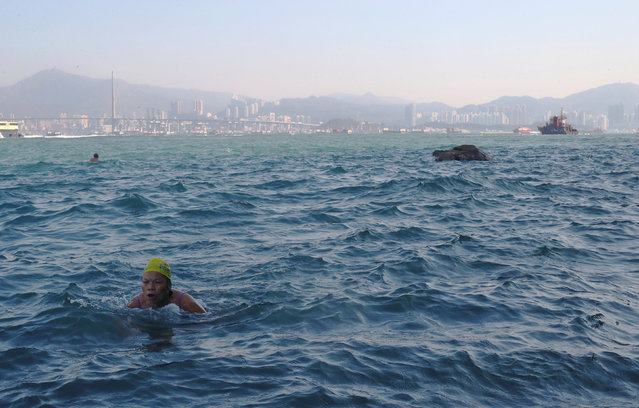 Miao Rong Lu, 68, swims in the sea at the Sai Wan Swimming Shed in Hong Kong, China, October 5, 2018. Rong Lu said she has been coming to the swimming shed for 30 years. (Photo by Hannah McKay/Reuters) 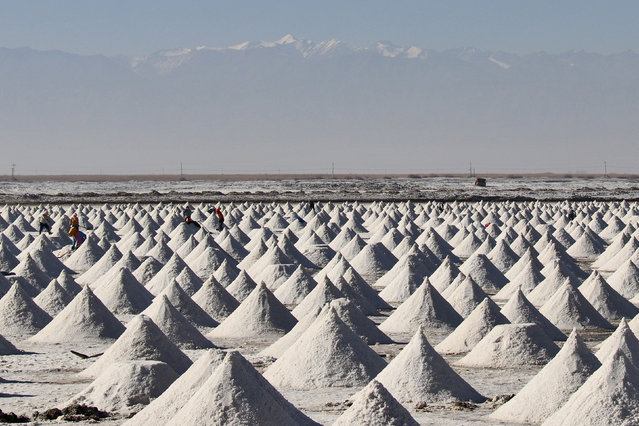 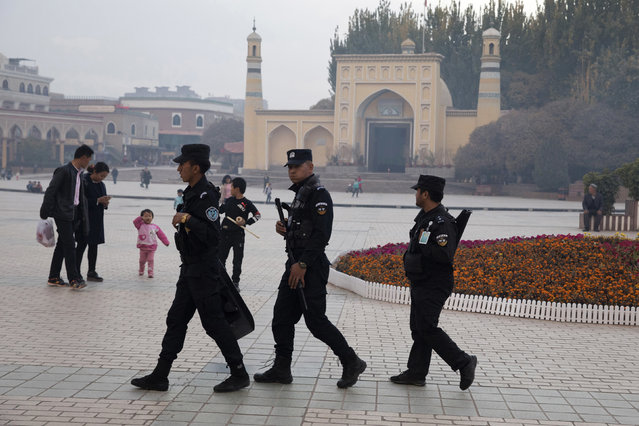 In this November 4, 2017 file photo, Uighur security personnel patrol near the Id Kah Mosque in Kashgar in western China's Xinjiang region. China's northwestern region of Xinjiang has revised legislation to allow the detention of suspected extremists in “education and training centers”. The revisions come amid rising international concern over a harsh crackdown in Xinjiang that has led to as many as 1 million of China's Uighurs and other Muslim minorities being held in internment camps. (Photo by Ng Han Guan/AP Photo) 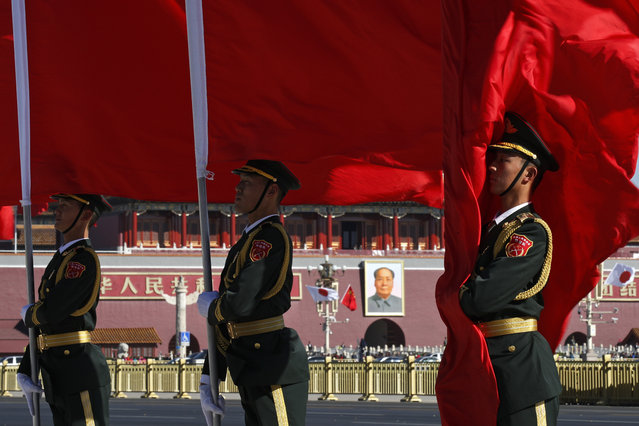 Members of an honor guard hold flags as they wait for the arrival of visiting Japanese Prime Minister Shinzo Abe during a welcome ceremony outside the Great Hall of the People in Beijing, Friday, October 26, 2018. (Photo by Andy Wong/AP Photo) 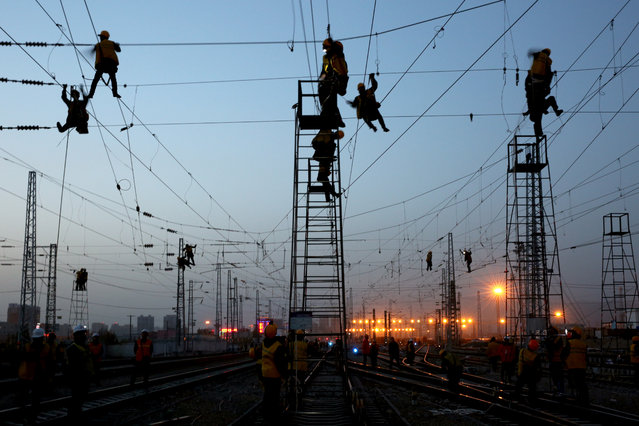 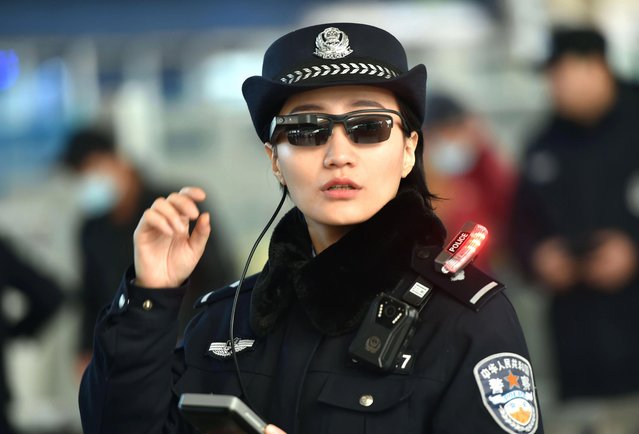