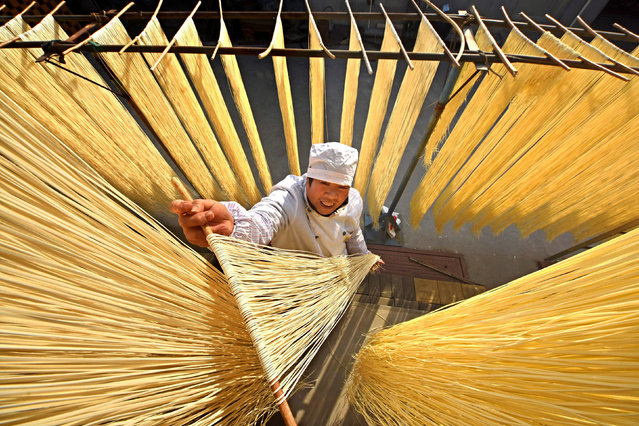 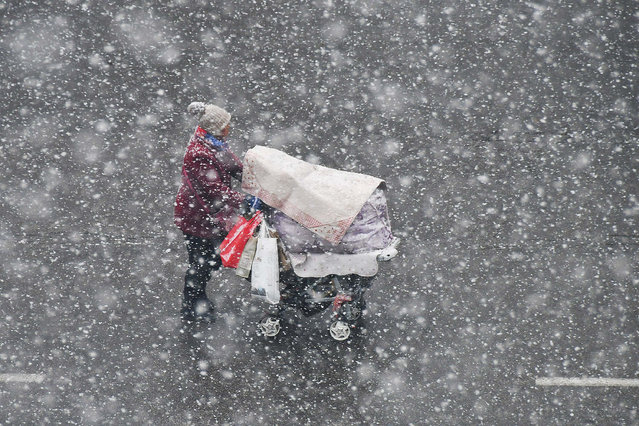 A woman pushing a stroller walks in the snow in Yantai, Shandong province, China December 4, 2017. (Photo by Reuters/China Daily) 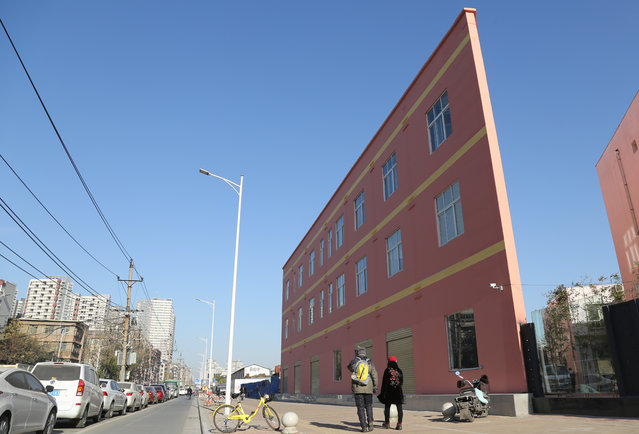 A view of a trianglular building which looks as thin as just a wall from certain angles in Zhengzhou in central China's Henan province Wednesday December 06, 2017. (Photo by Feature China/Barcroft Images) 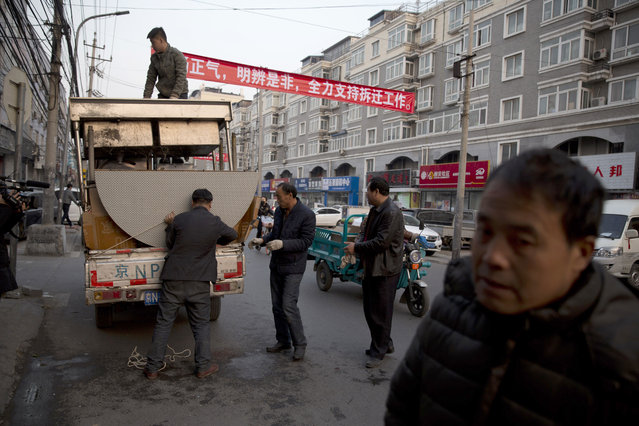 Workers load kitchen equipment near propaganda slogans at left that read: “Carry forward righteousness, Differentiate right and wrong, Fully support eviction work” onto a truck from a restaurant that's closed by the eviction in the outskirts of Beijing Monday, November 27, 2017. Authorities in Beijing have been evicting domestic migrant workers from the capital in droves, triggering a public outcry over the harsh treatment of people the city depends on to build their skyscrapers, care for their children and take on other lowly-paid work. (Photo by Ng Han Guan/AP Photo) 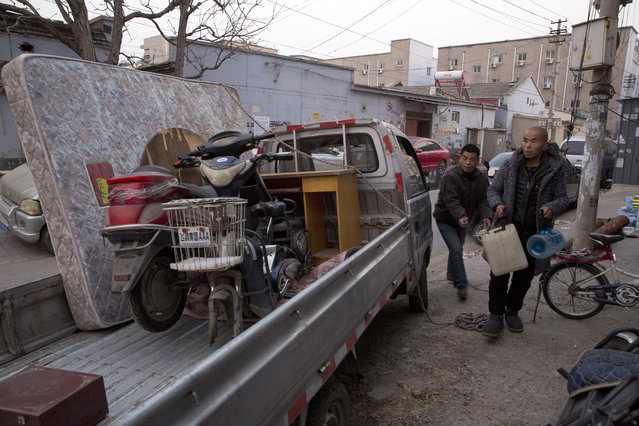 Migrant workers pack their belongings onto a truck as they leave from the outskirts of Beijing Monday, November 27, 2017. (Photo by Ng Han Guan/AP Photo) 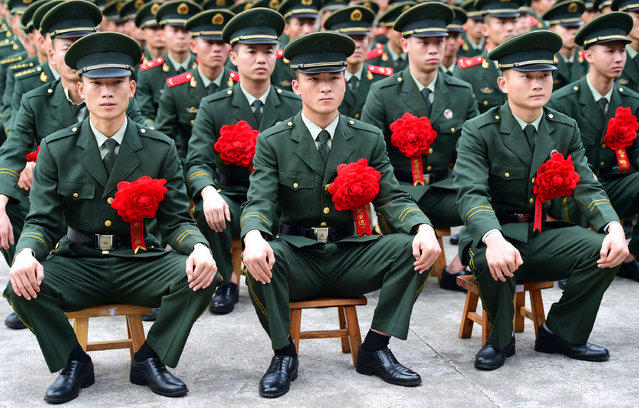 Armed soldiers attend military discharge ceremony on November 30, 2017 in Shenzhen, Guangdong Province of China. Over 100 veterans discharged from military service bid farewell to their comrades and left the army. (Photo by VCG/VCG via Getty Images) 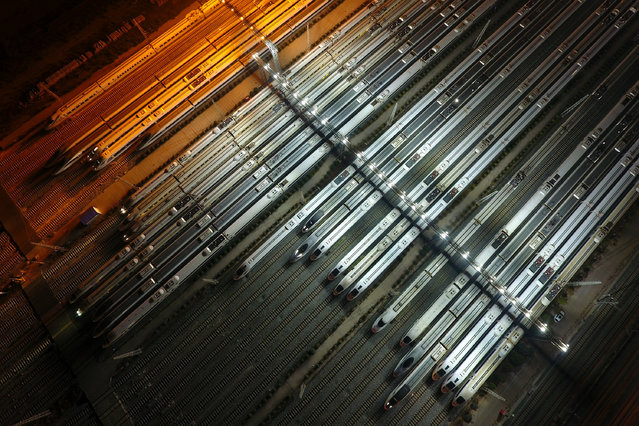 Aerial view of bullet trains to operate on the Xi'an-Chengdu High-Speed Railway at a station on December 5, 2017 in Xi'an, Shaanxi Province of China. High-speed trains linking Xi'an and Chengdu will begin operating on December 6, which will run at a designed speed of 250 km per hour. (Photo by VCG/VCG via Getty Images) 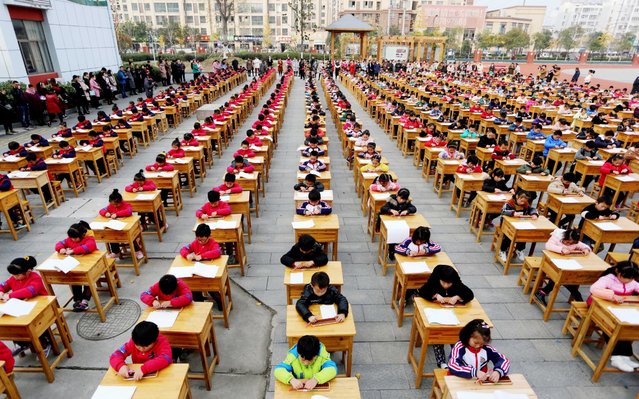 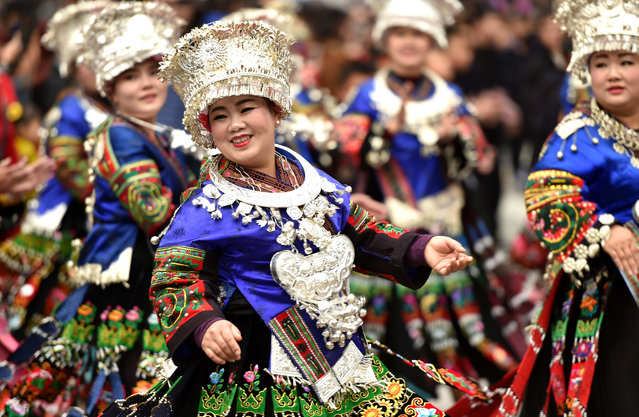 Chinese people of Miao ethnic minority dressed in traditional silver-decorated clothes and headwears take part in a parade to celebrate their traditional New Year Festival in Leishan county, Qiandongnan Miao and Dong Autonomous Prefecture, southwest China's Guizhou province on November 23, 2017. It falls during the tenth month of the lunar calendar (late October or November). This is the most important festival for the Miao ethnic group. It symbolizes the start of something new and fruitful. (Photo by Imaginechina/Rex Features/Shutterstock) 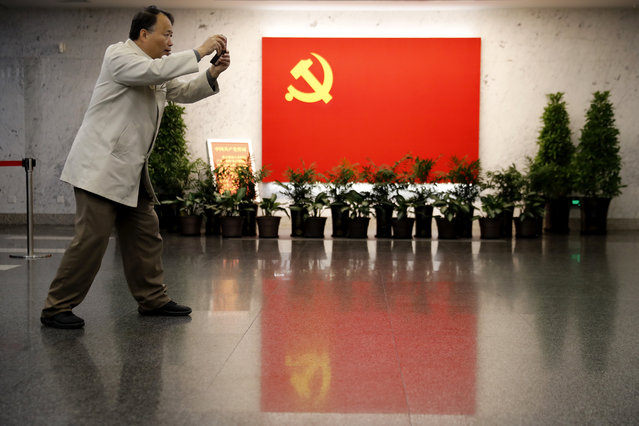 A man takes a smartphone photo near a Communist flag on display at the museum of the first National Congress of the Communist Party of China in Shanghai, China, Sunday, November 19, 2017. Chinese tourists and visitors have flocked to the museum in Shanghai since President Xi Jinping made a visit with the newly-installed line-up of top party leaders late last month. During the leaders' visit, they were depicted on state television reaffirming their party oaths with their fists raised. (Photo by Andy Wong/AP Photo) 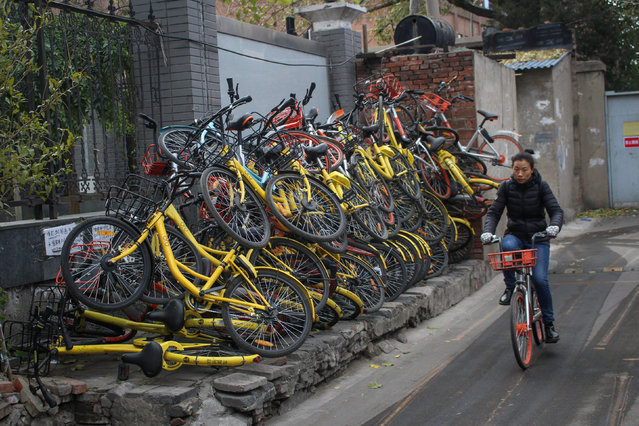 A woman rides a bicycle past shared bikes at a hutong in Beijing, China November 17, 2017. (Photo by Reuters/China Stringer Network) 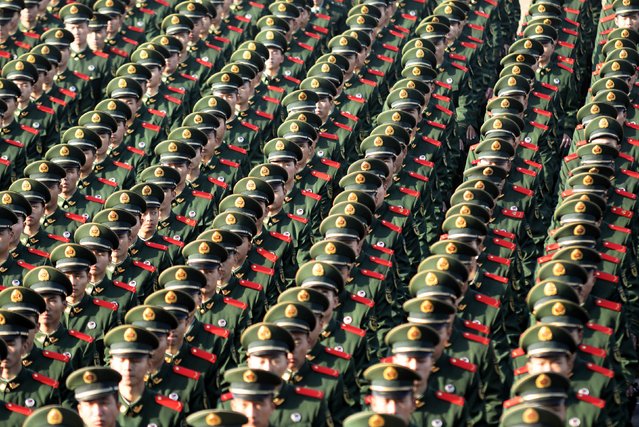 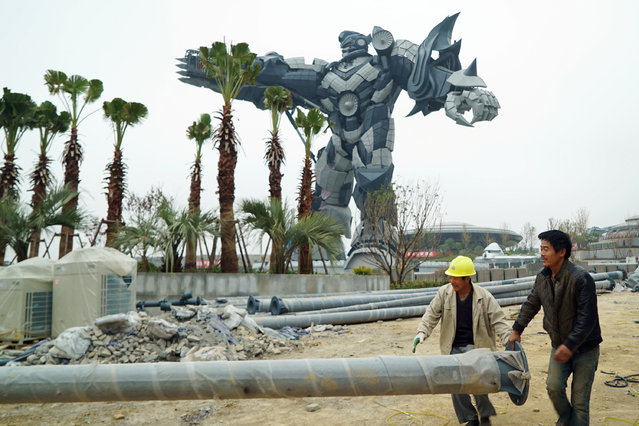 Construction workers carry a light pole in front of a giant robot statue in Guiyang, Guizhou province, China on November 24, 2017. In the push to become a center of innovative tech, Guizhou is luring firms such as Apple Inc, which has sited its China data center there, while the world's largest radio telescope is in nearby Pingtang county. (Photo by Joseph Campbell/Reuters) 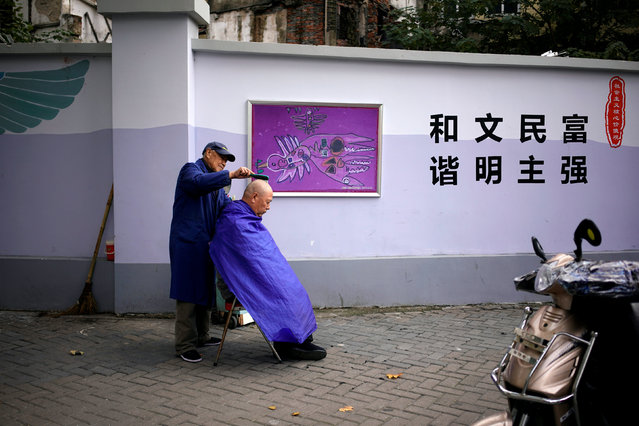 A resident gets a haircut by the roadside in Shanghai, China November 27, 2017. (Photo by Aly Song/Reuters) 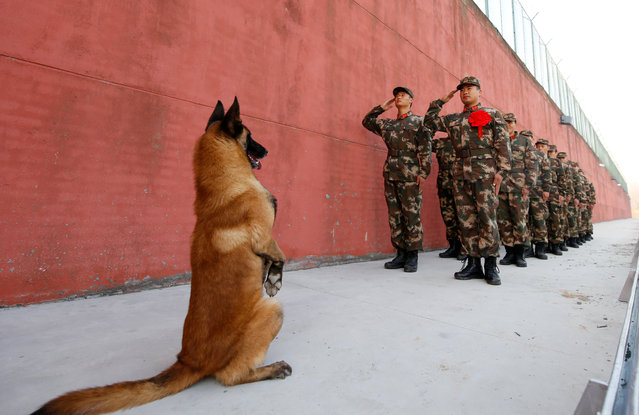 An army dog stands up as retiring soldiers salute their guard post before retirement in Suqian, Jiangsu province, China on November 29, 2017. (Photo by Reuters/China Stringer Network) 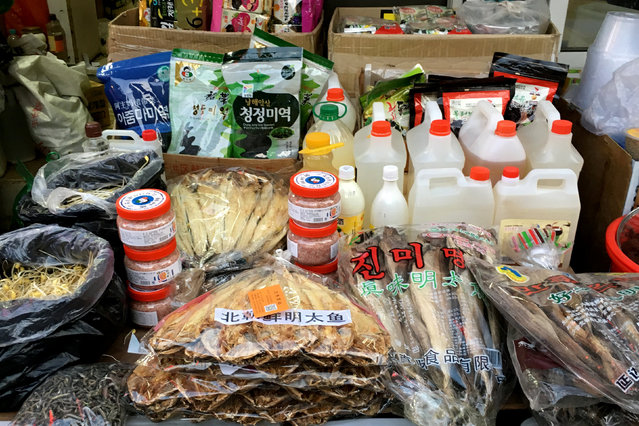 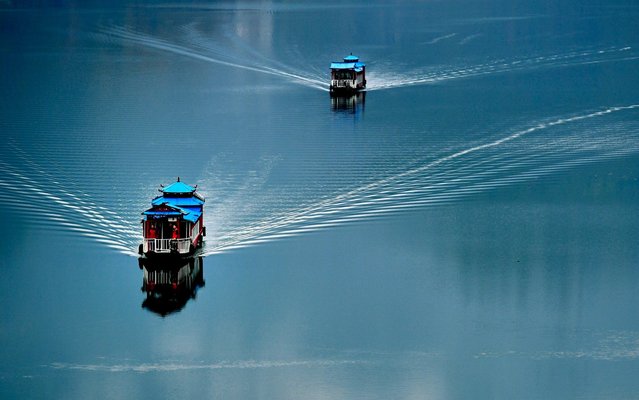 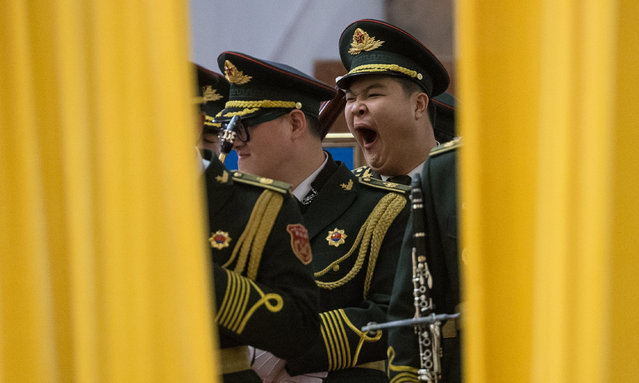 A member of Chinese military orchestra yawns as he waits for the start of a welcome ceremony for President of the Maldives Abdulla Yameen Abdul Gayoom at the Great Hall of the People in Beijing, China, 07 December 2017. President Gayoom is on an official visit to China from 06 to 09 December. (Photo by Roman Pilipey/EPA/EFE) 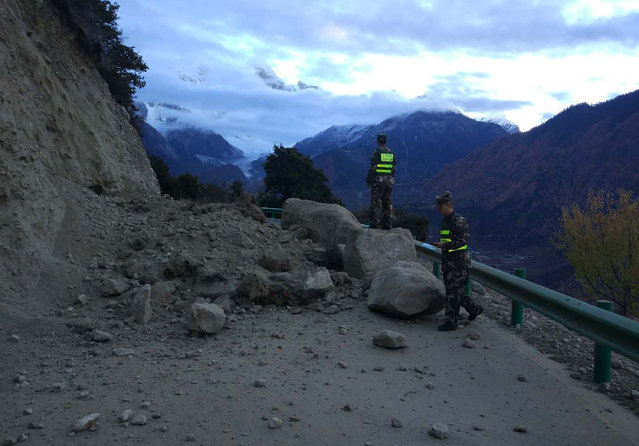 In this photo released by China's Xinhua News Agency, rescuers look at a road blocked by fallen rocks in Paizhen town in Mainling county of Nyingchi city in southwestern China's Tibet Autonomous Region, Saturday, November 18, 2017. A strong earthquake has shaken China's Tibet region. The U.S. Geological Survey says the 6.3 magnitude quake hit at a depth of about 6 miles (10 kilometers) about 36 miles (58 kilometers) northeast of Nyingchi. (Photo by Liu Pengchao/Xinhua via AP Photo) 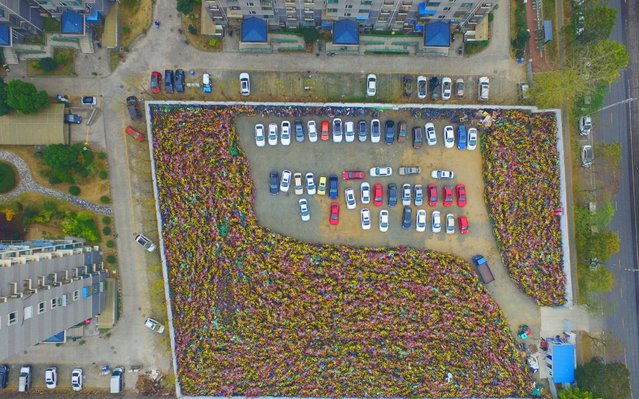 Mountain of impounded shared bikes can be seen at a parking lot in Nanjing, east China's Jiangsu Province on November 29, 2017. Although the bike-sharing services are booming nationwide in China, it's challenging to manage bike-sharing and arrange orderly parking, and some bike-sharing companies have gone bankrupt after months of problems. (Photo by Fang Dongxu/Photoshot/Avalon) 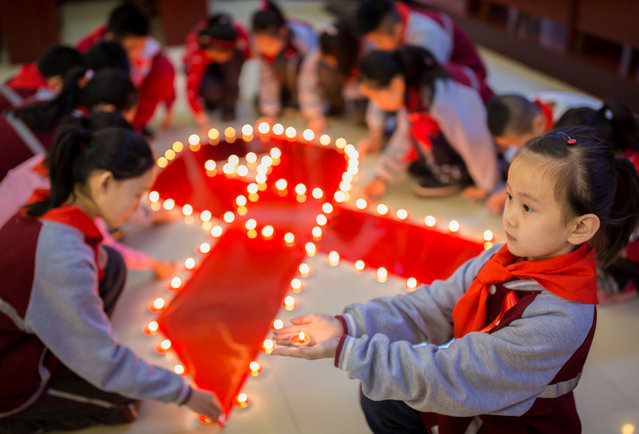 Students use candles to form a large ribbon during an event to mark World AIDS Day at a primary school in Hohhot, Inner Mongolia autonomous region, China December 1, 2017. (Photo by Reuters/China Stringer Network) 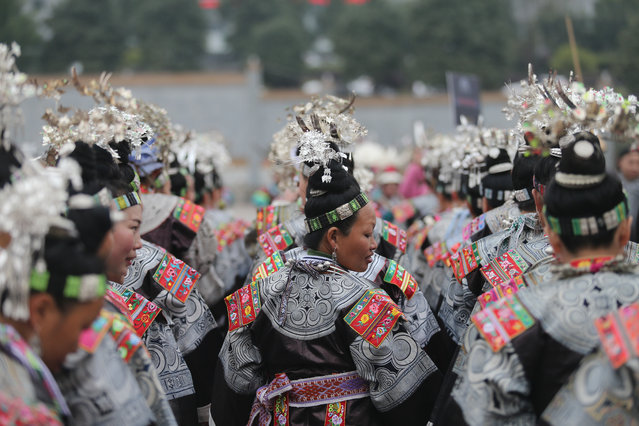