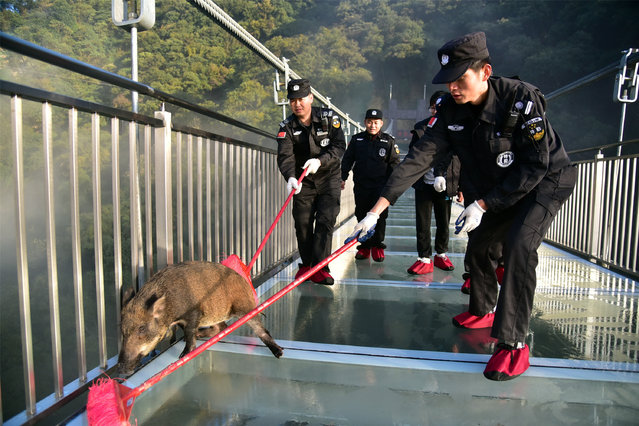 Security guards with brooms help a wild boar get off a glass bridge at Gulong gorge on November 29, 2018 in Qingyuan, Guangdong Province of China. (Photo by Zeng Linghua/VCG via Getty Images) 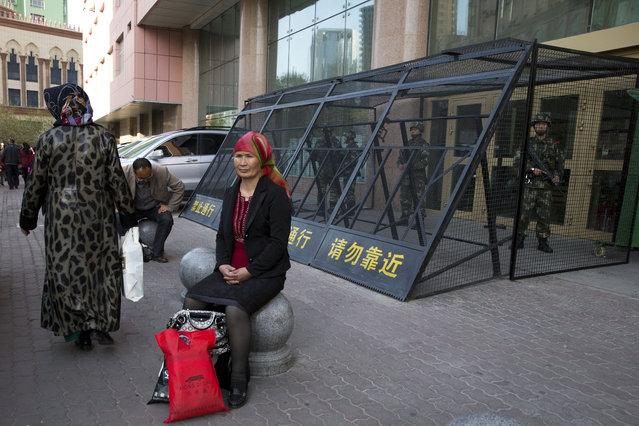 In this May 1, 2014, file photo, an Uighur woman rests near a cage protecting heavily armed Chinese paramilitary policemen on duty in Urumqi in China's northwestern region of Xinjiang. Uighur homeland has been blanketed with stifling surveillance, from armed checkpoints on street corners to facial-recognition-equipped CCTV cameras steadily surveying passers-by. Now, Uighurs say, they must live under the watchful eye of the ruling Communist Party even inside their own homes. (Photo by Ng Han Guan/AP Photo) 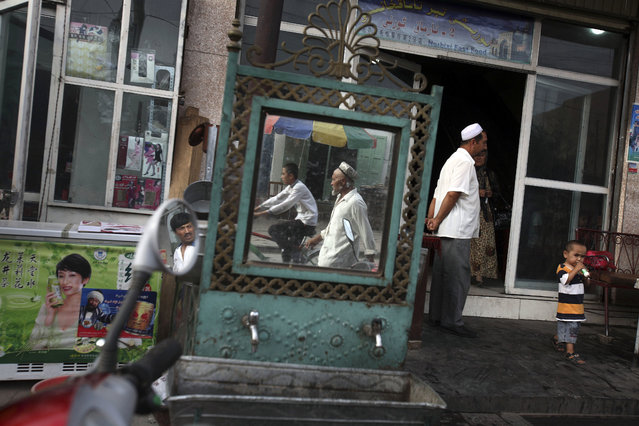 In this August 6, 2008, file photo, Uighurs are seen outside a restaurant in Kashgar in China's western Xinjiang province. More than a million Chinese civil servants have been assigned to move into the homes of Uighurs and other ethnic minorities, spending weeks as uninvited guests. While government notices about the "Pair Up and Become Family" program portray it as an affectionate cultural exchange, exiled Uighurs living in Turkey said their loved ones saw the campaign as a chilling intrusion, aimed at coercing Uighurs into living secular lives like the Han majority. (Photo by Ng Han Guan/AP Photo) 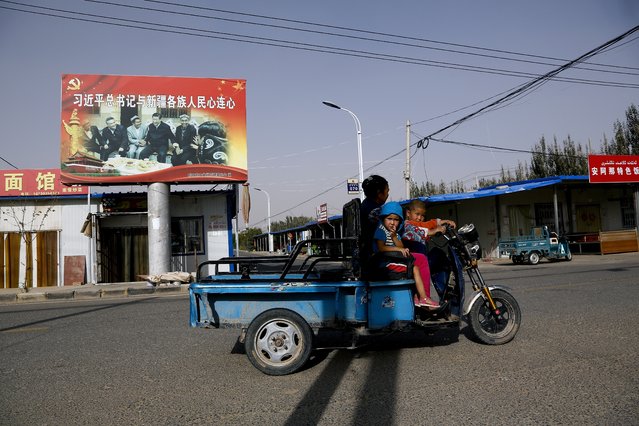 In this September 20, 2018, file photo, an Uighur woman shuttles school children on an electric scooter as they ride past a propaganda poster showing China's President Xi Jinping joining hands with a group of Uighur elders in Hotan, in western China's Xinjiang region. Under Chinese President Xi Jinping, the Uighur homeland has been blanketed with stifling surveillance, from armed checkpoints on street corners to facial-recognition-equipped CCTV cameras steadily surveying passers-by. Now, Uighurs say, they must live under the watchful eye of the ruling Communist Party even inside their own homes. (Photo by Ng Han Guan/AP Photo) 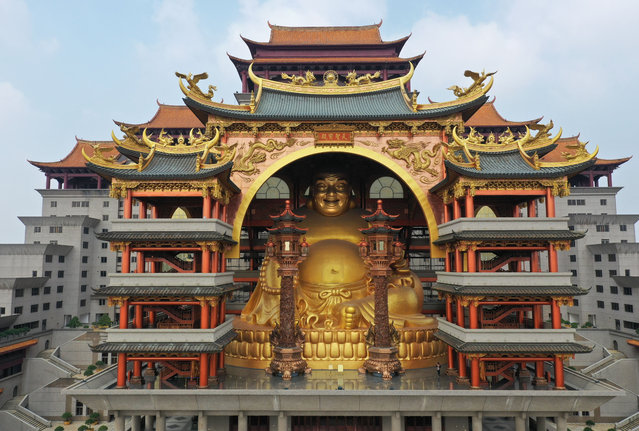 The world’s largest indoor Buddha statue, which is 300 metres high and weighs 600 tonnes, in the Yun Tian Gong complex, Guangxi Zhuang, China on November 26, 2018. A grand architecture “Yun Tian Gong” in Yulin city, south China's Guangxi, has become a pilgrimage site for Buddhism believers. Located upon the Nanliu River, the 21-storey palace covers an area of 140,000 square meters, with a height of 108 meters. The world's largest indoor Buddha statue with a height of 30 meters and a weight of 600 tons is enshrined in it. Known as the Guangxi's “Potala Palace”, the building was built by a Taiwanese businessman with 2 billion yuan (USD$300 million). (Photo by Imaginechina/Rex Features/Shutterstock) 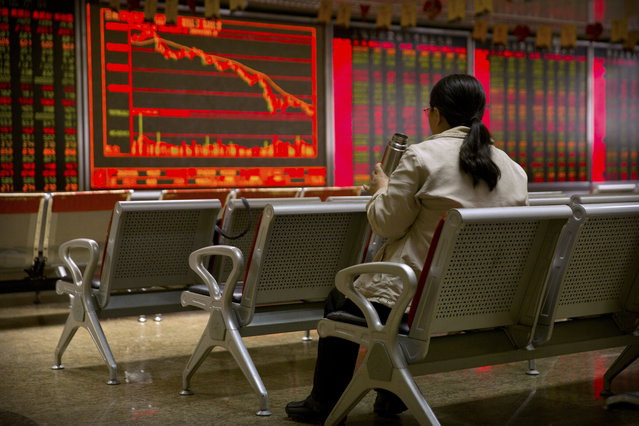 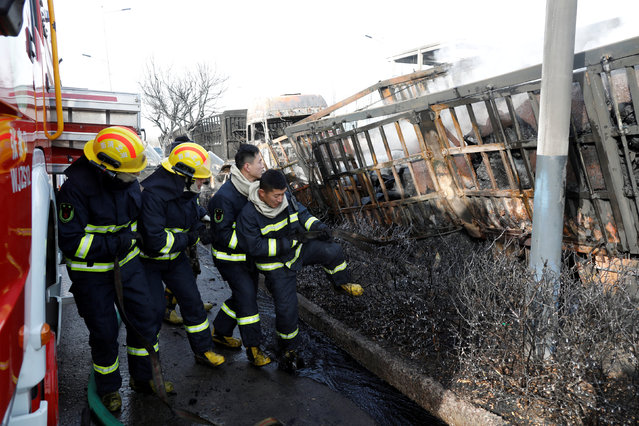 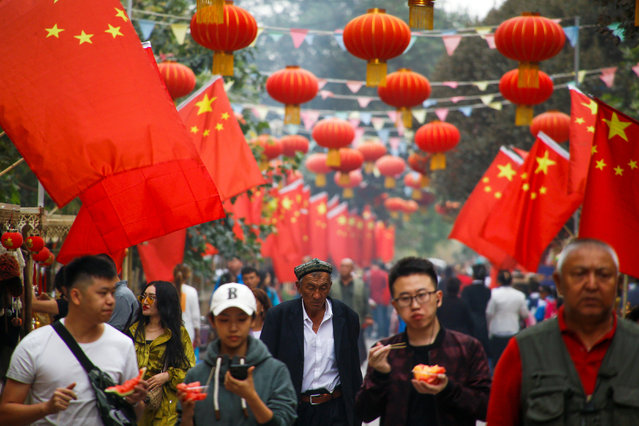 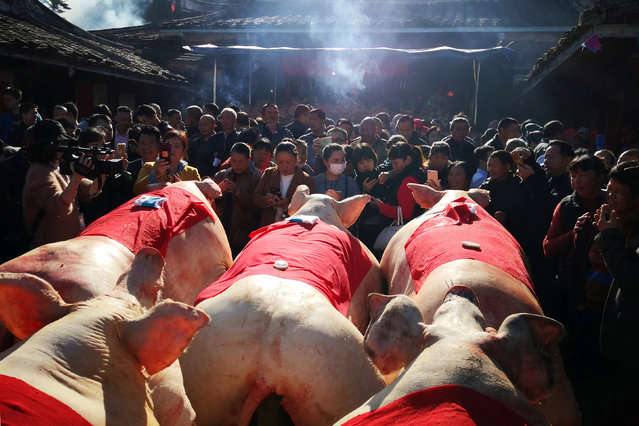 People look at pig carcasses during a contest to choose the biggest pig, in front of an ancestral hall at a village in Datian county, Fujian province, China November 30, 2018. (Photo by Reuters/China Stringer Network) 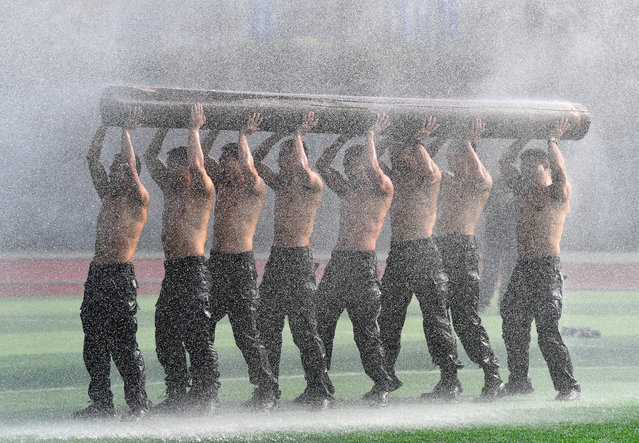 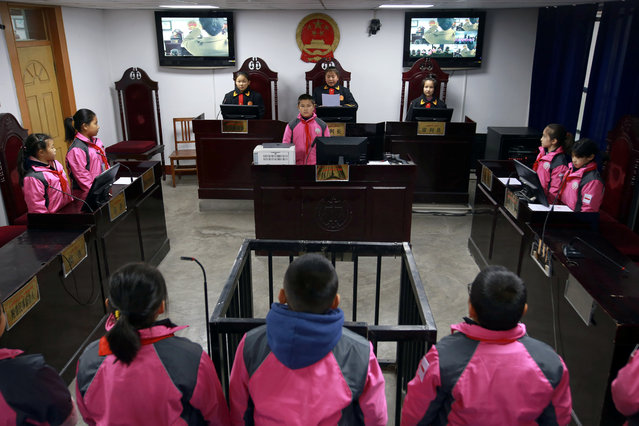 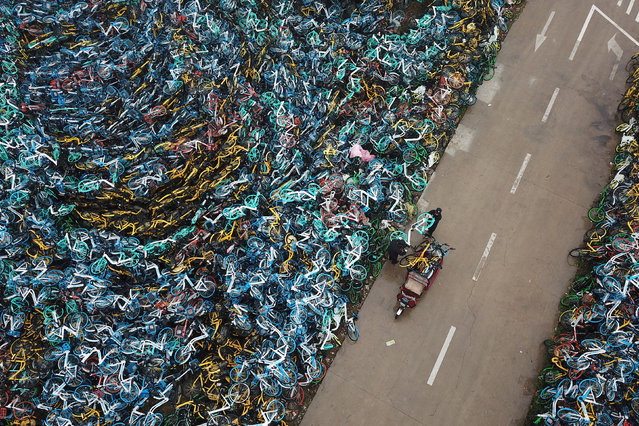 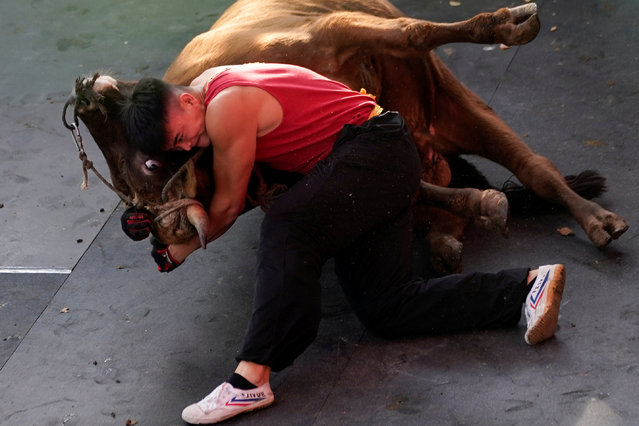 Zhong Xiaojie, 19, wrestles a bull to the ground during a bullfight in Jiaxing, Zhejiang province, China on October 27, 2018. (Photo by Aly Song/Reuters) 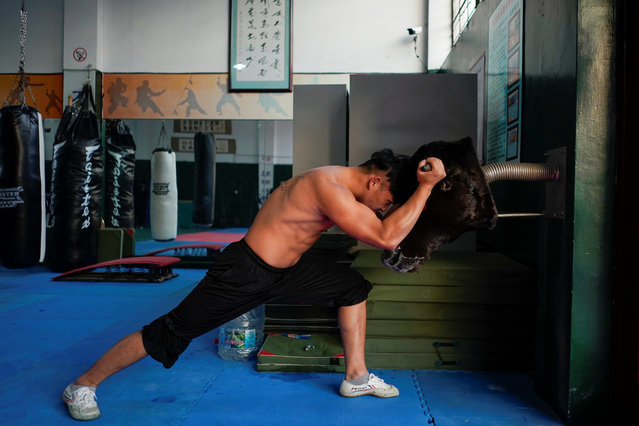 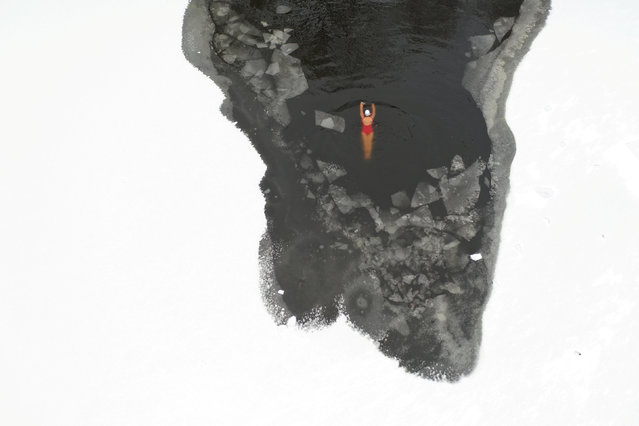 A winter swimmer swims in a frozen river at a park in Shenyang, Liaoning province, China December 6, 2018. (Photo by Reuters/China Stringer Network) 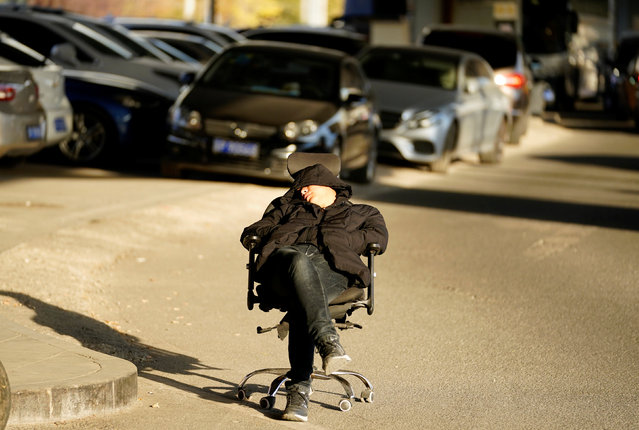 A man takes a nap at a park on a winter afternoon in downtown Beijing, China, November 22, 2018. (Photo by Jason Lee/Reuters) 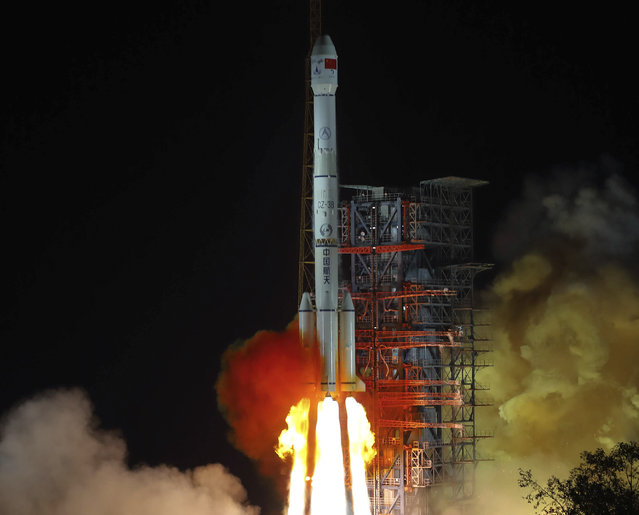 In this photo released by Xinhua News Agency, the Chang'e 4 lunar probe launches from the the Xichang Satellite Launch Center in southwest China's Sichuan Province, Saturday, December 8, 2018. China launched a ground-breaking mission Saturday to soft-land a spacecraft on the largely unexplored far side of the moon, demonstrating its growing ambitions as a space power to rival Russia, the European Union and U.S. (Photo by Jiang Hongjing/Xinhua News Agency via AP Photo) 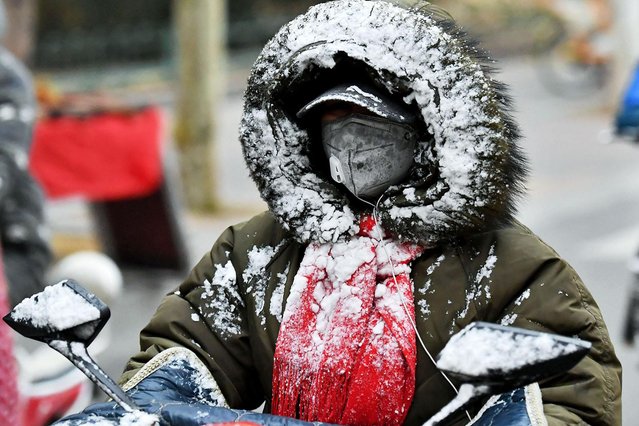 A citizen covered with snow on clothes drives a vehicle on a road on December 5, 2018 in Shijiazhuang, Hebei Province of China. National Meteorological Center of CMA on Wednesday issued a blue alert for a cold wave. (Photo by Zhai Yujia/China News Service/VCG via Getty Images) 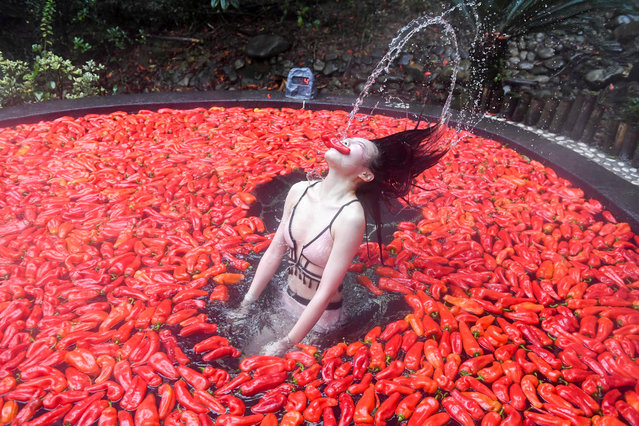