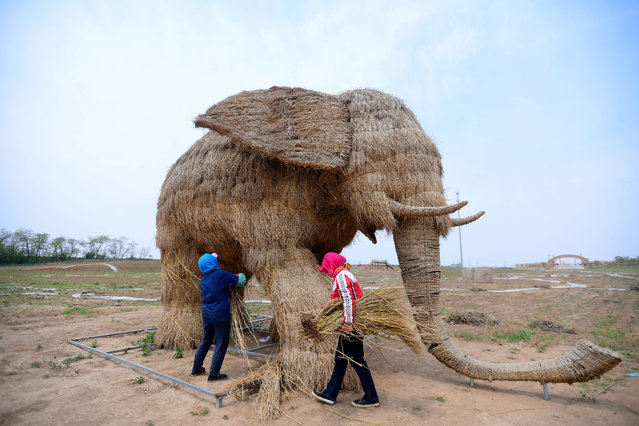 Farmers build a straw sculpture in the shape of an elephant in Hunnan district of Shenyang, Liaoning province, China May 31, 2017. (Photo by Reuters/China Daily) 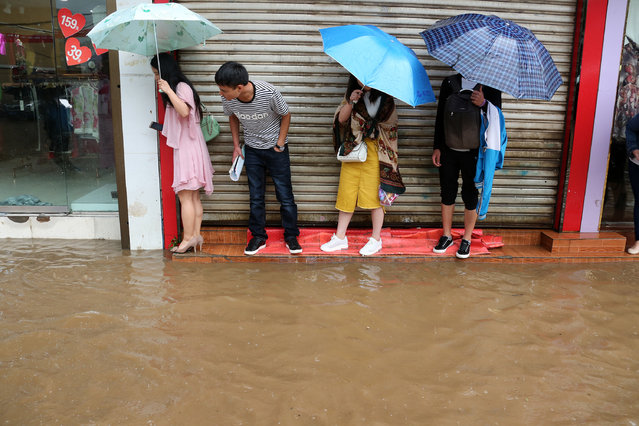 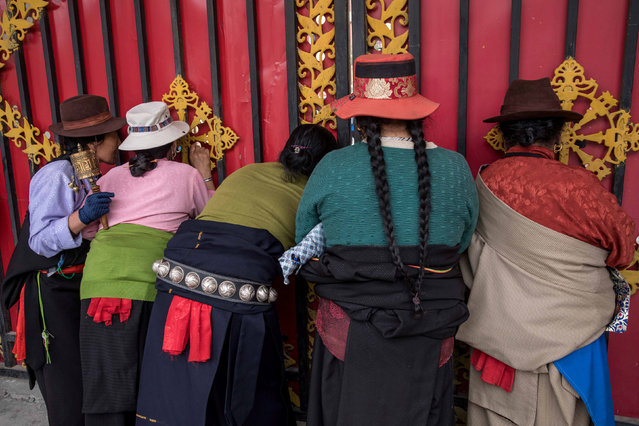 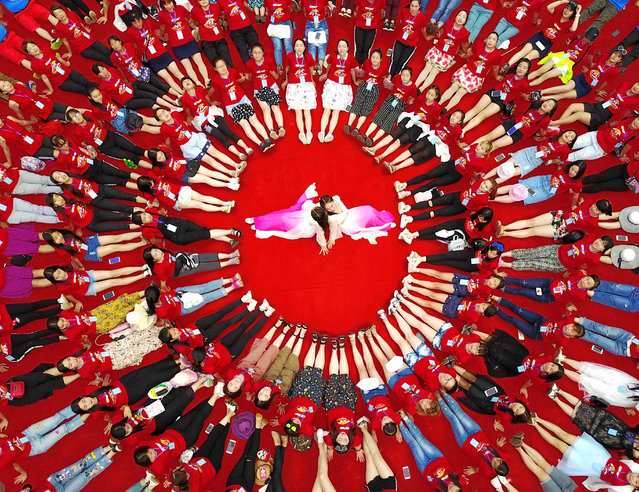 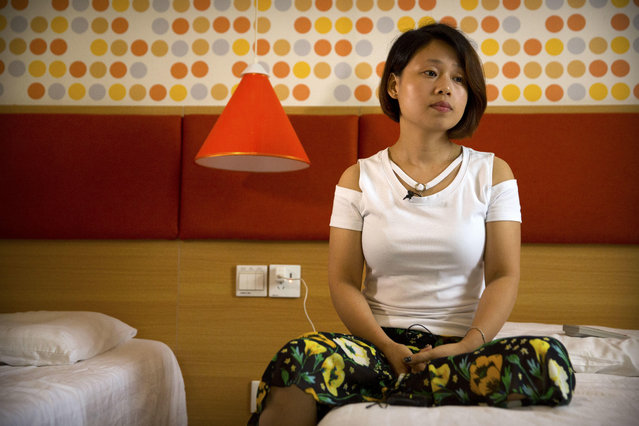 Deng Guilian, the wife of detained Chinese labor activist Hua Haifeng, speaks during an interview in Ganzhou in southeastern China's Jiangxi Province, Tuesday, June 6, 2017. The Chinese government rejected calls to release three activists detained while investigating a Chinese company that produced shoes for Ivanka Trump and other brands and sought to enforce a cone of silence around the men, according to a family member and lawyer who were interrogated and told not to speak to the foreign press. (Photo by Mark Schiefelbein/AP Photo) 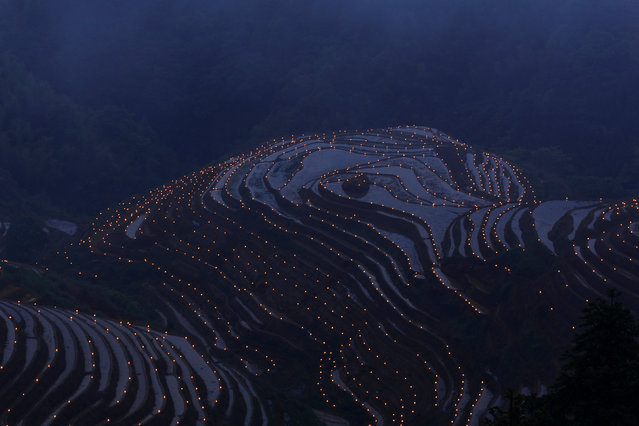 Thousands of torches are placed in terraced fields by villagers during a local festival praying for good harvest at Guilin, Guangxi Zhuang Autonomous Region, China June 3, 2017. (Photo by Reuters/Stringer) 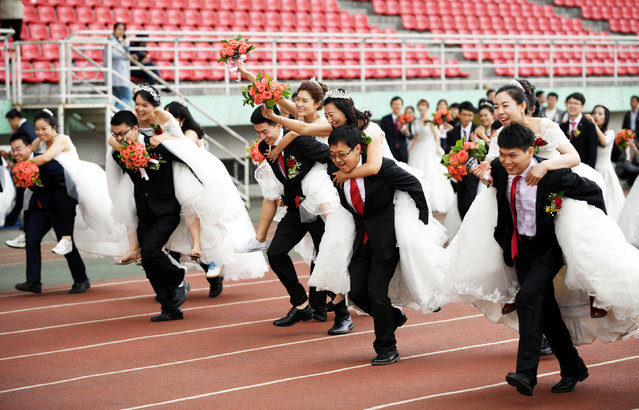 Couples take part in a competition during a mass wedding of 64 doctoral student couples at Harbin Institute of Technology, a university in Harbin, Heilongjiang province, China, June 4, 2017. (Photo by Reuters/Stringer) 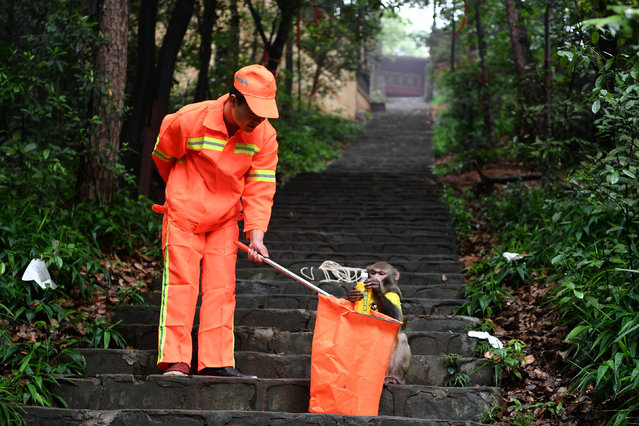 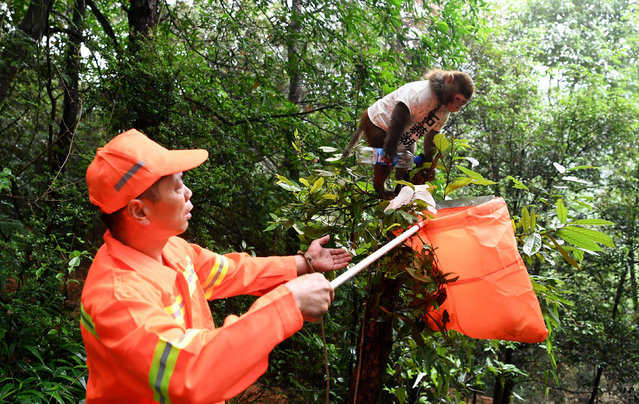 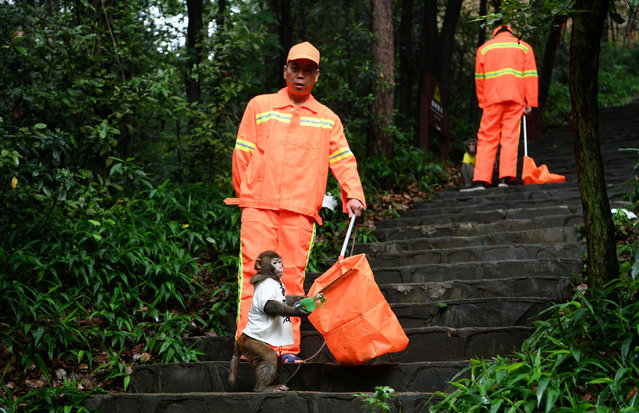 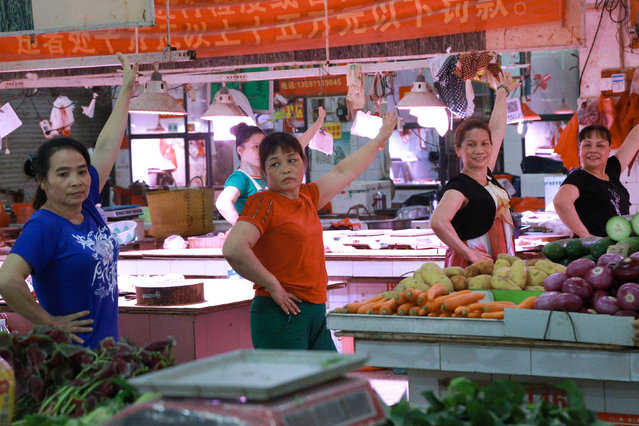 Vendors dance to exercise at a food market in the afternoon where there are less customers, in Nanning, Guangxi province, China, June 5, 2017. (Photo by Reuters/Stringer) 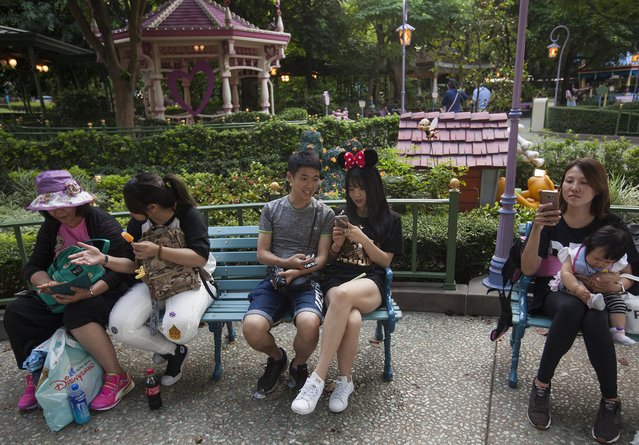 Tourists take a break at Hong Kong Disneyland, in Hong Kong, China, 27 May 2017. The numbers of tourists visiting Hong Kong Disneyland has declined since Shanghai Disneyland opened in June 2016. Shanghai Disney Resort has announced on 19 May that more than 10 million people have visited the park after eleven months of operations, outshining its Hong Kong counterpart which has posted financial losses for two consecutive years. (Photo by Alex Hofford/EFE/EPA) 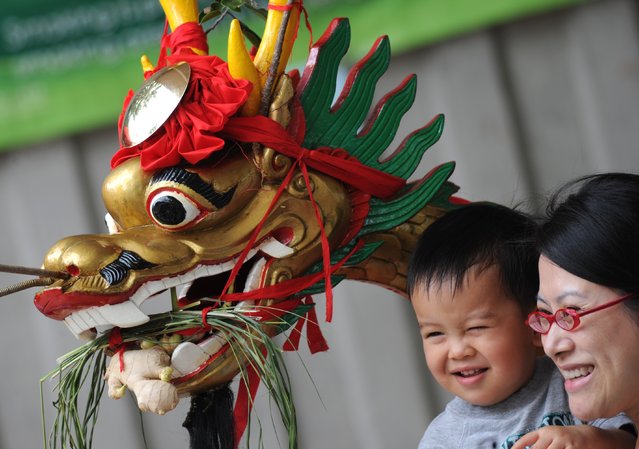 A boy is held next to a dragon head adorning a boat during the dragon boat racing in the Aberdeen typhoon shelter in Hong Kong on June 23, 2012. According to legend national hero Qu Yuan died fighting for political reform. Townspeople tried to rescue him from drowning in the river and beat drums to scare the fish and now the tradition is continued with Dragon Boat races. (Photo by Antony Dickson/AFP Photo) 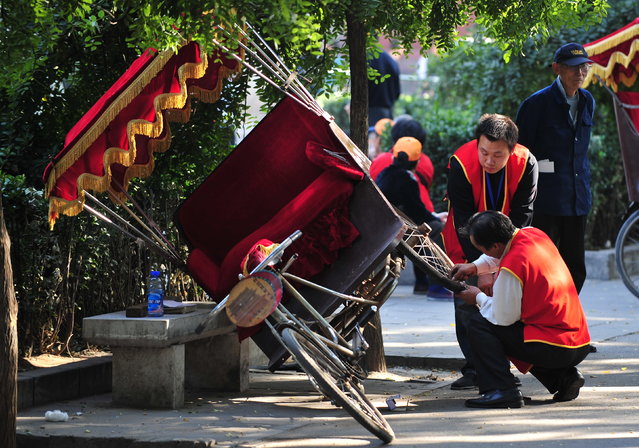 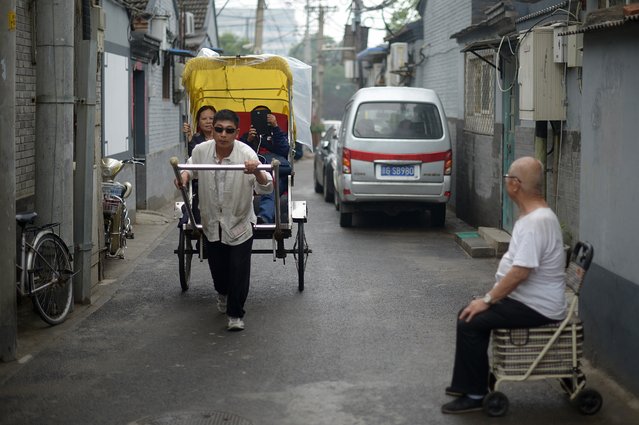 A Chinese rickshaw driver walks through an alley in Beijing on May 24, 2014. Chinese manufacturing activity saw a sharp improvement in May, hitting a five-month high, HSBC said on May 20, but it warned more government action was needed to kickstart the world's number two economy. (Photo by Wang Zhao/AFP Photo) 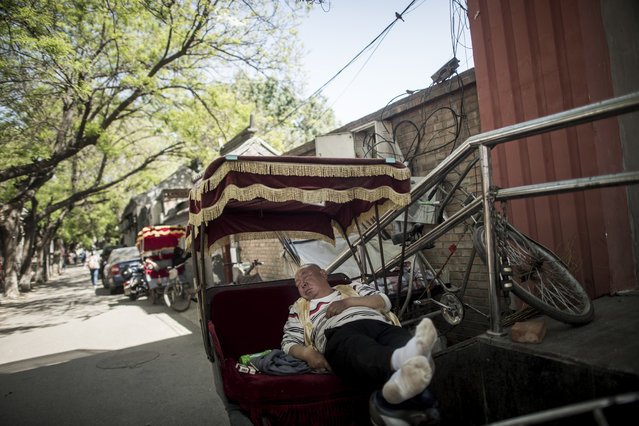 This photo taken on April 23, 2017 shows a rickshaw driver taking a rest during lunch time in Beijing. Appearing in China at the end of the 19th century, rickshaws originally had two wheels and were pulled by their driver on foot, with passengers seated at the back. Today, most of the vehicles are tricycles – some still have pedals and are propelled by physical force, but the majority are equipped with electric or gas engines. (Photo by Fred Dufour/AFP Photo) 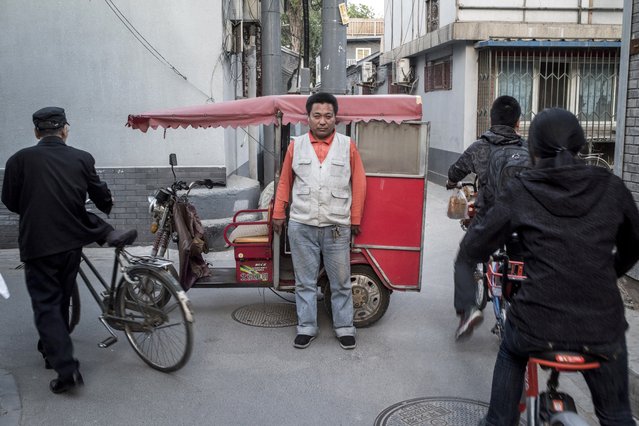 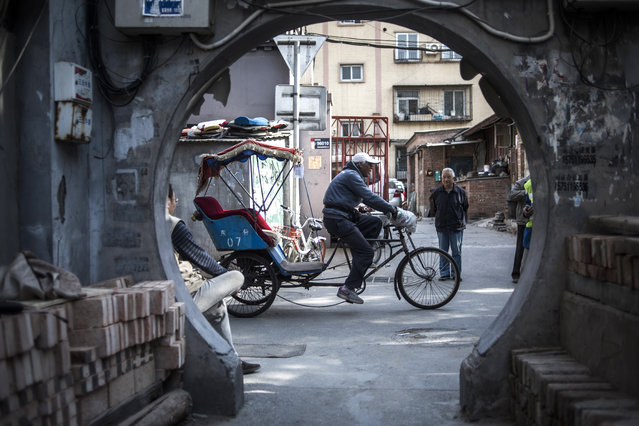 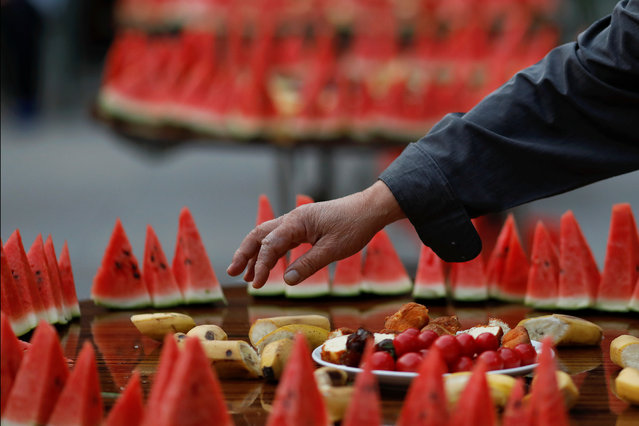 A man reaches for the food as Muslims gather before breaking fast on the first Friday of the holy fasting month of Ramadan at the historic Niujie Mosque in Beijing, China June 2, 2017. (Photo by Damir Sagolj/Reuters) 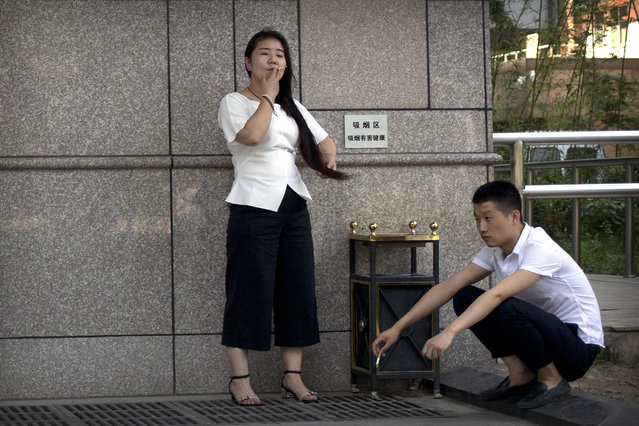 A man and a woman smoke cigarettes outside of an office building in Beijing, Wednesday, May 31, 2017. A decade-long study has found that most smokers in China, the world's largest consumer of tobacco, have no intention of kicking the habit and remain unaware of some of its most damaging health effects. (Photo by Mark Schiefelbein/AP Photo) 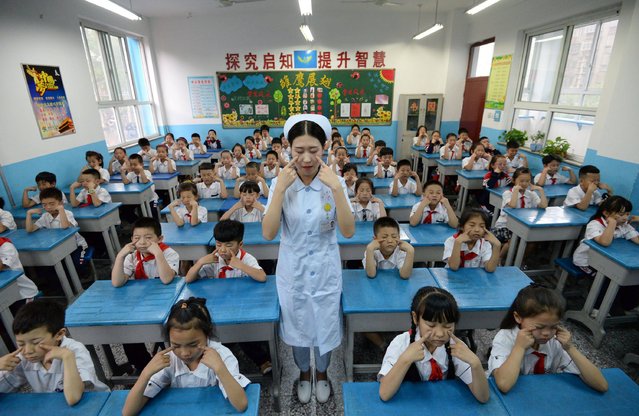 A hospital staff member teaches primary school children how to do eye exercises, at a primary school in Handan, in China's northern Hebei province on June 5, 2017. (Photo by AFP Photo/Stringer) 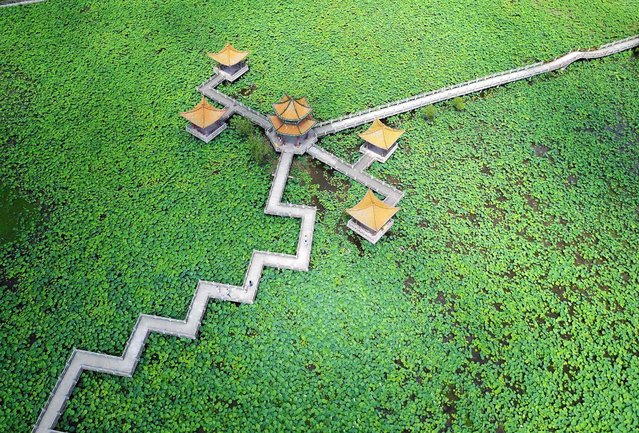 Lotus plants surround a pagoda in a lake in Anlong County, in China's Guizhou province on June 10, 2017. (Photo by AFP Photo/Stringer) 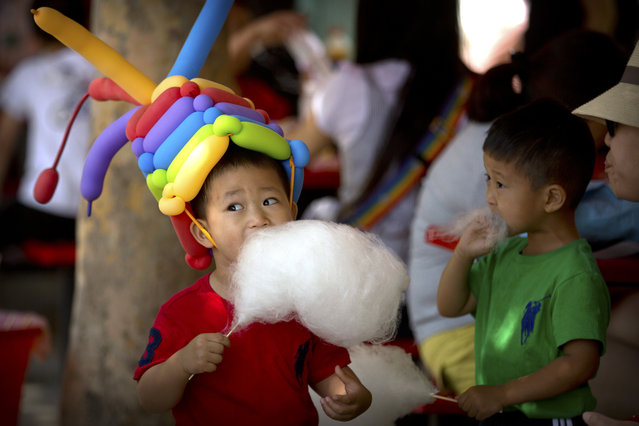 A boy eats cotton candy while wearing a hat made of balloons at a public park in Beijing, Thursday, June 1, 2017. Thursday is International Children's Day, a holiday for children celebrated in many countries around the world. (Photo by Mark Schiefelbein/AP Photo) 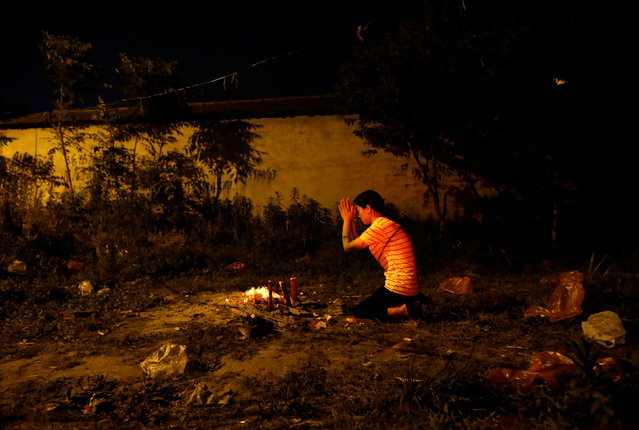 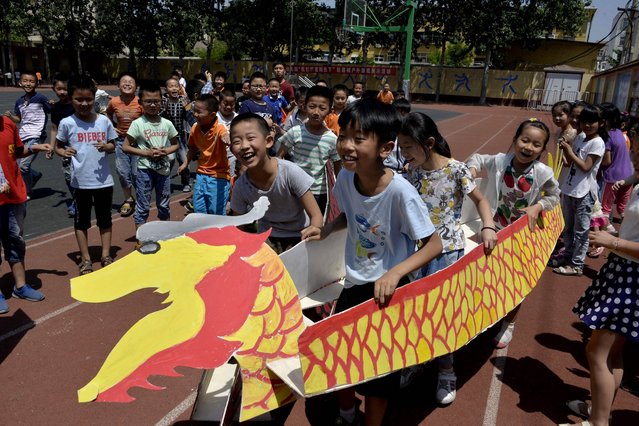 This photo taken on May 25, 2017 shows students competing as they carry dragon boats made of paper during a race to celebrate the upcoming Dragon Boat Festival, at a primary school in Liaocheng, in eastern China' s Shandong province The dragon boat festival, also called “duanwu”, takes place on the fifth day of the fifth month of the Chinese lunar calendar. (Photo by AFP Photo/Stringer)
Edit Del
13 Jun 2017 08:47:00, post received 0 comments
Publication archive:
←   →
Popular tags:
All tags
Last searches: