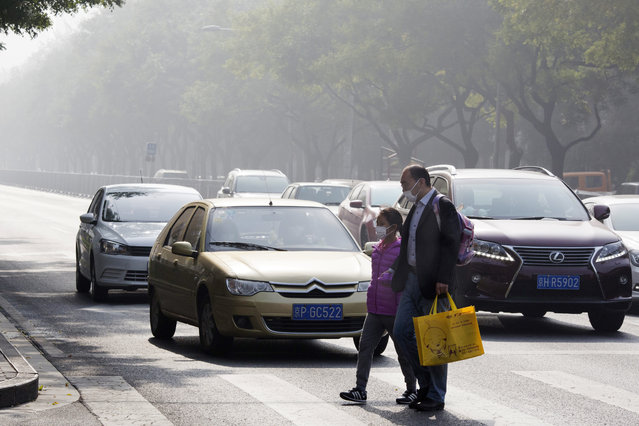 A man and a child wear masks during a heavily polluted day in Beijing, China, Saturday, November 5, 2016. China's cabinet has issued a new climate plan targeting an 18-percent cut in carbon emissions by 2020 compared to 2015 levels. (Photo by Ng Han Guan/AP Photo) 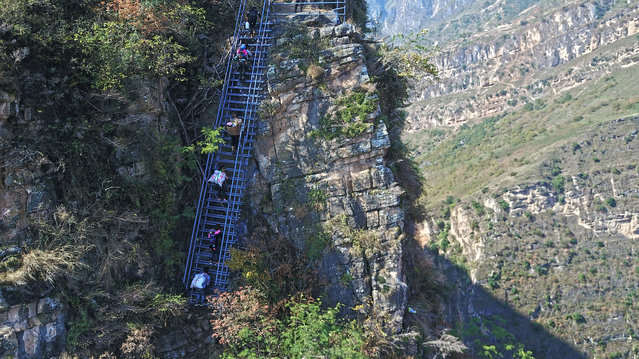 People climb on the newly-built metal ladder with hand railings to Ahtuler village on a cliff on November 11, 2016 in Zhaojue county, China. There were 17 vine ladders on the 800-meter-up way between the village on the top of a mountain and the valley beneath it. New metal ladders were built recently to reduce the risk of the villagers, especially of the school children, after media coverage. (Photo by Feature China/Barcroft Images) 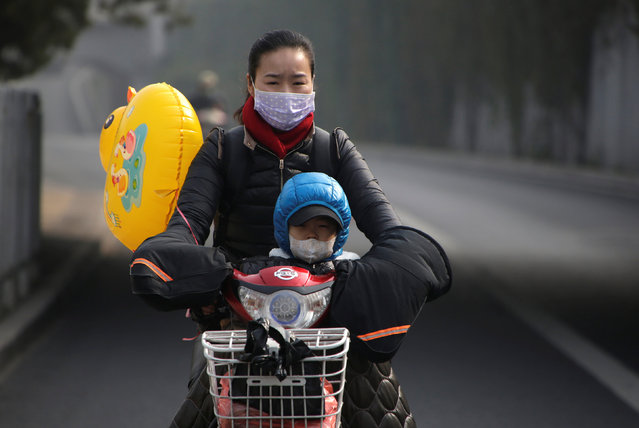 A woman and her son wearing masks ride an electric bicycle on a hazy day in Beijing, China, November 4, 2016. (Photo by Jason Lee/Reuters) 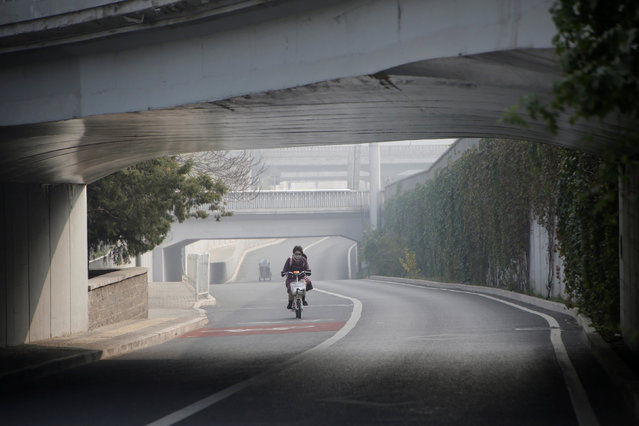 A woman wearing a mask cycles on a hazy day in Beijing, China, November 4, 2016. (Photo by Jason Lee/Reuters) 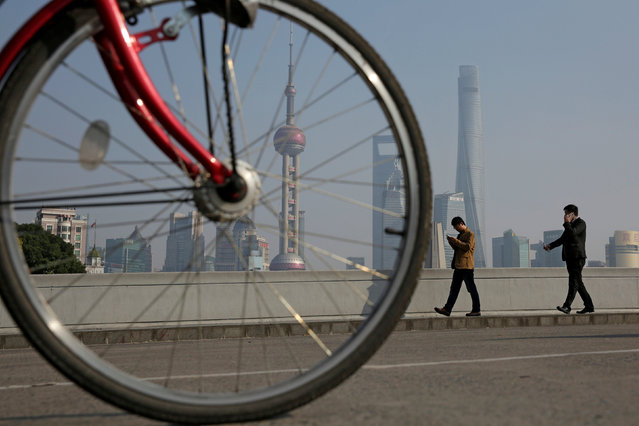 People walk on a bridge in front of the financial district of Pudong in Shanghai, China November 4, 2016. (Photo by Aly Song/Reuters) 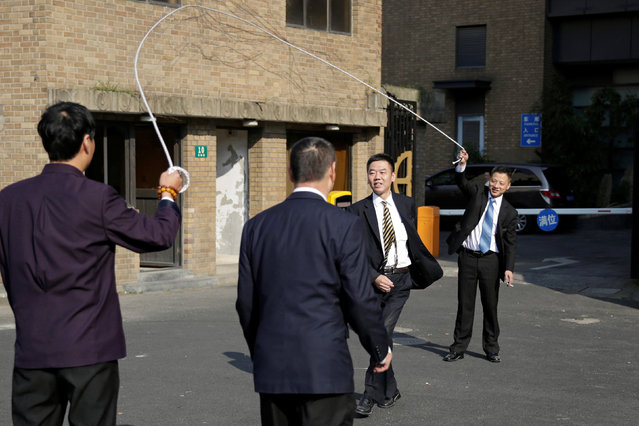 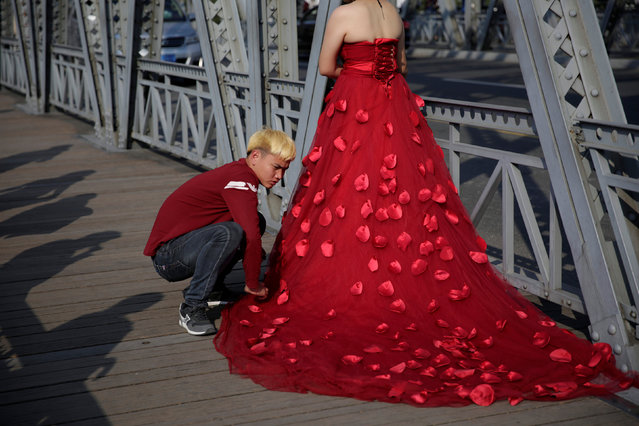 A photographer assistant fixes a wedding dress on a street in Shanghai, China November 4, 2016. (Photo by Aly Song/Reuters) 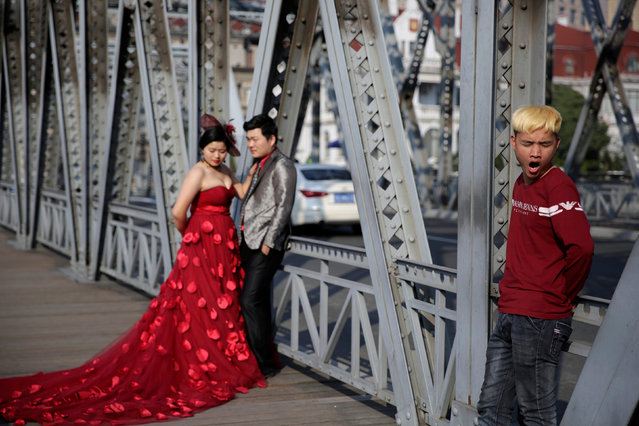 A wedding photographer assistant yawns on a street in Shanghai, China November 4, 2016. (Photo by Aly Song/Reuters) 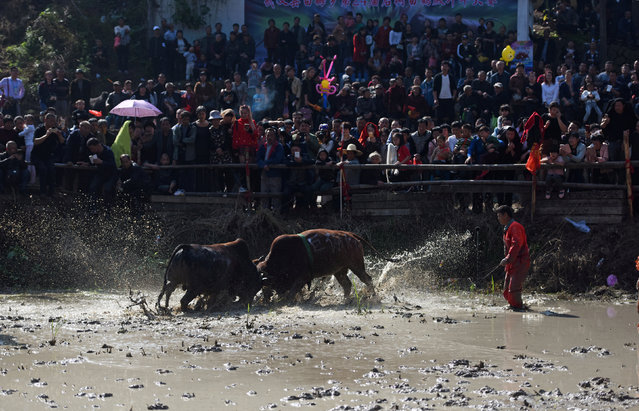 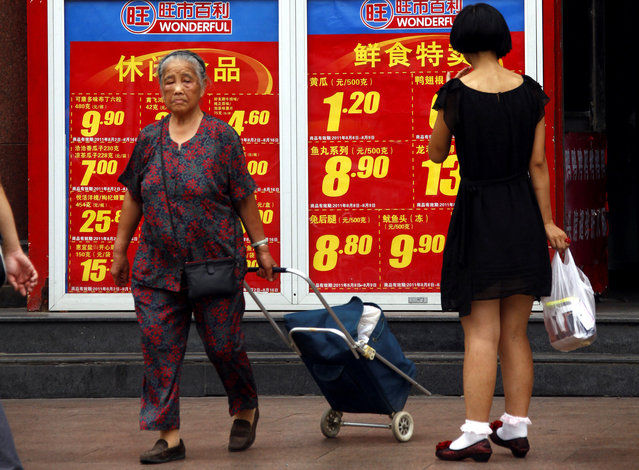 Shoppers walk past and look at a board displaying food prices at a shopping mall in central Beijing August 9, 2011. (Photo by David Gray/Reuters) 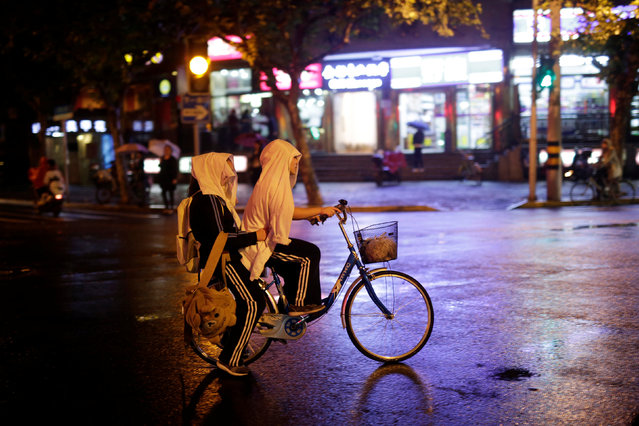 Girls ride a bike on a street during a rainy day in Shanghai, China November 7, 2016. (Photo by Aly Song/Reuters) 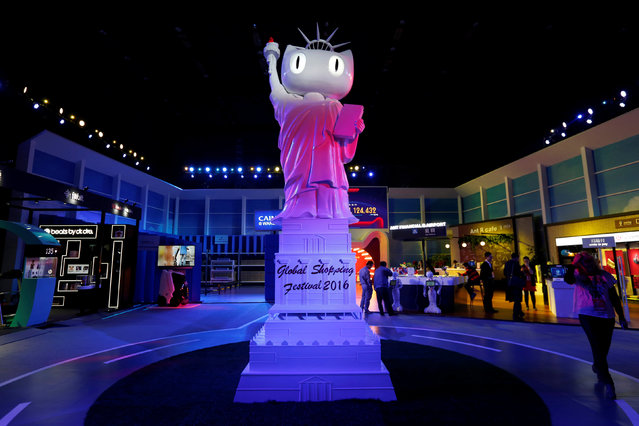 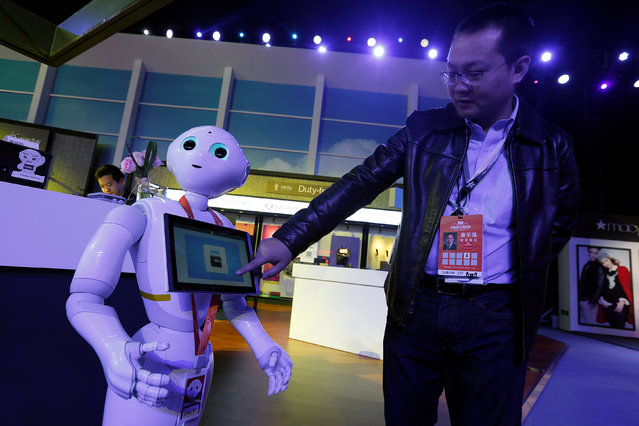 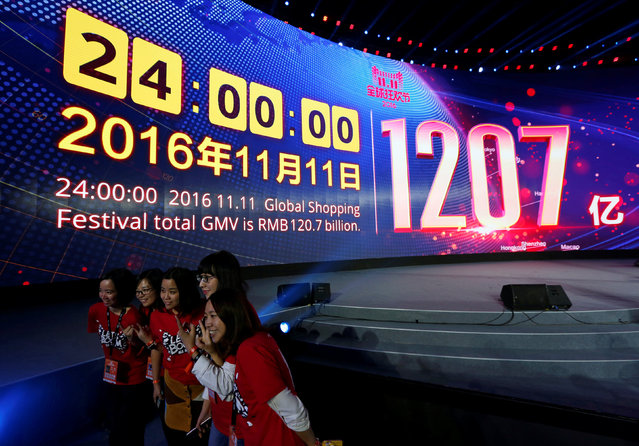 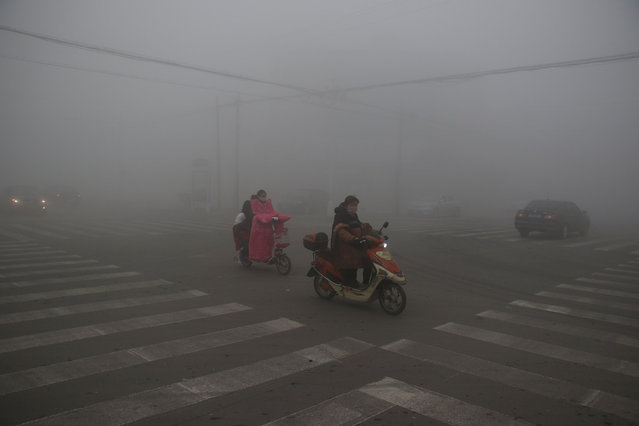 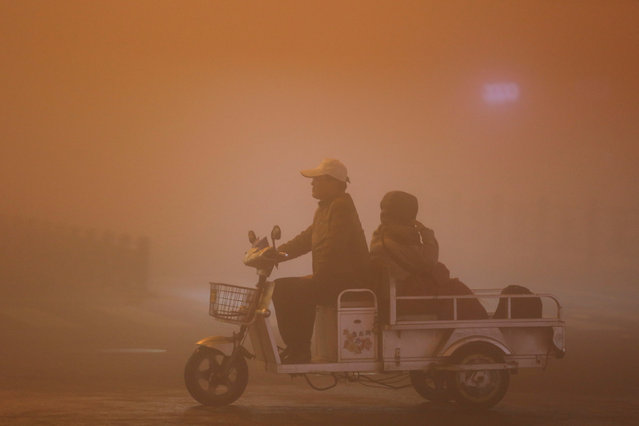 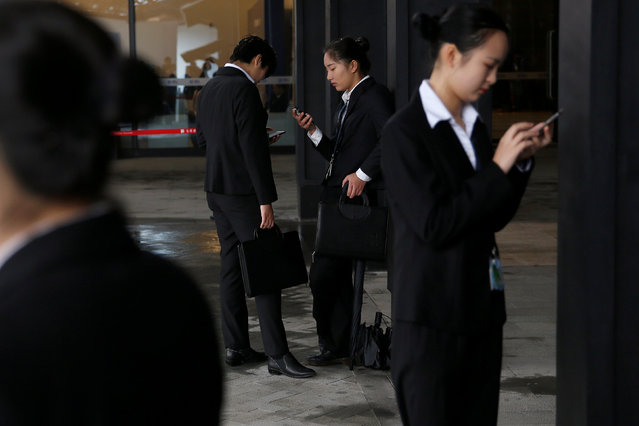 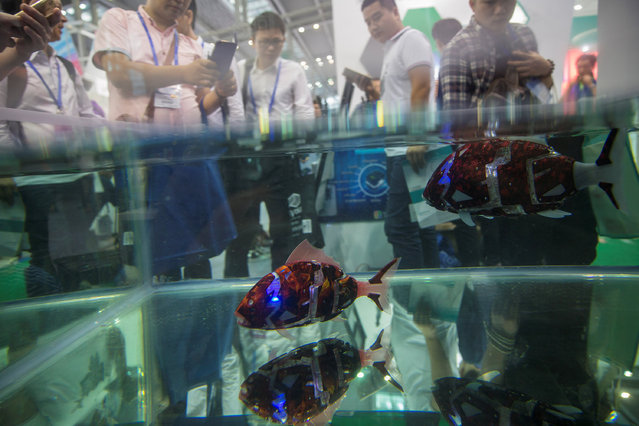 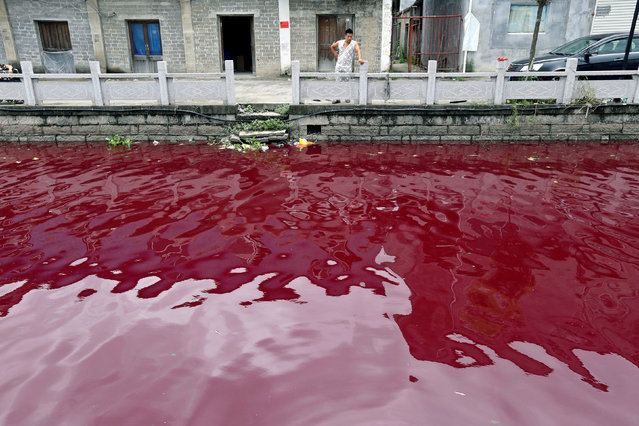 A man looks at a contaminated river in Cangnan county of Wenzhou, Zhejiang province, China July 24, 2014. (Photo by Reuters/Stringer) 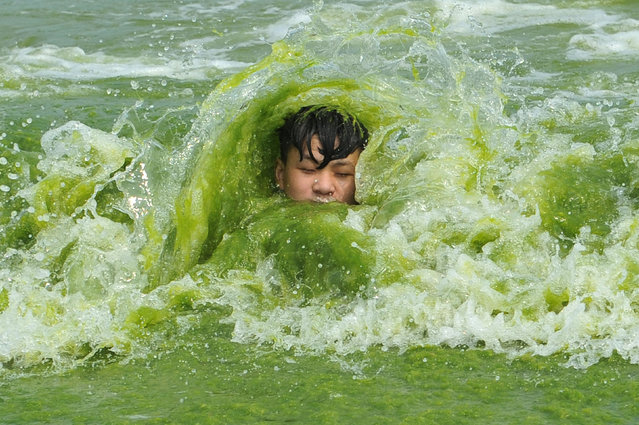 A boy plays on a algae-covered beach in Qingdao, Shandong province, China July 18, 2016. (Photo by Reuters/Stringer) 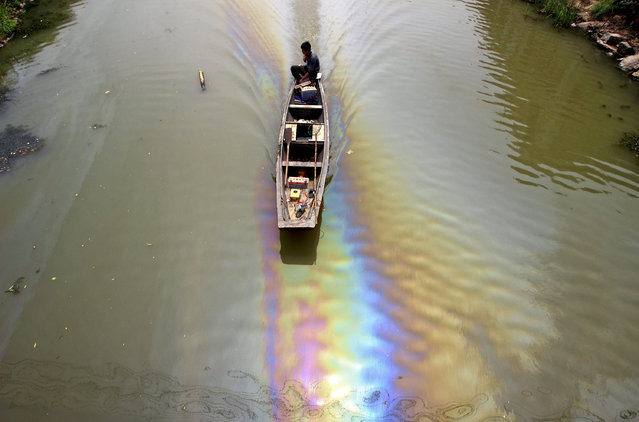 A man drives a boat along a river polluted by leaked fuel, in Shaoxing, Zhejiang province, China April 29, 2015. (Photo by Reuters/Stringer) 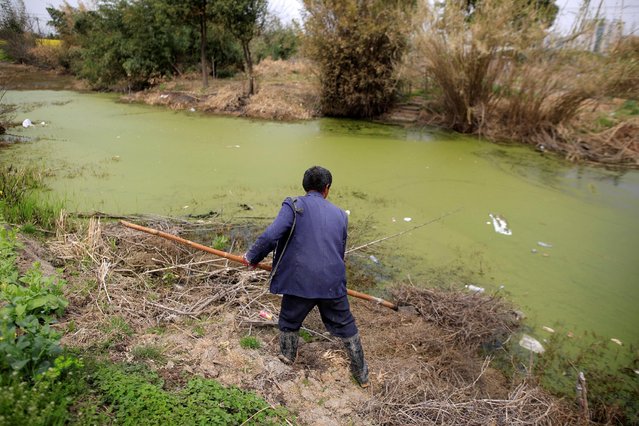 A farmer works on a polluted river in Shanghai, China March 21, 2016. (Photo by Aly Song/Reuters) 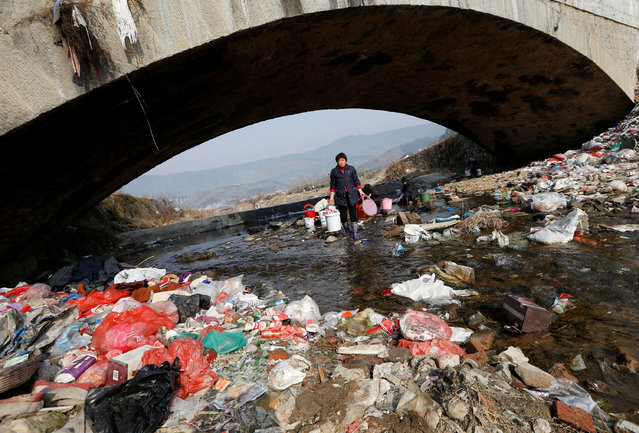 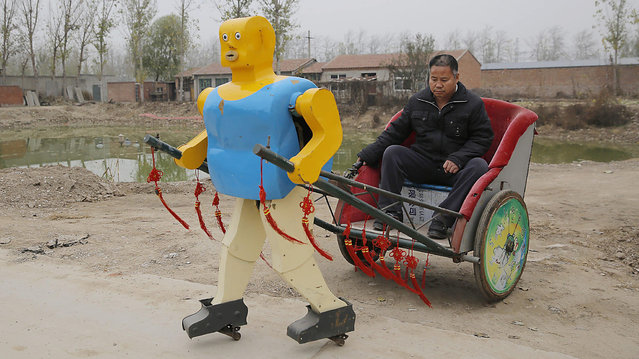 Robot inventor Wu Yulu sits on a rickshaw driven by a robot which he invented in his village in rural Beijing's Tongzhou district, China, 17 November 2016. The 54-year-old Chinese farmer living in rural Beijing's Tongzhou district invented 63 robots in the past 30 years. Wu, who only received primary school education, plans to give up the agricultural work for his robot products. He regularly participates in exhibitions, transfers patent rights and teaches at the university to earn money. (Photo by Wu Hong/EPA) 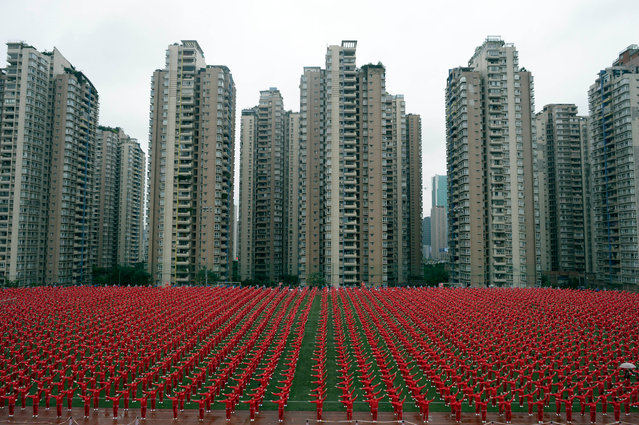 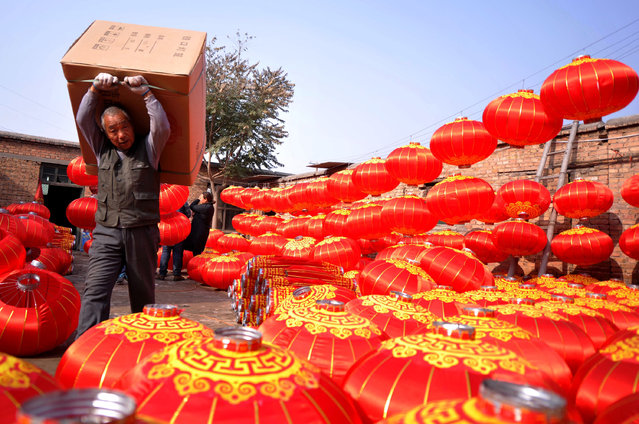 This photo taken on November 10, 2016 shows a man carrying a box of lanterns at a lantern workshop in a village in Shijiazhuang, north China's Hebei province. China's courier services are planning ahead to cope with Singles' Day, an annual e-commerce shopping spree in China that falls on November 11, state media reported. (Photo by AFP Photo/Stringer) 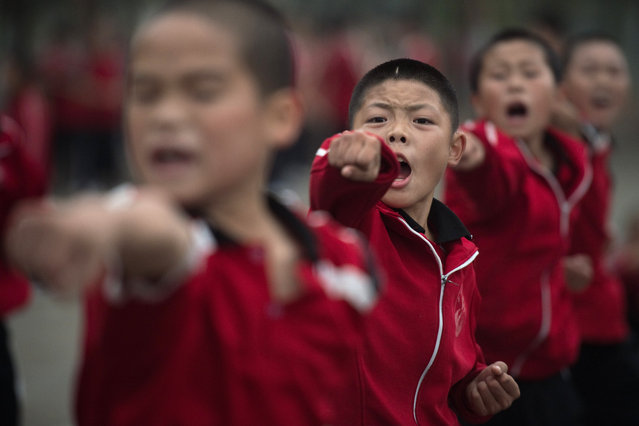 This picture taken on October 20, 2016 shows students practising wushu at the Tagou martial arts school in Dengfeng. China is investing hugely in football training and has vowed to have 50 million school- age players by 2020, as the ruling Communist party eyes “football superpower” status by 2050. Some 1,500 students from the vast Tagou martial arts school, a few miles from the cradle of Chinese kungfu, the Shaolin Temple in Henan province, have signed up for its new soccer programme, centred on a pristine green Astroturf football pitch where dozens of children play simultaneous five- a- side- games. (Photo by Nicolas Asfouri/AFP Photo) 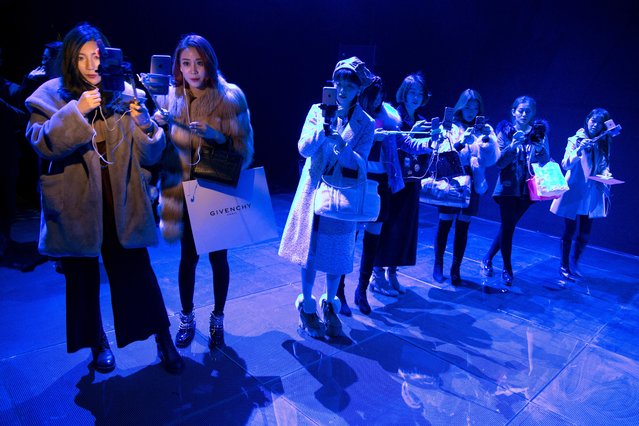