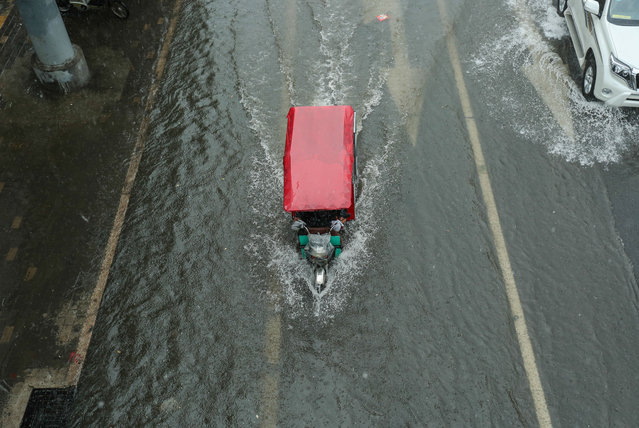 A tricycle makes its way along a flooded street in Beijing on July 20, 2016. Some areas and streets in Beijing have started to flood over due to heavy rain. (Photo by AFP Photo/Stringer) 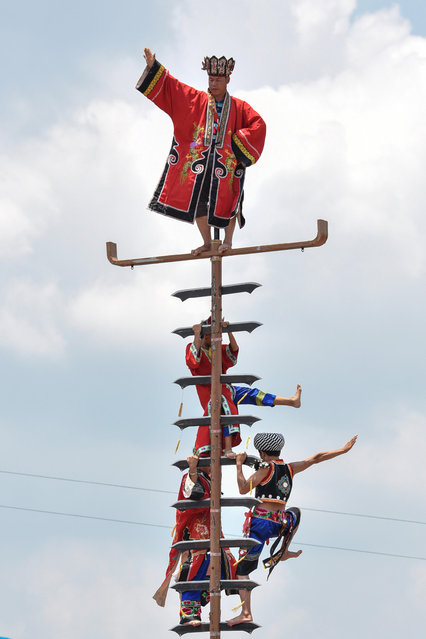 People of Miao ethnic minority climb a blade ladder to celebrate the traditional festival on the 6th day of the 6th month of the Chinese traditional lunar calendar at Songtao Miao Autonomous County on July 18, 2018 in Tongren, Guizhou Province of China. (Photo by VCG) 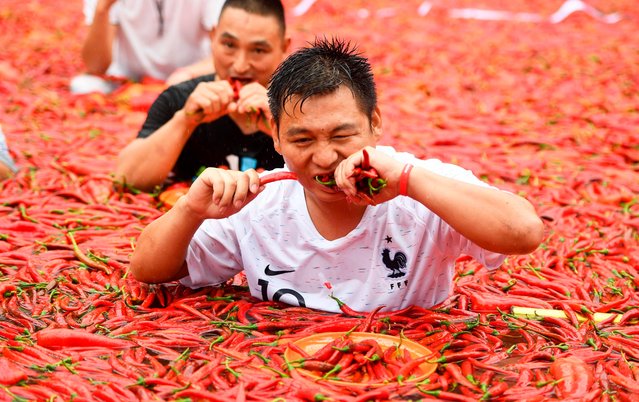 This photo taken on July 8, 2018 shows a contestant taking part in a chilli pepper- eating competition in Ningxiang in China' s central Hunan province. The winner of the contest ate 50 chilli peppers in one minute. (Photo by AFP Photo/Stringer) 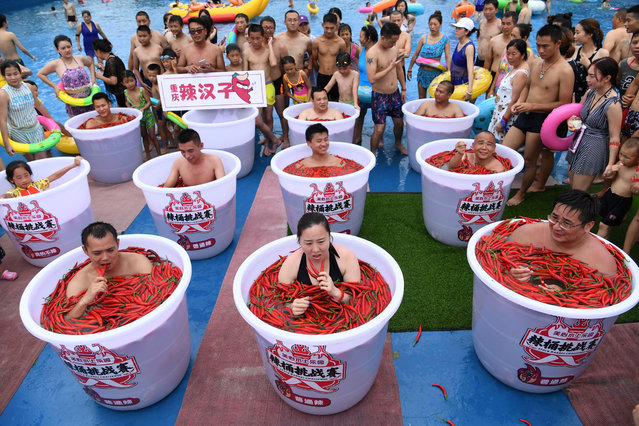 Participants take a bath in barrels filled with chilli peppers during the Spicy Barrel Challenge contest inside a water park in Chongqing, China July 7, 2018. (Photo by Chen Chao/CNS via Reuters) 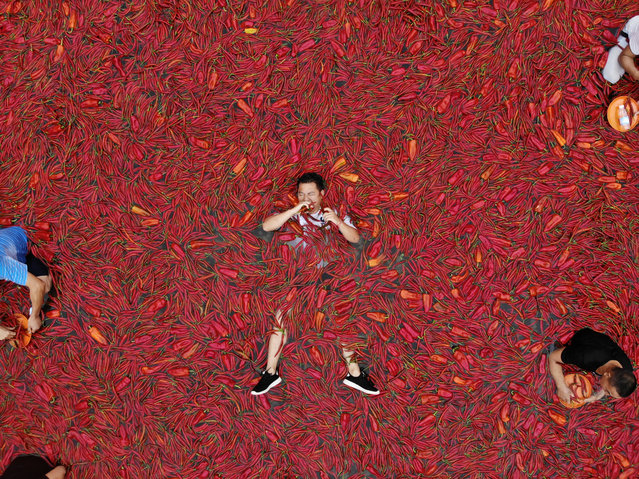 A contestant lies in a chili covered pool eating Chillies during a chili eating contest on July 8, 2018 in Ningxiang, Hunan Province of China. Citizen Tang Shuaihui ate 50 Chillies in one minute winning the contest. (Photo by VCG/Getty Images) 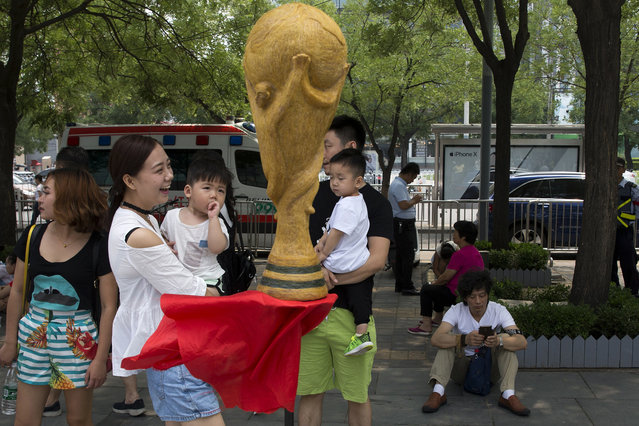 Huang Xin seated bottom right waits near the replica trophy he made from human hair in the likeness of the FIFA World Cup to coincide with the 2018 soccer World Cup held in Russia on the streets of Beijing, China, Monday, June 18, 2018. According to the artist Huang Xin, 2.18 kg. (4.8 lb.) of human hair from as many as 56 ethnicities in China collected over the past four years were used in the creation of the trophy. (Photo by Ng Han Guan/AP Photo) 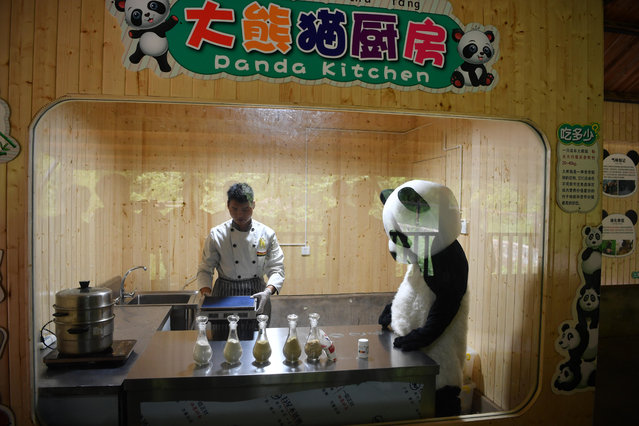 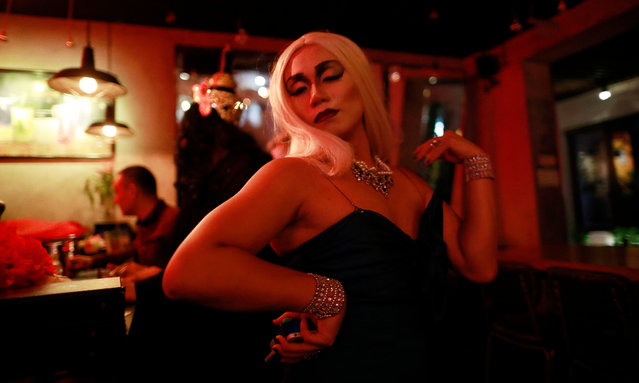 Drag queen Charlie Van de Ho strikes a pose at the bar before their show at Destination night club in Beijing, China, 04 July 2018. Known only by their stage names, Krystal de Canteur, Charlie Van de Ho, Vivian Eastwood and Siberia are part of a group of nine drag queens that have come together this summer to perform weekly at Beijing's gay night club Destination, a first for the capital city to have a regular stage show featuring drag queens. (Photo by How Hwee Young/EPA/EFE) 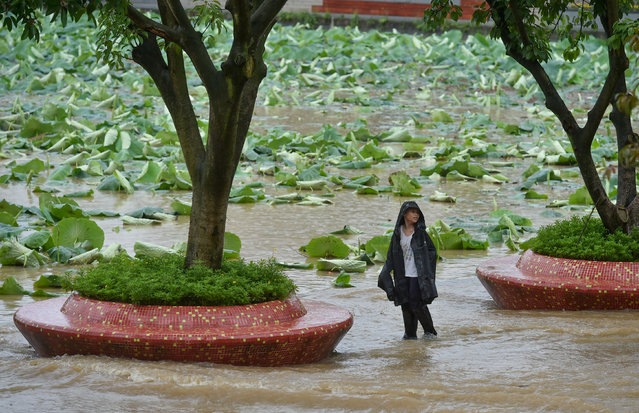 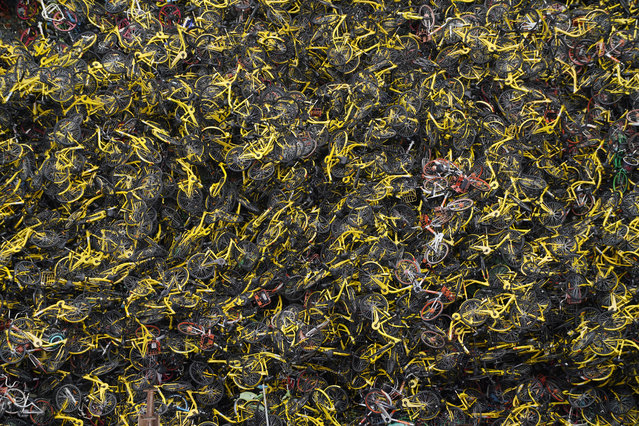 Bicycles of various bike-sharing services are seen in the rubble of houses partially demolished in Shanghai, China July 8, 2018. (Photo by Aly Song/Reuters) 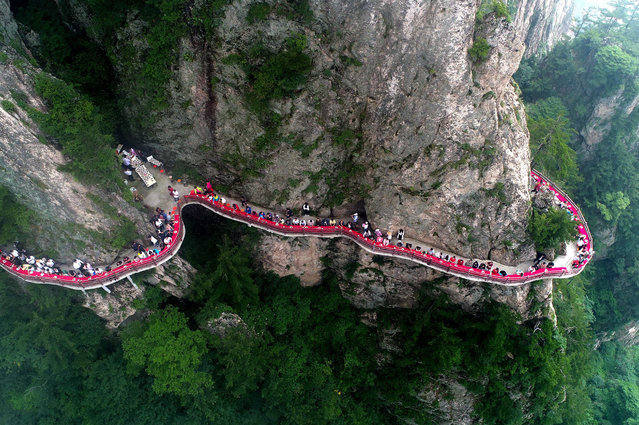 This photo taken on July 8, 2018 shows an aerial view of a banquet held along the edge of a cliff, at Laojun Mountain in Luoyang in China's central Henan province.
The banquet was held on a mountain cliff 2,000-metres (6,500-ft.) above sea level to attract tourists. (Photo by AFP Photo/Stringer) 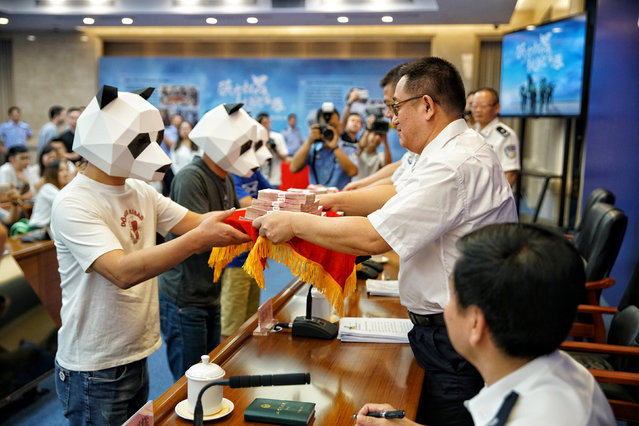 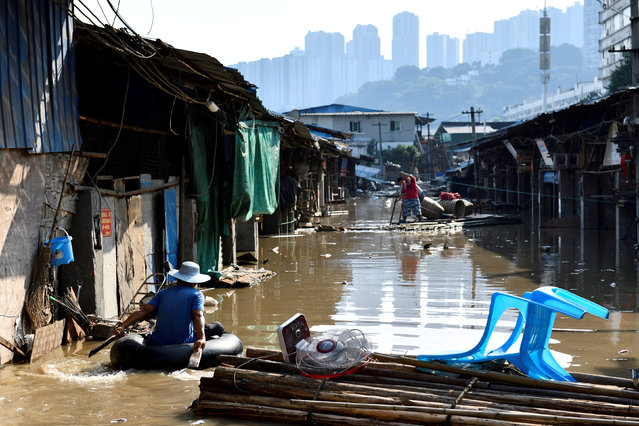 People move their belongings with makeshift rafts at a flooded bamboo and wood market in Chongqing, China July 13, 2018. (Photo by Reuters/China Stringer Network) 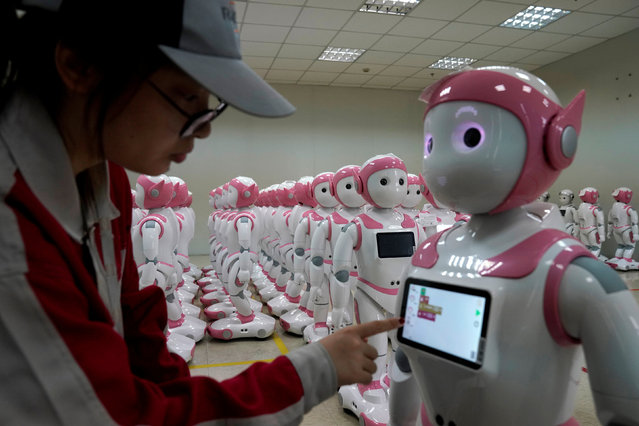 A worker puts finishing touches to an iPal social robot, designed by AvatarMind, at an assembly plant in Suzhou, Jiangsu province, China July 4, 2018. Designed to offer education, care and companionship to children and the elderly, the 3.5-feet tall humanoid robots come in two genders and can tell stories, take photos and deliver educational or promotional content. (Photo by Aly Song/Reuters) 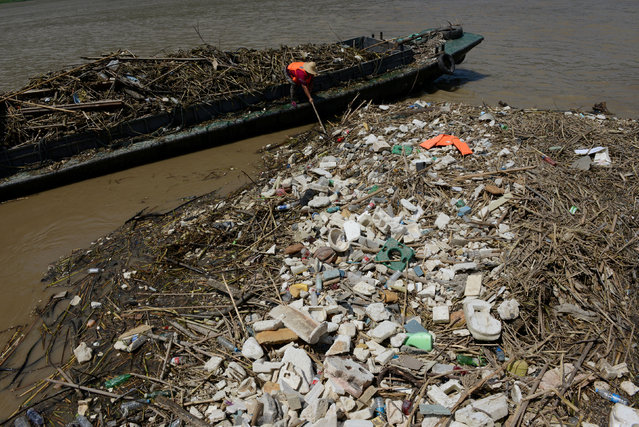 A worker collects garbage left on the bank of Yangtze River after floodwaters receded in Chongqing, China July 17, 2018. (Photo by Reuters/China Stringer Network) 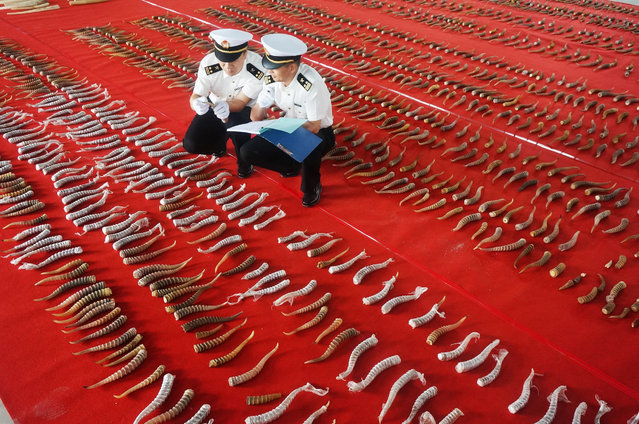 This undated photo taken in July 2018 shows customs officers checking on smuggled antelope horns in Harbin in China's northeastern Heilongjiang province. Chinese customs authorities said they seized 156 prehistoric mammoth tusks from a truck entering from Russia in one of the country's largest such hauls. (Photo by AFP Photo/Stringer) 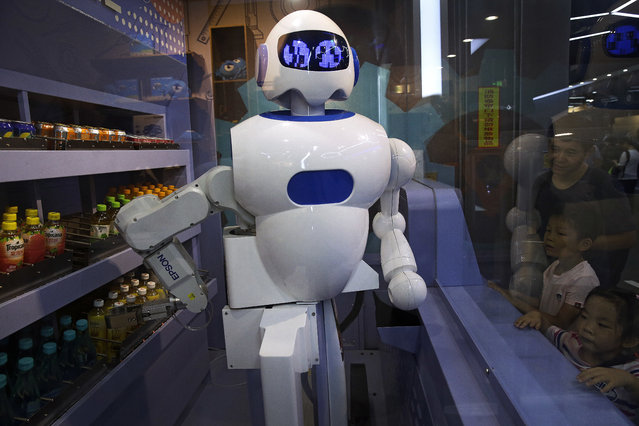 In this Saturday, July 21, 2018, photo, children watch a robot picking soft drink at a vending machine in the China Science and Technology Museum in Beijing. With U.S. President Donald Trump intensifying his rift with U.S. trading partners, economists are growing more doubtful that any deal that might benefit American workers and companies may be in sight. Instead, many analysts say they expect the Trump administration to impose increasingly more tariffs on China, Europe and other key U.S. trading partners. (Photo by Andy Wong/AP Photo) 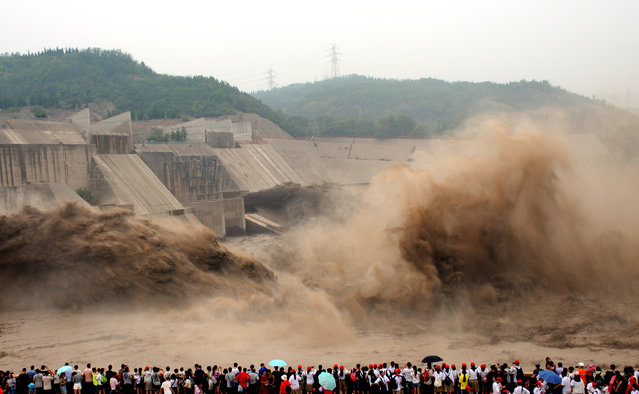 Aerial view of citizens enjoying cool moments at a water park on July 13, 2018 in Nanjing, Jiangsu Province of China. According to the Central Meteorological Observatory, temperatures are expected to top 35 degrees Celsius in the next three days in some regions in China. (Photo by Yang Bo/China News Service/VCG) 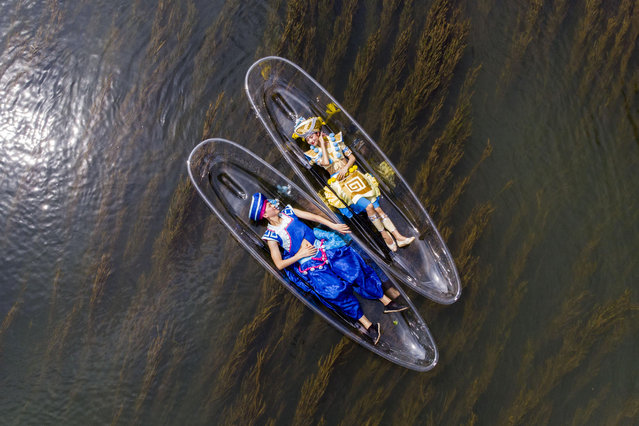