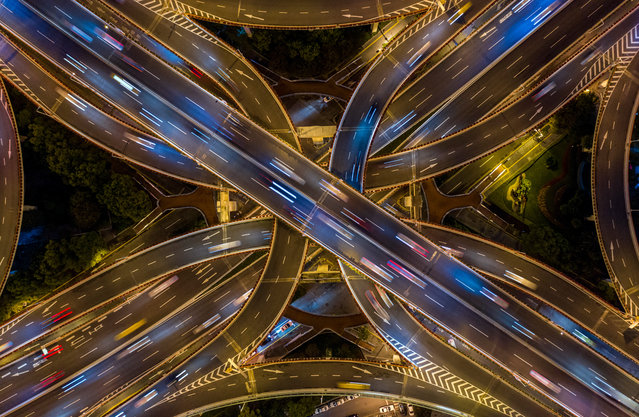 This aerial picture taken on the night of November 12, 2018 shows traffic on an elevated intersection in downtown Shanghai, China. (Photo by Johannes Eisele/AFP Photo) 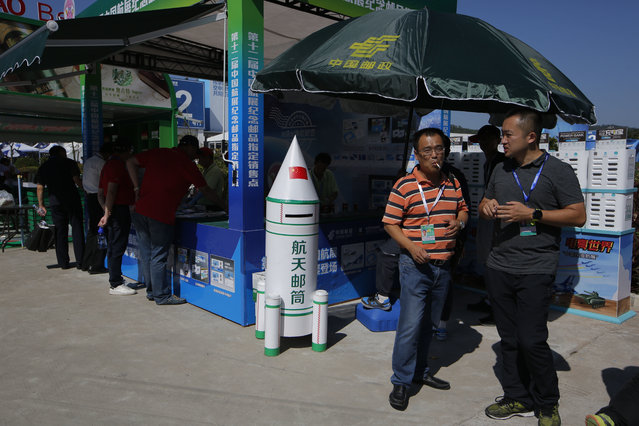 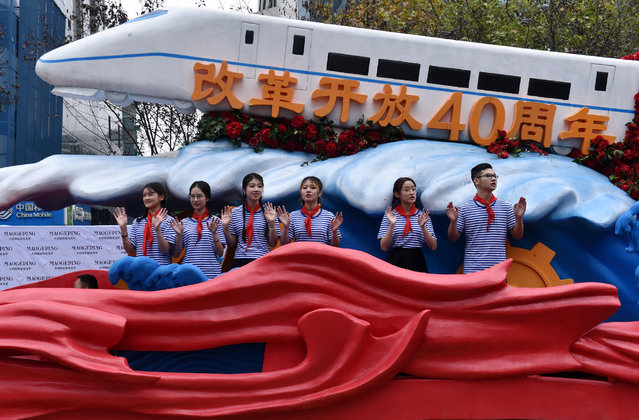 A float decorated with a high-speed train marks the 40th anniversary of China’s economic reform as part of a parade in Zhejiang province, Hangzhou, China on November 18, 2018. (Photo by Reuters/China Stringer Network) 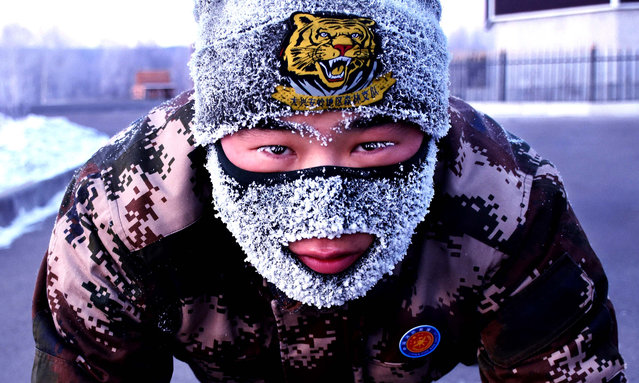 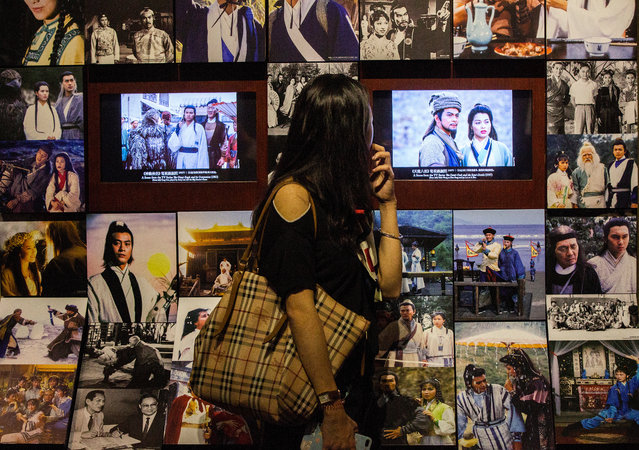 A member of the public looks a memorabilia relating to the life and times of Chinese literary giant Louis Cha Leung-yung, a Hong Kong martial arts novelist who recently passed away at the age of 94, at the Jin Yong Gallery, Hong Kong Heritage Museum, Sha Tin, New Territories, Hong Kong, China, 01 November 2018. Louis Cha died on 30 October 2018 after a prolonged illness. Also known by his pen name Jin Yong, he was the world’s most popular twentieth century Chinese writer. Louis Cha Leung-yung also founded the influential Ming Pao newspaper that still runs in Hong Kong to this day. (Photo by Alex Hofford/EPA/EFE) 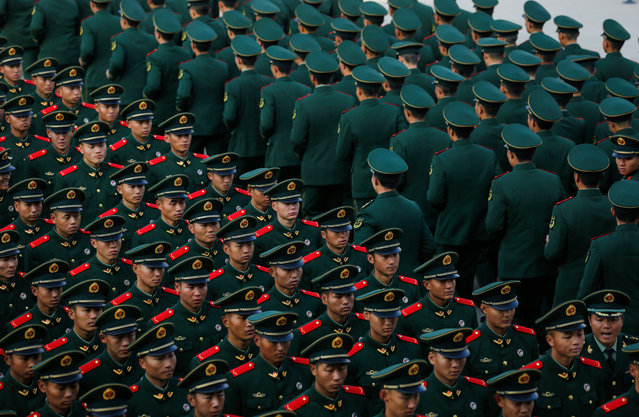 Newly recruited armed soldiers attend an inauguration ceremony on November 20, 2018 in Lanzhou, Gansu Province of China. A total of over one thousand armed soldiers began their duties on Tuesday after two months' training and study. (Photo by VCG/VCG via Getty Images) 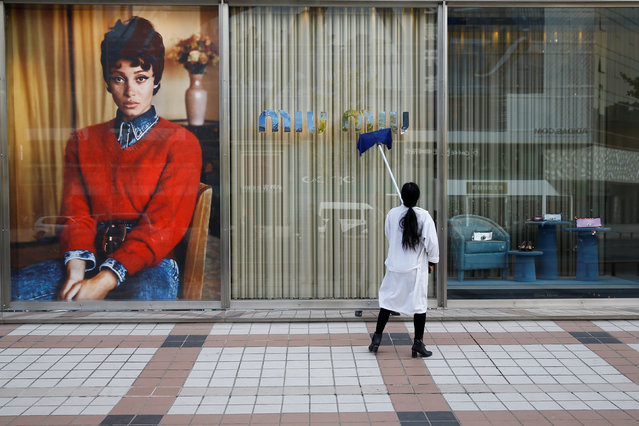 A woman cleans the shop window of a boutique of the Italian high fashion brand Miu Miu in Beijing, November 6, 2018. (Photo by Thomas Peter/Reuters) An electric delivery vehicle of Deppon Logistics drives past a banner with a government slogan in Beijing, November 6, 2018. (Photo by Thomas Peter/Reuters) 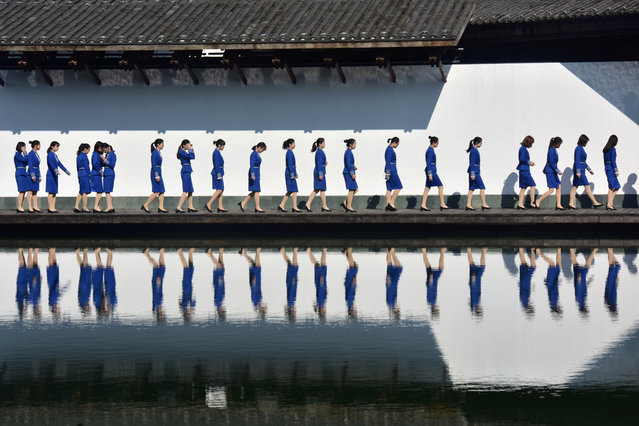 Attendants for the fifth World Internet Conference (WIC) are seen reflected in the water during a group photo session outside the venue, in Wuzhen town of Jiaxing, Zhejiang province, China on November 8, 2018. (Photo by Reuters/China Stringer Network) 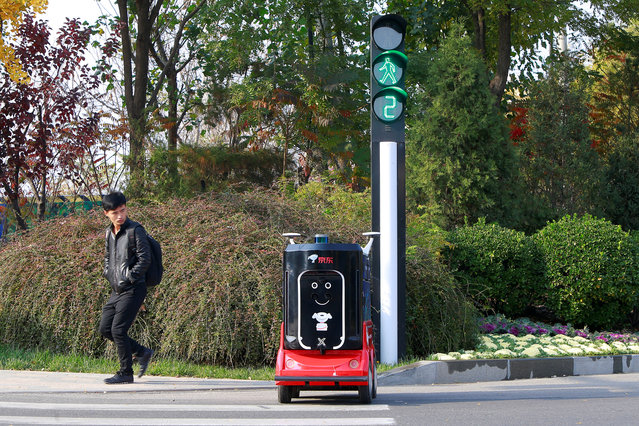 A man looks on as a JD.com driverless delivery robot crosses the road a day after the Singles Day shopping festival, in Tianjin, China on November 12, 2018. (Photo by Reuters/China Stringer Network) 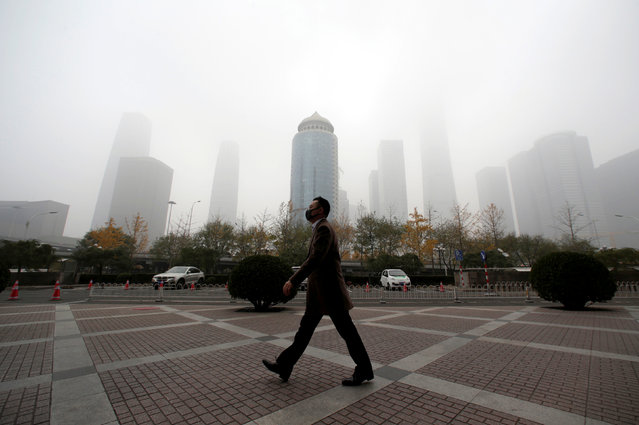 A man wearing a mask walks in the central business district on a polluted day after a yellow alert was issued for smog, in Beijing, China November 14, 2018. (Photo by Jason Lee/Reuters) 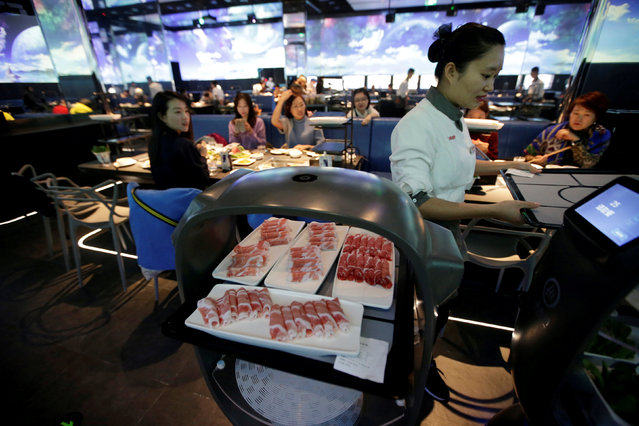 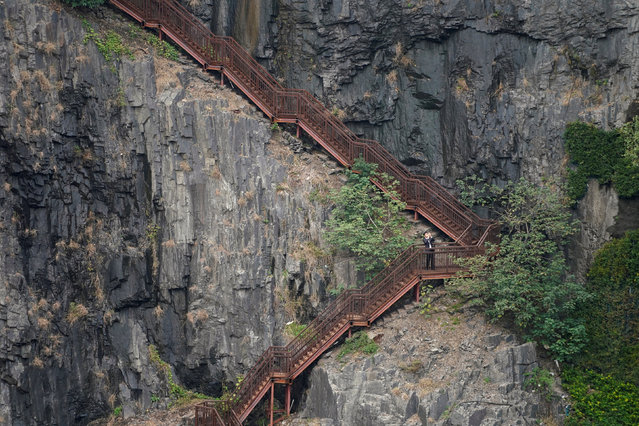 A man takes pictures from a staircase at the compound of the Intercontinental Shanghai Wonderland, a hotel built on the site of a former quarry, before its opening to the public, in Shanghai, China November 15, 2018. (Photo by Aly Song/Reuters) 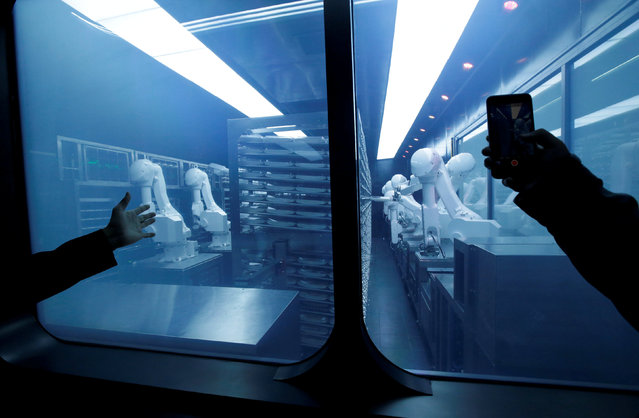 A customer takes a picture as robotic arms collect pre-packaged dishes from a cold storage, done according to the diners' orders, at Haidilao's new artificial intelligence hotpot restaurant in Beijing, China, November 14, 2018. (Photo by Jason Lee/Reuters) 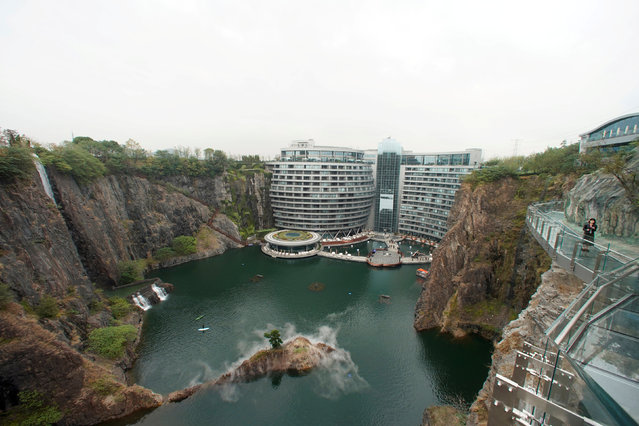 A general view of the Intercontinental Shanghai Wonderland, a hotel built on the site of a former quarry, before its opening to the public, in Shanghai, China November 15, 2018. (Photo by Aly Song/Reuters) 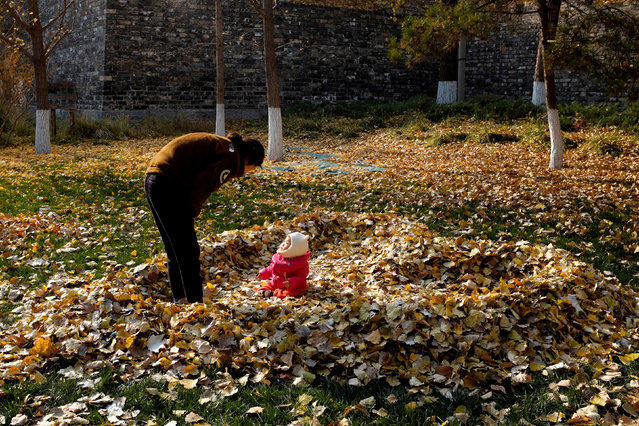 A mother looks at her daughter among the fallen leaves piled up in a shape of heart in Beijing, China, November 19, 2018. (Photo by Jason Lee/Reuters) 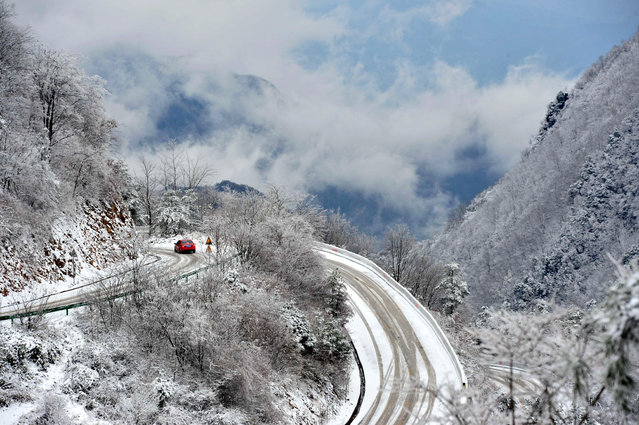 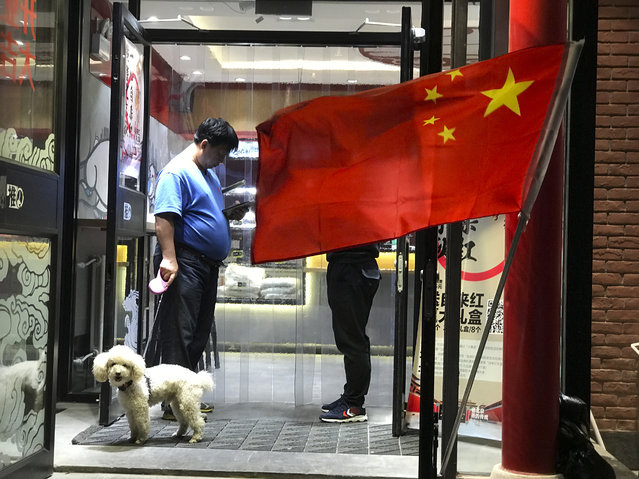 In this October 3, 2017, file photo, a man walks his dog as he leaves a restaurant flying the Chinese national flag in Beijing, China. A city in southwestern China has banned dog walking during the daytime and banished the pets entirely from parks, shopping centers, sports facilities, and other public spaces. (Photo by Ng Han Guan/AP Photo) 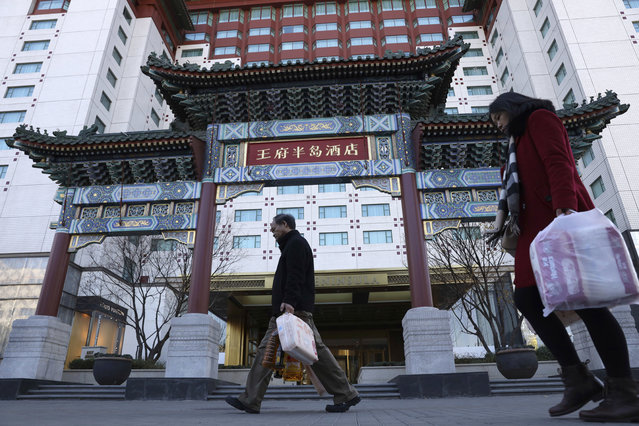 Residents passes by The Peninsula hotel which announced that it was investigating claims in an online video that supposedly showed the hotel cleaners using dirty towels to wipe cups and sinks in Beijing Friday, November 16, 2018. The Chinese tourism ministry asked authorities in Beijing, Shanghai and three provinces to investigate room cleaning at 14 major hotels after hidden camera video showed workers using used towels to clean cups and glasses and other questionable practices. (Photo by Ng Han Guan/AP Photo) 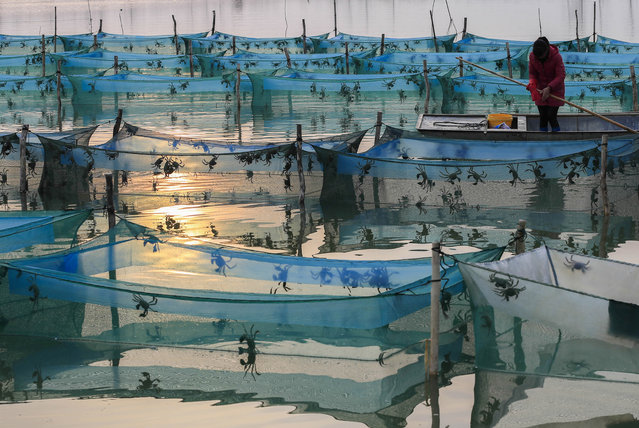