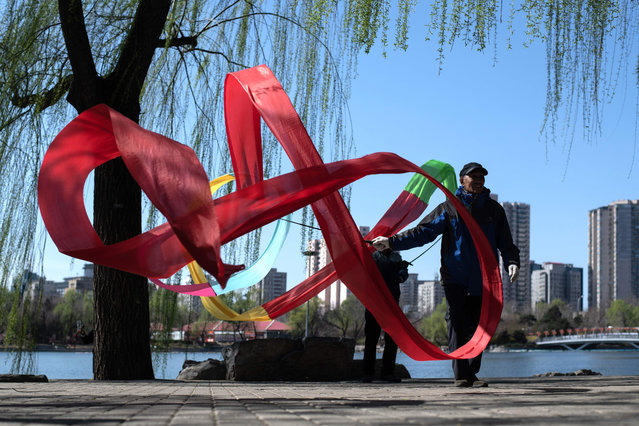 A man draws circles with a ribbon in Yuyuantan park in Beijing on March 21, 2019. (Photo by Fred Dufour/AFP Photo) 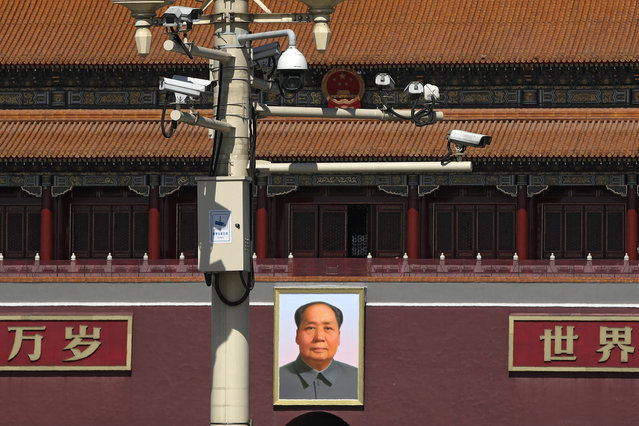 Surveillance cameras are mounted on a lamp post near the large portrait of Chinese leader Mao Zedong at the Tiananmen Gate in Beijing, Friday, March 15, 2019. Chinese Premier Li Keqiang on Friday denied Beijing tells its companies to spy abroad, refuting U.S. warnings that Chinese technology suppliers might be a security risk. (Photo by Andy Wong/AP Photo) 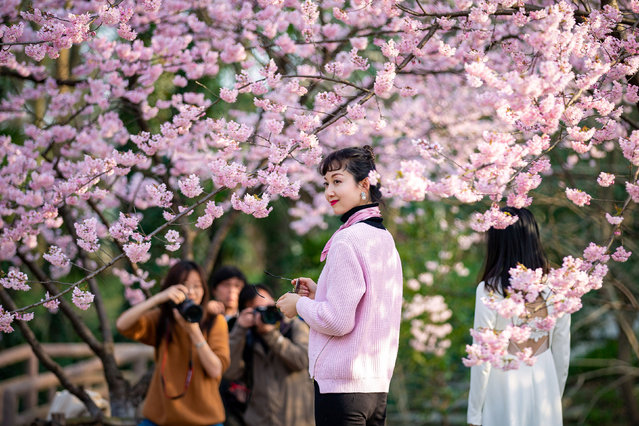 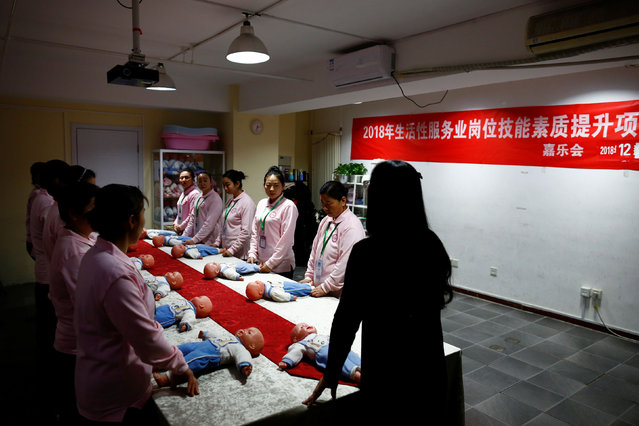 Students at Ayi University, a training program for domestic helpers, practice on baby dolls during a course teaching childcare in Beijing, China December 5, 2018. The training program teaches childcare, early education, housekeeping and other skills for domestic workers and is designed to meet the demand of China's middle class after the country scrapped the one-child policy. (Photo by Thomas Peter/Reuters) 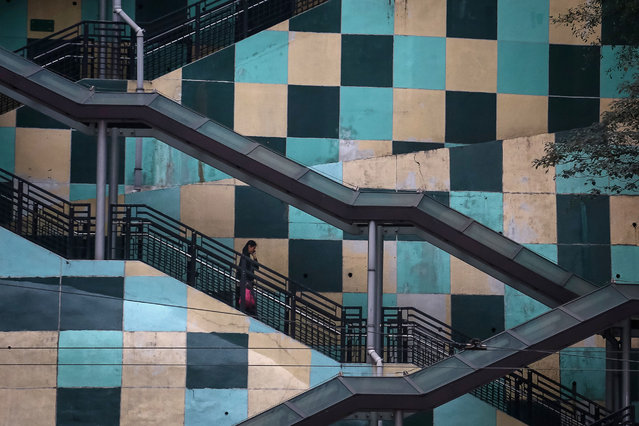 A woman walks down a set of stairs from a housing estate in Hong Kong on March 17, 2019. (Photo by Vivek Prakash/AFP Photo) 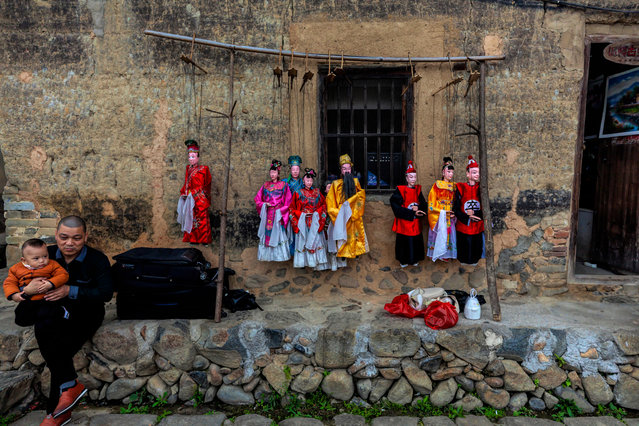 A man with child seats next to puppets on the string in front of Tulou house in Nanjing County, Fujian Province, China, 01 March 2019 (issued 20 March 2019). Fujian Tulou houses (tolou literal translation would be earthen) were built among rice, tea and tobacco fields and oldest one's date from 12th century. They are several stores high built in inward-looking circular or square shape. This layout was chosen for defense reasons as well as so that members of family or clan, who lived inside, could feel equal among each other’s. Bigger ones could accommodate up to 800 people so they were organized as a small fortified cities with school and temple in the central open courtyard, halls, storehouses, wells and living areas around them on the ground floor. Today most of the Tulou hoses are still inhabited by inheritors of original builders, and except farming the lands around them and trading, they are opened to tourists, so most of the Tulou’s can be visited. In 2008, 46 Fujian Tulou sites were inscribed by UNESCO as World Heritage Site.Residents of Tulou houses are happy to tell and explain to visitors a story that in 1980’s American CIA thought Tulou houses were nuclear silos when they saw them from the satellite, so they send a man pretending to be a photographer with his wife who was Chinese origin to inspect them. Story is told and heard with a smile on faces from people on the both sides, showing their doubt in the story and questioning if it’s just a tourist bait fairy tale. (Photo by Aleksandar Plavevski/EPA/EFE) 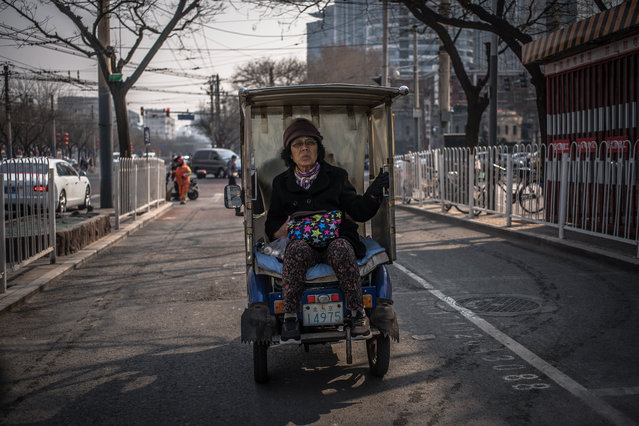 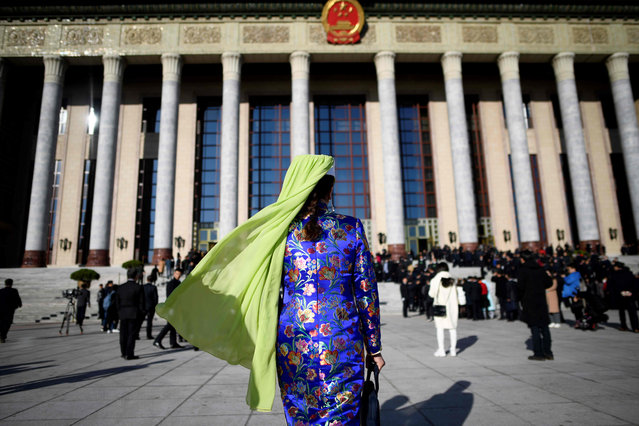 An ethnic minority delegate arrives for the third plenary meeting of the second session of the 13th National People's Congress (NPC) at the Great Hall of the People in Beijing on March 12, 2019. (Photo by Wang Zhao/AFP Photo) 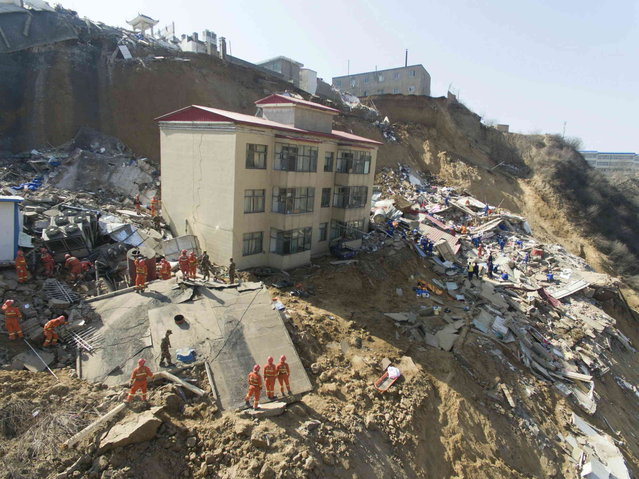 Rescue workers search the site of a landslide that caused buildings to collapse in Xiangning county in northern China's Shanxi province Saturday, March 16, 2019. Hundreds of police, firefighters and medical personnel joined rescue efforts on Saturday after a landslide in northern China knocked down several buildings, killing some and leaving others missing. (Photo by Chinatopix via AP Photo) 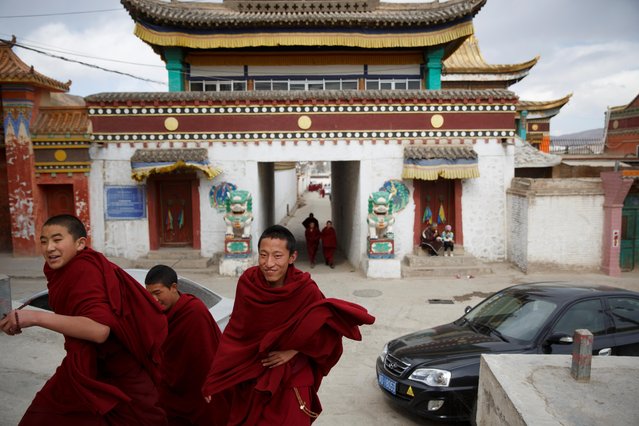 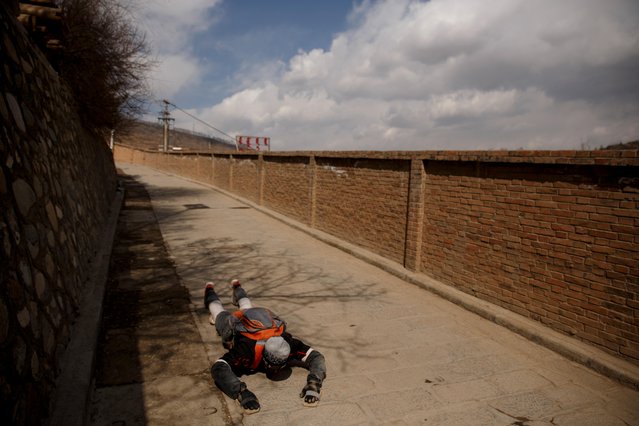 A Tibetan man prostrates himself in prayer as he circles the Tibetan Buddhist Kumbum Monastery outside Xining, Qinghai province, China on March 10, 2019. (Photo by Thomas Peter/Reuters) 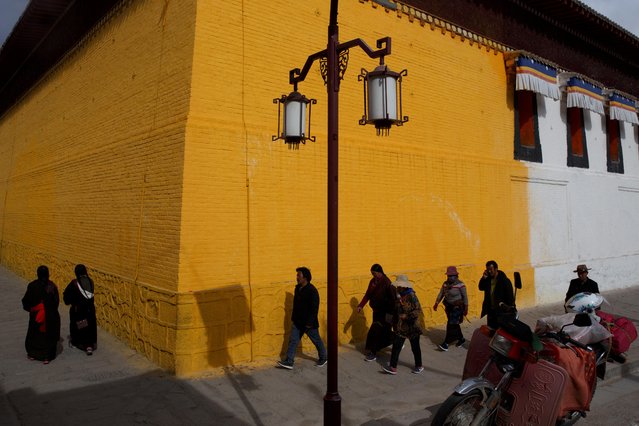 Tibetans circle a temple as part of a prayer ritual at Rongwo Monastery in the largely ethnic Tibetan town of Rebkong, Qinghai province, China on March 9, 2019. (Photo by Thomas Peter/Reuters) 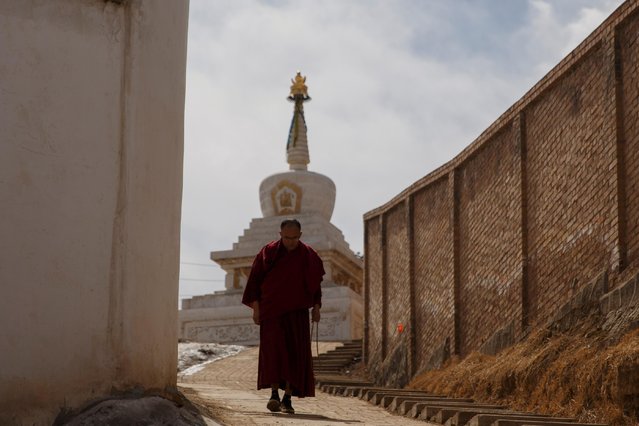 A monk circles the Tibetan Buddhist Kumbum Monastery during a prayer ritual outside Xining, Qinghai province, China on March 10, 2019. (Photo by Thomas Peter/Reuters) 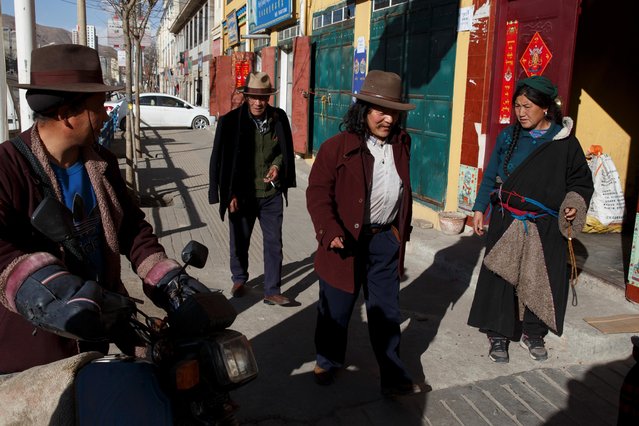 Tibetans walk in a street near Rongwo Monastery in the largely ethnic Tibetan town of Rebkong, Qinghai province, China on March 9, 2019. (Photo by Thomas Peter/Reuters) 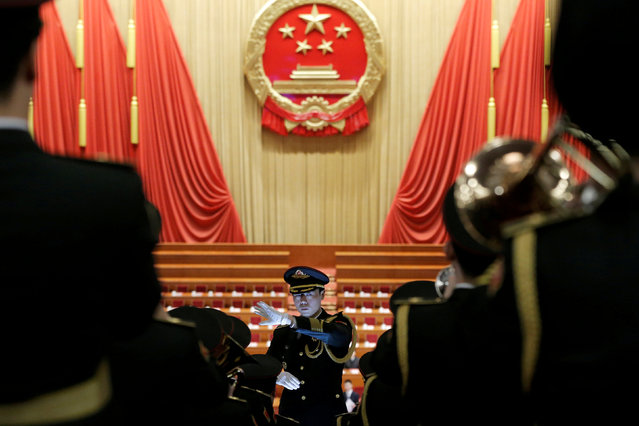 Military band members rehearse before the closing session of the National People's Congress (NPC) at the Great Hall of the People in Beijing, China March 15, 2019. (Photo by Thomas Peter/Reuters) 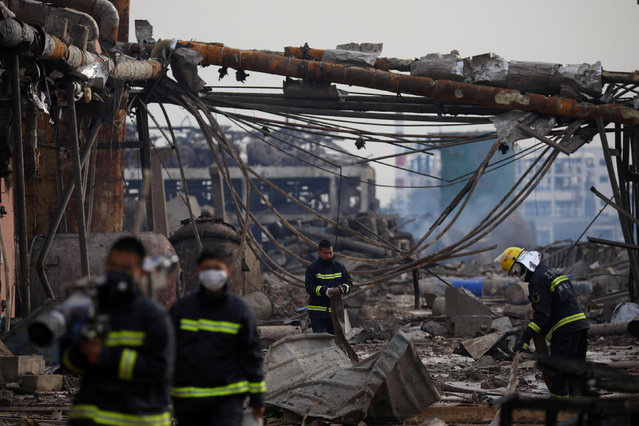 Firefighters work on the site following an explosion at a pesticide plant owned by Tianjiayi Chemical, in Xiangshui county, Yancheng, Jiangsu province, China March 22, 2019. (Photo by Yang Bo/CNS via Reuters) 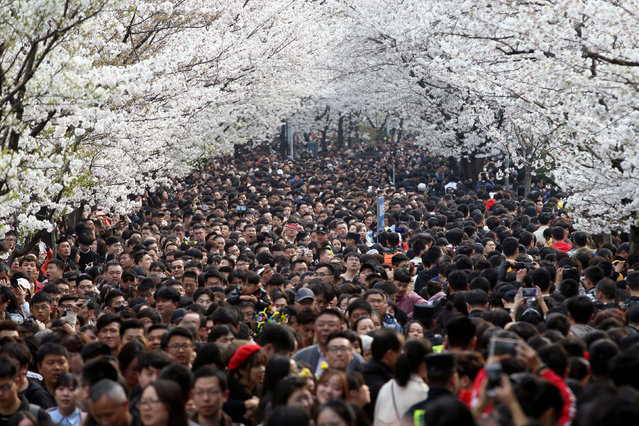 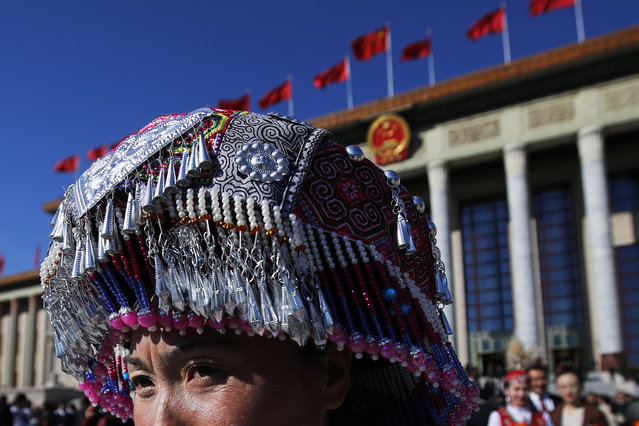 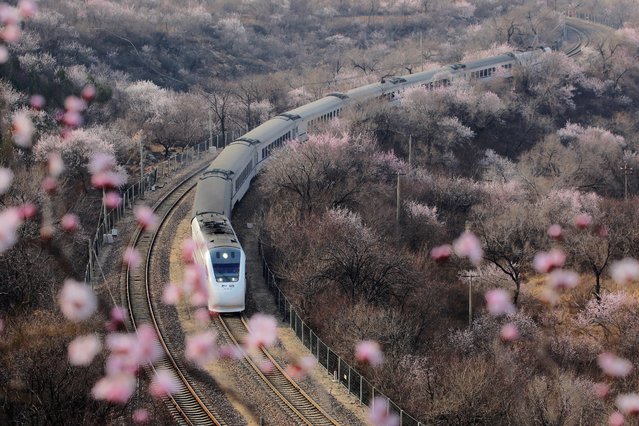 A high-speed bullet train passes through peach blossoms near Juyonguan of the Great Wall in Changping district, Beijing, China on March 18. 2019. (Photo by Ding Bangxue/Qianlong.com via Reuters) 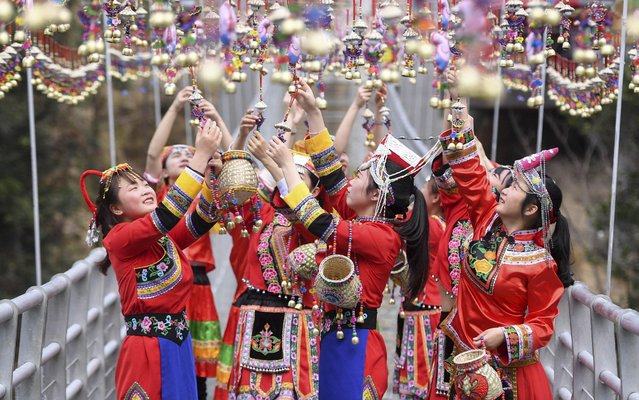