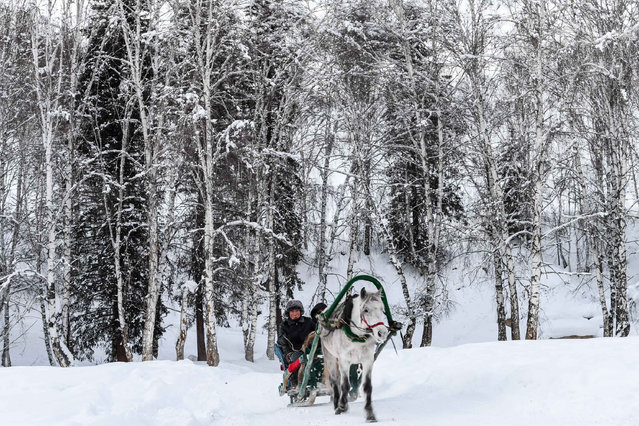 Tourists take a ride on a horse-drawn sleigh at the Hom scenic area of Kanas, in China’s Xinjiang Uygur Autonomous Region on December 25, 2018. (Photo by Xinhua News Agency/Barcroft Images) 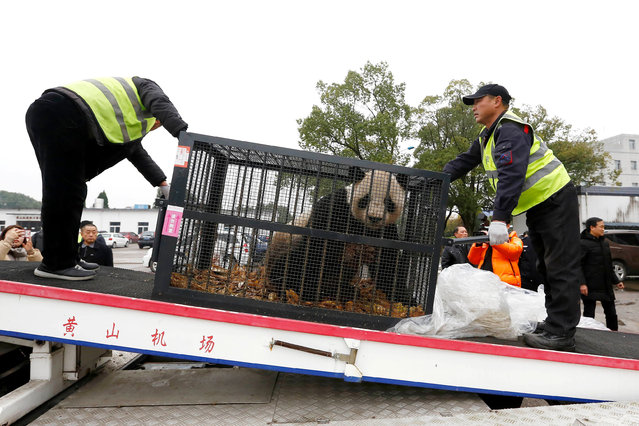 Staff members carry cages with the Giant pandas “Hualong” and “Huihui” from Sichuan's China Conservation and Research Center for the Giant Panda at a panda theme park in Huangshan city, east China's Anhui province on December 20, 2018. (Photo by Imaginechina/Rex Fatures/Shutterstock) 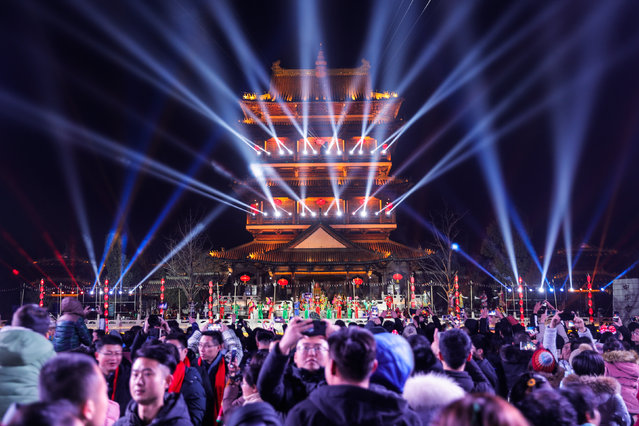 A light show is seen to welcome the New Year's Day on December 31, 2018 in Zaozhuang, Shandong Province of China. (Photo by VCG/VCG via Getty Images) 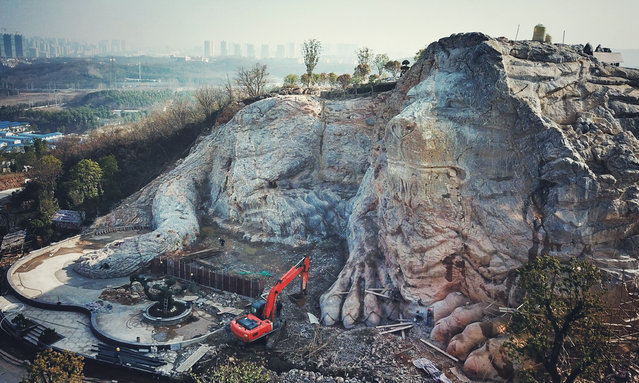 Aerial view of a stone lion sculpture built beside a honeycomb hotel in the Laoshan mountain area on December 18, 2018 in Nanjing, Jiangsu Province of China. The hotel built beside a cliff looks like an alien base whose design inspiration comes from honeycomb. 100 sculptors spent about half a year completing the construction of two 30-metre-high stone lion sculptures beside the hotel in Nanjing. (Photo by Cui Xiao/VCG via Getty Images) 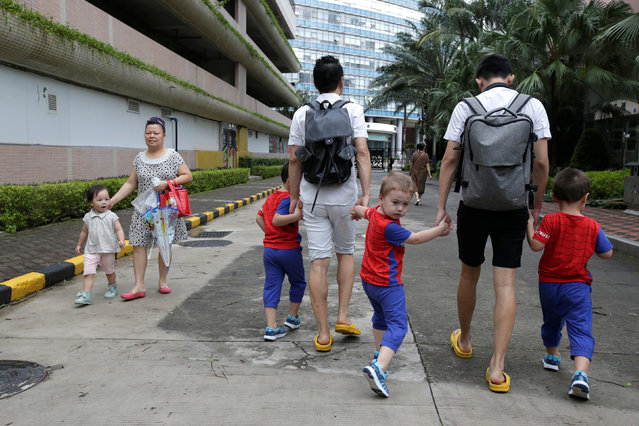 A girl looks at An Hui (L) and his partner Ye Jianbin walking with their sons, An Zhizhong, An Zhiya and An Zhifei at a residential community in Shenzhen, Guangdong province, China September 17, 2018. The triplets were conceived with the help of a German egg donor. (Photo by Jason Lee/Reuters) 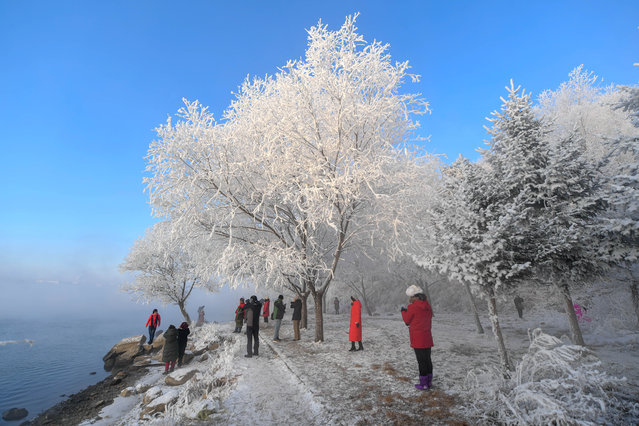 Tourists gather on the banks of Songhuajiang River pn Jilin, China to take in the rime-clad scene on December 11, 2018. Rime forms on cold objects by the rapid freezing of water vapour in cloud or fog. (Photo by Zhang Nan/Xinhua News Agencya/Barcroft Images) 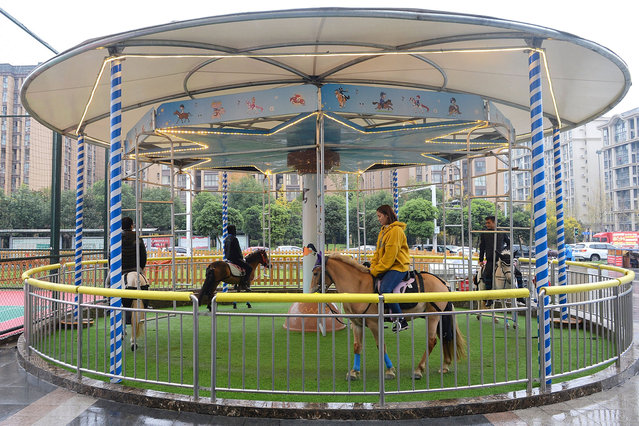 A carousel with real horses is seen at the Shuangliu Wanda Plaza shopping center in Chengdu, capital of SW China's Sichuan Province on November 19, 2018. It takes 50 yuan (around $7.25) for a four-minute ride. (Photo by Wang Xiao/Chengdu Economic Daily via Reuters) 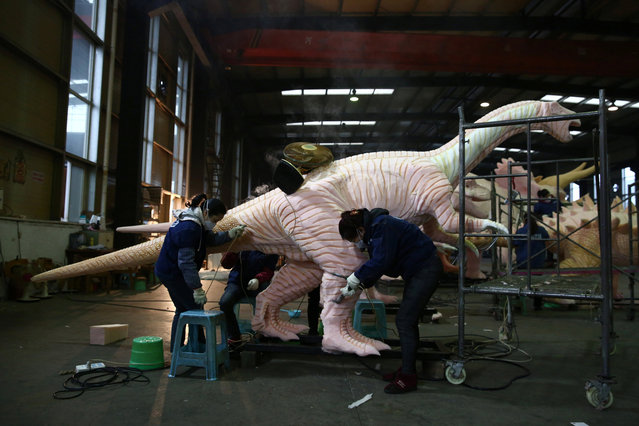 This life-like and inexpensive dinosaur was produced in the city of Zigong in southwest China on December 9, 2018, which produces over half of the world's market of the automated creatures. (Photo by Reuters/China Daily) 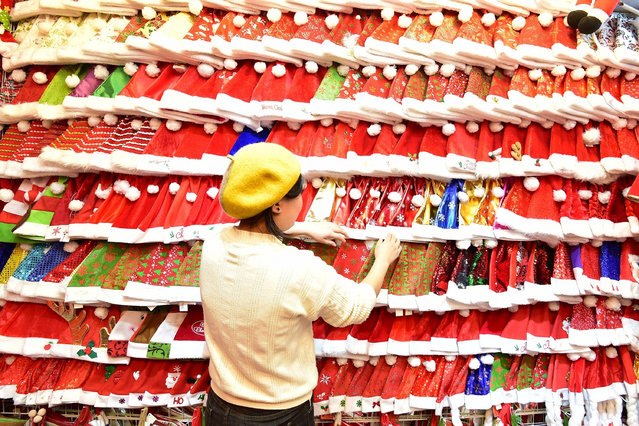 A vendor arranges Christmas hats on display for sale at the Yiwu International Trade City ahead of Christmas on December 17, 2018 in Jinhua, Zhejiang Province of China. (Photo by Lyu Bin/VCG via Getty Images) 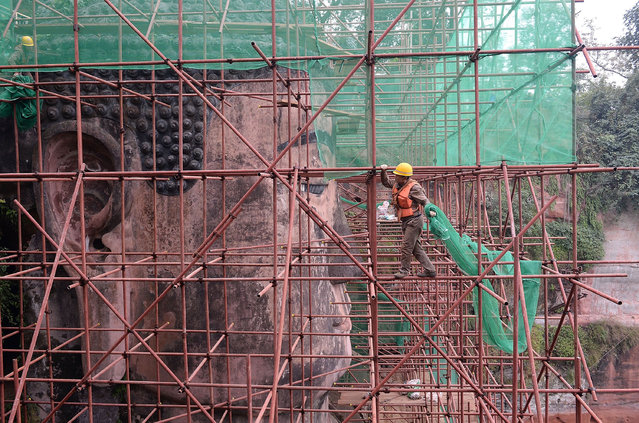 The Leshan Giant Buddha is covered with scaffolding for a restoration project to fix large cracks across its chest and abdomen in Leshan city, Sichuan province, China on December 13, 2018. (Photo by Imaginechina/Rex Features/Shutterstock) 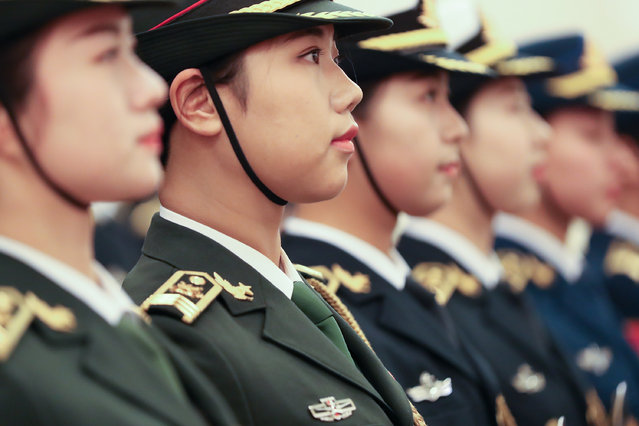 The guard of honour of the People's Liberation Army during the welcoming ceremony for the official visit of German President Frank-Walter Steinmeier at the invitation of Chinese President Xi Jinping at The Great Hall Of The People on December 10, 2018 in Beijing, China. (Photo by Andrea Verdelli/Getty Images) 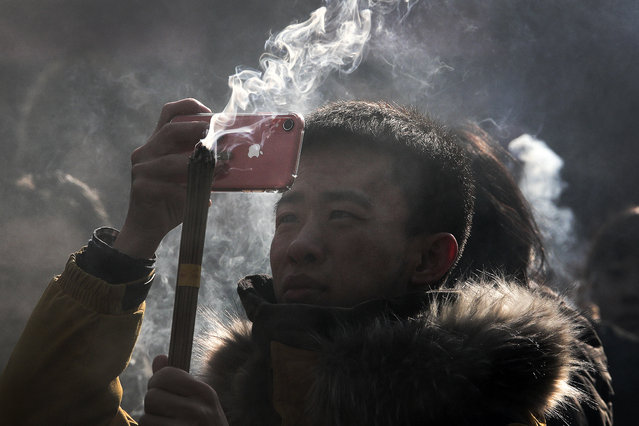 In this Tuesday, January 1, 2019, photo, a Chinese man uses iPhone to take picture as he prays for health and fortune on the first day of the New Year at Yonghegong Lama Temple in Beijing. Apple acknowledged that demand for iPhones is sagging, a warning likely to roil financial markets. It confirmed investor fears that the company's most profitable product has lost some of its luster. CEO Tim Cook said that iPhone sales fell well below projections, especially in China, amid a trans-Pacific trade war and concern over global economic weakness. (Photo by Andy Wong/AP Photo) 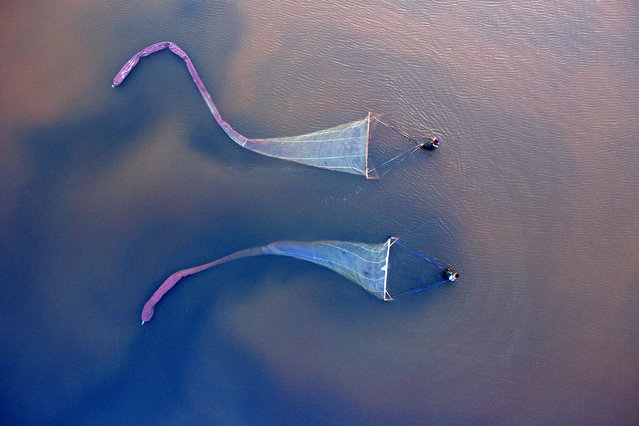 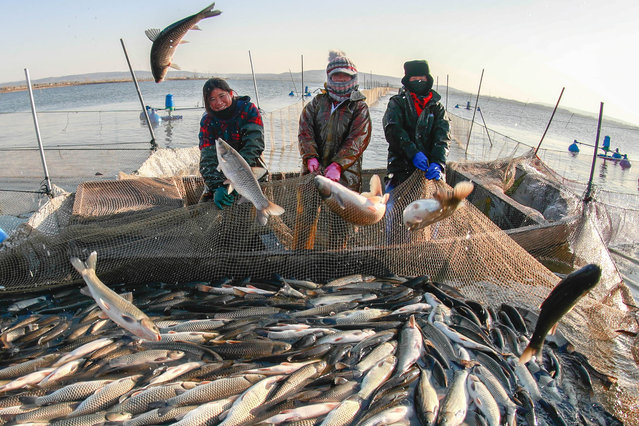 Fishermen catch fish at Mao'er lake at the start of winter fishing season which is a local custom to welcome the new year on December 29, 2018 in Huaian, Jiangsu Province of China. (Photo by VCG/VCG via Getty Images) 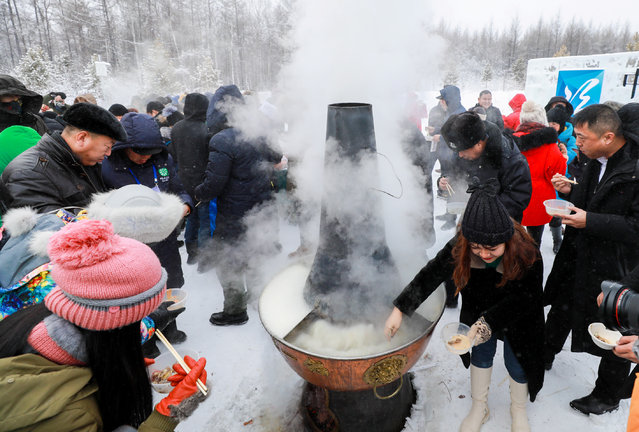 Visitors enjoy a hotpot in subzero temperatures at the opening ceremony of a “Pole of Cold” festival in Genhe, Inner Mongolia, China on December 25, 2018. (Photo by Reuters/China Stringer Network) 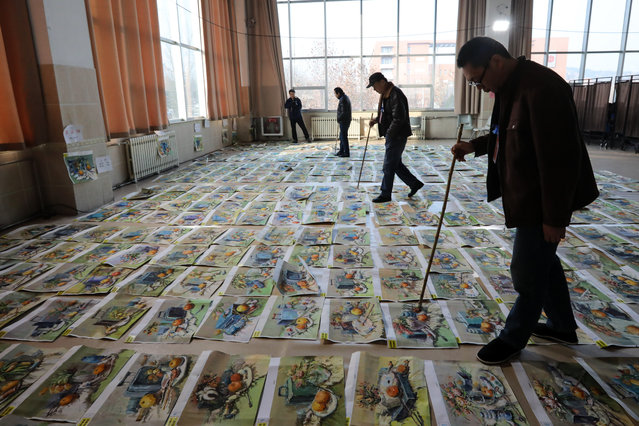 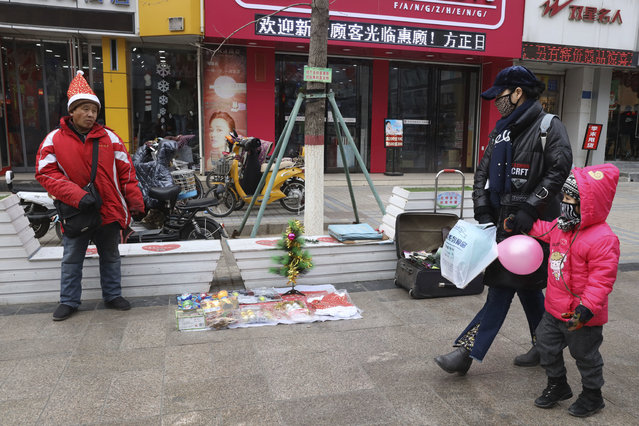 In this Saturday, December 22, 2018, photo, a man sells Christmas decorations on a street of Zhangjiakou in northern China's Hebei province. At least four Chinese cities and one county have restricted Christmas celebrations this year. Churches in another city have been warned to keep minors away from Christmas, and at least ten schools nationwide have curtailed Christmas on campus, The Associated Press has found. (Photo by Ng Han Guan/AP Photo) 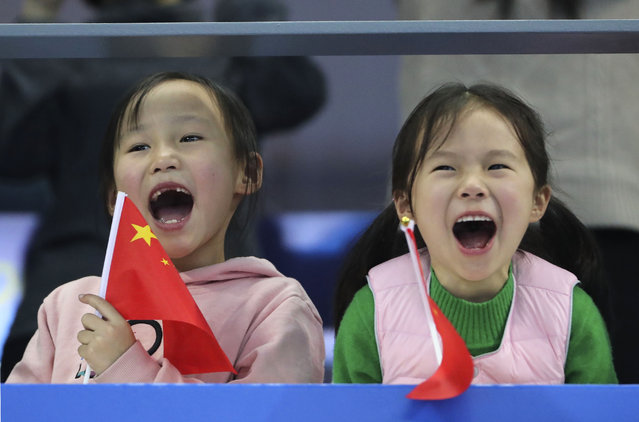