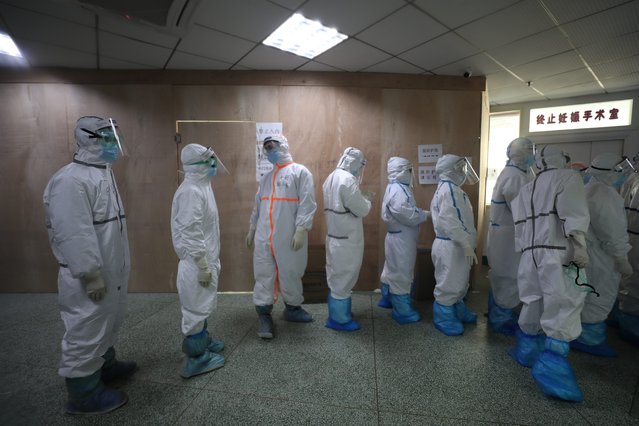 Medical staff in isolation gowns prepare to enter the isolation zone in a hospital designated for COVID-19 patients in Wuhan in central China's Hubei province Tuesday, February 25, 2020. Doctors and nurses of other disciplines in the hospital were all assigned to respiratory patients upon the official announcement of the outbreak, and 51 of them contracted SARS-COV-2 during that time due to lack of protection. Their first reinforcement of 138 medical personnel came to rescue on Jan. 26. (Photo by Feature China/Barcroft Media via Getty Images) 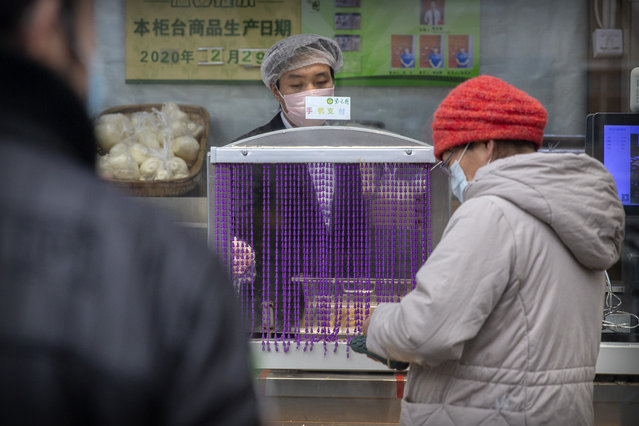 A clerk wears a face mask as he waits for a customer to pay at a bakery in Beijing, Saturday, February 29, 2020. The coronavirus outbreak's impact on the world economy grew more alarming on Saturday, even as President Donald Trump denounced criticisms of his response to the threat as a “hoax” cooked up by his political enemies. (Photo by Mark Schiefelbein/AP Photo) 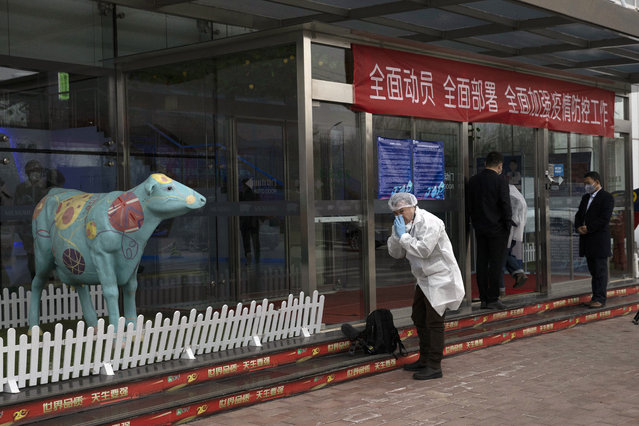 A foreign journalist prepares to wear his mask before entering the office at the Mengniu dairy factory in Beijing on Thursday, February 27, 2020. The state-owned dairy company Mengniu has suffered 20% sales decrease since the beginning of February due to the COVID-19 outbreak, said a Communist Party official overseeing the company during a tour of the plant organized by the State Council Information Office for foreign media. (Photo by Ng Han Guan/AP Photo) 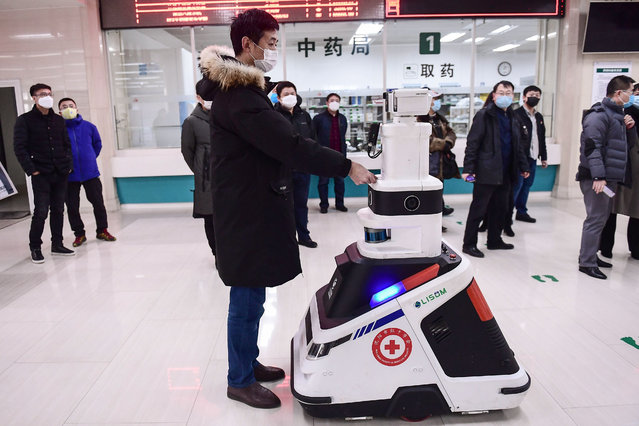 This photo taken on February 26, 2020 shows a patrol robot – used to check temperatures, identities and disinfect people – checking the identity of a visitor at a hospital in Shenyang in China's northeastern Liaoning province. The hospital uses the robot to reduce the pressure on front-line medical staff and to avoid cross infections from the COVID-19 coronavirus. (Photo by AFP Photo/China Stringer Network) 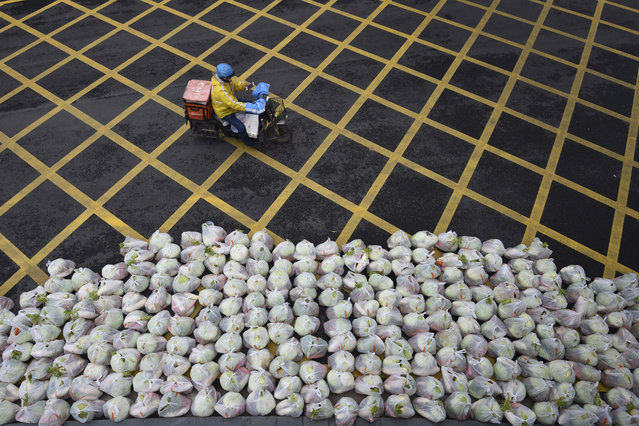 A man rides past bags of vegetables being prepared for delivery on an almost empty street in Wuhan, in China's central Hubei province on February 26, 2020. China on February 26 reported 52 new coronavirus deaths, the lowest figure in more than three weeks, bringing the death toll to 2,715. All the new deaths were in the outbreak epicentre Hubei province, which accounted for 401 of the 406 new infections reported on February 26, the National Health Commission said. (Photo by AFP Photo/China Stringer Network) 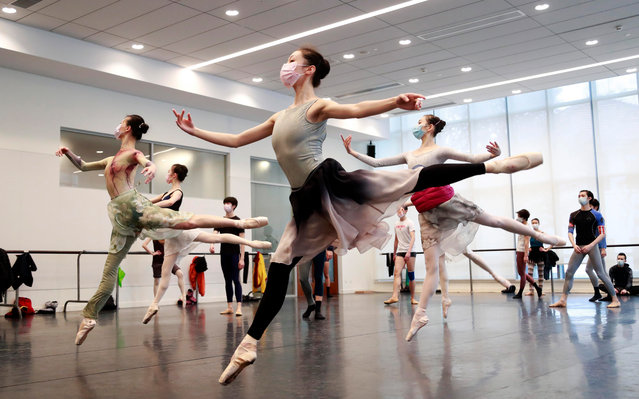 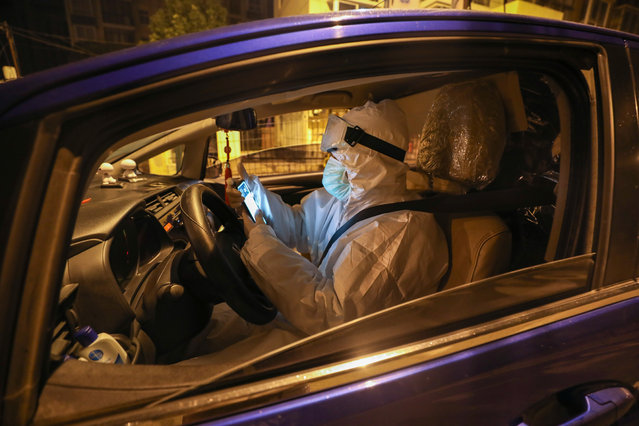 A volunteer checks their navigation app while helping a local couple moving into the Maternal and Child Hospital of Hubei Province for an upcoming childbirth in Wuhan, Hubei province, China, 22 February 2020 (issued 28 February 2020). A group of volunteers is working in the city to bring essential medical services non-COVID patients. (Photo by Yuan Zheng/EPA/EFE) 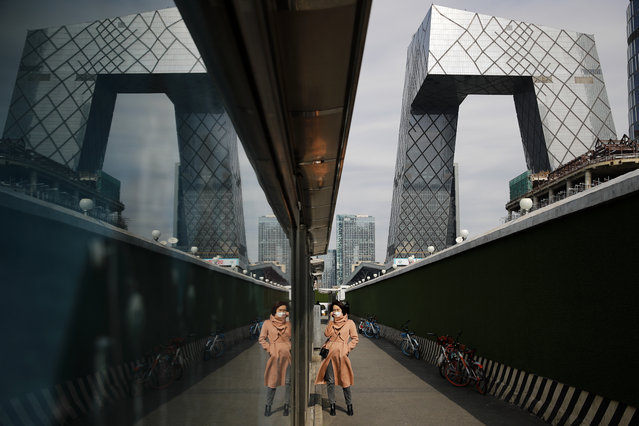 A woman wearing a protective face mask talks on her phone at the Central Business District in Beijing, Monday, March 2, 2020. (Photo by Andy Wong/AP Photo) 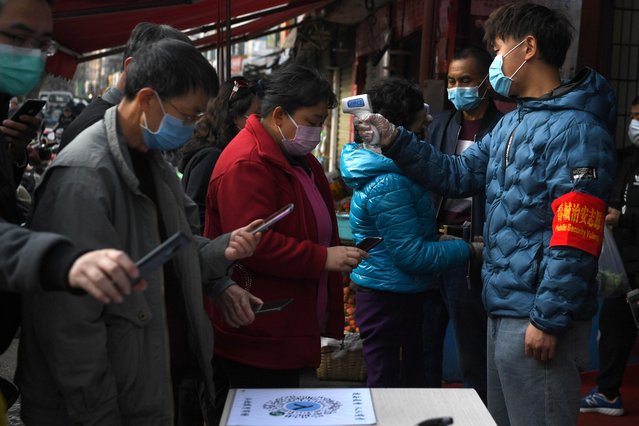 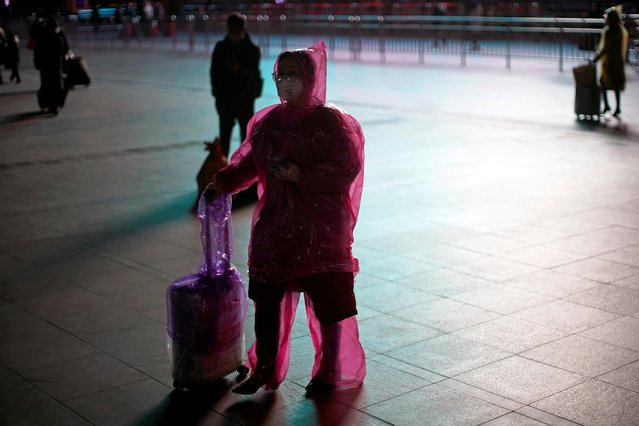 A woman wears a face mask and plastic raincoat as a protection from coronavirus at Shanghai railway station, in Shanghai, China on February 17, 2020. (Photo by Aly Song/Reuters) 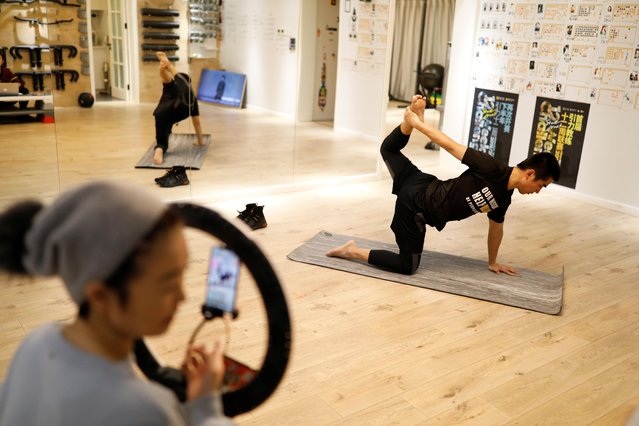 Trainer Wang Kai teaches a class that is being livestreamed at a gym, as the country is hit by an outbreak of the new coronavirus, in Beijing, China on February 14, 2020. (Photo by Carlos Garcia Rawlins/Reuters) 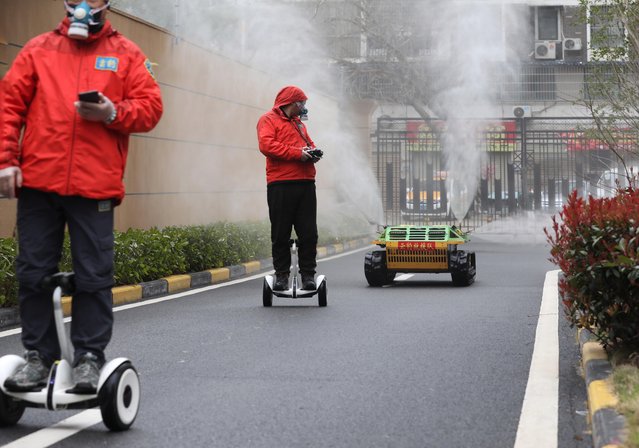 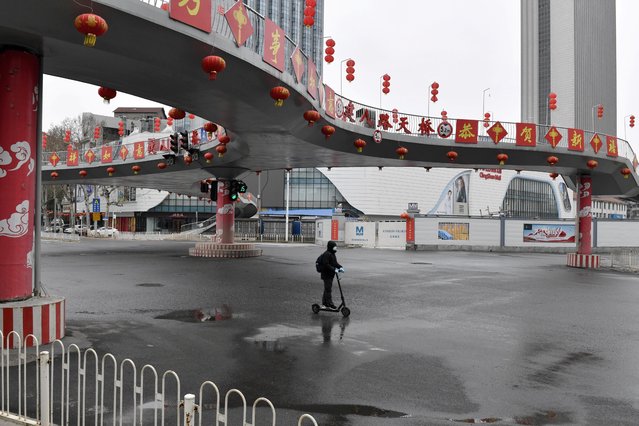 A man wearing a face mask rides a kick scooter through an empty intersection in Wuhan, China on March 3, 2020. (Photo by Reuters/China Stringer Network) 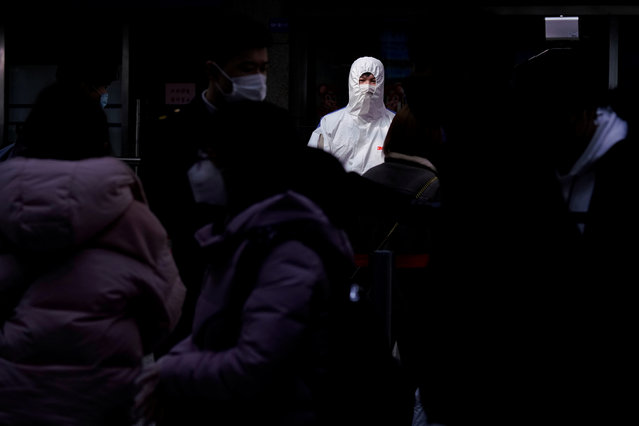 Passengers wearing masks are seen arrival at the Shanghai railway station in Shanghai, China, as the country is hit by an outbreak of a new coronavirus, February 27, 2020. (Photo by Aly Song/Reuters) 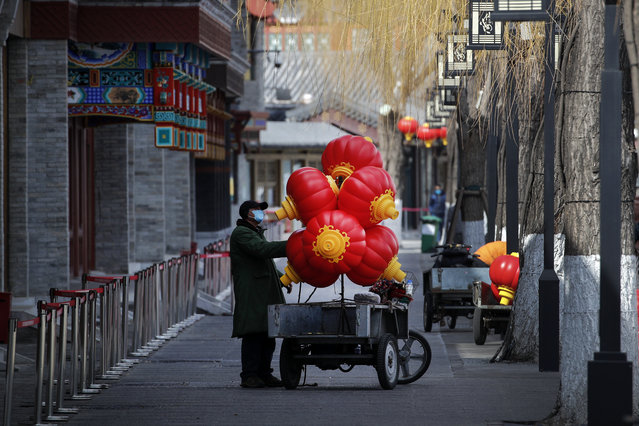 A worker wearing a protective face mask places lanterns on his cart near the closed restaurants along the Houhai Lake, a usually popular tourist spot before the coronavirus outbreak in Beijing, Sunday, March 1, 2020. Amid fears about where the next outbreak of a fast-spreading new virus would appear, infections and deaths continued to rise across the globe Sunday, emptying streets of tourists and workers, shaking economies and rewriting the realities of daily life. (Photo by Andy Wong/AP Photo) 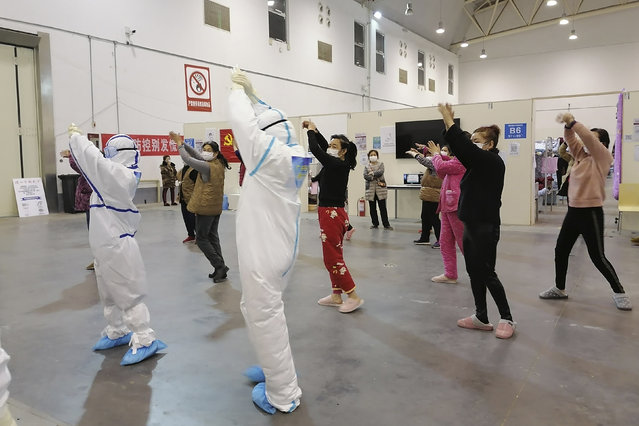 In this February 18, 2020, photo released by Zhang Junjian, medical workers lead patients in exercises at the Wuhan Living Room Temporary hospital in Wuhan in central China's Hubei province. The hospital is the largest of 16 temporary hospitals set up in gyms and other locations to handle an overflow of patients and try to stem the spread of the coronavirus by separating them from the rest of the city's 11-million inhabitants. (Photo by Zhang Junjian via AP Photo) 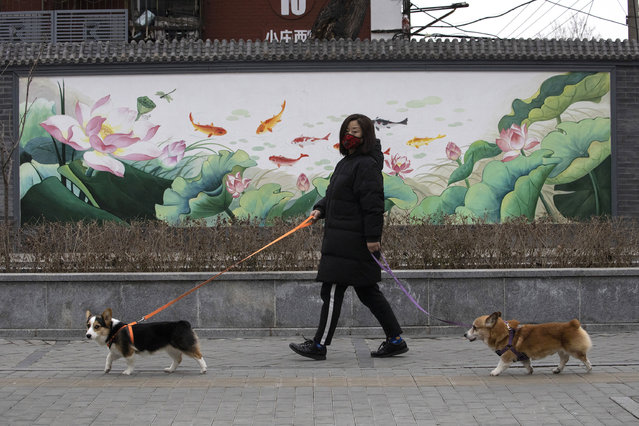 In this February 25, 2020, file photo, a resident wearing mask walks her dogs in Beijing. Pet cats and dogs cannot pass the new coronavirus on to humans, but they can test positive for low levels of the pathogen if they catch it from their owners. That's the conclusion of Hong Kong's Agriculture, Fisheries and Conservation Department after a dog in quarantine tested weak positive for the virus Feb. 27, Feb. 28 and March 2, using the canine's nasal and oral cavity samples. (Photo by Ng Han Guan/AP Photo/File) 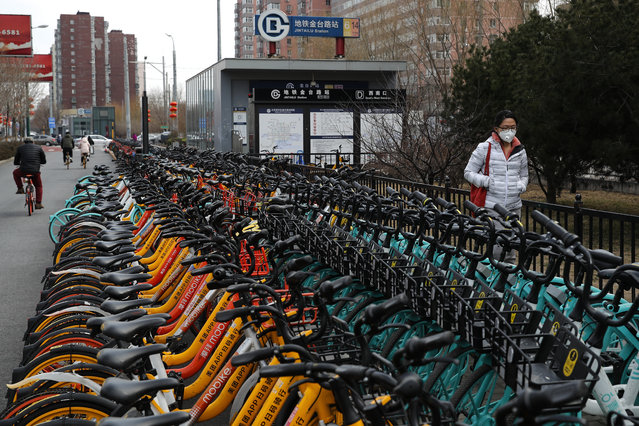 A woman wearing a protective face mask walks by rows of bicycles from bike-sharing companies parked outside a subway station in Beijing, Monday, March 2, 2020. China's manufacturing plunged in February as anti-virus controls shut down much of the world's second-largest economy, but companies are confident activity will revive following government stimulus efforts, according to two surveys. (Photo by Andy Wong/AP Photo) 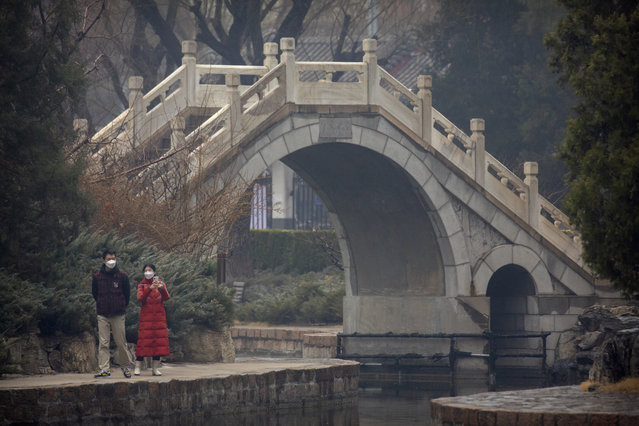 A couple wear face masks as they walk at a public park in Beijing, Saturday, February 29, 2020. (Photo by Mark Schiefelbein/AP Photo) 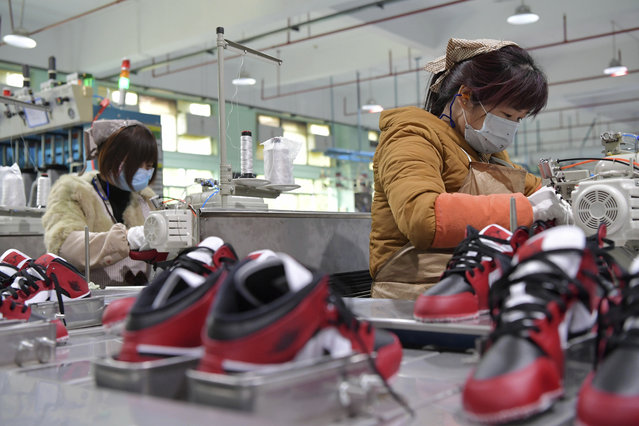 In this photo taken on February 22, 2020 and released by Xinhua News Agency, workers wear mask as they manufacture shoes at a factory in the town of Xiangtang, Nanchang county in eastern China's Jiangxi Province. Factories in China that make the world's smartphones, toys and other consumer goods are trying to protect their employees from a virus outbreak as they resume production. Manufacturers are buying masks by the thousands and jugs of disinfectant. The ruling Communist Party has told local officials to help reopen factories that were idled by the most intensive anti-disease controls ever imposed. (Photo by Peng Zhaozhi/Xinhua via AP Photo) 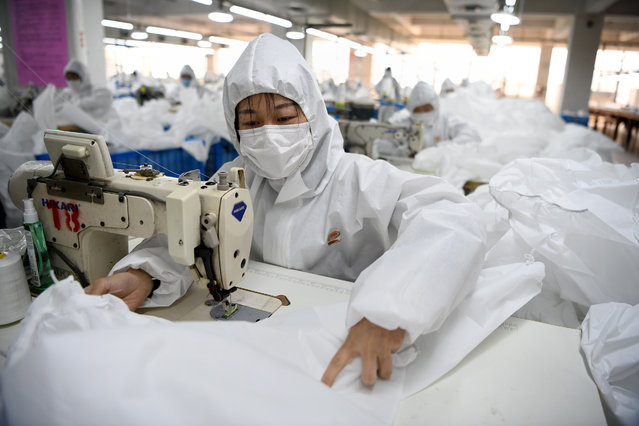 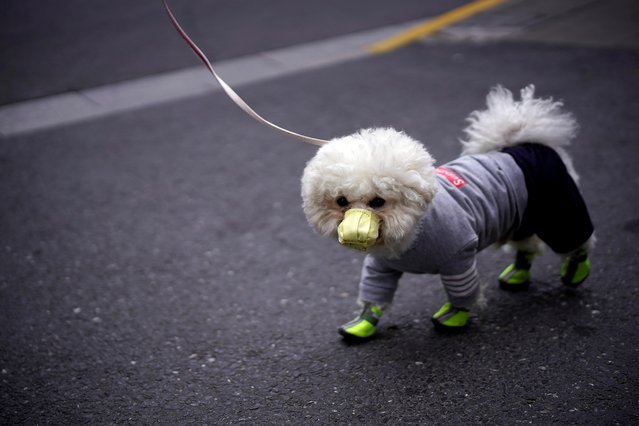 A dog wearing face mask is seen on a street as the country is hit by an outbreak of the novel coronavirus, in Shanghai, China on March 2, 2020. (Photo by Aly Song/Reuters)
Edit Del
11 Mar 2020 00:01:00, post received 0 comments
Publication archive:
←   →
Popular tags:
All tags
Last searches: