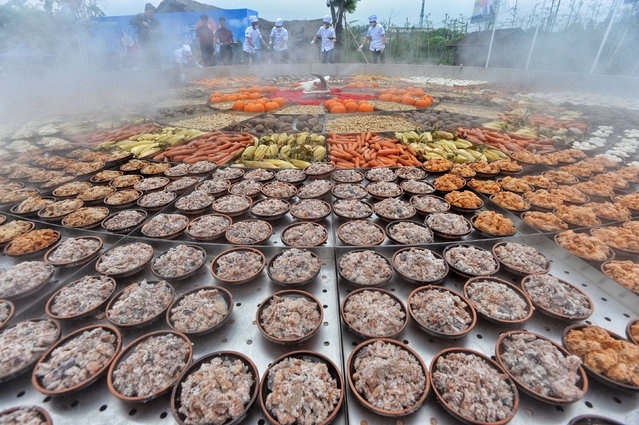 Food dishes are seen on a giant steamer for an event at in Xiantao in Hubei province, China on April 28, 2019. (Photo by Reuters/China Stringer Network) 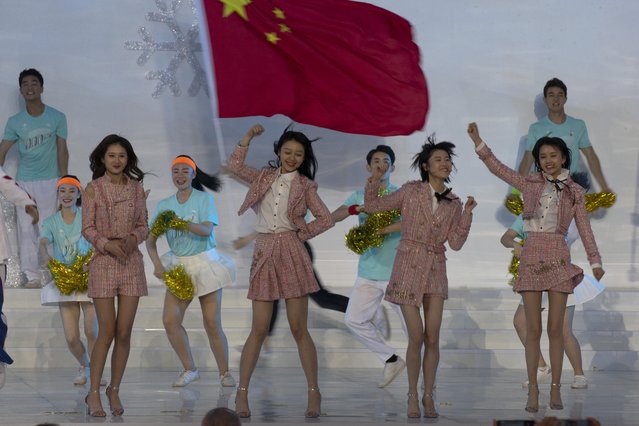 Performers take part in the countdown of 1000 days to the opening ceremony of the Beijing Winter Olympics in Beijing on Friday, May 10, 2019. Come 2022, Beijing will be the first city to have hosted both the Summer and Winter Olympic Games. (Photo by Ng Han Guan/AP Photo) 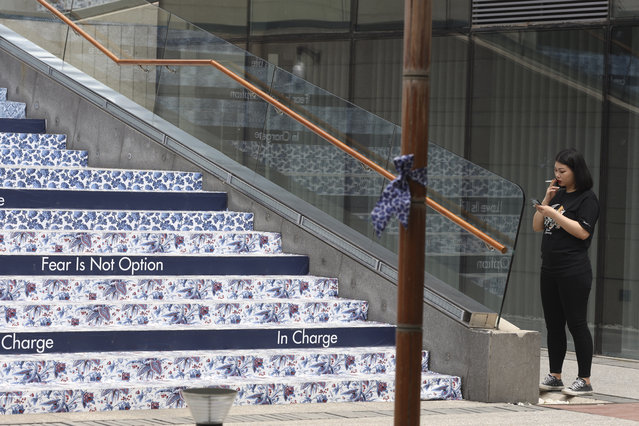 A woman smokes in a quiet shopping district in Beijing on Wednesday, May 8, 2019. China's exports fell in April amid a punishing tariff war with Washington, adding to pressure on Beijing on the eve of negotiations aimed at settling the fight over its technology ambitions. (Photo by Ng Han Guan/AP Photo) 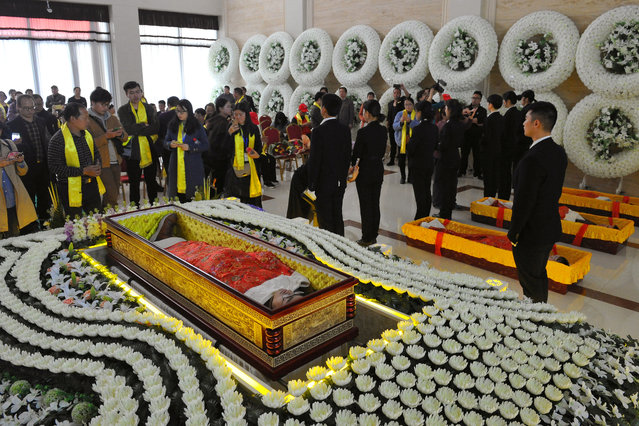 A man lies in a coffin amidst flowers as he takes part in a funeral simulation during an event organized by the local government promoting for the upcoming Qingming, or Tomb Sweeping Day, at a funeral parlor in Jinhua, Zhejiang province, China March 27, 2019. (Photo by Reuters/China Stringer Network) 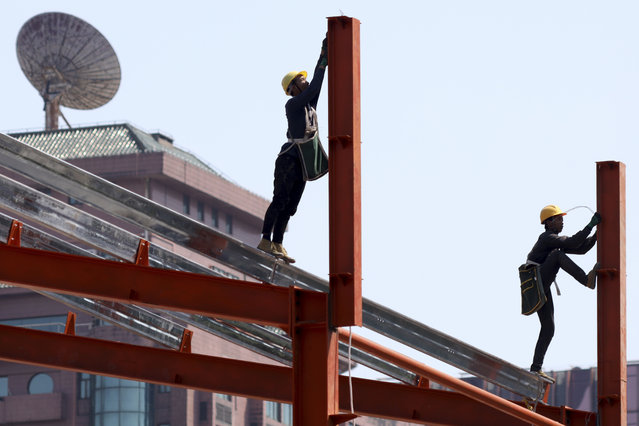 Workers labor in downtown Beijing on Thursday, May 9, 2019. The U.S. effort to win concessions from China on strategic industrial policies has put the Chinese President Xi Jinping's own prestige on the line. It also has cast into question the ruling Communist Party's social contract with the Chinese people: keeping authoritarian, one-party rule and ruling class privileges in exchange for delivering robust economic growth, better living standards and a higher global profile for China. (Photo by Ng Han Guan/AP Photo) 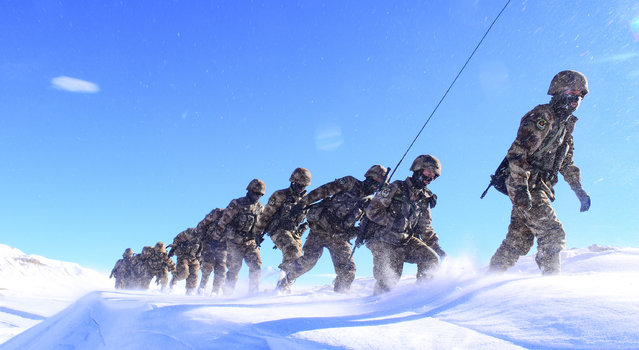 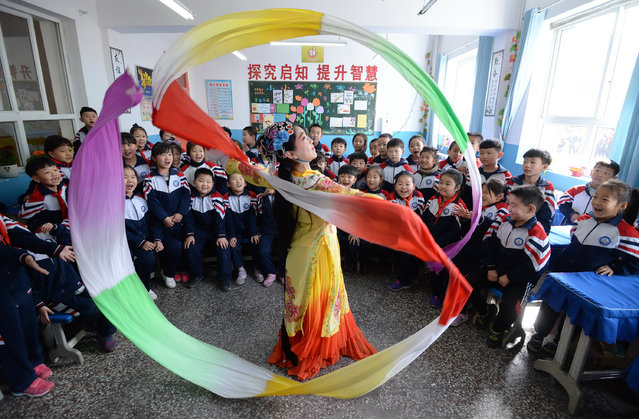 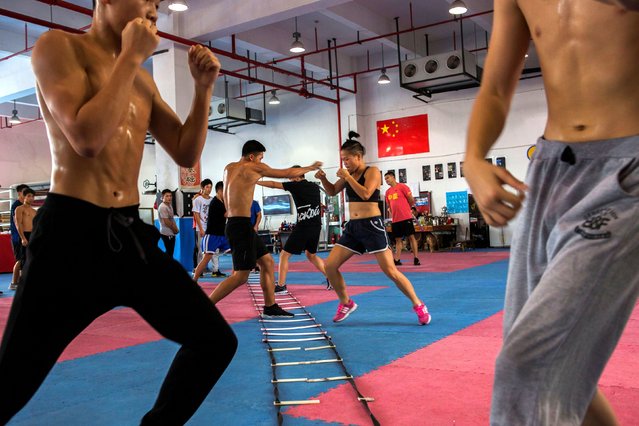 Huang Wensi in action during her final training session in Ningbo, Zhejiang province, China, before she heads to Taiwan for her Asia Female Continental Super Flyweight Championship match, September 23, 2018. Huang is one of a small but growing number of women in China to embrace professional boxing, relishing its intense nature despite traditional stereotypes that steer women away from such activities. “A women is not just limited to being a wife or mother in the house”, she said. (Photo by Yue Wu/Reuters) 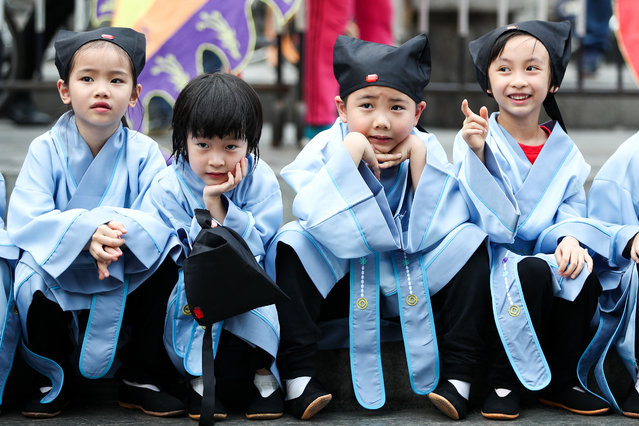 Pre-primary school kids attend First Writing Ceremony with Confucian-style Han clothes at Liziwan Creek on April 8, 2019 in Guangzhou, China. The First Writing Ceremony, also known as the Enlightenment Ceremony, is an important observance for students before they are admitted to school to receive education in China. During the ceremony, teachers place a red dot on each child’s forehead, signifying the opening of wisdom’s eye, in Chinese traditional culture.(Photo by Zhong Zhi/Getty Images) 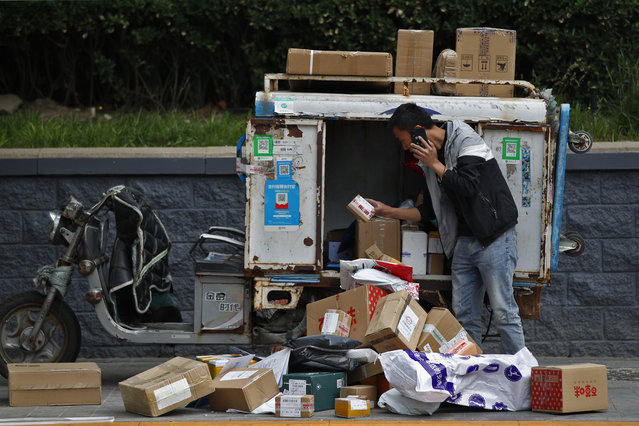 A private delivery company's courier sorts boxes of goods for his customers at the Central Business District in Beijing, Wednesday, May 8, 2019. Washington and Beijing have raised tariffs on billions of dollars of each other's exports, disrupting trade in goods from soybeans to medical equipment. Estimates of lost potential sales so far range as high as $25 billion. (Photo by Andy Wong/AP Photo) 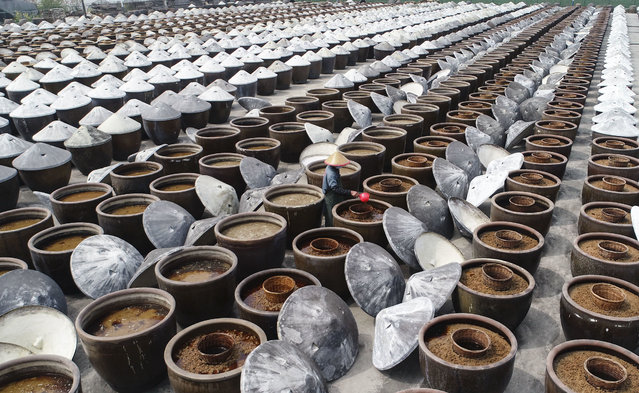 A worker tends to fermentation barrels, part of the traditional manufacture of soy sauce in Jiangsu Province, China on April 15, 2019. (Photo by Sipa Asia/Rex Features/Shutterstock) 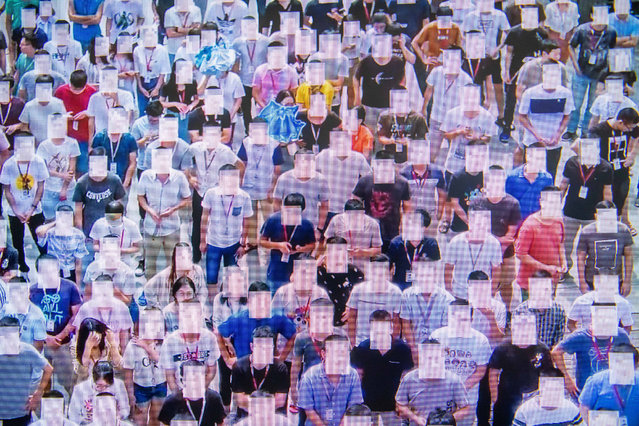 Monitoring technology is seen at the exhibition hall at the Huawei Technologies Co. headquarters on March 29, 2019 in Shenzhen, China. Huawei, the worlds largest telecommunication equipment maker, reported on Friday its annual profit rose 25% to 59.3 billion yuan ($8.7 billion) despite being at the center of global scrutiny. (Photo by Billy H.C. Kwok/Getty Images) 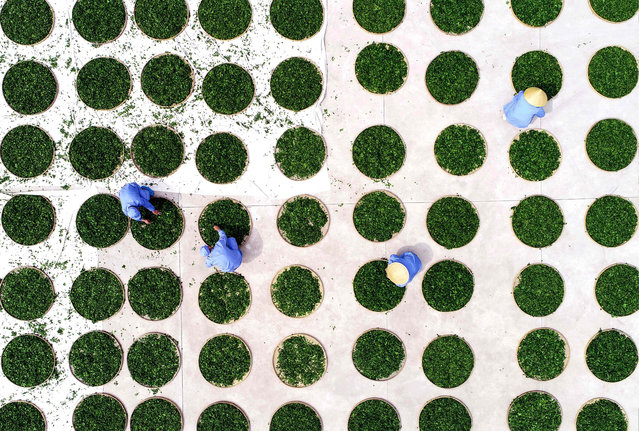 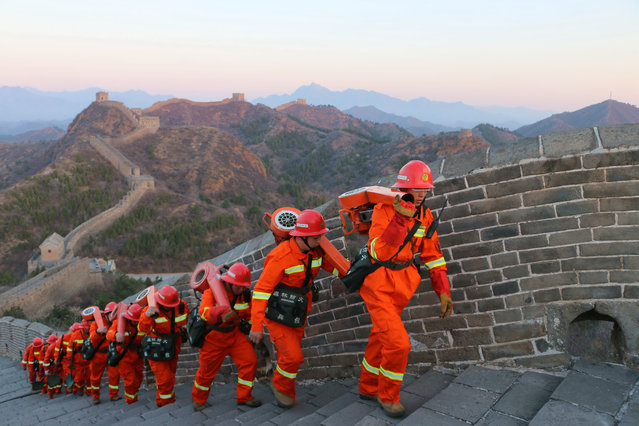 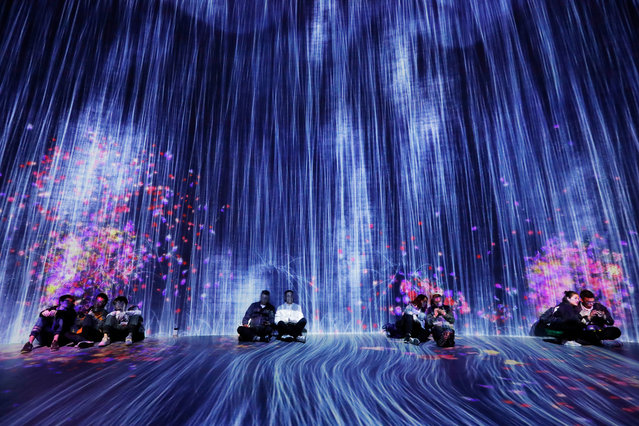 People visit the art show “Universe of Water Particles in the Tank” by teamLab at Tank Shanghai art space project in Shanghai, China, 11 April 2019. The Tank Shanghai which is an art space founded by renowned contemporary art collector Qiao Zhibing. It's a multifunctional cultural hub that combines exhibition venue with parkland, plaza, bookstore, education center and restaurant. This art space project spans over 60,000 square meters including five disused oil tanks that formerly stored fuel for the nearby Hongqiao International airport located on the banks of Shanghai's Huangpu river. (Photo by Wu Hong/EPA/EFE) 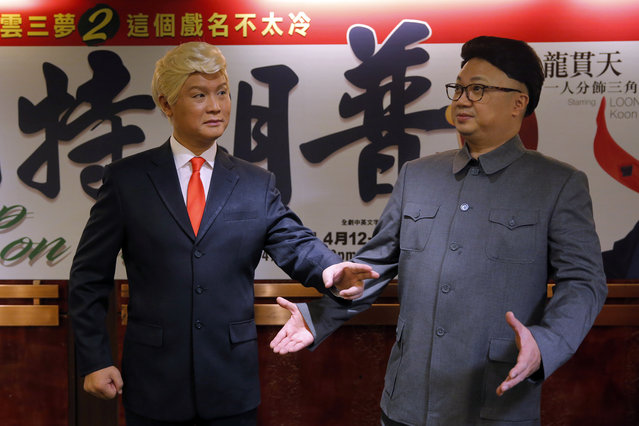 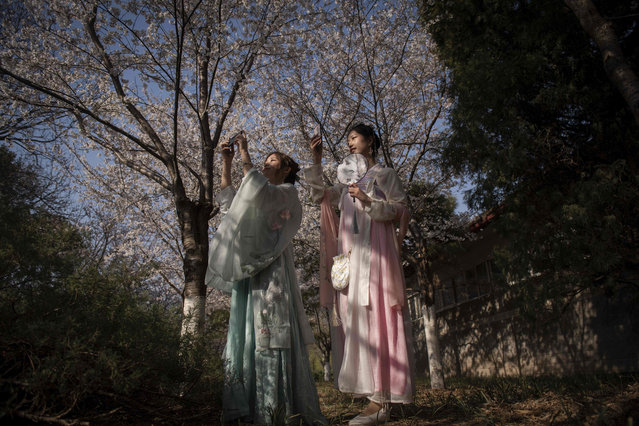 In this picture taken on March 24, 2019 two young Chinese women dressed in Han Chinese clothing take photos of the cherry blossoms with their smartphones in the Yuyuantan park in Beijing. Hanfu, meaning clothing of the Han people, is a name for pre-17th century traditional clothing of the Han Chinese, which are the predominant ethnic group of China. (Photo by Nicolas Asfouri/AFP Photo) 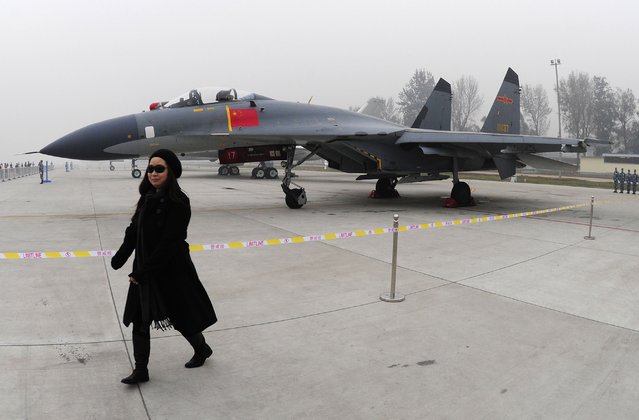 In this November 8, 2009, file photo, a woman walks near a Chinese People's Liberation Army Air Force's J-11 fighter jet displayed for the Air Force's 60th anniversary at an airport in Beijing, China. Taiwan says its planes warned off Chinese military aircraft that crossed the center line in the Taiwan Strait, calling China’s move a provocation that seeks to alter the status quo in the waterway dividing the island from mainland China. (Photo by AP Photo/File) 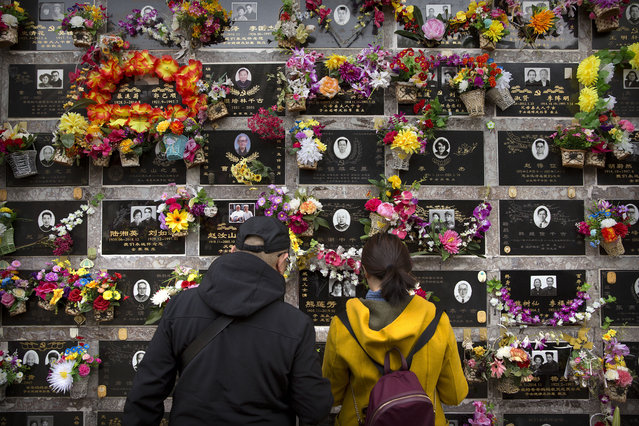 Visitors look at a columbarium at the Babaoshan Revolutionary Cemetery during the Qingming festival in Beijing, Friday, April 5, 2019. Qingming festival, also known as the Grave Sweeping Day, is a day when Chinese around the world remember their dearly departed and take time off to clean up the tombs and place flowers and offerings. (Photo by Mark Schiefelbein/AP Photo) 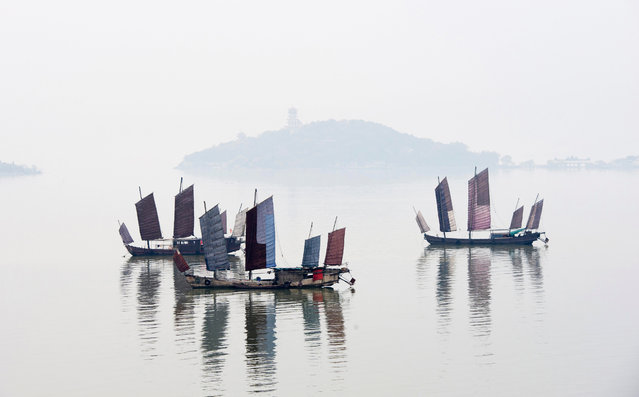