Fact A Look at Life in Congo 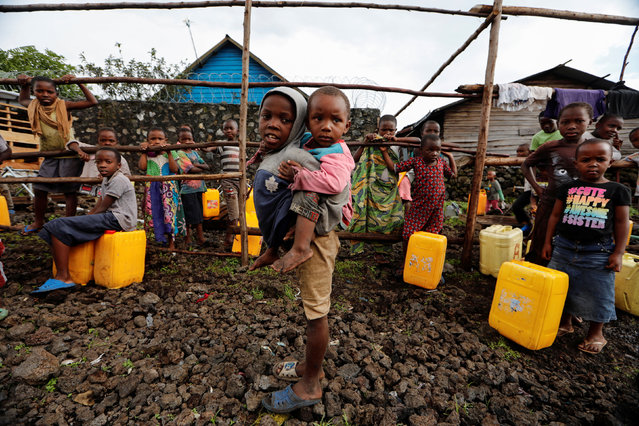 Children are pictured at a water point in Bugamba district of Goma, the capital of North Kivu, eastern Democratic Republic of Congo, September 30, 2019. (Photo by Zohra Bensemra/Reuters) 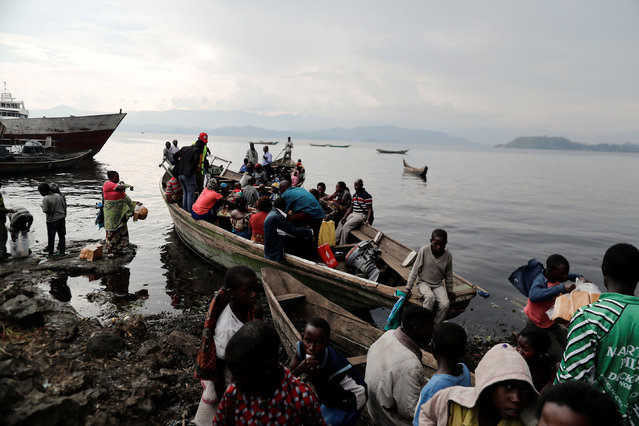 A health worker collects the names of citizens and checks their temperatures as part of the Ebola screening procedure upon their arrival from the South to the North of Lake Kivu, in Kituku, crossing point in Goma, the capital of North Kivu, eastern Democratic Republic of Congo, September 29, 2019. (Photo by Zohra Bensemra/Reuters) 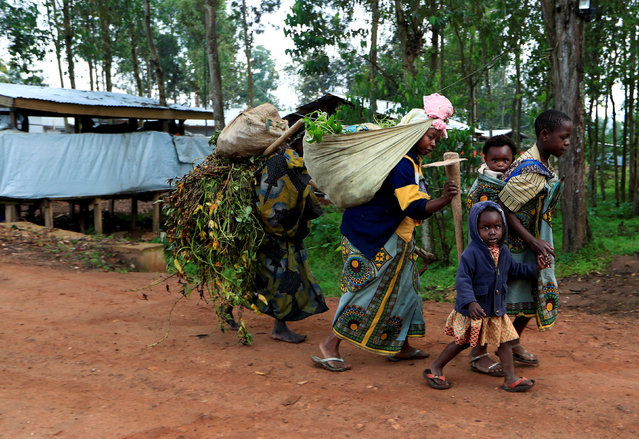 People walk past an Ebola treatment center (ETC) in Katwa, near Butembo, in the Democratic Republic of Congo, October 5, 2019. (Photo by Zohra Bensemra/Reuters) 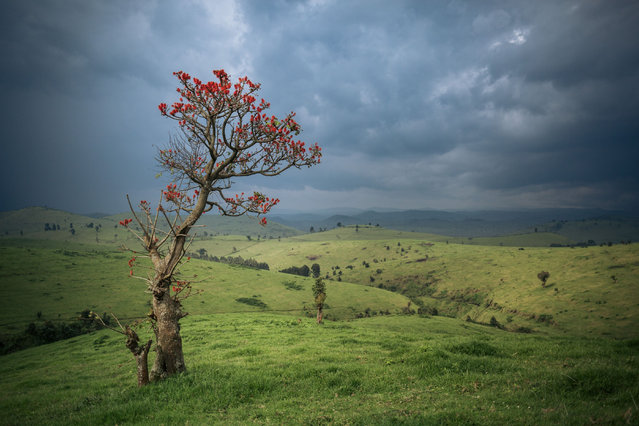 This photograph, taken on September 28, 2019, shows an Erythrina Abyssinica planted in a pasture on Ferme Espoir, owned by former President Joseph Kabila, in Masisi territory, northeast of the Democratic Republic of Congo. (Photo by Alexis Huguet/AFP Photo) 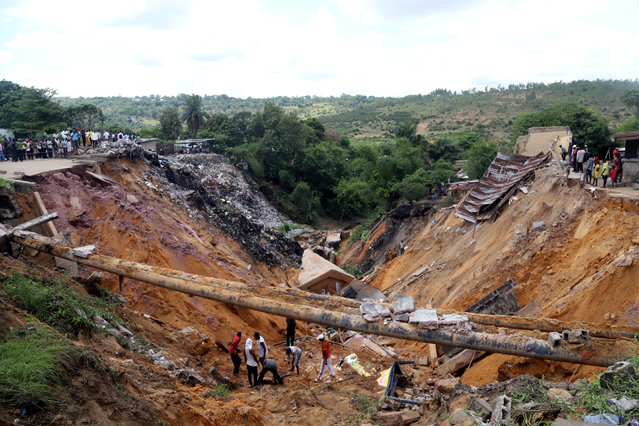 Residents search for the bodies of their missing kin at the scene of a landslide following torrential rains near the University of Kinshasa, in the Democratic Republic of Congo November 27, 2019. (Photo by Kenny Katombe/Reuters) 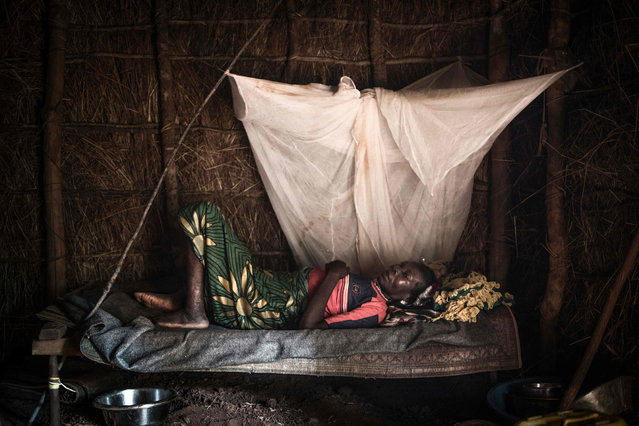 A patient waits for an surgery in the makeshift hospital of the Zapai Internal Displaced People camp near Zemio, on September, 28, 2019. Following violence in 2017, some of Zemio's inhabitants took refuge in Zapai, Democratic Republic of Congo. The two towns, totally isolated, are separated by the Mbomou River, which is taxed by armed groups. (Photo by Florent Vergnes/AFP Photo) 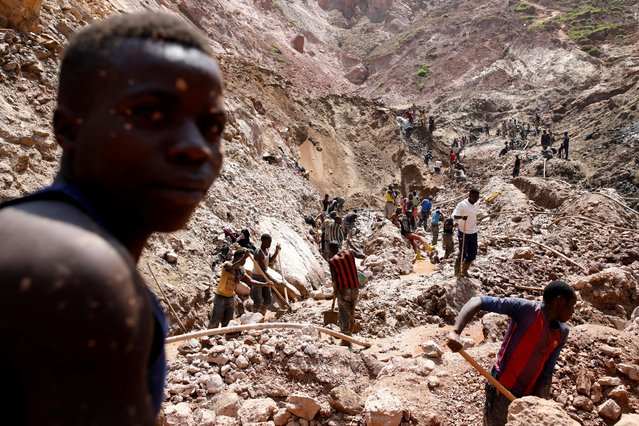 Labourers work at an open shaft of the SMB coltan mine near the town of Rubaya in the Eastern Democratic Republic of Congo, August 13, 2019. (Photo by Baz Ratner/Reuters) 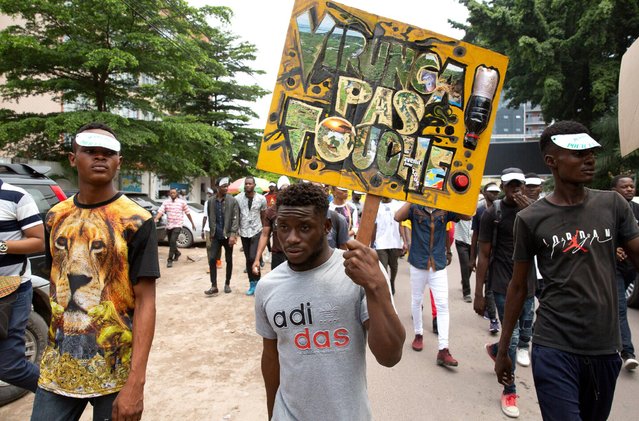 A protester carries a sign that reads “Don't touch Virunga” during the climate protest in the streets of Kinshasa, Democratic Republic of the Congo on November 29, 2019. (Photo by Hereward Holland/Reuters) 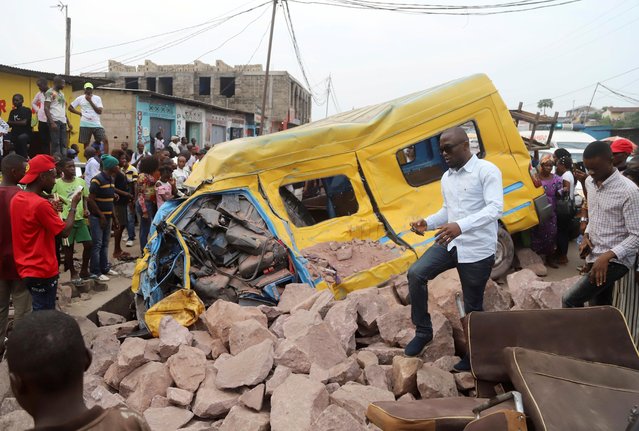 Civilians look at the wreckage of a public transport van following an accident in Mont-Ngafula district of Kinshasa, Democratic Republic of Congo on February 16, 2020. (Photo by Kenny Katombe/Reuters) 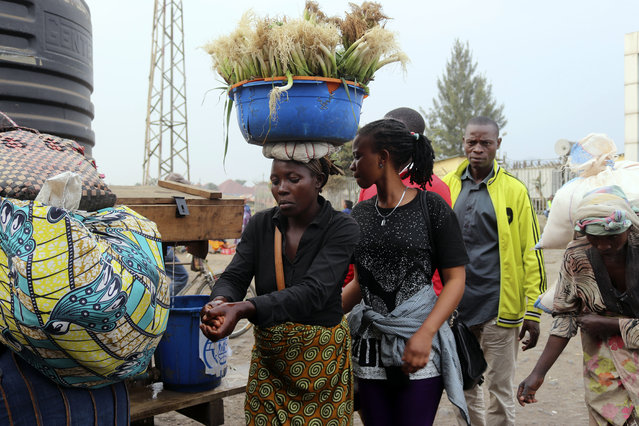 People wash their hands at the Congo side of the Poids Lourd checkpoint at the border between Congo and Rwanda, Thursday, August 1, 2019. Congo's presidency says the border is open again with Rwanda hours after its eastern neighbor closed it over the deadly Ebola outbreak. The closure occurred Thursday morning as the first case of direct transmission of the Ebola virus was confirmed in Goma, the Congo city of more than 2 million people on the Rwandan border. (Photo by AP Photo/Stringer) 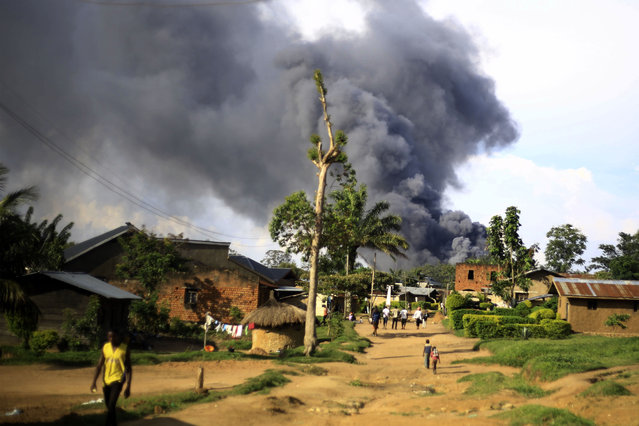 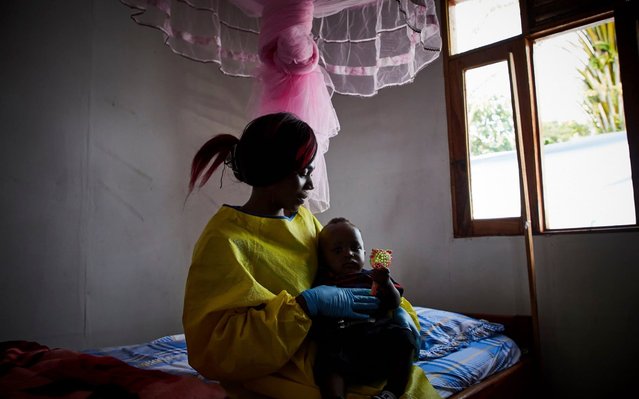 Anita Kambala, a UNICEF carer at a creche for children whose parents are being treated for Ebola, comforts a child during the visit of United Nations Secretary General Antonio Guterres to an Ebola treatment center in Mangina, North Kivu province, Democratic Republic of the Congo, 01 September 2019. UN chief visited Mangina in North Kivu, the epicenter of Congo's current Ebola epidemic that claimed more than 2,000 lives. (Photo by Hugh Kinsella Cunningham/EPA/EFE/Rex Features/Shutterstock) 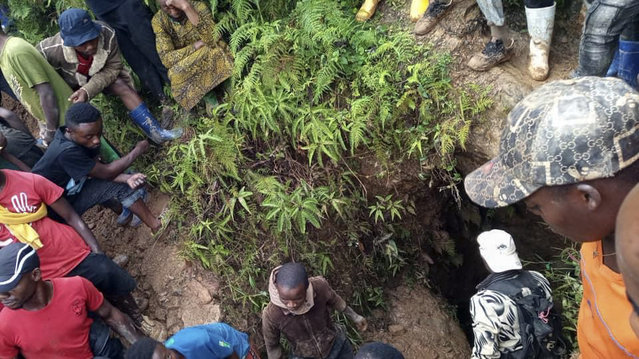 People gather at the scene of a gold mine collapse near the town of Kamituga, South Kivu province, in eastern Congo Friday, September 11, 2020. More than 50 people are dead after landslides collapsed three artisanal gold mines near the town of Kamituga in eastern Congo's South Kivu province on Friday, officials said. (Photo by Jeff Mwenyemali/Maisha RDC via AP Photo) 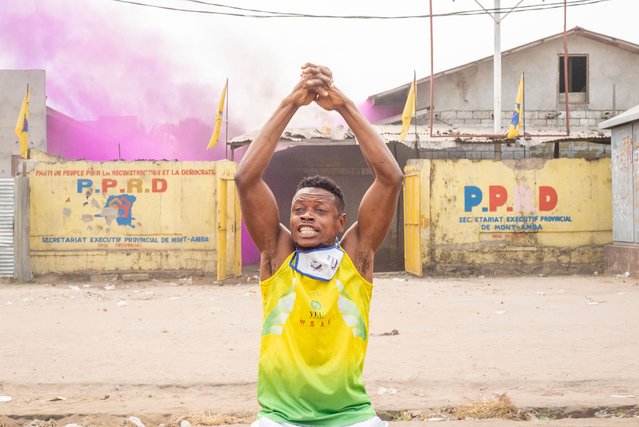 A demonstrator gestures during a protest where demonstrators and police officers clashed in Kinshasa on July 9, 2020 in demonstrations organized against the presidential party Union for Democracy and Social Progress (UDPS) for the appointment of the new president of the Electoral Commission. The Democratic Republic of Congo is going through a period of high political tension. (Photo by Arsene Mpiana/AFP Photo) 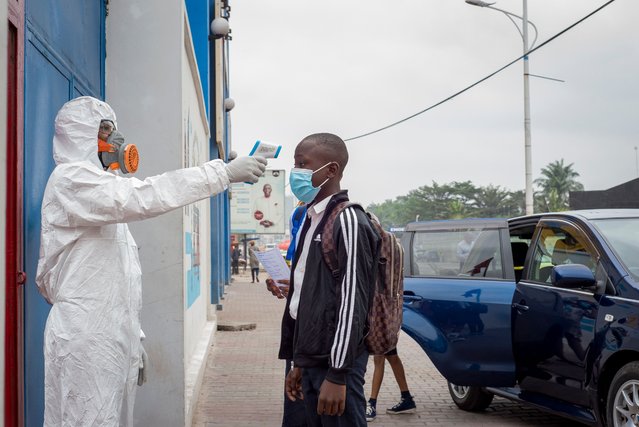