Fact A Look at Life in Cuba 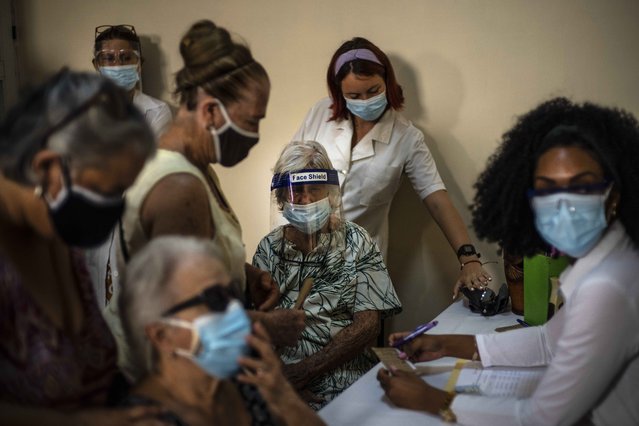 In this June 23, 2021 file photo, people sign up for a dose of the Cuban Abdala COVID-19 vaccine in Havana, Cuba. Cuba has been trying to rapidly roll out the two vaccines that it has approved for massive use, Abdala and Soberana, both of which require three jabs. (Photo by Ramon Espinosa/AP Photo/File) 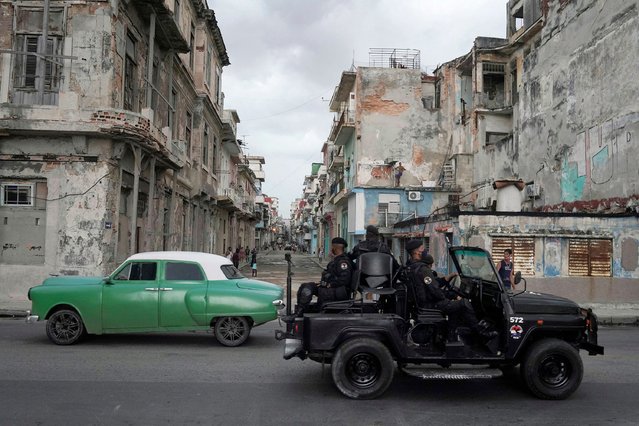 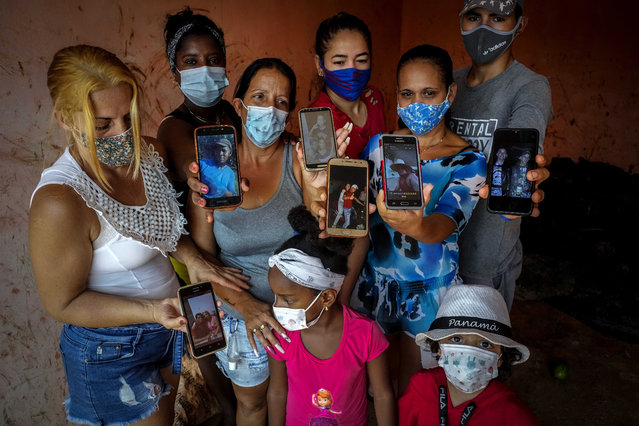 Zuleydis “Zuly” Elledias, left, shows a cellphone photo of her missing husband to a child while her neighbors pose for a group picture holding up cellphone photos of their missing relatives who ventured out in homemade boats in an attempt to reach Florida, in Orlando Nodarse, about 60 kilometers west of Havana, Cuba, Wednesday, June 30, 2021. Cuba is seeing a surge in unauthorized migration to the United States, fueled by an economic crisis. (Photo by Ramon Espinosa/AP Photo) 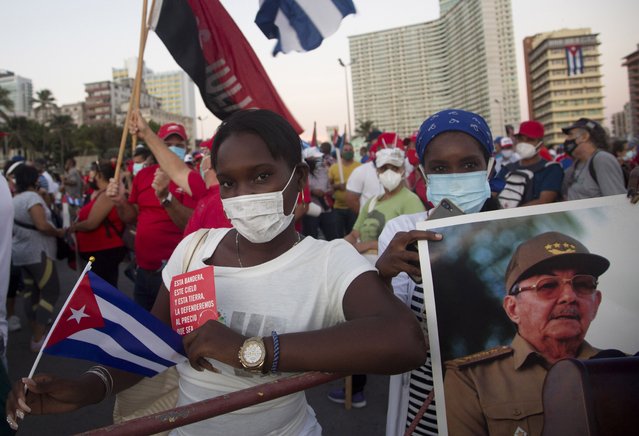 People attend a cultural-political event on the seaside Malecon Avenue with thousands of people in a show of support for the Cuban revolution six days after the uprising of anti-government protesters across the island, in Havana, Cuba, Saturday, July 17, 2021. (Photo by Ismael Francisco/AP Photo) 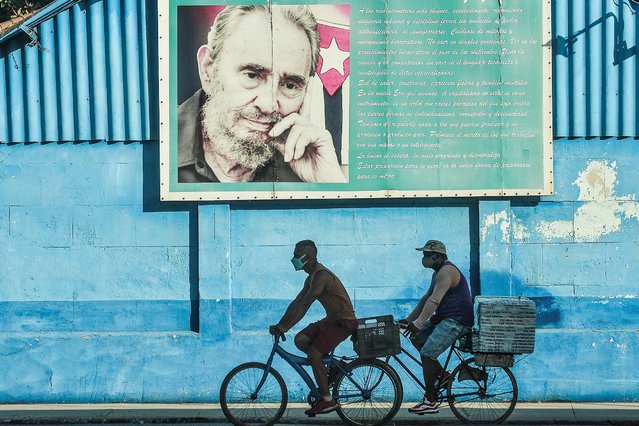 In this file photo men ride on their bicycles near a poster of Cuban late leader Fidel Castro in Havana, on July 12, 2021. The United States on July 13, 2021 urged Cuba to end internet restrictions imposed after unprecedented protests and renewed a call for the release of detained demonstrators. “We call on Cuba's leaders to demonstratate restraint (and) respect for the voice of the people by opening all means of communciation, both online and offline”, State Department spokesman Ned Price told reporters. (Photo by Yamil Lage/AFP Photo) 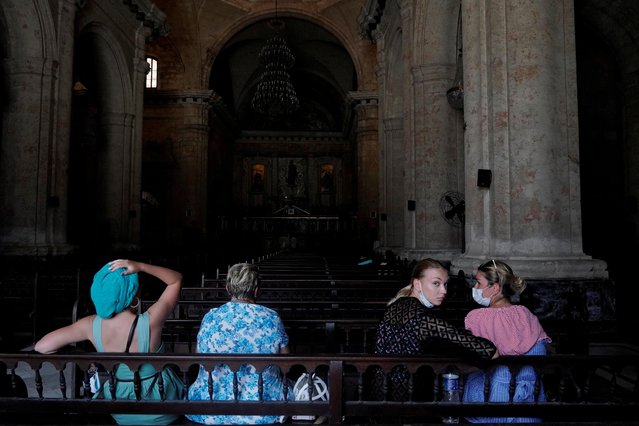 Tourists from Russia sit inside the Havana's Cathedral amidst the coronavirus disease (COVID-19) outbreak, Cuba on July 19, 2021. (Photo by Alexandre Meneghini/Reuters) 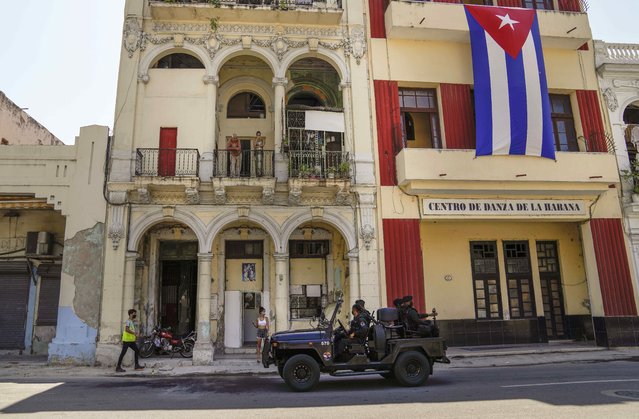 Special forces police patrol the streets as they drive past a large Cuban flag hanging from the facade of a building, in Havana, Cuba, Wednesday, July 21, 2021. (Photo by Eliana Aponte/AP Photo) 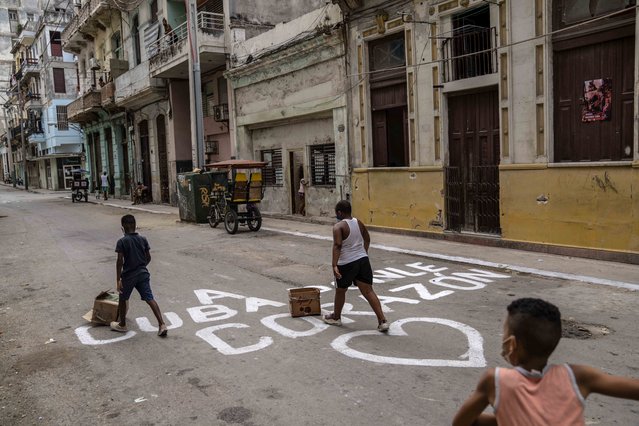 Children play on a street that has graffiti reading is Spanish “Put your heart on Cuba”, in Havana, Cuba, Monday, July 26, 2021. (Photo by Eliana Aponte/AP Photo) 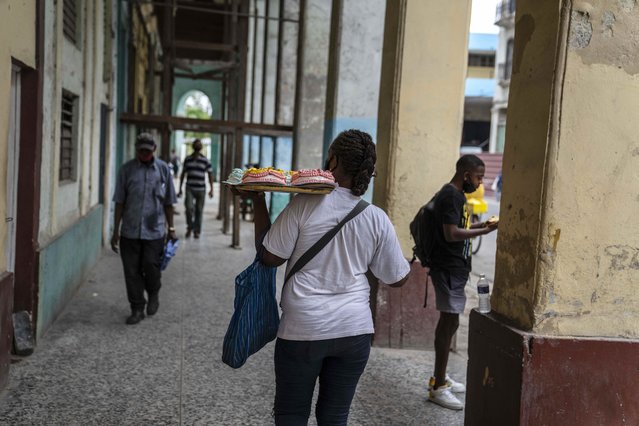 A woman walks down the street carrying a tray of cakes in Havana, Cuba, Monday, July 26, 2021. (Photo by Eliana Aponte/AP Photo) 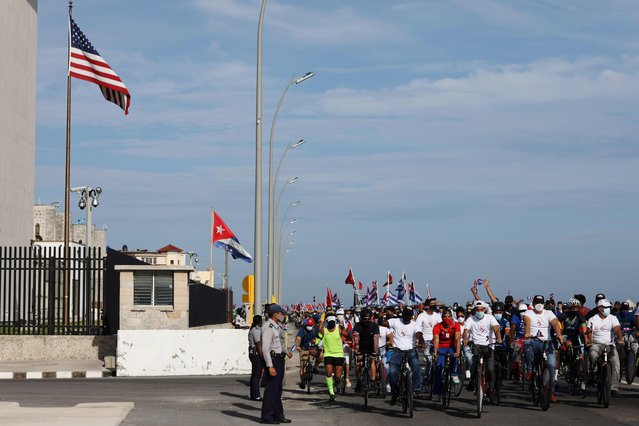 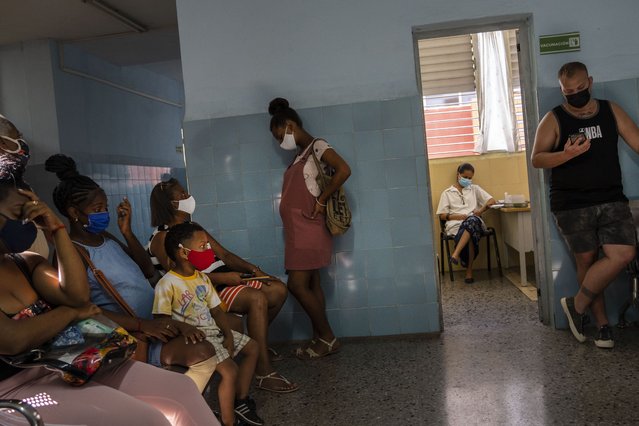 A pregnant woman waits to get a shot of the Cuban Abdala vaccine for COVID-19 at a clinic during the new coronavirus pandemic in Havana, Cuba, Thursday, August 5, 2021. (Photo by Ramon Espinosa/AP Photo) 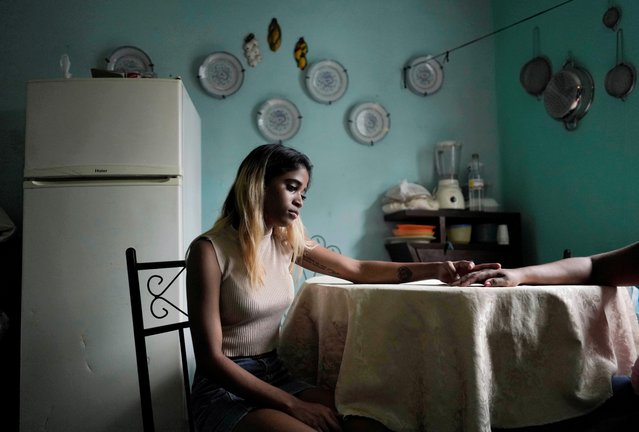 Gabriela Sequeira Hernandez, 17, holds her mother's hand during an interview in Havana, Cuba, August 10, 2021. Hundreds of people remain detained in Communist-run Cuba a month after unprecedented anti-government protests, according to rights groups. The 17-year-old, one of several minors detained in the protests, said she was sentenced to house arrest for eight months after being arrested while walking home from the hairdressers on July 11. Upon her admission to jail, where she was kept 10 days incommunicado, she said she was required to put a finger in her v*gina to show she was concealing nothing as part of a strip search. Officers kept interrupting her attempts to sleep and one officer made sexual taunts, she said in an interview. The Cuban government initially said no minors had been detained, a statement later contradicted by state prosecutors. (Photo by Alexandre Meneghini/Reuters) 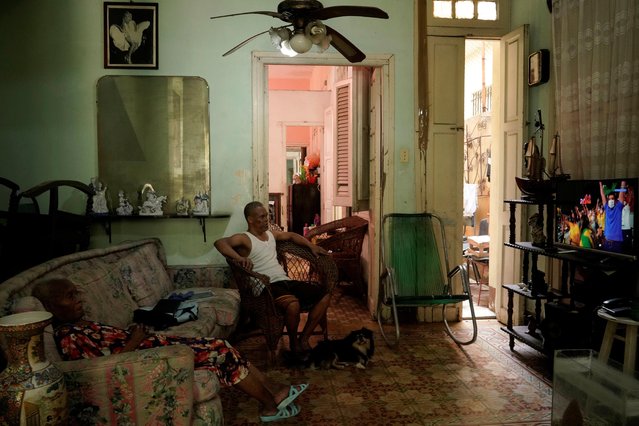 Francisco Cabrera and his mother watch a TV broadcast of volleyball competition during the 2020 Tokyo Olympic Games, amid the coronavirus disease (COVID-19) pandemic in Havana, Cuba, August 7, 2021. (Photo by Alexandre Meneghini/Reuters) 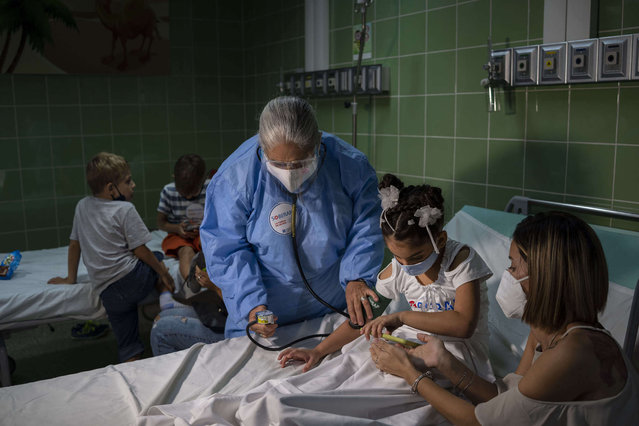 A nurse takes a girl's blood pressure after giving her a dose of the Cuban-made Soberana-02 vaccine for COVID-19 in Havana, Cuba, Tuesday, August 24, 2021. (Photo by Ramon Espinosa/AP Photo) 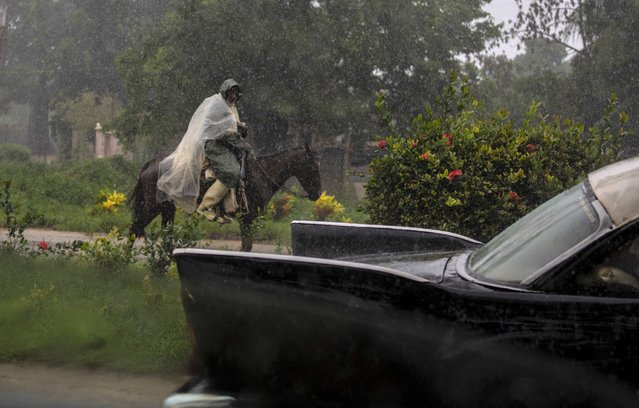 A man, using a piece of plastic against protection of the rain caused by Hurricane Ida, rides his horse on a road leading to Batabano, in the Mayabeque province, Cuba, Friday, August 27, 2021. (Photo by Ramon Espinosa/AP Photo) 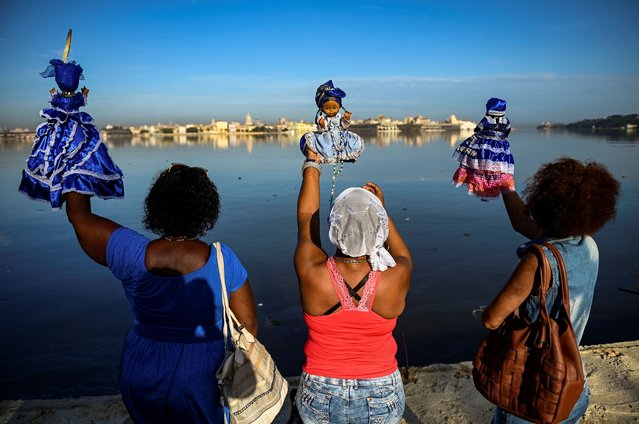 Followers of the Yoruba sea goddess Yemaya, give offering at the Havana harbour during Yemaya Day celebrations in Havana, on September 7, 2021. (Photo by Yamil Lage/AFP Photo) 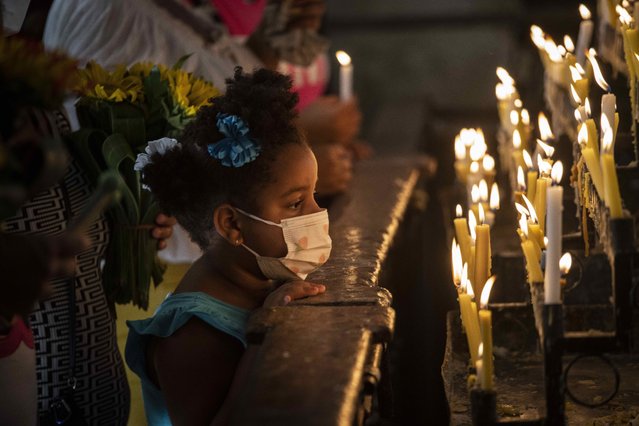 A girl wearing a mask amid the COVID-19 pandemic kneels in prayer before candles at Our Lady of Cobre Church as faithful mark the feast day of Cuba's patron saint, the Virgin of Charity of Cobre, in Havana, Cuba, Wednesday, September 8, 2021. For the second year in a row, the annual procession with the statue of the Virgin of Charity of Cobre was cancelled due to the pandemic. (Photo by Ramon Espinosa/AP Photo) 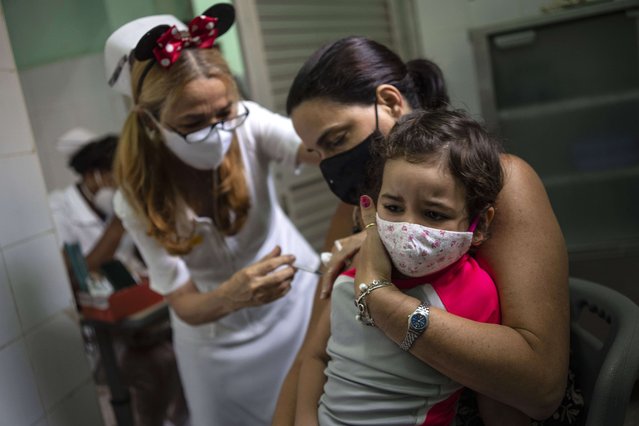 A mother holds her daughter who is injected with a dose of the Soberana-02 COVID-19 vaccine, in Havana, Cuba, Thursday, September 16, 2021. Cuba began inoculating children as young as 2-years-old with locally developed vaccines on Thursday. (Photo by Ramon Espinosa/AP Photo) 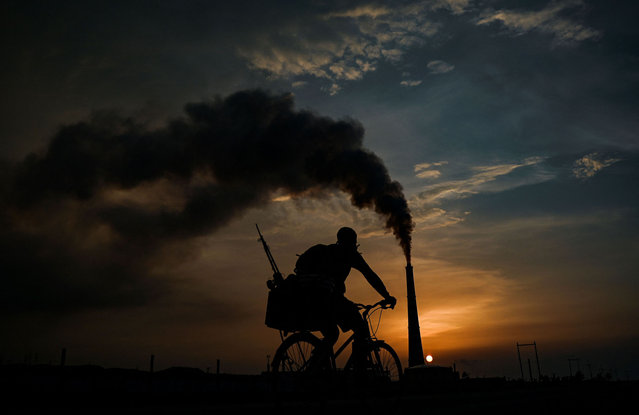 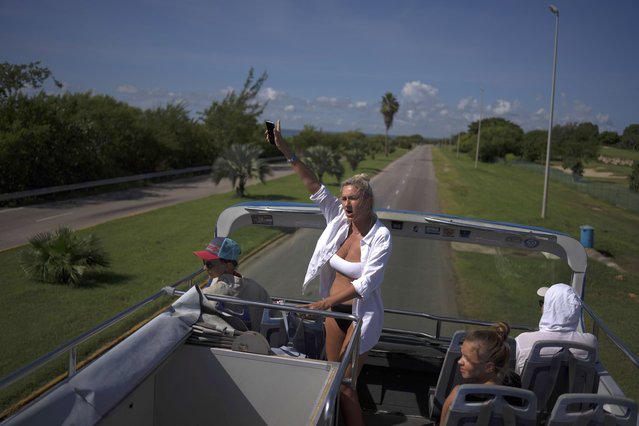