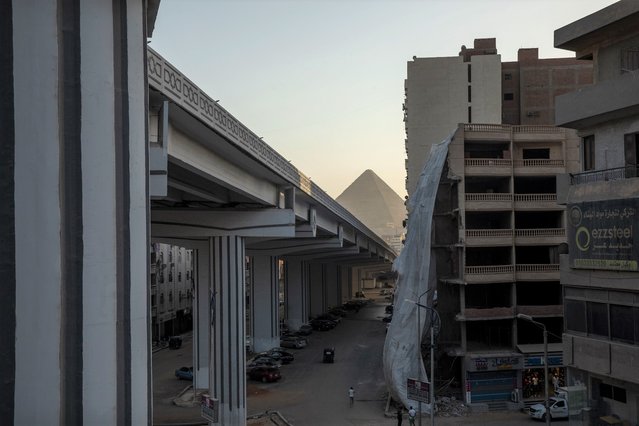 A bridge is under construction, part of mega projects that include building new cities, roads, bridges and tunnels to relieve congestion in Cairo, one of the world's most crowded cities, in Giza, Egypt, Monday, July 19, 2021. (Photo by Nariman El-Mofty/AP Photo) 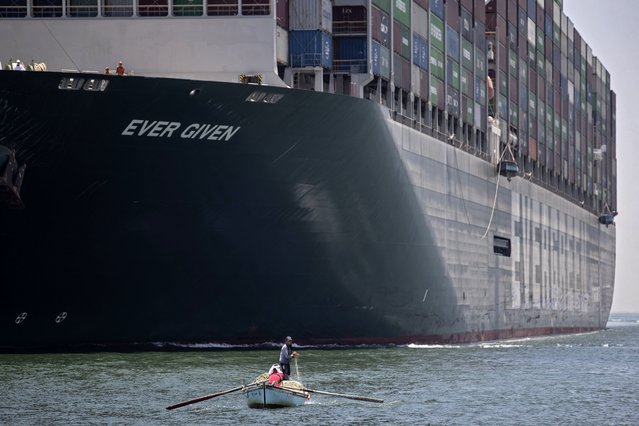 This picture on July 7, 2021 shows a view of the Panama-flagged MV 'Ever Given' container ship sailing along Egypt's Suez Canal near the canal's central city of Ismailia. Megaship the MV Ever Given, which had blocked the Suez Canal for six days in March, weighed anchor on July 7 after Egyptian authorities and the Japanese owner agreed a compensation deal. The 200,000-tonne container vessel was stuck in the waterway during a sandstorm on March 23, causing major disruption to world shipping and the loss of millions in revenue for Egypt. (Photo by Mahmoud Khaled/AFP Photo) 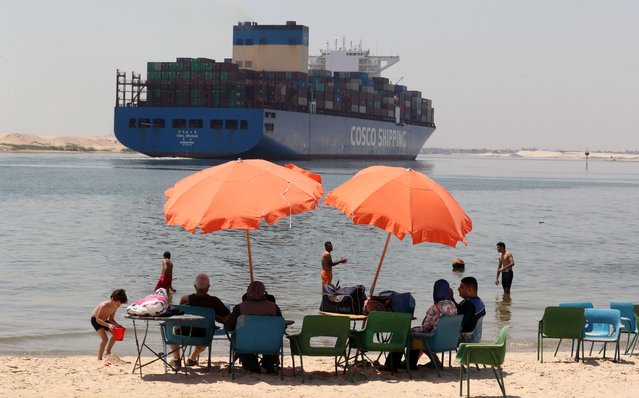 Egyptians swim in the Suez Canal as a container ship moves through it, in Ismaila, Egypt, 27 May 2021. The Suez Canal Authority (SCA) chairman Osama Rabie, in an interview with EFE News Agency in Ismailia on the eve of the start of the compensation trial against the 'Ever Given' said that the black box indicated a serious fault of the captain because the center of the ship wasn't in the middle of the entrance and entered with a high speed that is not allowed in narrow sea lanes, which led to the accident that choked the canal and entered the ship 12 meters in the deep of the shore because of the high speed. Rabie also said that “We are making a new 10 kilometers track to increase the number of passing ships and reduce the crossing time. And we're going to widen the canal 40 meters and increase the depth from 66 to 72 feet in the southern section” to prevent future accidents. (Photo by Khaled Elfiqi/EPA/EFE) 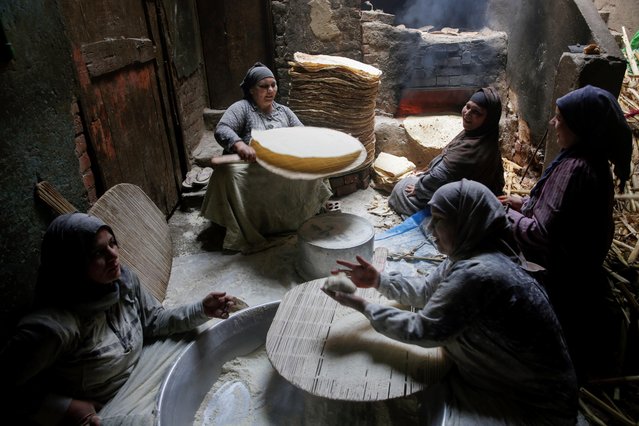 Nour El-Sabah, 35, prepares traditional food with her family to sell during the holy month of Ramadan in Beni Suef, Egypt, April 10, 2021. (Photo by Hayam Adel/Reuters) 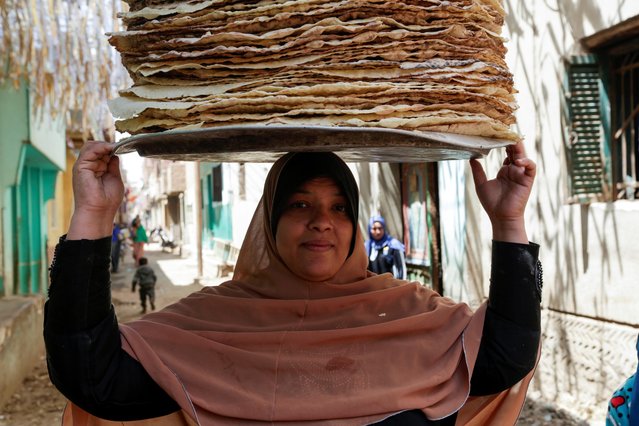 Nour El-Sabah, 35, carries bread and poses for the camera during the holy month of Ramadan in Beni Suef, Egypt, April 10, 2021. (Photo by Hayam Adel/Reuters) 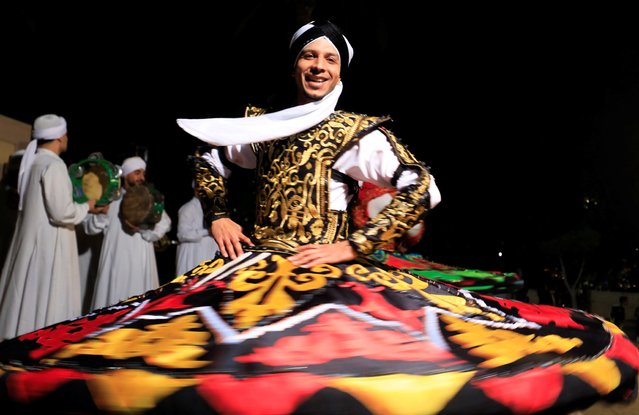 An Egyptian dancer performs the Tanoura, an Egyptian version of Sufi dance, during the holy fasting month of Ramadan in Cairo, Egypt on April 23, 2021. (Photo by Amr Abdallah Dalsh/Reuters) 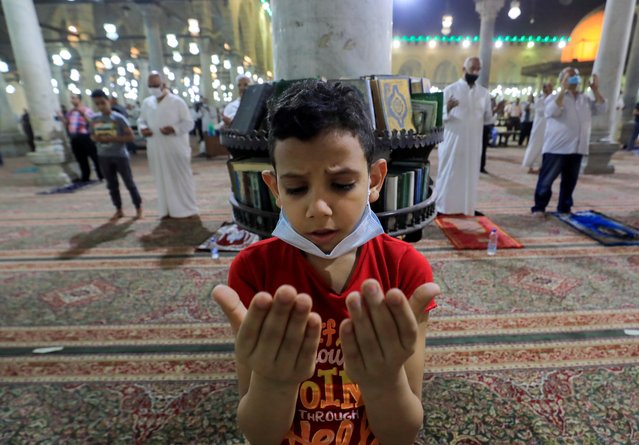 A Muslim worshipper boy takes part in evening prayers called “Tarawih” on Laylat al-Qadr or Night of Decree, inside Amr Ibn El-Aas Mosque on the holy fasting month of Ramadan in old Cairo, Egypt on May 8, 2021. (Photo by Amr Abdallah Dalsh/Reuters) 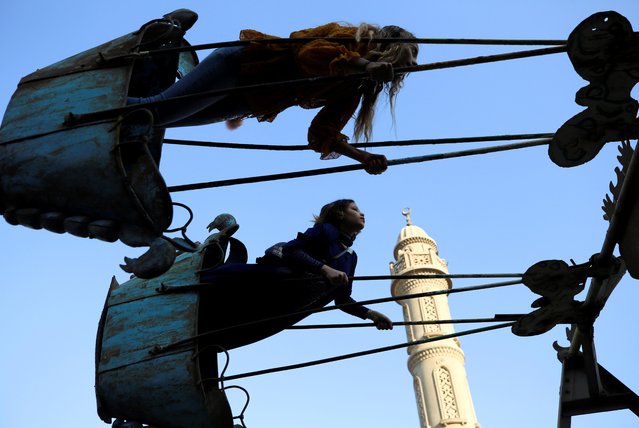 Kids play after Eid al-Fitr prayer marking the end of the holy fasting month of Ramadan, at Amr Ibn El-Aas mosque in Cairo, Egypt on May 13, 2021. (Photo by Mohamed Abd El Ghany/Reuters)

Mariam Yehia prepares to distribute food during the Muslim holy month of Ramadan, in Cairo, Egypt, Sunday, May 2, 2021. Yehia has a Ramadan tradition of buying hot meals and driving around to hand them out to the needy in Cairo so they can break their fast during the Muslim holy month. But she always felt like she wasn't doing enough. This year, an online post inspired the 26-year-old to do more. A friend wrote about a financially struggling chef, and Yehia decided to buy from him Ramadan meals that she then distributed to the poor. (Photo by Nariman El-Mofty/AP Photo) 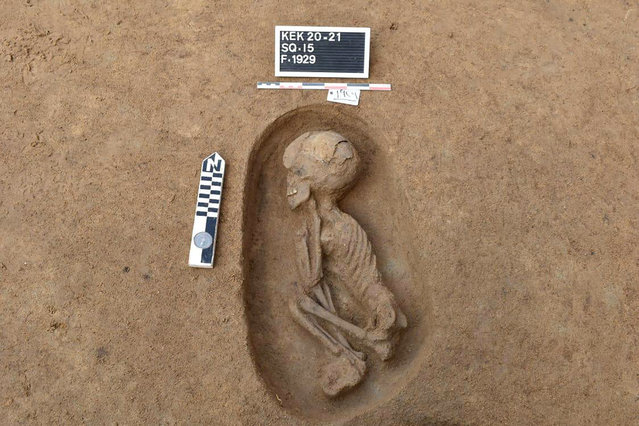 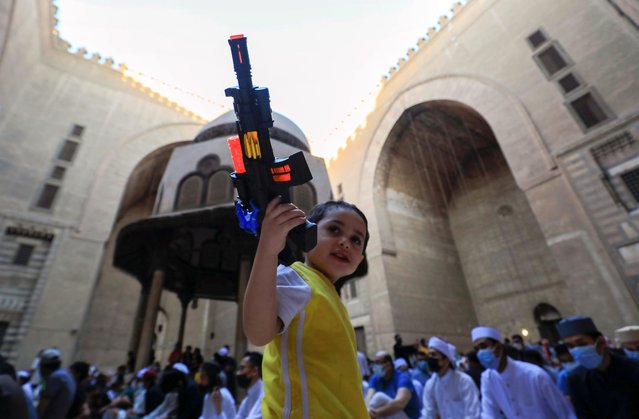 A boy plays with a toy gun in front of Muslim worshippers attending Eid al-Fitr prayer to mark the end of the holy fasting month of Ramadan, inside Al Sultan Hassan mosque, amid the coronavirus disease (COVID-19) pandemic, in old Cairo, Egypt on May 13, 2021. (Photo by Amr Abdallah Dalsh/Reuters) 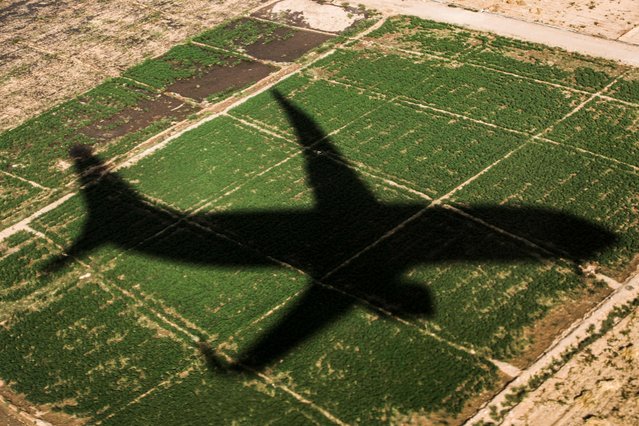 This picture taken on April 10, 2021 shows a shadow of an aircraft looming over an agricultural field prior to landing at Luxor International Airport, on the eastern outskirts of Egypt’s southern city of Luxor. (Photo by Khaled Desouki/AFP Photo) 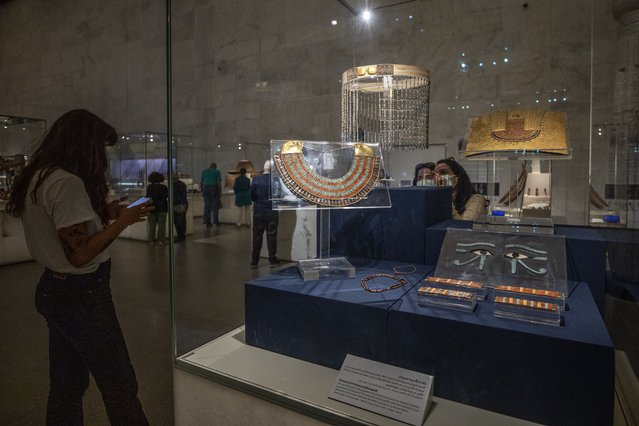 In this April 24, 2021 file photo, women look at a collection of the jewelry of Princess Neferuptah, the daughter of King Amenemhat III, on display in its glass case at the new National Museum of Egyptian Civilization in Old Cairo. As some European countries re-open to international tourists, Egypt has already been trying for months to attract them to its archaeological sites and museums. Officials are betting that the new ancient discoveries will set it apart on the mid- and post-pandemic tourism market. (Photo by Nariman El-Mofty/AP Photo/File) 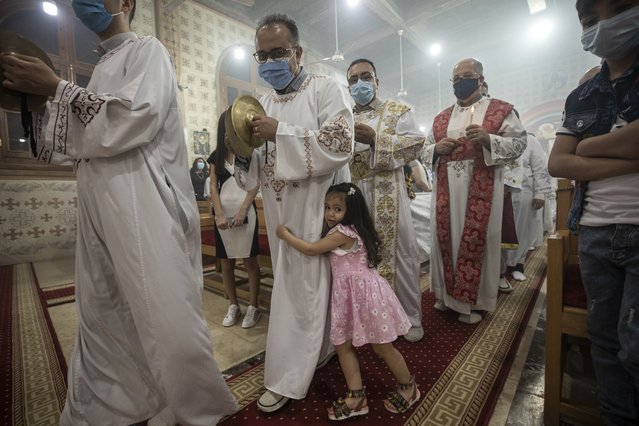 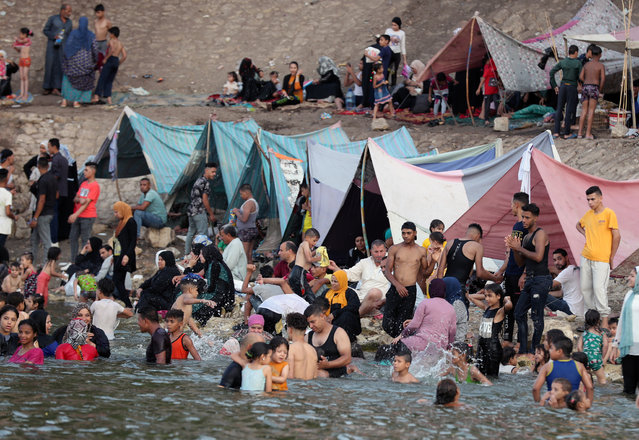 People enjoy in the water of the Nile river during hot weather in the Qanater outskirts of Cairo, Egypt, 06 August 2021. (Photo by Khaled Elfiqi/EPA/EFE) 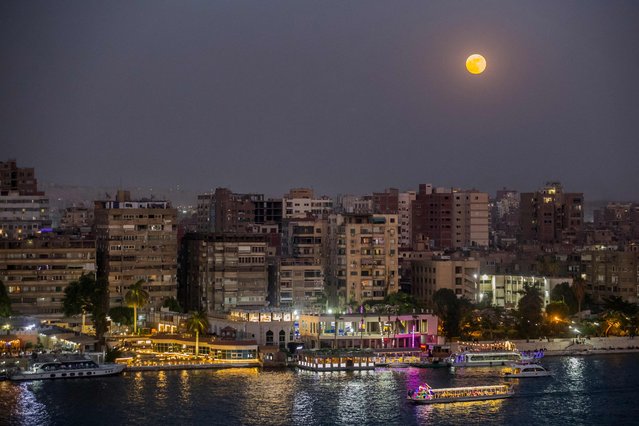 The full Strawberry moon, the last super moon of the year, rises above the Egyptian capital Cairo, on June 24, 2021. (Photo by Khaled Desouki/AFP Photo) 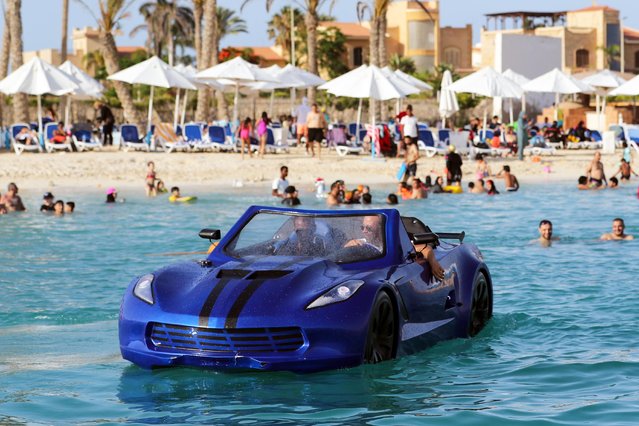 Karim Amin, 29, one of the three Egyptians who designed and invented a vehicle that can drive on water, drives the vehicle at Porto Marina in Alexandria, Egypt on June 11, 2021. (Photo by Mohamed Abd El Ghany/Reuters) 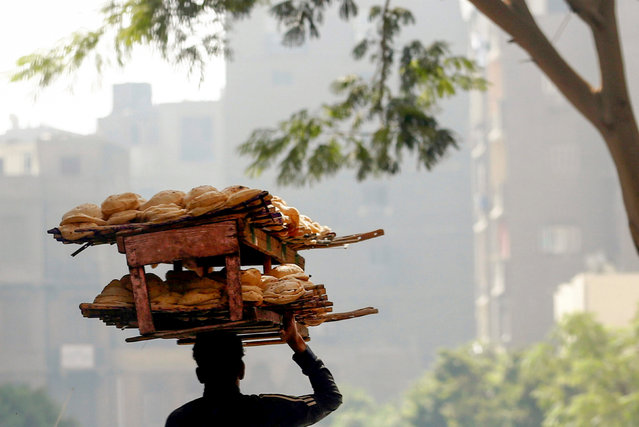 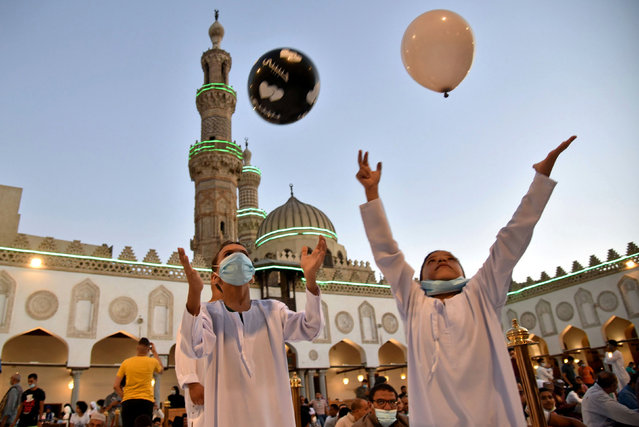