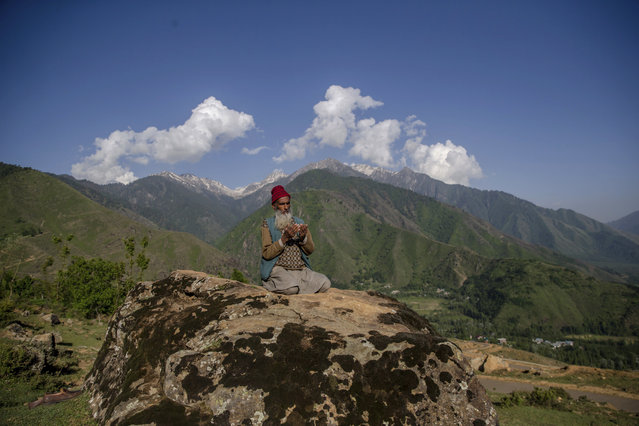 An elderly man prays seated on a rock aduring the holy month of Ramadan, on the outskirts of Srinagar, Indian controlled Kashmir, Thursday, June 1, 2017. Muslims across the world are observing the holy fasting month of Ramadan, where they refrain from eating, drinking and smoking from dawn to dusk. (Photo by Dar Yasin/AP Photo) Children shelter under an umbrella during rain as they sit on sacks filled with recyclable material at a garbage dumping site on the eve of World Environment Day, in Guwahati, India June 4, 2017. (Photo by Anuwar Hazarika/Reuters) 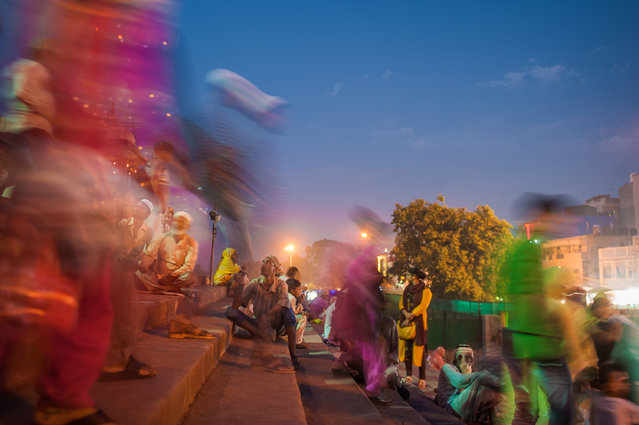 Men seek alms from Muslims on the stairs of Jamia Masjid after fatoor (breaking of fast) on 4th day of Ramadhan on May 31, 2017 in Old Delhi, India. (Photo by Shams Qari/Barcroft Images) 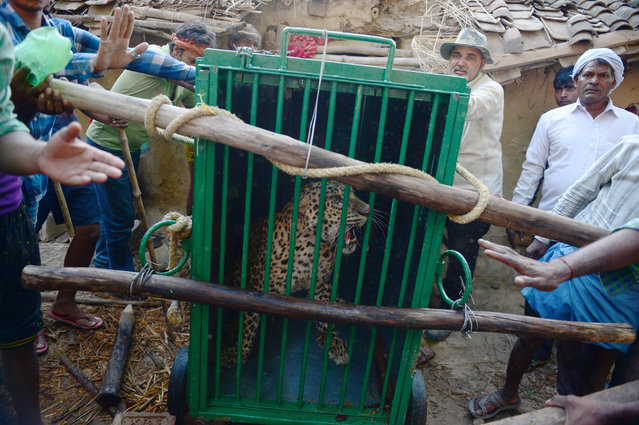 Indian villagers and forest officials use a cage to carry a leopard after it was caught in Dalapur village near Allahabad on May 31, 2017, after four people were injured in leopard attack. (Photo by Sanjay Kanojia/AFP Photo) 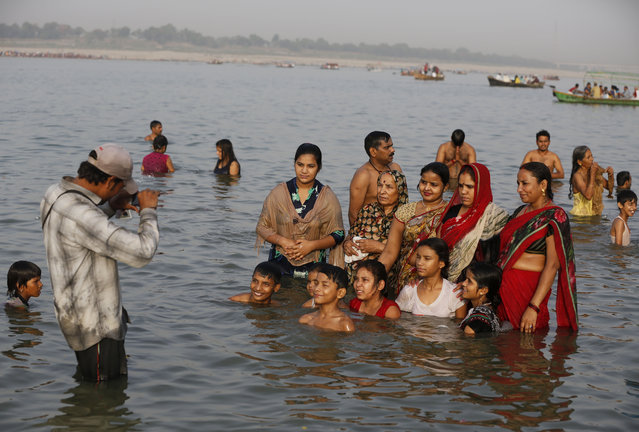 An Indian Hindu family pose for a photograph as they stand in the water at Sangam, the confluence of the Rivers Ganges, Yamuna and mythical Saraswati on Ganga Dussehra, in Allahabad, India, Sunday, June 04, 2017. Hindus across the country are celebrating Ganga Dussehra, devoted to the worship of the River Ganges. (Photo by Rajesh Kumar Singh/AP Photo) 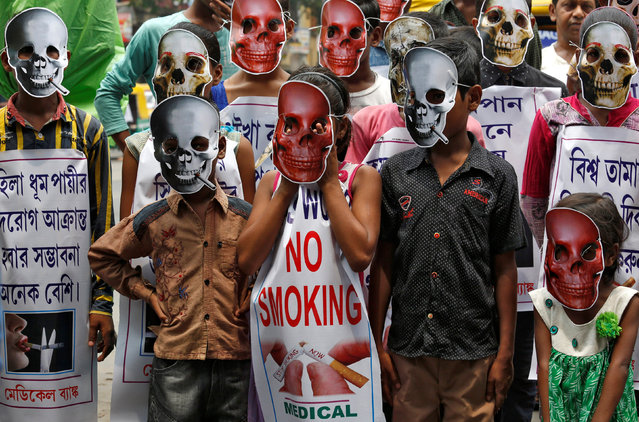 Children wearing masks at an event to mark World No Tobacco Day in Kolkata, India on May 31, 2017. (Photo by Rupak de Chowdhuri/Reuters) 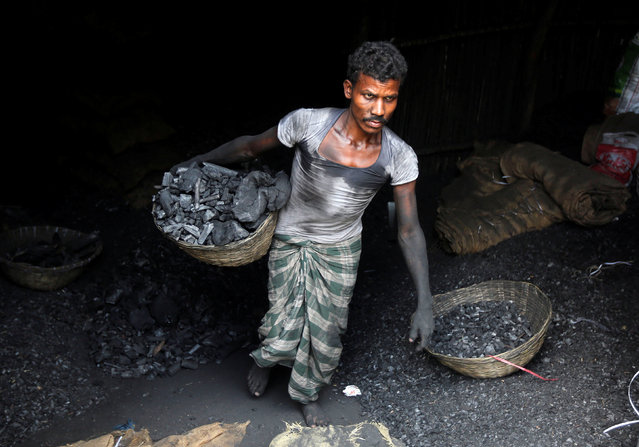 A worker carries coal in a basket in a industrial area in Mumbai, India May 31, 2017. (Photo by Shailesh Andrade/Reuters) 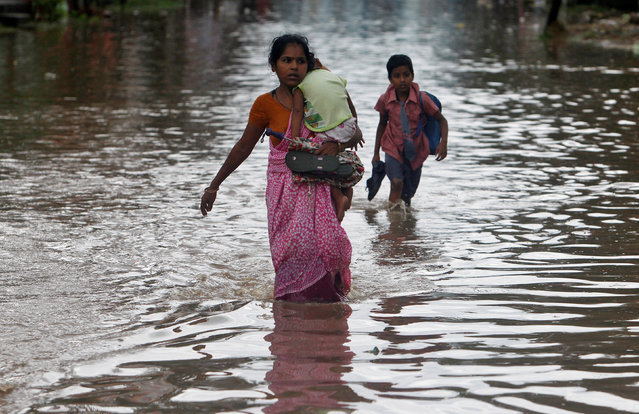 A schoolboy and a woman carrying a child wade through a flooded road after heavy rains in Agartala, India June 1, 2017. (Photo by Jayanta Dey/Reuters) 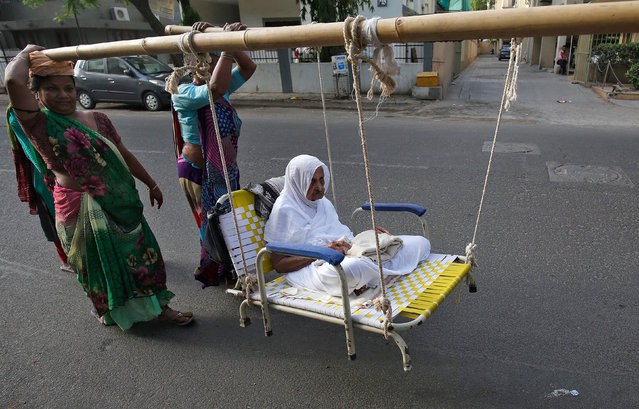 Female porters carry a holy woman belonging to the Jain community through a street to collect food from local residents living in nearby areas, during early morning in Ahmedabad, India May 31, 2017. (Photo by Amit Dave/Reuters) 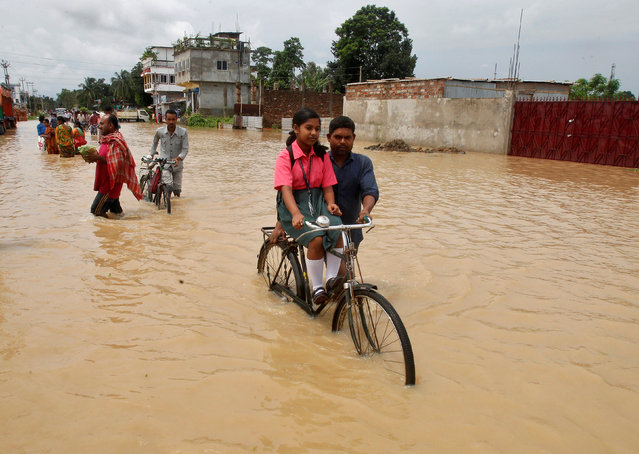 A man transports his daughter on a bicycle through a flooded road after heavy rains on the outskirt of Agartala, India June 2, 2017. (Photo by Jayanta Dey/Reuters) 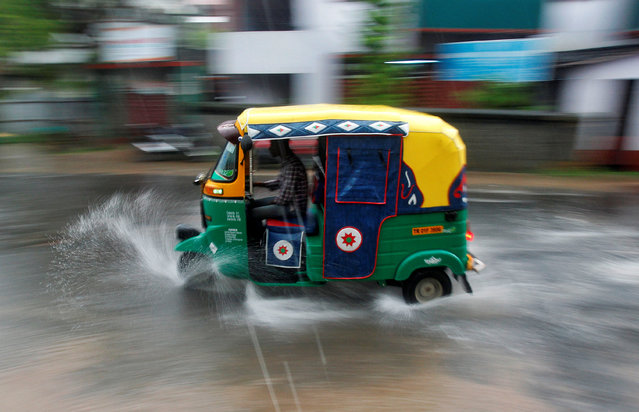 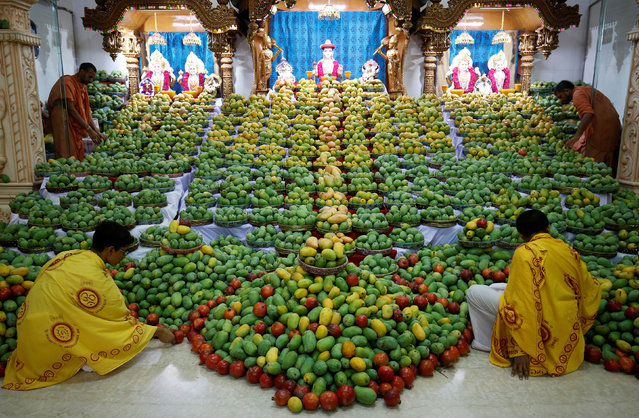 Priests arrange mangoes offered by devotees to Hindu God Swaminarayan during a mango festival at a temple in Ahmedabad, June 3, 2017. (Photo by Amit Dave/Reuters) 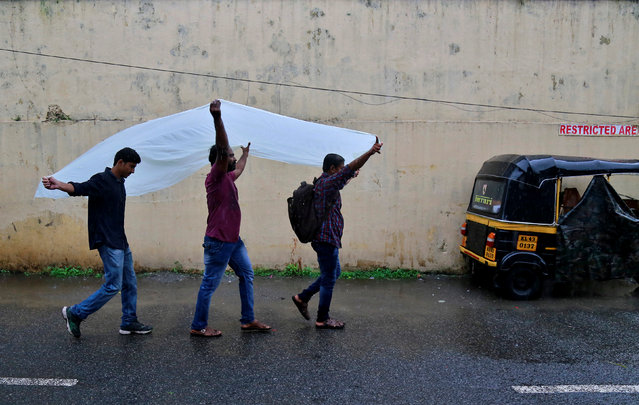 Men use a plastic sheet to cover from rain as they walk along a road in Kochi, India, May 30, 2017. (Photo by Sivaram V/Reuters) 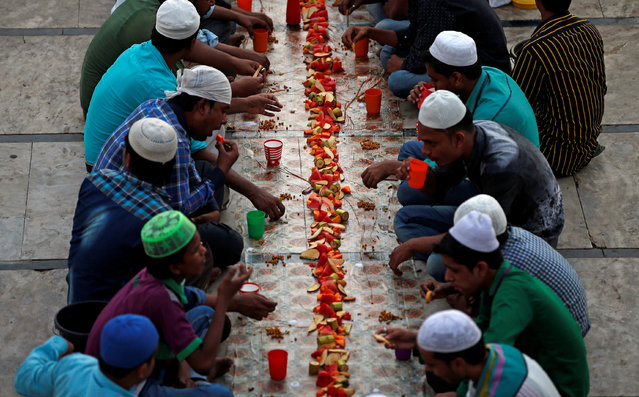 People eat their Iftar (breaking fast) meals inside a mosque during the holy month of Ramadan, in Ahmedabad, India June 1, 2017. (Photo by Amit Dave/Reuters) 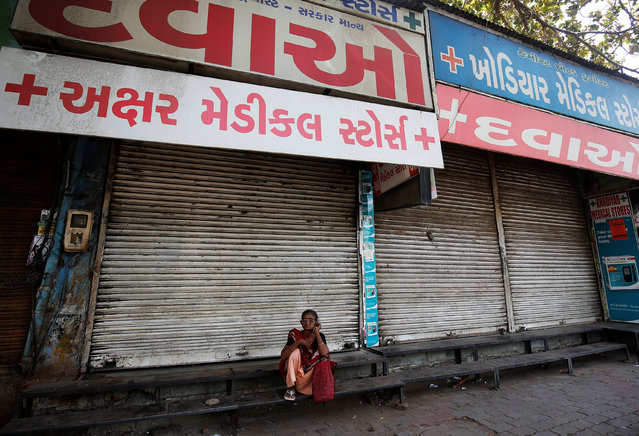 A woman sits outside a closed chemist shop during the nation wide strike by the chemists against what they say is the government's plan to regulate the sale of drugs through an e-platform, in Ahmedabad, India, May 30, 2017. (Photo by Amit Dave/Reuters) 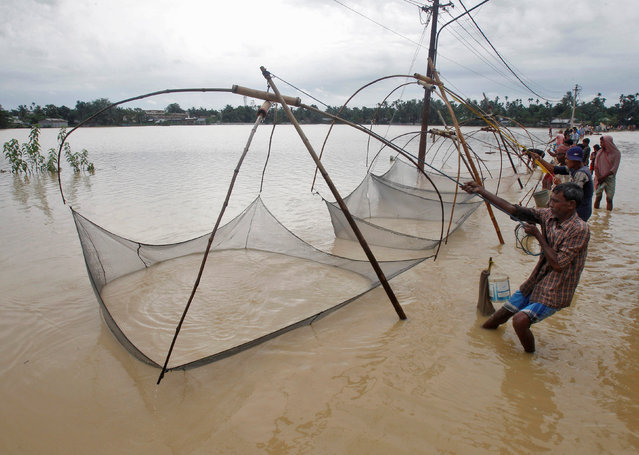 Men pull their fishing nets out from a flooded paddy field after heavy rains on the outskirts of Agartala, India June 2, 2017. (Photo by Jayanta Dey/Reuters) 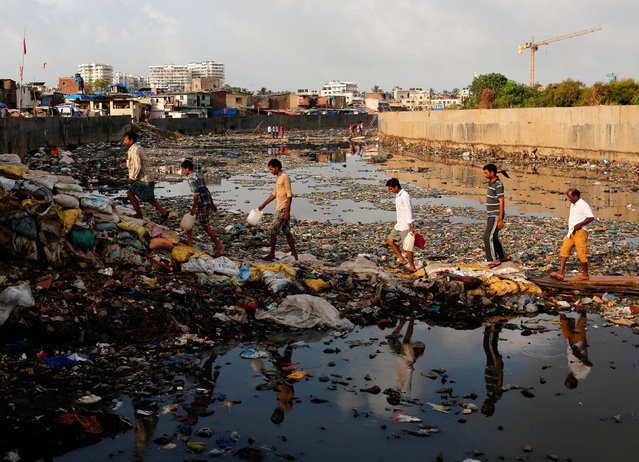 Residents cross a polluted water canal at a slum on the World Environment Day in Mumbai, India, June 5, 2017. (Photo by Danish Siddiqui/Reuters) 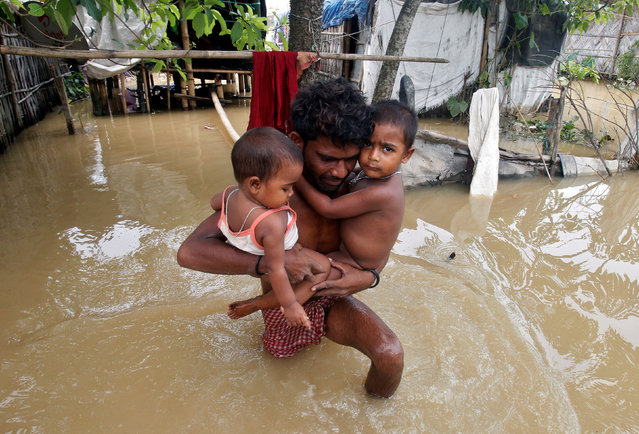 A man carries his children out of their flooded hut to move to a safer place after heavy rains, on World Environment Day, on the outskirts of Agartala, India, June 5, 2017. (Photo by Jayanta Dey/Reuters) 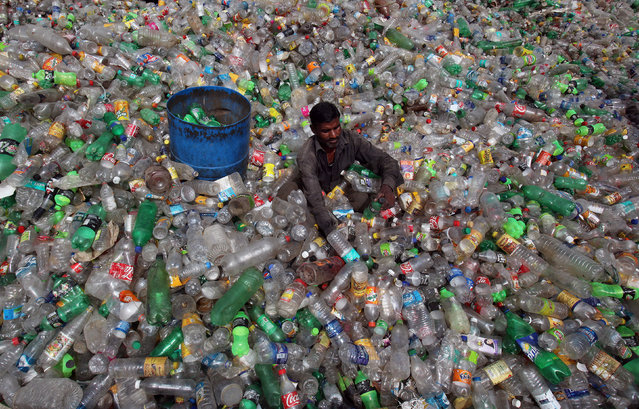 A man sorts bottles at a plastic junkyard on World Environment Day, in Chandigarh, India, June 5, 2017. (Photo by Ajay Verma/Reuters) 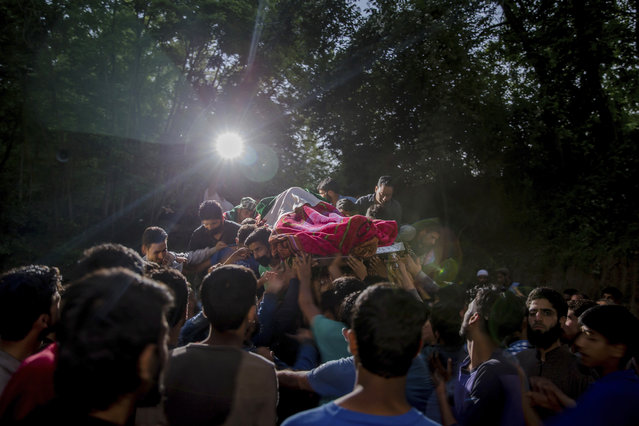 Kashmiris carry the body of rebel leader Sabzar Ahmed Bhat towards his home after displaying it to villagers in Tral area, 45 Kilometers south of Srinagar, Indian controlled Kashmir, Saturday, May 27, 2017. Bhat and a fellow militant were killed after troops cordoned off the southern Tral area overnight following a tip that rebels were hiding there, police said. (Photo by Dar Yasin/AP Photo) 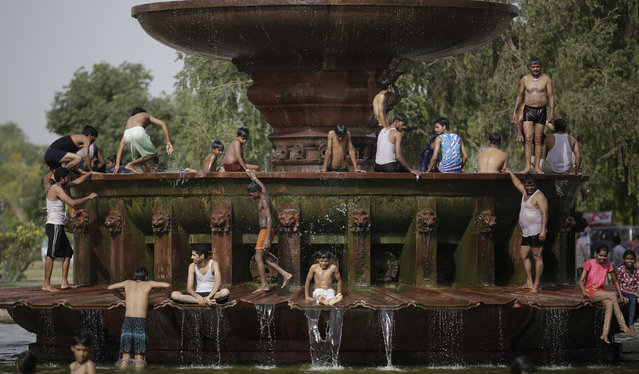 Indians cool off themselves at a fountain near the India Gate monument on a hot day in New Delhi, India, Tuesday, June 6, 2017. (Photo by Altaf Qadri/AP Photo) 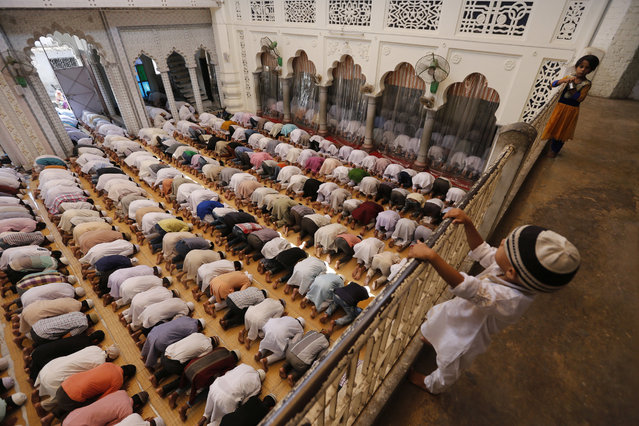 Indian Muslims offer prayers on the first Friday of the holy Islamic month of Ramadan at a mosque in Allahabad, India, Friday, June 2, 2017. Muslims throughout the world are marking the month of Ramadan, the holiest month on the Islamic calendar during which devotees fast from dawn till dusk. (Photo by Rajesh Kumar Singh/AP Photo) 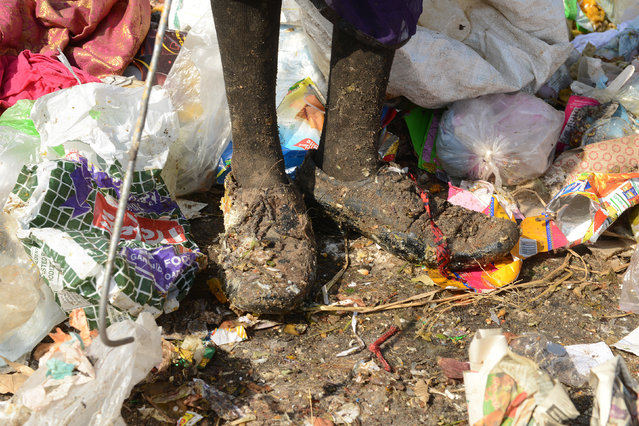 An Indian woman's feet are pictured as she collects recyclable items at a garbage dump on the outskirts of Hyderabad on June 5, 2017, on World Environment Day. The UN declared the 2017 theme for World Environment Day is “Connecting People to Nature”. (Photo by Noah Seelam/AFP Photo) 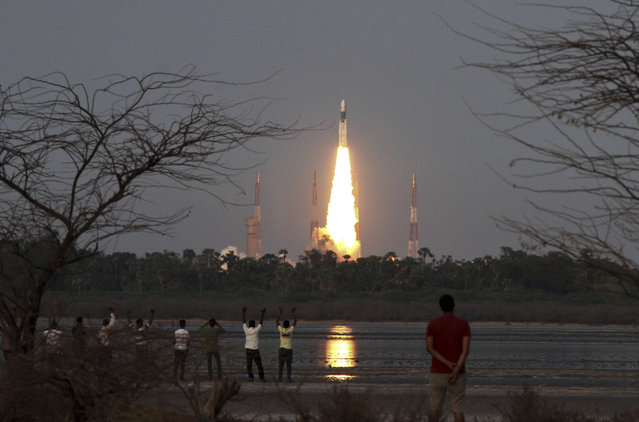 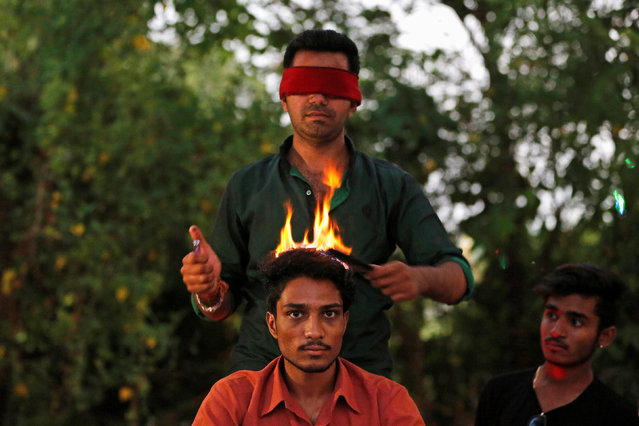 Vishnu Limbachiya, a hair artist, styles the hair of a man while wearing a blindfold at a park in Ahmedabad, India, May 31, 2017. (Photo by Amit Dave/Reuters) 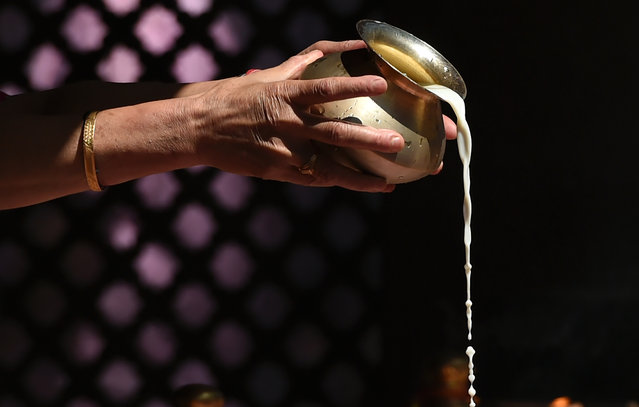 A Kashmiri Pandit pours milk onto statues of Hindu gods during the annual Hindu festival at the Khirbhawani temple in the village of Tullamulla, some 30kms east of Srinagar on June 2, 2017. Hundrends of Kashmiri Hindus, many of whom were displaced more than two decades ago, attended the festival to worship the Hindu goddess Mata Khirbhawani on the day of her birth. Some 200,000 Kashmiri Pandits fled the region in the early nineties at the start of an insurgency against Indian rule, mainly to the Hindu-dominated southern city of Jammu and return yearly for the festival. (Photo by Tauseef Mustafa/AFP Photo)
Edit Del
07 Jun 2017 07:32:00, post received 0 comments
Publication archive:
←   →
Popular tags:
All tags
Last searches: