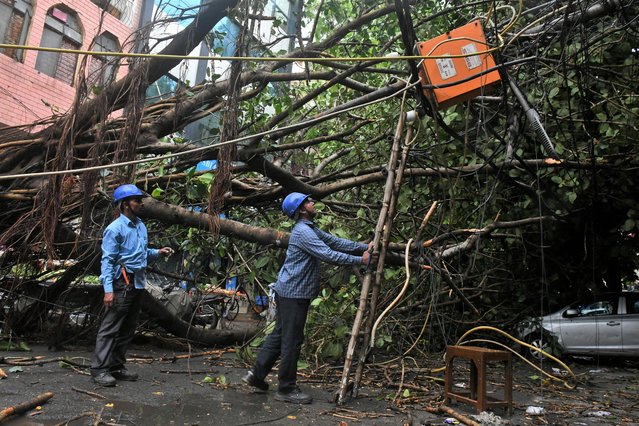 Men try to repair a damaged pole next to a fallen tree after heavy wind and rain in New Delhi, India on May 30, 2022. (Photo by Shashi Shekhar Kashyap/Reuters) 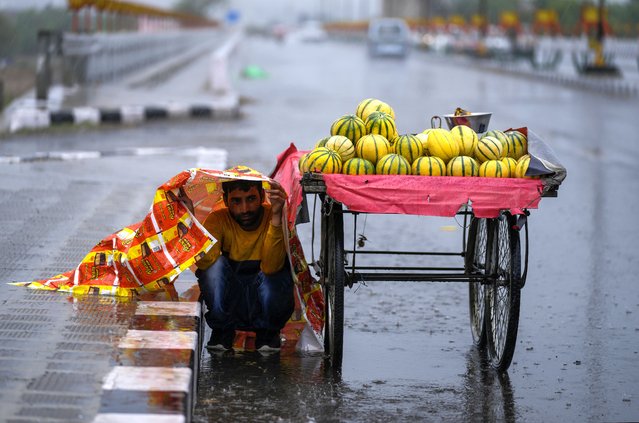 An Indian fruit vendor covers himself with a plastic sheet as it rains in Jammu, India, Monday, May 30, 2022. (Photo by Channi Anand/AP Photo) 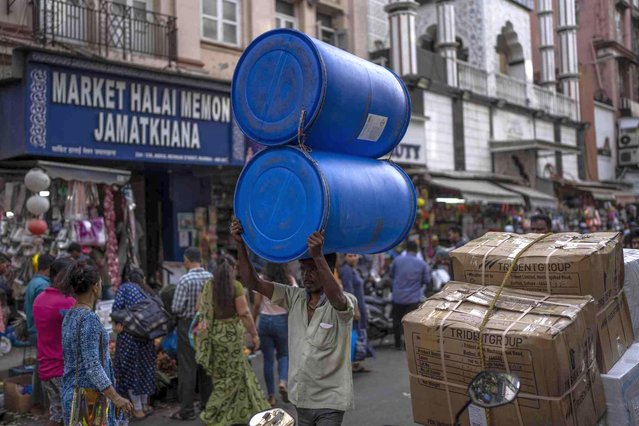 A daily wage worker carries plastic drums at a market in Mumbai, India, Monday, May 30, 2022. (Photo by Rafiq Maqbool/AP Photo) 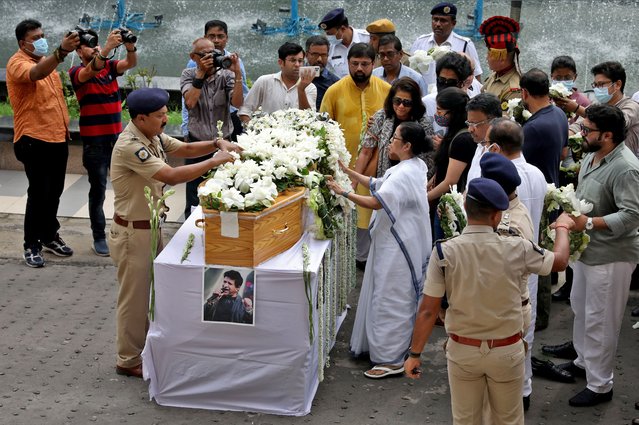 Mamata Banerjee, Chief Minister of the eastern state of West Bengal, places a wreath on the coffin containing the body of Indian singer Krishnakumar Kunnath, better known as KK, before a gun salute in Kolkata, India, June 1, 2022. (Photo by Rupak De Chowdhuri/Reuters) 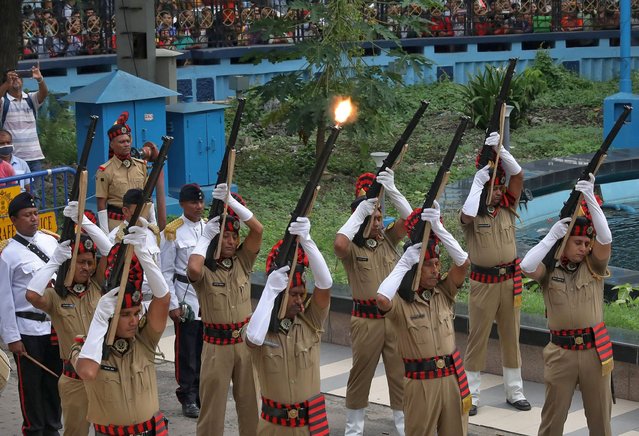 Policemen offer a gun salute next to the coffin containing the body of Indian singer Krishnakumar Kunnath, better known as KK, in Kolkata, India, June 1, 2022. (Photo by Rupak De Chowdhuri/Reuters) 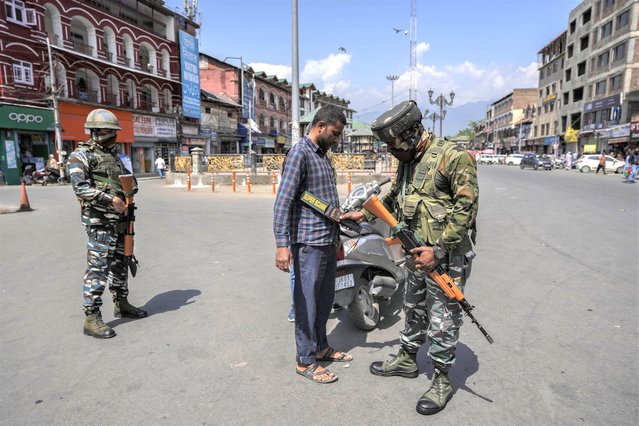 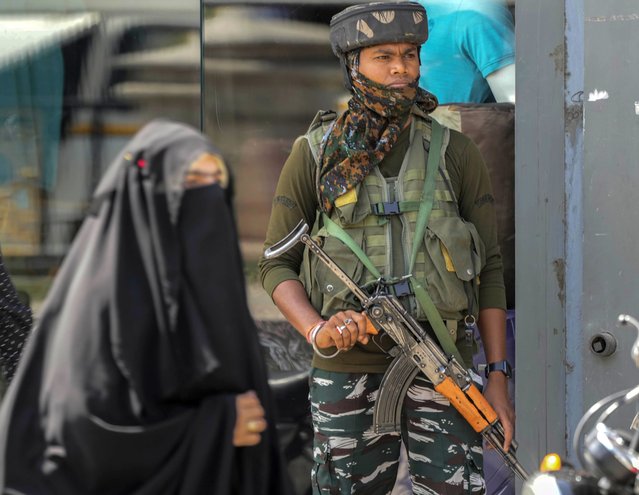 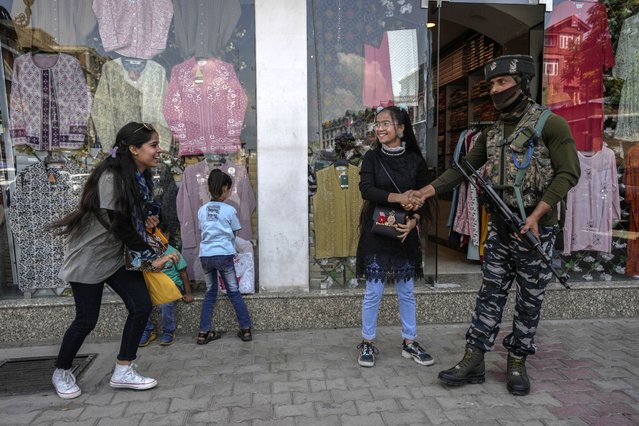 An Indian tourist girl shakes hand with a paramilitary soldier as he guards at a market in Srinagar, Indian controlled Kashmir, Thursday, June 2, 2022. (Photo by Mukhtar Khan/AP Photo) 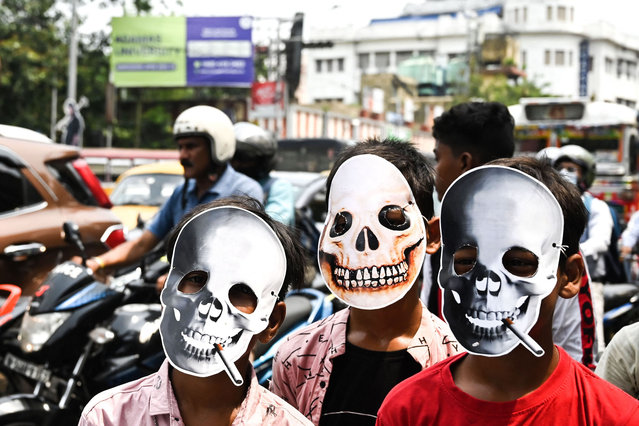 School children wear face masks as they take part in an awareness rally against the use of tobacco on “World No Tobacco Day” in Kolkata on May 31, 2022. (Photo by Dibyangshu Sarkar/AFP Photo) 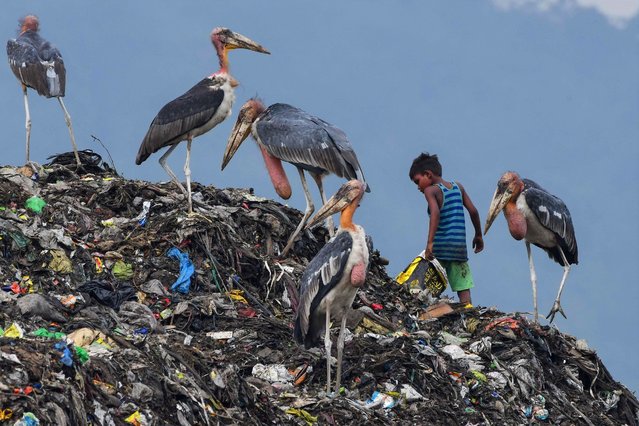 A boy searches for recyclable materials next to greater adjutant storks at a garbage dumpsite in Guwahati on June 4, 2022. (Photo by Biju Boro/AFP Photo) 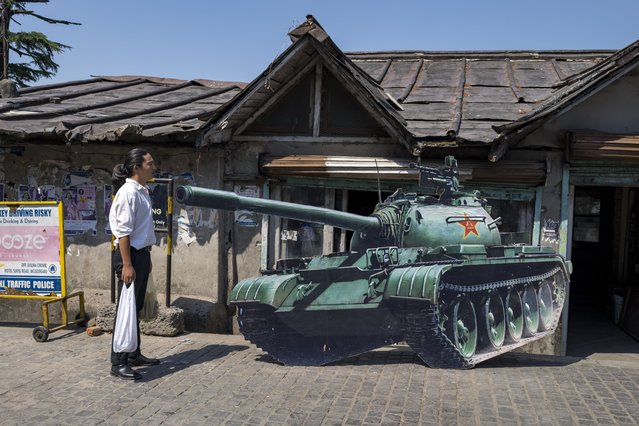 A young exile Tibetan stands in front of a cardboard cutout of a tank to replicate the “tank man”, an iconic moment in the Tiananmen Square pro-democracy protests in 1989, in Dharmsala, India, Saturday, June 4, 2022. Saturday marks the anniversary of China’s bloody 1989 crackdown on pro-democracy protests at Beijing’s Tiananmen Square. (Photo by Ashwini Bhatia/AP Photo) 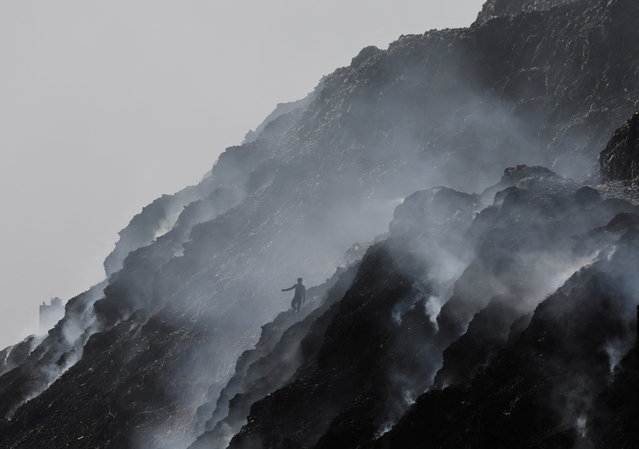 A waste collector climbs down while looking for recyclable materials as smoke billows from burning garbage at the Bhalswa landfill site on World Environment Day in New Delhi, India, June 5, 2022. (Photo by Anushree Fadnavis/Reuters) 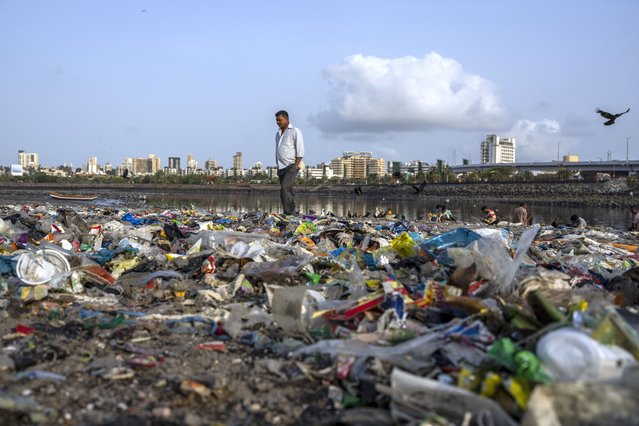 A man walks past plastic and other garbage littered on the shores of the Arabian Sea on World Environment Day, in Mumbai, India, Sunday, June 5, 2022. (Photo by Rafiq Maqbool/AP Photo) 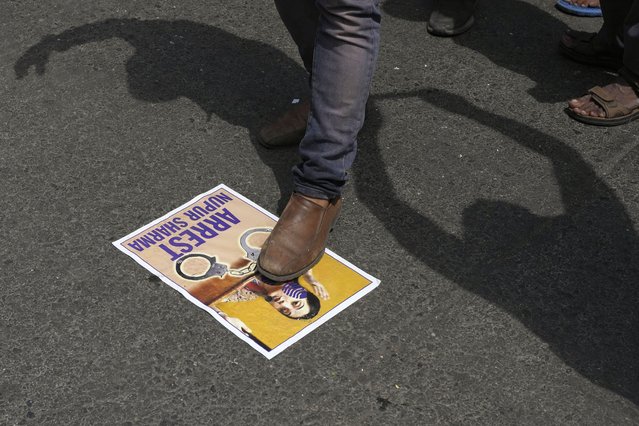 An Indian Muslim stamps on a photo of Nupur Sharma, a spokesperson of governing Hindu nationalist party as they react to the derogatory references to Islam and the Prophet Muhammad made by her during a protest in Mumbai, India, Monday, June 6, 2022. At least five Arab nations have lodged official protests against India, and Pakistan and Afghanistan also reacted strongly Monday to the comments made by two prominent spokespeople from Prime Minister Narendra Modi's Bharatiya Janata Party. (Photo by Rafiq Maqbool/AP Photo) 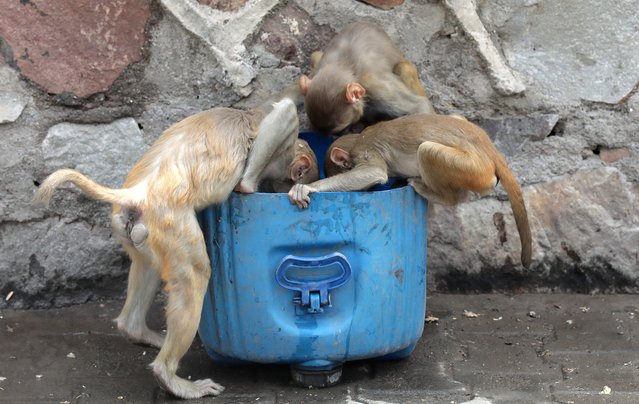 Monkeys drink water from a bucket in scorching heat in ridge area in New Delhi, India, 07 June 2022. Animals and birds have also been impacted due to heat wave in India. According to the Indian Meteorological Department (IMD), heat wave will continue till 09 June 2022 in Delhi state and the National Capital Region. (Photo by Rajat Gupta/EPA/EFE) 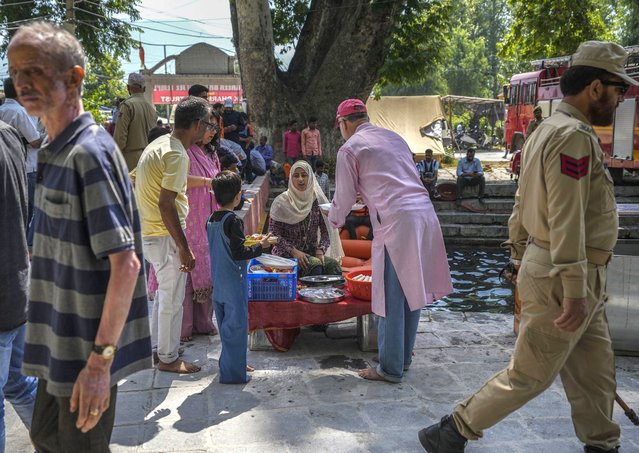 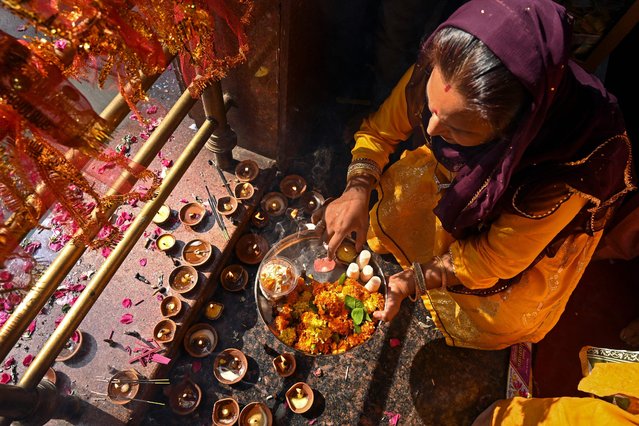 A Hindu devotee performs a religious ritual during the annual “Mela Kheer Bhawani” festival at a temple in Tullamulla village on the outskirts of Srinagar on June 8, 2022. (Photo by Tauseef Mustafa/AFP Photo) 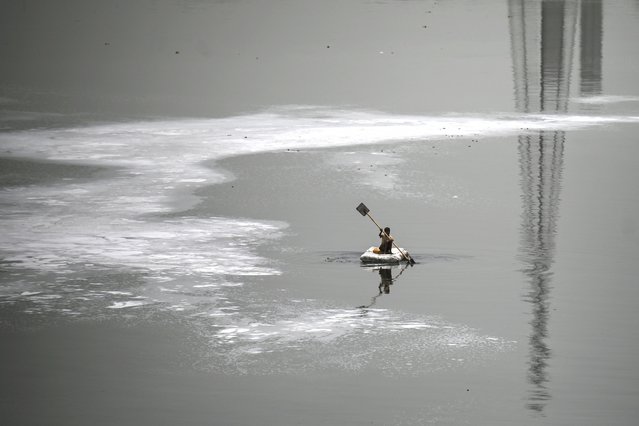 A boy rows a boat across the polluted waters of river Yamuna laden with foam, on a hot summer day in New Delhi on June 9, 2022. (Photo by Money Sharma/AFP Photo) 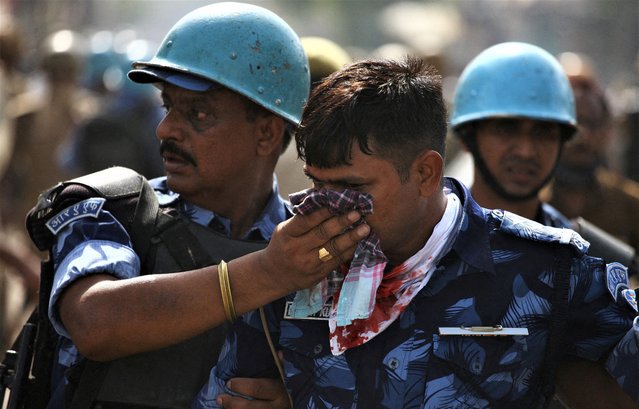 A policeman is being helped by his colleagues after he was injured during a protest against a Bharatiya Janata Party (BJP) member Nupur Sharma for her comments on Prophet Mohammed, in Prayagraj, India on June 10, 2022. (Photo by Ritesh Shukla/Reuters) 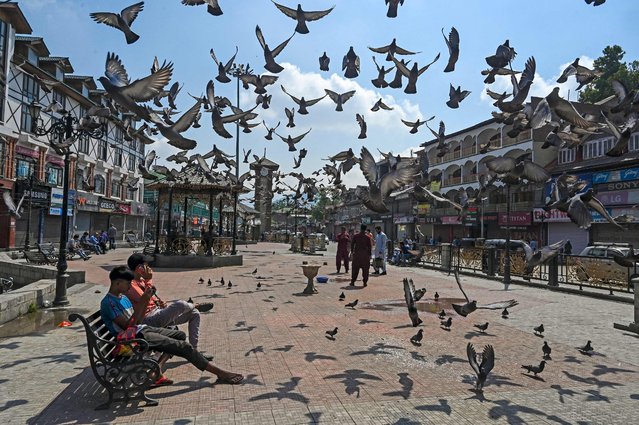 People sit on a bench along a street during a curfew in Srinagar on June 10, 2022. A spontaneous curfew in Srinagar against former India's Bharatiya Janata Party spokeswoman Nupur Sharma over her remarks about Prophet Mohammed. Her incendiary remarks on the Prophet Mohammed sparked outrage from the Islamic world and a diplomatic furore, but Nupur Sharma has long been a firebrand mouthpiece for India's Hindu nationalist government. (Photo by Tauseef Mustafa/AFP Photo)
Edit Del
18 Jun 2022 04:28:00, post received 0 comments
Publication archive:
←   →
Popular tags:
All tags
Last searches: