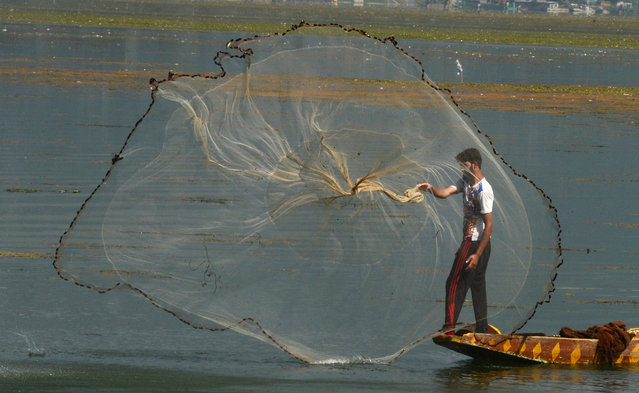 A Kashmiri fisherman throws net from a shikara, a traditional gondola, on Dal Lake in Srinagar on August 11, 2015. (Photo by Tauseef Mustafa/AFP Photo) 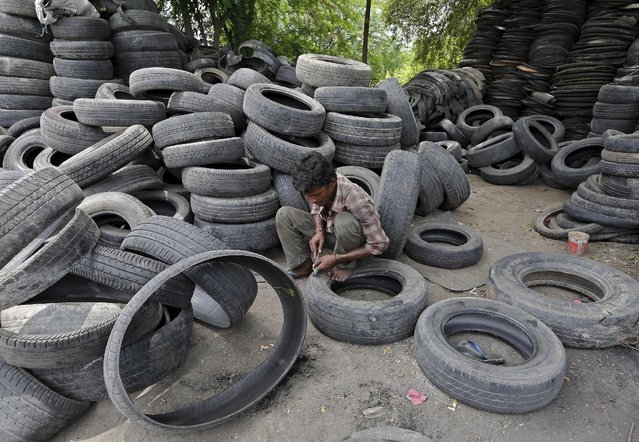 A man works at a tyre recycling unit on the outskirts of Ahmedabad, India, August 11, 2015. India's natural rubber production is likely to sink as much as 15 percent to its lowest in nearly two decades as farmers suspend tapping due to falling prices, rubber and tyre industry officials said. (Photo by Amit Dave/Reuters) 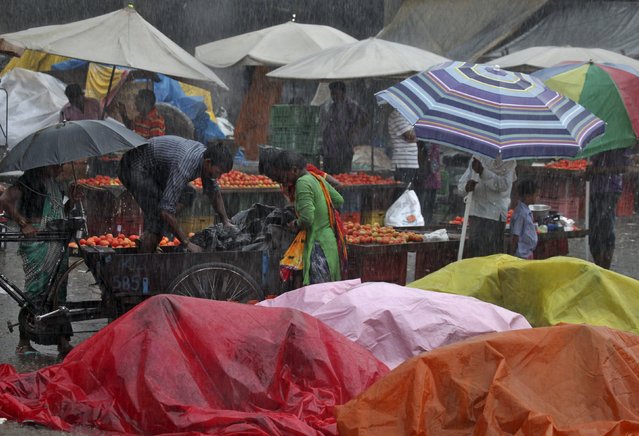 Vendors take shelter under plastic tarpaulins as others work during a heavy rain shower at a wholesale vegetable market in Chandigarh, India, August 11, 2015. India has received 6 percent lower rainfall than usual, but in some areas rainfall deficit is as high as 57 percent, India Meteorological Department (IMD) data showed. (Photo by Ajay Verma/Reuters) 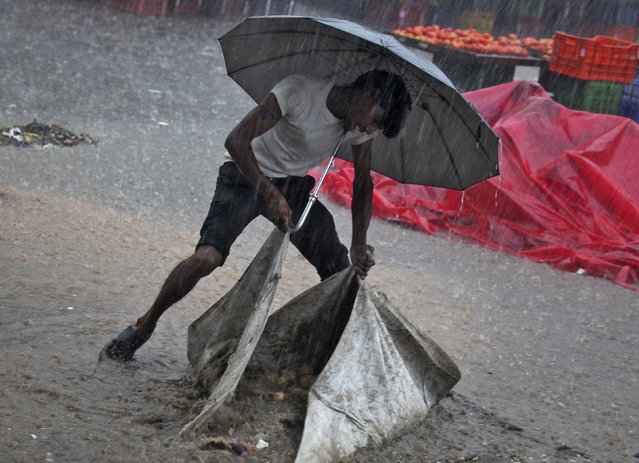 A vendor uses an umbrella as he tries to gather potatoes during a heavy rain shower at a wholesale vegetable market in Chandigarh, India, August 11, 2015. (Photo by Ajay Verma/Reuters) 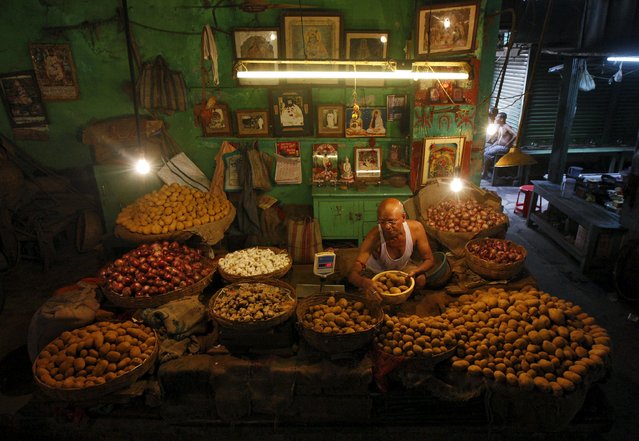 A vendor weighs potatoes for a customer (not pictured) in his shop at a vegetable market in Kolkata, India, August 12, 2015. India's retail inflation likely cooled in July as food price rises stayed in check, while factory output grew slightly faster in June, a Reuters poll found this week. (Photo by Rupak De Chowdhuri/Reuters) 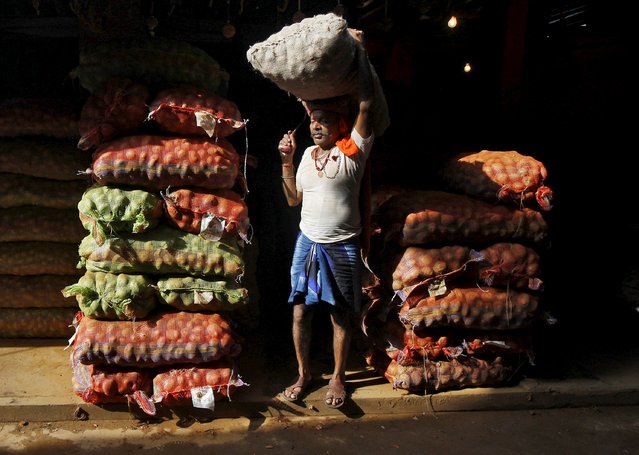 A labourer carries a sack of onions at a vegetable market in Kolkata, India, August 12, 2015. (Photo by Rupak De Chowdhuri/Reuters) 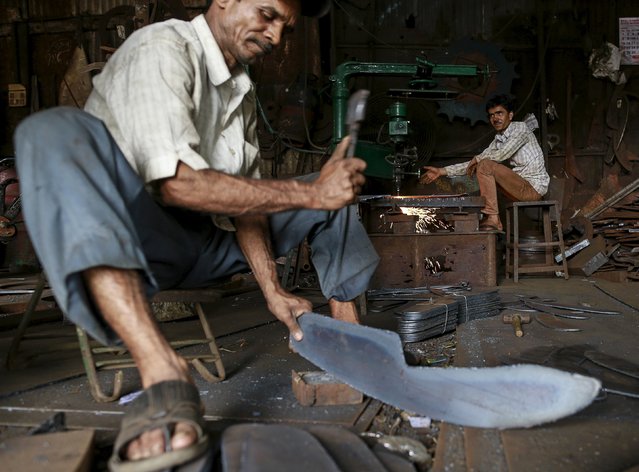 Workers cut and shape metal parts used in heavy machinery inside a workshop at an industrial area i in Mumbai, India, August 12, 2015. India's annual industrial output growth quickened to 3.8 percent in June from a downwardly revised 2.5 percent growth a month ago, government data showed on Wednesday. (Photo by Danish Siddiqui/Reuters) 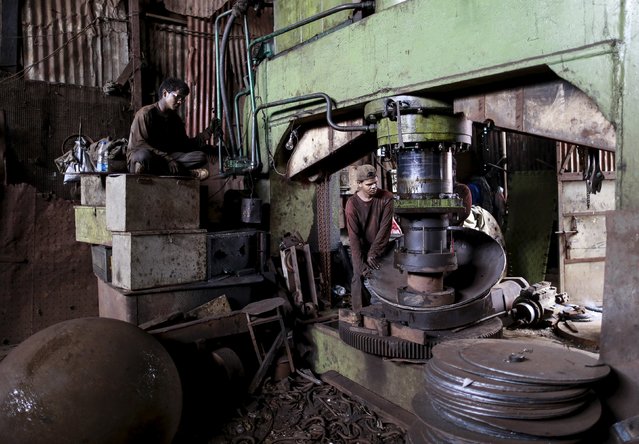 Workers shape an iron sheet into a pan inside a workshop at an industrial area in Mumbai, India, August 12, 2015. (Photo by Danish Siddiqui/Reuters) 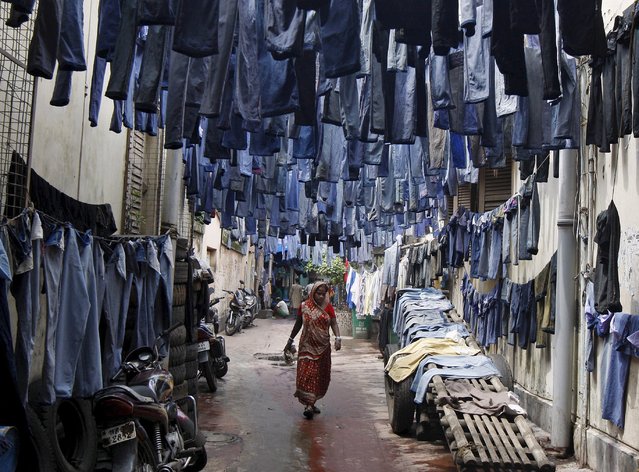 A woman walks through an alley as used pairs of jeans are hung to dry before they are sold in a second-hand clothes market in Kolkata, India, in this June 29, 2015 file photo. (Photo by Rupak De Chowdhuri/Reuters) 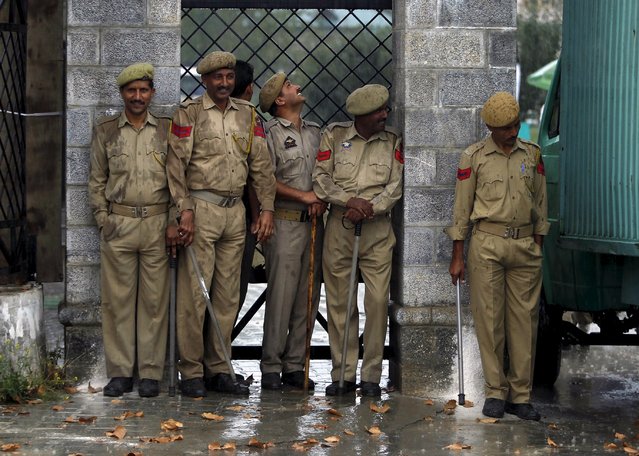 Indian policemen take shelter from rains as Kashmiri Haj pilgrims (unseen) depart for Mecca, in Srinagar August 17, 2015. The first batch of 680 Kashmiri Haj pilgrims set off on Monday for the annual pilgrimage to the holiest place for Muslims, authorities said. (Photo by Danish Ismail/Reuters) 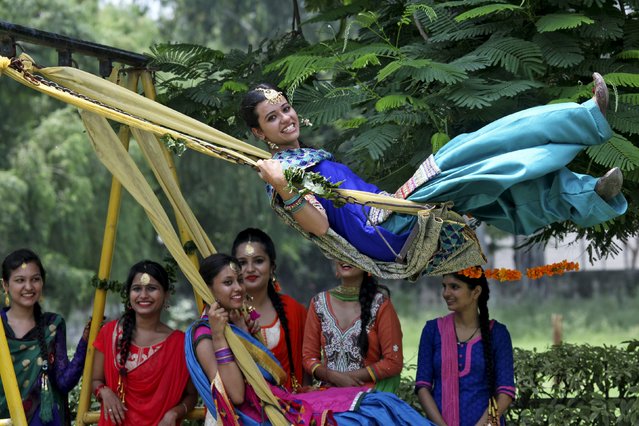 Traditionally dressed girls play on swings during the Teej festival in Chandigarh, India, August 17, 2015. Teej falls in the Hindu month of Shrawan (July-August) and welcomes the advent of the monsoon. (Photo by Ajay Verma/Reuters) 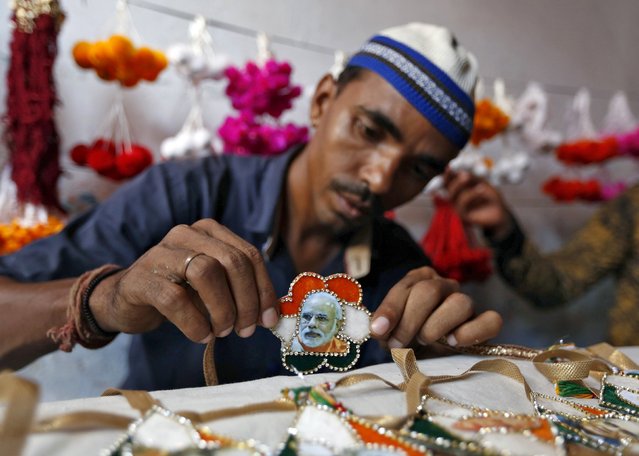 A Muslim artisan displays a “rakhi” or traditional Indian sacred thread, featuring India's Prime Minister Narendra Modi after giving it the finishing touches inside a workshop in Ahmedabad August 17, 2015. Rakhi is also the name of a Hindu festival, also known as Raksha Bandhan, during which a sister ties one or more of the sacred threads onto her brother's wrist to ask him for her protection. The festival will be celebrated across the country on August 29 this year. (Photo by Amit Dave/Reuters) 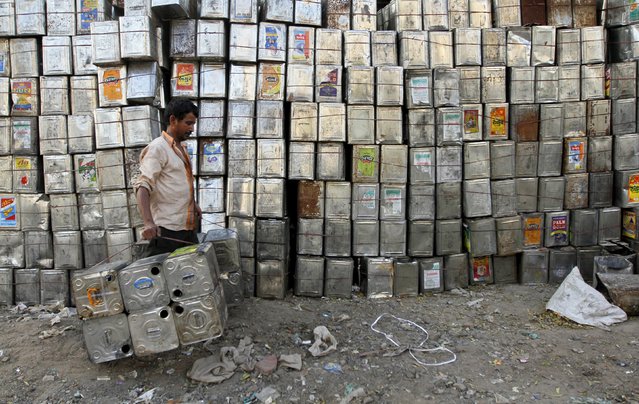 A man carries empty aluminium tins used for edible oil past a stack of tins at a recycling yard in the western Indian city of Ahmedabad, in this October 18, 2011 file photo. India plans to spend $1.5 billion in the next three years to help farmers grow oil palm trees in an area the size of New Jersey, government sources said, with Prime Minister Narendra Modi pushing to make the nation self-sufficient in edible oils this decade. (Photo by Amit Dave/Reuters) 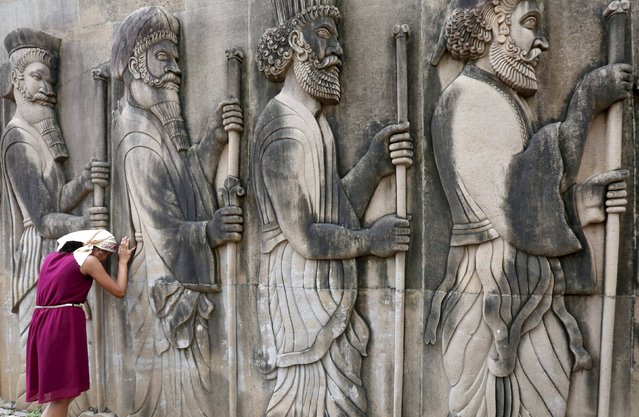 A Parsi girl touches the walls of a Parsi fire temple featuring huge carvings of ancient priests during the Parsi New Year day in Mumbai August 18, 2015. The Parsis, descendants of Persian Zoroastrians, immigrated to the Indian subcontinent more than 1,000 years ago to escape religious persecution after the Islamic conquest. (Photo by Shailesh Andrade/Reuters) 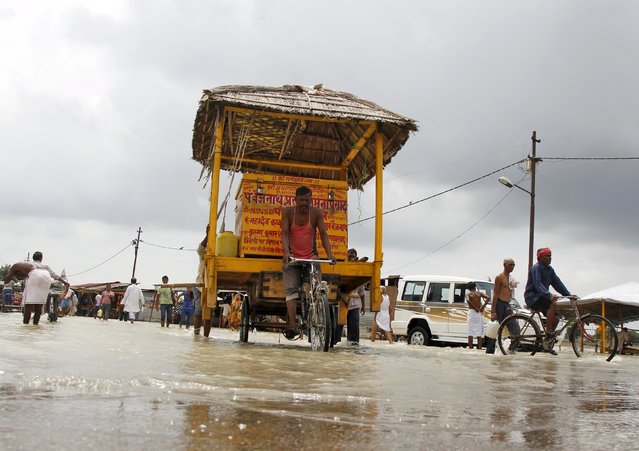 A man transports the belongings of Hindu priests, who normally set up stalls along the banks of river Ganges, to safer ground after a heavy downpour caused the rise in water levels in the river in Allahabad, India August 18, 2015. (Photo by Jitendra Prakash/Reuters) 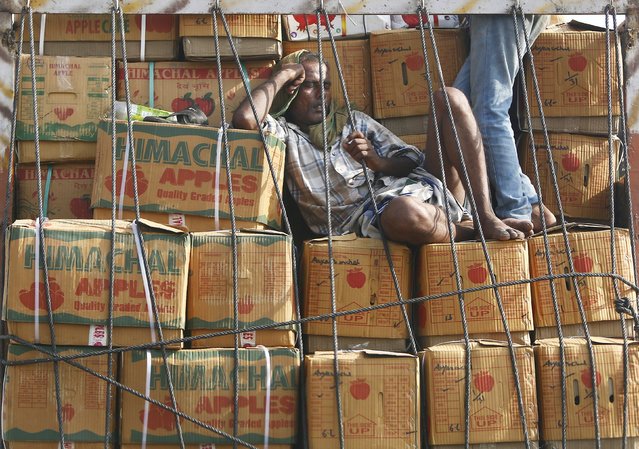 A labourer takes a nap on boxes filled with apples loaded in a supply vehicle at a marketplace on a hot day in New Delhi, India, August 18, 2015. (Photo by Anindito Mukherjee/Reuters) 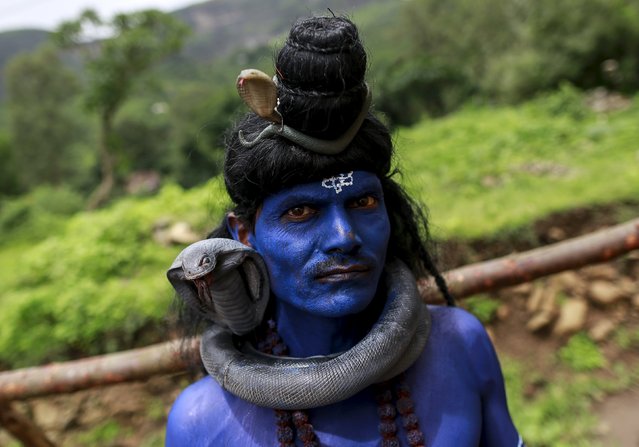 A devotee dressed as Hindu Lord Shiva waits to participate in a parade during “Kumbh Mela” or the Pitcher Festival in Trimbakeshwar, India, August 18, 2015. The Kumbh Mela takes place four times every 12 years at four different river bank locations in India. (Photo by Danish Siddiqui/Reuters) 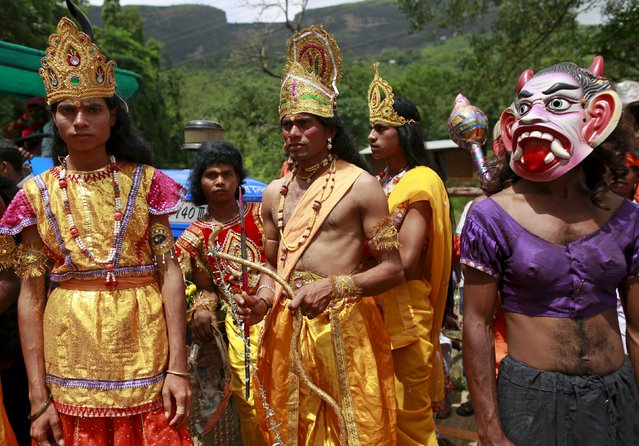 Devotees dressed as Hindu mythological characters wait to participate in a parade during “Kumbh Mela” or the Pitcher Festival in Trimbakeshwar, India, August 18, 2015. (Photo by Danish Siddiqui/Reuters) 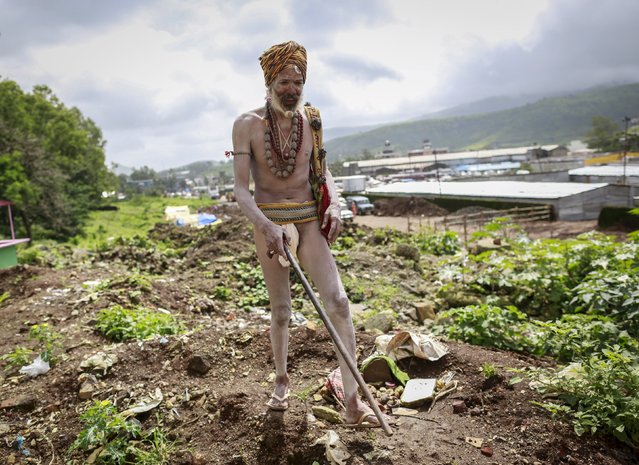 A Naga Sadhu or a Hindu holy man arrives at his makeshift tent outside a temple during “Kumbh Mela” in Trimbakeshwar, India, August 18, 2015. (Photo by Danish Siddiqui/Reuters) 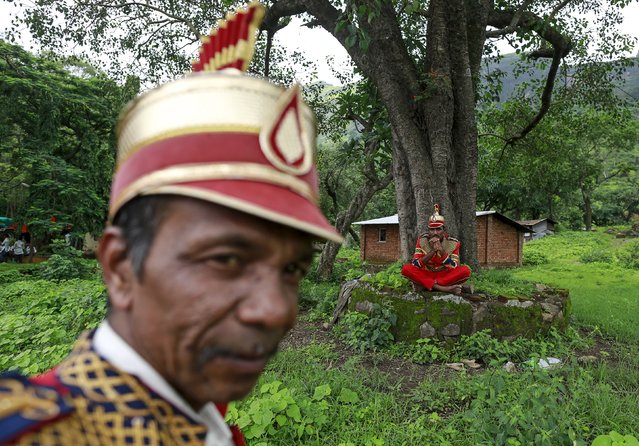 Musicians rest as they wait to take part in a parade during the “Kumbh Mela” or the Pitcher Festival in Trimbakeshwar, India, August 18, 2015. (Photo by Danish Siddiqui/Reuters) 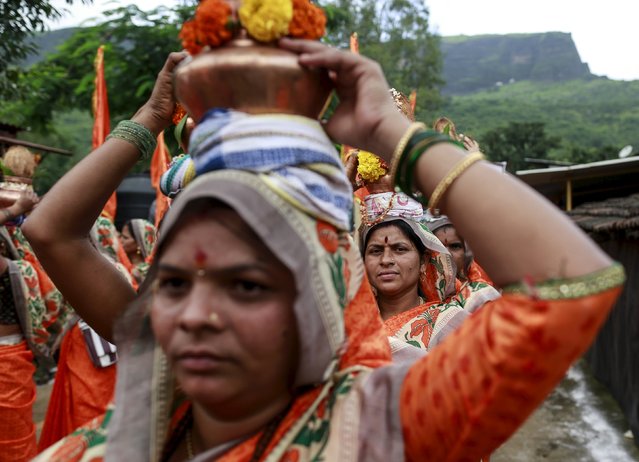 Devotees carry metal pitchers as they participate in a parade during “Kumbh Mela” or the Pitcher Festival in Trimbakeshwar, India, August 18, 2015. (Photo by Danish Siddiqui/Reuters) 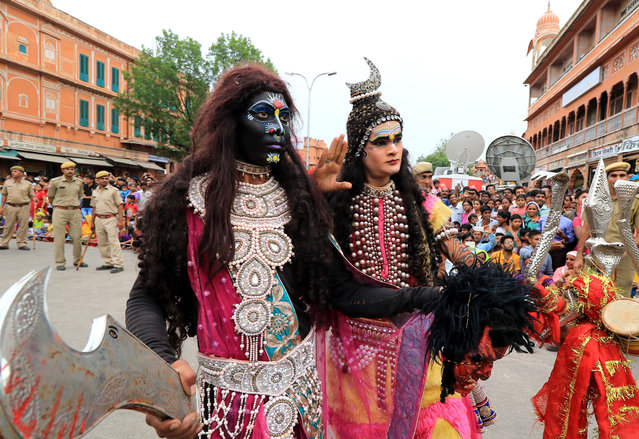 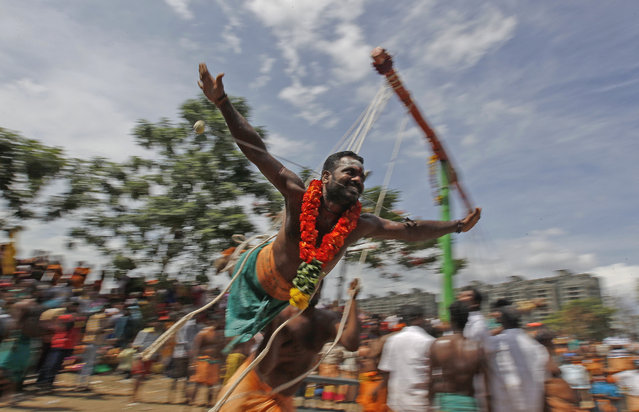 A Hindu devotee hanging from a pole with hooks pierced to his back is rotated by another as he performs a ritual on the occasion of “Aadi” fest in Chennai, India, Sunday, August 9, 2015. Aadi is considered a holy month by Tamils and is celebrated with rituals worshipping Hindu goddess Durga. (Photo by Arun Sankar K./AP Photo) 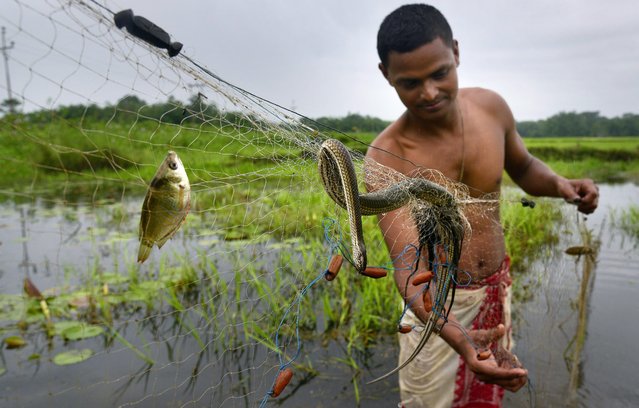 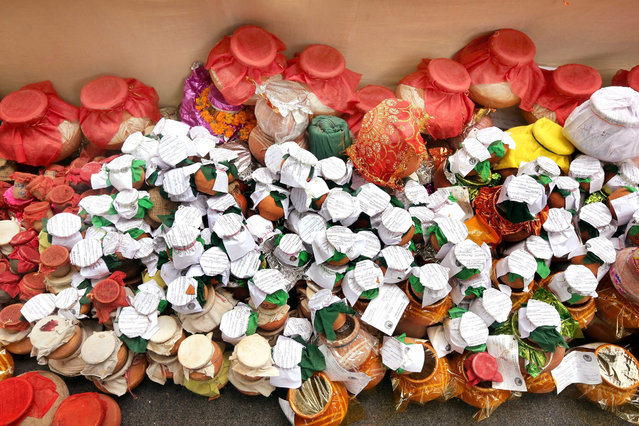 Earthen pots filled and covered with the mud from the various agriculture based villages are seen during a protest against the land acquisition bill in New Delhi, India, 10 August 2015. Hundreds of farmers from all over India staged a protest over a bill that eases rules for acquiring farmer's land for large projects and new bill would waive consent clauses for some projects including defence and rural infrastructure schemes that previously required approval by up to 80 per cent of landowners affected. (Photo by Harish Tyagi/EPA) 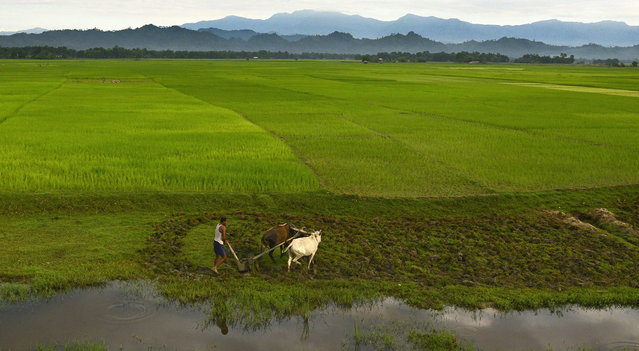 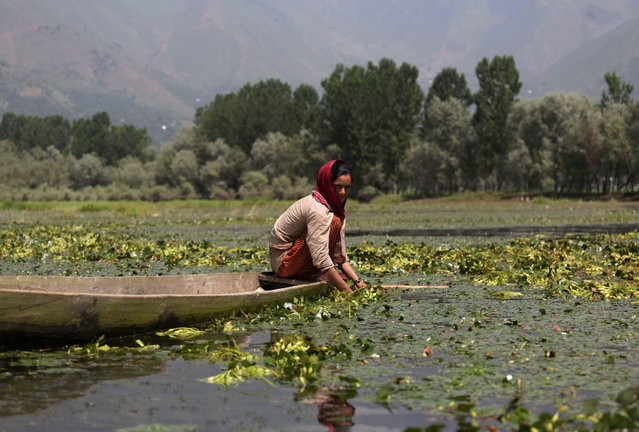 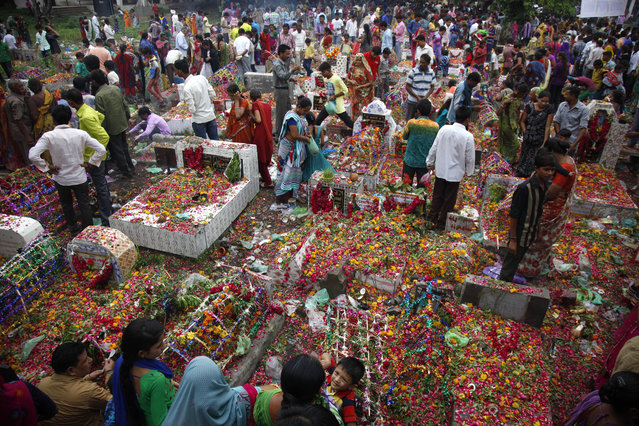 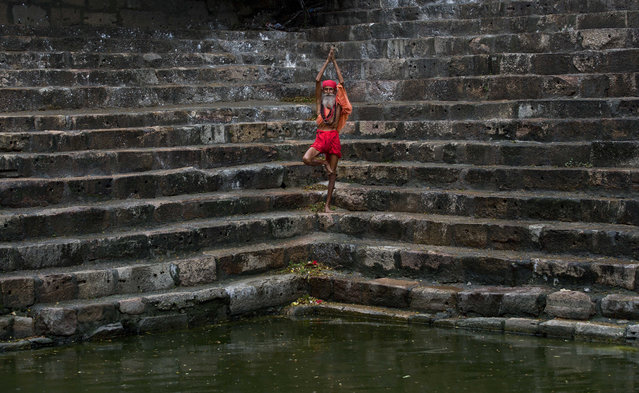 A Sadhu or Hindu holy man performs yoga on the steps of Saubhagya Kund, a holy pond, at the Kamakhya temple in Gauhati, India, Tuesday, June 23, 2015. Hundreds of Sadhus, or Hindu holy men, have arrived for the five-day festival to perform rituals at the temple during the annual Ambubasi festival that began Monday. (Photo by Anupam Nath/AP Photo)
Edit Del
19 Aug 2015 12:23:00, post received 0 comments
Publication archive:
←   →
Popular tags:
All tags
Last searches: