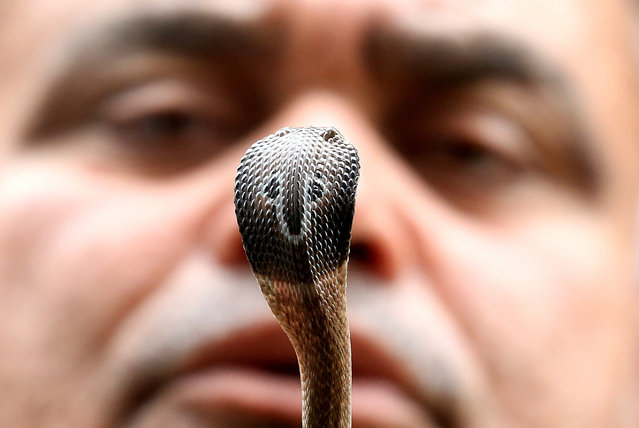 Mohammed Saleem, a snake catcher commonly known as Saleem Saap wale shows a baby cobra retrieved from a residential area near Bhopal in Madhya Pradesh, India, 03 August 2018. Hundreds of snakes come out towards the residential area of Bhopal every month due to the humidity and ongoing rainy season. Mohammed Saleem has been serving the society for the last 37 years and has caught thousands of snakes of different types including Cobra, Russell wiper, Python, and red snakes. Saleem also tries to eradicate superstitions and myths associated with snakes by conducting workshops in schools and other public gatherings. (Photo by Sanjeev Gupta/EPA/EFE) 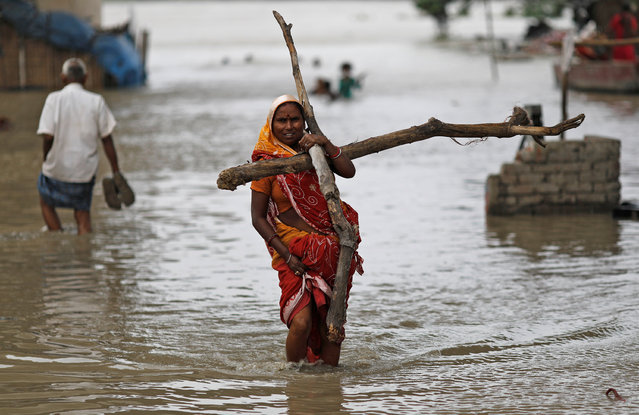 A woman wades through a flooded street carrying logs of wood to be used to reinforce her shanty submerged in a slum area after a rise in the waters of the river Yamuna in New Delhi, India, July 31, 2018. (Photo by Adnan Abidi/Reuters) 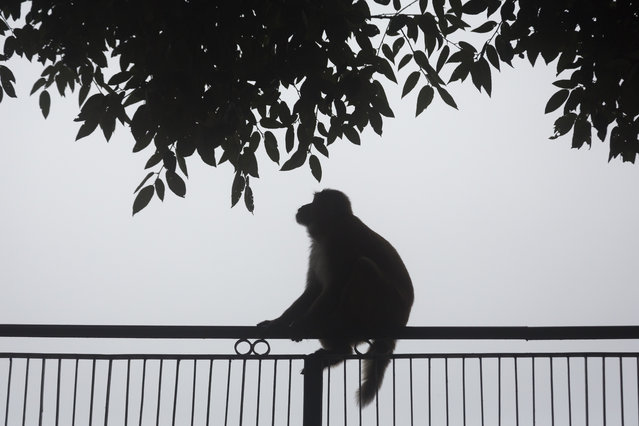 A macaque is silhouetted against a thick fog in Dharmsala, India, Sunday, August 12, 2018. Fog is common during the monsoon season in this mountain region. (Photo by Ashwini Bhatia/AP Photo) 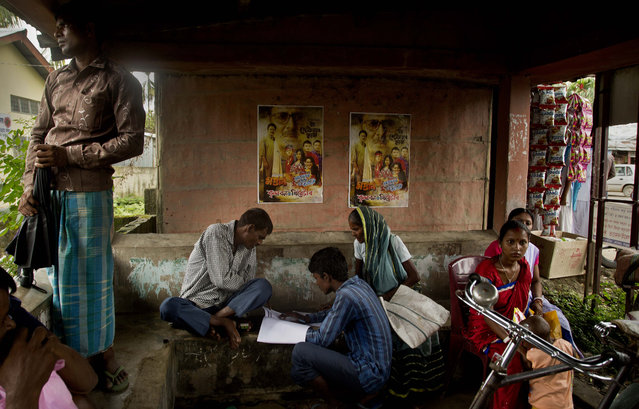 People whose names were left out in the National Register of Citizens (NRC) draft fill up forms to file appeals near a NRC center on the outskirts of Gauhati, Assam state, India, Monday, August 13, 2018. A draft list of citizens in Assam, released in July, put nearly 4 million people on edge to prove their Indian nationality. (Photo by Anupam Nath/AP Photo) 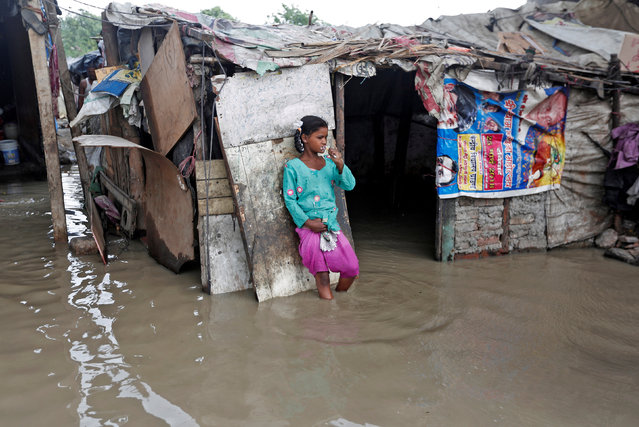 A girl brushes her teeth as she stands outside her submerged shanty at a slum area after a rise in the waters of the river Yamuna in New Delhi, India, July 31, 2018. (Photo by Adnan Abidi/Reuters) 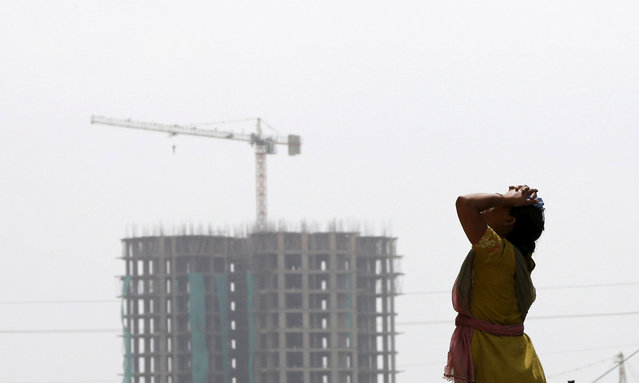 A labourer takes a break from her work at the construction site of a residential complex in Noida on the outskirts of New Delhi, India, August 20, 2015. (Photo by Adnan Abidi/Reuters) 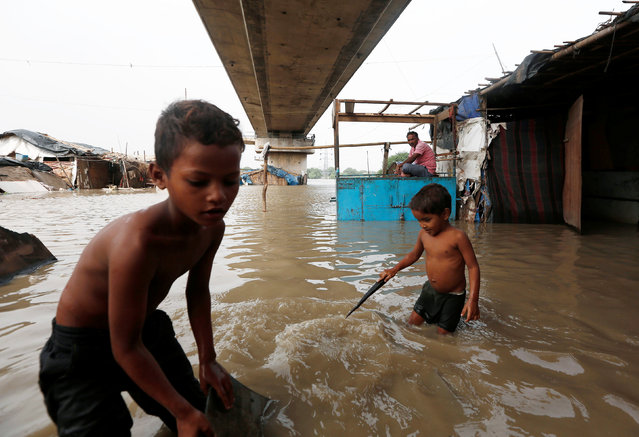 Children wade through flood waters as a man sits outside his submerged shanty at a slum area after a rise in the waters of the river Yamuna in New Delhi, July 31, 2018. (Photo by Adnan Abidi/Reuters) 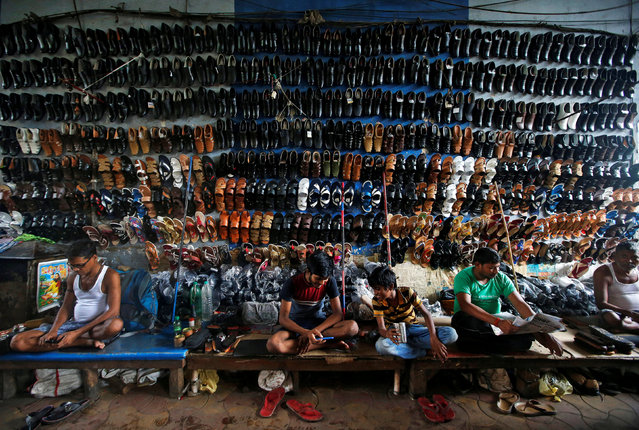 Vendors wait for customers at a roadside shoe stall under a flyover in Kolkata, India, August 7, 2018. (Photo by Rupak De Chowdhuri/Reuters) 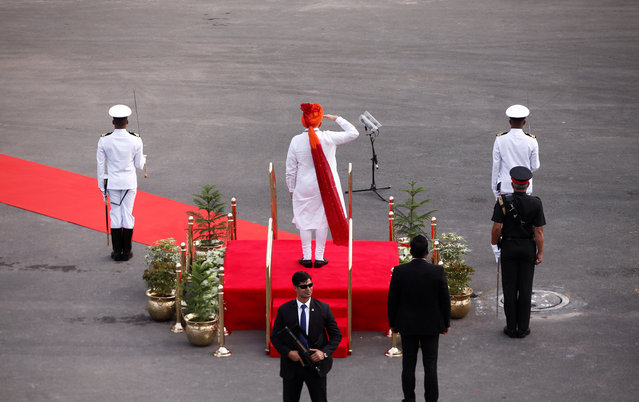 Prime Minister Narendra Modi salutes as he prepares to inspect the honour guard during Independence Day celebrations at the historic Red Fort in Delhi, August 15, 2018. (Photo by Adnan Abidi/Reuters) 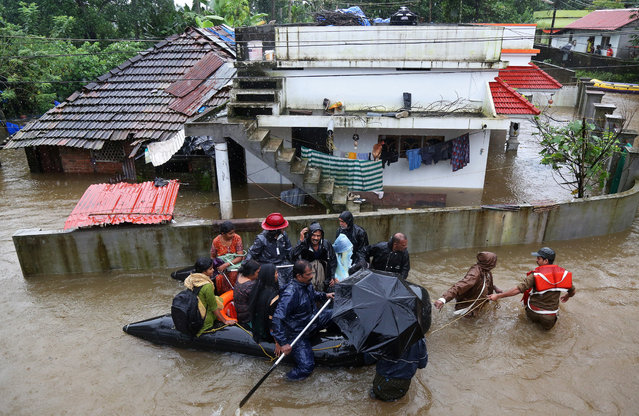 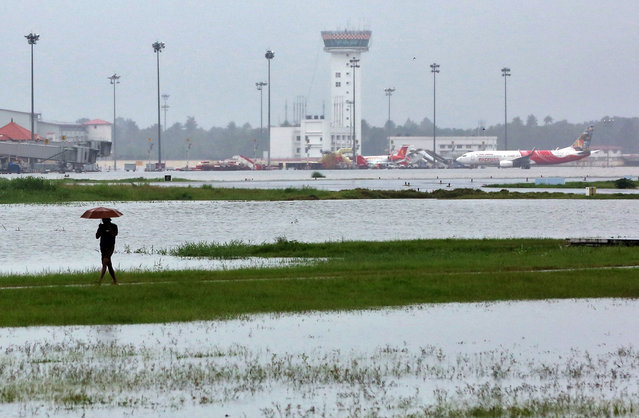 A man walks inside the flooded Cochin international airport after the opening of Idamalayar, Cheruthoni and Mullaperiyar dam shutters following heavy rain, on the outskirts of Kochi, India, August 15, 2018. (Photo by Sivaram V/Reuters) 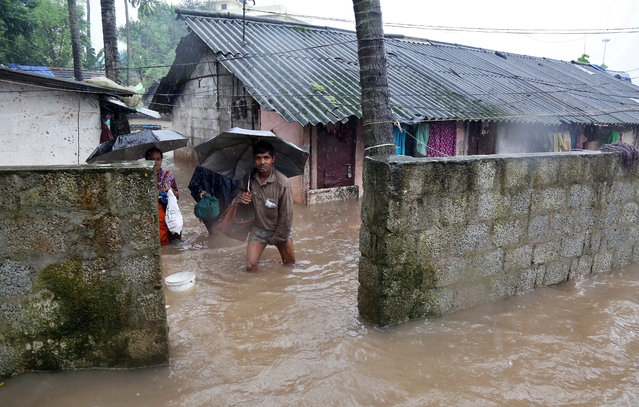 Residents affected by flooding move to safer places after the opening of Idamalayar, Cheruthoni and Mullaperiyar dam shutters following heavy rains, on the outskirts of Kochi, India August 15, 2018. (Photo by Sivaram V/Reuters) 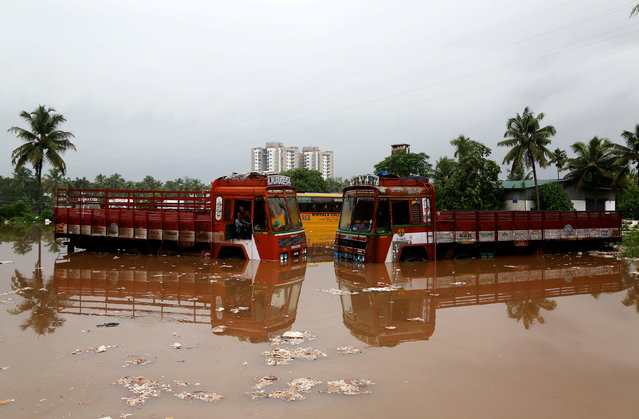 Partially submerged trucks are seen surrounded by floodwaters at a parking bay after the opening of Idamalayr, Cheruthoni and Mullaperiyar dam shutters following heavy rains, on the outskirts of Kochi, August 16, 2018. (Photo by Sivaram V/Reuters) 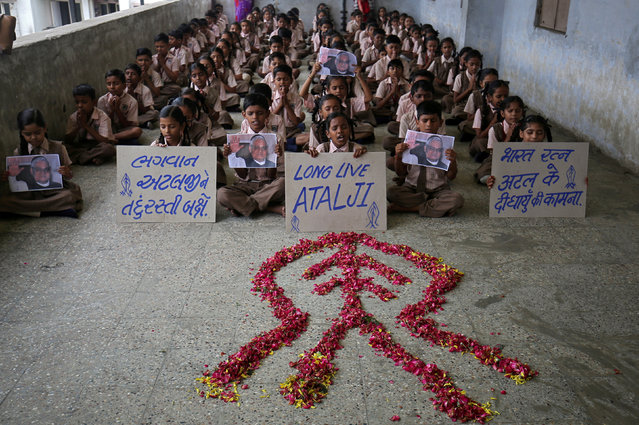 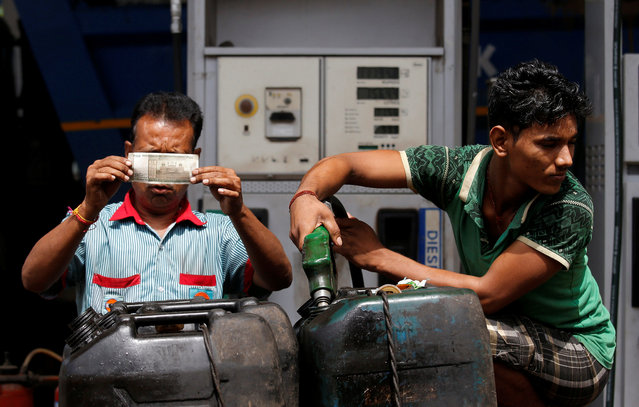 A worker checks a 500 Indian rupee note as a man fills diesel in containers at a fuel station in Kolkata, August 14, 2018. (Photo by Rupak De Chowdhuri/Reuters) 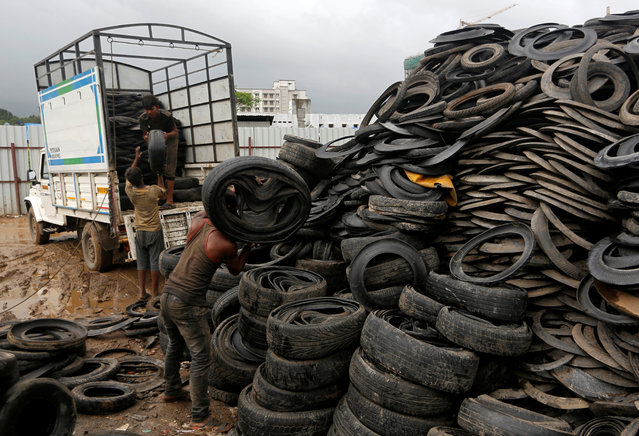 Men unload worn-out rubber tyres from a vehicle at a scrap yard on the outskirts of Mumbai, August 13, 2018. (Photo by Francis Mascarenhas/Reuters) 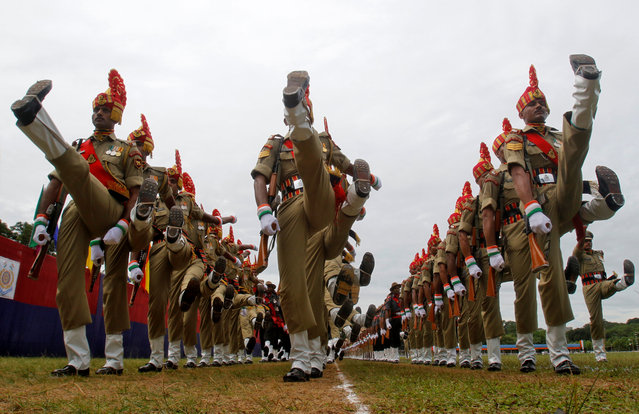 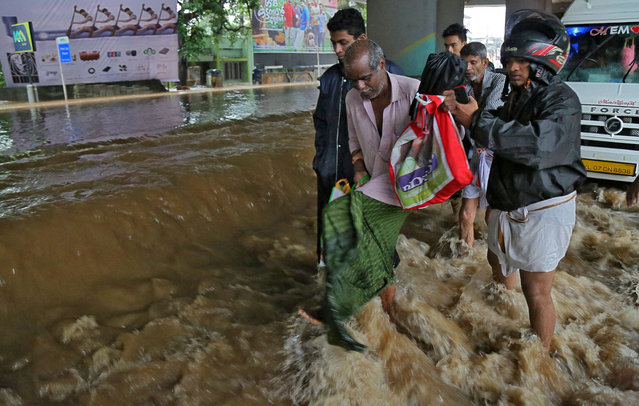 Rescue workers help people to cross a flooded road after the opening of Idamalayr, Cheruthoni and Mullaperiyar dam shutters following heavy rains, on the outskirts of Kochi, India, August 16, 2018. (Photo by Sivaram V/Reuters) 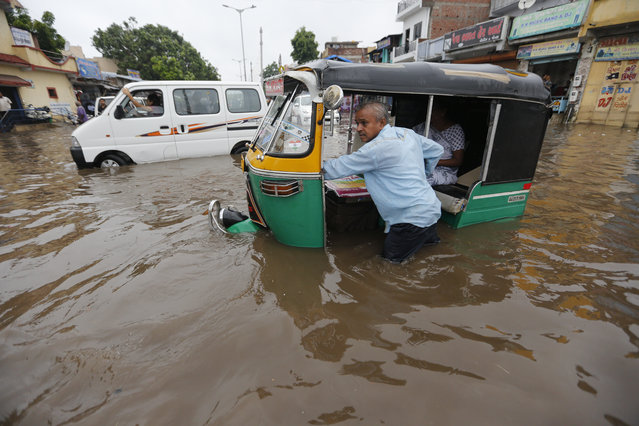 An Indian man pushes an autorickshaw past a flooded street after heavy rainfall in Ahmadabad, India, Friday, August 17, 2018. India receives its annual rainfall from June-October. (Photo by Ajit Solanki/AP Photo) 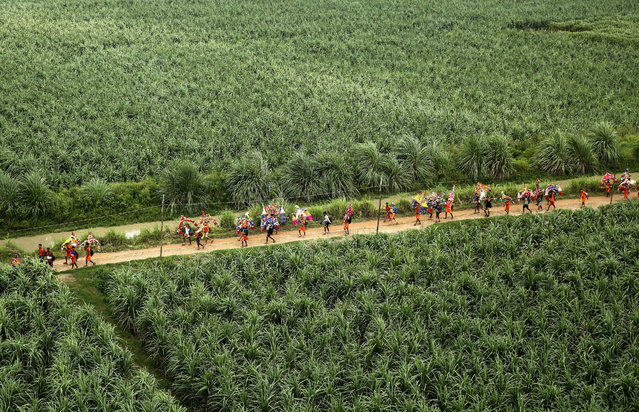 In this Wednesday, August 8, 2018, file photo, Kanwarias, worshipper of Hindu God Shiva, walk past sugarcane fields in a religious pilgrimage near Meerut, 60 kilometers (37.5 miles) from New Delhi, India. Kanwarias are devotees performing a ritual pilgrimage in which they walk the roads of India, clad in saffron, and carrying ornately decorated canisters of the sacred water of the Ganges River over their shoulders, to take it back to Hindu temples in their hometowns, during the Hindu lunar month of Shravana. (Photo by Rajesh Kumar Singh/AP Photo) 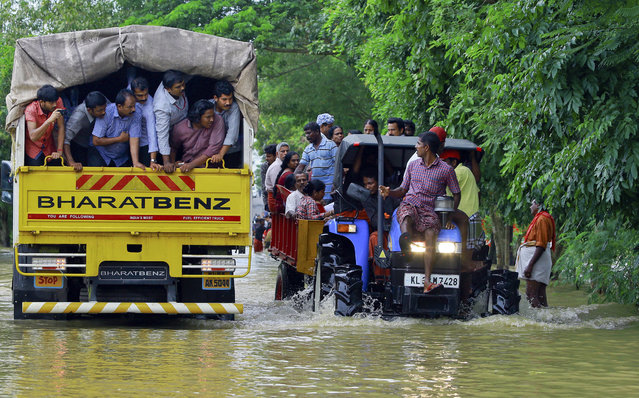 Flood affected people are rescued in a tractor, right as volunteers go for rescue work in a truck, left, at Kainakary in Alappuzha district, Kerala state, India, Friday, August 17, 2018. Rescuers used helicopters and boats on Friday to evacuate thousands of people stranded on their rooftops following unprecedented flooding in the southern Indian state of Kerala that killed more than 320 people in the past nine days, officials said. (Photo by Tibin Augustine/AP Photo) 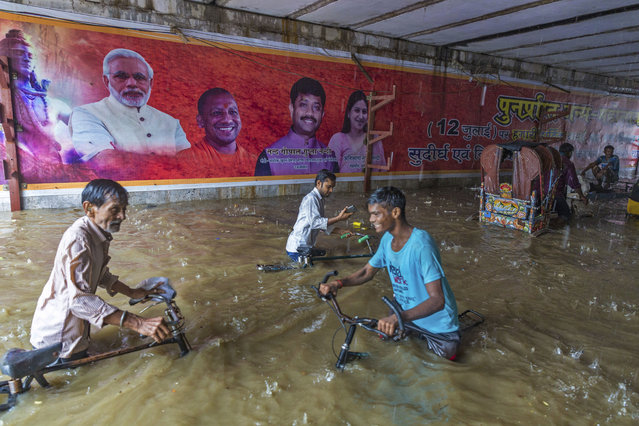 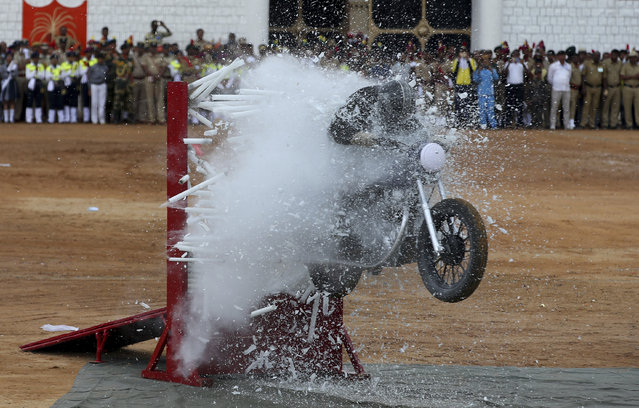 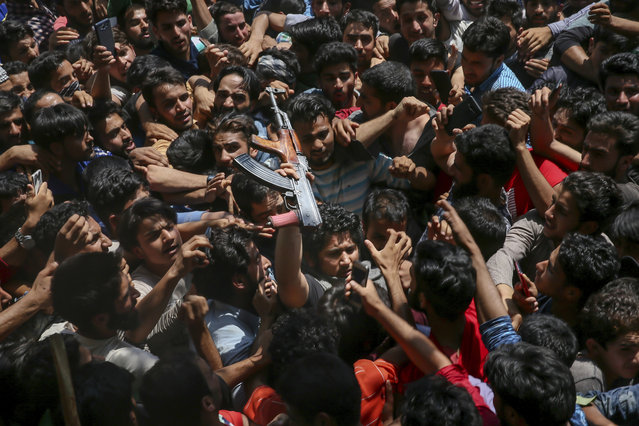 Kashmiri villagers stretch out their hands to touch a Pakistani rebel, as a mark of respect, as he arrives at a funeral to pay tributes to slain rebels Umar Malik and Wakar Sheikh in Malikgund village, south of Srinagar, Indian controlled Kashmir, August 4, 2018. At least seven rebels and an Indian army soldier were killed in gunbattles in disputed Kashmir, triggering violent protests by residents opposed to Indian rule, officials said Saturday. (Photo by Dar Yasin/AP Photo) 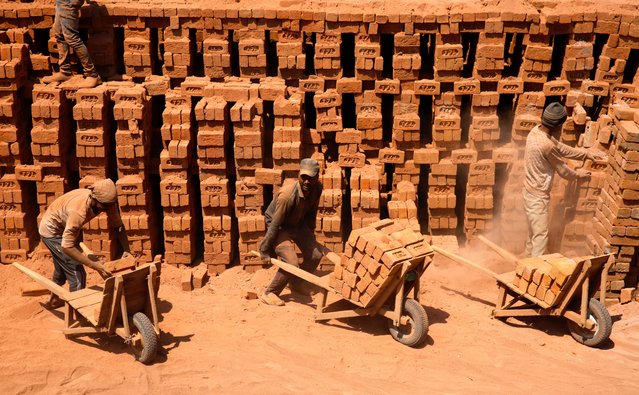 Non-Kashmiri laborers load bricks in handcarts inside a brick kiln in central Kashmir's Budgam district, some 25 kilometers from Srinagar, the summer capital of Indian Kashmir, 31 July 2018. The sector employes nearly 100,000 laborers, mostly non-Kashmiris from mainland India, to work in the kilns. (Photo by Farooq Khan/EPA/EFE) 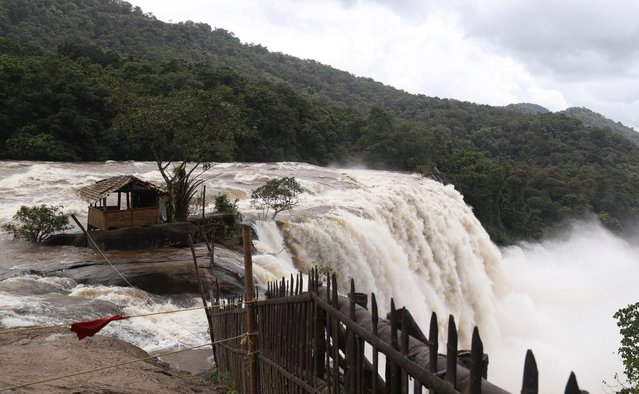 Athirampally Falls seen at Athirampally Panchayat, Chalakudy Taluk, Thrissur District of Kerala, India, 13 August 2018. According to reports, the region is on a high alert with schools and offices been closed due to the rising water levels of Periyar river after the gates of the Idukki reservoir were opened. (Photo by Prakash Elamakkara/EPA/EFE) 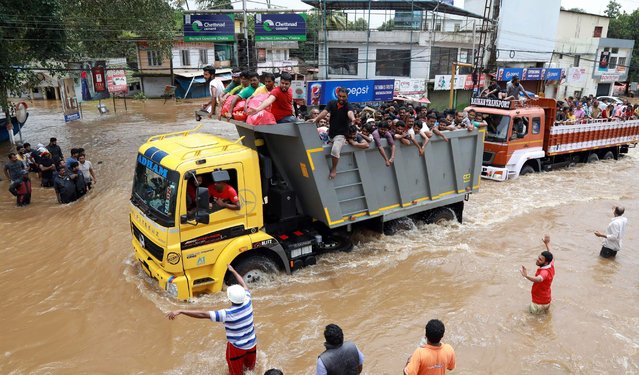 Indian passengers travel in a truck to a safer place as flood waters ravaged the National Highway 47 in Ernakulam district of Kochi, in the Indian state of Kerala, on August 17, 2018. Troop reinforcements stepped up desperate rescue attempts in India' s flood- stricken Kerala state on August 17 after more than 100 bodies were found in a day and a half, taking the crisis death toll to at least 164. (Photo by AFP Photo/Stringer)
Edit Del
20 Aug 2018 00:03:00, post received 0 comments
Publication archive:
←   →
Popular tags:
All tags
Last searches: