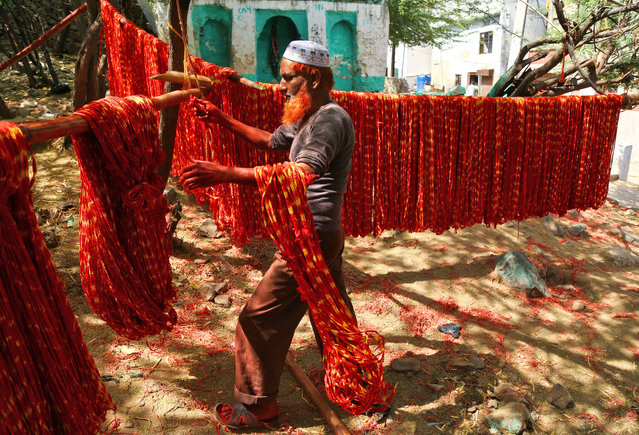 A worker hangs “Kalavas” or sacred threads to dry after dyeing them with colours in Ajmer, India, March 17, 2017. (Photo by Himanshu Sharma/Reuters) 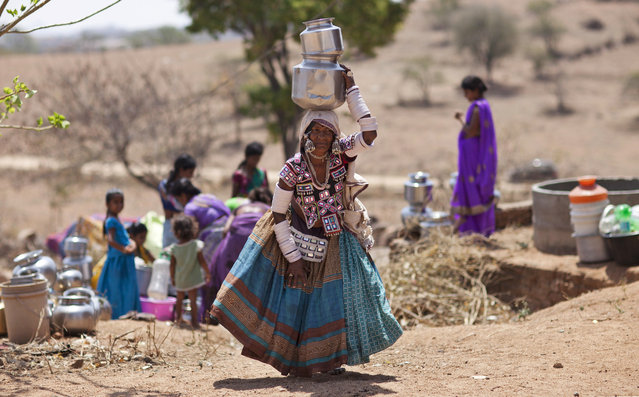 An indigenous Indian woman in her traditional attire walks after collecting water from public tap on the eve of World Water Day, outskirts of Hyderabad, India, Tuesday, March 21, 2017. There is no direct supply of potable water at homes in most of the poor neighborhoods in the country and people have to depend on regulated supply of water from public taps erected on roadsides, with a single tap catering to hundreds of households. (Photo by Mahesh Kumar A./AP Photo) 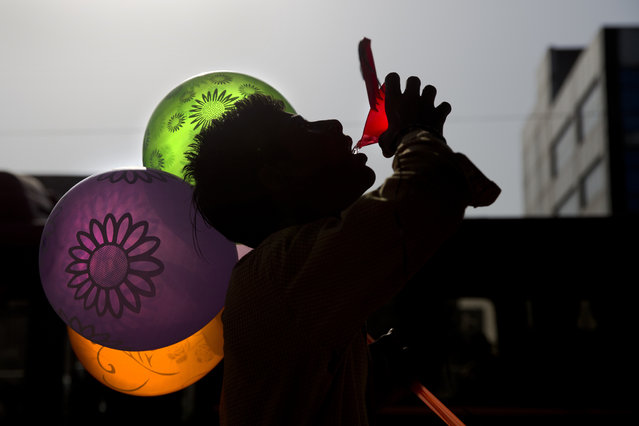 In this photo taken on Tuesday, March 21, 2017, an Indian street vendor drinks water from an earthen pot kept outside a taxi stand in New Delhi, India. Some Indians keep earthen pots filled with water outside their homes for thirsty passersby especially in summer months. (Photo by Tsering Topgyal/AP Photo) 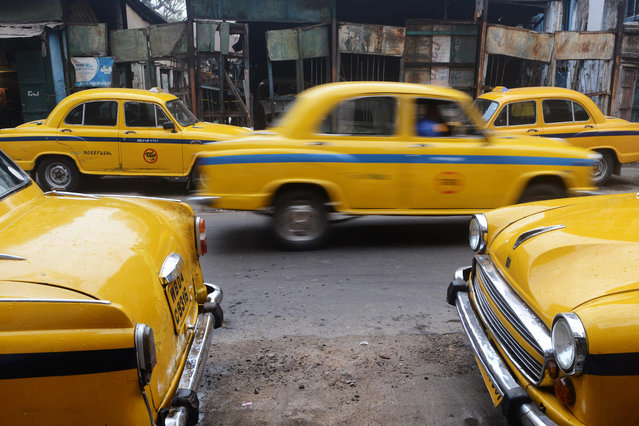 In this photograph taken on February 14, 2017, Indian Hindustan Motors Ambassador taxis stand parked on a street in Kolkata India' s Hindustan Motors has sold its Ambassador car to France' s Peugeot for just USD12 million, capping a spectacular downfall for a vehicle once emblematic of the country' s political class. The CK Birla group, the owners of Hindustan Motors, have sold the car brand for 800 million rupees to the French auto makers, a company spokesman confirmed to AFP. Hindustan Motors, India' s oldest car maker, stopped production of the Ambassador in 2014 citing debt and lack of demand for the vehicle which was designed on Britain' s long- defunct Morris Oxford. (Photo by Dibyangshu Sarkar/AFP Photo) 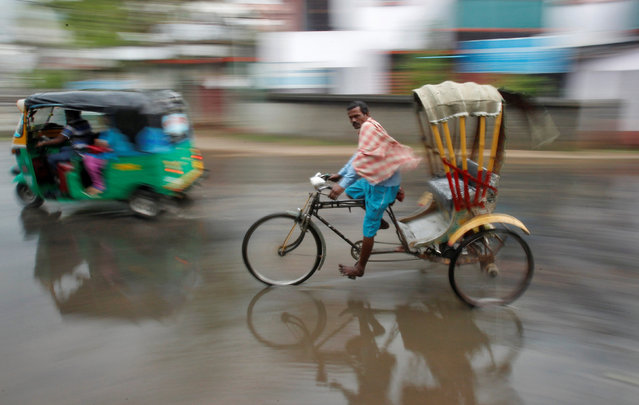 A man pedals his cycle rickshaw during rains in Agartala, India, March 18, 2017. (Photo by Jayanta Dey/Reuters) 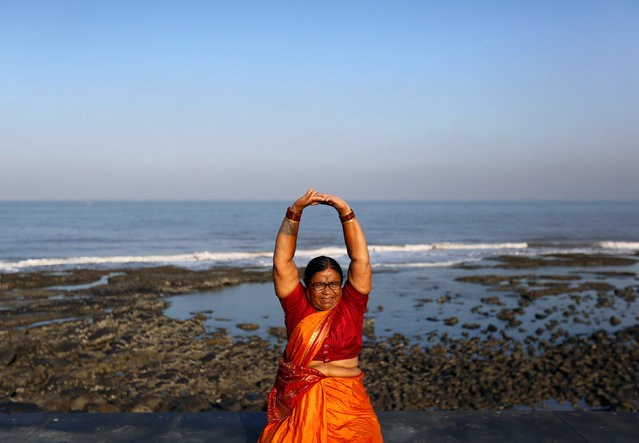 Wearing a saree, traditional women's cloth, a woman exercises on a promenade along the Arabian Sea in Mumbai, India, March 20, 2017. (Photo by Danish Siddiqui/Reuters) 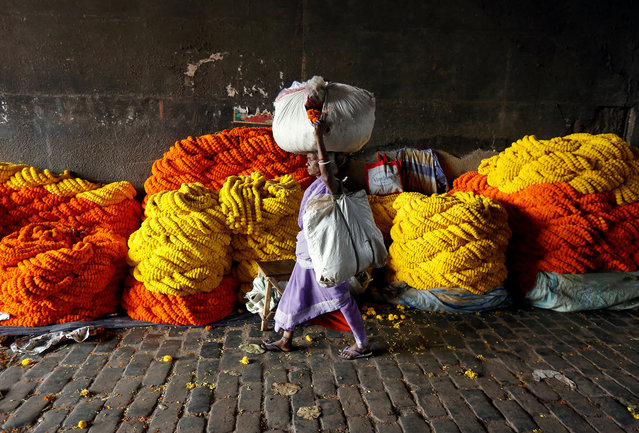 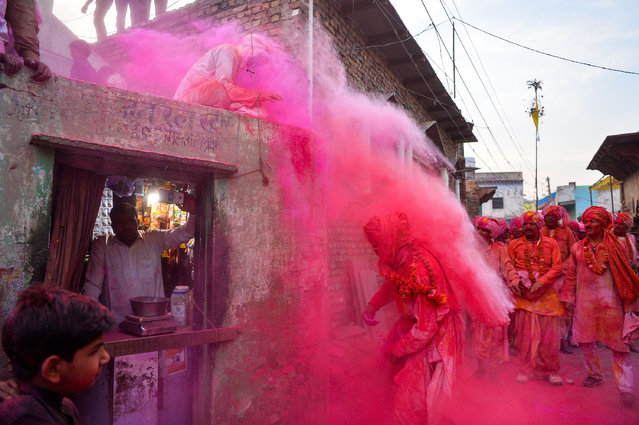 Indian villagers throw coloured powder over others during Lathmar Holi celebrations in the village of Jaab in Kosi Kalan, in Mathura district of Uttar Pradesh state, on March 14, 2017. Holi, also called the Festival of Colours, is a popular Hindu spring festival observed in India at the end of the winter season on the last full moon day of the lunar month. (Photo by Chandan Khanna/AFP Photo) 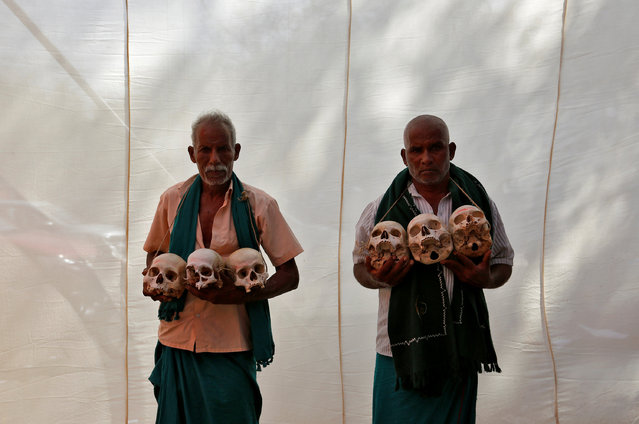 Farmers from the southern state of Tamil Nadu display skulls, who they claim are the remains of Tamil farmers who have committed suicide, during a protest demanding a drought-relief package from the federal government, in New Delhi, India March 22, 2017. (Photo by Cathal McNaughton/Reuters) 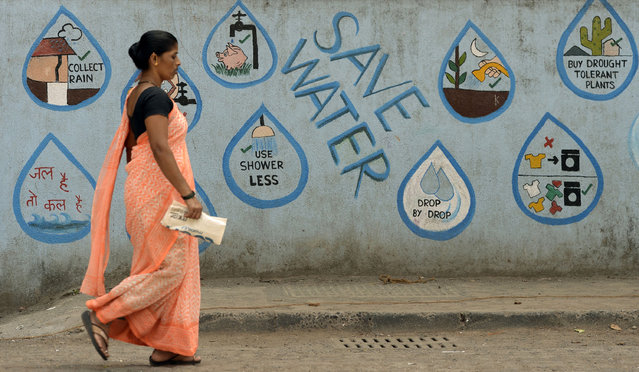 An Indian pedestrian walks past a wall adorned with water conservation messages in Mumbai on March 22, 2017, on World Water Day. Recycling the world's wastewater, almost all of which goes untreated, would ease global water shortages while protecting the environment, the United Nations said in a major report. (Photo by Punit Paranjpe/AFP Photo) 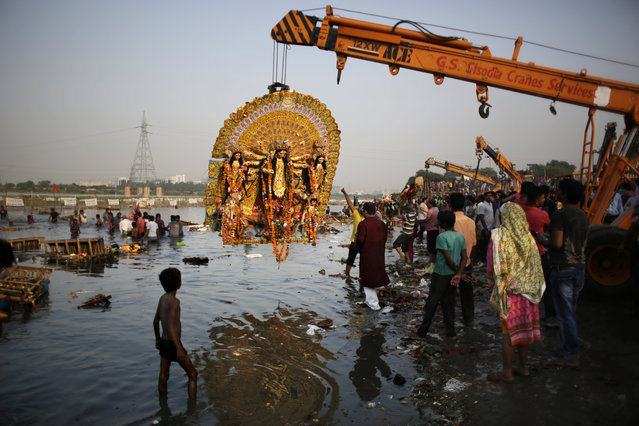 In this Tuesday, October 11, 2016 file photo, a giant Idol of Hindu goddess Durga suspends from a crane before it is immersed in the River Yamuna during Durga Puja festival in New Delhi, India. A court in northern India has granted the same legal rights as a human to the Ganges and Yamuna rivers, considered sacred by nearly a billion Indians. The Uttaranchal High Court in Uttarakhand state ruled Monday, March 20, 2017, that the two rivers be accorded the status of living human entities, meaning that if anyone harms or pollutes the rivers, the law would view it as no different from harming a person. (Photo by Altaf Qadri/AP Photo) 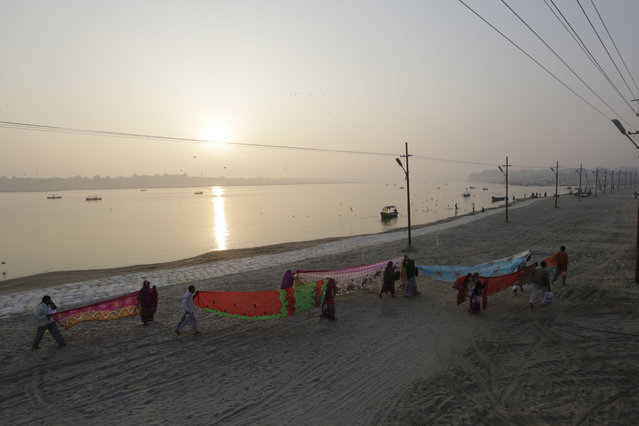 In this Thursday, January 5, 2017, file photo, Hindu devotees dry their clothes after taking a dip at Sangam, the confluence of rivers Ganges, Yamuna, and mythical Saraswati in Allahabad, India. (Photo by Rajesh Kumar Singh/AP Photo) 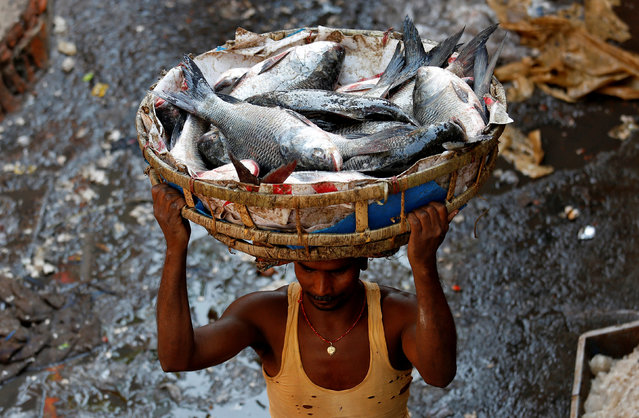 A worker carries a basket of fish, at a wholesale fish market, on the outskirts of Kolkata, March 15, 2017. (Photo by Rupak De Chowdhuri/Reuters) 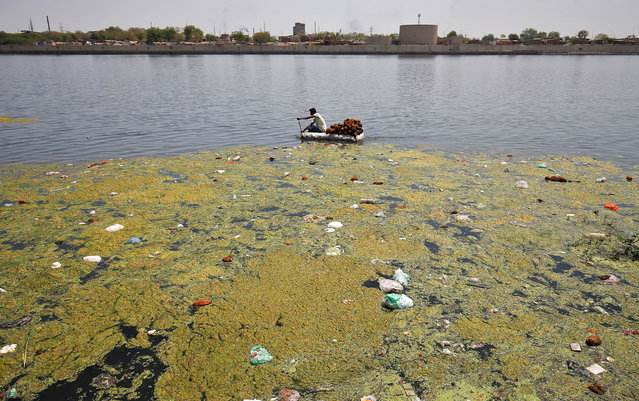 A man collects coconuts thrown as offerings by worshippers on the weed covered Sabarmati river, ahead of World Water Day, in Ahmedabad, March 21, 2017. (Photo by Amit Dave/Reuters) Boys carry containers filled with water from a communal tap at a slum in Mumbai, March 22, 2017. (Photo by Danish Siddiqui/Reuters) 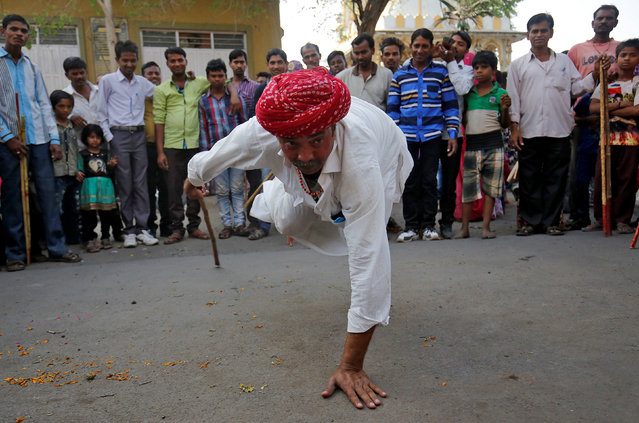 A man performs a stunt with a bamboo stick as part of Holi celebrations locally known as “Gare” festival outside a temple in Ahmedabad, March 19, 2017. (Photo by Amit Dave/Reuters) 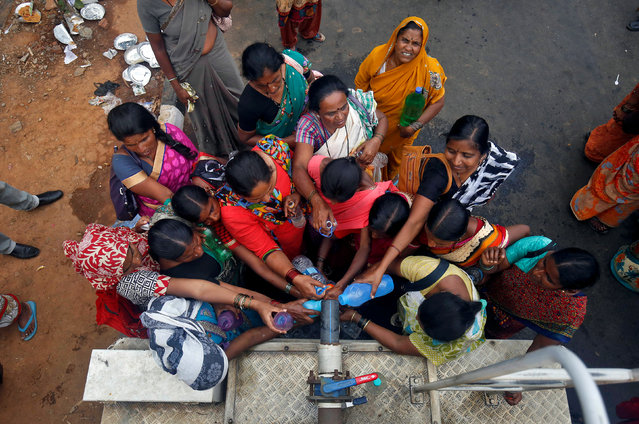 People fill bottles with water from a municipal truck ahead of World Water Day, in Bengaluru, March 21, 2017. (Photo by Abhishek N. Chinnappa/Reuters) 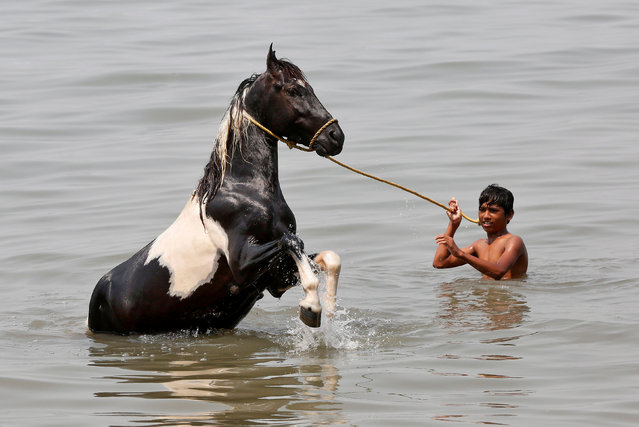 A boy bathes his horse in the waters of the Arabian Sea in Mumbai, March 15, 2017. (Photo by Shailesh Andrade/Reuters) 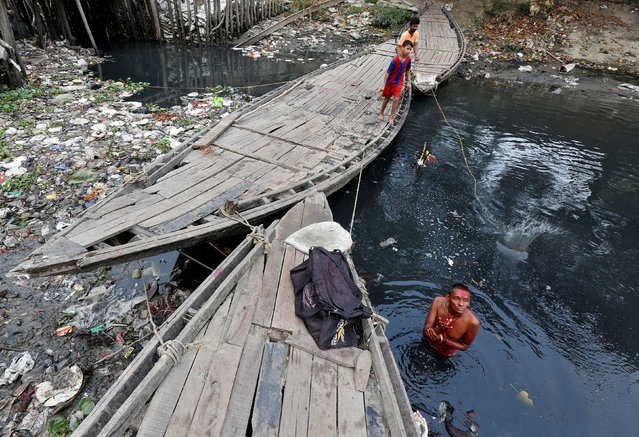 A man offers a prayer as he takes a dip in the polluted waters of Tolly's Nullah in Kolkata, March 22, 2017. (Photo by Rupak De Chowdhuri/Reuters) 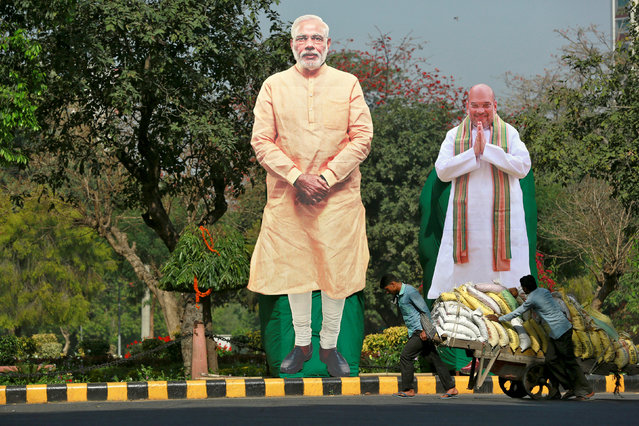 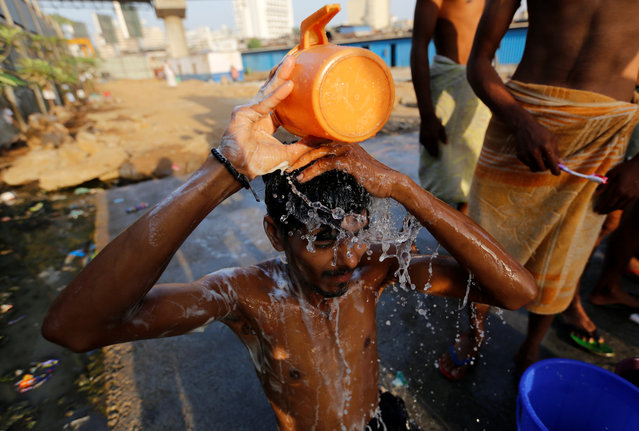 A labourer takes a bath at a communal tap in Mumbai, March 22, 2017. (Photo by Danish Siddiqui/Reuters) 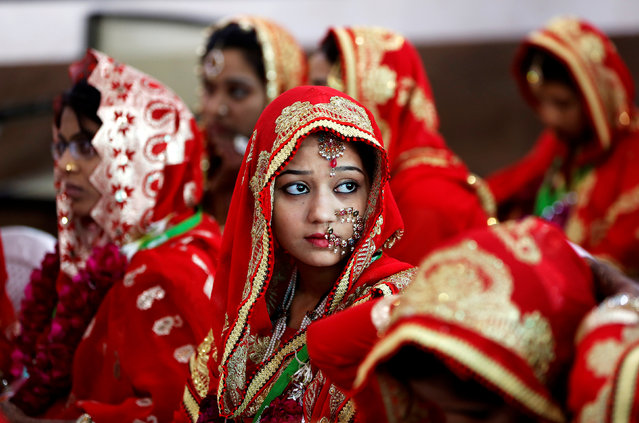 Brides sit and wait for their turn during a Muslim mass wedding in Ahmedabad, March 12, 2017. (Photo by Amit Dave/Reuters) 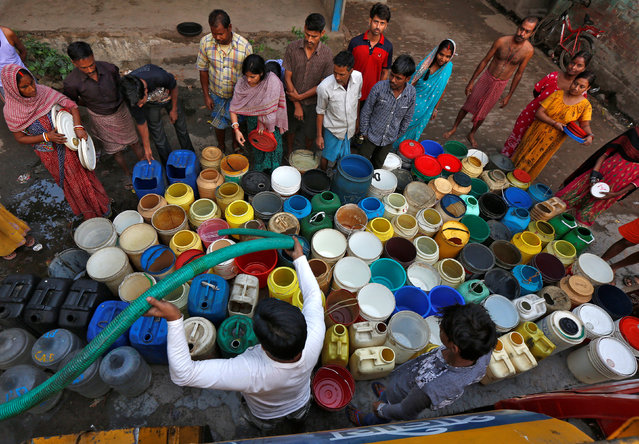 Residents wait as they get their containers filled with drinking water from a municipal tanker at a slum in Kolkata, March 22, 2017. (Photo by Rupak De Chowdhuri/Reuters) 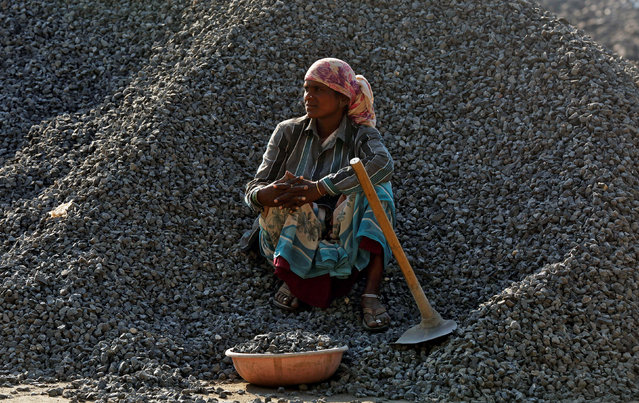