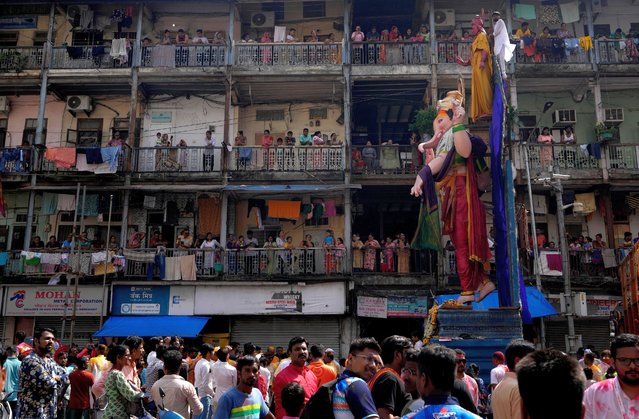 People watch a procession leading an idol of elephant-headed Hindu god Ganesha for immersion during the ten-day long Ganesh Chaturthi festival in Mumbai, India, Friday, September 9, 2022. The festival is a celebration of the birth of Ganesha, the Hindu god of wisdom, prosperity and good fortune. (Photo by Rajanish Kakade/AP Photo) 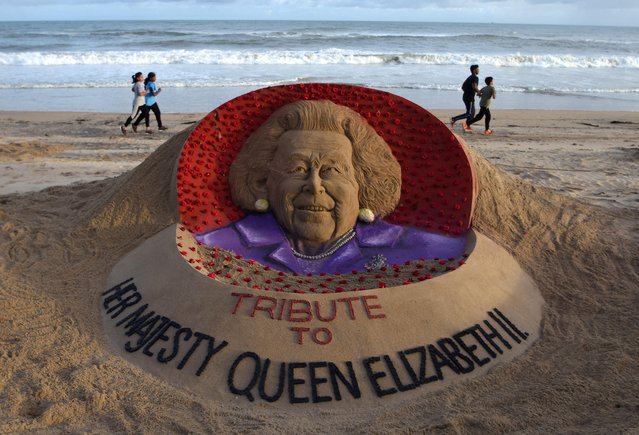 Children run past a sand sculpture depicting Britain's Queen Elizabeth, created by Indian sand artist Sudarsan Pattnaik and his students on a beach in Puri, Odisha, India on September 9, 2022. (Photo by Reuters/Stringer) 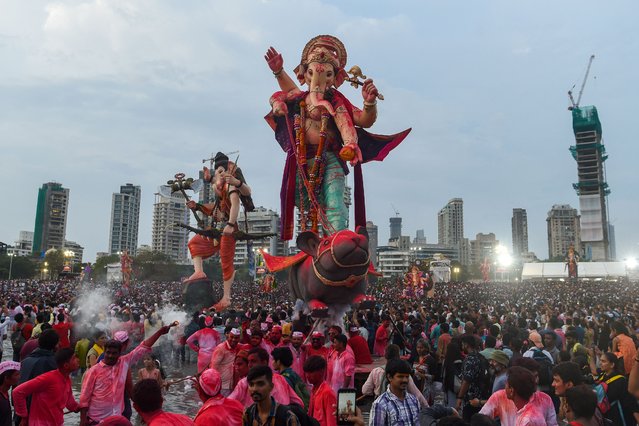 Devotees carry idols of the elephant-headed Hindu deity Ganesha during an immersion procession to the Arabian sea on the last day of Ganesh Chaturthi festival, in Mumbai on September 9, 2022. (Photo by Punit Paranjpe/AFP Photo) 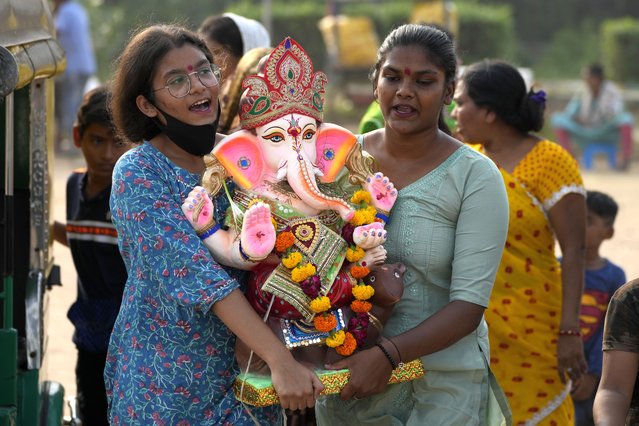 Devotees carry an idol of the elephant-headed Hindu god Ganesh to immerse it in an artificial pond on the final day of the ten-day long Ganesh Chaturthi festival in Ahmedabad, India, Friday, September 9, 2022. The festival is a celebration of the birth of Ganesha, the Hindu god of wisdom, prosperity and good fortune. (Photo by Ajit Solanki/AP Photo) 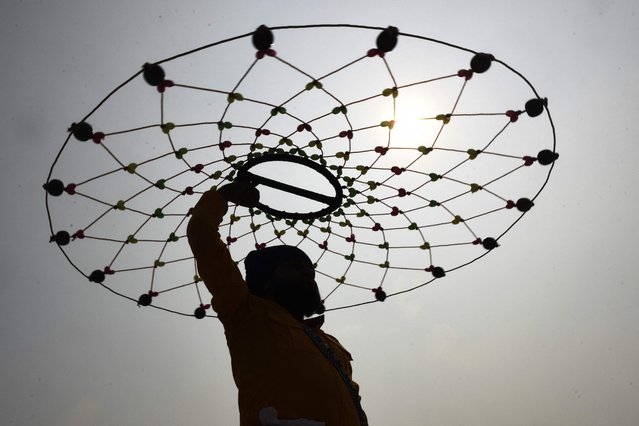 A member of National Cadet Corps (NCC) commemorates the 125th anniversary of Saragarhi Battle, at the Golden Temple in Amritsar on September 10, 2022. (Photo by Narinder Nanu/AFP Photo) 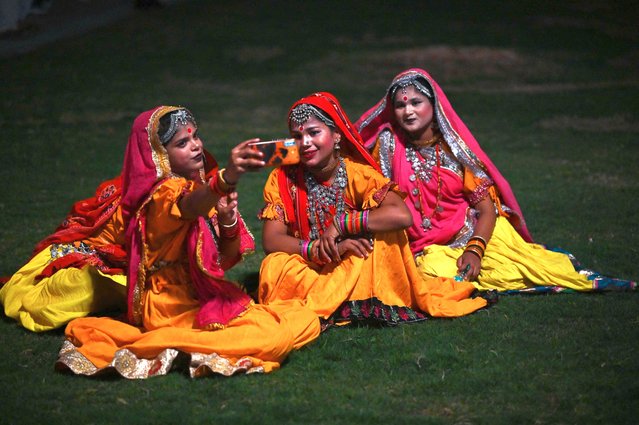 Performers in traditional attire take a selfie at the lawns after the recent inauguration of the newly renovated avenue ‘Central Vista’ in New Delhi on September 10, 2022. (Photo by Sajjad Hussain/AFP Photo) 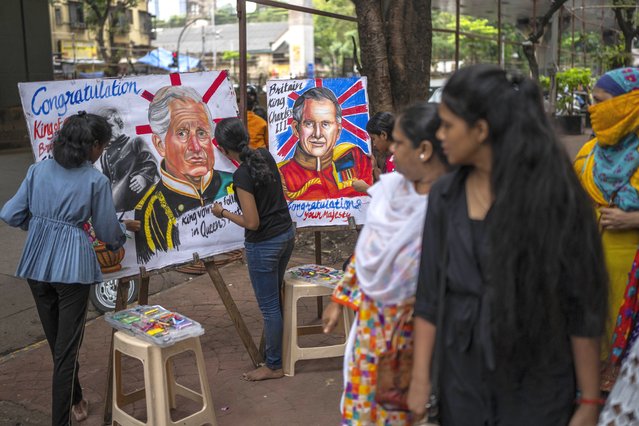 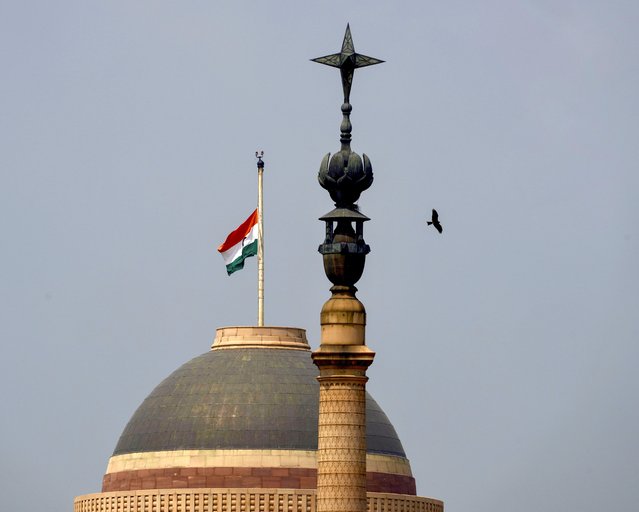 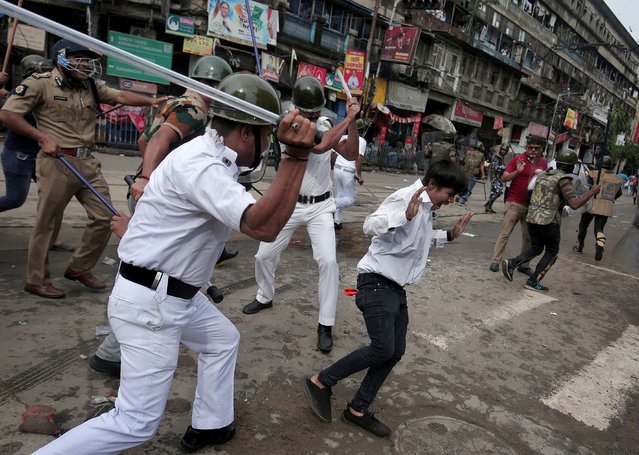 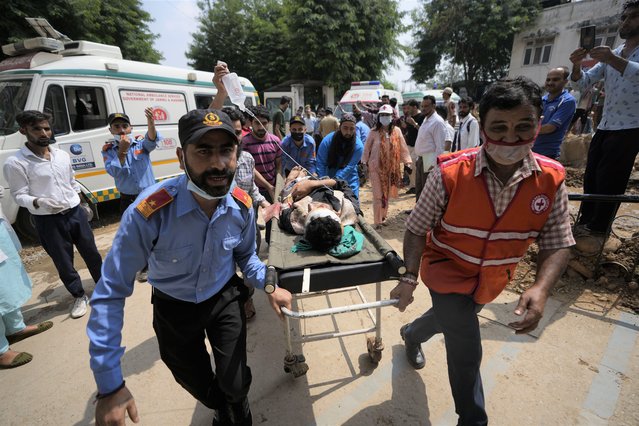 A passenger injured in a bus accident in Jammu and Kashmir's Poonch district is brought for treatment at a hospital in Jammu, India, Wednesday, September 14, 2022. Nearly a dozen people died and more people were injured when a mini-bus plunged into a deep gorge Wednesday. (Photo by Channi Anand/AP Photo) 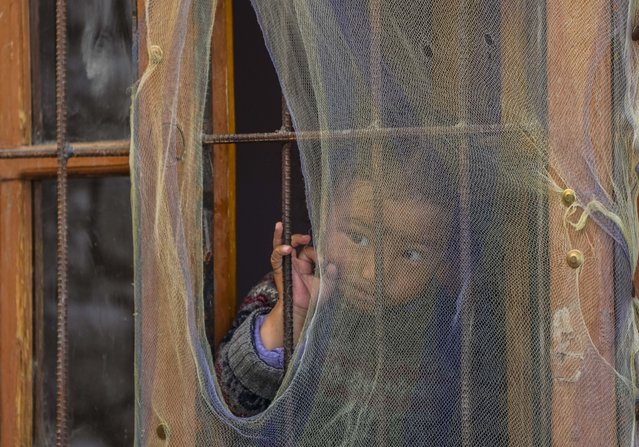 A Ladakhi child looks out a widow on the outskirts of Leh, Ladakh, India, Thursday, September 15, 2022. (Photo by Mukhtar Khan/AP Photo) 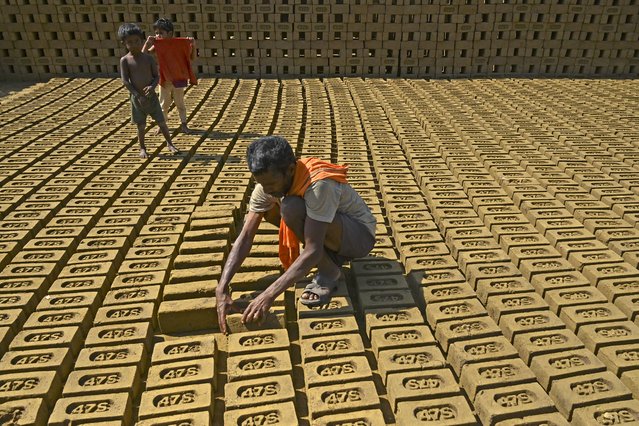 A labourer works at a brick kiln on the outskirts of Srinagar on September 15, 2022. (Photo by Tauseef Mustafa/AFP Photo) 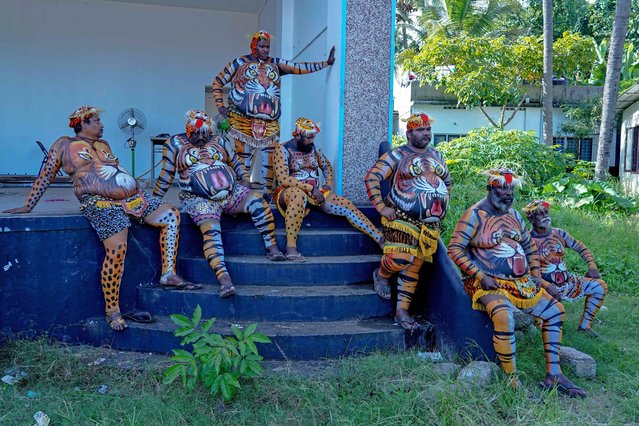 Tiger dancers gesture as they wait to perform during the last day of Onam celebrations in Kochi on September 15, 2022. (Photo by Arun Chandrabose/AFP Photo) 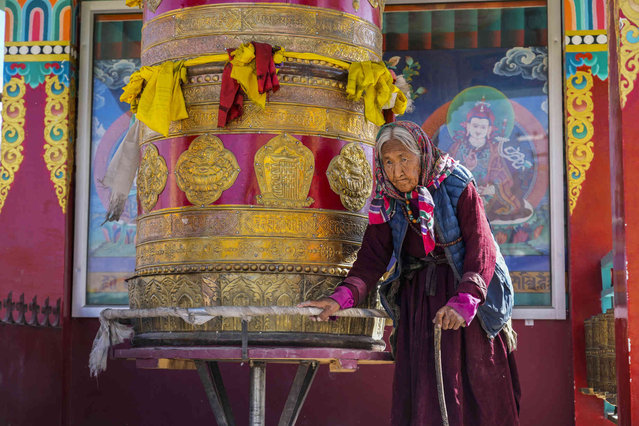 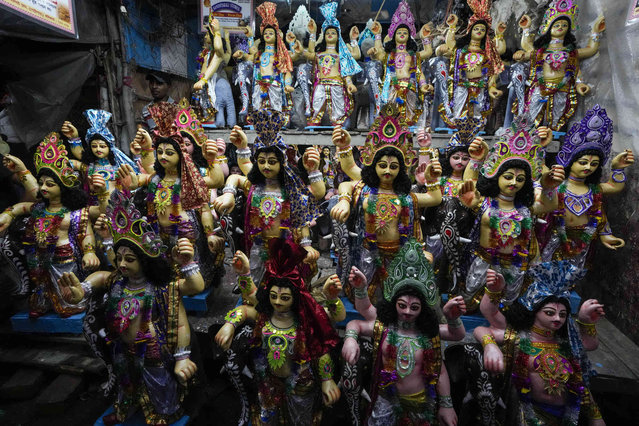 Clay idols of Viswakarma are displayed by a road on the eve of Vishwakarma Puja, dedicated to the worship of the Hindu god of craftsmen and artisans, in Kolkata, India, Friday, September 16, 2022. (Photo by Bikas Das/AP Photo) 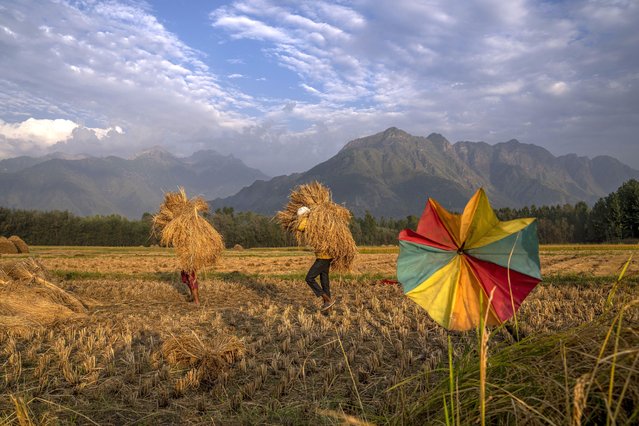 People carry harvested paddy in a rice field on the outskirts of Srinagar, Indian controlled Kashmir, Friday, September 16, 2022. Agriculture is the main source of food, income, and employment in rural areas. (Photo by Dar Yasin/AP Photo) 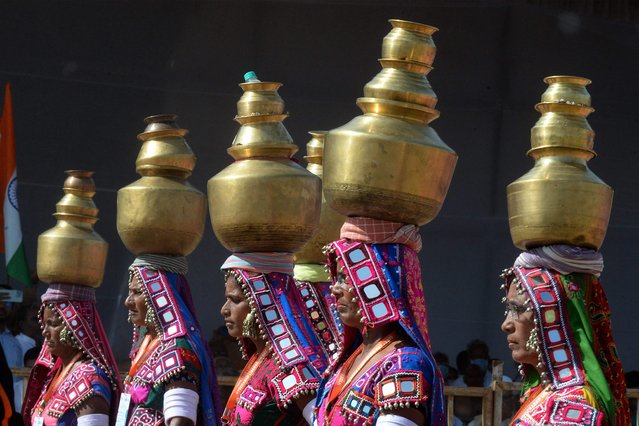 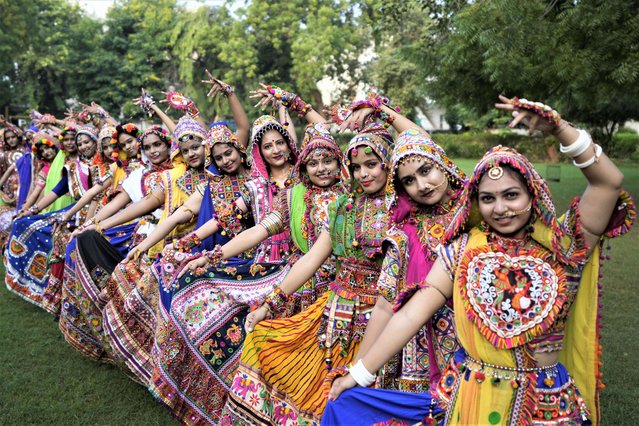 Indian women wearing traditional attire, pose for photographs as they practice Garba, the traditional dance of Gujarat state, ahead of Navratri festival in Ahmedabad, India, Sunday, September 18, 2022. The Hindu festival of Navratri or nine nights will begin from September 26. (Photo by Ajit Solanki/AP Photo) 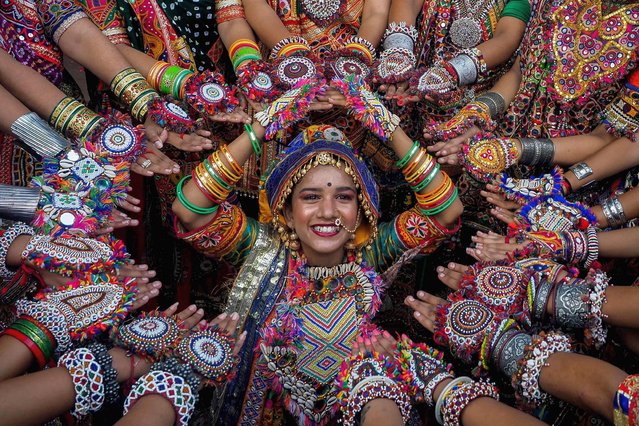 Participants from an art group wearing traditional dresses rehearse Garba dance ahead of the Navratri festival in Ahmedabad on September 20, 2022. (Photo by Sam Panthaky/AFP) 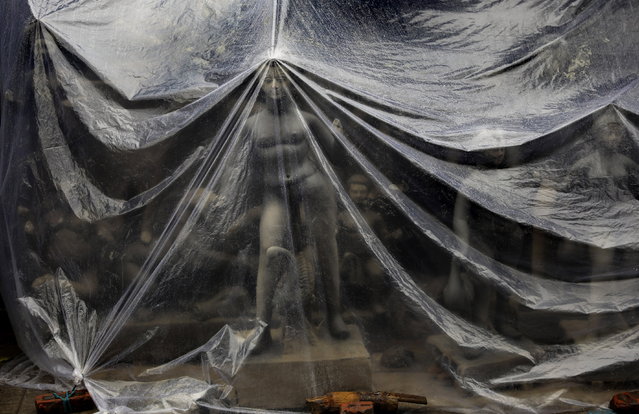 An unfinished idol of Goddess Durga is protected from the rain at Kumartuli district ahead of the Durga Puja festival in Kolkata, India, 20 September 2022. Bengalis all over the world will be marking the festival representing the victory of good over evil and the celebration of female power from 01 to 05 October. (Photo by Piyal Adhikary/EPA/EFE)
Edit Del
23 Sep 2022 04:47:00, post received 0 comments
Publication archive:
←   →
Popular tags:
All tags
Last searches: