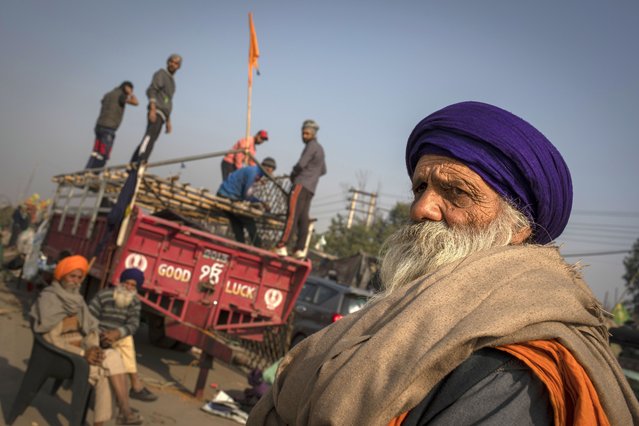 An elderly Sikh farmer looks on as others dismantle temporary structures used during protests in Singhu, on the outskirts of New Delhi, India, Saturday, December 11, 2021. Tens of thousands of jubilant Indian farmers on Saturday cleared protest sites on the capital's outskirts and began returning home, marking an end to their year-long demonstrations against agricultural reforms that were repealed by Prime Minister Narendra Modi's government in a rare retreat. (Photo by Altaf Qadri/AP Photo) 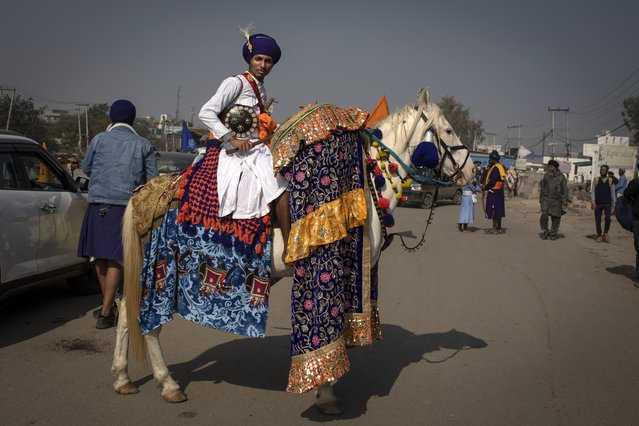 A Nihang or a Sikh warrior rides his decorated horse as farmers start vacating the protest site in Singhu, on the outskirts of New Delhi, India, Saturday, December 11, 2021. (Photo by Altaf Qadri/AP Photo) 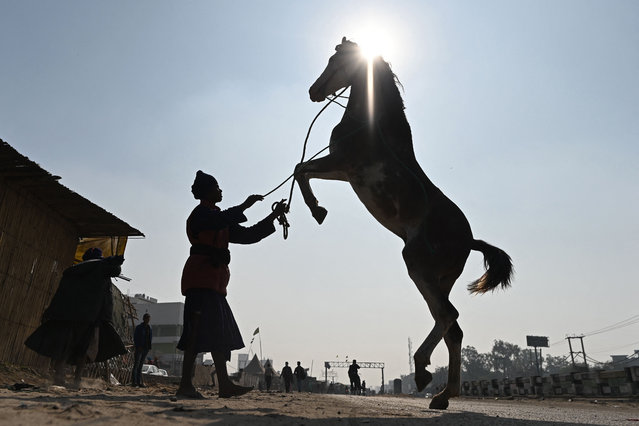 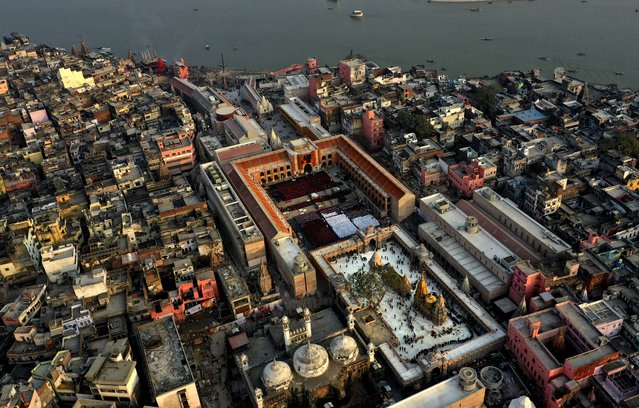 A bird's eye view of the newly constructed structures of Kashi Vishwanath Dham Corridor project is seen on the banks of the river Ganges in Varanasi, India, Sunday, December 12, 2021. Indian Prime Minister Narendra Modi is Monday scheduled to inaugurate the $115 million promenade that connects the sacred Ganges River with the centuries-old temple. (Photo by Rajesh Kumar Singh/AP Photo) 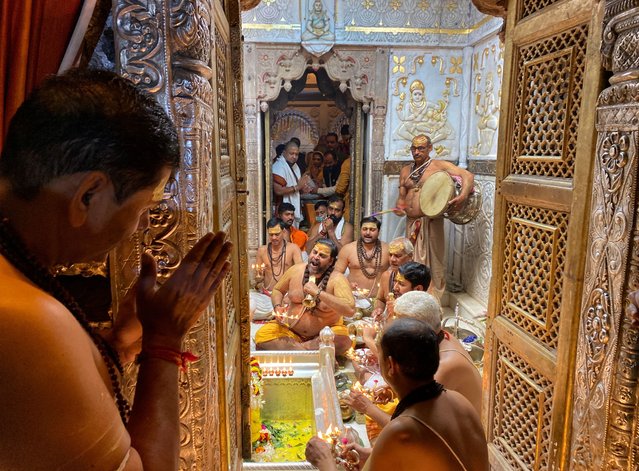 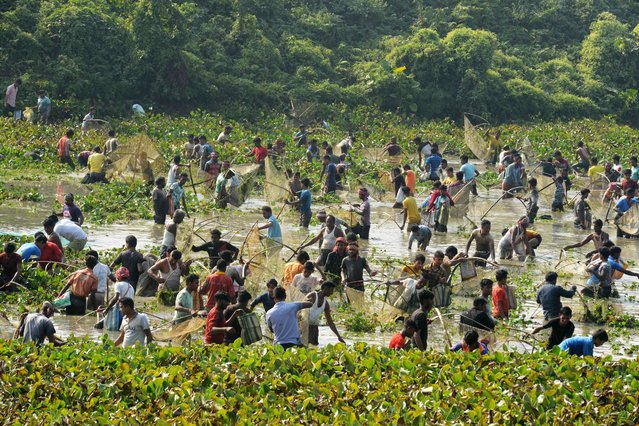 Villagers gather to fish in the waters after a barrage built on river Teesta was opened for maintainance at Fulbari village on the outskirts of Siliguri on December 13, 2021. (Photo by Diptendu Dutta/AFP Photo) 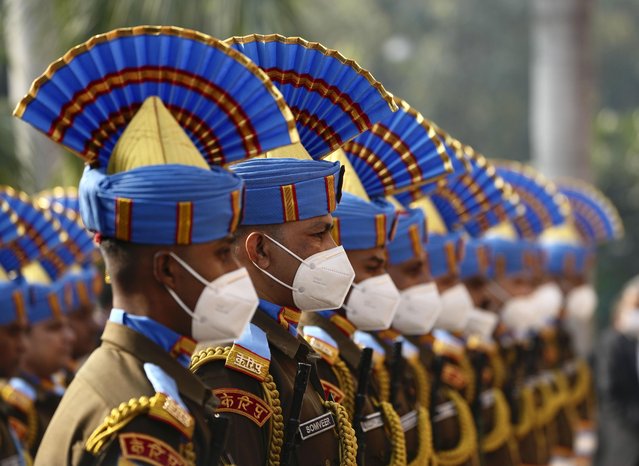 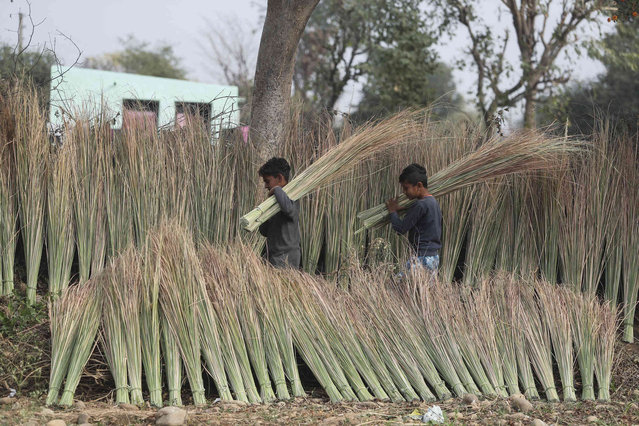 Indian boys carry newly made brooms for drying before selling them at a market on the outskirts of Jammu, India, Monday, December13, 2021. (Photo by Channi Anand/AP Photo) 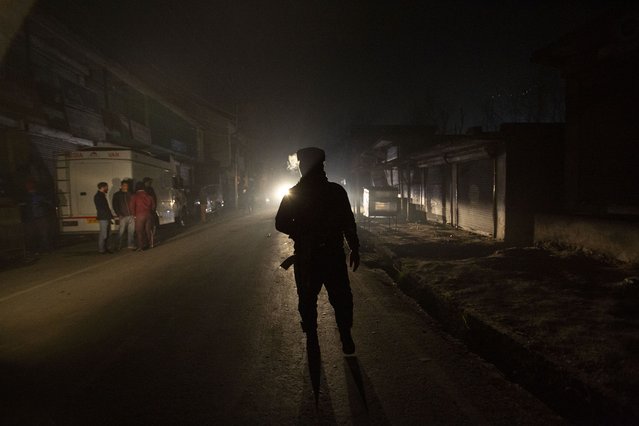 An Indian soldier guards near the site of an attack on the outskirts of Srinagar, Indian controlled Kashmir, Monday, December 13, 2021. Many policemen were injured in an attack which police blamed on rebels fighting against Indian rule. (Photo by Mukhtar Khan/AP Photo) 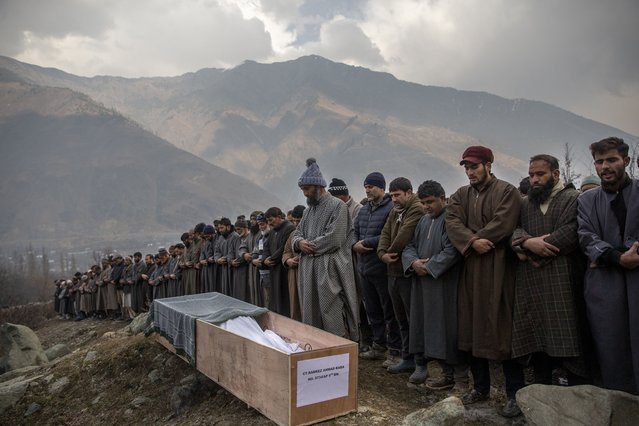 Relatives and neighbors pray by the body of Rameez Ahmad, a policeman who was killed in Monday's gun attack, during his funeral in Yachama, northeast of Srinagar, Indian controlled Kashmir, Tuesday, December 14, 2021. Ahmad and two other policemen were killed when gunmen sprayed with bullets a bus carrying police on the outskirts of Srinagar, the region’s main city, wounding fourteen officers. (Photo by Dar Yasin/AP Photo) 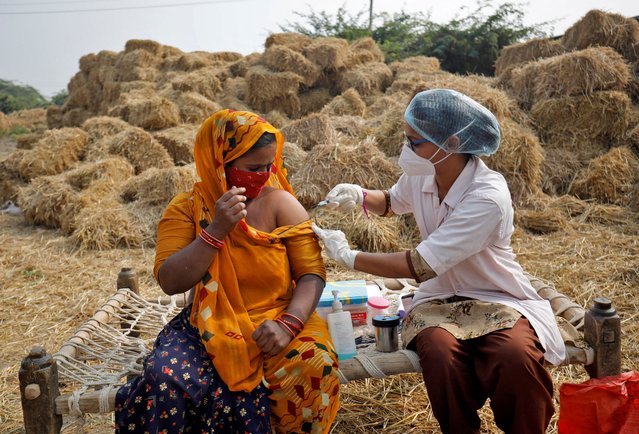 Jabuben Bharwad, 30, receives a dose of COVISHIELD vaccine against COVID-19, that's manufactured by Serum Institute of India, while working in a field during a door-to-door vaccination drive at Mahijada village on the outskirts of Ahmedabad, India, December 15, 2021. (Photo by Amit Dave/Reuters) 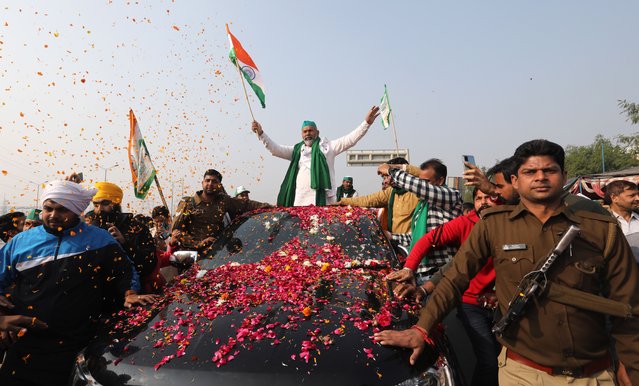 Bharatiya Kisan Union (BKU) leader Rakesh Tikait (C), along with other farmer leaders and supporters, participate in “Fateh march” or victory march as they vacate their protest site at the Delhi-Uttar Pradesh border, India, 15 December 2021. Indian farmers announced the end of their protests after the government decided to repeal the three Farm laws and accept the farmers’ other demands, bringing an end to one of the biggest protests that Indian Prime Minister Narendra Modi's government has had to face since taking office. (Photo by Rajat Gupta/EPA/EFE) 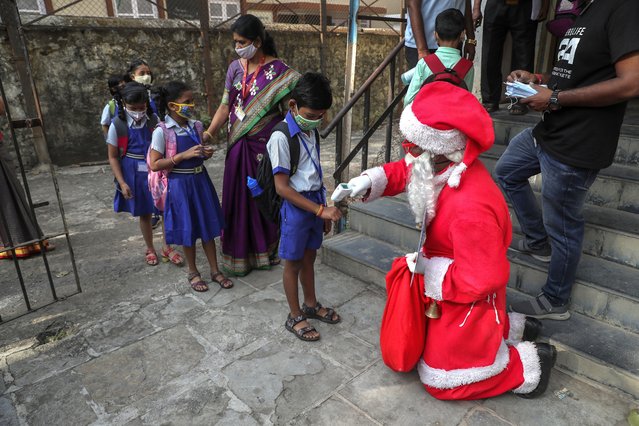 A man dress as Santa Claus checks the temperature of students as they arrive to attend classes at a school in Mumbai, India, Wednesday, December 15, 2021. After being closed for nearly-20-months due to the coronavirus pandemic, schools in Mumbai reopened for classes 1 to 7 Wednesday. (Photo by Rafiq Maqbool/AP Photo) 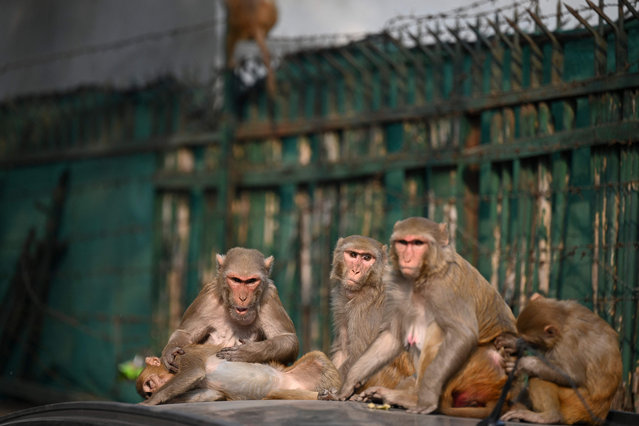 Monkeys sit on top of a car at a market area in New Delhi on December 14, 2021. (Photo by Sajjad Hussain/AFP Photo) 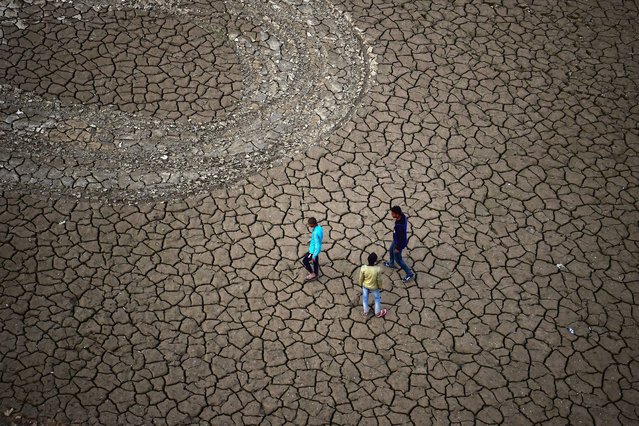 Youths walk along a dry river bed on the banks of the river Ganges, in Allahabad on December 16, 2021. (Photo by Sanjay Kanojia/AFP Photo) 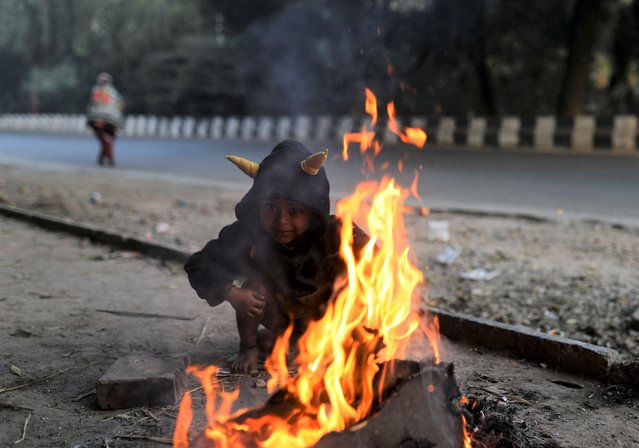 A child sits next to a campfire on a cold winter morning in New Delhi, India, December 17, 2021. (Photo by Anushree Fadnavis/Reuters) 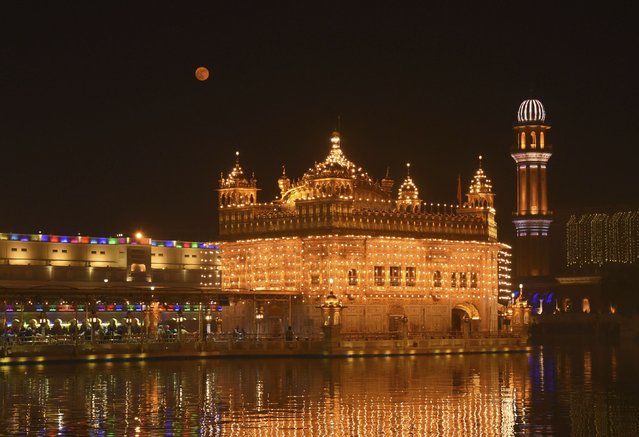 Illuminated Golden Temple is seen on the occasion of the birth anniversary of Guru Nanak, the first Sikh Guru and the founder of Sikhism, in Amritsar, India, Friday, November 19, 2021. (Photo by Prabhjot Gill/AP Photo) 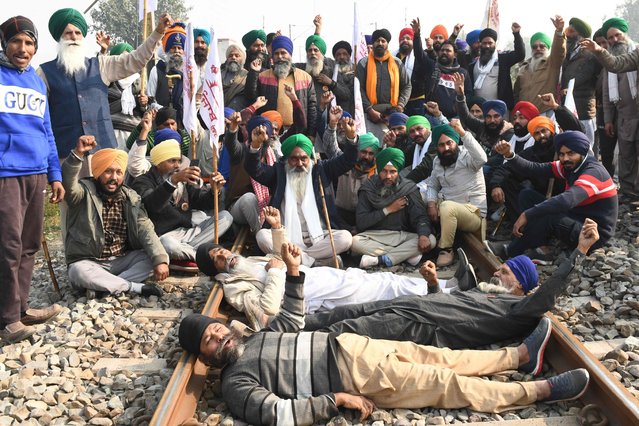 Farmers shout slogans as they block railway tracks during a demonstration demanding compensations and jobs for the families of those who died during protests against the central government's agricultural reforms and other economic issues at Devi Dasspura village on the outskirts of Amritsar on December 20, 2021. (Photo by Narinder Nanu/AFP Photo) 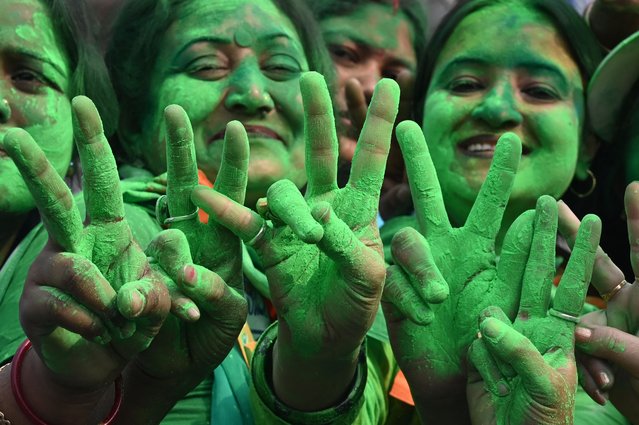