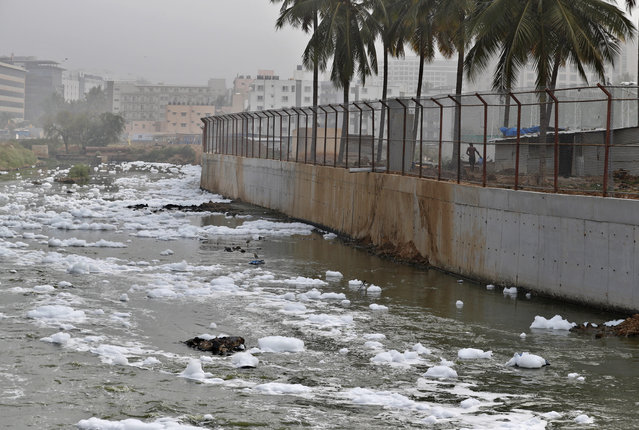 In this Monday, December 10, 2018 photo toxic froth from industrial pollution floats on Bellundur Lake in Bangalore, India. As politicians haggle at a U.N. climate conference in Poland over ways to limit global warming, the industries and machines powering our modern world keep spewing their pollution into the air and water. The fossil fuels extracted from beneath the earth's crust – coal, oil and gas – are transformed into the carbon dioxide that is now heating the earth faster than scientists had expected even a few years ago. (Photo by Aijaz Rahi/AP Photo) 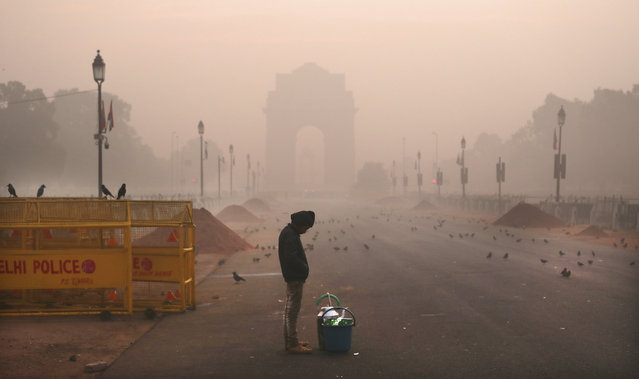 In this Wednesday, December 26, 2018, photo, a boy selling tea awaits customers early morning amidst smog in New Delhi, India. Authorities have ordered fire services to sprinkle water from high rise building to settle dust particles and stop burning of garbage and building activity in the Indian capital as the air quality hovered between severe and very poor this week posing a serious health hazard for millions of people. (Photo by Manish Swarup/AP Photo) 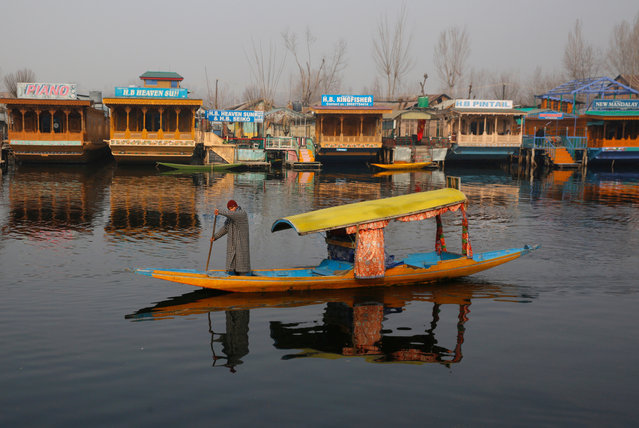 A Kashmiri boatman rows a boat on the waters of Dal Lake in Srinagar, the summer capital of Indian Kashmir, 20 December 2018. President's rule was imposed in Jammu and Kashmir on 19 December midnight after the expiry of six months of Governor's rule in the state. This is the first time since 1996 that the militancy-hit State has come under direct central rule. (Photo by Farooq Khan/EPA/EFE) 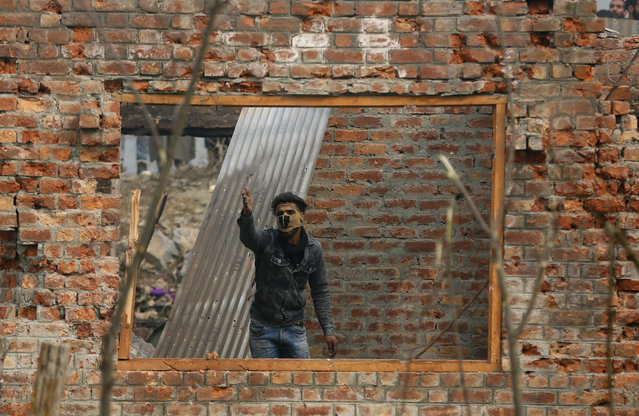 In this Sunday, December 9, 2018, file photo, a Kashmiri man shouts at an Indian policeman as he stands inside a damaged house at the site of a gun-battle in Mujagund area some 25 Kilometers (16 miles) from Srinagar, Indian controlled Kashmir. Indian troops killed three suspected rebels in the outskirts of disputed Kashmir's main city ending nearly 18-hour-long gunbattle, officials said Sunday. (Photo by Mukhtar Khan/AP Photo) 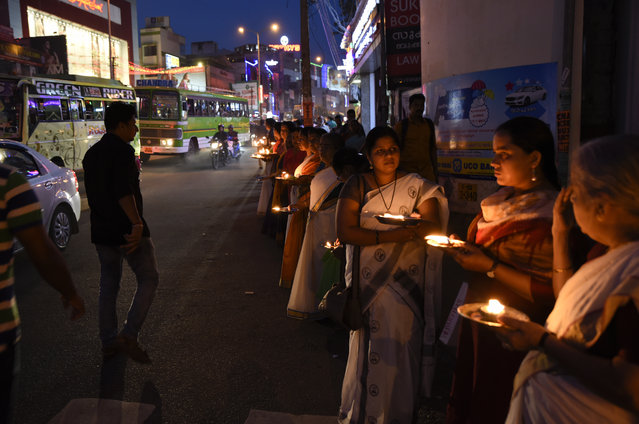 Hindu women hold oil lamps by a roadside as they protest a Supreme Court verdict allowing the entry of women of menstruating age at the Sabarimala temple, one of the world's largest Hindu pilgrimage sites, In Thiruvanathapuram, Kerala, India, Wednesday, December 26, 2018. As part of a statewide protest Wednesday, devotees lit lamps for 30 minutes by major roads from the northern end to the southern end the state of Kerala. (Photo by R.S. Iyer/AP Photo) 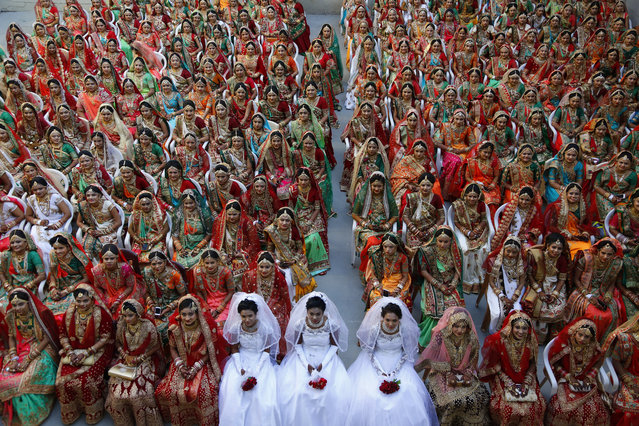 Indian brides sit together for a group photograph during a mass wedding in Surat, India, Sunday, December 23, 2018. Two hundred and sixty one young couples, including six Muslim and three Christian couples tied the knot at the mass wedding hosted by Indian businessman Mahesh Savani, who has been funding the weddings of fatherless girls in the city of Surat for several years. Weddings in India are expensive affairs with the bride's family traditionally expected to pay the groom a large dowry of cash and gifts. (Photo by Ajit Solanki/AP Photo) 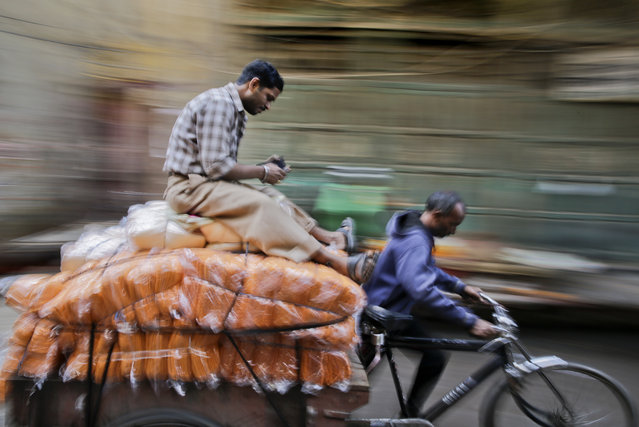 A man sits on stacks of towels transported on a cycle rickshaw cart through a market in the old part of New Delhi, India, Saturday, December 1, 2018. Old Delhi despite being extremely crowded and dilapidated still serves as the symbolic heart of the city. (Photo by Altaf Qadri/AP Photo) 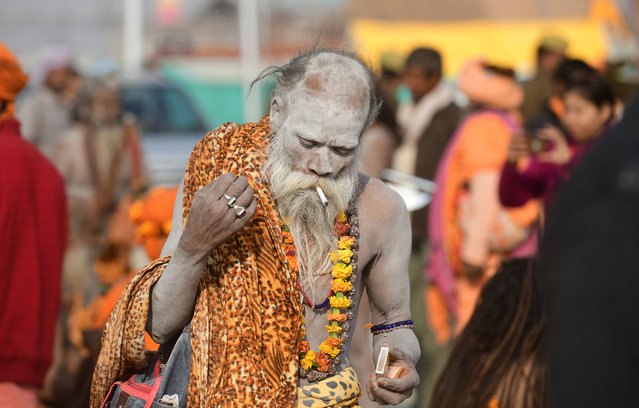 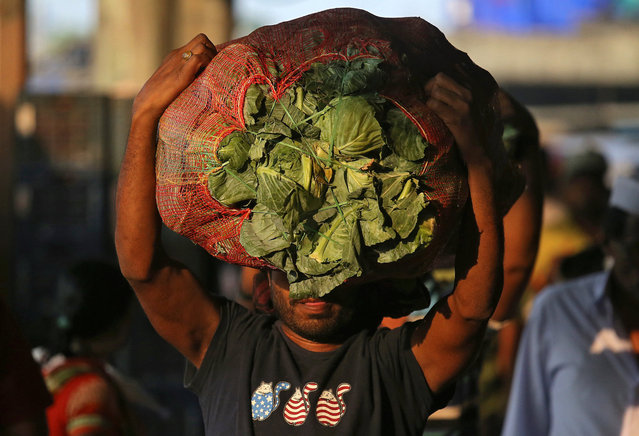 A man carries a sack filled with cabbage at a wholesale market in Mumbai, India, December 14, 2018. (Photo by Francis Mascarenhas/Reuters) 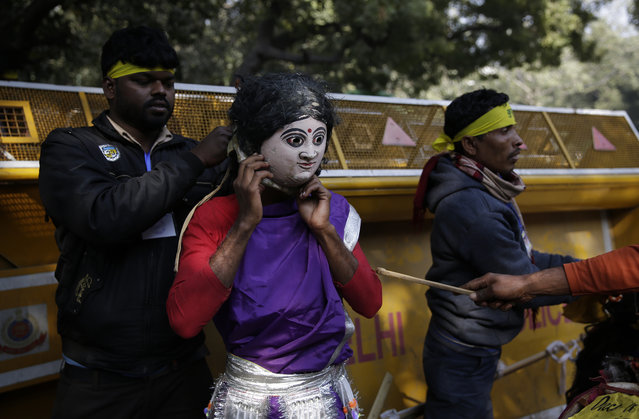 A member of India's Kudumi community wears a mask during a protest in New Delhi, India, Tuesday, December 18, 2018. They were demanding tribal status be reinstated for their community, which had been withdrawn by the Indian government in 1950. (Photo by Altaf Qadri/AP Photo) 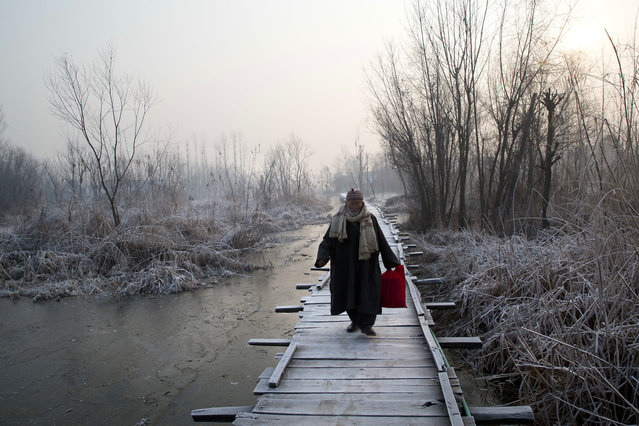 A Kashmiri man walks on a foot bridge in the interiors of Dal Lake on a cold morning in Srinagar, Indian controlled Kashmir, Friday, December 28, 2018. Authorities in Kashmir issued a health advisory as the cold wave intensified across the region with Srinagar recording minus 7.7 degrees celsius on Friday. (Photo by Dar Yasin/AP Photo) 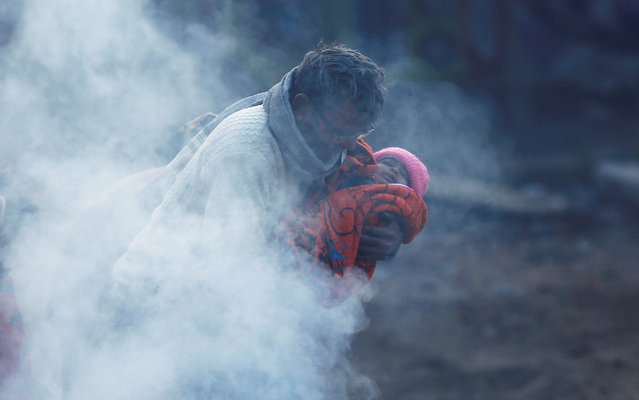 A man holding a baby wrapped in a blanket stands next to a bonfire on a cold winter morning in New Delhi, India, December 19, 2018. (Photo by Adnan Abidi/Reuters) 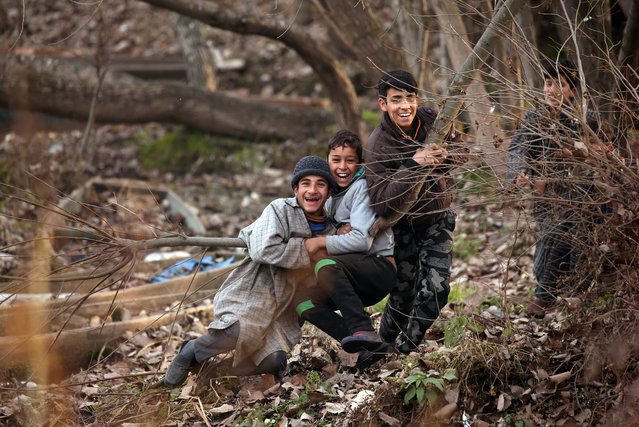 Boys play amidst the bushes on a cold winter day on the outskirts of Srinagar on December 11, 2018. (Photo by Danish Ismail/Reuters) 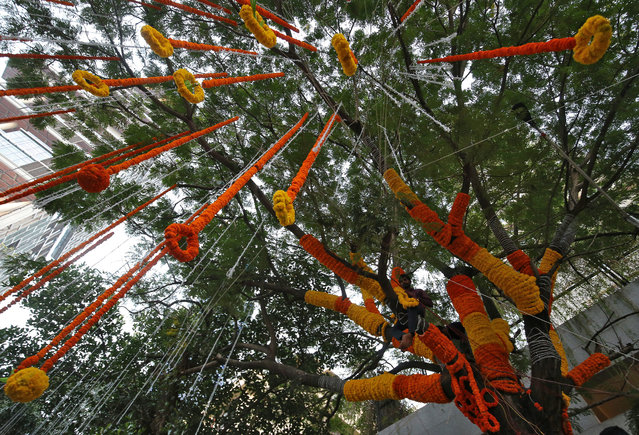 A worker decorates a tree outside Antilia, the house of the Chairman of Reliance Industries Mukesh Ambani, ahead of his daughter's wedding, in Mumbai, December 11, 2018. (Photo by Francis Mascarenhas/Reuters) 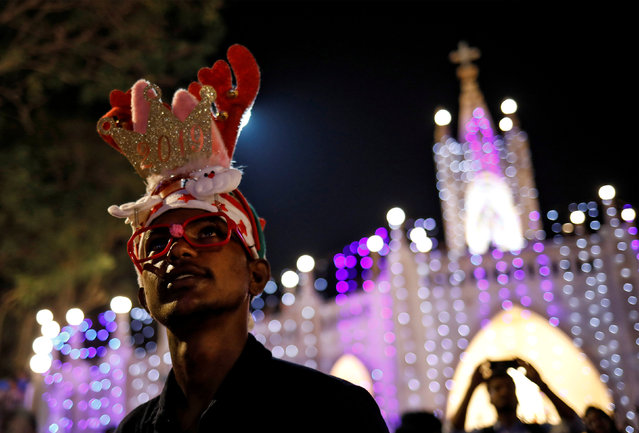 A vendor sells Christmas goodies as worshippers arrive to attend a mass at a church in Mumbai, India on December 24, 2018. (Photo by Danish Siddiqui/Reuters) 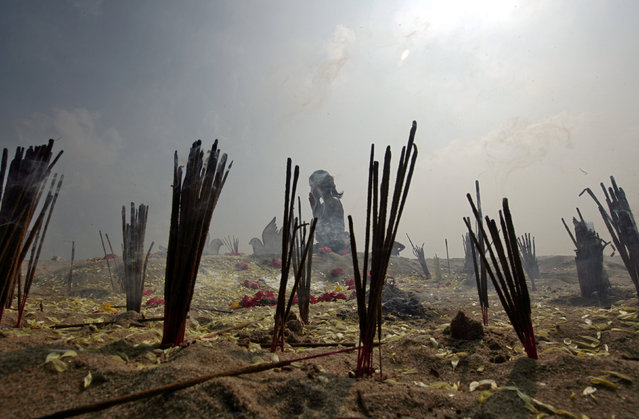 Incense sticks burn as a girl prays during a prayer ceremony for the victims of the 2004 tsunami on the 14th anniversary of the disaster, at Marina beach in Chennai, India, December 26, 2018. (Photo by P. Ravikumar/Reuters) 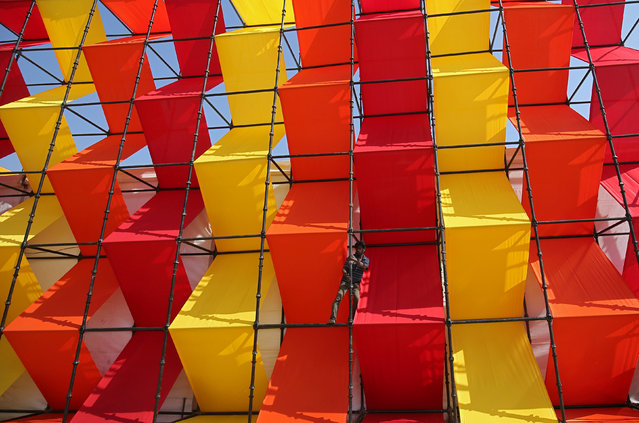 A worker climbs down a decorated pandal, or a platform, in Ahmedabad, India, December 26, 2018. (Photo by Amit Dave/Reuters) 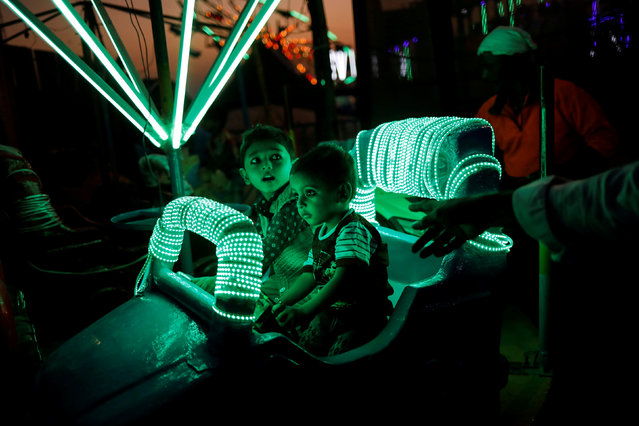 Children enjoy a ride at a fair in Mumbai, India, December 27, 2018. (Photo by Danish Siddiqui/Reuters) 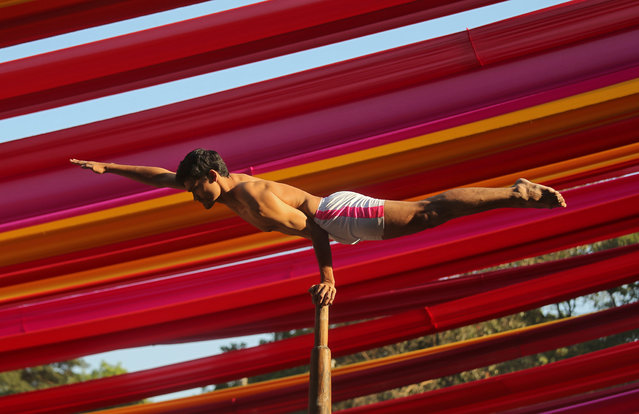