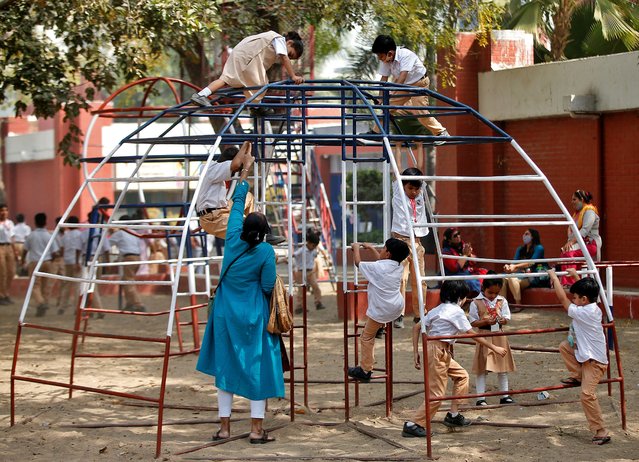 Students play during recess at a school after a majority of schools were reopened following their closure due to the coronavirus disease (COVID-19) pandemic, in Ahmedabad, India, February 25, 2022. (Photo by Amit Dave/Reuters) 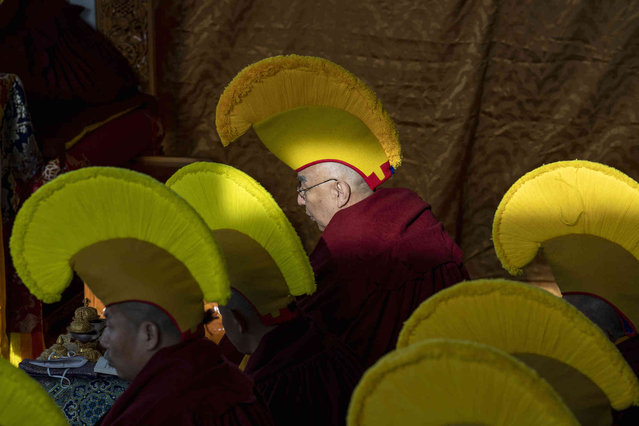 Exile Tibetan Buddhist monks in ceremonial hats gather for a morning prayer assembly at the Tsuglakhang Temple, which opened for the first time since early 2020, in Dharmsala, India, Thursday, March 3, 2022. Tibetans the world over are celebrating the beginning of their new year “Losar”. (Photo by Ashwini Bhatia/AP Photo) 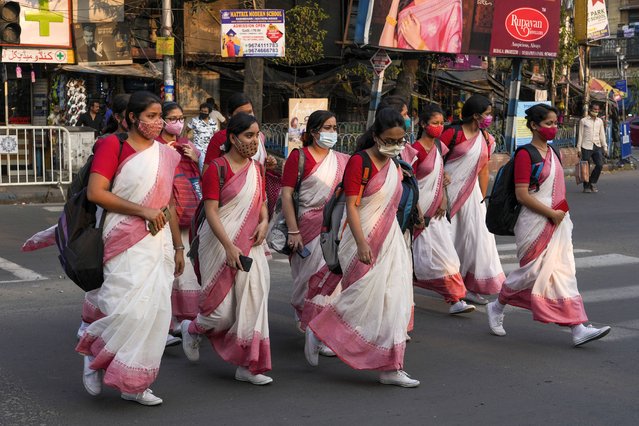 A group of Indian students wearing face masks as a precaution against the coronavirus return from their school in Kolkata, India, Thursday, March 3, 2022. Slowly but steadily, life in South Asia is returning to normal, and people hope the worst of the COVID-19 pandemic is behind them. Experts are optimistic that the omicron surge, which brought relatively low levels of death, has reinforced immunity from vaccines, which are widespread in the region. (Photo by Bikas Das/AP Photo) 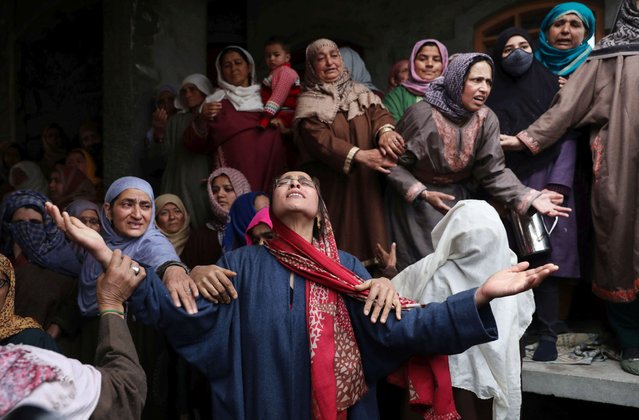 Relatives, friends and neighbors of slain 24-year-old girl Rafiya Nazir react during her funeral in Srinagar, India, 07 March 2022. Two people, including Rafiya Nazir, were killed and more than 30 others were injured when a grenade was thrown in the middle of the crowd at a busy market in Srinagar on 06 March 2022. (Photo by Farooq Khan/EPA/EFE) 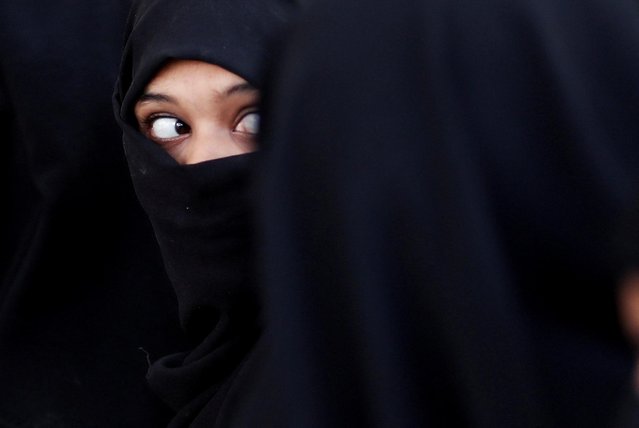 A Muslim woman wearing a veil stands in queue to cast her vote at a polling station during the last phase of state assembly election in Varanasi in the northern state of Uttar Pradesh, India, March 7, 2022. (Photo by Adnan Abidi/Reuters) 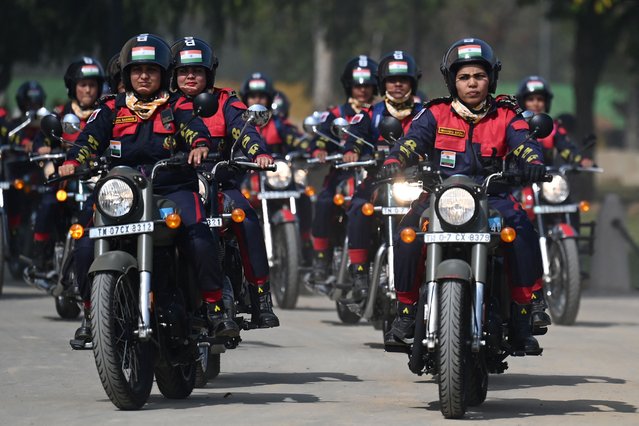 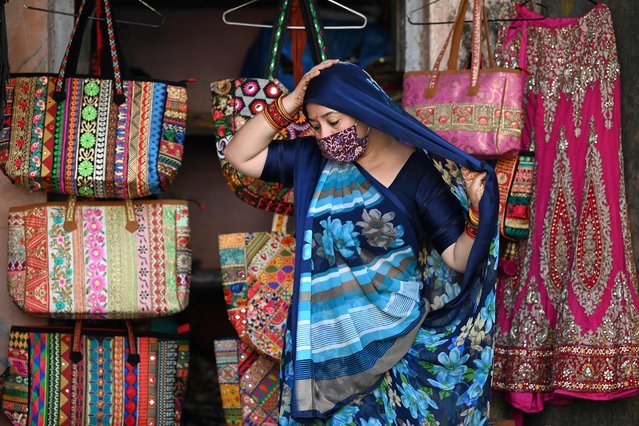 A woman shopkeeper adjusts her saree to cover her head while waiting for customers at a roadside shop in New Delhi on March 8, 2022, on the occasion of International Women's Day. (Photo by Sajjad Hussain/AFP Photo) 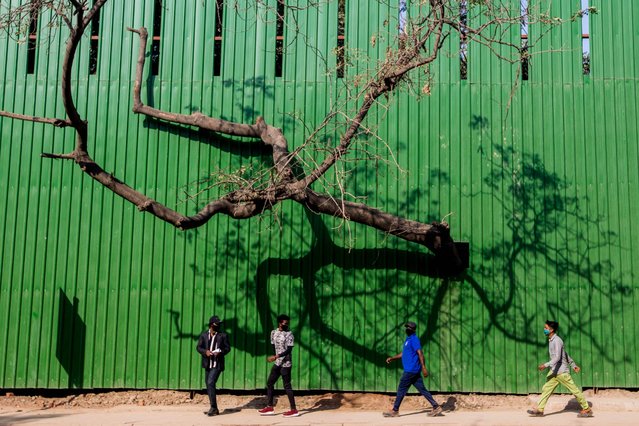 Men walk along a street past a construction site fence in New Delhi on March 9, 2022. (Photo by Xavier Galiana/AFP Photo) 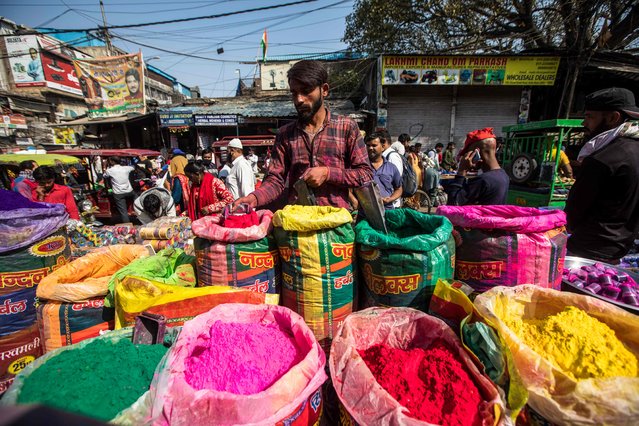 A vendor selling colored powder for the upcoming Hindu festival Holi waits for customers at Sadar Bazaar market in the old quarters of New Delhi on March 9, 2022. (Photo by Xavier Galiana/AFP Photo) 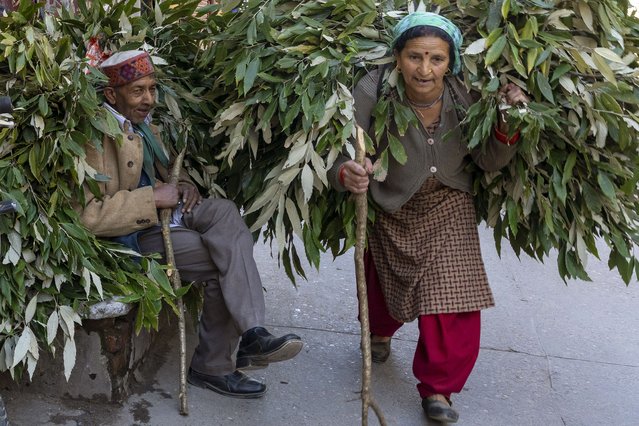 A man rests at the roadside as a woman carries a load of oak leaves collected from the wild in Dharmsala, India, Wednesday, March 9, 2022. (Photo by Ashwini Bhatia/AP Photo) 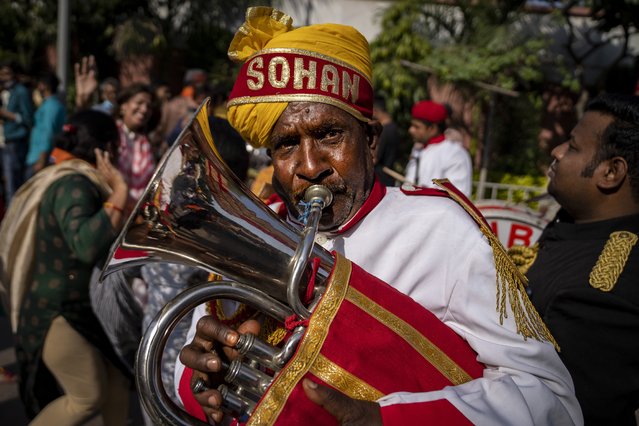 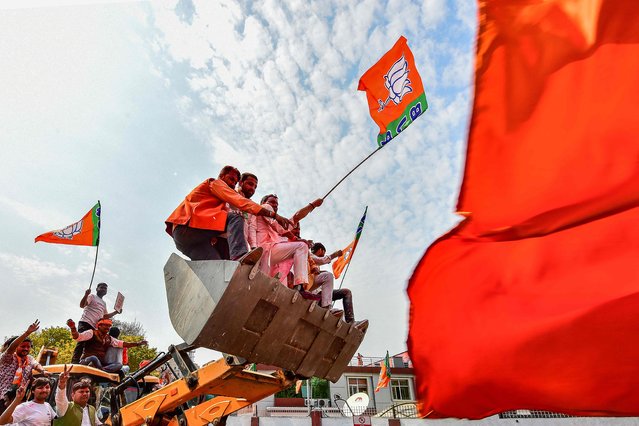 Supporters of India's Bharatiya Janata Party (BJP) celebrate outside the party office in Lucknow on March 10, 2022, on the day of counting of votes for the Uttar Padesh state asembly elections. (Photo by Sanjay Kanojia/AFP Photo) 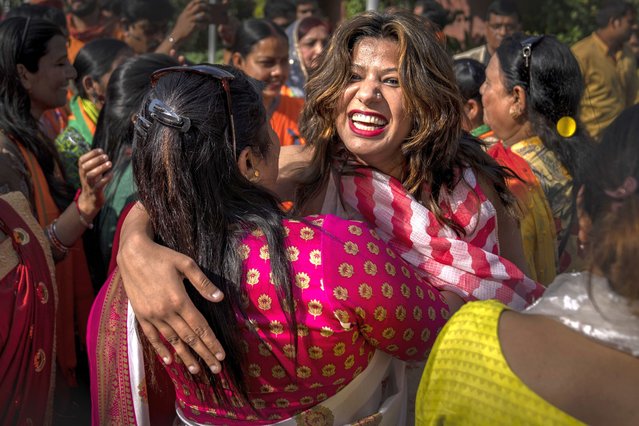 Supporters of Bharatiya Janata Party (BJP) embrace each other as they celebrate election results at the party headquarters in New Delhi, India, Thursday, March 10, 2022. (Photo by Altaf Qadri/AP Photo) 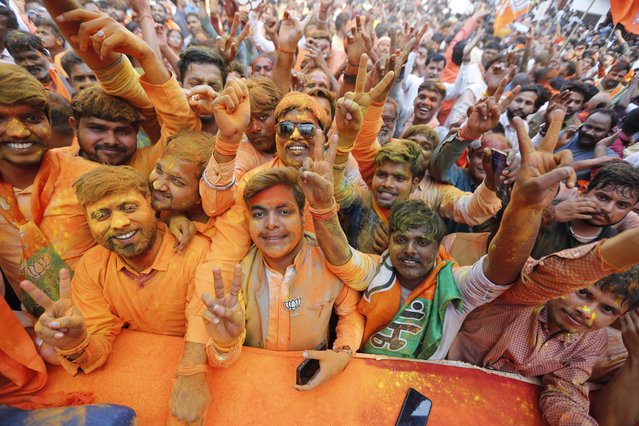 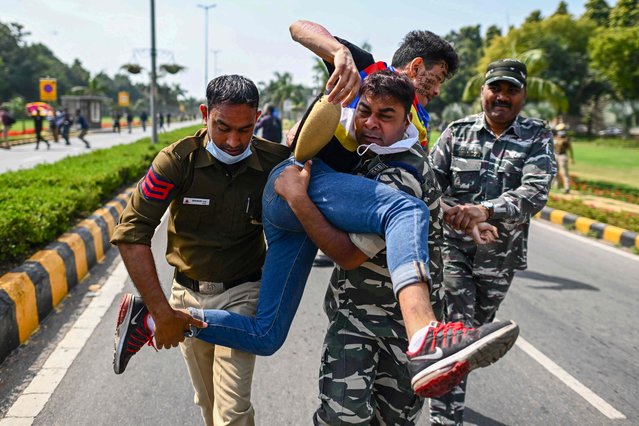 Police detain a protester during a demonstration near the Chinese embassy to mark the 63rd Tibetan uprising anniversary in New Delhi on March 10, 2022. (Photo by Jewel Samad/AFP Photo) 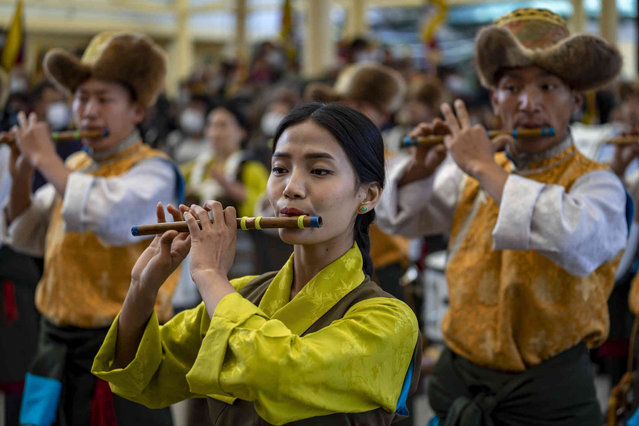 Exile Tibetan artists play their national anthem as they gather to mark the anniversary of the 1959 Lhasa uprising in Dharmsala, India, Thursday, March 10, 2022. Hundreds of Tibetans had come out to protest against Chinese rule in the Tibetan capital in 1959. (Photo by Ashwini Bhatia/AP Photo) 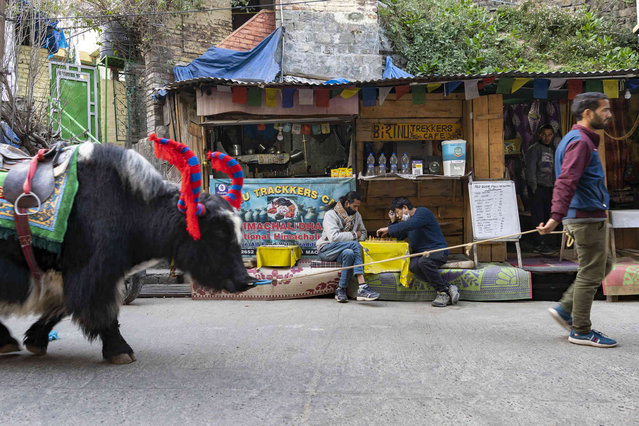 People play chess as a man walks past with his yak in Dharmsala, India, Friday, March 11, 2022. (Photo by Ashwini Bhatia/AP Photo) 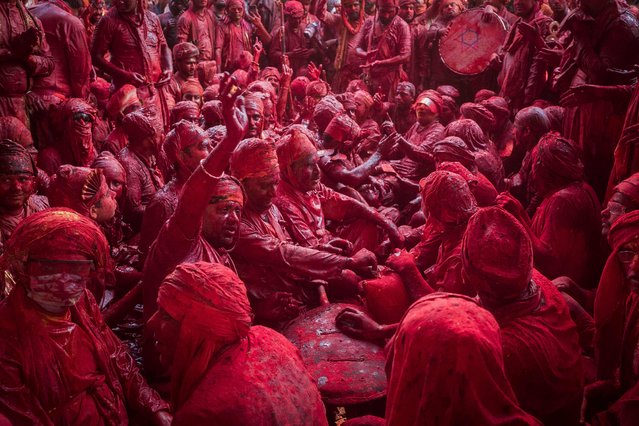 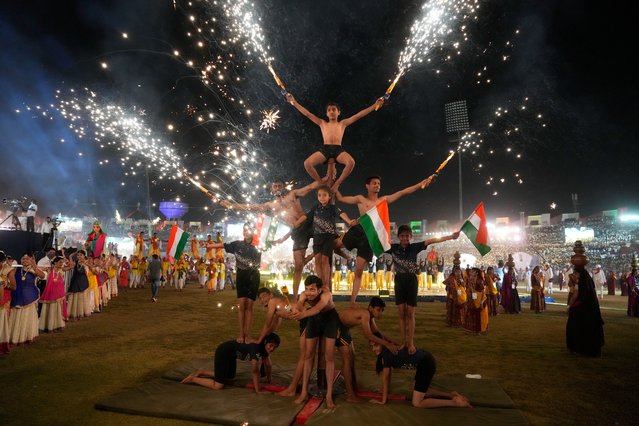 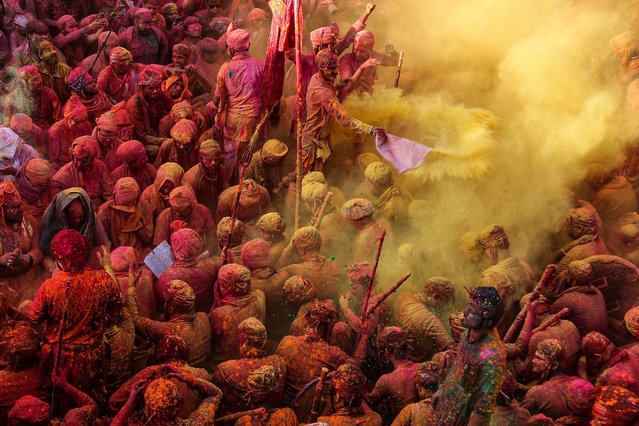