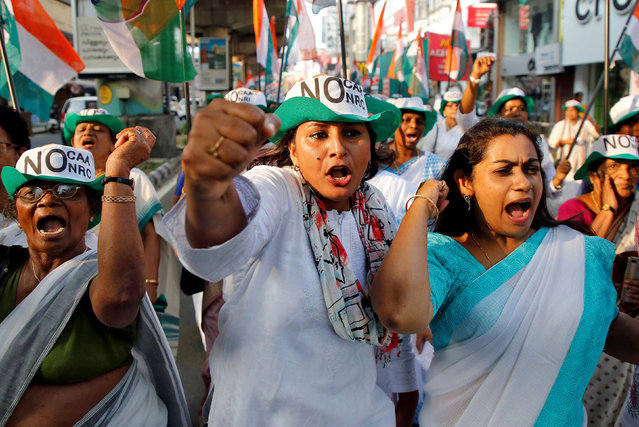 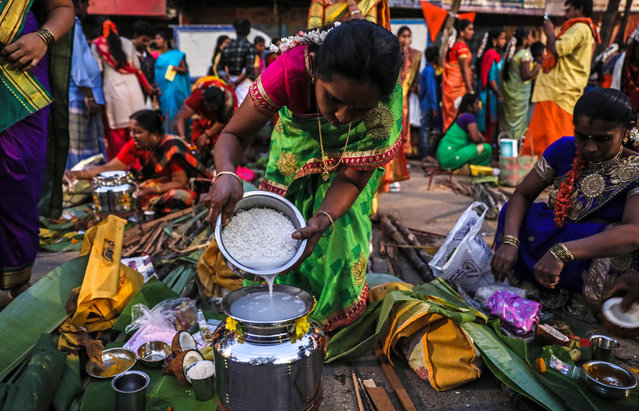 A Tamilian woman cooks pongal, a traditional rice dish, during the Thai Pongal festival celebration in Mumbai, India, 15 January 2020. Pongal, very popular in South Indian states, is a famous dish made of rice boiled in milk with jaggery and other sweeteners. Thai Pongal is a famous harvest festival celebrated by Tamilians all across the world, widely celebrated on 15 January. The significance is the offering of thanks to the sun and weather for helping obtain a bountiful harvest. (Photo by Divyakant Solanki/EPA/EFE) 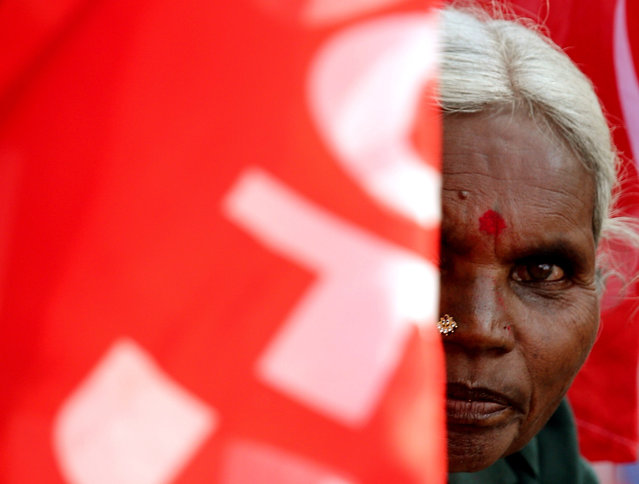 Members of different trade unions shout slogans during a nationwide general strike called by trade unions, in Bangalore, India, 08 January 2020. Activists and laborers took part in protest marches organized by trade unions during a nationwide general strike on 08 January 2020, organized to demand the government raise minimum wages, provide pensions to all, along with the control on the price of essential commodities. (Photo by Jagadeesh N.V./EPA/EFE) 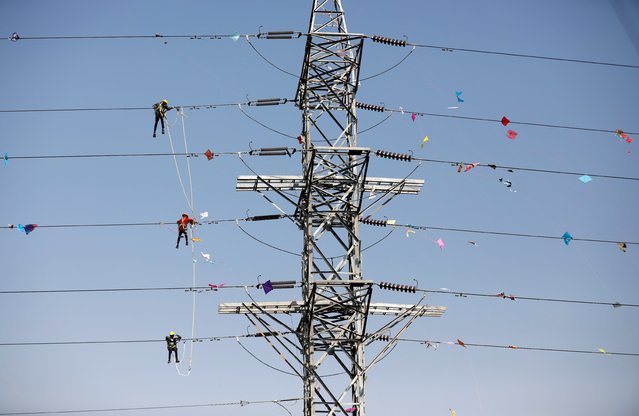 Workers of Torrent Power Limited remove kites and thread tangled up in electric power cables after the end of the kite flying season in Ahmedabad, India, January 16, 2020. (Photo by Amit Dave/Reuters) 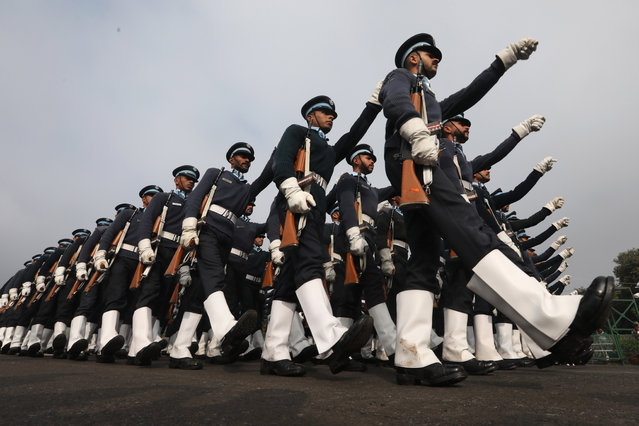 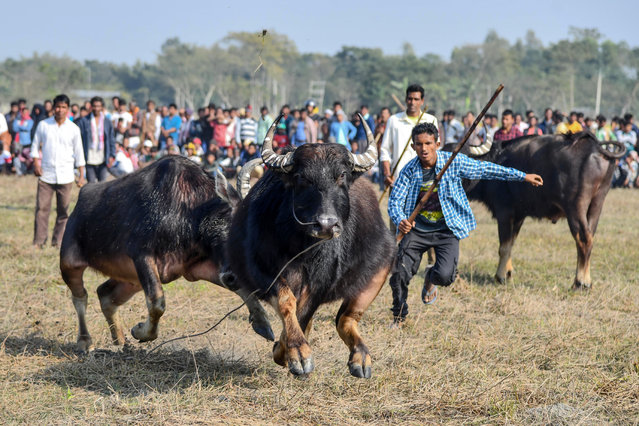 Buffalo owners try to control their buffalos during a traditional buffalo fight held as part of Bhogali Bihu festival at Boidyabori village, some 80 km from Guwahati on January 16, 2020. Magh Bihu is the harvest festival of north eastern Assam state and is observed in the Assamese month of Magh, that coincides with January. (Photo by Biju Boro/AFP Photo) 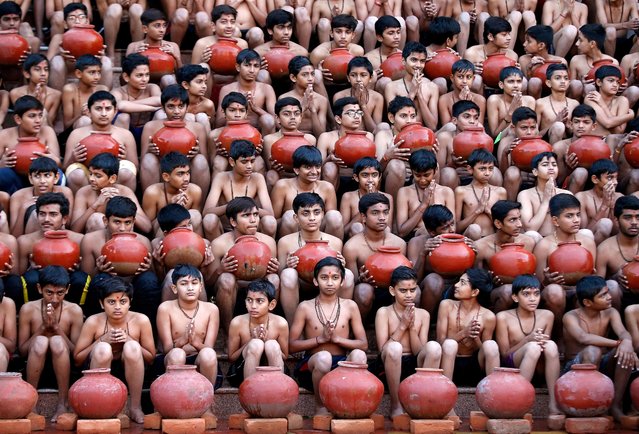 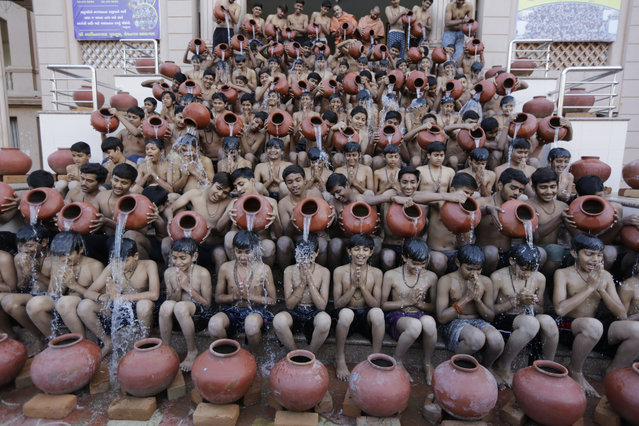 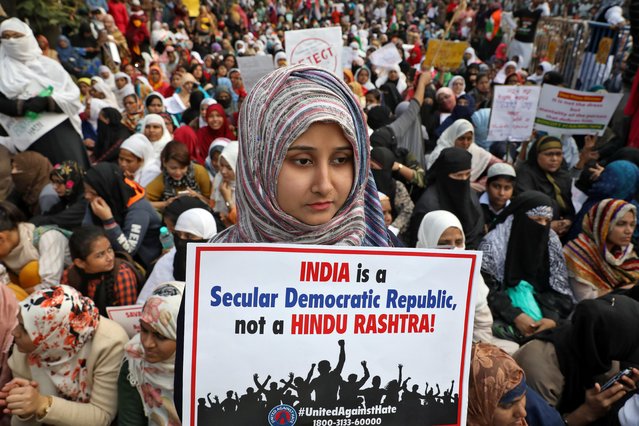 Demonstrators display placards as they attend a protest rally against a new citizenship law, in Kolkata, India, January 10, 2020. (Photo by Rupak De Chowdhuri/Reuters) 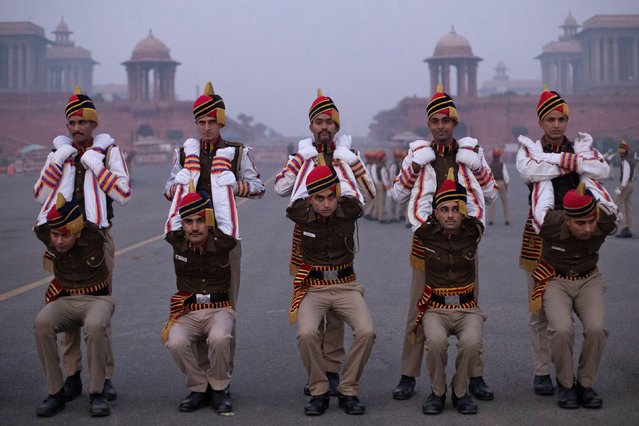 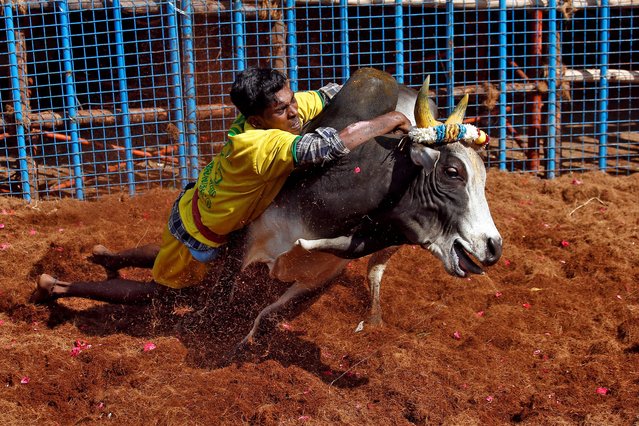 A villager tries to control a bull during a bull-taming festival, which is part of south India's harvest festival of Pongal, on the outskirts of Madurai town, in the southern Indian state of Tamil Nadu, India, January 15, 2020. (Photo by P. Ravikumar/Reuters) 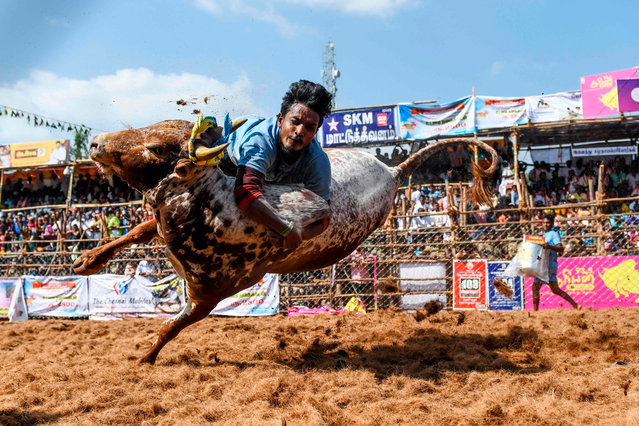 A participant jumps trying to control a bull during the annual bull taming “Jallikattu” festival in Palamedu village on the outskirts of Madurai in the southern Indian state of Tamil Nadu on January 16, 2020. (Photo by Arun Sankar/AFP Photo) 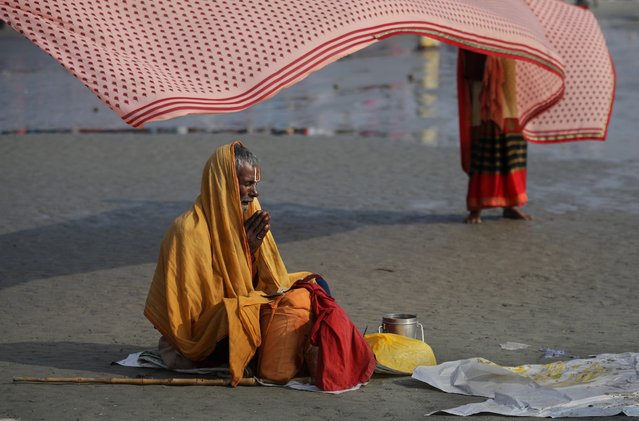 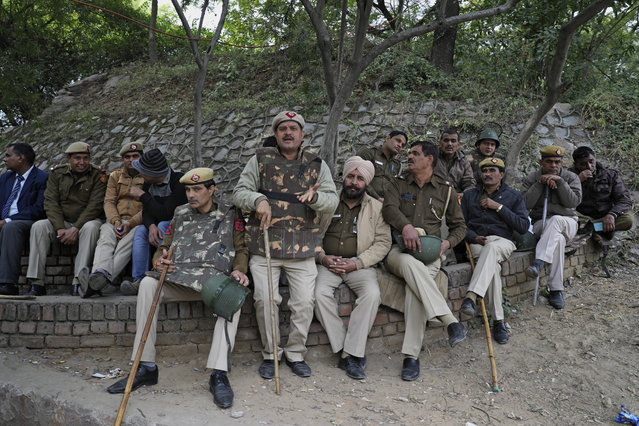 Members of Delhi police sit on a parapet outside the Jawaharlal Nehru University in New Delhi, India, Monday, January 6, 2020. More than 20 people were injured in the attack opposition lawmakers are trying to link to the government. (Photo by Altaf Qadri/AP Photo) 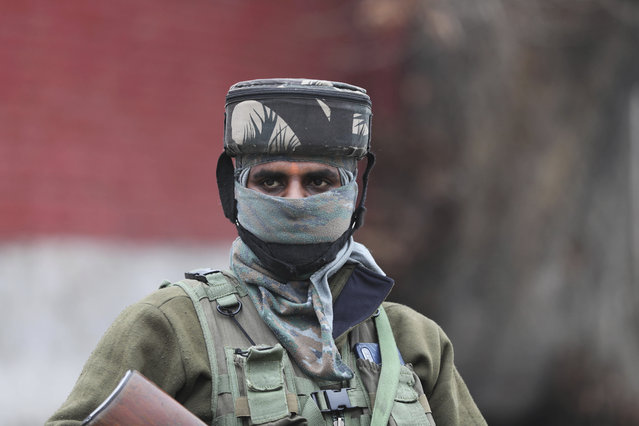 An Indian paramilitary soldier guards as a convoy of New Delhi-based diplomats passes through Srinagar, Indian controlled Kashmir, Thursday, January 9, 2020. Envoys from 15 countries including the United States are visiting Indian-controlled Kashmir starting Thursday for two days, the first by New Delhi-based diplomats since India stripped the region of its semi-autonomous status and imposed a harsh crackdown in early August. (Photo by Mukhtar Khan/AP Photo) 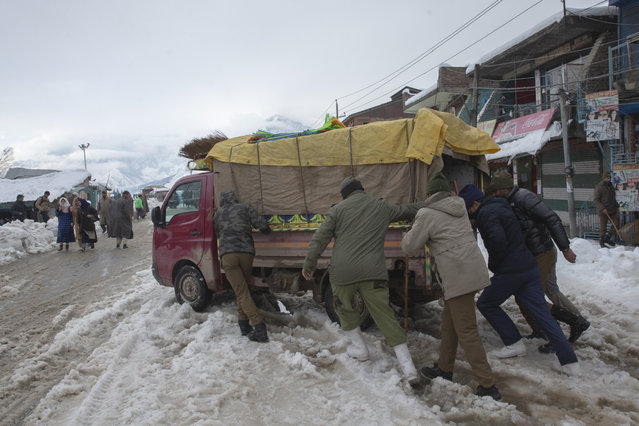 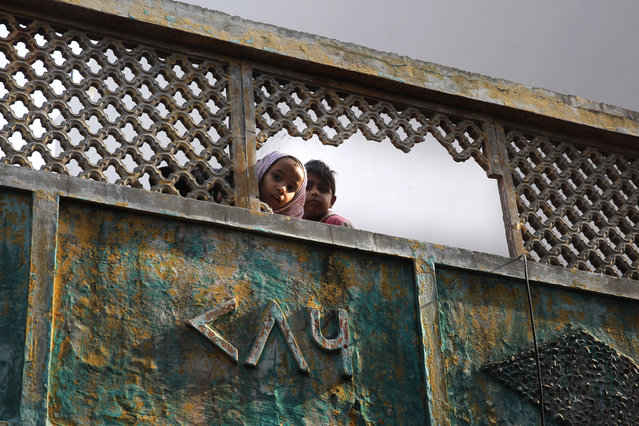 In this Tuesday, December 24, 2019, photo, Muslim children look through broken fencing of their balcony in a congested neighborhood where five people died allegedly in police firing during protests against Citizenship Amendment Act, in Meerut, India. Tens of thousands of people have taken to the streets to oppose a new law that grants a path to citizenship for immigrants of every religion except Islam. Many say the law, passed by Prime Minister Narendra Modi's Hindu-nationalist government, discriminates against Muslims and undermines the country's secular foundations. (Photo by Rajesh Kumar Singh/AP Photo) Indian school children perform yoga during the inauguration of an international kite festival in Ahmadabad, India, Tuesday, January 7, 2020. Kite flyers from various countries and across India are participating in the festival that is annually held on the Sabarmati riverfront in Ahmadabad. (Photo by Ajit Solanki/AP Photo) 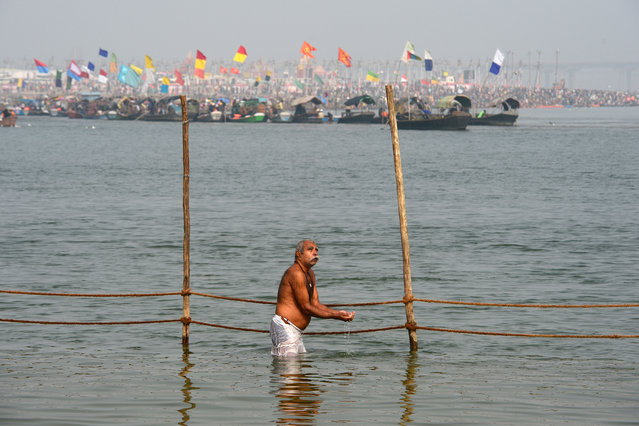 A devotee offers prayers as he takes a holy dip in the Ganges river to observe Paush Purnima festivities, which marks the beginning of the Magha month in the Hindu calendar, during the Magh Mela festival in Allahabad on January 10, 2020. (Photo by Sanjay Kanojia/AFP Photo) 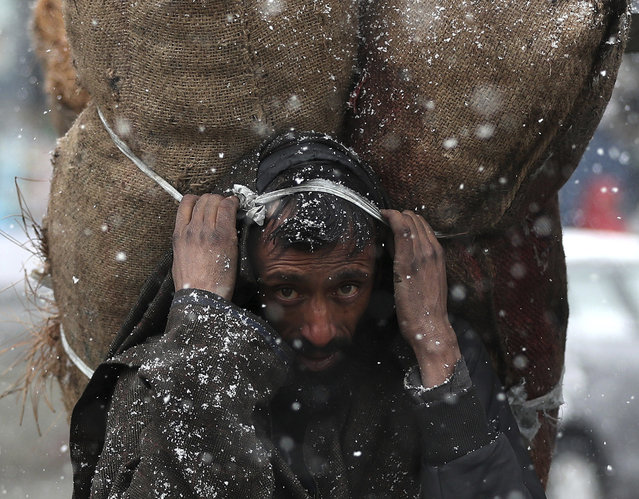 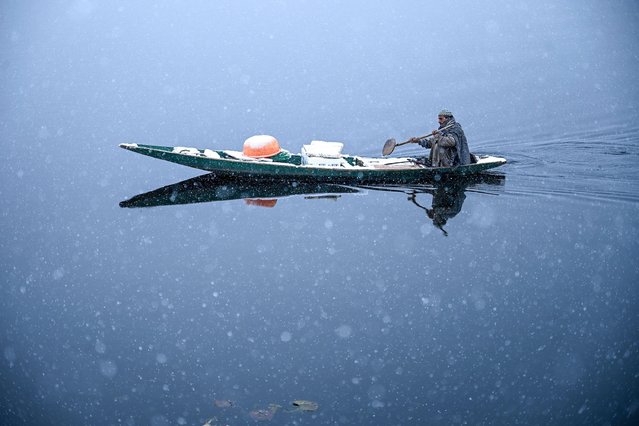 A man rides a boat in the Dal Lake during a snowfall in Srinagar on January 12, 2020. (Photo by Tauseef Mustafa/AFP Photo) 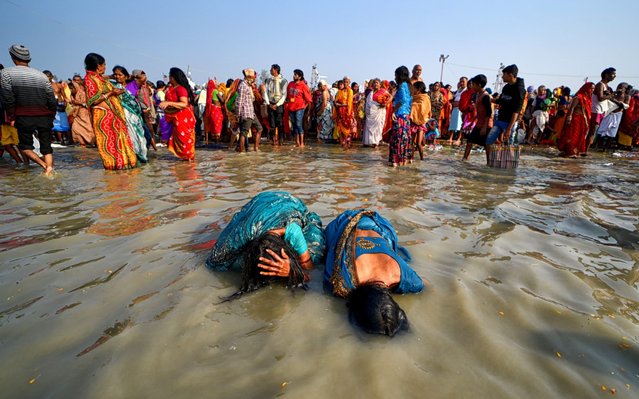 Hindu devotees taking a Holy Bath during the festival. Gangasagar is one of the religious spots for Hindu Pilgrims situated at the Bay of Bengal where millions of devotees come to take a Holy bath annually during Makar Sankranti (Transition of the Sun) as per Hindu calendar and offer prayers to Kapil Muni Temple. The date for this Festival usually fall between 13 to 15 January of every year. (Photo by Avishek Das/Echoes Wire/Barcroft Media via Getty Images)
Edit Del
27 Jan 2020 00:05:00, post received 0 comments
Publication archive:
←   →
Popular tags:
All tags
Last searches: