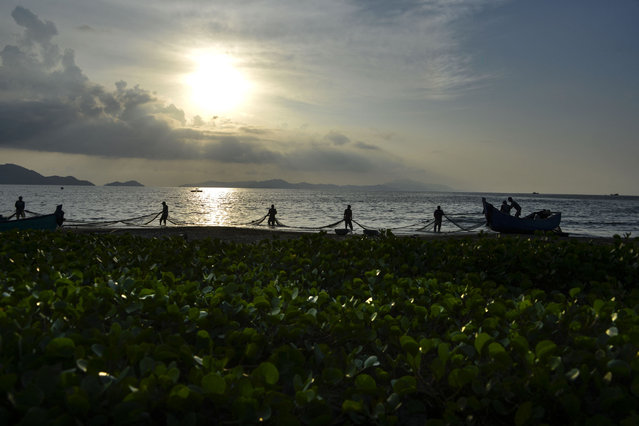 Fishermen pull their nets after fishing during sunset at a beach in Banda Aceh on April 8, 2021. (Photo by Chaideer Mahyuddin/AFP Photo) 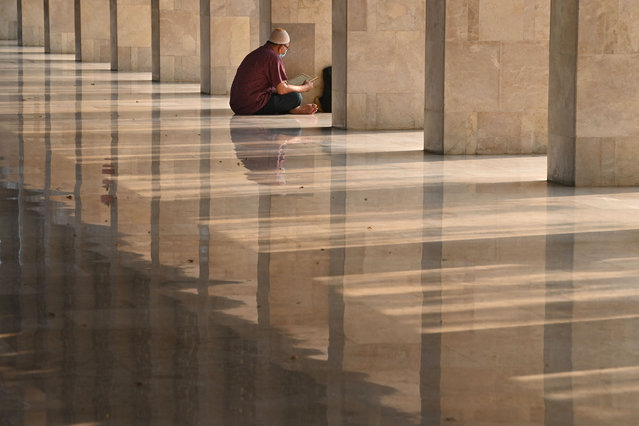 A Muslim man reads a copy of the Koran during Ramadan at the Istiqlal mosque in Jakarta on April 22, 2021. (Photo by Adek Berry/AFP Photo) 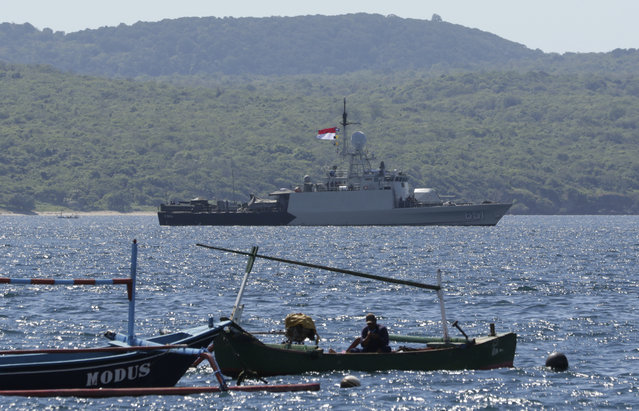 Indonesian Navy ship KRI Singa sails to take part in the search for submarine KRI Nanggala that went missing while participating in a training exercise on Wednesday, off Banyuwangi, East Java, Indonesia, Thursday, April 22, 2021. Indonesia's navy ships are intensely searching the waters where one of its submarines was last detected before it disappeared, as neighboring countries are set to join the complex operation. (Photo by AP Photo/Stringer) 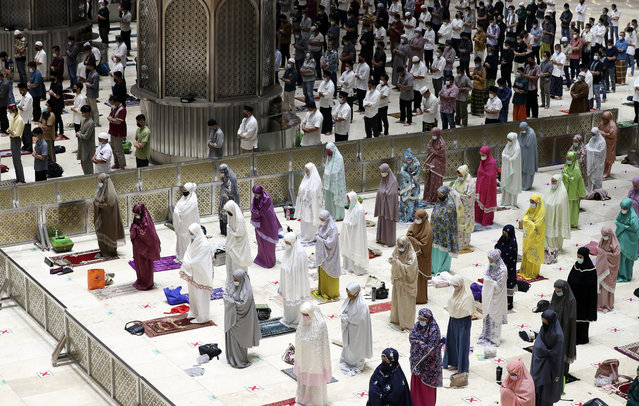 Indonesian Muslims pray spaced apart as they practice social distancing to curb the spread of the new coronavirus during an evening prayer called "tarawih" marking the first eve of the holy fasting month of Ramadan at Istiqlal Mosque in Jakarta, Indonesia. Monday, April 12, 2021. During Ramadan, the holiest month in Islamic calendar, Muslims refrain from eating, drinking, smoking and s*x from dawn to dusk. (Photo by Achmad Ibrahim/AP Photo) 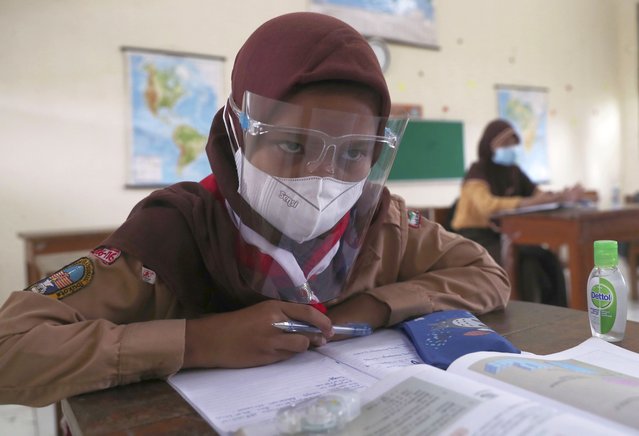 A student wearing a face shield sits spaced apart during a trial run of a class with COVID-19 protocols at an elementary school in Jakarta, Indonesia, Wednesday, April 7, 2021. (Photo by Tatan Syuflana/AP Photo) 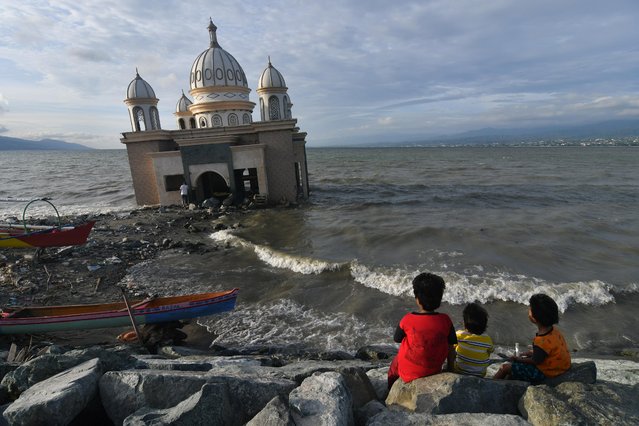 Children sit near a mosque as they wait to break the fast during the holy fasting month of Ramadan in Palu, Central Sulawesi Province, Indonesia,on April 13, 2021. (Photo by Mohamad Hamzah/Antara Foto via Reuters) 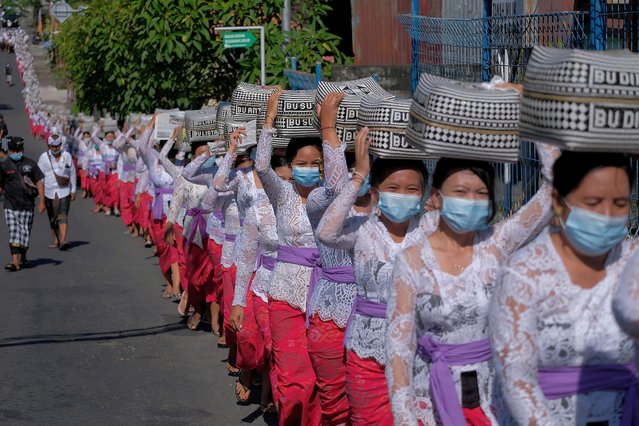 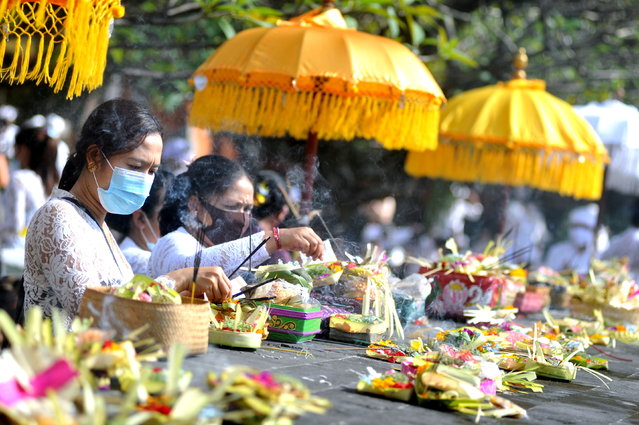 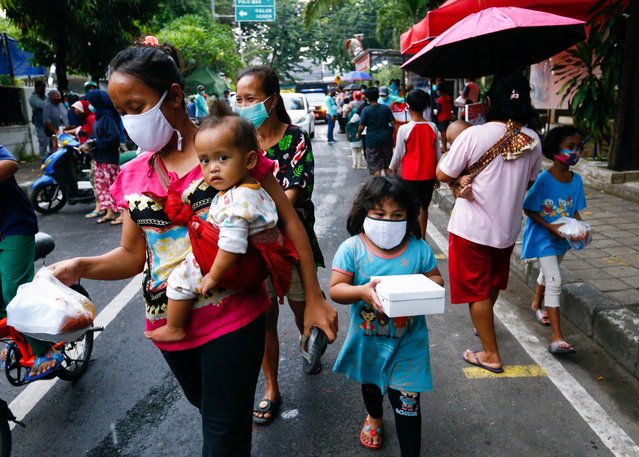 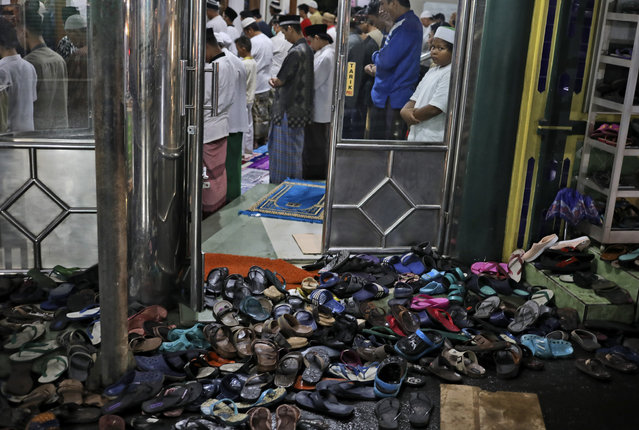 Footwear are left outside as people perform perform an evening prayer called “tarawih” during the first evening of the holy fasting month of Ramadan, at a mosque in Jakarta, Indonesia, Monday, April 12, 2021. (Photo by Dita Alangkara/AP Photo) 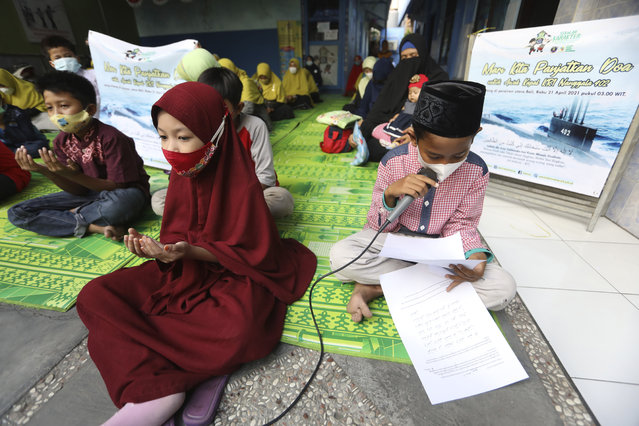 Students pray during a vigil for the crew of Indonesian Navy submarine KRI Nanggala that went missing while participating in a training exercise on Wednesday, at an elementary school in Surabaya, East Java, Indonesia, Friday, April 23, 2021. Indonesian navy ships scoured the waters off Bali on Friday as they raced against time to find the submarine that disappeared two days ago and has less than a day's supply of oxygen left for its 53 crew. (Photo by Trisnadi/AP Photo) 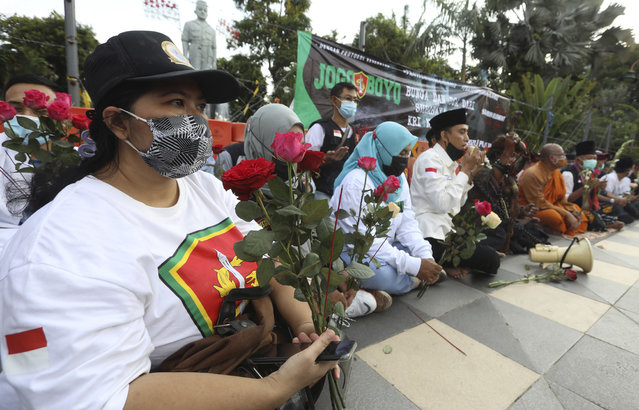 Interfaith activists hold flowers during a prayer for the crew of Indonesian Navy submarine KRI Nanggala that sank in Bali Sea, in Surabaya, East Java, Indonesia, Sunday, April 25, 2021. Indonesia's military on Sunday officially admitted there was no hope of finding survivors from the submarine that sank and broke apart last week with 53 crew members aboard, and that search teams had located the vessel's wreckage on the ocean floor. (Photo by Trisnadi/AP Photo) 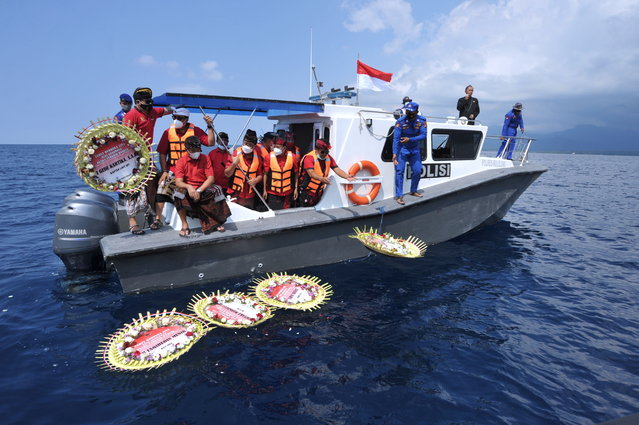 People throw flowers and petals with names of the sunken KRI Nanggala-402 submarine crew members from the boat during a prayer at the sea near Labuhan Lalang, Bali, Indonesia on April 26, 2021. (Photo byFikri Yusuf/Antara Foto via Reuters) 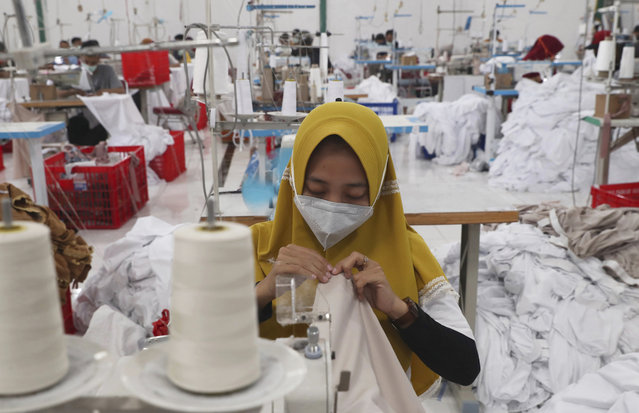 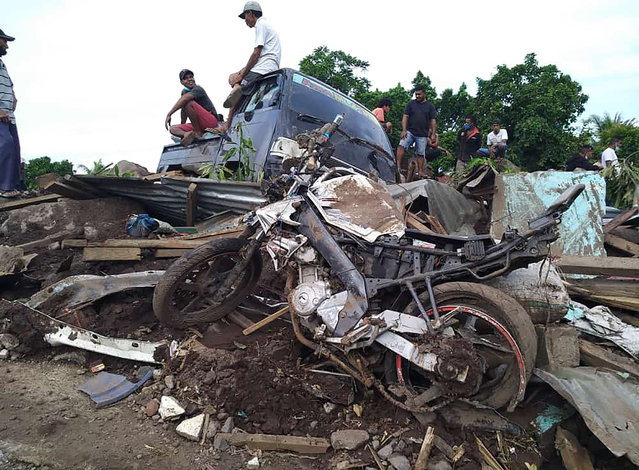 People sit on the wreckage of a truck at a flood-affected village in Nalelamadiken on Adonara Island, East Nusa Tenggara province, Indonesia, Wednesday, April 7, 2021. Multiple disasters triggered by Tropical Cyclone Seroja in eastern Indonesia and neighboring East Timor have left a number of people dead or missing. (Photo by Rofinus Monteiro/AP Photo) 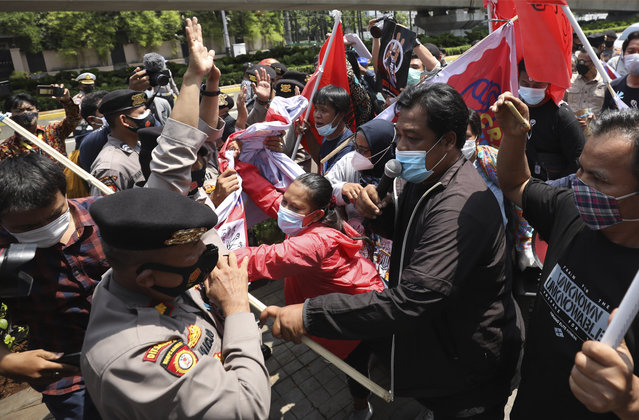 Activists scuffle with police officers as they are dispersed during a rally against Myanmar's military coup near the Association of Southeast Asian Nations (ASEAN) Secretariat ahead of a leaders' meeting in Jakarta, Indonesia, Saturday, April 24, 2021. Southeast Asian leaders are to meet Myanmar's top general and coup leader in an emergency summit in Indonesia Saturday, and are expected to press calls for an end to violence by security forces that has left hundreds of protesters dead as well as the release of Aung San Suu Kyi and other political detainees. (Photo by Dita Alangkara/AP Photo) 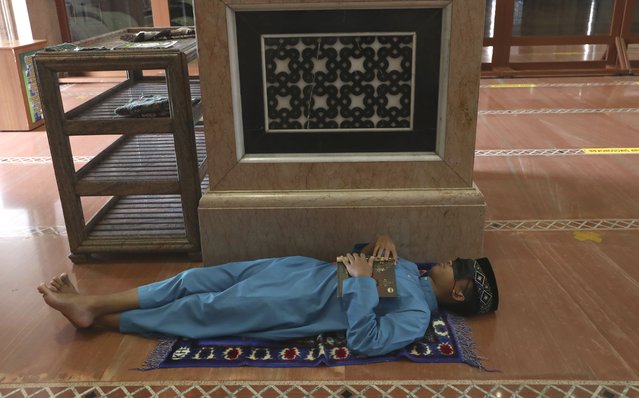 A man takes a nap while waiting for the time to break his fast at the Kubah Mas mosque in Depok, Indonesia, Friday, April 16, 2021. (Photo by Tatan Syuflana/AP Photo) 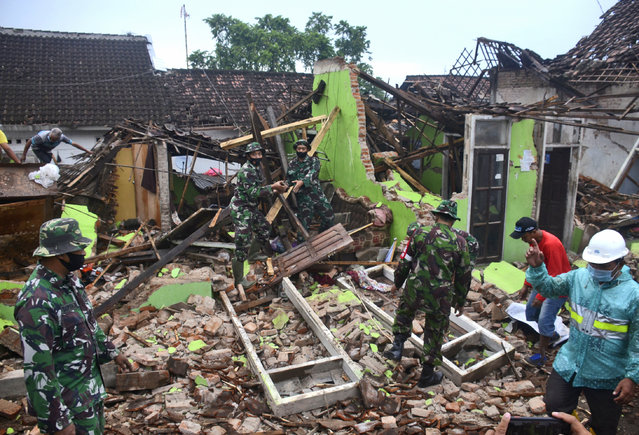 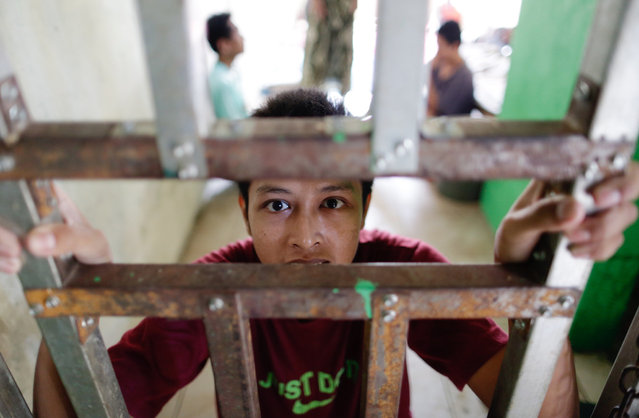 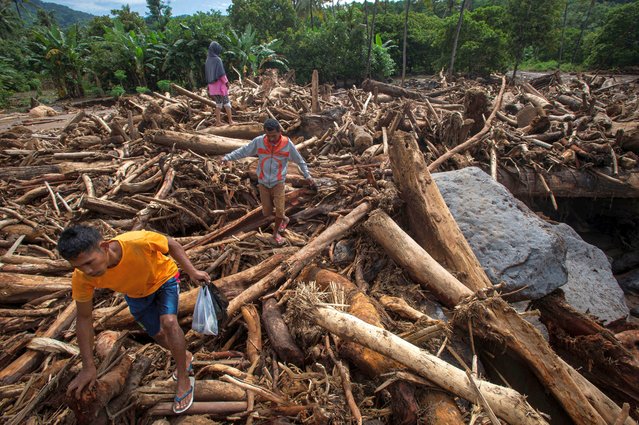