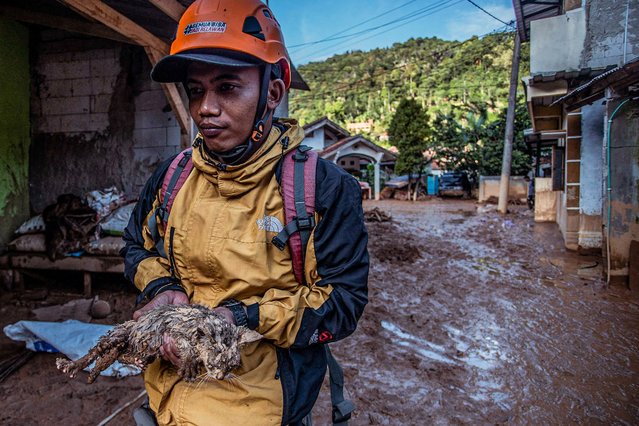 A rescuer helps a cat after a flash flood triggered by heavy rains hit residential areas in Purasari village in Bogor on June 24, 2022. (Photo by Aditya Aji/AFP Photo) 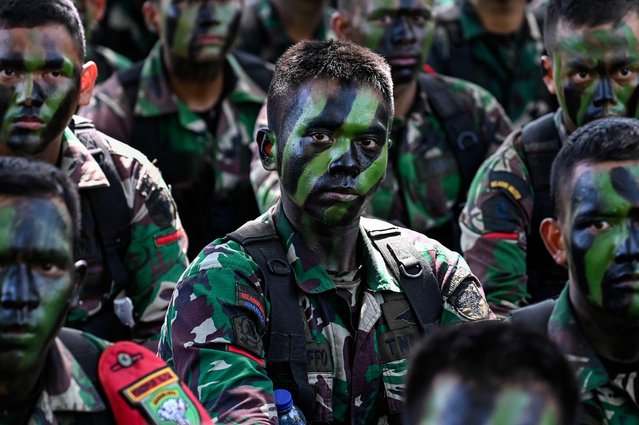 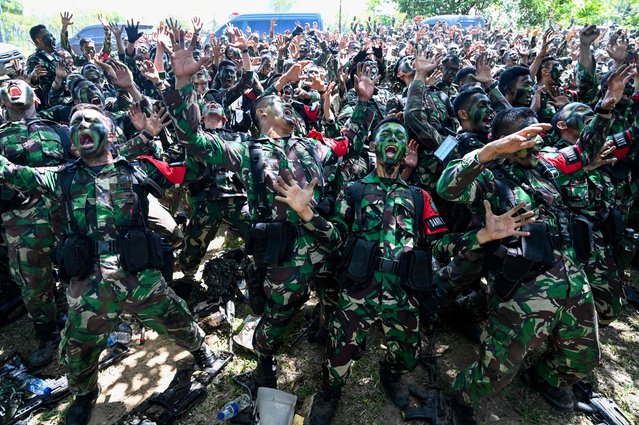 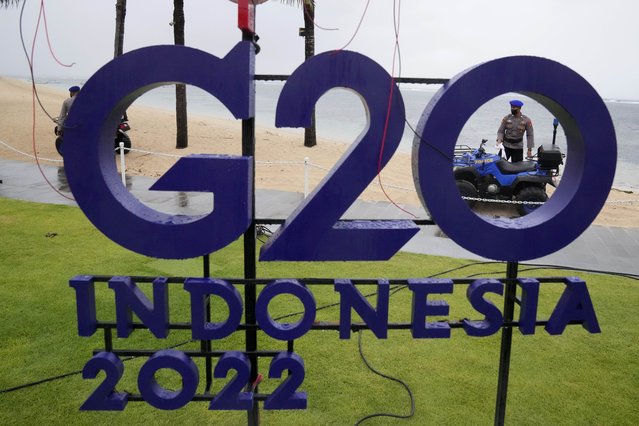 A police officer prepares an ATV for patrol ahead of the G20 Foreign Ministers' Meeting in Nusa Dua, Bali, Indonesia, Thursday, July 7, 2022. Foreign ministers from the Group of 20 leading rich and developing nations are gathering in Indonesia's resort island of Bali for talks bound to be dominated by the conflict in Ukraine despite an agenda focused on global cooperation and food and energy security. (Photo by Dita Alangkara/AP Photo) 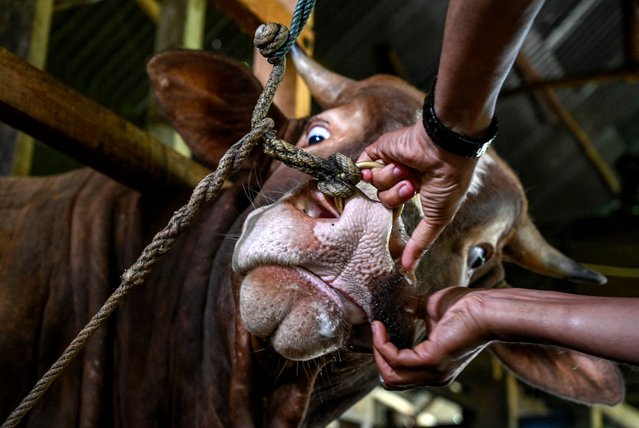 A veterinarian inspects a cow for foot-mouth-disease ahead of Eid al-Adha, the feast of the sacrifice marking the end of the Hajj pilgrimage to Mecca and commemorates Prophet Abraham's readiness to sacrifice his son to show obedience to Allah, at a cowshed in Lambaro, Aceh province on July 7, 2022. (Photo by Chaideer Mahyuddin/AFP Photo) 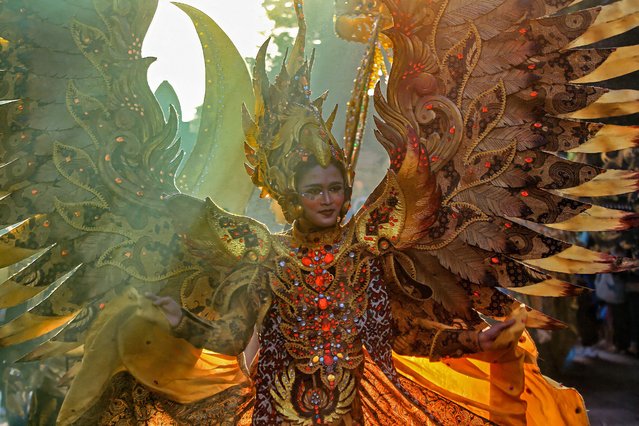 A model performs a costume during a Batik carnival as part of the G20 cultural event, in Solo on July 7, 2022. (Photo by Devi Rahman/AFP Photo) 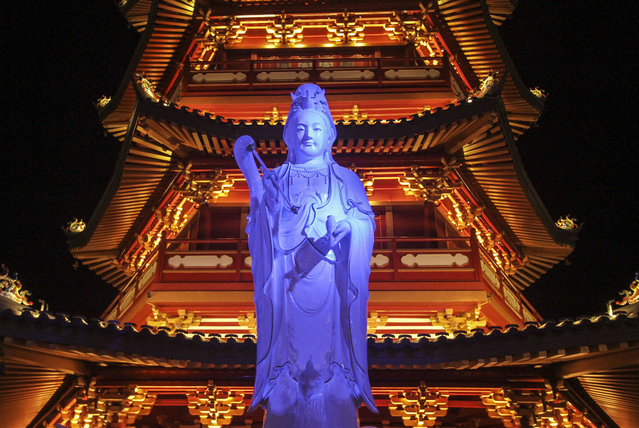 People visit the culinary market Panjoran Chinatown in Jakarta, Indonesia on July 8, 2022. Panjtoran Chinatown located on the coast of North Jakarta, this place is a typical Chinese culinary, even among food vendors that have been operating since 1925. The feel of Chinatown is so thick in places ranging from street art, typical Chinese gates, and statues of the God of Wealth, to various Chinese specialties. (Photo by Eko Siswono Toyudho/Anadolu Agency via Getty Images) 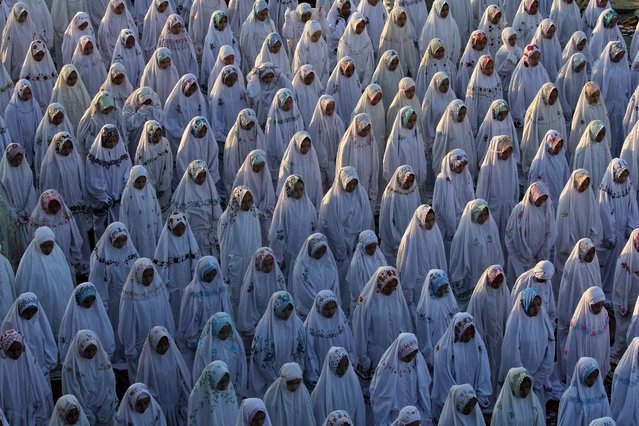 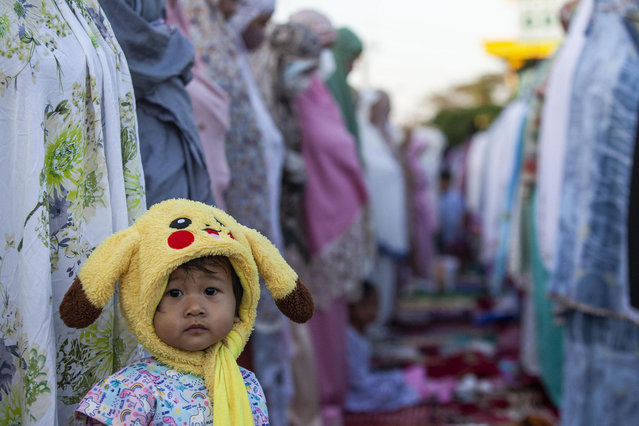 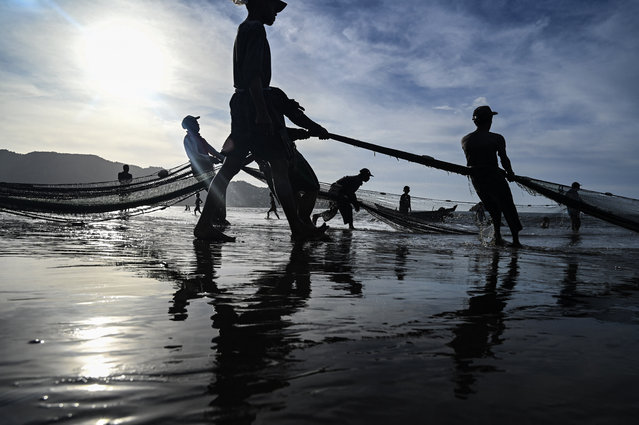 Fishermen pull their net to fish along the coast at a beach in Pekan Bada, Indonesia's Aceh province on July 17, 2022. (Photo by Chaideer Mahyuddin/AFP Photo) 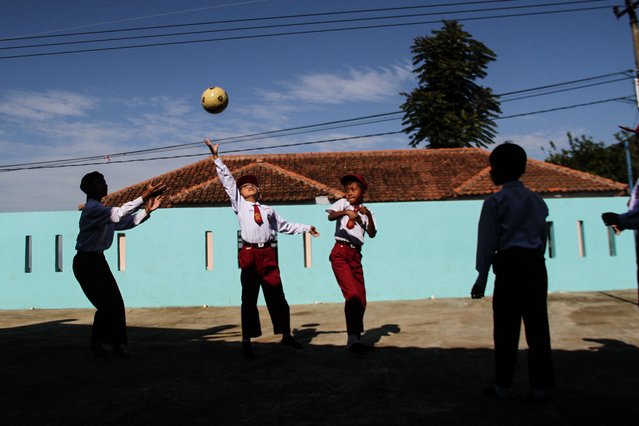 Students playing a ball on the first day of school at SDN Neglasari, Sumedang Regency on July 18, 2022. On the first day of school, students undergo an introductory period of the school environment filled with introductions between students, teachers, and the school environment in the new school year 2022/2023. (Photo by Algi Febri Sugita/ZUMA Press Wire/Rex Features/Shutterstock) 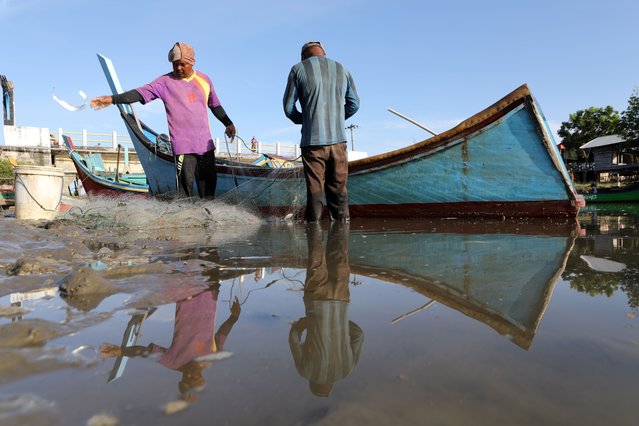 Traditional fishermen releasing fish from their nets after returning from fishing in the Lamdingin area, Aceh, Indonesia. 20 July 2022. Acehnese fishermen still rely on traditional fishing methods as a way to fulfill their daily needs and develop the economy of fishing communities in coastal areas. (Photo by Hotli Simanjuntak/EPA/EFE) 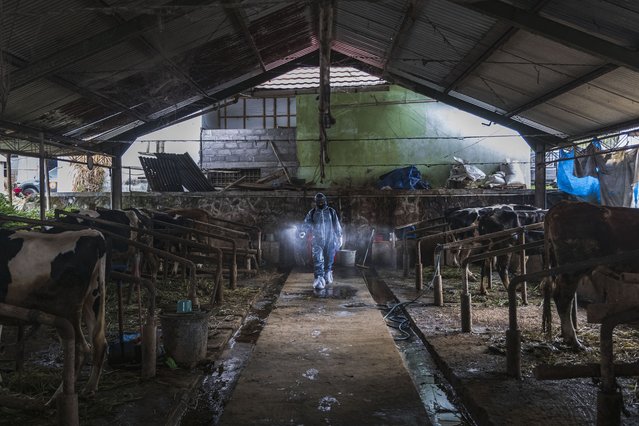 An officer sprays disinfectant on a cattle farm that has been infected with foot and mouth disease on July 22, 2022 in Yogyakarta, Indonesia. Indonesia is battling an outbreak of foot and mouth disease, a highly-contagious disease that affects hooved animals such as cows and pigs and threatens to devastate the livestock industry if not erradicated. (Photo by Ulet Ifansasti/Getty Images) 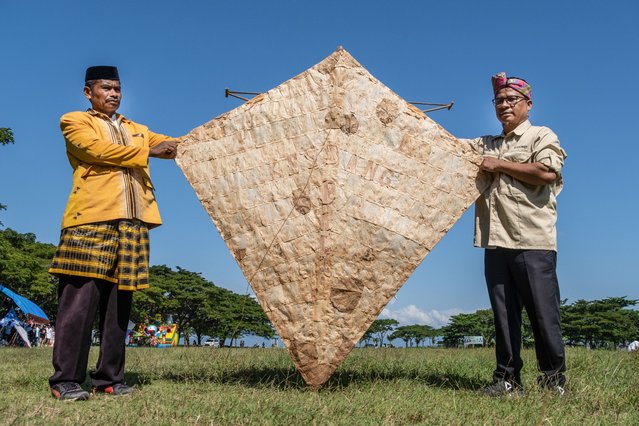 The owner of an ancient kite shows his kite before it is flown in in Raha, Indonesia on July 23, 2022. The Kaghati Kolope or ancient kite is the oldest kite in the world, aged 4 thousand years, based on historical discoveries found in one of the caves on the island of Muna, Southeast Sulawesi. All the constituent parts of this ancient kite are composed of materials derived from nature where the main ingredient is kolope leaves. (Photo by Andry Denisah/SOPA Images/Rex Features/Shutterstock) 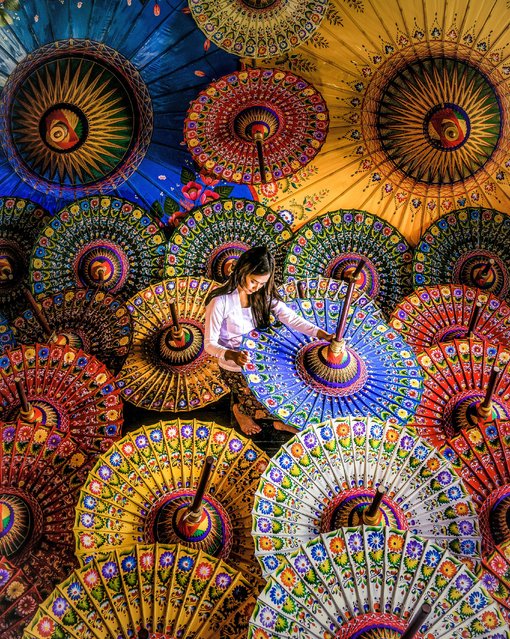 Traditional ornamental Juwiring umbrellas are painted by hand in Klaten, Indonesia in the last decade of July 2022. The function of this umbrella is for decoration and accessories in hotels, food stalls, home decoration or sold to tourists. (Photo by Soegeng Wibowo/Solent News) 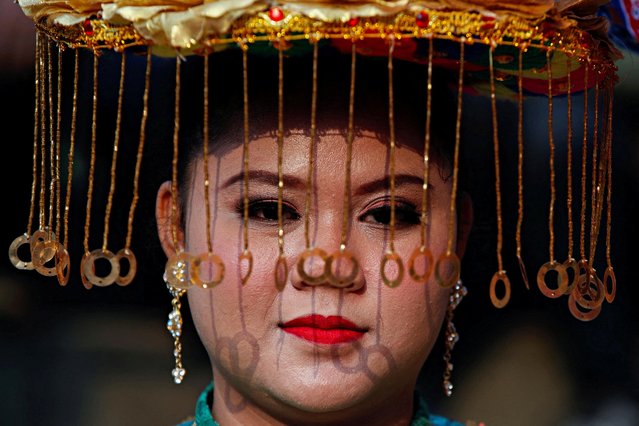 A traditional dancer looks on during her performance in Jakarta, Indonesia on July 26, 2022. (Photo by Ajeng Dinar Ulfiana/Reuters) 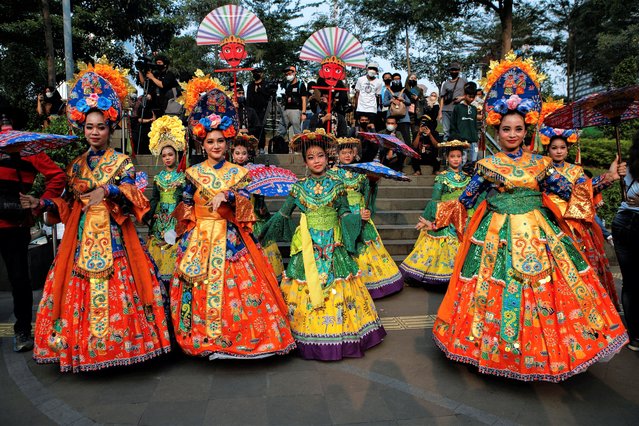 A traditional dance group performs on the sidewalk in Jakarta, Indonesia on July 26, 2022. (Photo by Ajeng Dinar Ulfiana/Reuters) 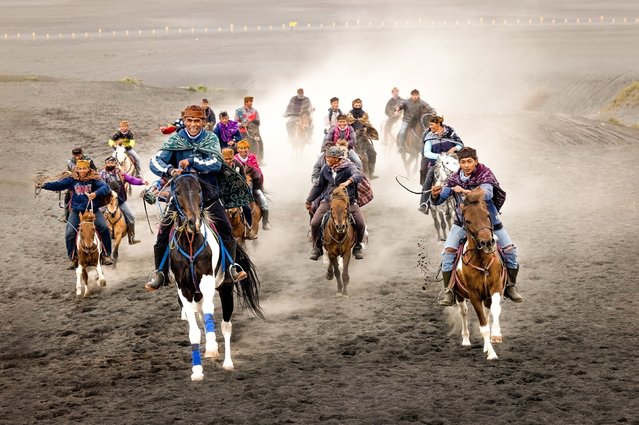 A dust cloud is created as natives ride on horseback through dry terrain. The horse riders were galloping up a hill of the Bromo Mountain in East Java, Indonesia, kicking up dust as they went on July 27, 2022. Lisdiyanto Suhardjo, 62, from Jakarta said, “The natives were riding to pick up a group of tourists from their vehicles who had just arrived in the area. The tourist will get 15 to 30 minutes ride on their visit. The men are natives of the land”. (Photo by Lisdiyanto Suhardjo/Solent News & Photo Agenc) 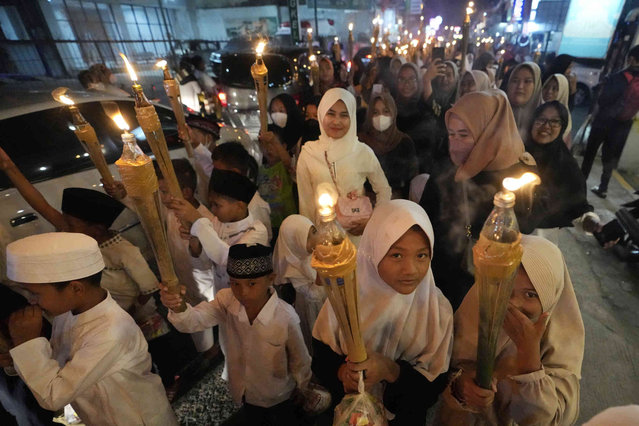 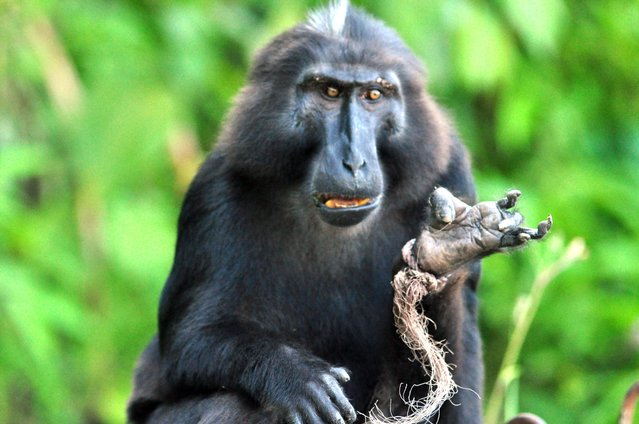