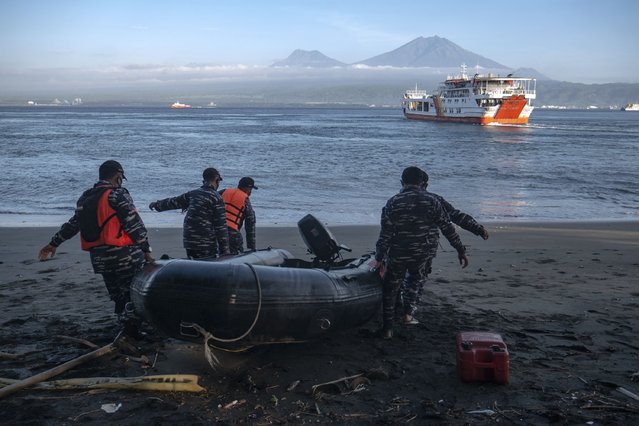 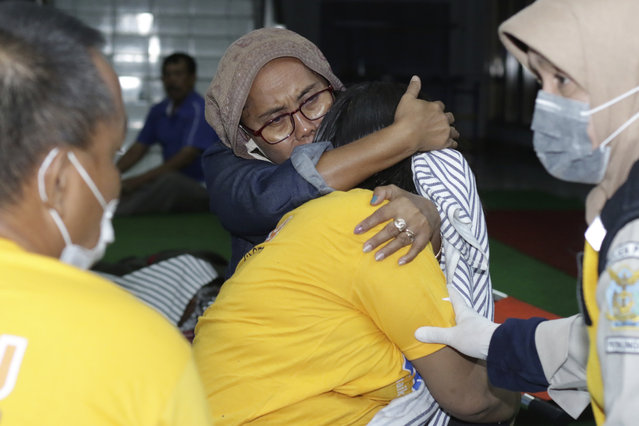 A relative embraces a survivor of the sinking ferry KMP Yunice at an evacuation point in Banyuwangi, East Java, Indonesia, early Wednesday, June 30, 2021. Rescuers searched into the night Tuesday for several missing people after the ferry sank in rough seas near Indonesia's resort island of Bali, killing a number of people, officials said. (Photo by AP Photo/Stringer) 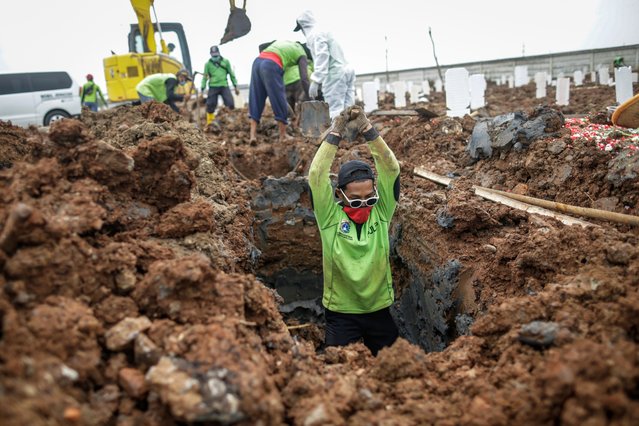 A worker wearing a protective face mask and sunglasses, prepares the grave during a funeral of a Covid-19 victim at a Covid-19 dedicated cemetery in Jakarta, Indonesia, 18 June 2021. Indonesia has intensified vaccination drives and social distancing measures amid the warning from the World Health Organization (WHO) over the increasing number of Covid-19 infection cases in the country. Indonesia has recorded more than 1,900,000 coronavirus disease (COVID-19) cases since the beginning of the pandemic. (Photo by Mast Irham/EPA/EFE) 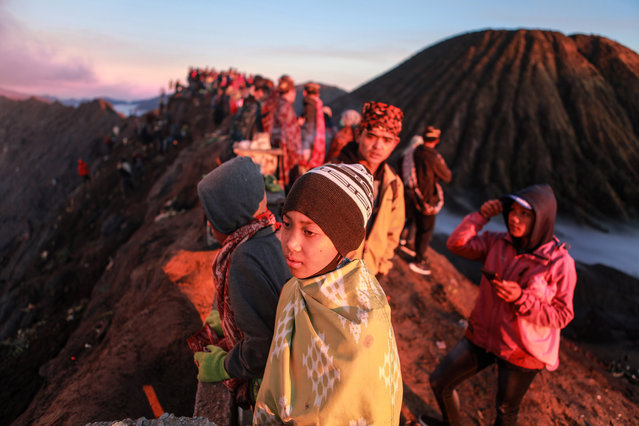 Tenggerese gather during the Yadnya Kasada Festival at crater of Mount Bromo amid the coronavirus pandemic on June 26, 2021. Tenggerese people are a Javanese ethnic group in Eastern Java who claimed to be the descendants of the Majapahit princess. Their population of roughly 500,000 is centered in the Bromo Tengger Semeru National Park in eastern Java. The most popular ceremony is the Kasada festival, which makes it the most visited tourist attraction in Indonesia. The festival is the main festival of the Tenggerese people and lasts about a month. On the fourteenth day, the Tenggerese made a journey to Mount Bromo to make offerings of rice, fruits, vegetables, flowers and livestock to throw them into the volcano's caldera. The origin of the festival lies in the 15th century princess named Roro, the principality of Tengger with her husband Joko Seger, and the childless couple asked mountain Gods for help in bearing children. The legend says the Gods granted them 24 children but on the provision that the 25th must be added to the volcano in sacrifice. The 25th child, Kesuma, was finally sacrificed in this way after an initial refusal, and the tradition of throwing sacrifices into the Caldera to appease the mountain Gods continues today. (Photo by Bayu Novanta/SOPA Images/Rex Features/Shutterstock) 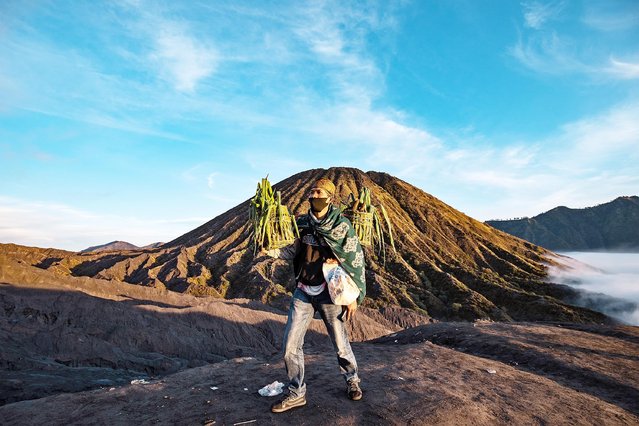 Indonesian Hindus Tenggerese worshippers with vegetable offerings passes through Mount Batok during the Yadnya Kasada ritual on June 26, 2021 in Probolinggo, Java, Indonesia. The Tenggerese people are an ethnic group in Eastern Java, Indonesia's most populous island, who believe themselves to be descendants of the Majapahit princes that ruled the area historically. Their population of roughly 500,000 is centered in the Bromo Tengger Semeru National Park in eastern Java. The ethnic group's most popular ceremony, the month-long Yadnya Kasada festival, was the most visited tourist attraction in Indonesia before the Covid-19 pandemic. On the fourteenth day, the Tenggerese make a journey to Mount Bromo to make offerings of rice, fruits, vegetables, flowers and even livestock and poultry, throwing them into the volcano's caldera. The ritual is thought to have started in the 15th century, when a local princess and her husband prayed to the mountain gods for help in having children. (Photo by Robertus Pudyanto/Getty Images) 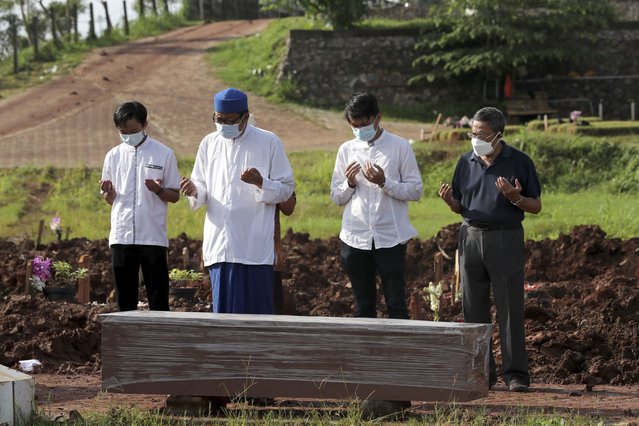 An Islamic cleric leads relatives in prayer during the burial of a man in the special section of Jombang Public Cemetery reserved for those who died of COVID-19, in Tangerang on the outskirts of Jakarta, Indonesia, Monday, June 21, 2021. Indonesia saw significant spikes in confirmed COVID-19 cases recently, an increase blamed on travel during last month's Eid al-Fitr holiday as well as the arrival of new virus variants, such as the the Delta version first found in India. (Photo by Tatan Syuflana/AP Photo) 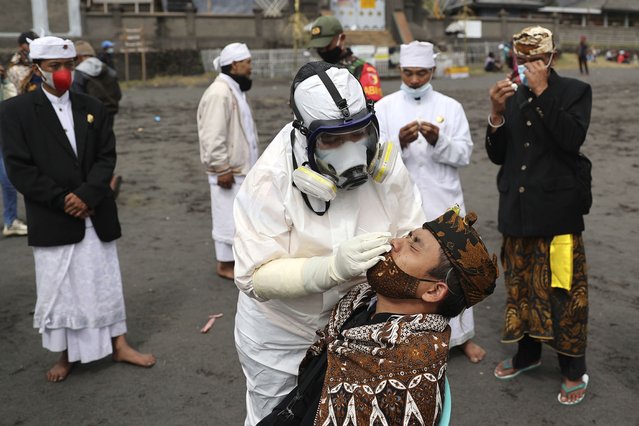 A Hindu devotee has his nasal swab sample collected by a medical worker to be checked for coronavirus before he takes part in the upcoming Yadnya Kasada festival, at Luhur Poten Temple at near Mount Bromo, Probolinggo, Indonesia, Friday, June 25, 2021. The Yadnya Kasada festival is where local Hindus gather to make offerings of rice, fruit, vegetables, livestock or money are made to gods at the active volcano to ask for blessings and assure a bountiful harvest. (Photo by Trisnadi/AP Photo) 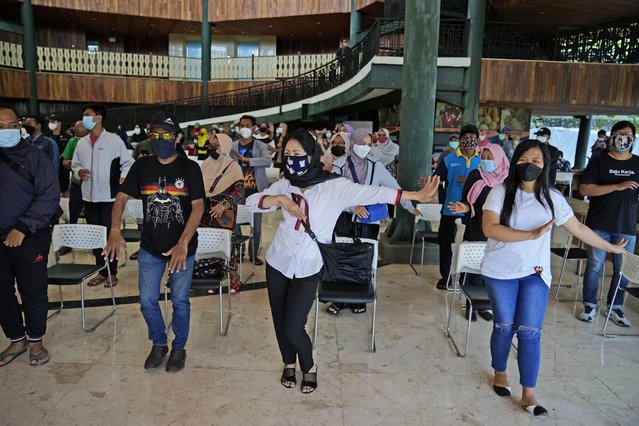 People dance to the music played by organizer while they wait to receive the Sinovac COVID-19 vaccine during a mass vaccination in Jakarta, Indonesia, Monday, June 21, 2021. Indonesia's president ordered authorities to speed up the country's vaccination campaign as the World Health Organization warned of the need to increase social restrictions in the country amid a fresh surge of coronavirus infections caused by worrisome variants. (Photo by Dita Alangkara/AP Photo) 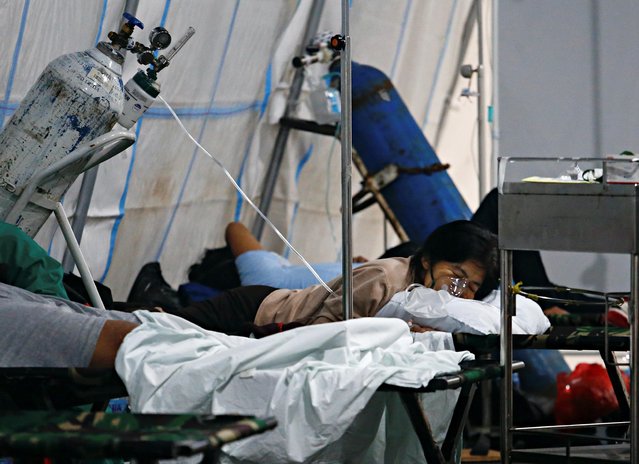 A patient suffering from coronavirus breaths with a non-rebreather mask in an emergency tent at a hospital in Jakarta, Indonesia, June 24, 2021. (Photo by Ajeng Dinar Ulfiana/Reuters) 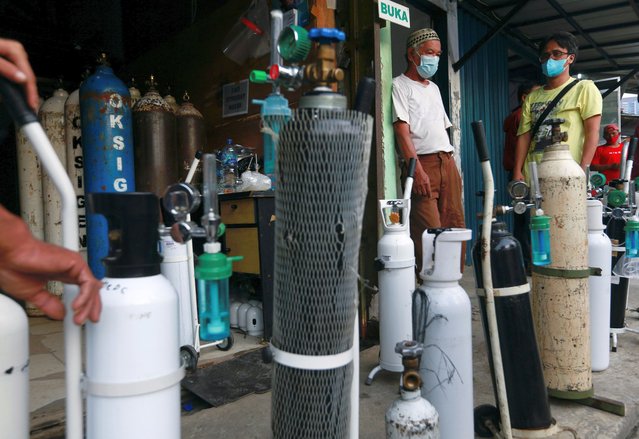 People wearing protective face masks stand with their oxygen cylinders outside a store to get them refilled, amid the coronavirus disease (COVID-19) outbreak in Jakarta, Indonesia, June 28, 2021. (Photo by Ajeng Dinar Ulfiana/Reuters) 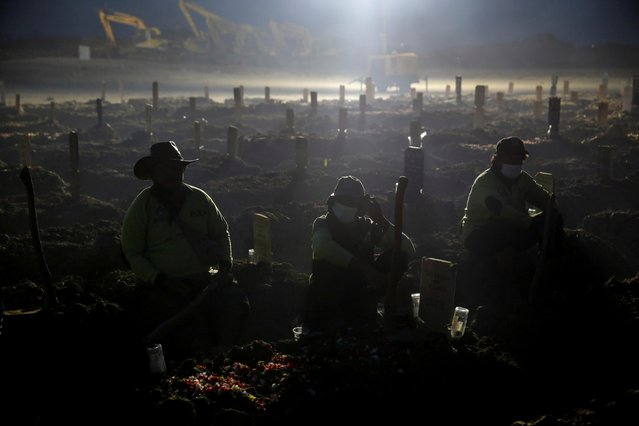 Gravediggers take a break as they work at the burial area provided by the government for coronavirus disease (COVID-19) victims, in Jakarta, Indonesia, June 28, 2021. (Photo by Willy Kurniawan/Reuters) 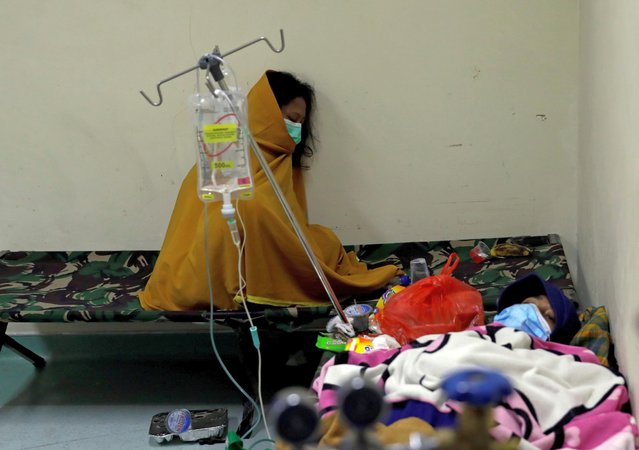 People rest on camp beds inside the emergency ward for coronavirus disease (COVID-19) patients at a government-run hospital in Jakarta, Indonesia, June 29, 2021. (Photo by Willy Kurniawan/Reuters) 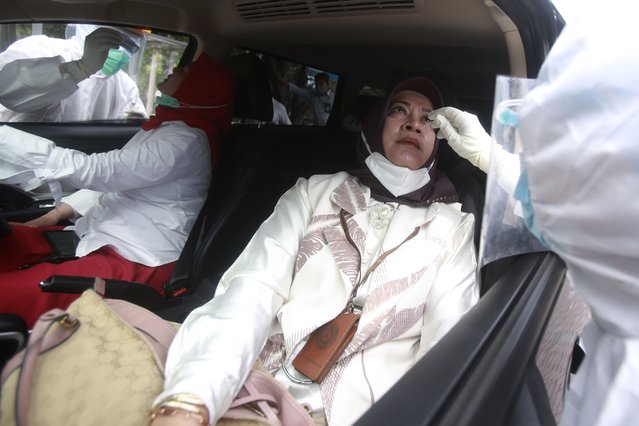 Women have their nasal swab samples taken to be tested for the coronavirus, during a COVID-19 screening at University of North Sumatra in Medan, Indonesia, Monday, June 21, 2021. Indonesia has reported more coronavirus cases than any other country in Southeast Asia. (Photo by Binsar Bakkara/AP Photo) 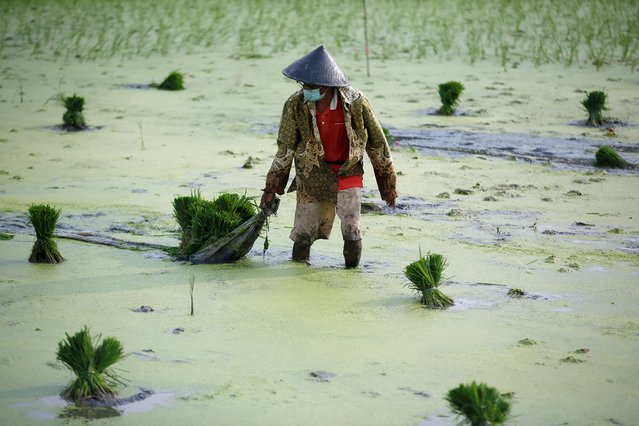 A farmer wearing a protective mask to curb the spread of coronavirus disease (COVID-19) works at a paddy field in Jakarta, Indonesia, June 28, 2021. (Photo by Willy Kurniawan/Reuters) 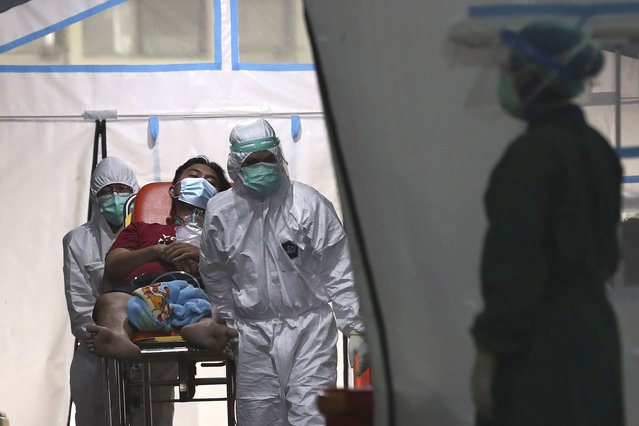 Medical workers use a stretcher to remove a man from an emergency tent erected to accommodate a surge of COVID-19 patients at Cengkareng Regional General Hospital in Jakarta, Indonesia,Thursday, June 24, 2021. The world's fourth most populous country, has seen COVID-19 infections surge in recent weeks, putting pressure on hospitals, including in the capital city, where most of hospital beds are full, and has added urgency to the government's plan to inoculate 1 million people each day by next month. (Photo by Tatan Syuflana/AP Photo) 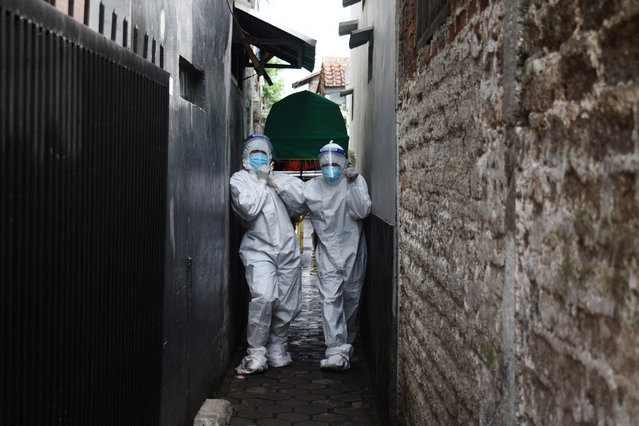 Health workers remove the body of a man who died of Covid-19 coronavirus at his Home in Bandung on June 23, 2021, as Indonesia's infection rates soar and hospitals are flooded with new patients, prompting warnings that the Southeast Asian nation's health crisis could spiral out of control. (Photo by Timur Matahari/AFP Photo) 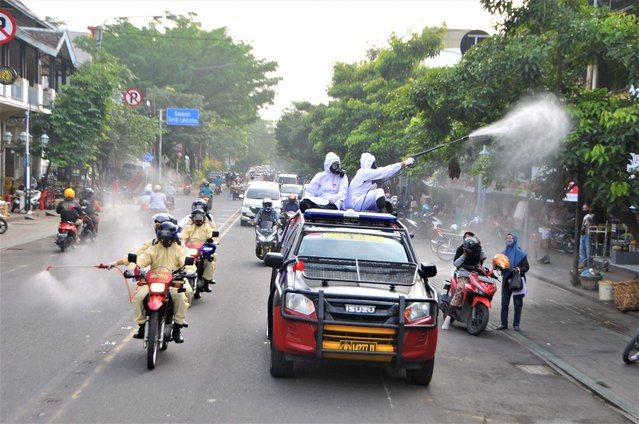 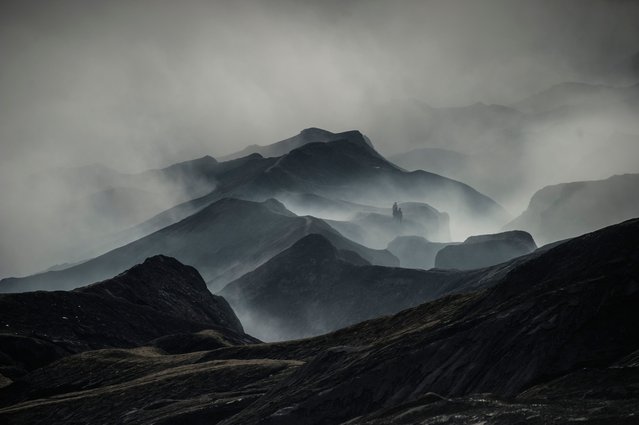 Tengger tribe people make their way to the summit of the active Mount Bromo volcano to make offerings in Probolinggo, East Java province on June 26, 2021, during the Yadnya Kasada festival to seek blessings from the main deity by presenting offerings of rice, fruit, livestock and other items. (Photo by Juni Kriswanto/AFP Photo) 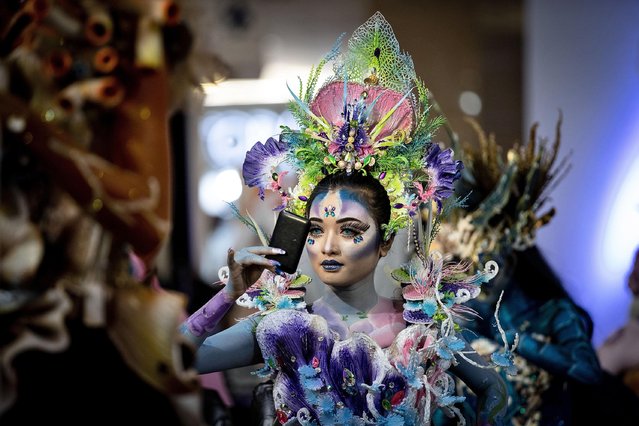