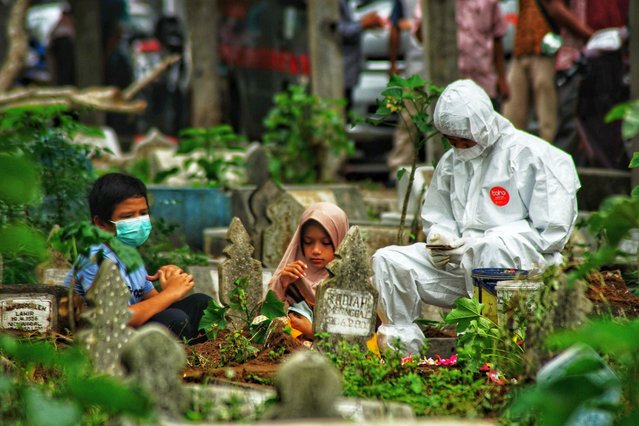 A family member in personal protective equipment (PPE) suit together with two children pray by the grave of a Covid-19 coronavirus victim who was just buried, as family members defying health protocols gather nearby at a cemetery in Lhokseumawe, Aceh on May 18, 2021. (Photo by Azwar Ipank/AFP Photo) 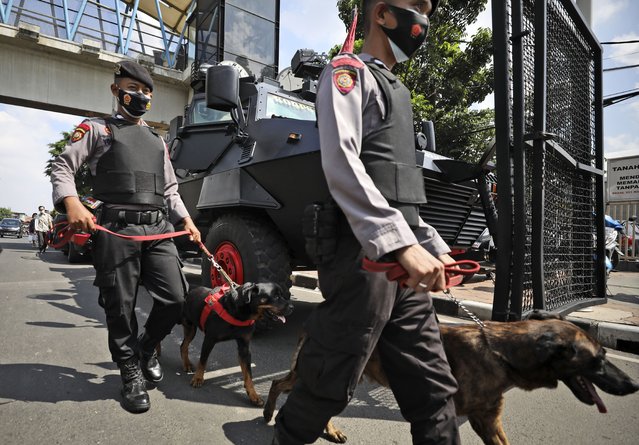 Members of the police K-9 unit lead sniffer dogs past an armored vehicle as they patrol outside the East Jakarta District Court where the sentencing hearing of firebrand cleric Rizieq Shihab is held in Jakarta, Indonesia, Thursday, May 27, 2021. Judges are scheduled to deliver their verdict on the trial of Shihab, the leader of now-banned Islam Defenders Front, who was accused of inciting people to breach pandemic restrictions by holding events attended by thousands of supporters to commemorate Prophet Muhammad's birthday and the wedding of his daughter in November last year. (Photo by Dita Alangkara/AP Photo) 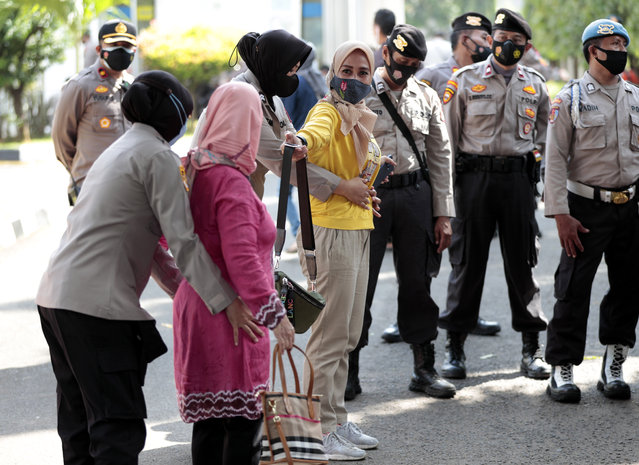 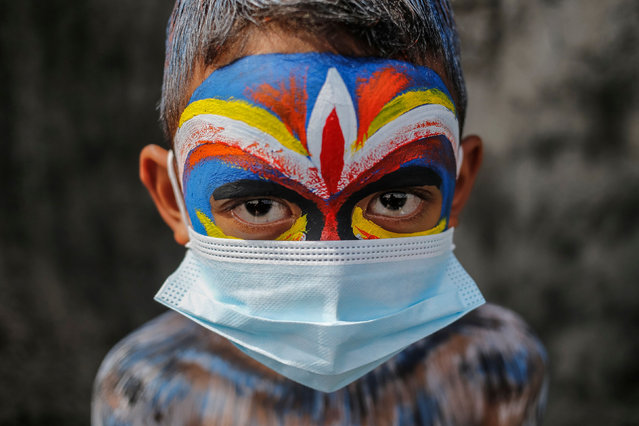 Balinese have their bodies painted and wears protective mask during sacred Ngerebeg ritual amid COVID-19 pandemic at Tegallalang Village in Gianyar, Bali, Indonesia on May 19 2021. Ngerebeg is a sacred ritual held every six month which is believed to expel bad luck and evil spirits. The participants decorates their bodies with colourful paints and accessories to symbolise astral beings while marching across the village. (Photo by Johanes Christo/NurPhoto/Rex Features/Shutterstock) 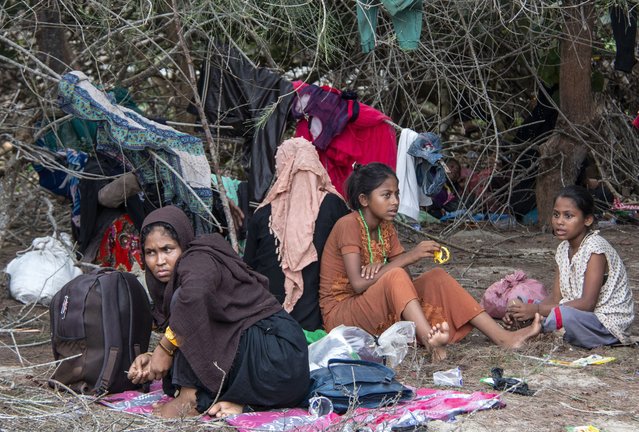 Ethnic Rohingya people rest on a beach after their boat was stranded on Idaman Island in East Aceh, Indonesia, Friday, June 4, 2021. Villagers in Indonesia's Aceh province discovered a stranded boat carrying dozens of Rohingya Muslims, including children, who had left a refugee camp in Bangladesh, officials said. (Photo by Zik Maulana/AP Photo) 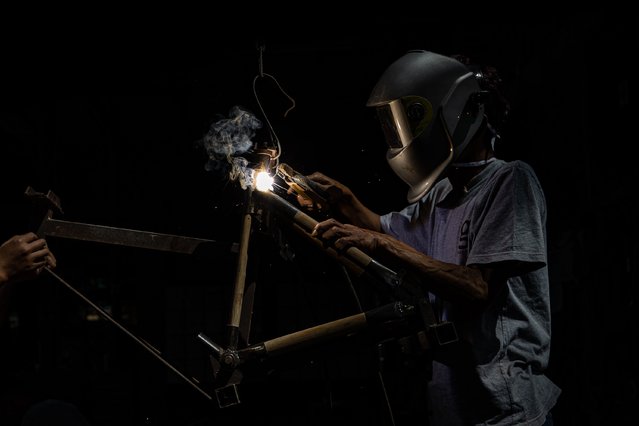 A worker welds Spedagi frame at Piranti Works workshop on June 02, 2021 in Temanggung, Indonesia. The Spedagi Bamboo Bike takes advantage of the light weight and durability of bamboo. It has the best vibration dampening characteristics for a bike and local materials are easy to get as bamboo grows very fast. The bike design uses giant bamboo (Dendrocalamus asper) for its abundance in the local area around the village, its large diameter, and its thick walls which makes it possible to create bicycle frame tubes of a uniform size. Singgih Susilo Kartono, Spedagi’s creator, hopes not only to build a unique bike that uses natural materials, but to start a revitalization movement that he hopes will empower the village as a sustainable and self-sufficient community. Spedagi bikes are widely used in France, Japan, and large Indonesian cities such as Jakarta, where cycling is gaining popularity as an alternative to sitting in vehicles for hours on traffic-choked roads. Spedagi won the Bronze Award in Hong Kong DFA Design for Asia Awards 2017, the Japan Good Design Gold Award 2018, Excellent Product Design in German Design Award Special 2019, and has passed the vibration fatigue impact test by the Japan Vehicle Inspection Association (JVIA). (Photo by Robertus Pudyanto/Getty Images) 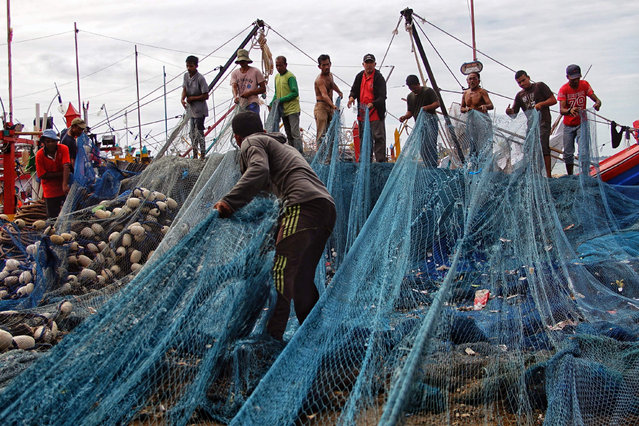 Fishermen gather to repair their nets as high waves prevent them from going out to sea at a fishing village in Lhokseumawe, Aceh on May 28, 2021. (Photo by Azwar Ipank/AFP Photo) 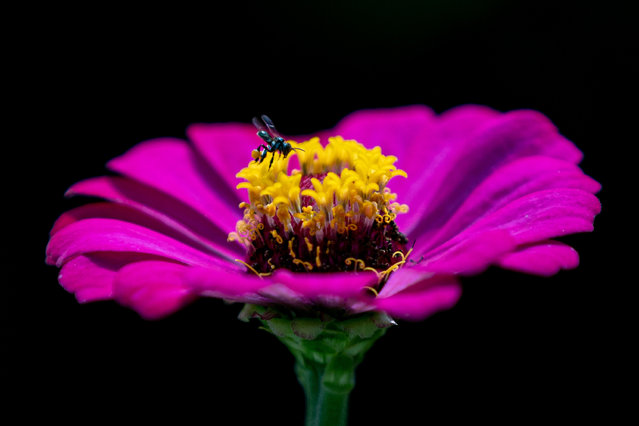 A Trigona sucks nectar of a flower at Rimba Raya bee farm on May 20, 2021 in Lawang, Java, Indonesia. Honey demand in Indonesia has significantly increased, as people buy more of it for its perceived benefits for health. Proponents say it has numerous benefits, such as for the immune system. Bees, aside from producing honey, also play a key part in the pollination of flowering plants, spreading pollen as they flit from plant to plant in search of nectar. (Photo by Robertus Pudyanto/Getty Images) 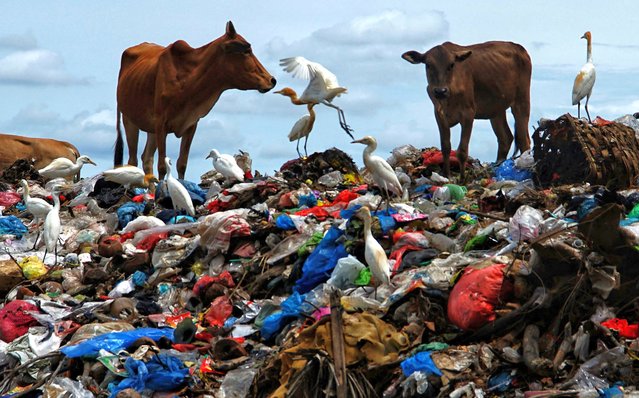 Cows and seagulls feed on trash collected after the Eid al-Fitr holidays, at the Alue Liem landfill in Lhokseumawe, Aceh on May 17, 2021. (Photo by Azwar Ipank/AFP Photo) 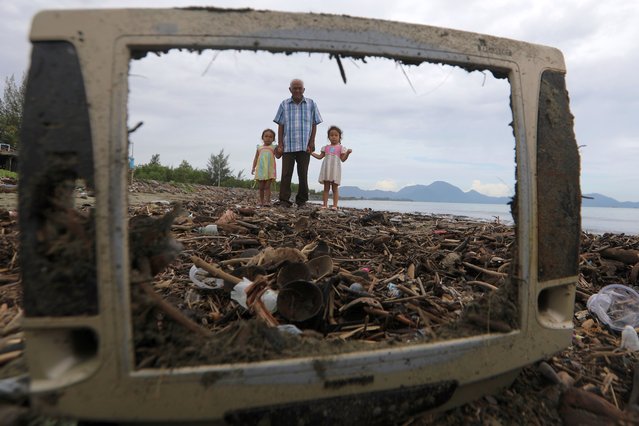 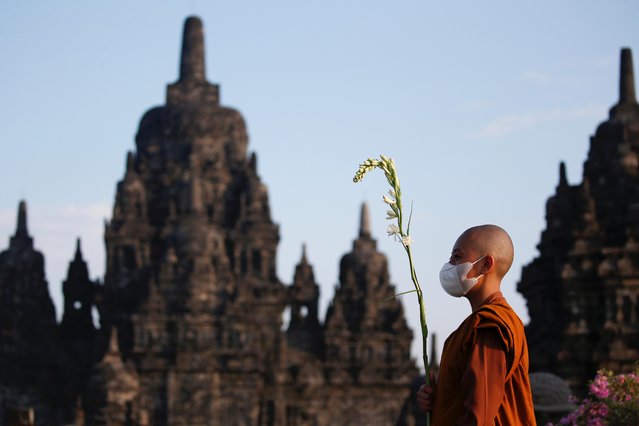 A Buddhist monk wearing a protective mask walks around the Sewu temple during the celebrations of Vesak Day, marking the birth, enlightenment and death of Buddha, amid the coronavirus disease (COVID-19) pandemic in Sleman, Yogyakarta, Indonesia, May 26, 2021. (Photo by Willy Kurniawan/Reuters) 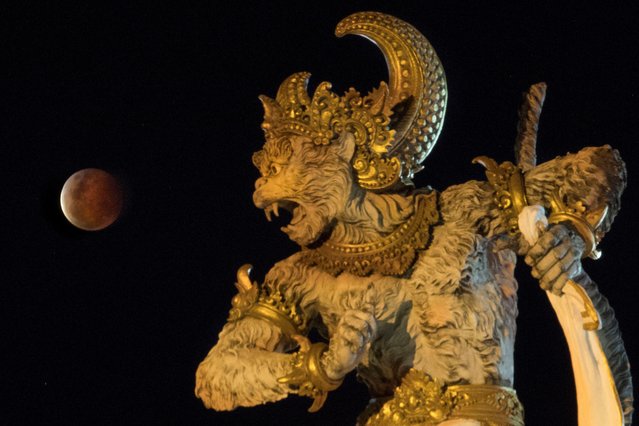 The full moon, known as “Super Blood Moon”, rises over the Titi Banda park in Denpasar, Bali, Indonesia on May 26, 2021. (Photo by Nyoman Budhiana/Antara Foto via Reuters) 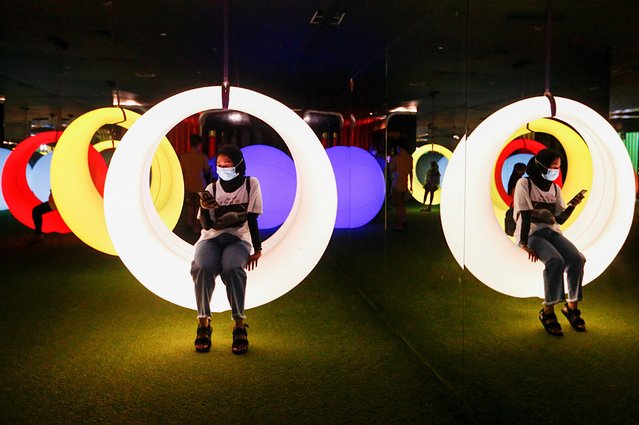 A woman wearing a protective face mask sits on the round lamp at Trans Studio, amid the coronavirus disease (COVID-19) outbreak, in Jakarta, Indonesia, June 1, 2021. (Photo by Ajeng Dinar Ulfiana/Reuters) 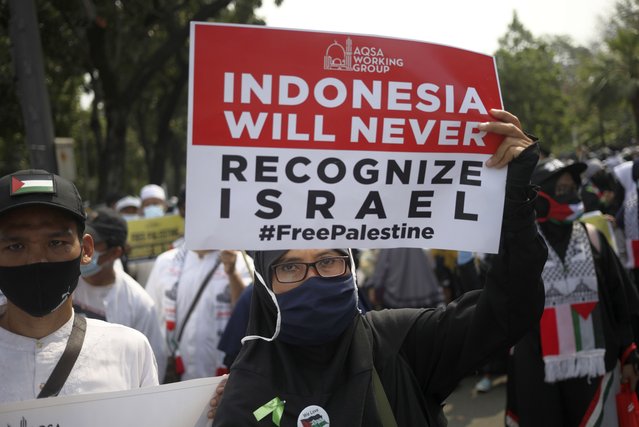 A Muslim woman holds up a poster during a rally against Israel's attacks on Gaza, outside the U.S. Embassy in Jakarta, Indonesia, Friday, May 21, 2021. (Photo by Dita Alangkara/AP Photo) 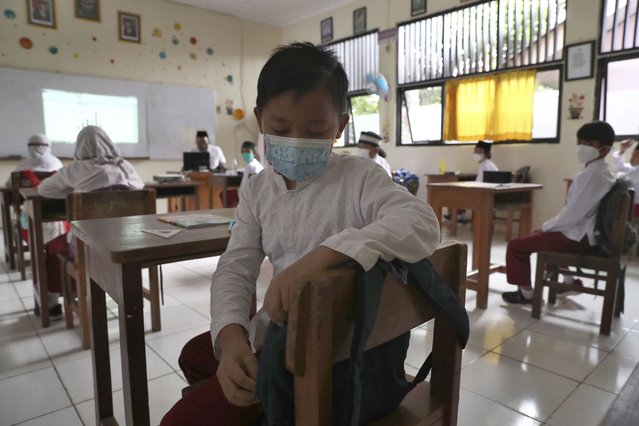 Students wearing face masks sit spaced apart during a trial run of a class with COVID-19 protocols at an elementary school in Jakarta, Indonesia, Friday, June 4, 2021. The world's fourth-most populous country, with about 275 million people, has reported more coronavirus cases than any other Southeast Asian country. (Photo by Tatan Syuflana/AP Photo) 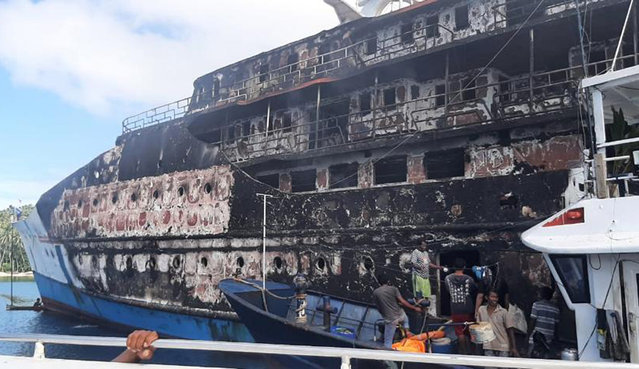 This Saturday, May 29, 2021, photo released by the National Search and rescue Agency (BASARNAS), rescuers inspect the wreckage of KM Karya Indah ferry after it caught fire off Limafatola Island, Indonesia. The ferry in eastern Indonesia caught fire early Saturday with nearly 200 people on board, forcing passengers and crew to jump into the sea but causing no casualties, officials said. (Photo by BASARNAS via AP Photo) 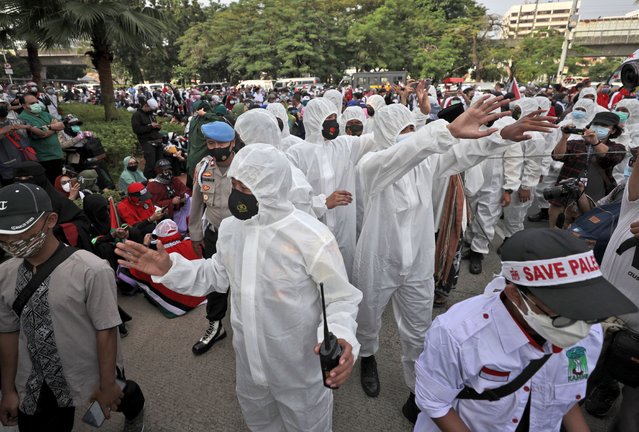 Police officers in protective suits gesture towards protesters to maintain their physical distance to help curb the spread of the coronavirus during an anti-Israel rally outside the U.S. Embassy in Jakarta, Indonesia, Tuesday, May 18, 2021. Pro-Palestinian protesters marched to the heavily guarded embassy on Tuesday to demand an end to Israeli airstrikes in the Gaza Strip. (Photo by Dita Alangkara/AP Photo) 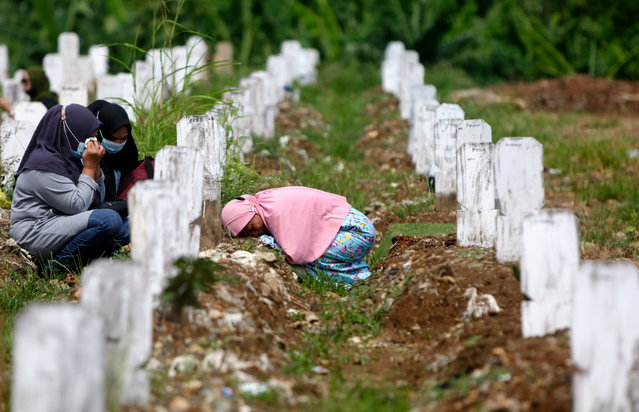 A woman cries before her husband's grave at a cemetery for victims of COVID-19 in Jakarta, Indonesia, 17 May 2021. The Jakarta government allowed residents toresume visits to the city's Public Cemetery on 17 May amid the ongoing coronavirus pandemic. (Photo by Adi Weda/EPA/EFE) 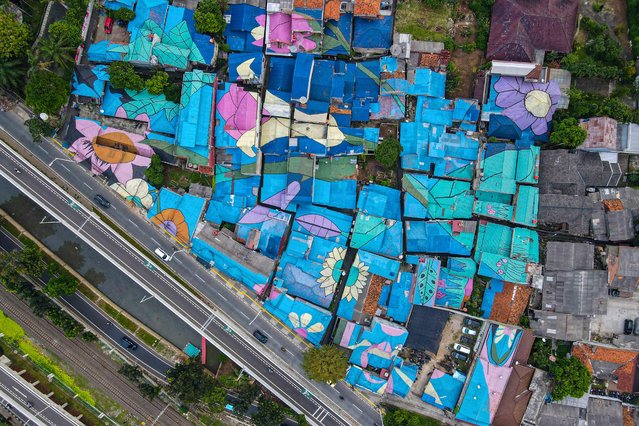