This picture taken on June 15, 2019 shows Indonesian customs officers from the local environment office examining one of 65 containers full of imported plastic rubbish, at the Batu Ampar port in Batam. Indonesia returned five other containers of rubbish to the United States and will not become a “dumping ground”, officials said on June 15, the latest Southeast Asian country to return imported waste. (Photo by Andaru/AFP Photo) 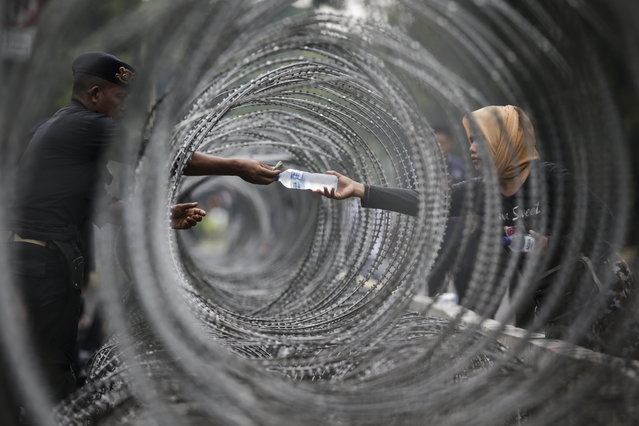 An Indonesian police officer buys a bottle of water through razor wire as he stands guard outside the Constitutional Court in Jakarta, Indonesia, 14 June 2019. Indonesia's authorities tightened security as trial hearings started in court to challenge the results of the presidential election. (Photo by Mast Irham/EPA/EFE) 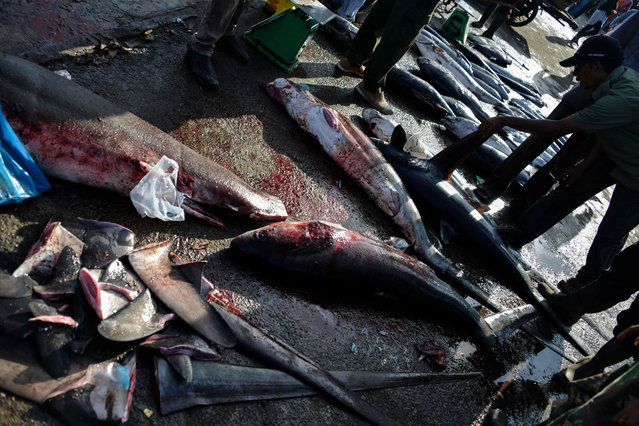 A man checks the fin of a thresher shark at a fishing port in Banda Aceh, Indonesia on June 13, 2019. (Photo by Chaideer Mahyuddin/AFP Photo) 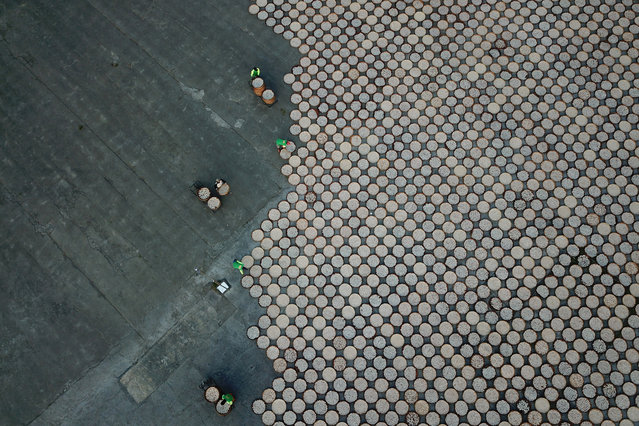 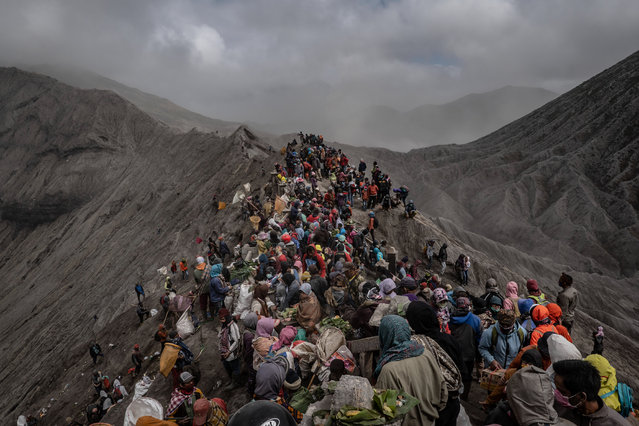 Tenggerese gather at crater of Mount Bromo during the Yadnya Kasada Festival on July 18, 2019 in Probolinggo, East Java, Indonesia. Tenggerese people are a Javanese ethnic group in Eastern Java who claimed to be the descendants of the Majapahit princes. Their population of roughly 500,000 is centered in the Bromo Tengger Semeru National Park in eastern Java. The most popular ceremony is the Kasada festival, which makes it the most visited tourist attraction in Indonesia. The festival is the main festival of the Tenggerese people and lasts about a month. On the fourteenth day, the Tenggerese made a journey to Mount Bromo to make offerings of rice, fruits, vegetables, flowers and livestock to throw them into the volcano's caldera. The origin of the festival lies in the 15th century princess named Roro, the principality of Tengger with her husband Joko Seger, and the childless couple asked mountain Gods for help in bearing children. The legend says the Gods granted them 24 children but on the provision that the 25th must be added to the volcano in sacrifice. The 25th child, Kesuma, was finally sacrificed in this initial after refusal, and the tradition of throwing sacrifices into the Caldera to appease the mountain Gods continues today. (Photo by Ulet Ifansasti/Getty Images) 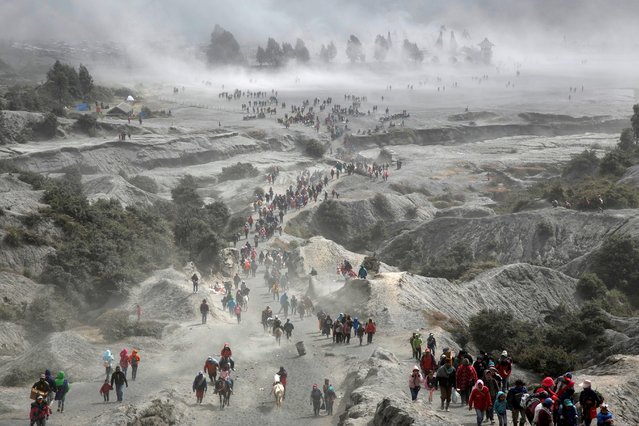 Tenggerese people and tourists gather near the Bromo volcano during the annual Kasada ceremony where Hindu worshippers had a ritual with throwing offerings such crops and livestock into the crater as thanks giving to their gods, in Probolinggo, East Java province, Indonesia, July 18, 2019. (Photo by Rizki Dwi Putra/Reuters) 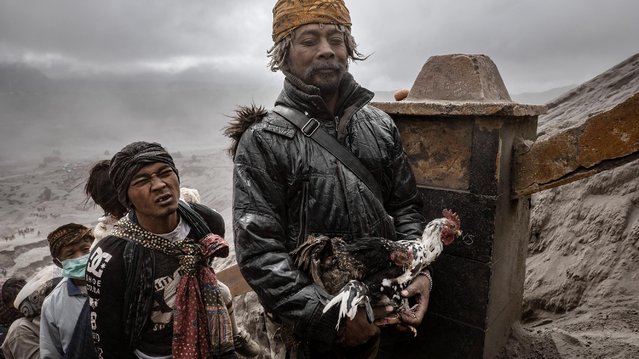 Tenggerese carries chickens as offerings during the Yadnya Kasada Festival at crater of Mount Bromo on July 18, 2019 in Probolinggo, Java, Indonesia. Tenggerese people are a Javanese ethnic group in Eastern Java who claimed to be the descendants of the Majapahit princes. (Photo by Ulet Ifansasti/Getty Images) 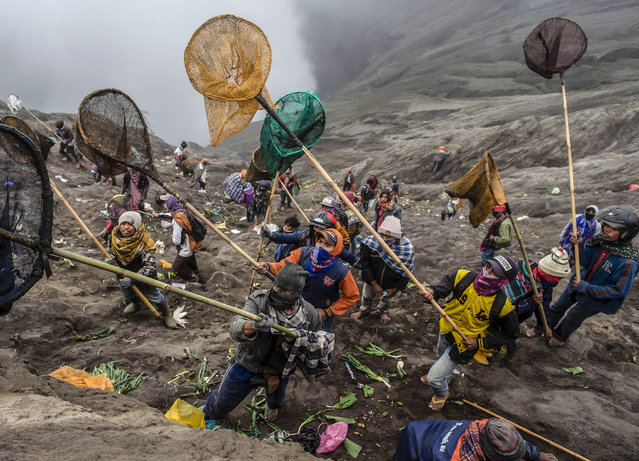 People try to catch offerings thrown off the summit of Mount Bromo volcano by Tengger tribe members and local tourists in Probolinggo, East Java province on July 18, 2019, as part of the Yadnya Kasada Festival. During the annual Yadnya Kasada festival, the Tenggerese climb Mount Bromo, an active volcano, and seek the blessing from the main deity by presenting offerings of rice, fruit, livestock and other items. (Photo by Juni Kriswanto/AFP Photo) 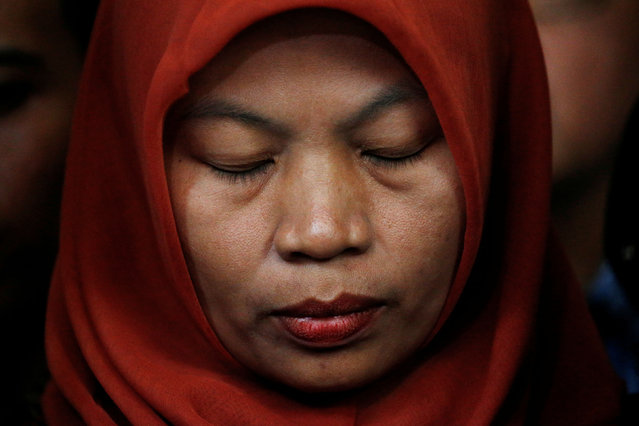 Baiq Nuril Maknun, a teacher on the island of Lombok who was jailed after she tried to report sexual harassment, reacts during a press conference with Indonesia's Law and Human Rights Minister Yasonna Laoly in Jakarta, Indonesia, July 8, 2019. (Photo by Willy Kurniawan/Reuters) 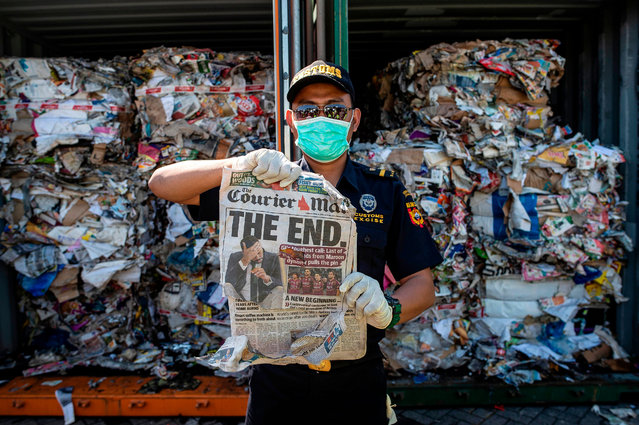 An Indonesian customs officer holds up a newspaper from a container filled with trash originating from Australia, which should have contained only waste paper, but authorities also found hazardous material and household trash, at a port in Surabaya on July 9, 2019. Indonesia said July 9 it would send more than 210 tonnes of garbage back to Australia, as Southeast Asian nations push back against serving as dumping grounds for foreign trash. (Photo by Juni Kriswanto/AFP Photo) 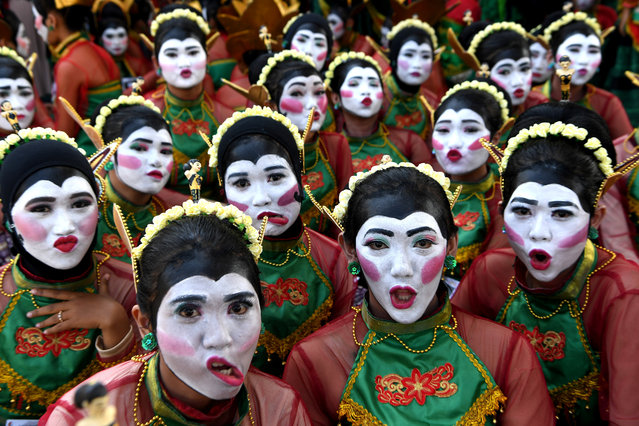 Dancers reacts to camera before they perform a Thengul dance during a festival in Bojonegoro, East Java province, Indonesia, July 14, 2019. (Photo by Zabur Karuru/Antara Foto via Reuters) 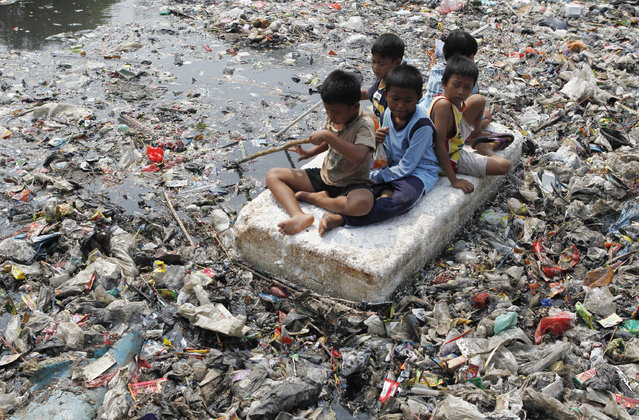 Children sitting on a makeshift raft play in a river full of rubbish in a slum area of Jakarta on September 19, 2012. (Photo by Enny Nuraheni/Reuters) 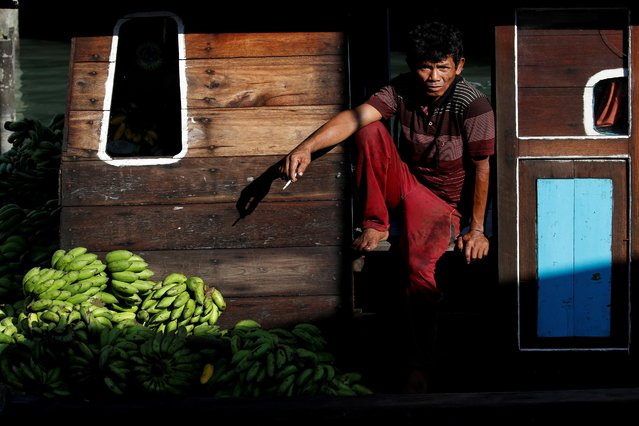 A man sits on the deck of a wooden ship in Tanjungpinang, on the island of Bintan, Indonesia, June 15, 2019. (Photo by Willy Kurniawan/Reuters) 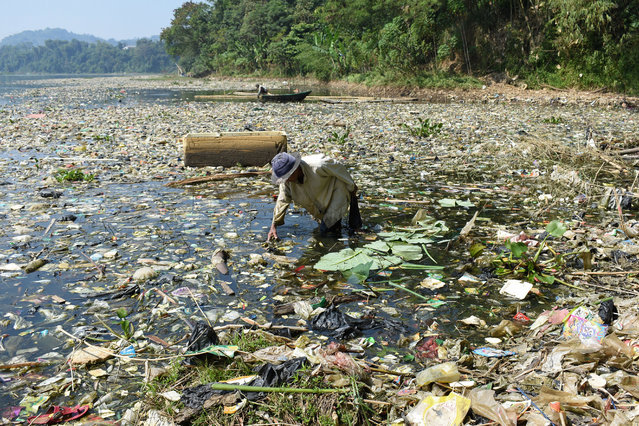 A scavenger collects plastic waste for recycling on the Citarum river choked with garbage and industrial waste, in Bandung, West Java province on June 26, 2019. The river, one of the world's most polluted after decades of failed clean-up efforts, in 2018 was earmarked for revitalisation by Jakarta to make its water drinkable again by 2025. (Photo by Timur Matahari/AFP Photo) 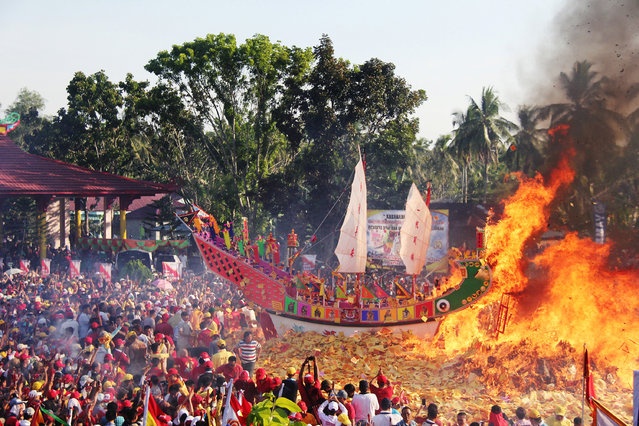 Konghucu worshippers gather as they attend the Bakar Tongkang ritual in Bagansiapiapi, Riau province, Indonesia, June 19, 2019 in this photo taken by Antara Foto. (Photo by Aswaddy Hamid/Antara Foto via Reuters) 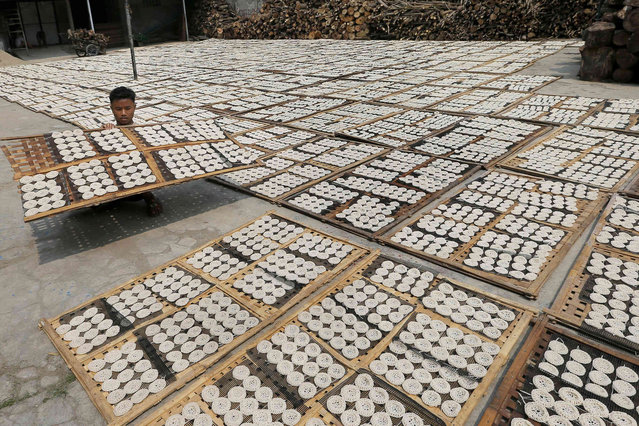 A worker dries crackers before frying at a home factory on the outskirts of Jakarta, Indonesia, Friday, June 21, 2019. (Photo by Tatan Syuflana/AP Photo) 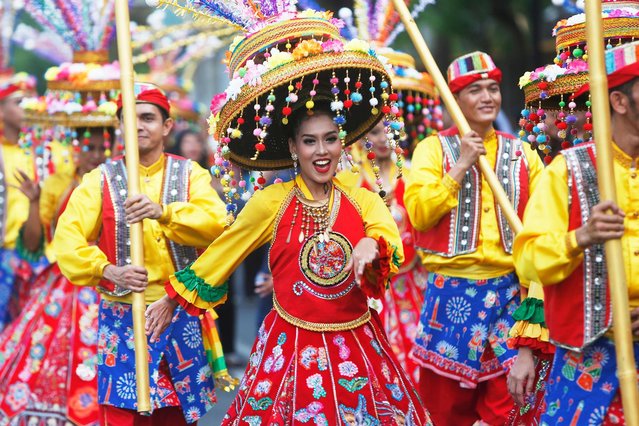 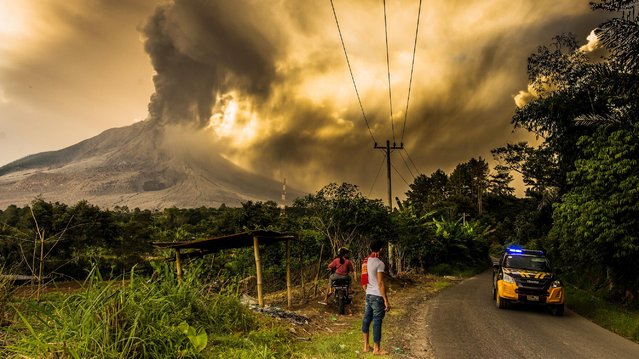 A view from Gajah Village as Mount Sinabung Eruption spewing ash volcanic to the sky, on June 09, 2019 in Karo, Indonesia. The Indonesian Geological Agency of the Ministry of Energy and Mineral Resources (KESDM) has reduced the activity level of Mount Sinabung in Karo Regency, North Sumatra. The level drops from Level IV (Caution) to Level III (Standby). Decrease in the activity level of Mount Sinabung stated by the Geological Agency (KESDM) in letter number 948/45 / BGL.V / 2019, on May 2019. (Photo by Tibta Pangin/Anadolu Agency/Getty Images) 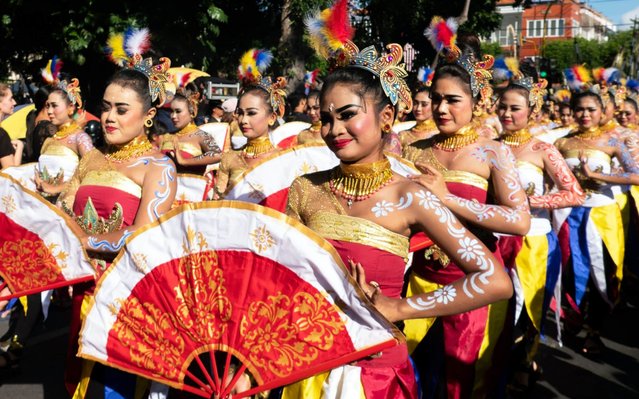 Dancers take part in a parade to mark the opening of the annual Bali Art Festival on a main road in Denpasar, Bali, Indonesia, 15 June 2019. The Bali Art Festival runs from 15 June to 14 July and features hundreds of local and international performers. (Photo by Made Nagi/EPA/EFE/Rex Features/Shutterstock) 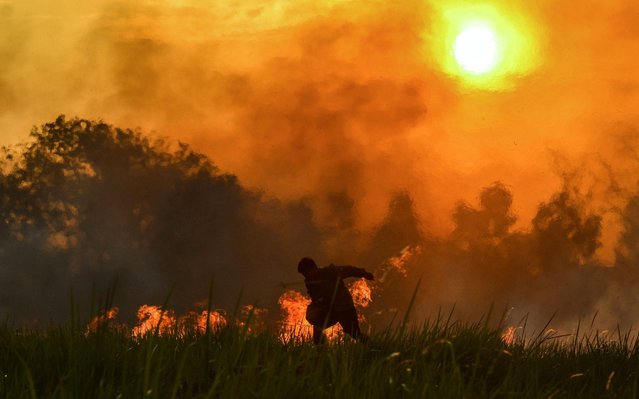